It’s a sad day when not only people in the ACLU call for banning Abigail Shrier’s book Irreversible Damage: The Transgender Craze Seducing our Daughters, but then the American Booksellers Association, self-described as “dedicated to free expression”, grovels to the mob and apologizes for sending out Shrier’s book in a batch of sample books dispatched to 750 bookstores.

First, though, let’s refresh you on Chase Strangio, the ACLU staff attorney in charge of gender issues, who emitted two tweets asking for “stopping the book’s circulation.” That’s a call for censorship. Here are the tweets.

And of course we’ve talked a bit about Shrier’s book, which I’ve just read. It is neither transphobic nor full of hate; it simply raises issues connected with “rapid onset gender dysphoria” (ROGD), an exponentially increasing condition among adolescent girls in which they decide they want to be boys and, with the help of compliant parents, therapists, and doctors (and often without proper vetting) begin taking puberty blockers and then have hormonal and often surgical treatment. Shrier’s point was that this phenomenon may partly stem from social-media pressure and the valorization of being “trans”, which brings you attention you wouldn’t get if you simply declared yourself a lesbian. It may often be associated with mental illness, and in many cases may go away on its own.  Further, ROGD is often not treated according to rigorous standards promoted by some medical associations.

Shrier’s point, and that of Jesse Singal, whom we discussed yesterday, is that we have little data on the form of gender dysphoria which comes on quickly in adolescent girls (it’s much rarer in boys), and before we go injecting hormones and cutting, we need much more extensive medical and psychological data. Shrier’s book is valuable because it calls attention to a phenomenon that needs attention, and should promote not only discussion, but the necessary research.  Shrier’s book is thus a valuable contribution to a discussion.

But many trans activists don’t want that discussion. Like Chase Strangio, they want Shrier’s book banned, arguing that simply bringing up the issue is itself a case of “transphobia.” That’s as far from the truth as you can get, for if you read Irreversible Damage, you’ll see that Shrier is sympathetic to the plight of transsexual people and only wants to ensure that those with ROGD are treated properly.

Strangio isn’t the only one who is deeply offended by Shrier’s book. As Sykes reports:

After receiving two Twitter complaints, Target stopped selling the book (a decision they later reversed . . . and then reversed again). Hundreds of Amazon employees signed a petition demanding the company stop selling the book.

And yes, I just checked the Target site; Shrier’s book, once reinstated, has now been eliminated again. But it’s still on Amazon, where it’s selling like hotcakes.

Which brings us to the American Bookseller’s Association (ABA). According to Charlie Sykes’s column, which you can read for free below (click on the screenshot), the ABA is dedicated, as all such associations should be, to free expression. Yet the story of the ABA and Shrier’s book belies that promise (read more details in the story at Publisher’s Weekly).

Here’s the ABA statement noted by Sykes, and it still appears on the ABA’s webpage (click on screenshot):

Well, they didn’t adhere to these principles of free expression after booksellers who received Shrier’s book in their sample box pushed back HARD.  Here’s what Publisher’s Weekly reports:

At Brooklyn’s Greenlight Bookstores, book buyer Casey Morrissey was the first person in the store to open the box. Morrissey shared their reactions on Twitter, and other booksellers quickly joined in, echoing their comments.

@ABAbook I’m seething. I was excited to open our July white box, and then the first book I pulled out is “Irreversible Damage.” Do you know how that feels, as a trans bookseller and book buyer? It isn’t even a new title, so it really caught me in the gut. Do better. pic.twitter.com/VYb1ZKrv9A

And there was this (from PW):

Among booksellers, however, there was little disagreement about the content of the book. “As longtime @ABAbook members with beloved staff across the gender spectrum, we’re extremely disappointed and angered to see the ABA promoting dangerous, widely discredited anti-trans propaganda, and we’re calling for accountability,” the Harvard Book Store wrote on Twitter.

No, Shrier’s book is neither dangerous nor “widely discredited.” So much for the Harvard Bookstore.

After a few reactions like this, the ABA issued a groveling apology. Get a load of this: 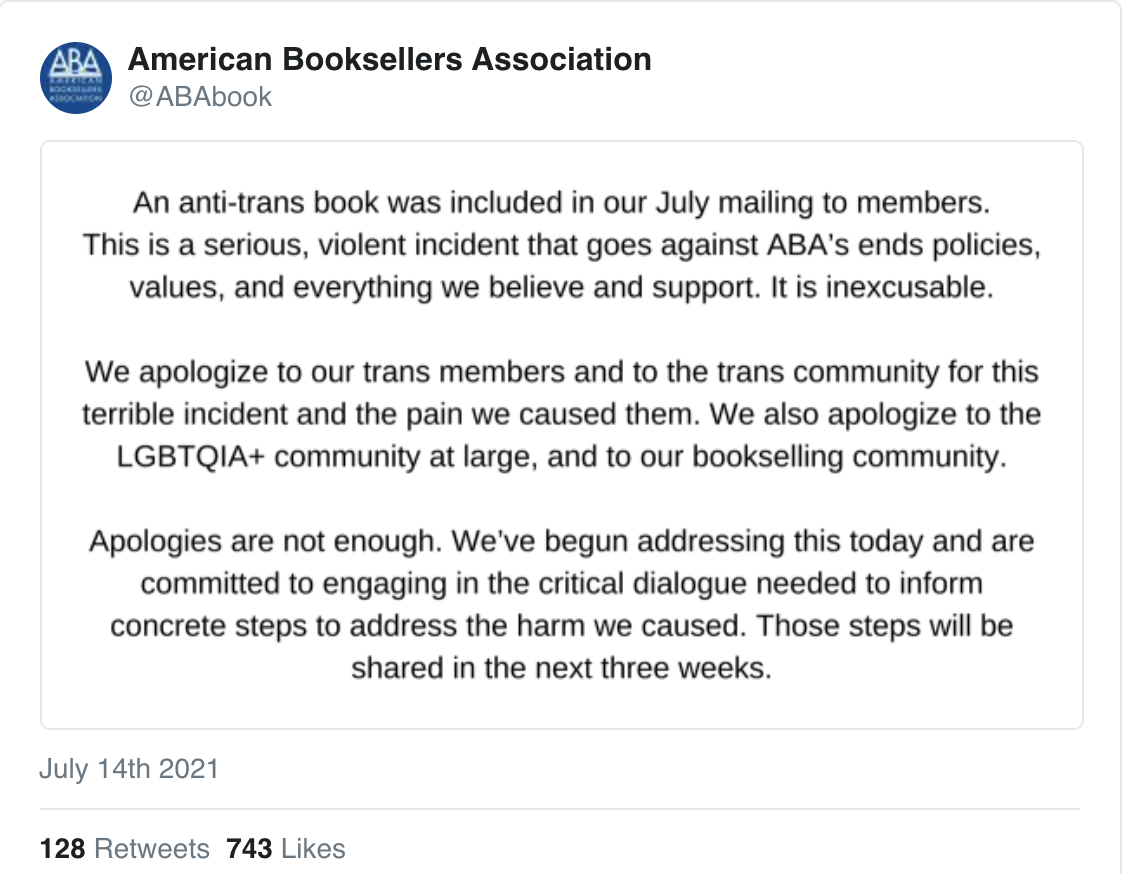 The “anti-trans” book was Shrier’s. Note how the ABA (which itself has now restricted its tweets), notes that merely sending out the book was a “serious, violent incident”. No it wasn’t: there was no violence involved, and sending it out did not violate the ABA policies. It’s absolutely pathetic that the ABA has to grovel and mewl like this. The debasing of the word “violence”, making a peaceful act sound warlike, continues.

But of course apologies are never good enough for the Woke, which suggests that you should never apologize for something you did if you were expressing your honest views. Here’s what Publisher’s Weekly adds:

But booksellers said the statement fell short, calling out the organization’s use of the passive voice in the opening sentence. They also demanded greater transparency about how the decision to include the book was initially made, and called for demonstrable steps to restore trust with trans book workers and authors. Some called on the ABA to offer promotions for trans authors’ books at no cost.

ABA Diversity, Equity, and Inclusion committee member Luis Correa, who works as a bookseller at Avid Bookshop in Athens, Ga., was first made aware of the issue when fellow booksellers emailed him Morrissey’s tweet. Correa identifies as a queer, Latino, and fat-bodied person, and said he thought the apology was flawed.

“I’m disappointed with the use of the passive language at the beginning of the statement and the shift in blame. They really should say that ‘we included this book,’” Correa said. The DEI Committee is comprised of ABA member booksellers and does not consult on the selections for the white boxes.

They don’t like the passive voice in the first sentence, apparently wanting the ABA to say “WE included an anti-trans book in our July mailing to members”!  Now the wording of apologies has to be perfect as well!

There were further apologies. From PW:

Separately, the ABA board of directors, all of whom are booksellers, weighed in with an email to members.

“These incidents harmed booksellers, ABA board members, and ABA staff who identify as LGBTQIA+ and/or BIPOC, as well as the wider community. They also added to a toxic culture overall,” they wrote. “We are not the ABA of two years ago. These actions are antithetical to the values we are working to promote in our organization under the strong leadership of our CEO, Allison Hill, and COO, Joy Dallanegra-Sanger. This is not acceptable behavior and goes against the bylaws changes instituted last year.”

**********
UPDATE: The ABA, as reader Coel notes below, has issued a second and even more cringeworthy apology. It’s unbelievable; have a look: 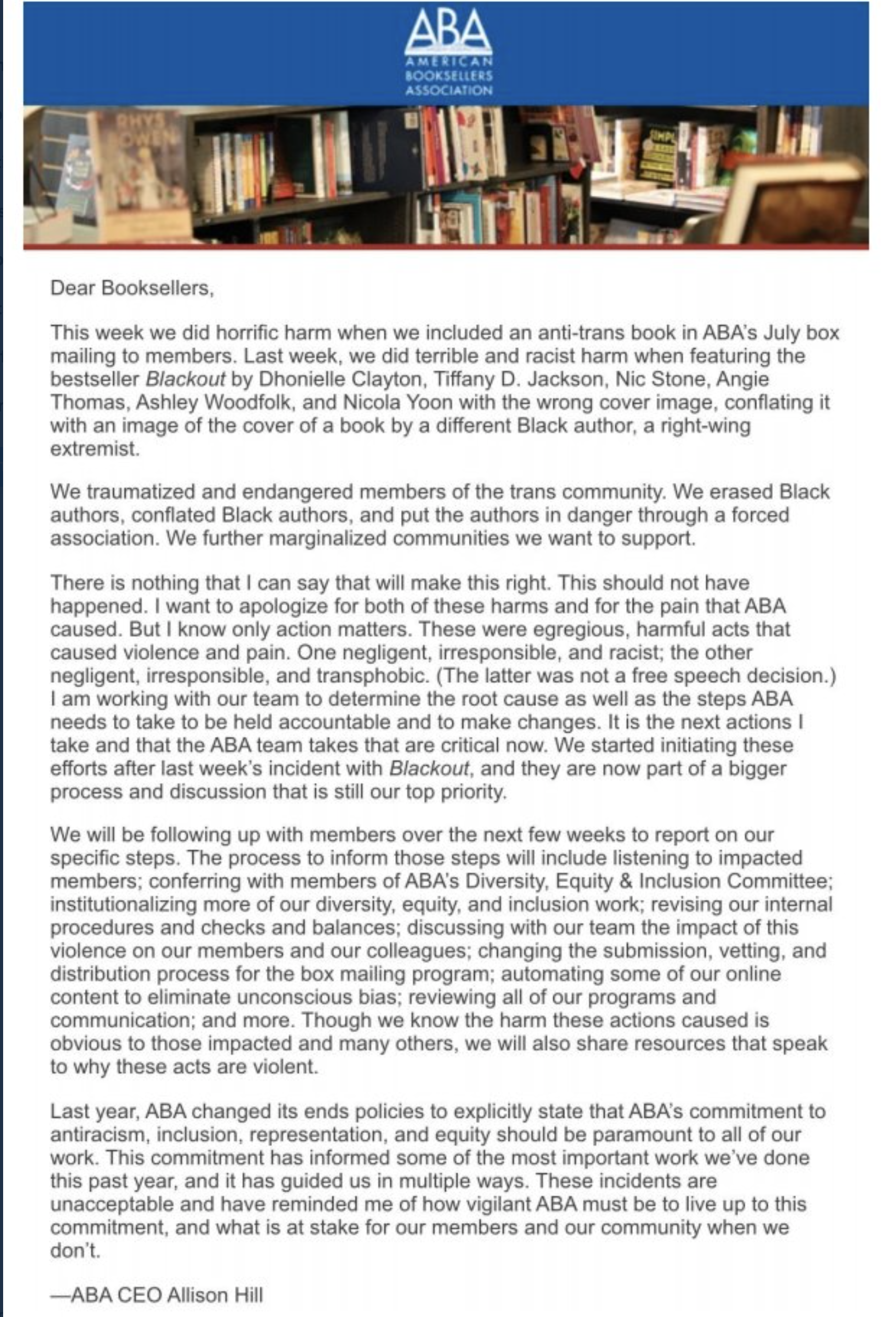 “Horrific harm”? “Traumatized and endangered members of the trans community.” How, exactly, did people get endangered?

No, nobody was “harmed.” People might have been offended, but damaged? I doubt it. And, as Stephen Fry points out repeatedly, being offended is not an argument; it’s an emotion.

Apparently the “new” ABA is in favor of restricting free expression.

But there are some who still stood up for free expression on Twitter. One of them was, of course, Shrier herself, though the tweet she references is now hidden. I do take some satisfaction in feeling that all this brouhaha about Irreversible Damage can only be good for Shrier by getting people to read her book. It’s a literary Streisand Effect, and shows why campaigns like the ABA’s are ineffectual. The book is now #75 on Amazon, and it’s been out for over a year. 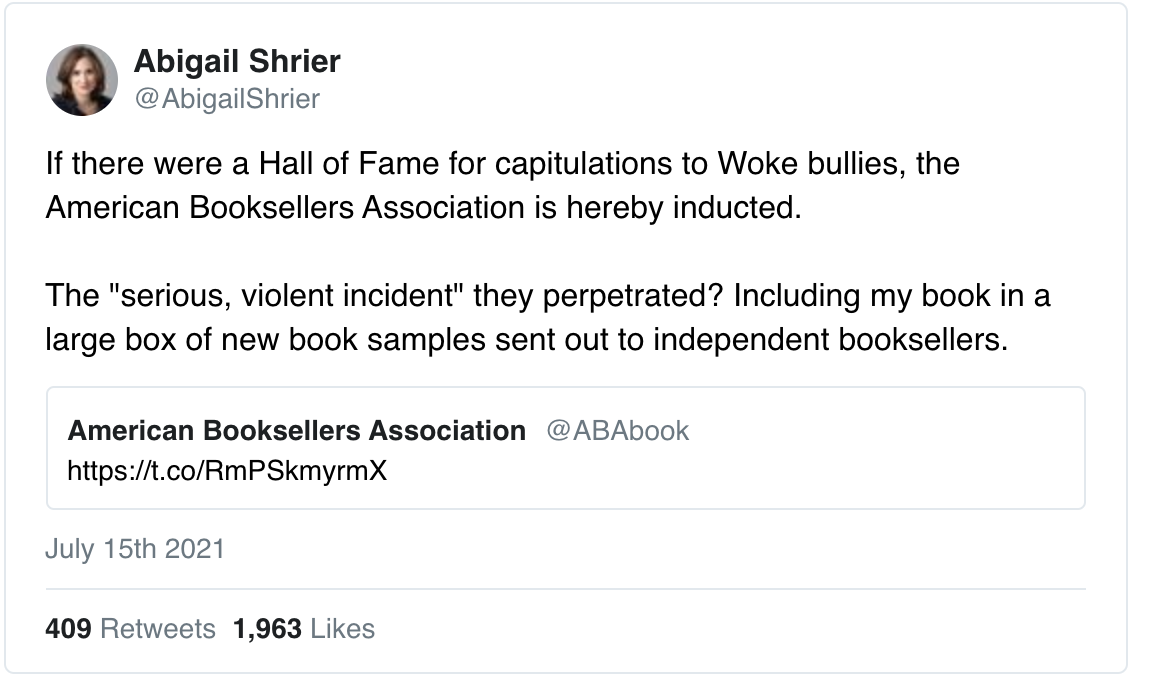 And a few more gems reproduced by Sykes:

Books are violence, so says the American Violencesellers Association

Did you run around smacking people over the head with said book?
Did you tape people's eyes open and force them to read?
Did you tie people down and read quotations aloud to them?

If No, then it's not violence.
It's a BOOK!!
And people can choose to read it or not.

Interesting statement…”mailing to members…serious, violent incident”. Is FedEx, UPS, or the USPS an accessory to this violent act? Are they liable for any injuries?

Beyond dumb world we live in these days

But this is my favorite:

Thank you. I accidentally bought this violent book. UPS left it on my doorstep, and when I got home, it beat the crap out of me. 😠

30 thoughts on “The American Booksellers Association apologizes for mailing out Abigail Shrier’s book, calling it a “serious, violent incident””