We have a short Caturday felid today, comprising three videos.

Dean Schneider is a Swiss entrepreneur who engages in wildlife rescue. In this video, an apparently friendly lion still stalks him, but it’s all in fun. DO NOT TRY THIS AT HOME!

From the San Diego Union Tribune we have an article about this amazing digital billboard in Japan. It’s not advertising anything; the creators merely wanted to make people feel good. And apparently it does. From the story:

Ryoko Kikuchi was strolling home from a Tokyo movie theater when she saw a cat the size of a yacht strutting high above the sidewalk, coyly licking its paws.

“The way it was meowing was too cute to bear,” she said.

A lot of people in Tokyo feel the same way, no matter that the cat is just a bunch of pixels on a billboard. The 4K display does not officially “open” until Monday, but it has already drawn socially distanced crowds — and inspired many social media posts — since its installation last month.

The digital calico behaves a bit like an actual cat, in the sense that it does whatever it pleases. Visitors are only treated to a few brief appearances per hour, in between a stream of advertisements and music videos.

The cat yawns here and there, and at 1 a.m. it drops off to sleep for about six hours, resting its head on white paws that hug the side of what appears to be an open-air perch near the Shinjuku subway station. (The three-dimensional look is an illusion created by a curved, 26-by-62-foot LED screen.)

It also talks, greeting pedestrians with “nyannichiwa.” That is a blend of “konnichiwa,” or hello, and “nyan,” Japanese for “meow.”

Unlike many of the flashing billboards and signs in the area, the cat isn’t advertising a specific product or brand.

Takayuki Ohkawa, a spokesman for the Japanese conglomerate Unika, one of the two companies running the feline display, said that the cat does not have an official name. (Fans have called it “Shinjuku east exit cat,” after the station.)

“There are many reasons we decided to display the cat, but one of the big reasons is that with corona, the world became very dark,” Ohkawa added, referring to the coronavirus pandemic. “Through the cat display, we wanted to revive Shinjuku and make it brighter.”

Now I’m not sure exactly how it works, but I’d love to have one in Chicago.

You can find the livestream here (it was hard to locate), but I can’t find the cat’s Twitter account. Perhaps a reader can put it below.

Finally Scott, who sent this video, notes: “This is a channel for a professional groomer of pets. Trigger warning, there be d*gs about!

“.  Meet Hank, a “senior diabetic cat”. Hanks, unlike most cats, loves the blow dryer, and even lifts his leg so his belly can be dried. He’s remarkably compliant about being combed and having his nails clipped, too.

Now this is a woman who knows how to groom a cat. She even sprays Hank with kitty cologne after the grooming is done.

I suppose his hijab is there to prevent water and soap from getting in his eyes, but I’m not sure.

You mentioned Sir Joshua Reynolds’ birthday (July 16, 1723) and asked for any painting by him of a cat. “Felina with a Kitten” (1788) is a Reynolds painting in the collection of the Detroit Institute of Arts. 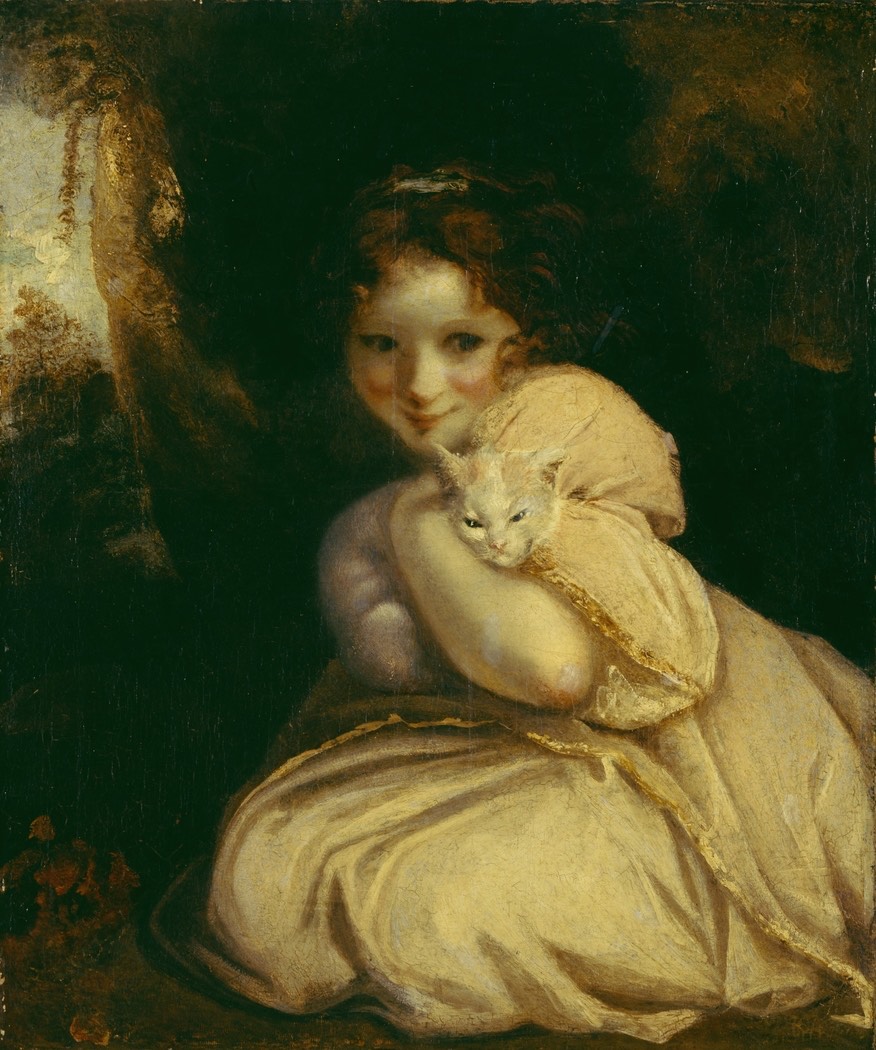 12 thoughts on “Caturday felid trifecta: Turning your back on a lion; Japan’s stunning digital cat billboard; Hank gets groomed; and lagniappe”