Haverford College, a very ritzy school in the eponymous Pennsylvania town, is one of the wokest (or should I say “most progressive”) schools in America, and not in a good way. Last year I reported how they caved in to ludicrous student demands. Let’s reprise:

On December 5 I described the meltdown happening at ritzy Haverford College (tuition: $57,000 per year, total expenses $76,000 per year) following a police shooting of a black man in nearby Philadelphia. The students went on strike and issued a long series of demands to the College, as outlined in my article and in an informative piece in Quillette by Jonathan Kay.

What was remarkable about the Haverford protests was how readily the administration caved in to the student demands, which comprised the usual laundry list of no punishments for strikers, more money for diversity initiatives, defunding the police, changing the curriculum, the institution of pass-fail grades, the creation of ethnically segregated spaces, and getting rid of the President (he’s now resigned). It seems that the students suddenly discovered the university’s “systemic racism”, which wasn’t a problem before the shooting (see Kay’s article about the harmony that used to reign at Haverford), and used this discovery to try getting everything they wanted.

The response of Haverford administrators, who cringingly abased themselves online, was in strong contrast to the response of nearby Swarthmore College (equally ritzy), whose black President, Valerie Smith, basically told the students to bugger off and stop making anonymous demands instead of engaging in civil discourse.

And, by and large, the Haverford students won. An article at the Haverford Clerk, the College’s independent student newspaper (click on screenshot below) recounts the administration’s surrender and links to a list of the students’ demands and the administration’s item-by-item responses, with the vast majority of those responses being “yes, we will.”

See here for more. Based on the school’s speech-chilling Honor Code, the Foundation for Individual Rights in Education (FIRE) previously rated the school “yellow”, meaning there were restrictions on free speech. Haverford is a private school, and doesn’t have to adhere to the First Amendment, but has an official Academic Freedom policy that guarantees a student’s right to “speak or write freely on any subject.”

It turns out that Haverford doesn’t really abide by that policy. As FIRE discovered, the school also has a new policy whereby “microaggressions” and disrespectful speech are violations of the Honor Code, which puts that Code at odds with school policy. Because of that, FIRE has named Haverford’s policy its “speech code of the month”, and that’s not an honor!

Click on the screenshot to read more, though I’ve summarized the salient stuff below:

Here’s a FIRE video about the new amendment:

Here’s an excerpt from Haverford’s new amendment to its Honor Code, given on the FIRE website:

The prohibition on microaggressions is far clearer in the amended version, with added text bolded:

We also recognize that a person’s  political opinions  are necessarily intertwined with their values and outlook, and thus influence their practices. These practices may violate the Honor Code. As such,  students  must be respectful of community standards  when expressing political opinions. As the Social Honor Code applies to all of our interactions at Haverford, engagement in political discourse falls within its jurisdiction, and political beliefs may not be used to excuse behavior that violates the Code. If we find that our political beliefs perpetuate discrimination, we are obligated to re-evaluate them as we would any of our beliefs that perpetuate discrimination. . . .

[C]onfronted students weaponizing the Code’s expectation of respect in order to silence and/or invalidate the experiences of harmed parties—including invalidating experiences of harm by claiming discrimination against a privileged identity (e.g., claims of reverse-racism) or refusing to reflect on their actions—is a violation of the Code. Using one’s political beliefs to justify disrespectful or discriminatory words or actions is also a violation of the Code.

Microaggression is of course is a slippery concept, for not only does Haverford not even give a definition of “microaggression,” but, as FIRE says, “the addition of the language that students ‘must be respectful of community standards when expressing political opinions’ turns the Honor Code into a civility code.”  “Disrespect” and beliefs that “perpetuate discrimination”, are not forms of protected speech under the First Amendment, but are slippery. Is criticism of Israel or Palestine now a microaggression? (Even the words “dirty Jew” should be protected!). What about criticism of Black Lives Matter? The tenets of Islam or Catholicism? As we know, what constitutes “harmful” and “violent” speech has expanded beyond all reason, and Haverford’s code has expanded to include much of what we want to be protected.

Further, the body that adjudicates the school’s Honor Code violations comprises entirely students, and, as FIRE adds, “being brought before a jury of your peers to defend your protected speech is punishment in itself.” In other words, the school allows protected speech to be punished, and violates its own promise of adhering in principle to the First Amendment.

In light of this amendment, FIRE says they’re changing Haverford’s rating, once the changes are on the school’s website, to the worst category for free speech, the dreaded “red-light rating.” I wouldn’t send my kid to a $74,000/year school so they would have their speech monitored and regulated by other students.

In the meantime, at the page above (or click below), you can register a complaint with Haverford by filling in the form that goes to Haverford’s President. 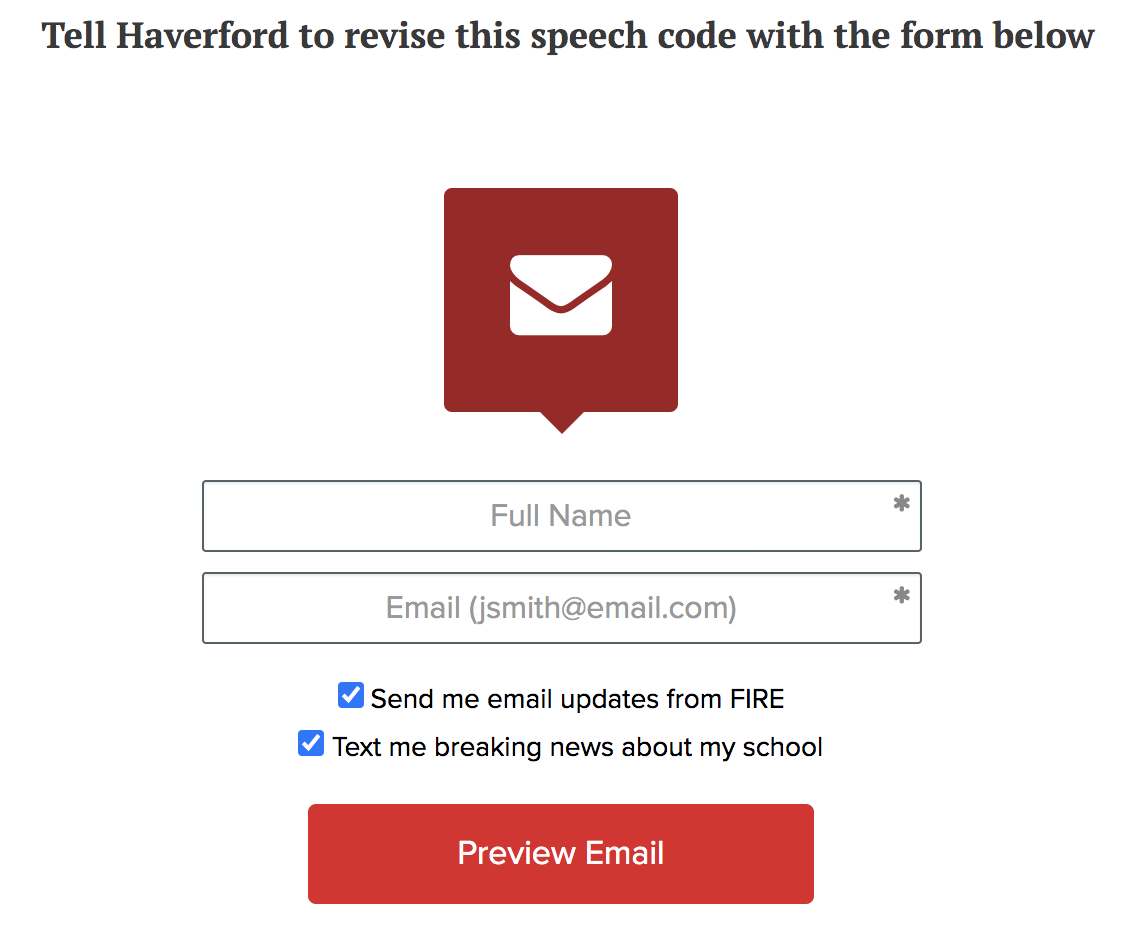