Brandeis University’s Prevention, Advocacy, and Resource Center is recommending changes in many words and phrases to conform to the moral Zeitgeist. If you click on the page below, you’ll go to several categories of language containing phrases that the University recommends be revised, what those changes should be, and why they should be made. You can even suggest your own phrases and words at the bottom of the page.

I realize it’s useless to try to stop the evolution of language, but it’s interesting to see that terms once considered innocuous (sometimes out of thoughtlessness or ignorance) are being revised. I find the list, however, a mixed bag, though mostly useful. I’ll show you the categories and make a few comments on the revisions.

First the page, which shows that the changes are not policy or mandated by Brandeis. 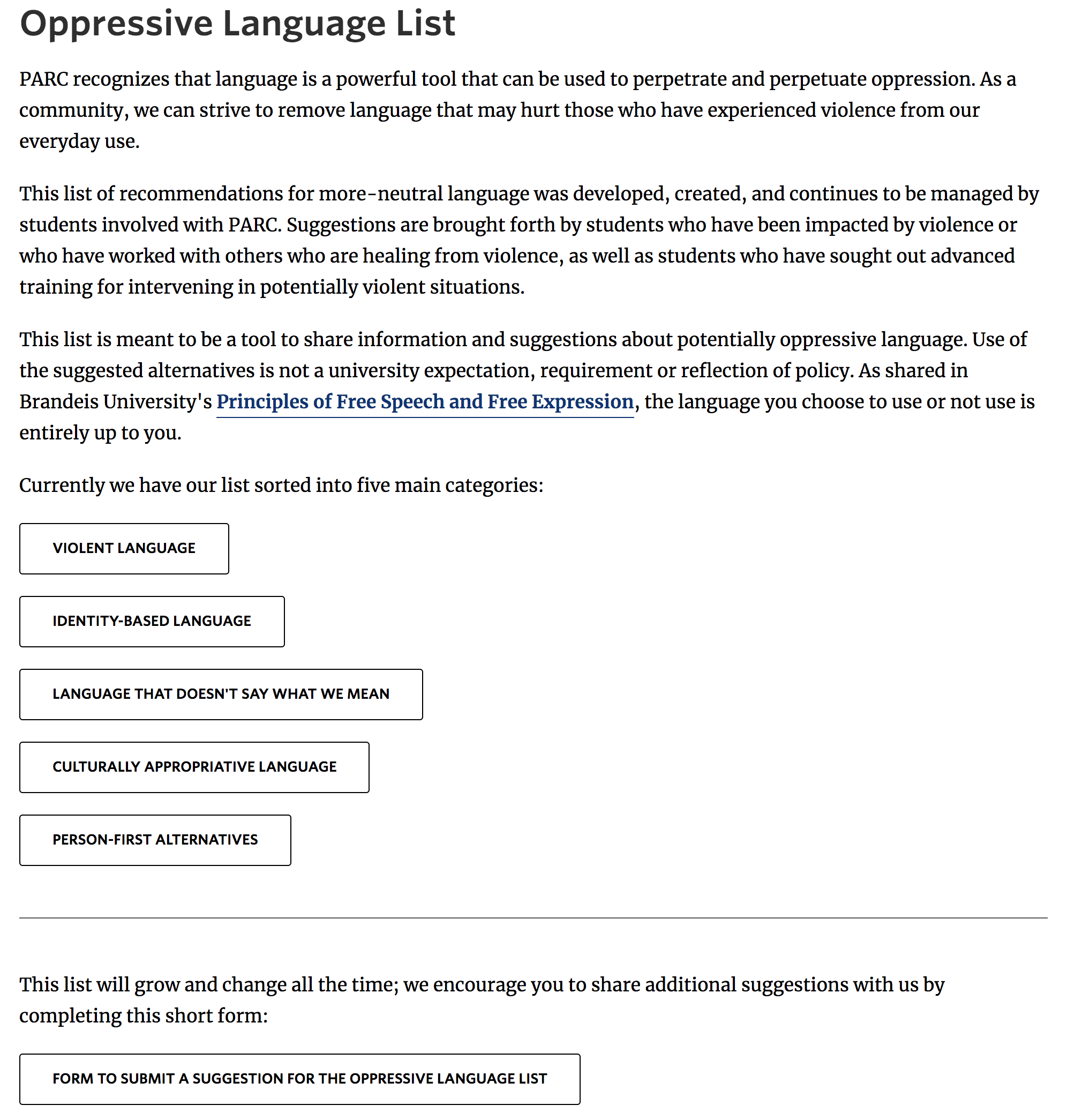 And I’ll put up screenshots of the four categories.

Of these, the first four seem overly Pecksniffian, while the last two should be replaced. As for “rule of thumb”, yes, its origin is odious, but nobody even remembers where it came from. Should phrases that obscure be eliminated? Weigh in below. 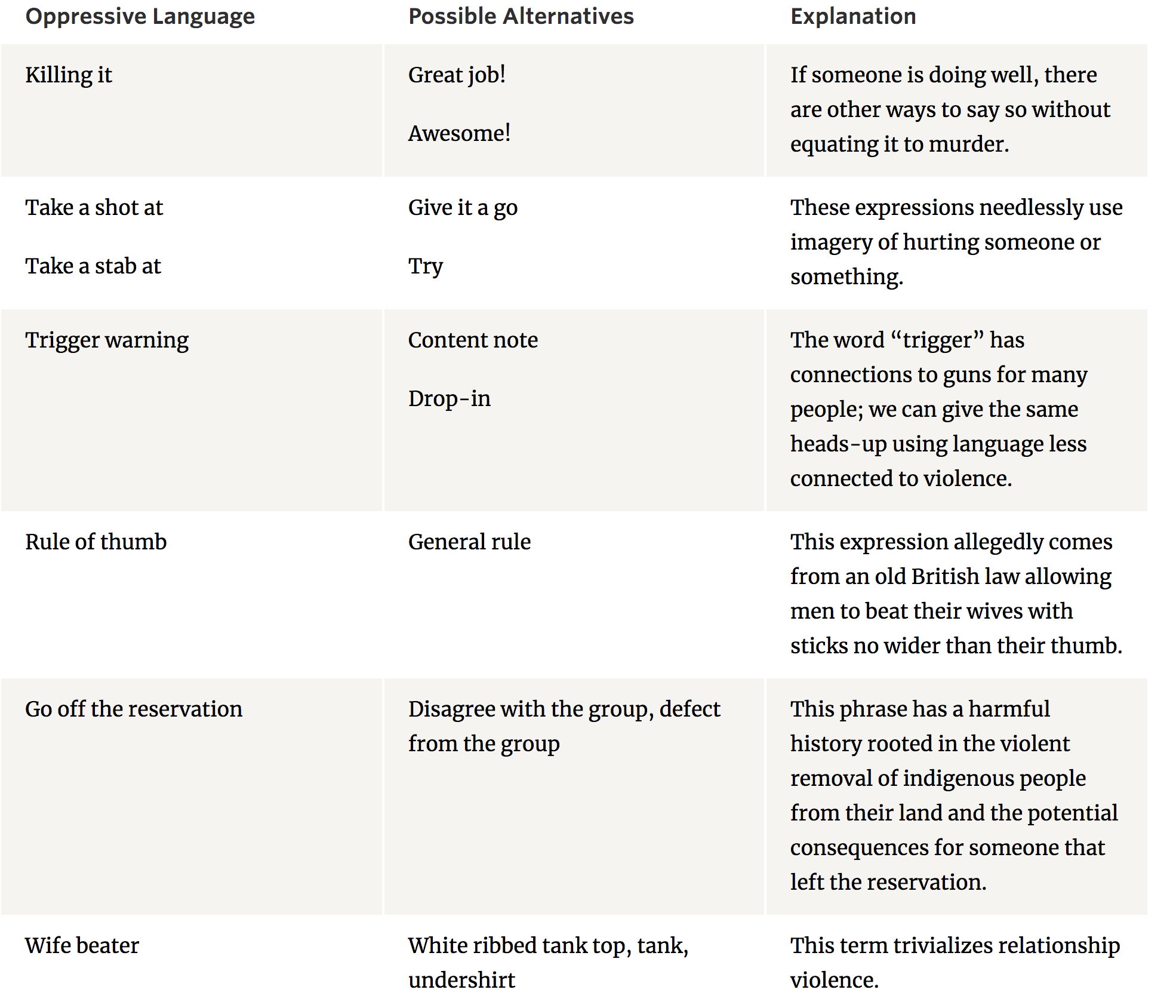 I can see the point of many of these suggested changes, though I’m not 100% on board with “you guys” (women use it all the time), or referring in the third person to “she” or “he” if you don’t KNOW their preferred pronouns (this can always be corrected, but, for example, referring to Putin, I don’t think the newspapers should say “they”). Words that end in “man”, like “congressman”, should be ditched, though “congressperson” is a mouthful.

I’m surprised that African-American is now passé, as I thought it was the most approved term for that group. I often use black and white or Black and White, but won’t capitalize Black without capitalizing White as I find journalistic justifications for that disparity insupportable.

“BIPOC” for generic “people of color” seems an awkward replacement, and the rationale is weak, for all “people of color” are already BIPOC. Most of the “ableist” language like “crazy” and “insane” are well ensconced in language, and it seems to me an overreaction to object that these stigmatize people with real mental illness. “Tranny” is odious and should never be used, but I don’t get the rationale for “transsexual”, though I’m happy to add “person”. Should words like “amputee” then be changed to “person with an amputated limb”? If so, so be it.

“Gypped” and “Jewed” are rightfully out; I’m not so sure about “Long time no see” and “no can do”, because even though they may have originated as aping the poor language of immigrants, they’re not used that way any longer and they’re quite expressive.

“Sold down the river” and “Indian giver” are rightfully out. 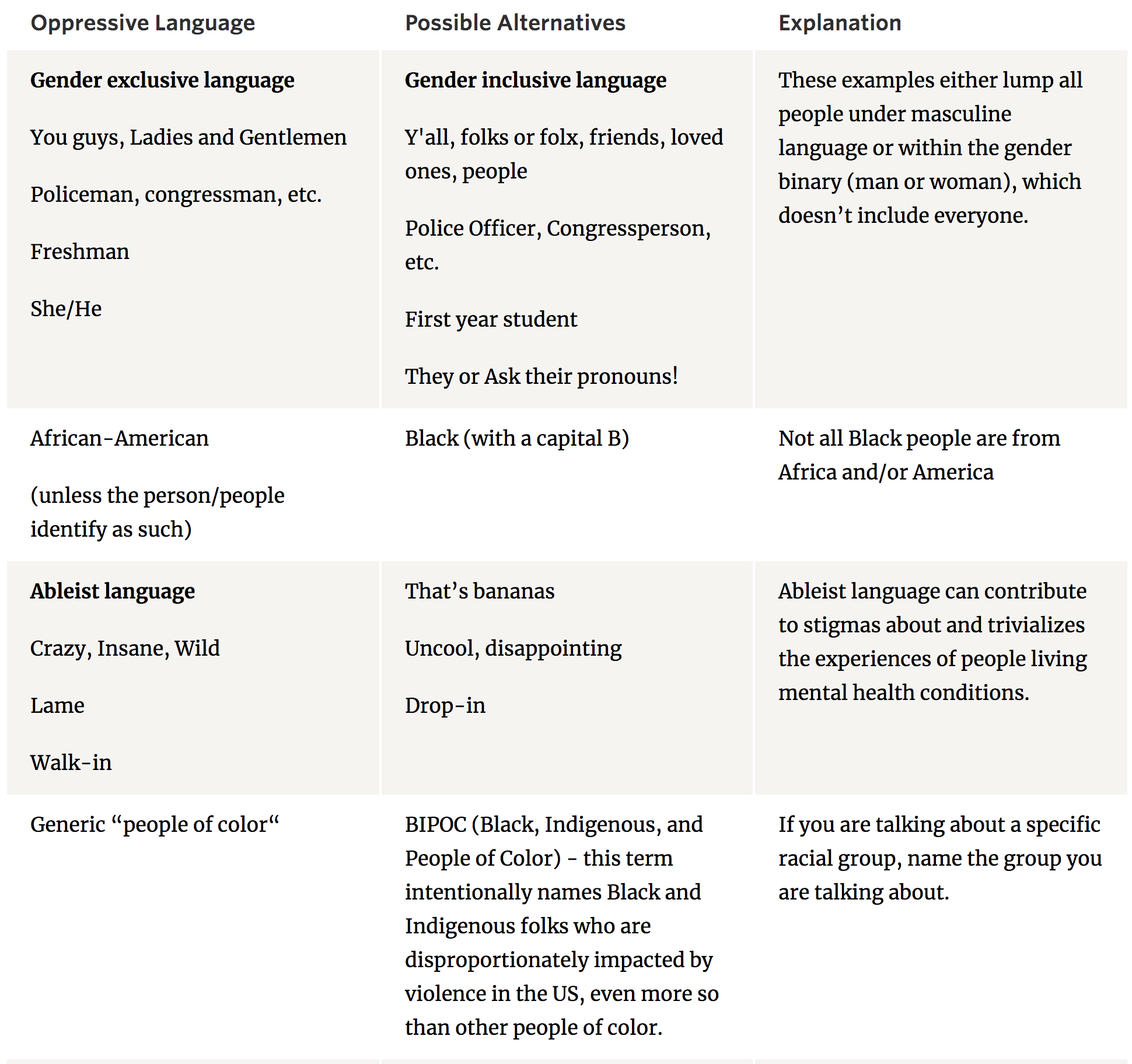 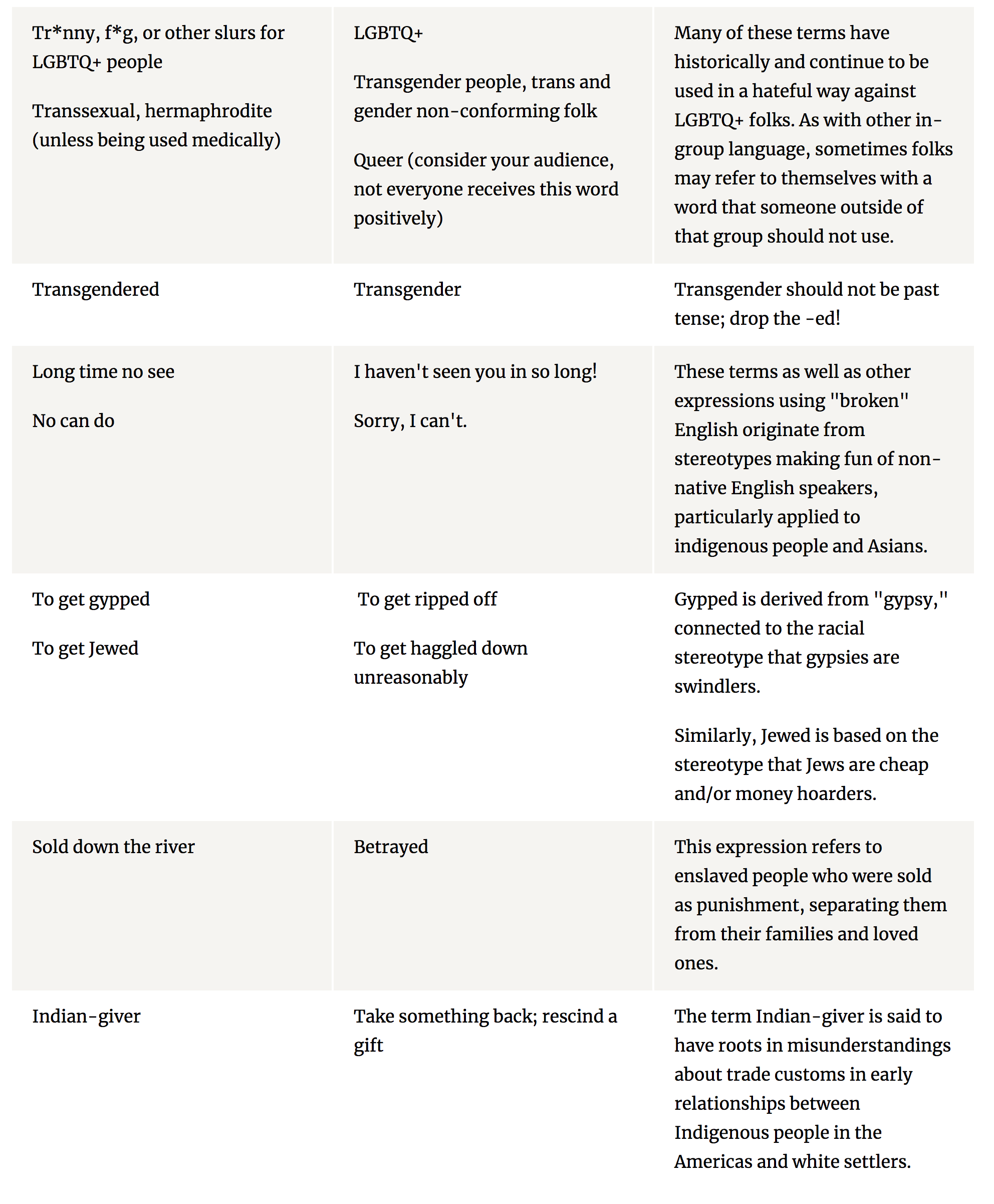 LANGUAGE THAT DOESN’T SAY WHAT WE MEAN.

The first phrase seems unobjectionable to me, and the rationale for changing it is weak. You can always clarify if your listener asks. I have no problem with “committed suicide”, but the terms “failed” and “successful” suicides  do rankle with me. The others I have little problem with.  I’d prefer “victim of” to “victim” and “survivor of” to “survivor” instead of the awkward suggested changes. 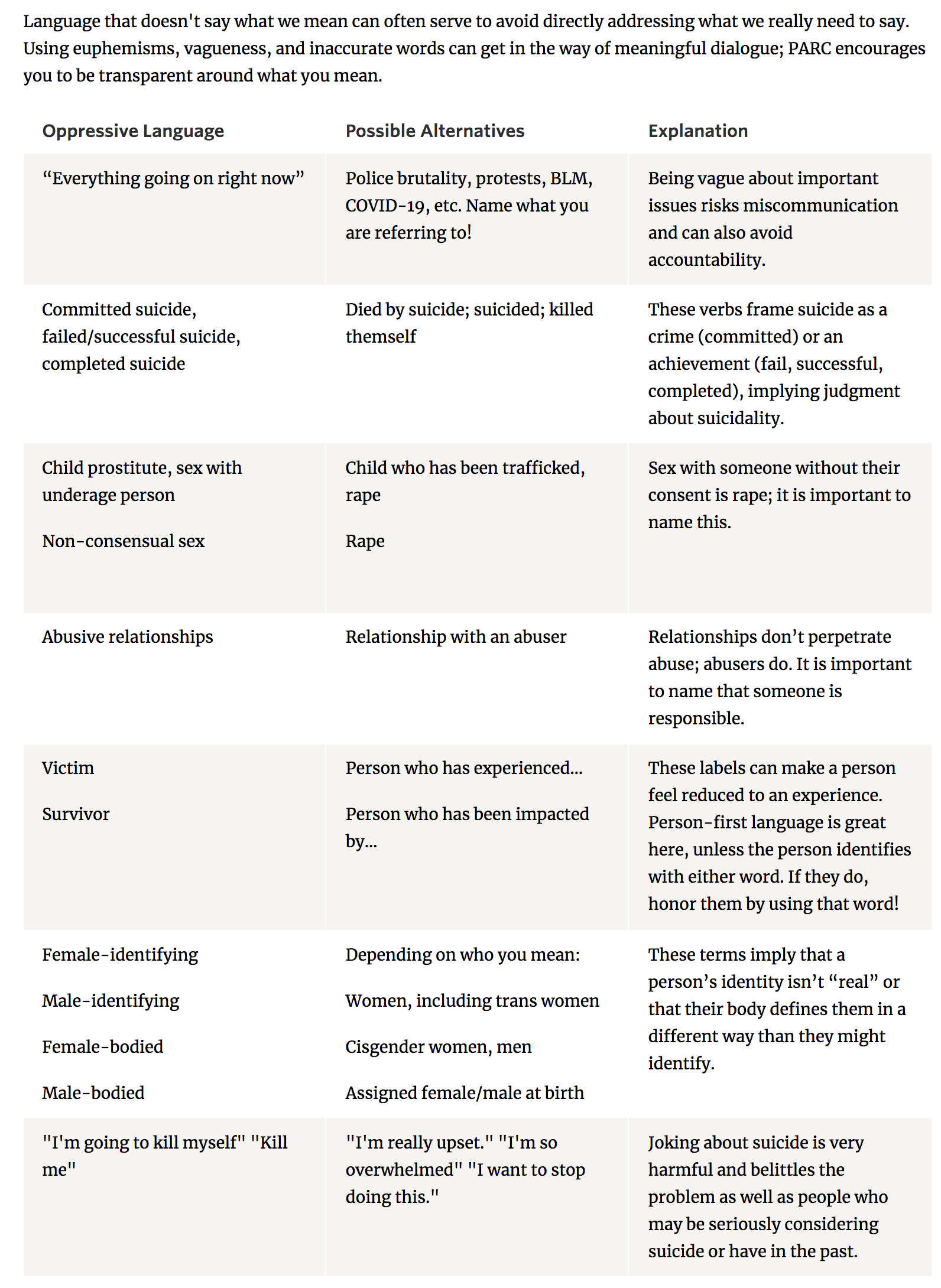 I may be appropriative, but I don’t see these phrases as particularly demeaning to groups; rather, I see them as enriching English. “Tribe” is perhaps the most problematic, but I can’t see a strong case for its elimination because it supposedly oppresses people and enacts “violence” (remember, that’s the rationale for these changes). Finally, I don’t get at all the use of “person without housing” as a replacement for “homeless person”, since they both contain the word “person” and explicitly imply that the referent is a human being. 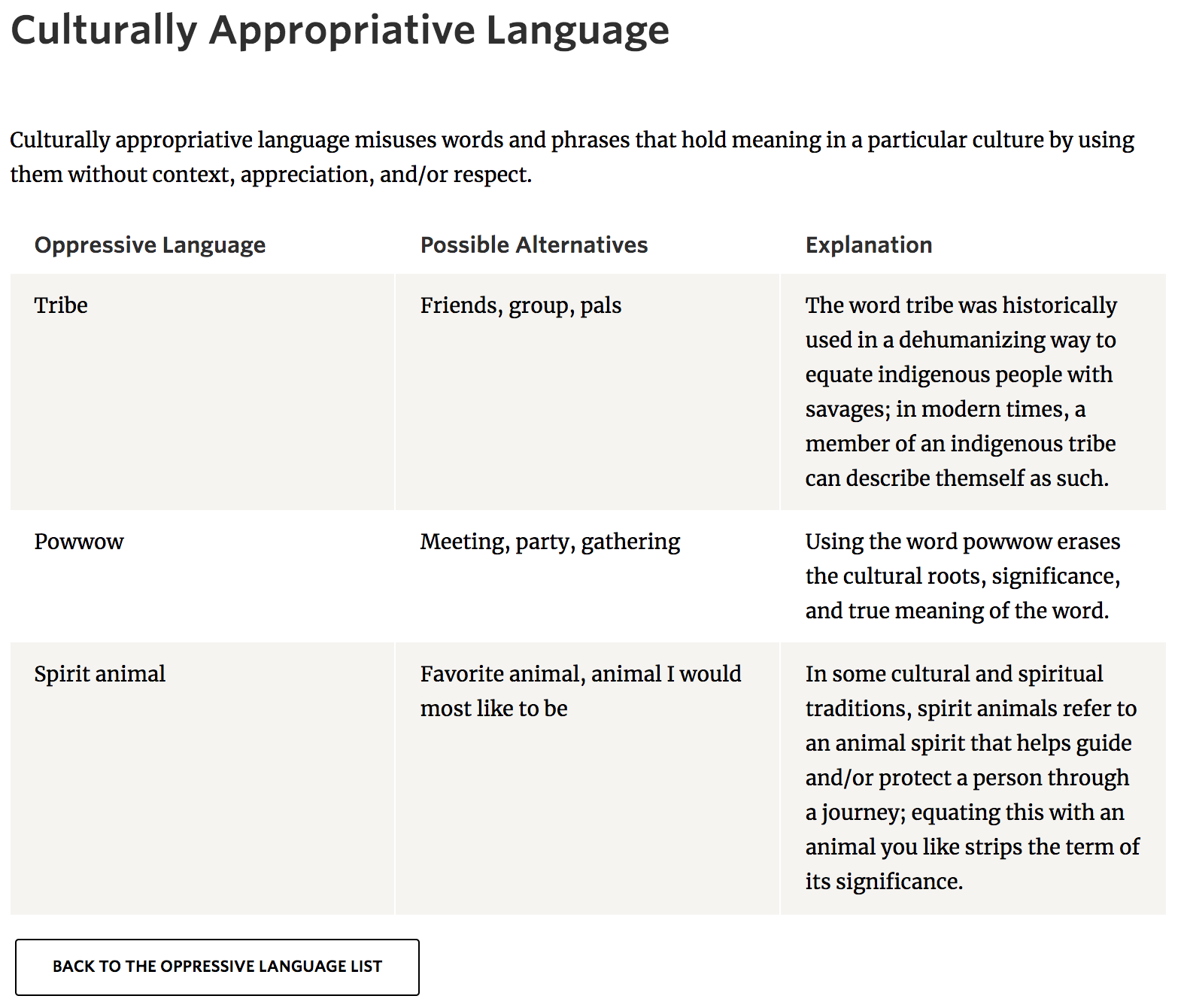 I understand the rationale for all of these, especially the use of “enslaved person” for “slave”, which seems sensible. But I do wonder if “person who has been incarcerated” will replace “prisoner.”  “Addict” or “drug addict” is used in a specific context, and to me doesn’t imply that there’s not a person involved in being addicted. Further the suggested alternative is awkward. 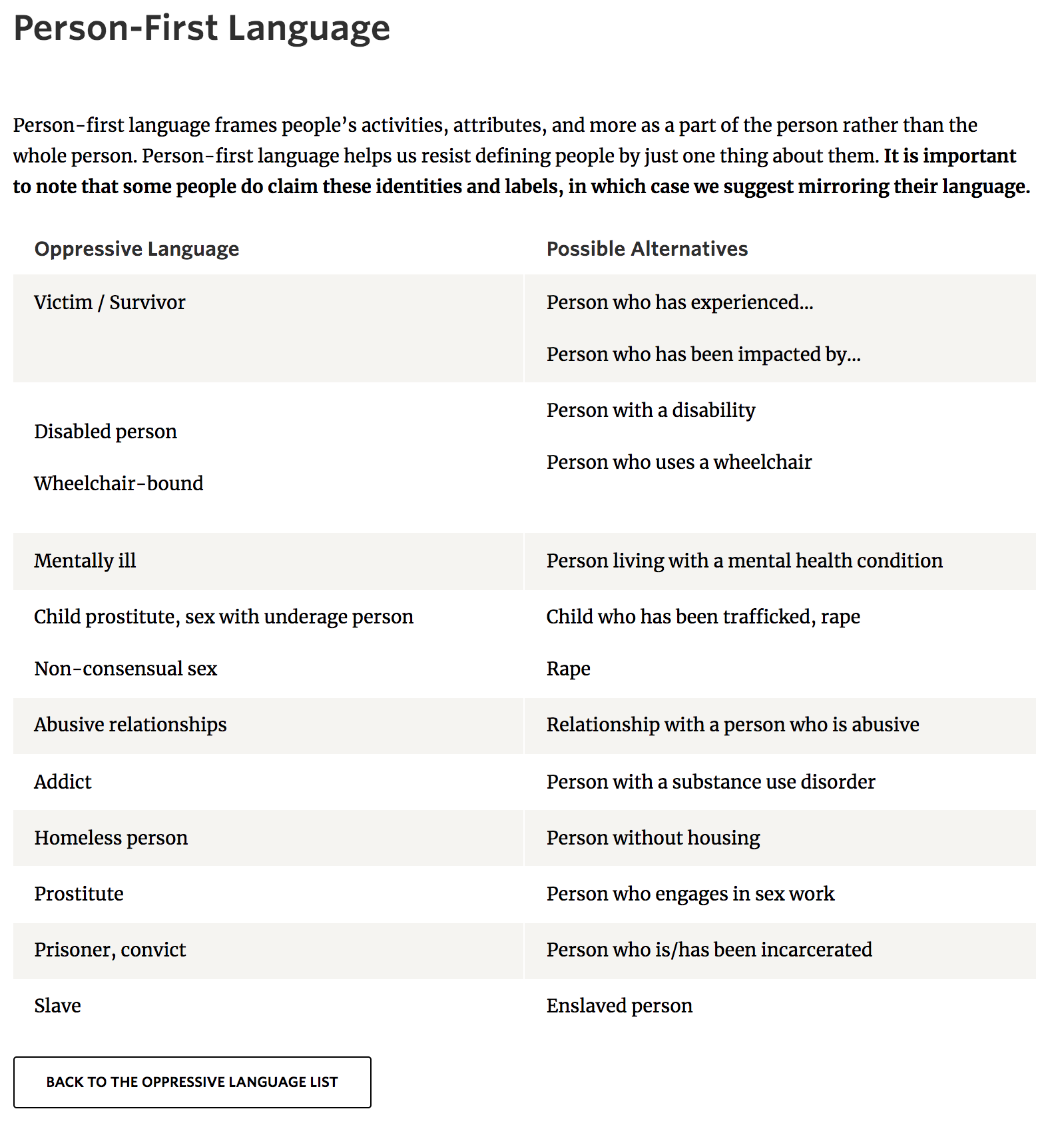 I don’t know if I’m mellowing, but I don’t have an issue with most of Brandeis’s suggested changes. What I would have an issue with are two things. First, these changes can be promulgated to make people think about how others might react to their language (if you don’t think “tranny” is offensive, you are clueless). But these changes should not be mandated, as doing so would violate free speech. Fortunately, Brandeis isn’t mandating them.

But beyond some of the language insulting some people, one has to ask whether creating these changes “perpetuate and perpetrate oppression.” Feeling offended and being oppressed are not the same thing, though I don’t think people should use language that will often offend people.  But Brandeis adds that the everyday use of these words creates “violence” are just wrong: there is no “violence” going on, but instead claimed offense. And so I offer my own revision in the spirit of inclusion, and recognizing that I think the Brandeis list IS useful:

Overblown language: “Your words perpetrate violence upon me.”

Alternative: “Your words offend me.”

Explanation: Being offended is not at all the same thing as being a victim of “violence”. This is hyperbole, and a definite attempt to suppress language and behaviors via rhetorical inflation. It is Orwellian language.

113 thoughts on “Brandeis’s revision of language: a mixed bag”