I suspect that this new Gallup poll is evidence for an increase in morality—at least in the legality of transgender people serving in the American military. Although the month-old Gallup survey below shows a slight decrease in favoring that ability between 2019 and 2021, I’m betting that the “favoring” figures would have been much lower several decades ago.  This change in attitudes, if I’m right about what I just said, mirrors the increasing acceptance of gay people serving in the military, not to mention Americans’ increasing approval of the legality of gay marriages.

Serving in the military (data below): Except for Republicans, most Americans favor openly transgender people being able to serve in the military. Liberals, of course, favor it more, and women more than men. As expected, the older one is, the less likely one is to favor military service of transgender people. Transitioning is largely a modern phenomena, and is increasing rapidly among the young.

The question is why in every group save Republicans the degree of favoring has gone down a bit in the last two years. I don’t understand why, but Gallup says that they have “routinely found shifts in public opinion, particularly among political independents, during presidential transition periods — as has been the case for approval of the Affordable Care Act and support for labor unions.” But if this decrease is a sour-grapes reaction to Trump’s defeat, why did the Republican figures remain unchanged while Democrats lost one percent and independents 12 percent? Gallup adds that this level of support is similar to that seen for gays and lesbians serving in the military between 2004 and 2010, before the “don’t ask, don’t tell” policy was repealed. 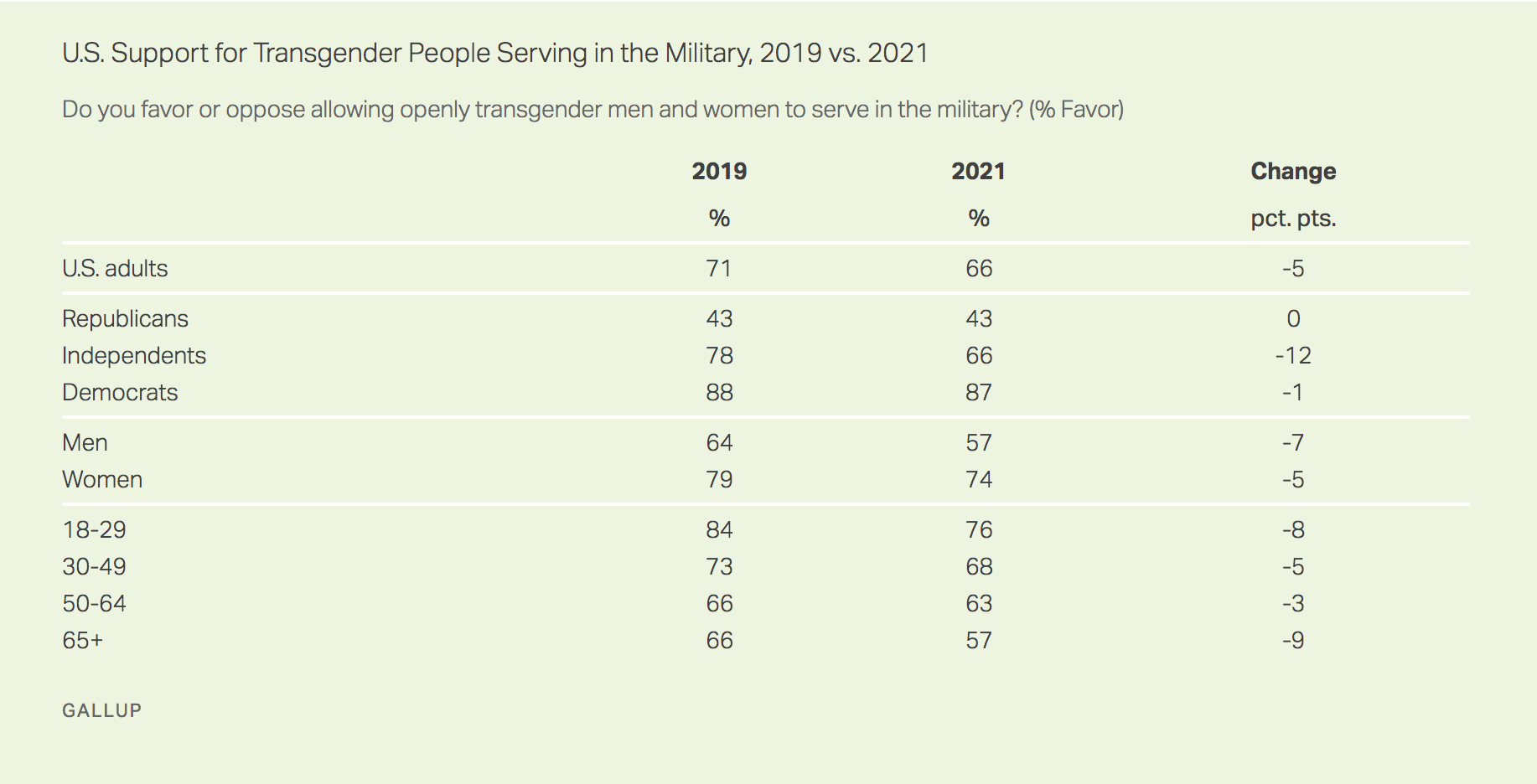 I think this question could have been asked in a better way, and in two senses:

a. Should transgender women be allowed to play on sports teams that match their current gender identity (i.e., women’s teams) rather than their birth sex?  After all, that is the big question. (You could also ask this for transgender men playing on men’s teams.)

b. Should medically untreated transgender women (or men) be allowed to play on sports that teams that match their current gender identity rather than their birth sex? (You could ask the same question for those who have undergone hormonal treatment and/or surgery. In terms of average strength, bone density, and muscle mass, untreated transsexual women should be expected to be similar to men. 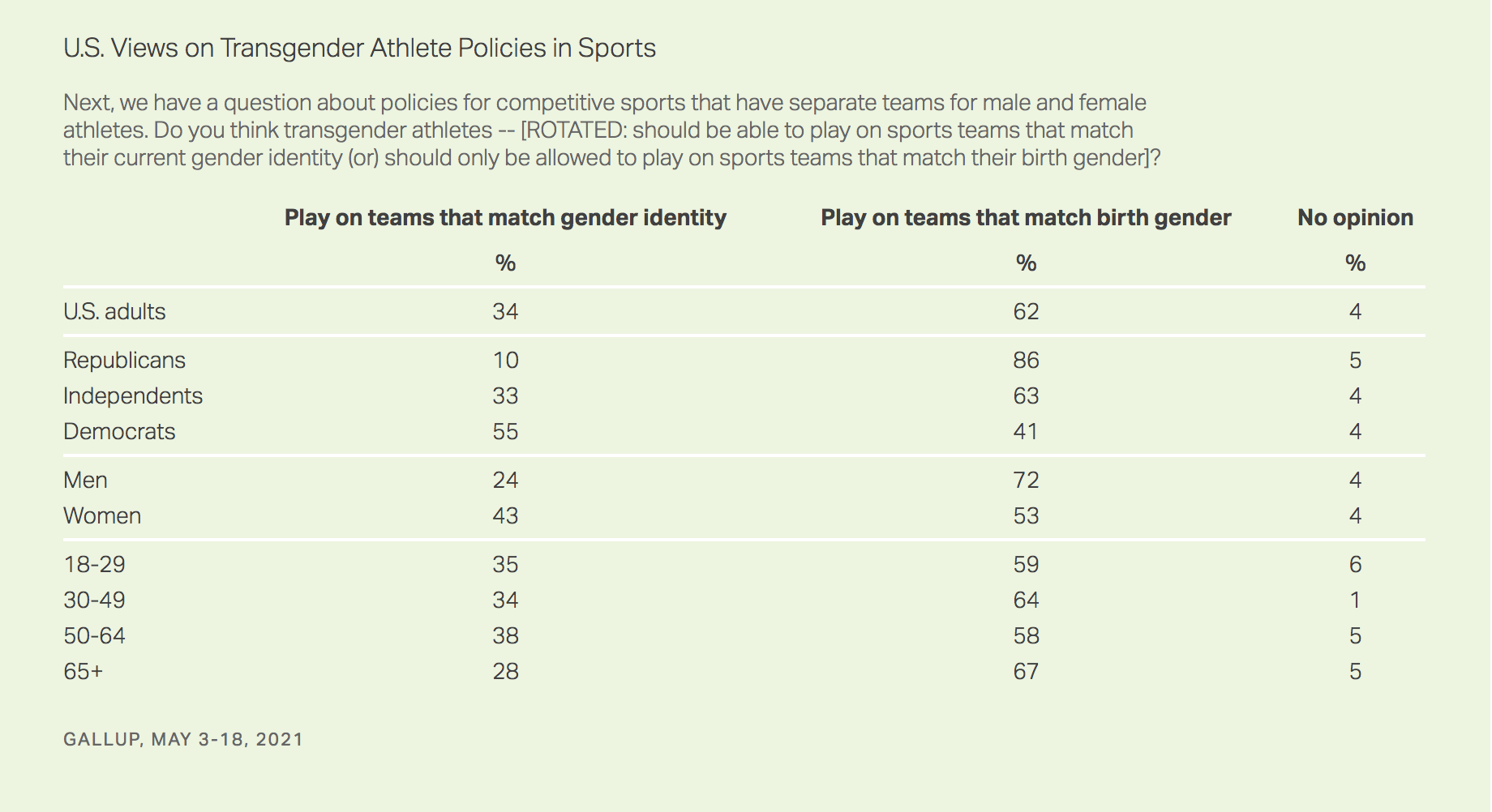 Do you know someone who’s transgender? The data are below:

As for whether knowing someone changes your views, the answer is yes. As Gallup says:

Views on transgender athlete policies and right to serve openly in the military are slightly influenced by whether respondents personally know a transgender person. This is similar to what Gallup has found in the past about Americans who personally knew a gay person and their views on gay issues.

Given this, the age difference in whether one knows a transgender person predicts that, as time passes, there will be more sympathy for transgender issues, including the military and sports issues. Although the two-year data on military service shows a slight decline in support, I’m convinced that it will increase in the next decade.

And that’s as it should be, at least in my view. Society is better if people are given the chance to fulfill their hopes and dreams.

The sports question is a much thornier one, but ideologically-based reactions that don’t take physiology and sex differences into account may lead to an increase in support for unconditional favoring of transgender women to participate in women’s sports.

The lesson—an old one (see here)—is that if you know someone, you’re more likely to sympathize with their views and their identity. I would take this as militating against the increasing segregation of ethnic groups in colleges, like race-segregated dorms, euphemistically known as “affinity housing”. I think we should try mixing people up rather than separating them by ethnic, religious, or political affinity.

19 thoughts on “Gallup poll: American’s view on the rights of transgender people”