Here we have an example of the Kendi-an principle that the existence of an inequity—disparities between proportions of groups in a population and their proportions in professions or in measures of performance—is prima facie evidence for systemic racism. (I take systemic racism to mean racism embedded, either formally or systematically, in an institution.) In this case of this Washington Post article, reading gaps between four groups of students: Asians/Pacific Islanders; White non-Hispanics; Hispanics, and African-Americans, is seen as evidence of systemic racism in the schools. But, as John McWhorter always emphasizes, there are alternative explanations. 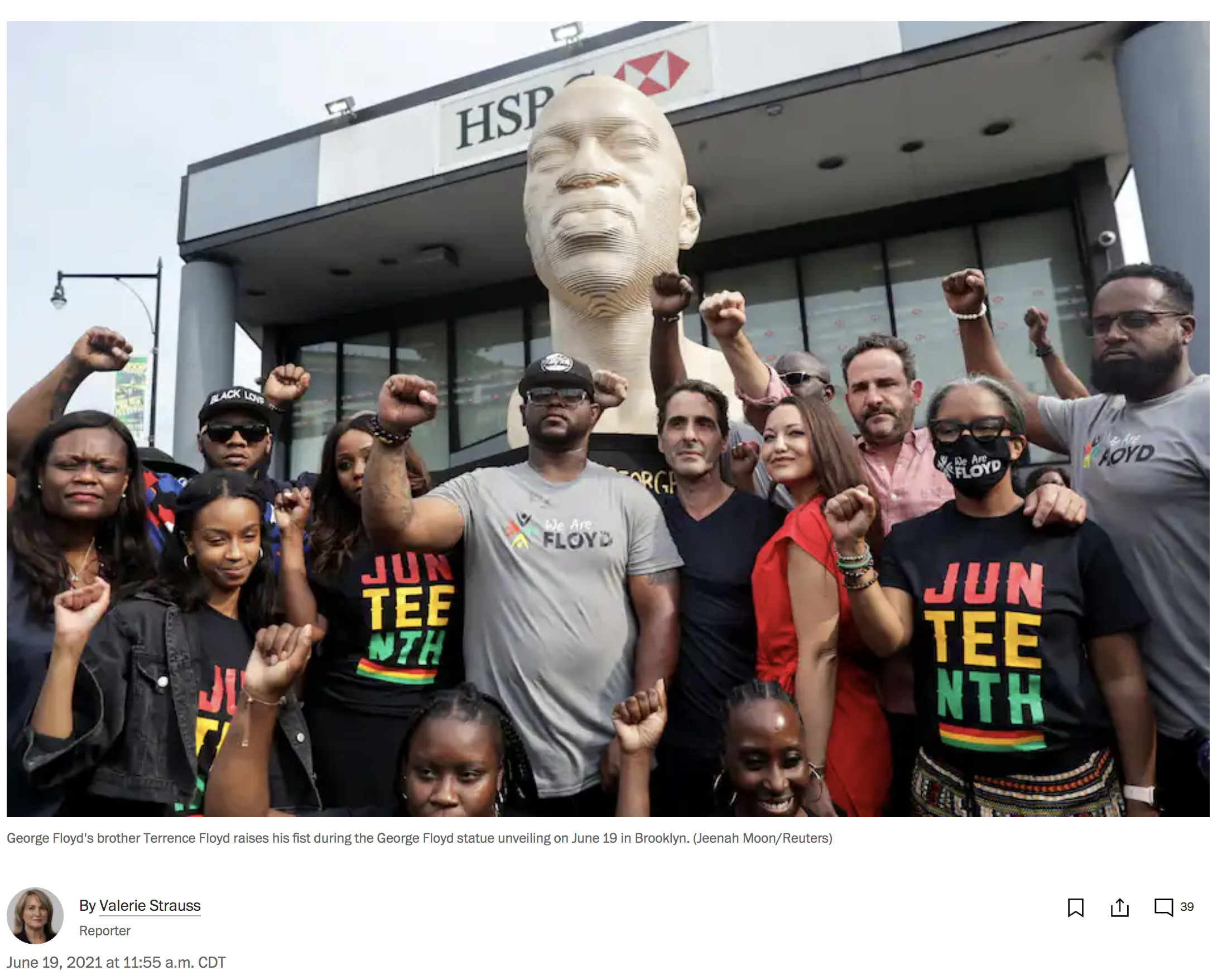 Here are the data from the Education Department’s National Assessment of Educational Progress (NAEP) in reading (there are other results, but they’re not described):

. . .That is the outcome for the entire public school population. NAEP did not stop there. It then analyzed the data in a number of different ways, one of which was by race/ethnicity. Twelve percent of Asian/Pacific Islander students were at the advanced level, 42 percent were at proficient, 31 percent were at basic and 15 percent were at below basic; it’s something like a bell curve skewed a bit to the right.

Achievement outcomes for White non-Hispanic students (whom NAEP calls “White”) were something like a bell curve skewed to the left: 5 percent at advanced, 36 percent at proficient, 39 percent at basic and 19 percent below basic.

Outcomes for Black students were even more heavily skewed to the left: 1 percent at advanced, 14 percent at proficient, 39 percent at basic and 47 percent — nearly half — at below basic.

. . . In 2019, our public schools taught 80 percent of White non-Hispanic students to read at least at the level expected for those middle school students, but they failed to teach nearly half of their Black students to read as well as eighth-graders might be expected to read.

Author Strauss says, correctly, that this is a disaster, because to function in many jobs, or simply to function well in life, you need to read at least at the “basic” level.  28% of the entire country being “below basic” is bad enough, but 38% of Hispanic students and 47% of black students testing below “basic” is a scandal. It signals that something has gone badly wrong, especially for minority students, and that something needs to be fixed. (Strauss also notes that, in general, female students in each group do better than males ones.)

Now these disparities aren’t new; they’ve been known, and pretty stable, for years. The question is how to fix them. To do that, you need to know a.) the causes of the disparities and b.) what to do to make students read better. (I’d say that “b” is the crucial factor, and I don’t know much about that.)

Strauss goes on to adduce data from Texas, which is marginally worse for all students as well as for ech group of students. (I suppose she singles out Texas because that’s where “Juneteenth” originated.)

The causes? Strauss rules out income because when she does a rough control for income, looking at the proportion of students in each group eligible for school lunch programs, meaning being pretty poor, the disparity remains. Income “matters” (she means it’s correlated with reading proficiency) for white non-Hispanic students, but not for black students. In fact, she sees the causation going this way:

Household income, then, does not appear to explain the gap in reading skills. Rather, I would posit, it is the reverse: A lack of basic reading skills and, in general, inferior educational opportunities, such as those for Black students in Texas, result in a gap in household income in successive generations.

Well, she can posit what she wants, but we don’t have the data either way. Further, she backtracks on her own hypothesis by adducing income as a factor in proficiency connected with incarceration:

Texas is far from alone in producing large racial gaps in NAEP reading scores. Similar, if slightly less dramatic, gaps can be seen in other states and nationally. This, and the related high incarceration rates for Black males, limits household income for Black Texans and other Black Americans, passing those limitations on to the next generation.

Unless I read her wrongly here, she’s connecting low income in black Americans (caused by higher incarceration rates) with a “limitation” that reduces reading skills. Yet she ruled out low income as a cause of reading inequity. But never mind; her point is to say that the disparity is due to systemic racism, which she simply declares without evidence:

How is this to be explained if, as former vice president Mike Pence tells us, there is no systemic racism in this country?

Or is systemic racism invisible to those who benefit from it, like water for fish? Kings do not protest monarchy. Aristocrats and millionaires rarely have protested class-based societies. Only after millennia did men begin to notice the oppression of women.

Admitting the systemic racism in American education is a necessary step toward ending it.

But if the systemic racism is “invisible”, how do we test for it? And what does she mean, exactly, by “systemic racism”. Clearly the status of African Americans as an oppressed minority must reflect the racism connected with slavery, and persisting for decades afterwards. As Brown v Board of Education declared, separate is not equal. And things are still largely separate, with de facto segregation of many schools due to segregation of neighborhoods. And, of course, only a fool would deny that racism is still with us, even if it’s not “systemic”.

But is the present gap in reading really due to systemic racism somehow built into the current educational system? Or could it be unequal facilities or teaching quality correlated with schools whose students largely belong to one group or another? That might not be systemic racism, but the present reflection of old racism. It’s still racism, but what’s important is to rectify the disparities.

Alternatively, and as John McWhorter maintains, achievement gaps between blacks and whites could reflect cultural differences: a devaluing of academic achievement, a dearth of two-parent families, a lowering of expectations for black students, and so on. Cultural differences are absolutely rejected by many—almost as a taboo—but McWhorter’s ideas (he is of course is black and has more credibility on such issues—could be part of the explanation. McWhorter’s been saying this for years. This piece from Wilson Quarterly in 2000, for example, “Explaining the black education gap”, sounds like he could have written it yesterday on his Substack site:

It is not pleasant to think that blacks are held down by black culture itself. But it is absolutely vital that we address antiintellectualism in black American culture honestly. To deny its pivotal significance is cultural self-sabotage.

We have arrived at a point where closing the black-white education gap will be possible only by allowing black students to spread their wings and compete freely with their peers of other races. More than 30 years of affirmative action have shown conclusively that programs that let black kids in through the back door will not solve the problem. Youngsters coming of age in a culture that does not value educational achievement are not helped by a system that only reduces the incentives to excel.

. . . . Our interest, then, must be in helping black students shed the shackles of anti-intellectualism. Any effort that prepares black students to compete is laudable: For example, secondary schools should urge black children to form study groups, which have been shown to improve minority students’ performance. Immersing black students in extended academic work sessions with fellow blacks counters the conception that school is “white.” Minority students should also be given standardized tests on a regular basis in all schools, even those with insufficient resources. This alone will raise students’ test scores.

Now, as I always say, I have no dog in this fight, and am hardly an expert on black culture. But I am a scientist, and I know that fobbing off the achievement gap as wholly due to present racism in American school systems (which could, indeed, be part of the explanation), and doing so without evidence, is not going to convince anybody who’s not already a committed ideologue.

And, most important, we need to spend less time finding people to indict and more time figuring out how to fix the situation. That will be a very tough one, but surely we can all agree that kids of all colors, family incomes, and backgrounds should have the same government-supplied resources and opportunities to learn.