Welcome to Monday, June 21, 2021: National Peaches and Cream Day. That means that you can not only eat this dish, but that things will be fine. It’s also Take Your Cat to Work Day (if you’re working from home, that’s okay, otherwise forget it!),  National Selfie Day, World Giraffe Day, and, most important, Atheist Solidarity Day.

It’s the first full day of summer (the summer solstice started just before midnight last night) and today’s Google Doodle celebrates this with an animated gif (click on screenshot; there’s a different Doodle for the Southern Hemisphere, where winter just began).

Finally, it’s also these holidays (the solstice was at about 11:30 pm yesterday):

The Bidens still don’t have a cat. I will report daily until they get one.

The shootings and killings continue to escalate in Chicago: I know when it’s bad when I drive to the grocery store early on Saturday or Sunday morning and pass the University of Chicago Emergency Room. When there are more than two cop cars outside, and when there are a bunch of cops milling about  in front of the ER door, I know it was a bad weekend. That’s what I saw this morning and, checking up, I found that five people were killed and 40 hurt in this weekend’s shootings. And that report was filed at 9 a.m. Sunday morning! (Note: the total hasn’t yet been updated.) The shootings thus occurred between Friday evening and early Sunday morning. It’s not over yet as I write this on Sunday evening. No wonder there were news trucks and live reporters from local stations also stationed outside the ER.

According to the Washington Post, scientists are still fighting about whether Covid-19 came from a natural host transmitting it to humans or a leak from a Wuhan lab. Both scenarios have problems—for the former it’s that the animal host has still not been identified. I suspect this will eventually be settled, though I don’t have a dog in this fight.

Also from the WaPo, click on the screenshot to watch a 5½-minute video on whiteness.  I gave in and watched how I’ve failed in many ways. Be my guest by clicking on the screenshot below. It’s  pure Kendi-and DiAngelican ideology, with not a word of dissent. The Washington Post is no longer an organ of objective journalism; like the New York Times, it’s become a vessel for social engineering and for purveying ideology, even to schoolchildren. 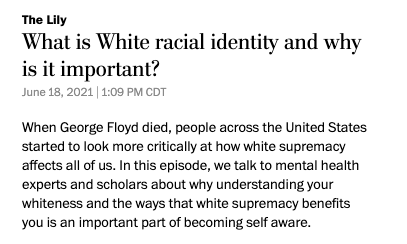 According to the narrator, this is only the first in a series of videos on the invidious nature of whiteness.

Via the Toronto site BlogTO, Diana MacPherson tells us that Toronto is installing “duck platforms” in its harbor to prevent ducklings from drowning. Ducklings have to get out of the water several hours a day to dry off as they have no way to waterproof their feathers (they get feather oil from their mother sitting on them). To prevent waterlogged babies, Toronto is installing these platforms that ducklings can climb onto and dry off: 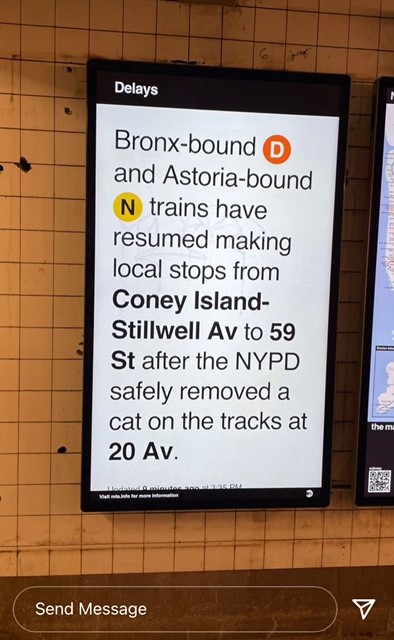 Stuff that happened on June 21 includes:

Nobody was hurt and no damage was done to the Japanese target, Fort Stevens.

The Japanese used child soldiers, aged 14-17, as front line combatants on Okinawa. Here’s a photo of some of them:

Here’s the FBI’s wanted poster before they found the killers: seven men, including KKK members, were convicted (maximum sentence was ten years in jail!), and one additional killer was not convicted until 2005 (see below). 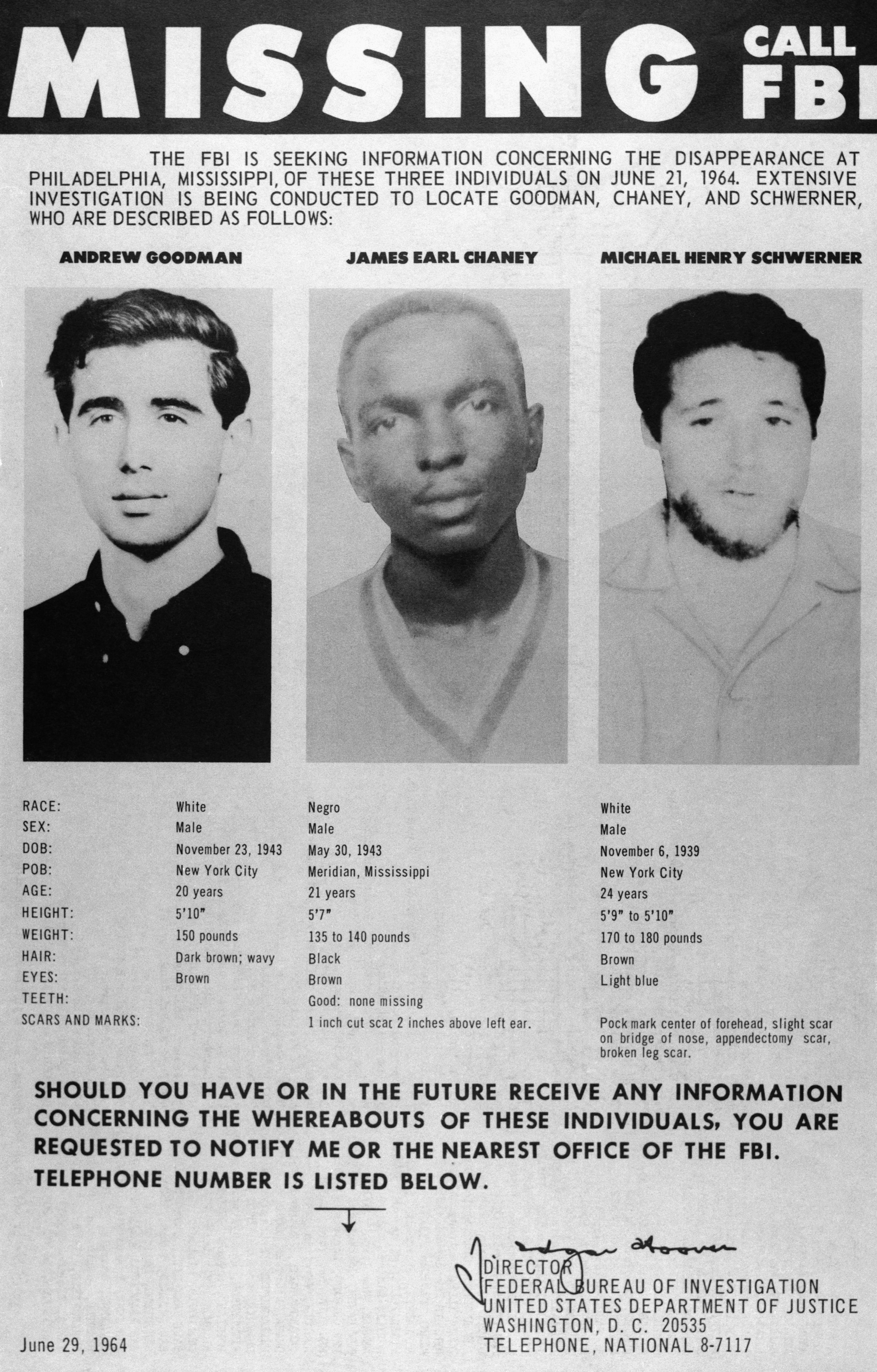 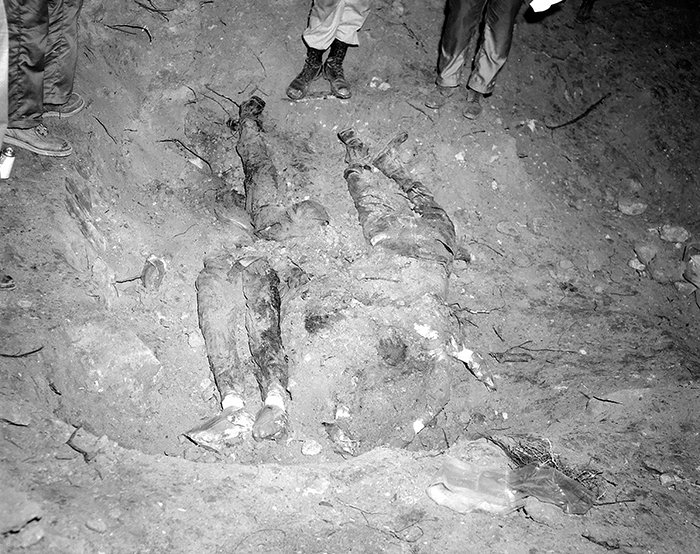 Here’s a famous picture of two defendants who got off. The caption: “The main suspect were the local sheriff, Lawrence A. Rainey (above right), his deputy Cecil Price (above left) and 16 other men, all of whom were allegedly members of the Ku Klux Klan. They were charged with violating the civil rights of the victims.” Rainey is dipping a chaw of tobacco. 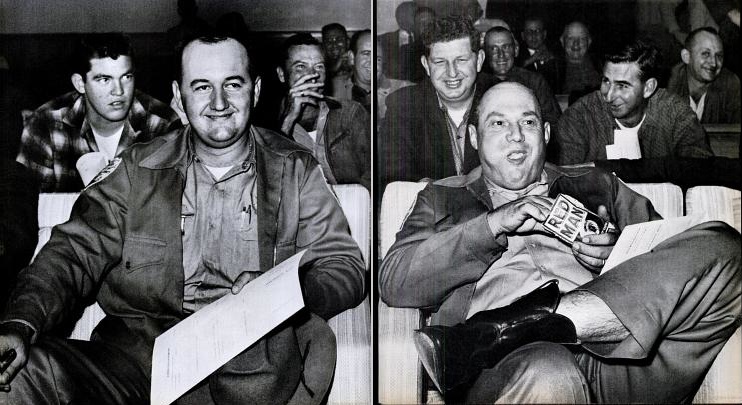 As I wrote five days ago, some Republican Senators are trying to get a Constitutional Amendment through Congress to prohibit flag burning (it would then have to be approved by 3/4 of the states). This will not stand.

This bit by Dave Chapelle on Jussie Smollett (said to be a French actor pronounced “Juicy Smole-yay”) is one of his funniest pieces. Trigger warning: strong language including n-word.

The unfortunate but endearing cat carried several mutations. Here’s a photo from the WaPo:

Those who “passed” on June 21 include:

Meanwhile in Dobrzyn: Hili is full of herself, as usual (her views are always correct, so she’s made a tautology):

Hili: I’m proud of my correct views.
A: Which ones?
Hili: All of them. 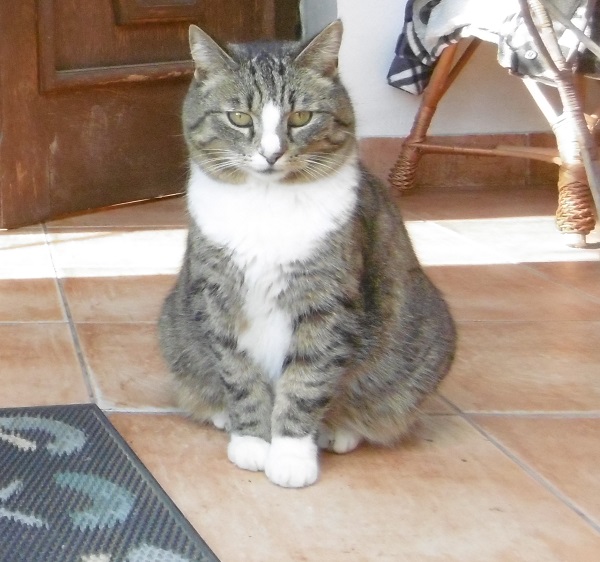 From Bruce. BYU is “Brigham Young University” in Provo, Utah, a Mormon school. When I was younger and collected college tee-shirts, I went into the BYU bookstore to get one of theirs, but was kicked out because I had a beard and mustache. Jesus couldn’t go to BYU! 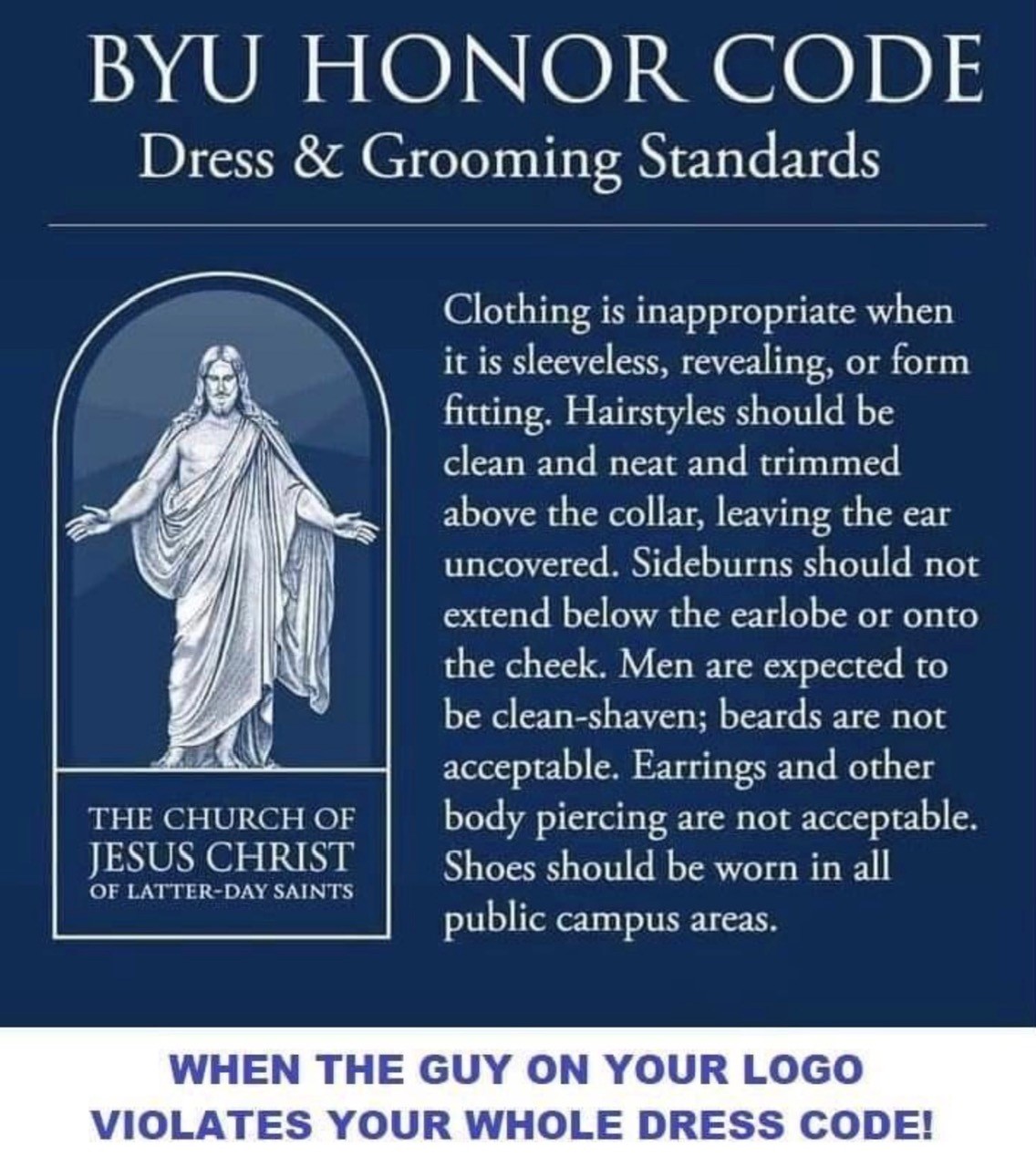 A photo from Barry, which he labels, “Cut your own fucking grass!” Let’s hand it to the Scots, though: they mowed a couple of feet into England! 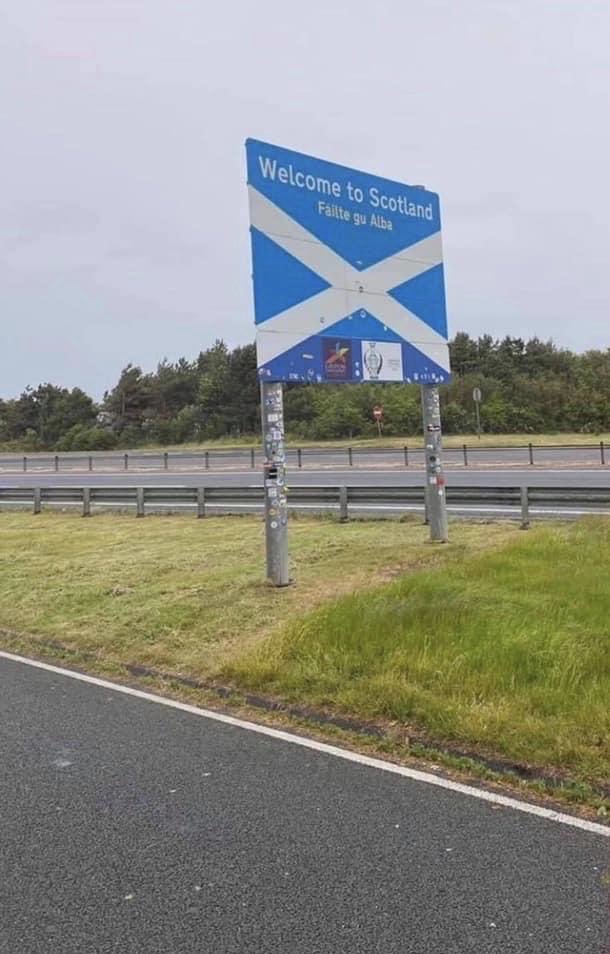 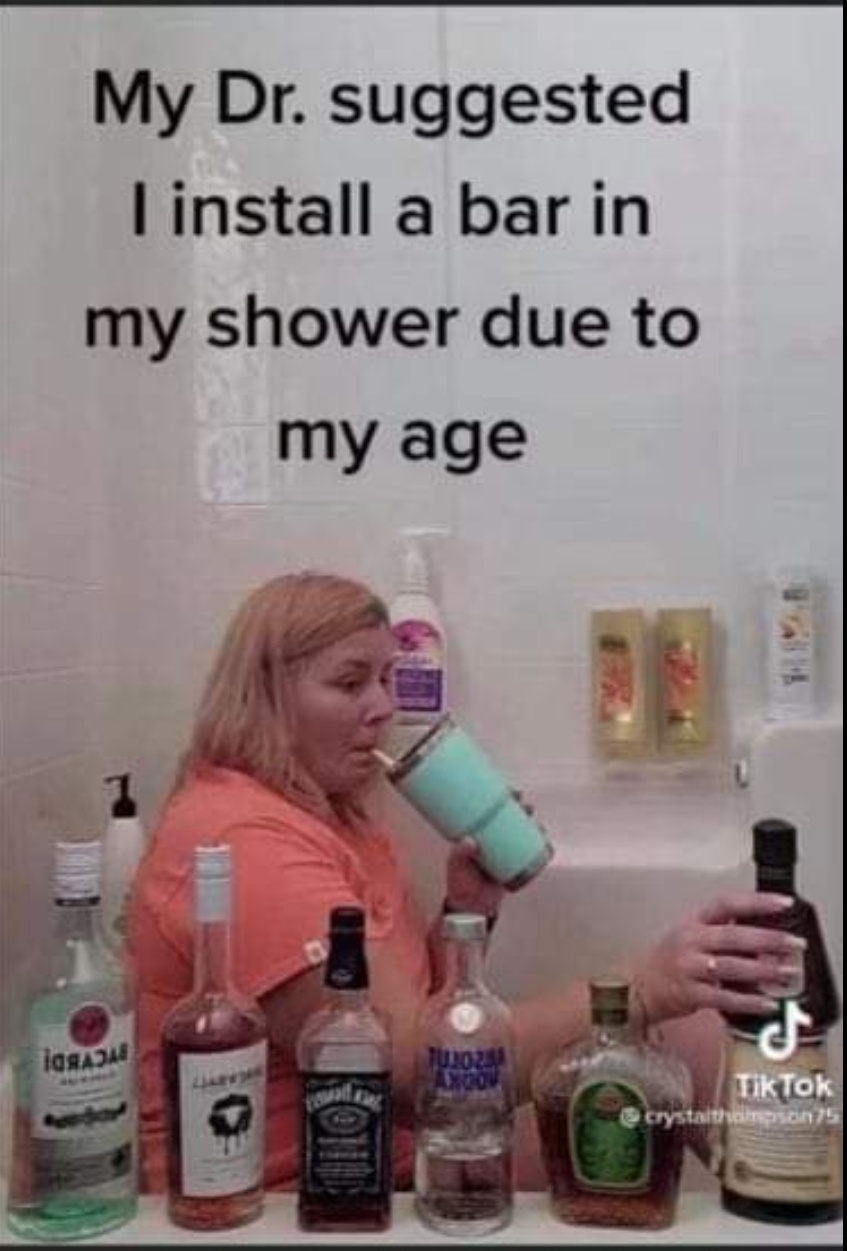 Masih talks about the new election for Iran’s President, won by a hard-liner. You may not agree with her on the boycott of Iran, which Biden is going to soften considerablyu, and I dislike imposing hardships on the Iranian people, who by and large oppose their theocracy, but if you don’t want Iran to have the bomb, what does one do? I am convinced that any Biden deal may marginally stall Iran’s acquisition of nuclear weapons, but won’t by any means stop it.However, I don’t agree that foreign heads of state should be barred from entering the U.S. unless they’re liable to arrest.

On BBC, I talked about the victory of boycott campaign: Now Iranians call on Biden administration to bar Ebrahim Raisi from entering the US like the way they banned Austrian president Kurt Waldheim. Iranian lives matter more than the nuclear deal. pic.twitter.com/fhqz50LUXF

Tweets from Matthew, who, like me, loves ferrets and stoats, even though they’re voracious predators. Here’s Moose the Ferret having a great time.

Bats, whales, and now add tree mice to the groups of mammals who use echolocation! Mice in the genus Typhlomys have very small eyes and are nocturnal.

Of this tweet, Matthew notes, “n.b.: the cladogrm isn’t quite right (e.g., “marine mammals”) but the variety of vaginas, etc. is”. Can you spot the phylogenetic errors?

I spent most of this weekend making a figure for a BioEssays review. What do you think? pic.twitter.com/6iVOl4wBWA

I got this too late to put up yesterday, but by gum, FIFTY FIVE YEARS? Sunrise, sunset. . . .

A while back, I went through a few days when I was obsessed with watching watch restoration videos. As it says at the end, “Watch again.” The original video with the restorer is below the first one.  I can’t fathom the dexterity, patience, and skill required to do this kind of work.

A whole thread of medieval cats licking their butts! They observed the behavior fine, but the depiction of the moggies, as usual, leaves a lot to be desired. There are more in the thread: