Seriously, people, send me your photos (good ones, please), as this feature is running out of submissions. I have but a handful in the hopper.

Today we have another installment of Doug Hayes’s famous “Breakfast Crew”: the birds (and mammals) he sees at his home feeder in Richmond, Virginia. Doug’s captions and IDs are indented, and you can enlarge his photos by clicking on them.

The 14th installment of the Breakfast Crew. The past couple of months were pretty quiet around the yard as the birds retreated to the park and more wooded areas of the Forest Hill neighborhood (Richmond, Virginia) to nest and hatch the next generation. Now many of the gang are back with the new crop of babies. The robins are still building nests and I have seen pairs of cardinals hanging out together engaging in “courtship feeding” in which the male feeds the female. Round two of baby birds soon?
A Carolina wren (Thryothorus ludovicianus) and two babies (there is a third one on the ground who eventually joined the others) were the first of the new crop to show up in the yard. 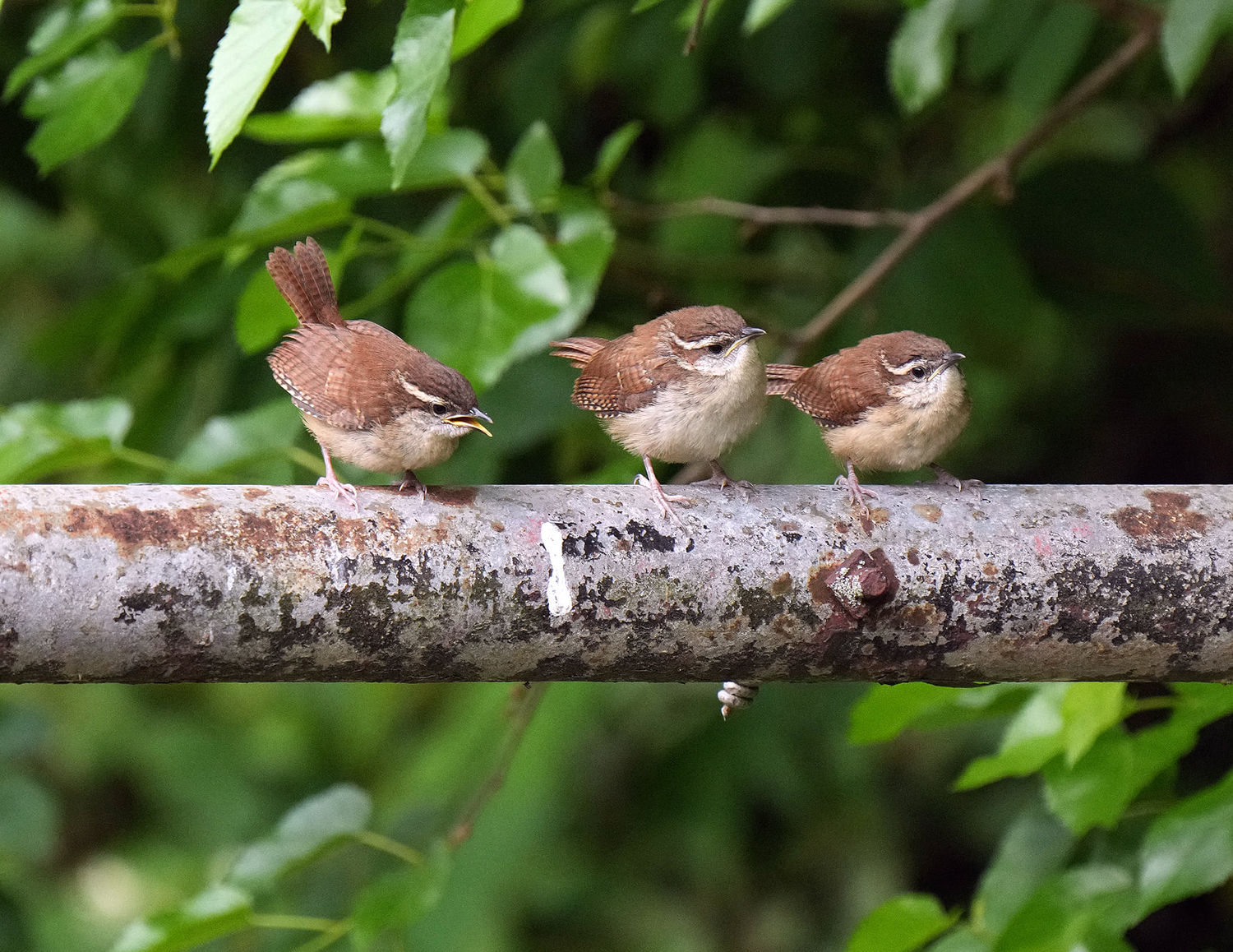 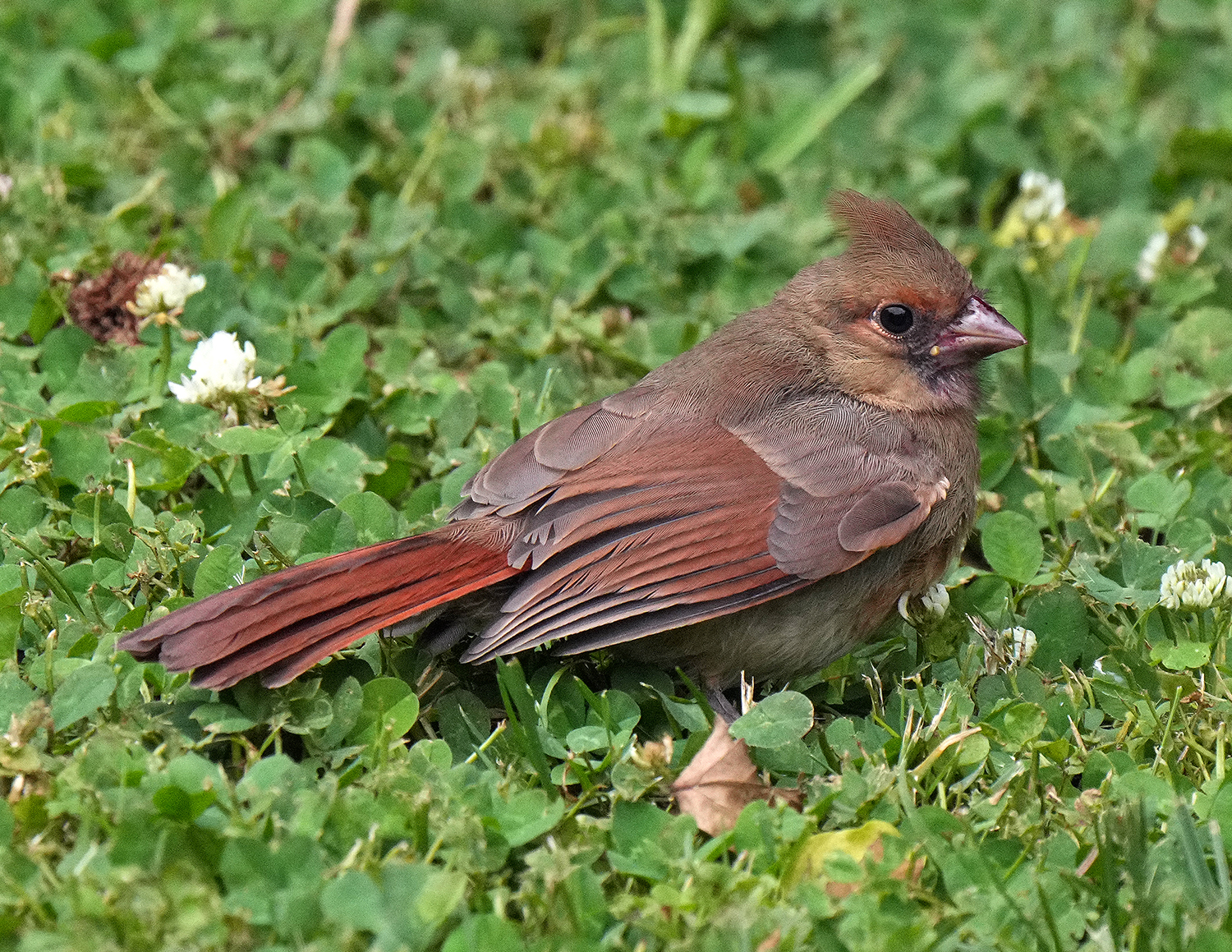 We got a bumper crop of European starlings (Sturnus vulgaris) this year. This is one of a batch of five that follow one adult to the feeders. They are quite comical as they squabble among themselves for a spot at the suet feeders, shoving and pecking at their siblings for a choice spot. This little guy was puffed up to ward off the morning chill. 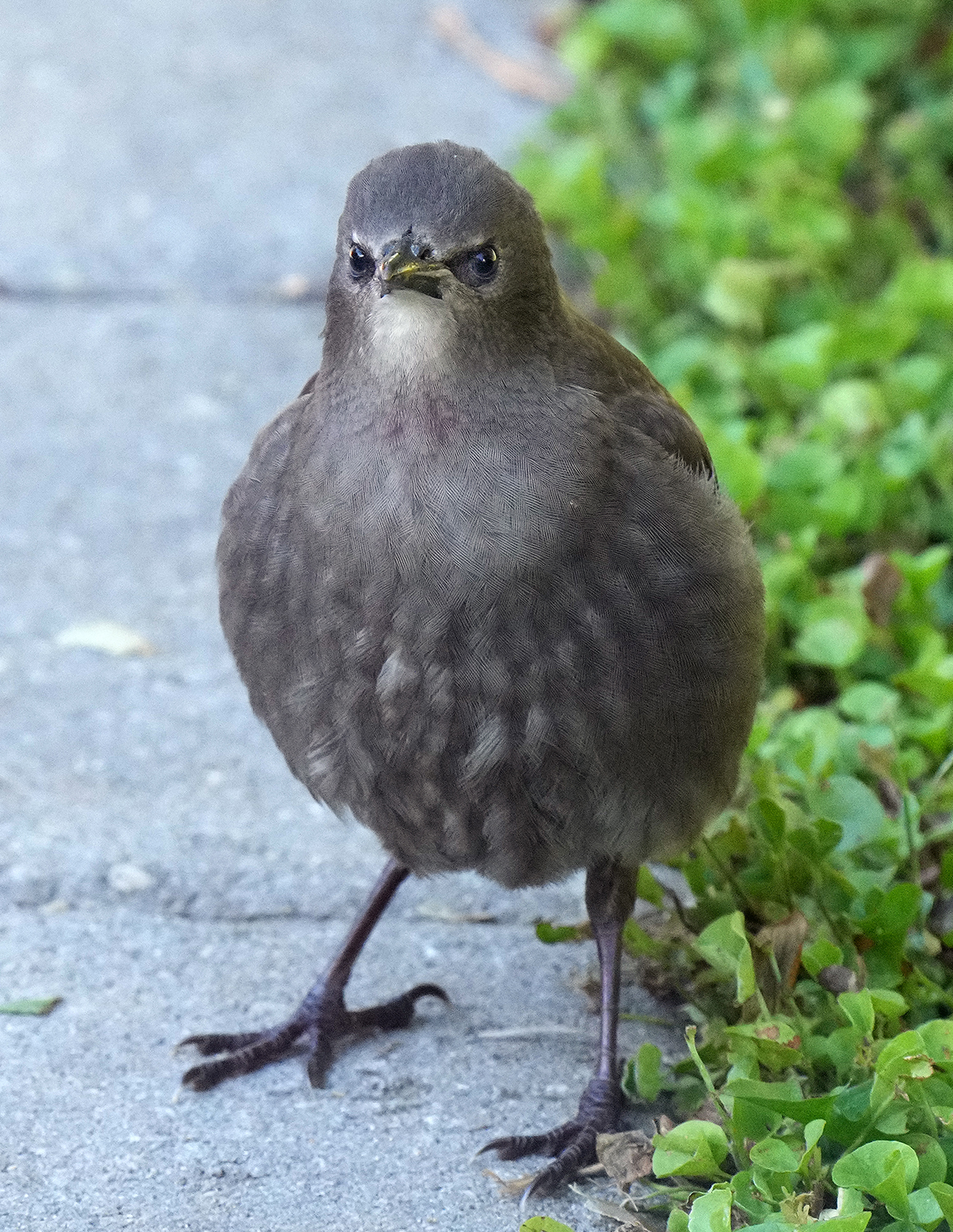 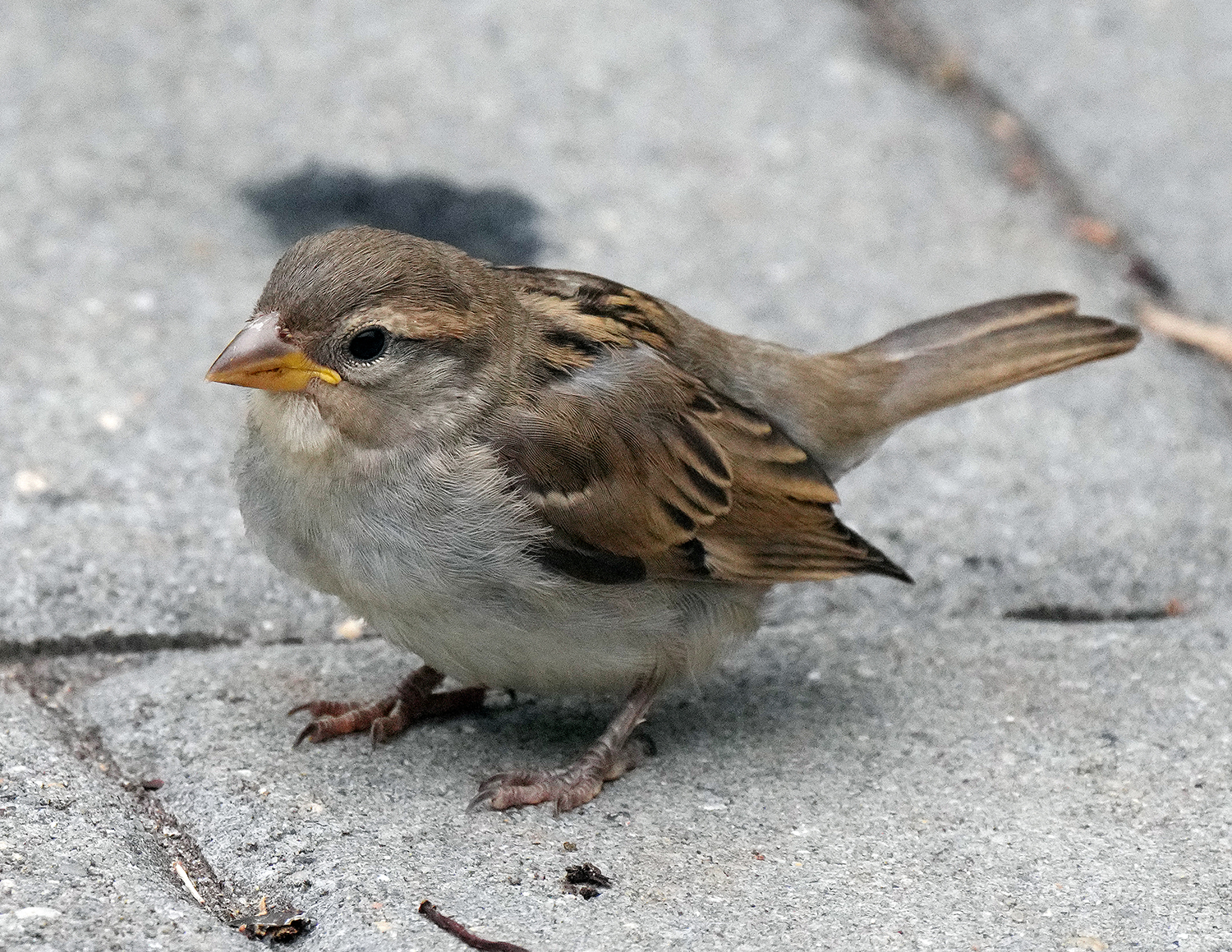 An adult common grackle and a juvenile (Quiscalus quiscula). The grackles’ numbers have exploded also. It is not unusual to see five or more at one time at the feeders. 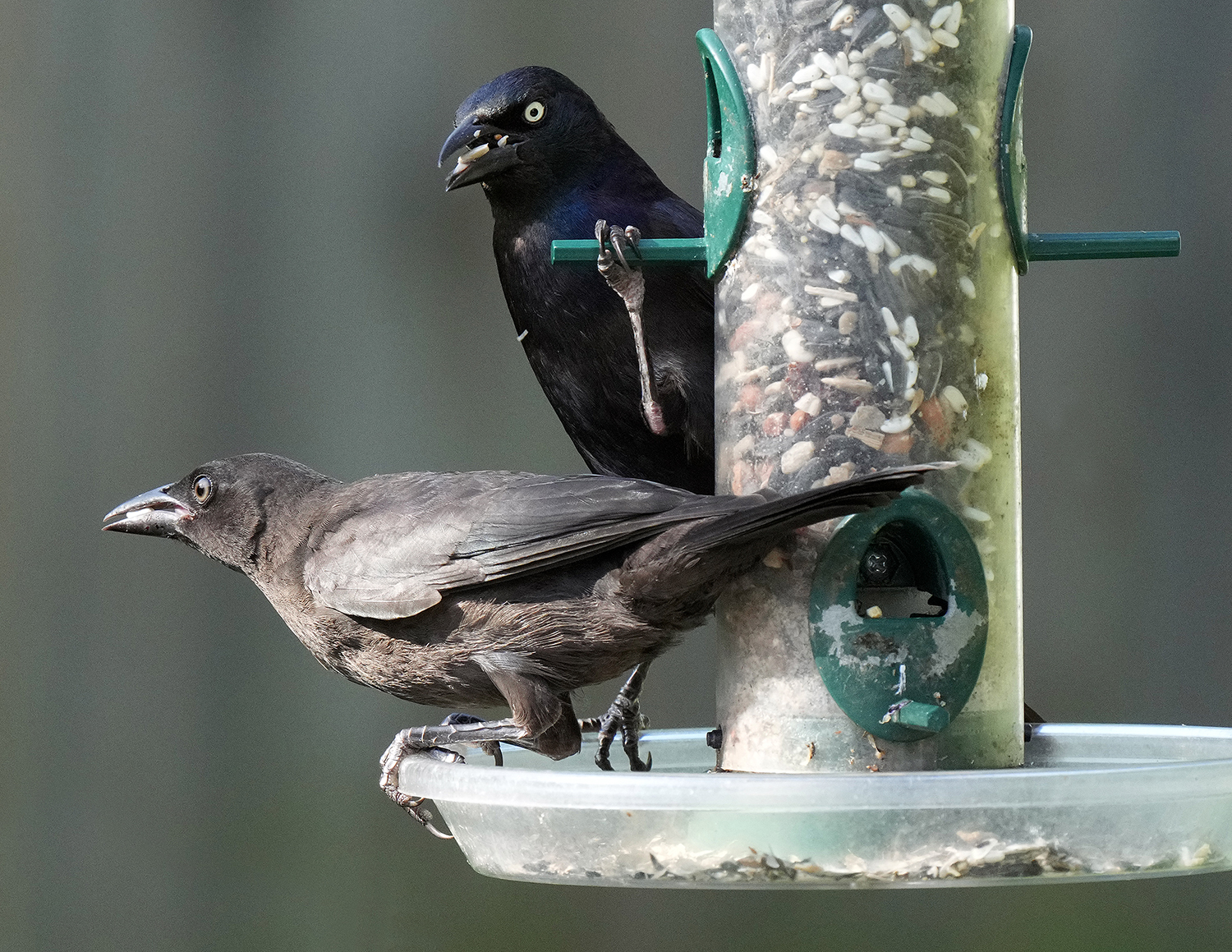 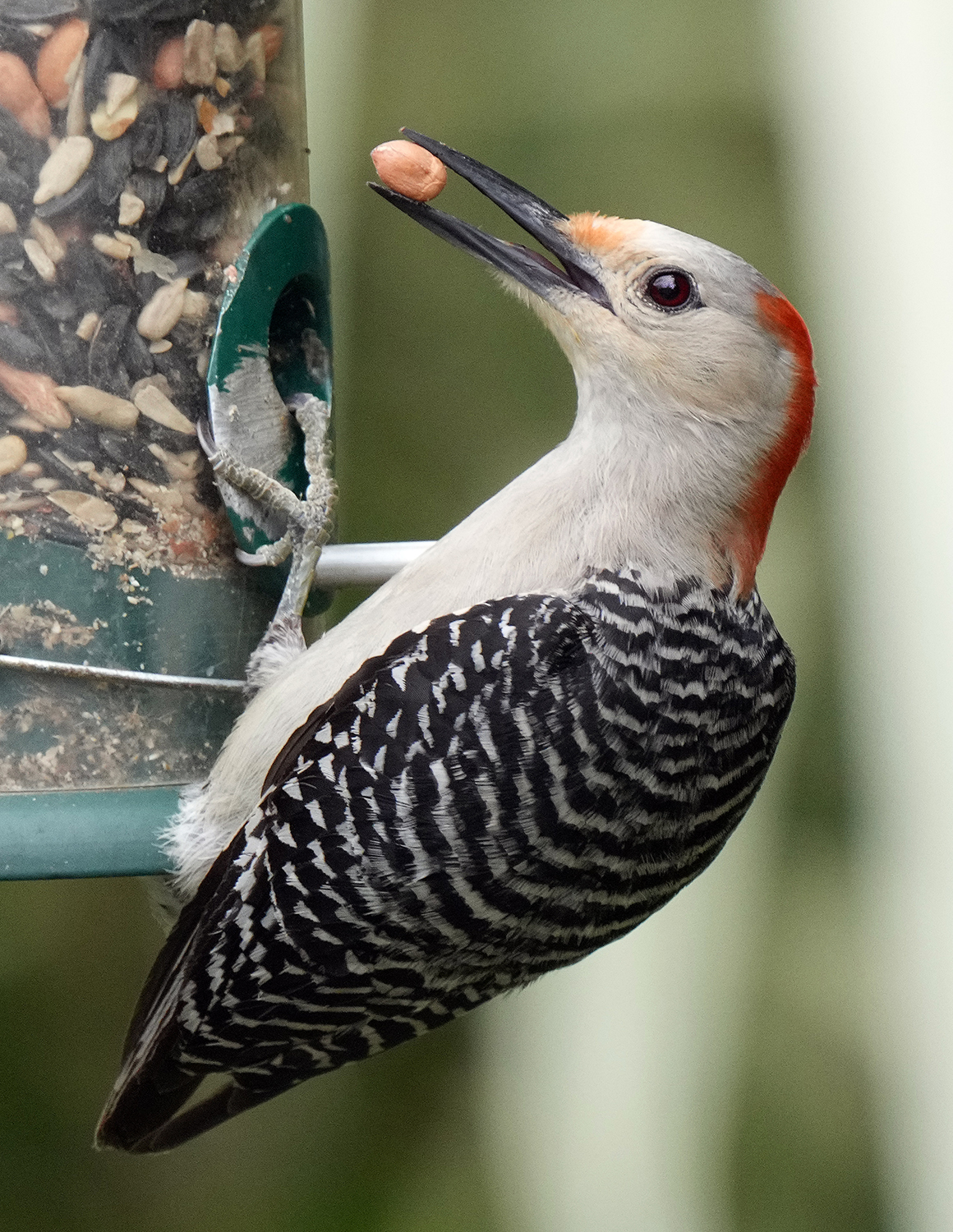 A rose-breasted grosbeak (Pheucticus ludovicianus). I had seen this guy a couple of times. On this day, I saw him from the back and thought he was a woodpecker. When I finally got a good look at him, I didn’t have my camera handy. Fortunately, he returned in the afternoon and decided to hang out for a while. 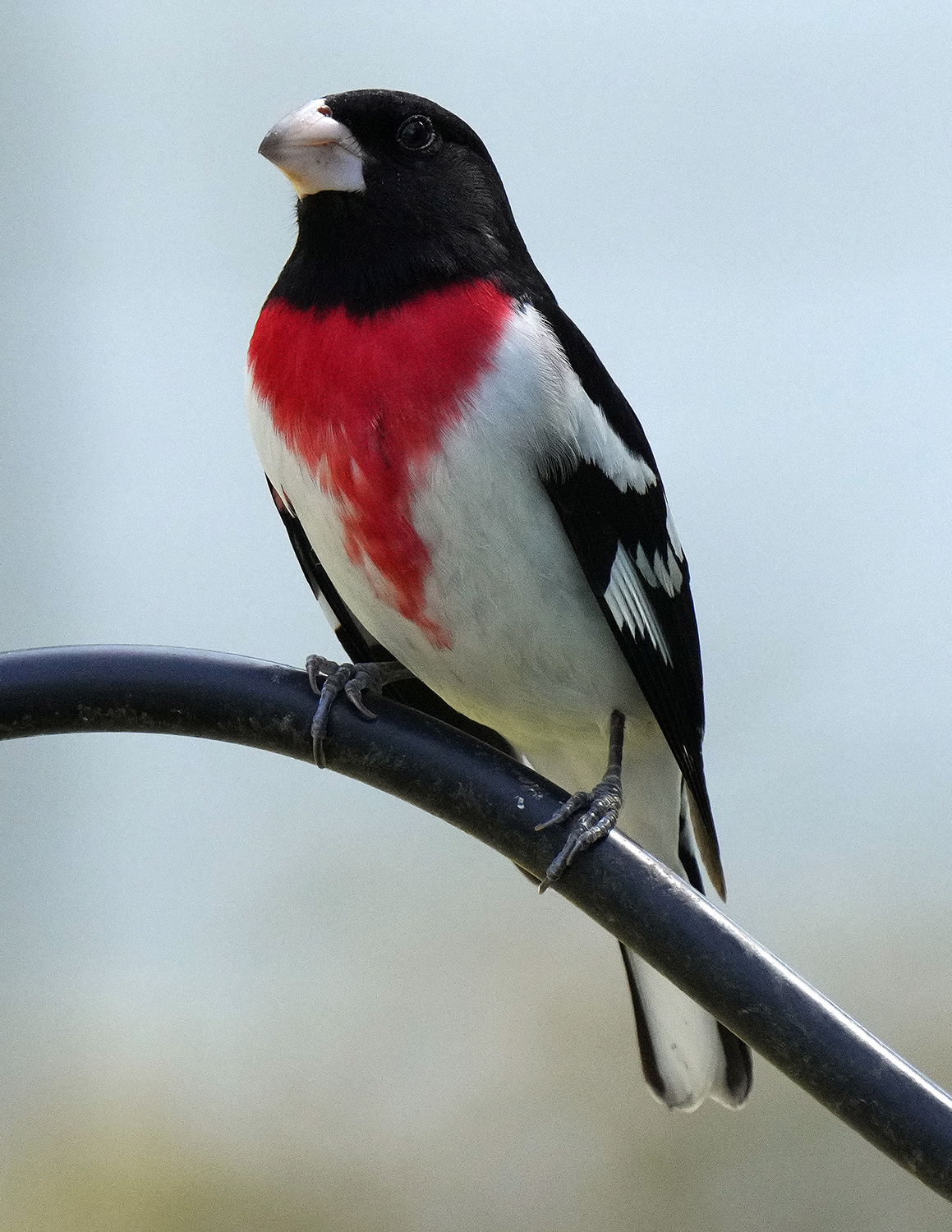 A pine warbler (Setophaga pinus). They usually stay in the more heavily wooded areas and the park, but this one decided to check out the feeders. 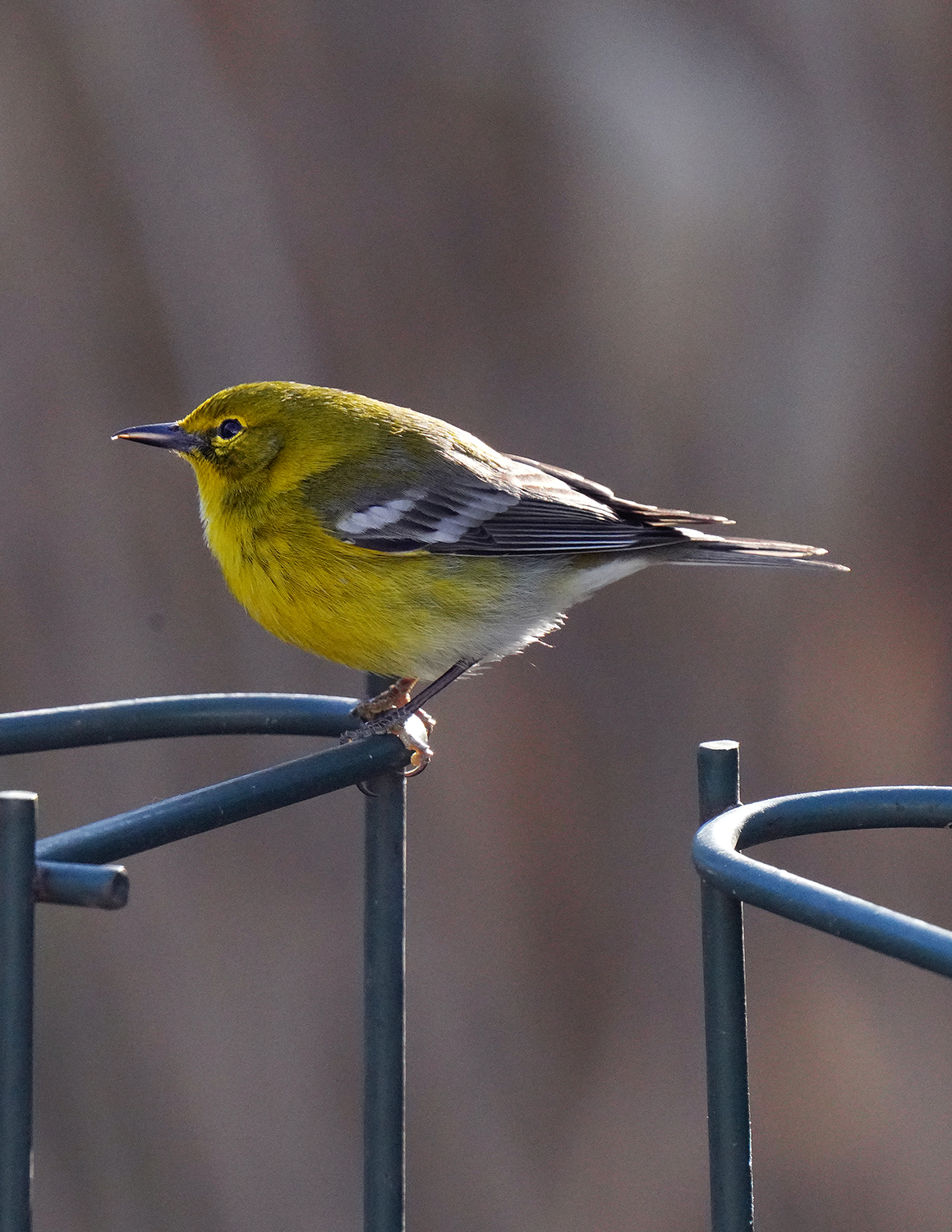 Eastern bluebirds (Sialia sialis) are quite common in the neighborhood thanks to all the birdhouses in the park and in backyards. 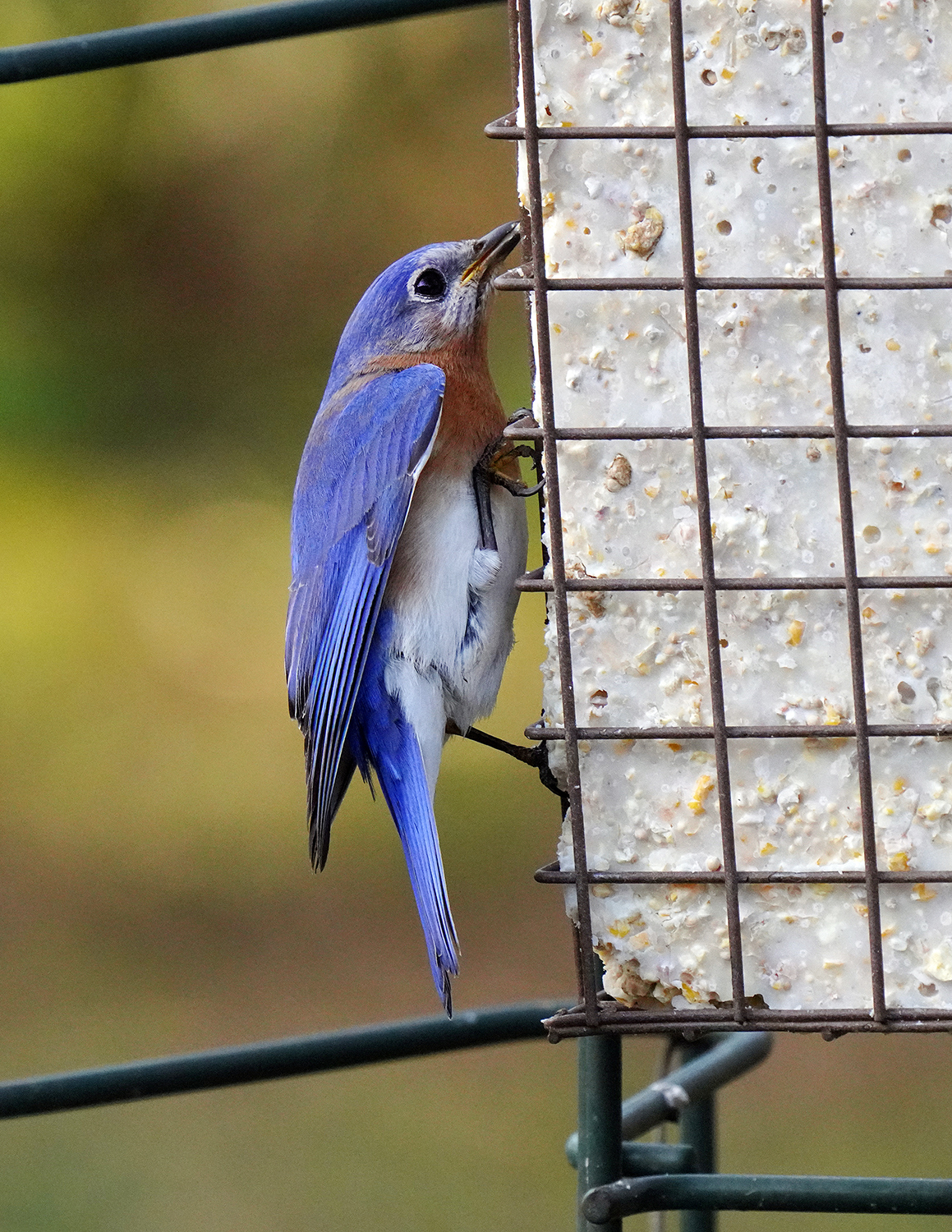 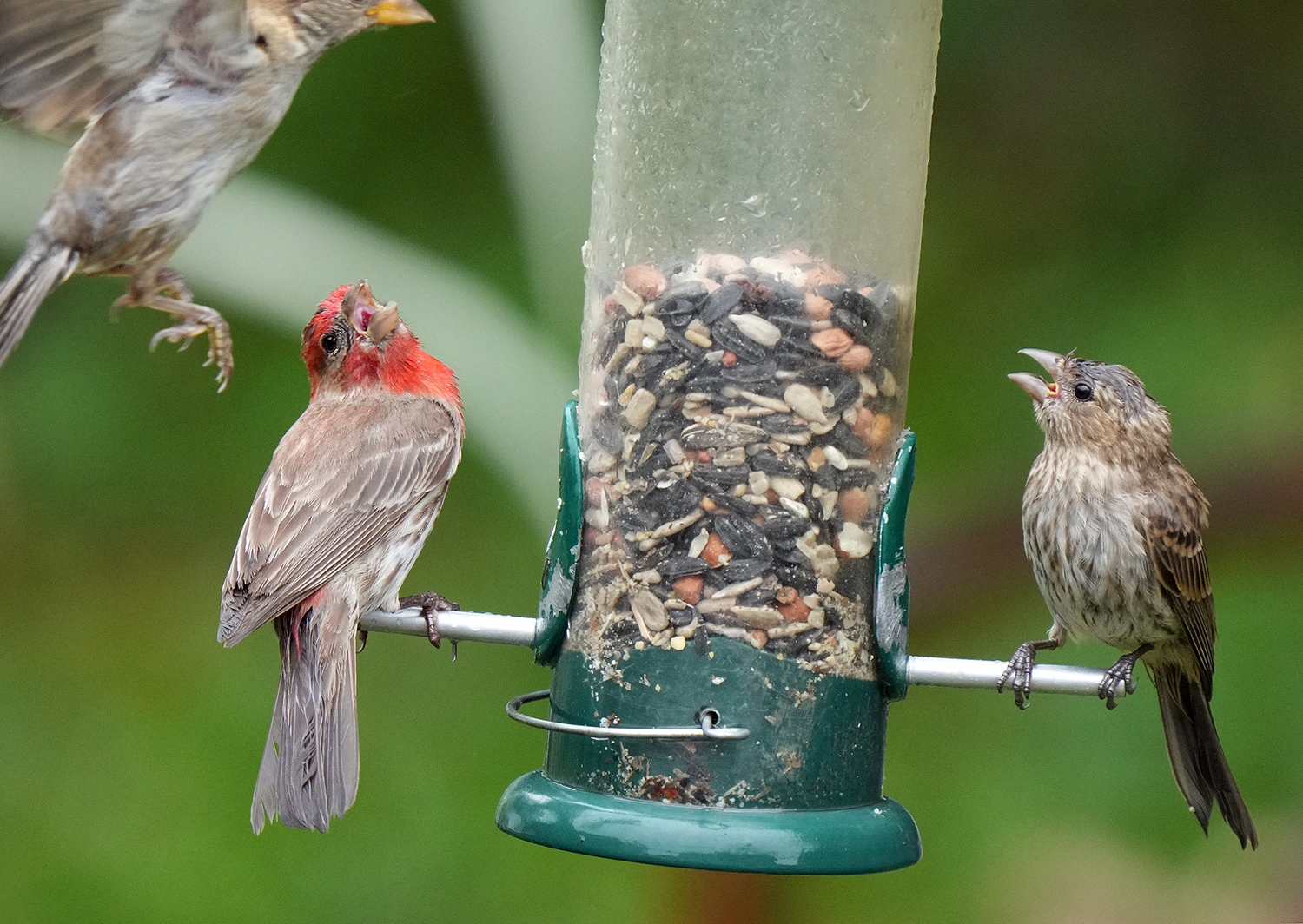 Chip Monk, the eastern chipmunk (Tamias striatus) peeks out from her home in our generator housing. She is becoming used to seeing me at the window and will watch what I’m doing for some time. 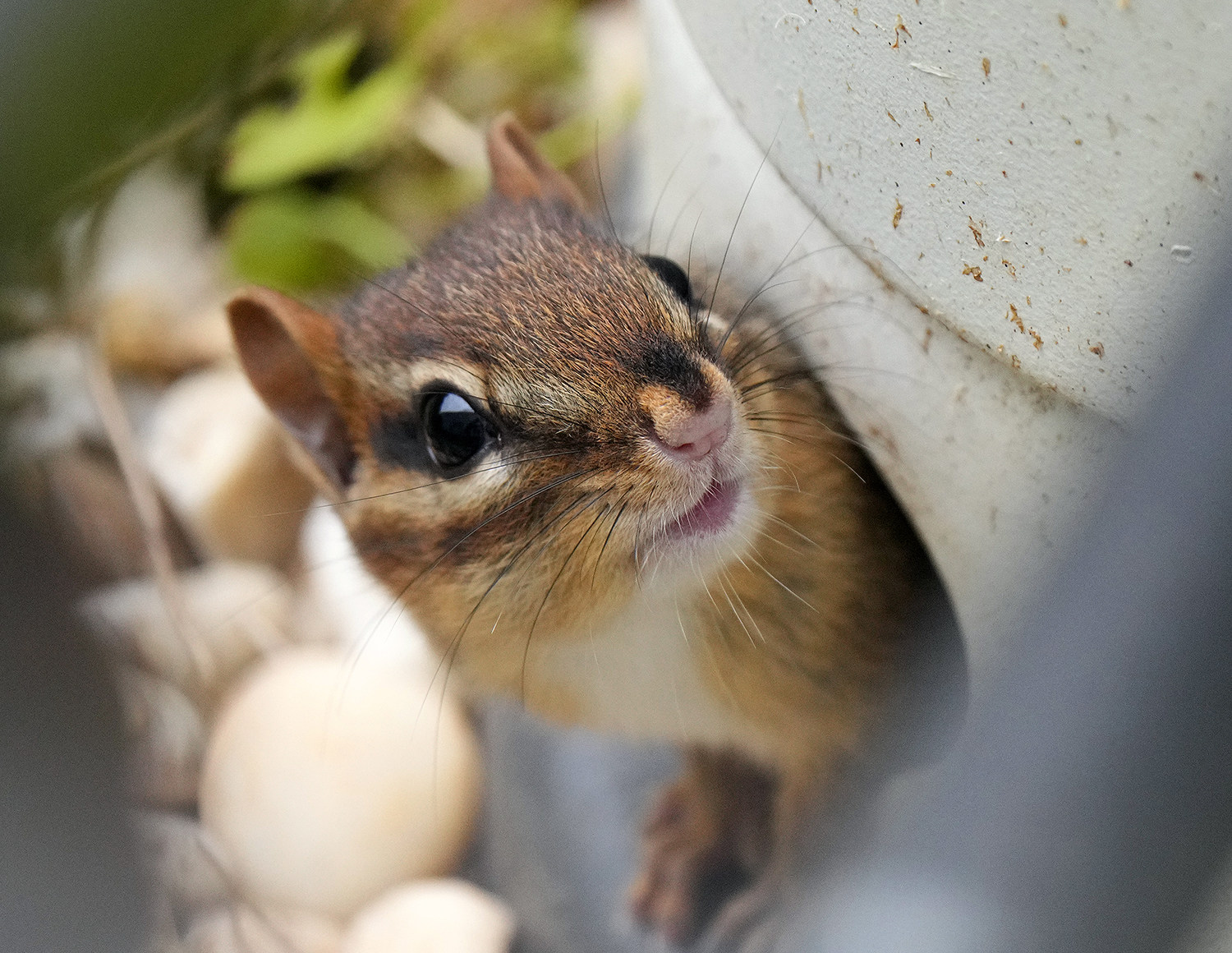 An eastern gray squirrel (Sciurus carolinensis) acting casual so I won’t notice him. These guys are quite the pests. The silvery areas on the feeder openings are where the squirrels have gnawed into the aluminum in an attempt to get at more food. I had some all plastic feeders and the squirrels destroyed them by chewing away the collar surrounding the opening, and getting a jackpot of seeds. 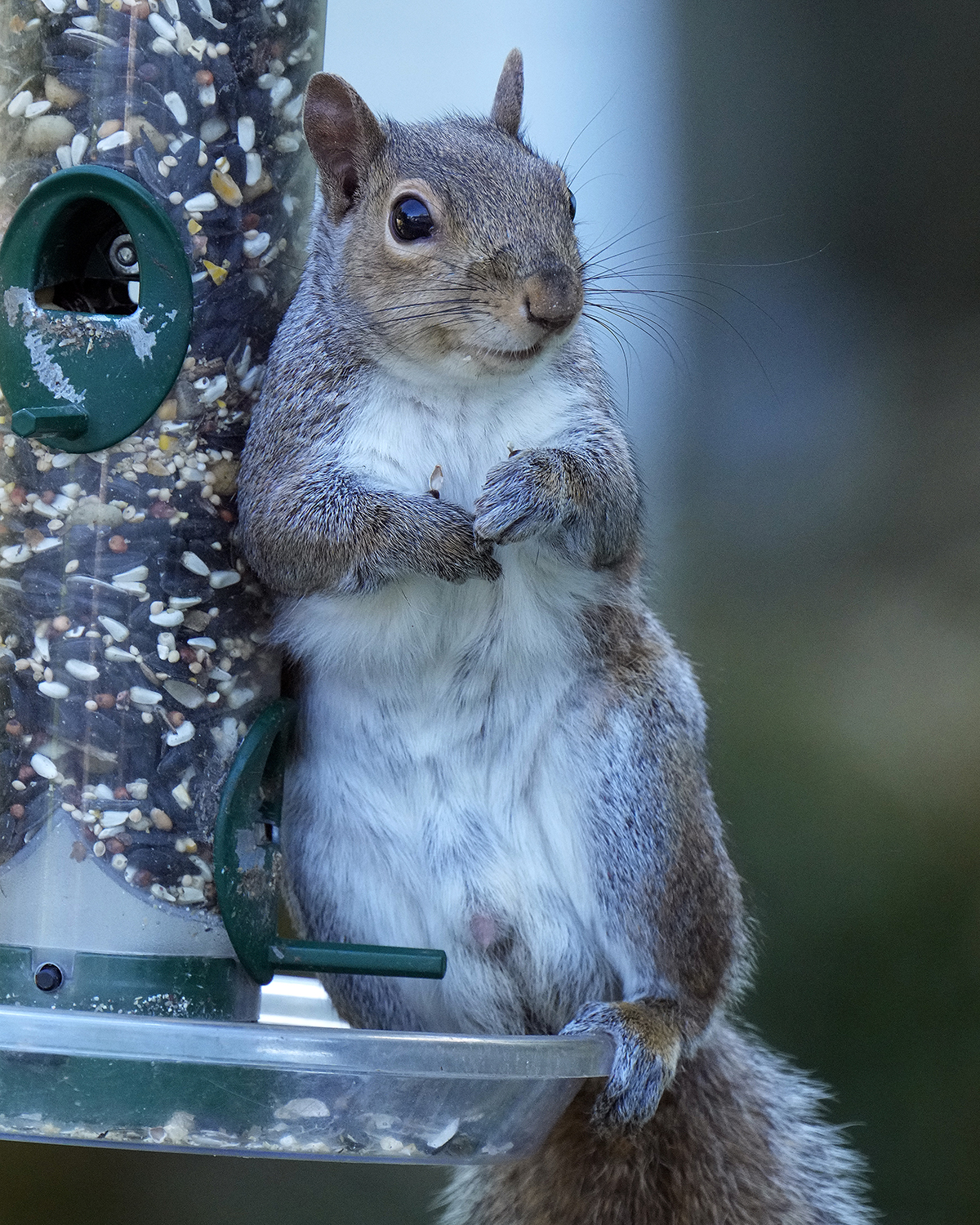