I don’t think it’s advisable to have a pet caracal (Caracal caracal), as they’re wild felids from Africa and central Asia, and it’s never advisable to keep a pet cat unless it can’t be released into its native habitat because of injury of other factors. But, as Russia Beyond reports, in Russia they breed them commercially, and so we have “Big Floppa”.  (Click on screenshot to read.) 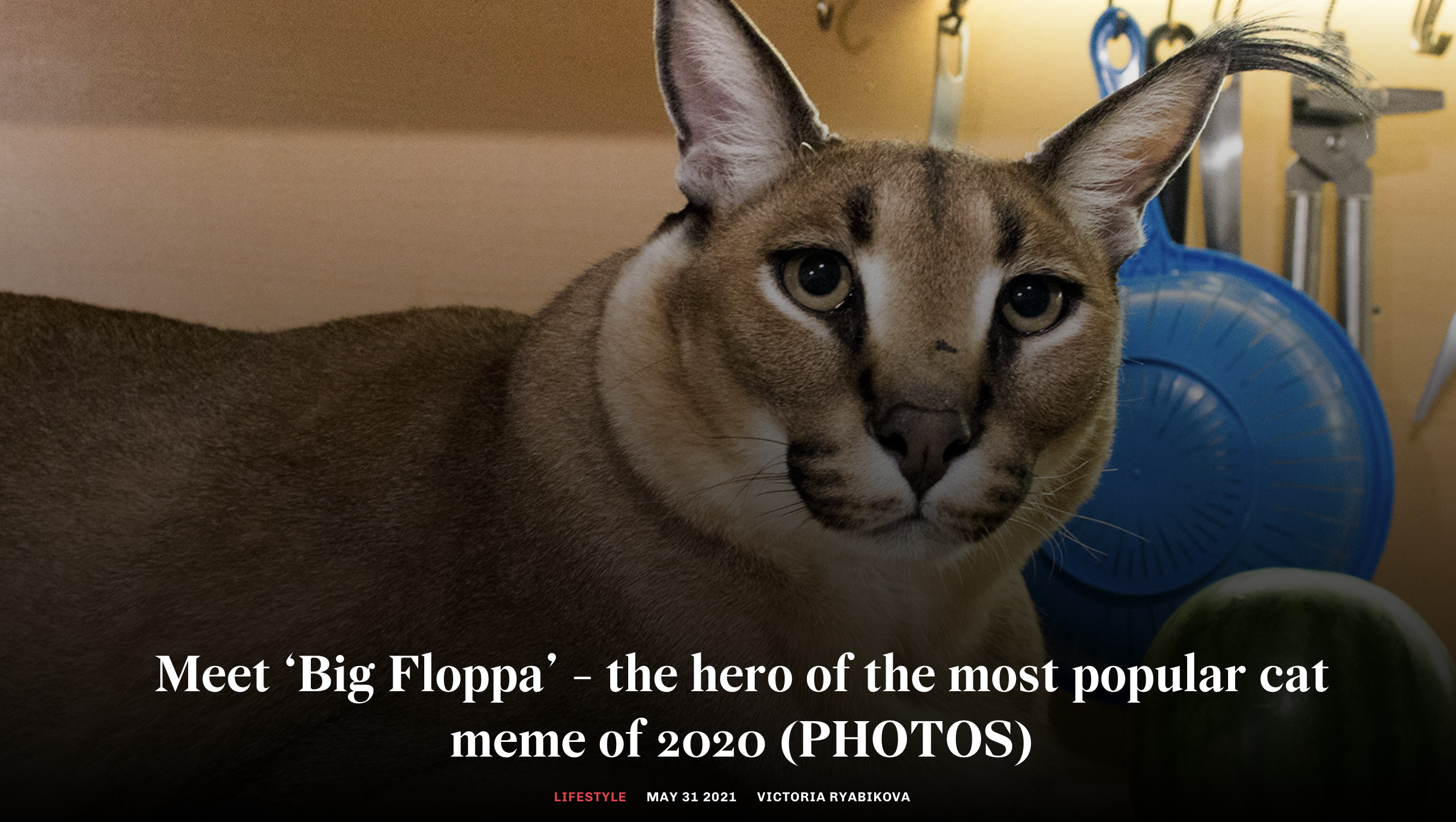 In April 2018, Andrei Bondarev, a videographer from Moscow, posted a photo of his “pet” enjoying his meal on his Instagram account – a giant short-haired cat with a large elongated nose, bright green eyes and enormously long tufted ears.

“To become a big cat, you have to eat a lot!” was the caption that launched the cat and his fellow cats, Matvei and Zhora, as bloggers. In 2020, the cat became popular on social media and websites, such as Reddit, under the name ‘Big Floppa’, or ‘Kot Shlyopa’. He got his nicknames from his ears.

In actual fact, his name is ‘Gosha’ and he is a caracal, a wild cat that looks similar to a lynx. Caracals are native to Africa, Asia and India, but Gosha was born on December 21, 2017, in a cattery specializing in wild cats in Ukraine. 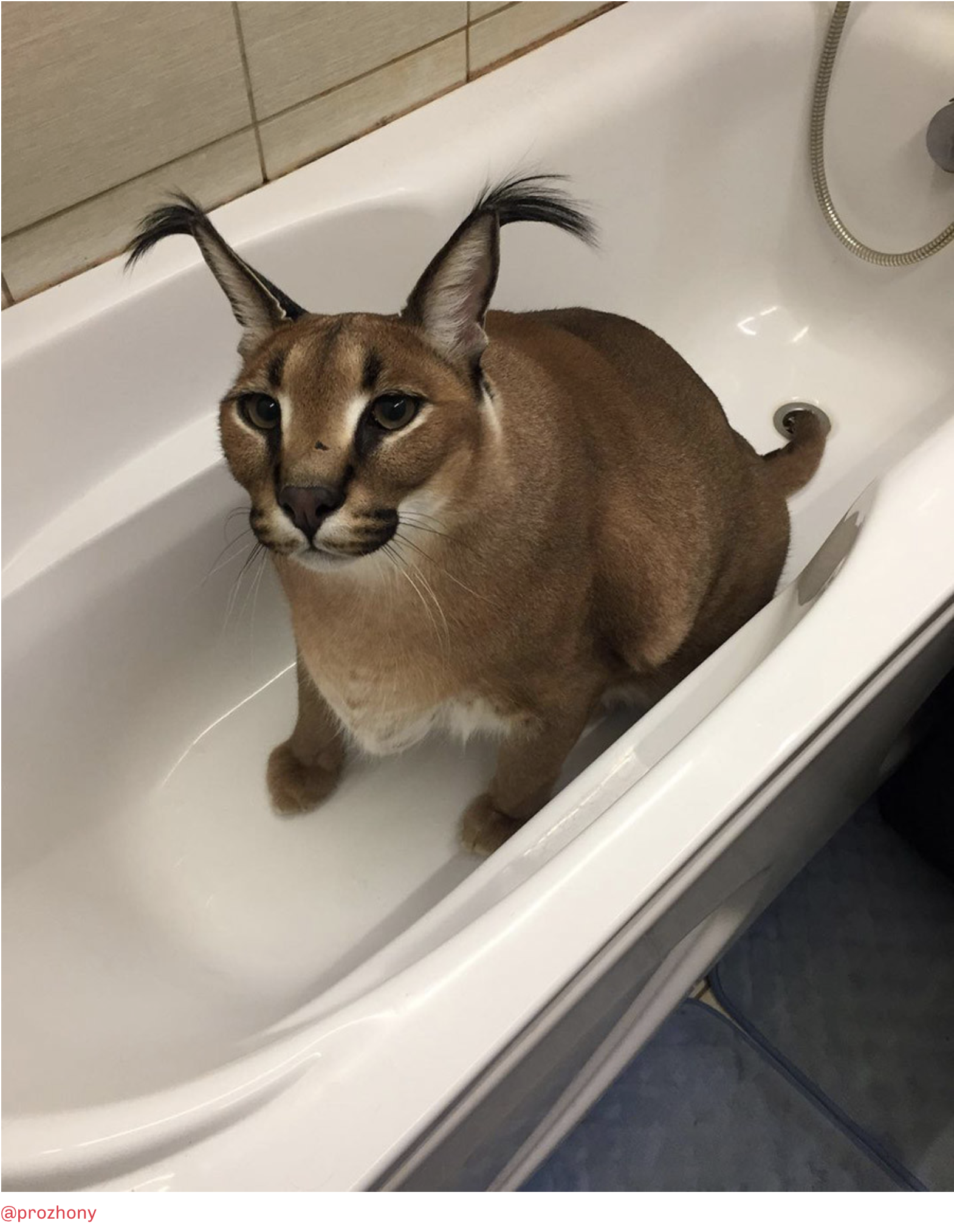 It took Georgy [full form of Gosha’s name] and his pet delivery couriers more than 24 hours in a minibus to get to Moscow. According to Yelena, for the first few days, he was afraid to walk  around the apartment; he hissed and hid, but didn’t refuse food. Gosha was “mentored” by Matvei – another cat the Bondarevs took in from an animal shelter, who is already over 12 years old.

“Zhora [cat number three, 4½ years old] was very offended at us for taking in someone else, and, for the first couple of weeks, he ignored Gosha and us. Now he is best of friends with Gosha,” Yelena said.

From an early age, Gosha chased toys and ran around with the other cats. The only difficulty was training Gosha to use the litter box; but, according to Yelena, these are “routine feline issues”. 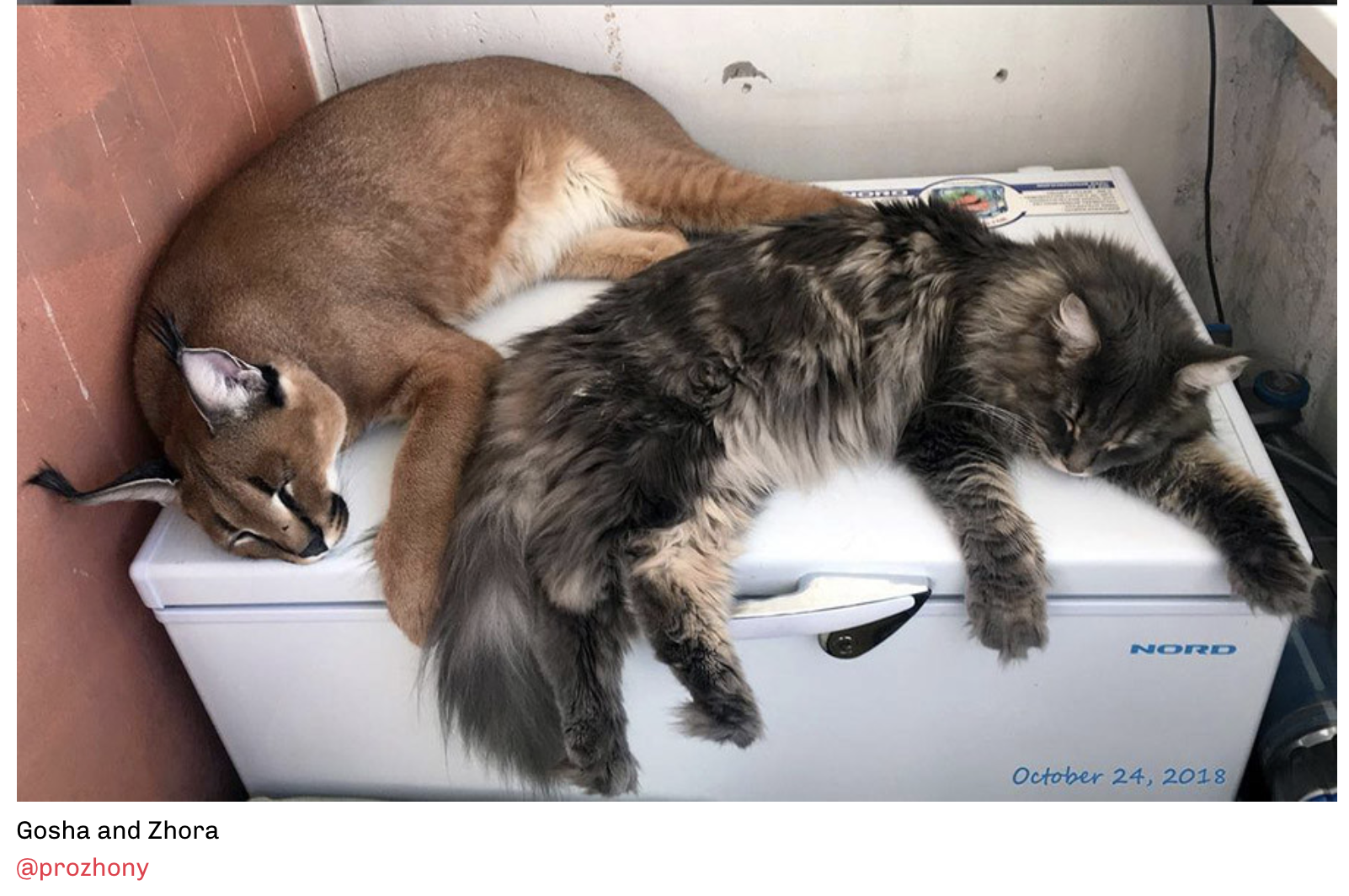 “Gosha is dominating and regards me as exclusively his human being and no-one else’s. He has quite a canine nature, he is very devoted and doesn’t like to be on his own. He is very cautious with people he doesn’t know,” Yelena says, describing the caracal’s character. 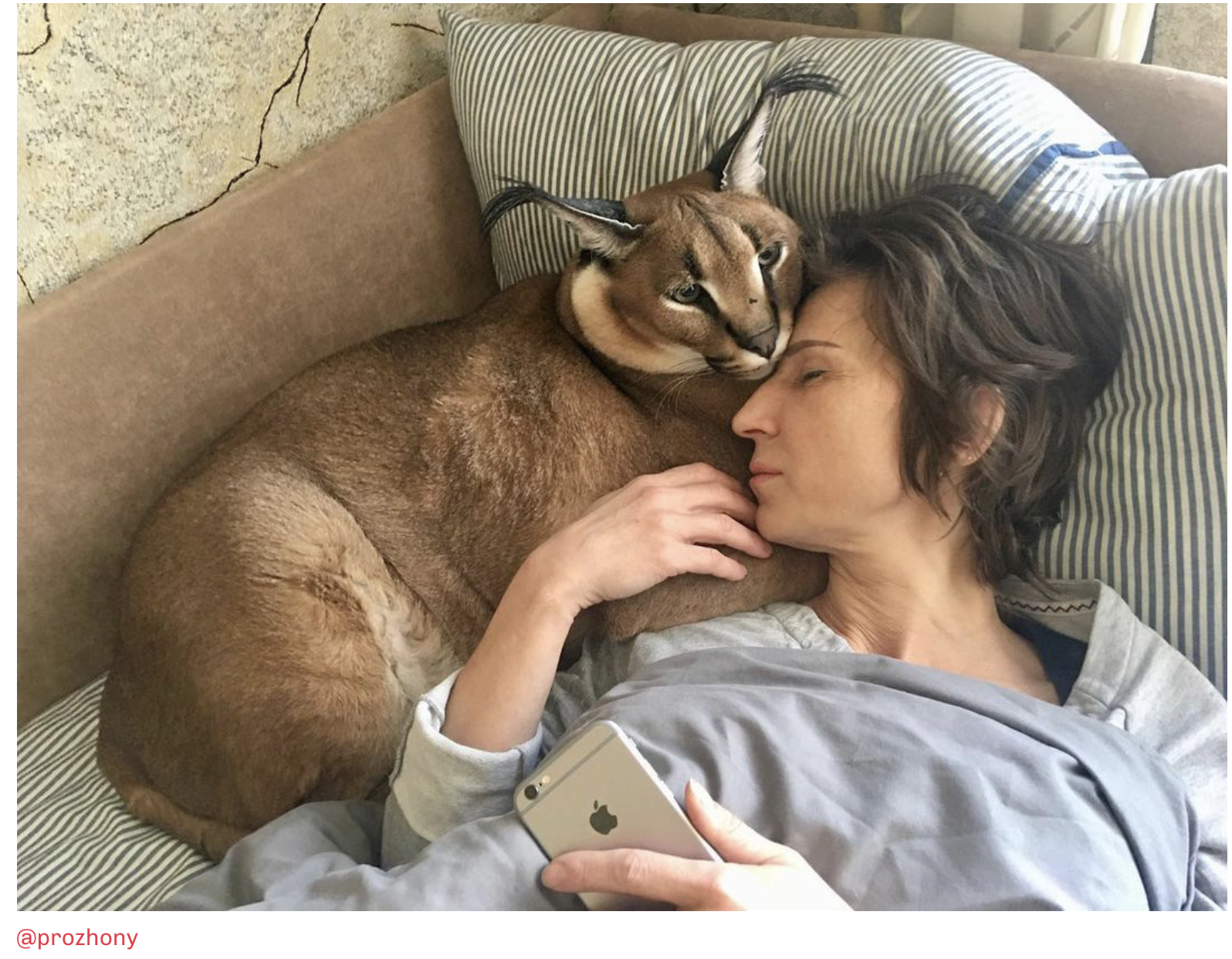 Oy, those choppers! (cm scale, so they’re about an inch long): 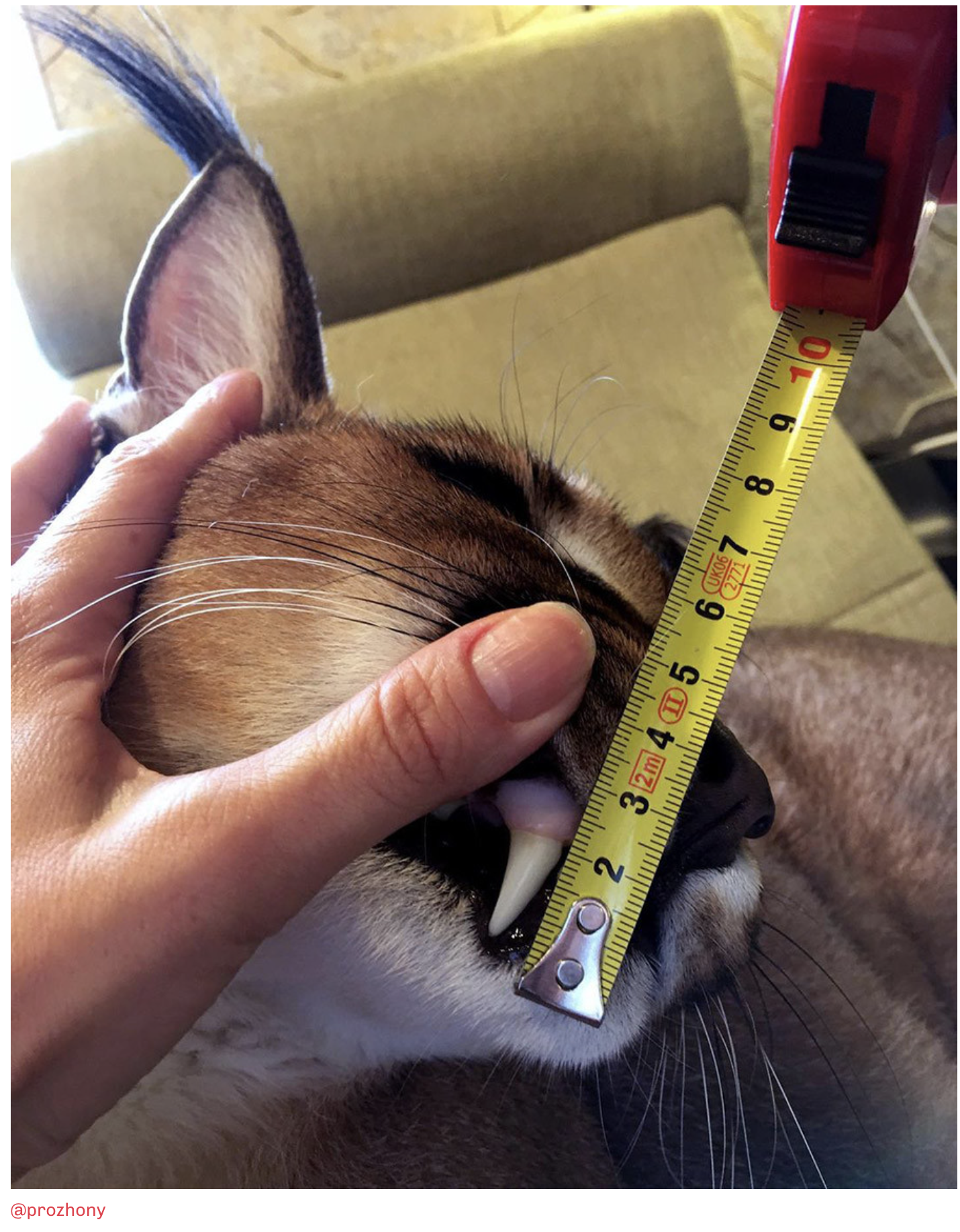 The only difference is his size, so you have to take more care and pay attention more. Accidental injuries you get when, for instance, playing with him are much more serious than from small cats. Of course, the degree of ‘destruction’ of the house also grows in proportion to the size of the cat. As for the rest – a cat is a cat in Africa, too,” Yelena says in conclusion.

Tummy rub? I don’t think so!  You can see more of Big Floppa on his Instagram page. 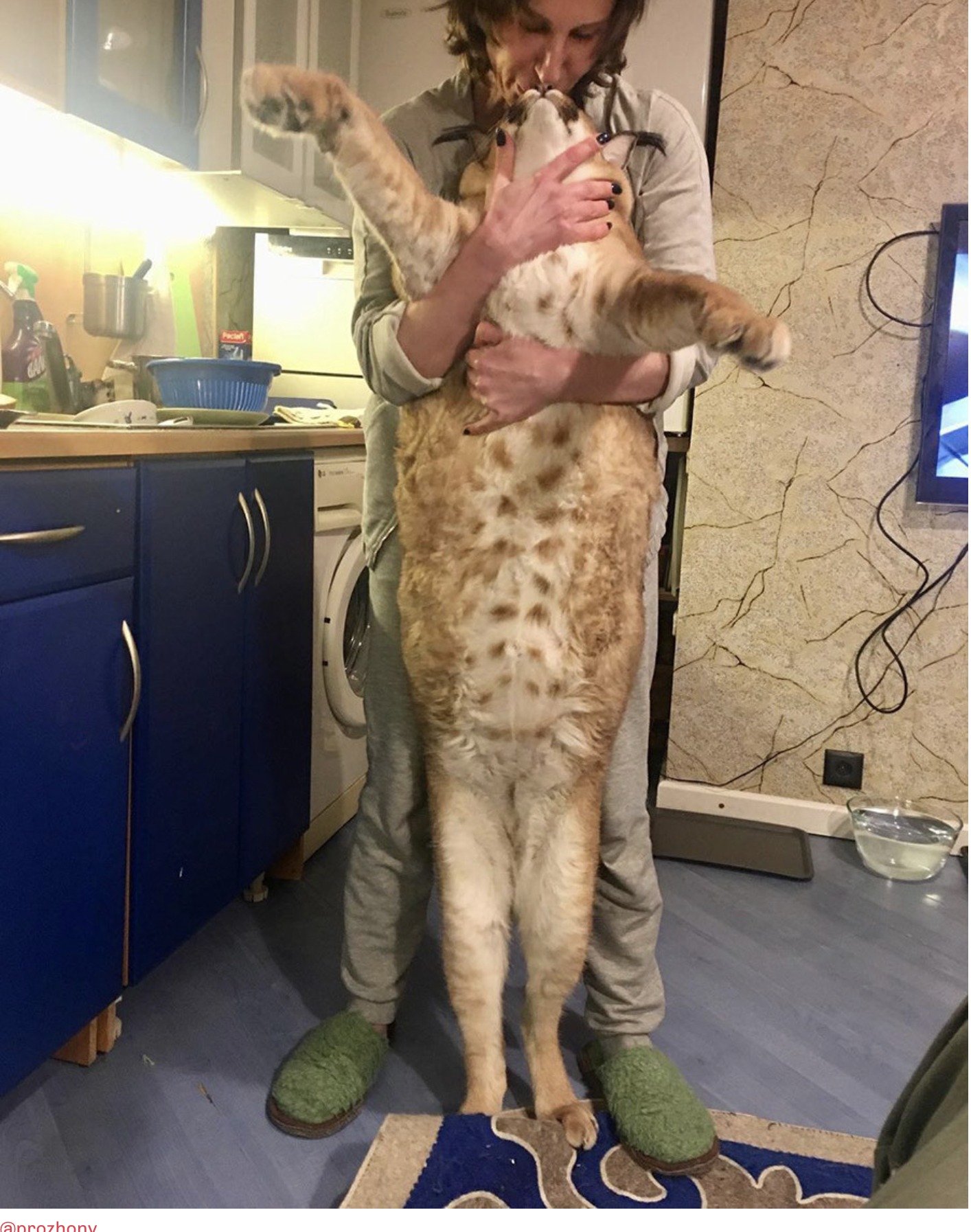 Here’s a cat interrupting a CBS News broadcast; I presume the fly is on the computer screen she’s looking at:

And here’s a mini-symphony on video written to accompany the caterwauls of a moggy. It’s not only an interspecies collaboration but an international collaboration. Be sure to see the vocalist!

In May 2021, I did a collab with a cat [see it here]. And then people from all over the world joined in! 🌎 🎶 The Kiffness on Spotify: https://bit.ly/Kiffness

“Super active hairless cats, Polina (Peterbald) running on the wheel, made by One Fast Cat, and a cranky (Sphynx) shown in the background.”