Below are two videos (the first, at 12.5 minutes, is a bit long) showing the difference between the only two First World countries that still have the death penalty: Japan and the U.S.  Here, from Amnesty International via the BBC, is a map of countries that still execute criminals: 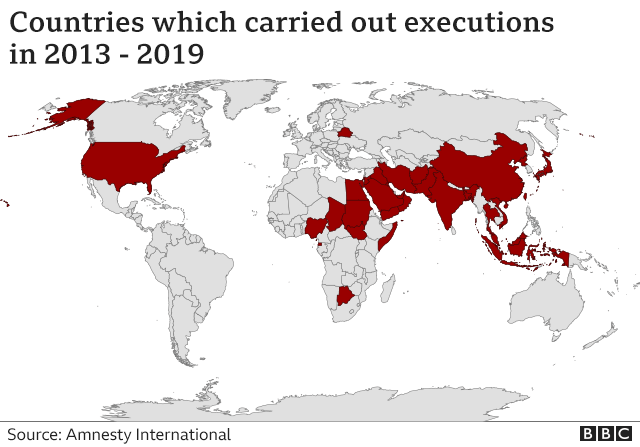 Wikipedia is a decent source of information about how capital punishment works in Japan but an even better site is here. First, unlike the U.S., Japan imposes the death penalty almost always for multiple murders, while in the U.S. it’s often imposed for murders of individuals—usually either children or those killed in a gruesome manner. (I have some confidence that Biden will stay all pending federal executions, but he has no power to stay executions of people convicted in state court.)

One difference, shown in the video below, is a big one: in the U.S. you are given an execution date, though it may be put off through legal appeals. But if those appeals fail, you know exactly the day on which you’ll die. In contrast, in Japan you never know when you’ll be executed until the morning of the execution.  You’re simply informed, given a last meal, and summarily hanged (see below). Unlike the U.S., there are no witnesses save government and prison officials, and the prisoner’s lawyers and family are not informed about the execution until it’s over.

To me, the Japanese method seems more cruel than that of the US. Imagine living day to day (and some prisoners have waited about 40 years, while the average is about six years) not knowing whether each day will be your last! To me, that would seem to impose a constant, torturous anxiety on a prisoner.  (As I’ve said, I oppose the death penalty altogether.) If you feel otherwise, and this is an important question to me, weigh in below.

Below is a video with a series of photos of what the condemned Japanese prisoner sees on his way to the noose. First we see the prison, and then the room where the condemned man is allowed to sit and speak with the prison chaplain. On the way to the hanging chamber, he passes a Buddhist icon. Then on to the noose. As an informative page on Japan’s death penalty (worth reading if you can stomach it) describes the process:

After a death row inmate is notified of his fate he is first taken to a prayer room with a Buddhist altar where the condemned is read his last rites, a senior prison official listens to his last words and the inmate is allowed to speak with a prison chaplain, usually a a Buddhist priest or Christian pastor. After leaving the prayer room the inmate walks down the corridor to an anterior chamber where the prison warden officially declare that the execution will be carried out. At the Tokyo facility a gold Buddhist statues stand opposite the room’s door. The anterior chamber is separated from the execution chamber by a bright blue curtains. On the side of the execution chamber is a viewing area, where the prison warden, prosecutors and other officials watch the execution.

There are, as the video below shows, three buttons, one of which controls the trapdoor. At a signal, three men press the buttons, so nobody knows who exactly caused the drop. This is similar to U.S. firing squads, in which one rifleman is given a gun with a blank in it, so each man can think that he didn’t shoot the prisoner.

It’s all a horrible business, and it’s more expensive, at least in the U.S., than a sentence of life without parole. Nor is capital punishment a deterrent.  As far as I’m concerned, the death penalty is simply the state itself committing the killing, and it accomplishes nothing that life without parole could accomplish. Killing someone is retributive punishment, pure and simple. And there’s one huge advantage of the no-execution policy: if a prisoner is later found to be innocent, they can be set free. (This happens surprisingly often.) That can’t occur if you’re dead.

Let’s take a poll, but I do want to hear people’s views in the comments.