The latest news is about as scant as I’ve seen since the pandemic began, and maybe that’s a good thing. The bad part is that nothing meaty is happening in the world of culture, with the usual instances of demonization, pushback, abject apologies, and the relentless spread of wokeness, which I now consider unstoppable for the next five years or so. But what do I know?  Today I’ll point you to several articles that you can read, and I’ll give my own take on them.

Here’s an article from the Vancouver Sun sent in by reader Michael called to my attention; click on the screenshot. 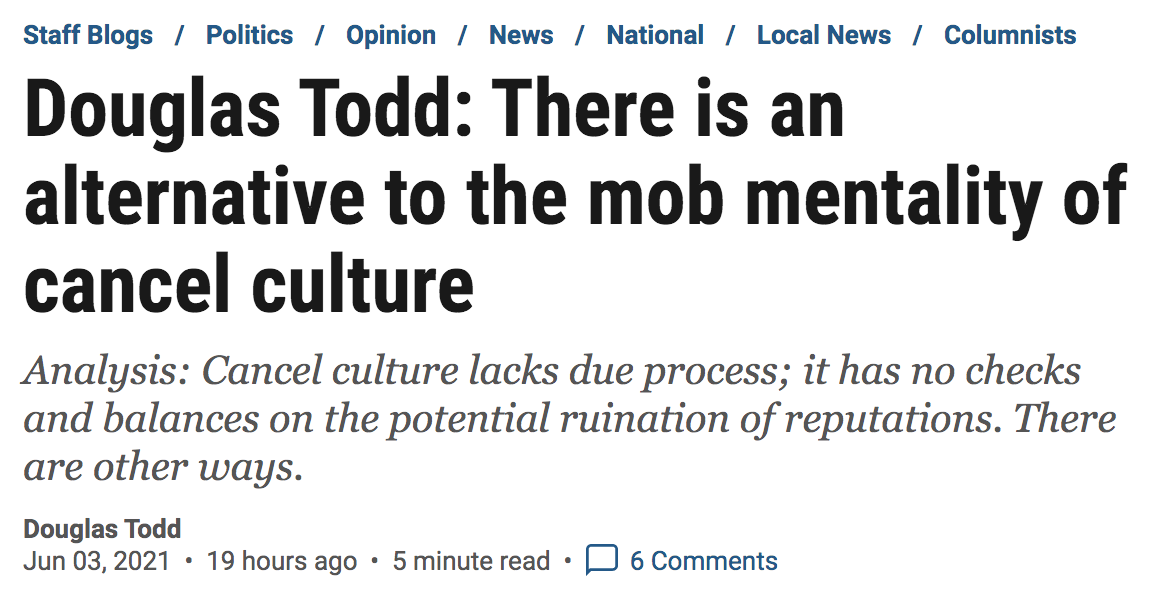 While many on the Left deny that there is a “cancel culture”, arguing that it’s just a fancy, right-wing monicker for the usual give-and-take of political discussion, I don’t think that’s the case. There are two things that are new with real “cancel culture” that distinguish it from regular debate about ideas:

a. The creation of taboos: ideas that one is forbidden to discuss, many of them involving observed group differences. Even mentioning these ideas or the data behind them can ruin one’s reputation. John McWhorter specializes in discussing this taboos with respect to race in America.

b. Which brings us to the second point. Instead of being seen as political/intellectual/moral discourse, much “cancel culture” discussion involves labeling people as “bad” and attempting to ruin their reputations. In other words, people’s characters become a topic more important as their views.

But cancel culture is spreading wider today. Social media has expanded the power of mass cancellation and de-platforming (stopping a person from contributing to a public forum). Polls suggest two of three North Americans believe social media is fostering more hatred and violence.

. . . But the disturbing problem with cancel culture is it is most often characterized by vigilantism and moral panic. It lacks due process; it has no checks and balances on the potential ruination of reputations.

I agree with the problem, but how does one enact “due process” for this “vigilantism and moral panic”? Todd has some solutions, but (see below), they seem seem lame.

More evidence (Todd adduces anecdotes like Rusdie’s fatwa and attacks on people like Bari Weiss and J. K. Rowling, but those folks are hardly “canceled”):

Eric Kaufmann is a political-science professor at University of London, Birkbeck, who was raised in Hong Kong and Vancouver. He recently led a groundbreaking study into scholars’ attitudes to free expression in Britain and North America. His poll findings reveal the air is definitely chilly.

“Less than 10 per cent of Canadian academics generally support campaigns to dismiss scholars who report controversial findings around race and gender,” Kaufmann found. “However, a large group, of around 30 per cent to 60 per cent, do not actively oppose cancellation. This mirrors American and British findings.”

Kaufmann, whose origins are Jewish, Hispanic and Chinese, also discovered that major academic departments are overwhelmingly made up of people who are left wing.

“Seventy-three per cent of Canadian social science and humanities academics sampled from the 40 top-ranked universities identify as left-wing, with just four per cent identifying as right-wing.” The few conservatives who remain report the climate is hostile, with many self-selecting away from academia.

Partly because of Kaufmann’s widely discussed report, the British government has brought in legislation to require universities to protect the free speech of staff, students and visiting speakers.

Well, these are polls of academic support and lack of support, and although the Left is more responsible than the Right for deplatformings and cancelations, the Right is by no means exculpated. But let’s assume, based on the long list of anecdotes, which are data in the plural, that there is a cancel culture. The list of firings and ostracism at the New York Times alone will tell you that something wonky is going on.

As for government mandates that universities must have free speech, we don’t need that in public schools or universities in the U.S., as it’s alreadythe law; but there’s no legal mandate that private schools allow free speech.  Such a mandate would violate the Constitution since such schools are not considered arms of the government and hence needn’t follow the First Amendment. But, as far as possible, I recommend that all universities follow the Chicago Principles, which, at our private university, uphold the precepts of the First Amendment. I see no reason why the adoption of these Principles can’t be nearly universal, though of course religious schools won’t cotton to them.

What I do oppose are legislatures’ attempt to mandate what is or is not to be taught, like Critical Race Theory. While I object to much of CRT, it’s the bailiwick of school boards, not state legislatures, to determine what subjects should and shouldn’t be taught.

Given that cancel culture is real, what cures does Todd prescribe. He has three:

1.) “Administrations could start by protecting the weakening tenure system, which provides senior professors with job security, says Gandesha, who has tenure. He is worried many faculty, especially adjuncts, self-censor to the extreme knowing they can be destroyed by a vendetta over a wayward remark.” [Simon Gandesha is a professor at Simon Fraser who teaches a course on cancel culture.]

Yes, there is self-censorship everywhere, but much of that has nothing to do with tenure. For untenured faculty, it’s true that there’s a danger they can be fired for free speech, but the adoption of the Chicago Principles would prevent that. That adoption is in fact Coyne’s Solution to cancel culture, at least in universities (see below).

2.) “As for the chaotic, vicious world of social media, Gandesha joins those who believe it’s time to treat giant internet companies like utilities, organizations that provide the public with electricity, gas or water. That means bringing in complex regulations — so that decisions about what can be shared online aren’t left to the mania of the crowd.”

This is dangerous, as those “complex regulations” will inevitably be so slippery that much of them will amount to censorship of ideas that some people don’t like. Is the Will of Zuckerberg really superior to The Mania of the Crowd?

3.) “And how hard, Gandesha asks, would it be to respond to polarization by having more public debates between people on the left and right — like the way, in 1973, that revolutionary Black Panther Huey P. Newton appeared on the show Firing Line with conservative commentator William F. Buckley.

It’s not impossible to do so today, although it’s rare. To their credit, University of Toronto psychologist Jordan Peterson, who has been subjected to boycott campaigns on some campuses, and Marxist philosopher Slavoj Žižek were able to model how to dialogue when they took part in a debate in 2019.”

Is there anybody who thinks that more public debates between political or ideological opponents will even begin to ameliorate cancel culture? First, many such debates will be shut down. Second, we’ve been having debates between evolutionists and creationists for a hundred years, and they haven’t brought people to the truth (i.e., evolution) or quelled the controversy, in which Americans who accept some form of creationism outnumber those accepting scientific evolution by more than three to one. Debates are exercises in rhetoric and forms of entertainment, but I don’t think they’re particularly good at changing minds.

So what is my solution? It’s twofold.

First, as many schools as possible should adopt the Chicago Principles of Free Expression, which means adhering to America’s First Amendment.

Second, PUSH BACK on what you don’t like. If you’re in a position to speak up without getting fired or killed, by all means oppose the madness publicly. I think this is the best way to help reduce the prevalance of cancel culture. After all, it worked to reduce the prevalence of religiosity! The more people come out against the madness, the more the silent people will feel empowered to join the chorus.