I’m running out of cat-related items, too, many of which are contributed by readers. If you see something interesting that’s cat-related and would intrigue the readers here, by all means send it to me.

This week’s Caturday Trifecta features a cat mascot from Japan who’s promulgating mask usage (remember, only 2% of Japanese have been inoculated, and hospitals are overwhelmed with COVID patients.  Japan loves both cats and mascots, and it’s only natural that a cat mascot would appear to help fight the virus. Click on the screenshot from Atlas Obscura below:

The cat’s name is Koronon, and here’s an excerpt:

A masked superhero patrols two of Tokyo’s busiest districts, on a mission to help Japanese citizens defeat the coronavirus. Its name is Koronon, and it’s a bulbous, bubblegum-pink cat.

The crusader is a mascot—a person in a plush costume—with a big X slashing through the phrase “COVID-19” on its belly. Throughout the day, it prowls busy Ikebukuro and Shinjuku, handing out masks. Koronon also serves as a visible reminder to practice social distancing and hand hygiene, the pandemic equivalent of Smokey Bear’s forest fire prevention efforts as a spokescritter in America’s woods. COVID-era central Tokyo isn’t quite as bustling as usual—bars and restaurants close early, and most events are canceled—but there are still plenty of people out and about, engaging with Koronon and its many peers.

Why are Koronon’s slogans in English, though?

While Koronon (whose name loosely translates to “no corona”), appears to be the only mascot created in response to the coronavirus in Japan, it isn’t alone in its fight against the pandemic. Throughout the country, mascots have been repurposed to educate the public on issues surrounding the virus.

Some mascots that typically do other things have been enlisted to pass out face masks. Others, including Nazo No Sakana, the mascot for the Chiba Lotte Marines’ baseball team, have starred in social media campaigns about proper hand-washing technique. Scores of them have been featured on signs reminding residents to practice social distancing, and illustrations of mascots appear behind human speakers at many press conferences; Carlier says their presence helps add levity to somber discussions.

The big goal, Hayashi says, is for Koronon to join the ranks of Olympic mascots. Two others, Miraitowa and Someity, are already slated to participate in the opening and closing ceremonies of this summer’s Olympic and Paralympic games, and various other ambassadors, including Sailor Moon and Astro Boy, have helped promote the events.

However, it’s not certain that the Olympics will really proceed in Japan this summer. Japanese health authorities consider it unwise, the U.S. has discouraged tourists from going to Japan, and several medical journals have called for a postponement of the Olympics. Now if only Koronon would have a coterie with him who would vaccinate his fans!

This happened in my town, but I heard about the news from the Guardian. Click on the screenshot to read about a brave kitty, who survived a leap, and to see a video of the jump: 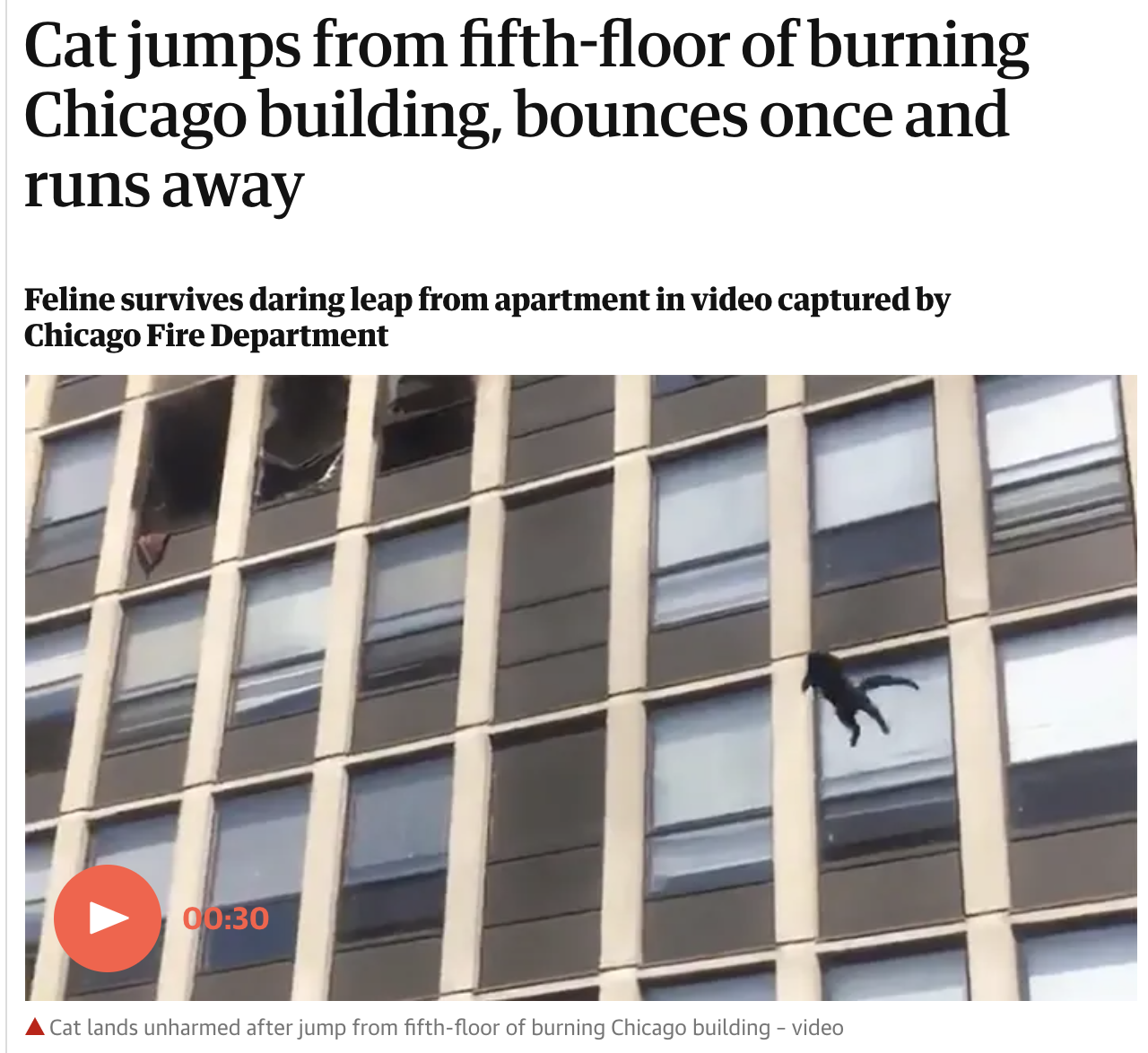 A Chicago cat has survived after jumping out of a fifth-floor window to escape an apartment fire.

Chicago Fire Department personnel were taking a video of the exterior of the building as firefighters were extinguishing the blaze when a black cat appeared through billowing smoke at a broken window. The feline briefly tested the side of the building with its front paws, and then jumped.

Onlookers gasped as the cat fell. But it missed a wall and instead landed on all four paws on a patch of grass, bounced once and ran away.

“It went under my car and hid until she felt better after a couple of minutes and came out and tried to scale the wall to get back in,” said fire department spokesman Larry Langford.

The cat was not injured, Langford said, adding he was trying to track down its owner.

No injuries were reported after the fire, which was confined to one apartment. The cause of the fire hasn’t been reported by officials, nor how much damage resulted.

Cats can fall considerable distances without injury, as recounted by an entire Wikipedia article on “high rise syndrome.” Decades ago I heard the rumor that cats falling from higher stories have a relatively smaller chance of being injured, but Wikipedia says there’s a controversy about that:

In a study performed in 1987 it was reported that cats who fall from less than six stories, and are still alive, have greater injuries than cats who fall from higher than six stories. It has been proposed that this might happen because cats reach terminal velocity after righting themselves (see below) at about five stories, and after this point they are no longer accelerating, which causes them to relax, leading to less severe injuries than in cats who have fallen from less than six stories. Another possible explanation for this phenomenon is survivorship bias, that cats who die in falls are less likely to be brought to a veterinarian than injured cats, and thus many of the cats killed in falls from higher buildings are not reported in studies of the subject.

In a more recent study, it was observed that cats falling from higher places suffered more severe injuries than those experiencing shorter drops.

WANE in Fort Wayne, Indiana, reports on a “Thick Camp” for moggies who need to lose a few pounds (click on screen shot).  To qualify, the cat has to weigh over 14 pounds, and the goal is more to get them used to timed feedings than to lose weight (there’s a short video):

A room at Humane Fort Wayne has been temporarily turned into a weight loss boot camp for cats called “Thick Camp.”

The camp offers a low fat diet and activities such as bird watching, high jumps and string play for cats 14 pounds or heavier. In a Facebook post, Humane Fort Wayne said the goal is not to get the cats skinny but to have the cats get used to timed feedings, moving around their environment and adding more activity to their routine.

“When free fed, or when provided a full bowl of food 24 hours a day, we see cats start to carry about 5-8 extra pounds of weight on their joints and organs. It can cause long-term and expensive health issues and most of this is avoidable by measuring portions and adding play to your cats’ day,” the post said.

Humane Fort Wayne currently has a livestream of the thick cats which can be viewed on its YouTube page.

Sadly, that livestream no longer exists, perhaps because it was engaged in “fat shaming” cats.  Here’s a shot of the exercise room: 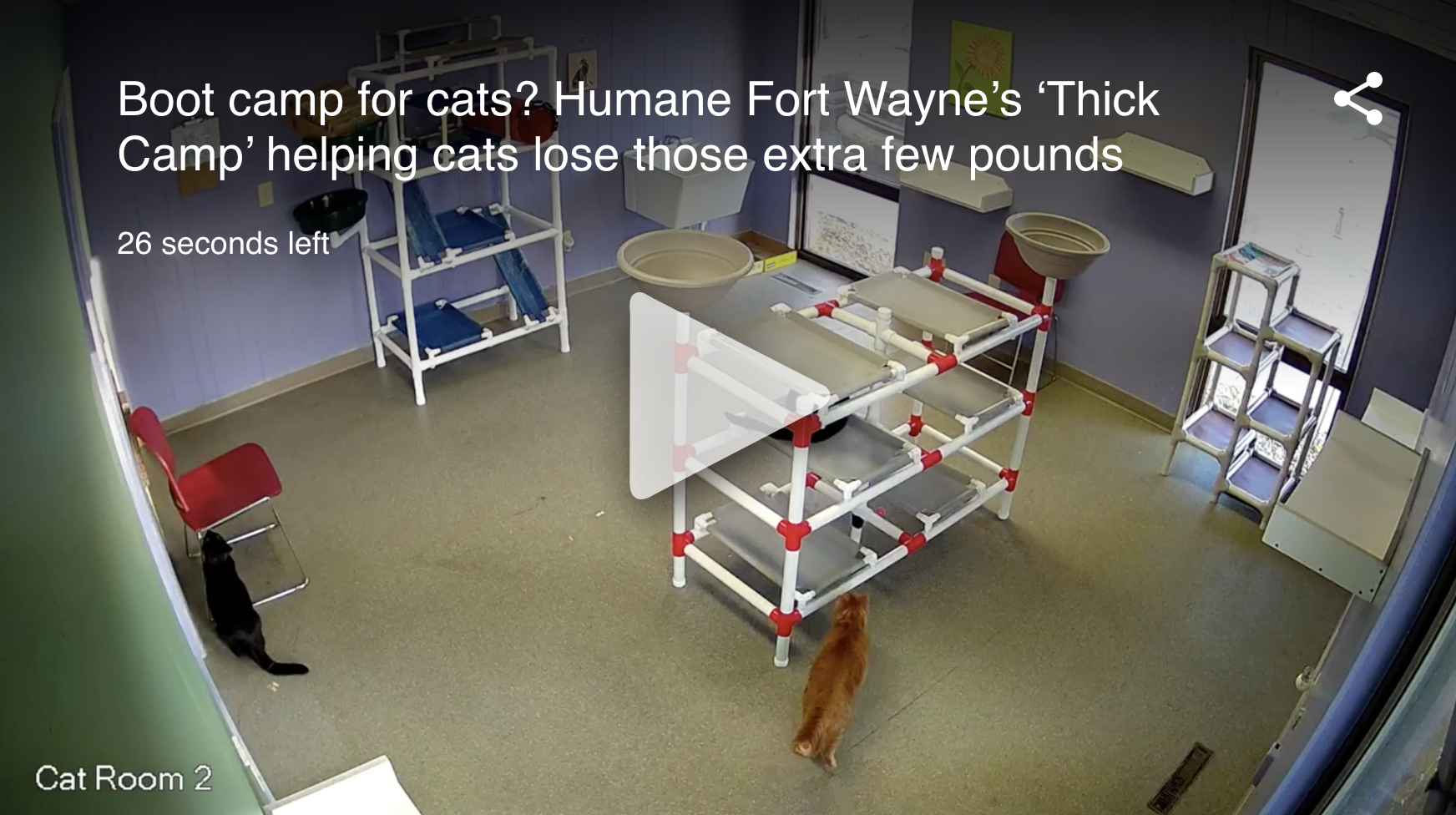 Lagniappe: Cat likes to play fetch, but his game is severely impeded by SHOES. But notice that the same size is only 1!