The only people who claim that behavioral variation among people has nothing to do with their genes are ideologues: “pure blank slaters.” Based on studies of other species, we know that virtually all studies of traits that vary among individuals—be those traits morphological, physiological, or behavioral—show that some or even a lot of the variation in a population is based on variation in the genes of different individuals. (I know of only three studies in animals, out of thousands done, that failed to find a genetic basis for variation among analyzed traits.  Two of the three studies were mine, and all were on directional asymmetry: trying to see if there’s a genetic difference for, say, having more bristles on the right than on the left side of a fly.)

While humans have an extra source of inter-individual variation—culture—there are ways to get around cultural inheritance to see how much of human variation is based on genetic variation. There are several ways to determine and measure the contribution of genetic variation to variation among individuals.

First, though, let’s learn the technical term at issue: heritability. Heritability is a measure that ranges from zero to one (or 0% to 100%), and tells you how much of the observed variation among individuals in a population is based on genetic variation among those individuals.  The higher the heritability, the more genetic determination there is of variation in the trait. So, for example, if the heritability of human height for females is 0.7 (or 70%), that means that if you measure the variation in a population for height of women (the variation is conventionally estimated by calculating the variance—denoted by σ² or s²—then of the total variance for height, 70% of that estimate is due to variation of individual’s genes. In this case, there’s a high degree of genetic control of variation in height. (This is close to the actual figure for female height.) Confusingly, the symbol for heritability is h².

Now it’s a bit more complicated than this, for heritability incorporates only what we call the additive genetic variance rather than other kinds of genetic variance (usually minor). And course, there are other obvious sources of variation in height—most prominently nutrition and health.  The more that environment contributes to differences among individuals in a trait, the lower the genetic heritability. So, for example, the heritability of hair color among adults has been reduced by the introduction of an environmental source of variation: hair dyes. Less of the variation in hair color that we see, compared to, say, 200 years ago, is due to genetic variation.

It’s important to grasp several caveats about heritability. First, it is a figure that applies to one interbreeding population at one time—the time of measurement. You cannot apply heritability in one group to a different group that may have different genes and, importantly, different amounts and sources of environmental variation that affect a trait. A population undergoing famine, for example, may show a lower heritability of height because individuals’ heights may be altered by grossly different amounts of food they get.

Second, heritability says very little about how much a trait can be changed, for genetics isn’t destiny. Yes, the heritability of height may be 70%, but that doesn’t mean that we can’t make people bigger or smaller by feeding them a lot of good food, injecting them with growth hormones, or starving them. When people object to measuring heritability of IQ, for instance, they often mistakenly think that because IQ has a sizable heritability, which it does, it therefore can’t be changed. But that’s bogus; there are many possible interventions that can affect IQ.

Third, as implied above, measuring heritability within a group tells us very little, if anything, about the genetic basis of difference among groups. That’s because there may be environmental differences between groups that affect the character in profound ways and make extrapolations from one group to another useless. You cannot conclude, for example, that measures of behavior, mentation, and so on, in one population or ethnic group, even if the heritabilities are large within that one population, must therefore mean that big differences between groups must rest on genetic differences between those groups. The heritability of height in the Japanese population right after WWII, for example, was probably considerably smaller than 70% because of wide variation of nutrition in the Japanese. Thus you can’t conclude that their smaller height than Americans at the time was based on genetic differences. In fact, the average height of Japanese people went up three to four inches in about thirty years! So much for the idea that a substantial heritability for a trait in one group means that that trait can’t be changed!

Fourth, there’s a common misconception that heritability tells you “how much of your height (or weight, or IQ) is genetic”.  A heritability of 80% for height doesn’t mean that, if you’re five feet tall, four feet comes from genes and one foot from the environment. That conclusion is biologically meaningless since the height of an individual involves an interaction between genes and environment. The only sensible way to construe heritability is to say that it tells us how much of the VARIATION we see from individual to individual within a population is based on differences in their genes (or rather, forms of their genes: different “alleles”).

Artificial selection isn’t practiced in humans, of course, so we usually determine heritability by looking at the correlation between relatives, including parent-offspring correlation and the correlation between twins. Parent-offspring correlation is dicey if there’s an environmental component to the trait that can also be inherited. I seem to remember that the two traits with the highest heritability in humans are religion and wealth, and that’s due to the passing on of these traits among generations via culture, not via genes!  In animals that have no transmissible culture, like fruit flies, one can, however, do these kinds of studies.

Humans researchers often use twin studies, comparing the similarity between identical twins (which have the same genes) with the similarity between fraternal twins, which share half their genes. We all know that identical twins are more similar for virtually every behavioral and morphological trait than are fraternal twins (just look at them!), implying that genes play a big role in these traits. You can in fact estimate the heritability of traits by looking at the difference in the correlations of identical vs. fraternal twins (you need a decent-sized sample of twins to do this).

One way around the possible environmental similarity is to compare fraternal twins raised together with identical twins separated at birth and raised apart. If the latter still show appreciably greater similarities despite their different environments, that’s a sure sign that the traits measured have substantial heritabilities. However, as you can imagine, there aren’t big samples of identical twins separated at birth.

Finally, we can measure heritabilities using DNA, by “genome-wide association studies”. This is more complicated, but involves finding those regions of the DNA associated with variation in a trait (like height), and then adding up the small effects of all known regions to see how much these known bits of the genome can contribute to variation among individuals. Heritabilities measured in this way are invariably smaller than those measured by correlations or selection, as the latter two methods take into account every region of the genome contributing to variation. Variation in most behavioral traits is due to many genes of very small effect, and it’s nearly impossible to find them all by association mapping.

This is all a very long prologue to a very short figure I’m going to show you—a figure that comes from this new paper in Nature Human Behavior. It summarizes heritability data for a number of behavioral traits, comparing heritabilities from twin studies to those from association studies. Click on the screenshot to see the paper, and I’ve put the full reference at the bottom:

And here’s Figure 2 showing the heritabilities measured both ways. Blue lines and dots give data from twin or family studies, orange lines and dots from association mapping.  You can see that association studies produce, as expected, lower estimates of heritability, but I’d expect the true values to be closer to the family-study data). 26 behavioral traits were measured, ranging from educational attainment, IQ as children and adults, amount of drinking and smoking, neuroticism, to mental disorders like schizophrenia.

The values in the colored triangle to the left are the “genetic correlations” between traits, which tells us the degree to which pairs of traits are affected by variation in the same genes. We need not concern ourselves with that.

For the moment, look at the lengths of the blue bars to the right, which are probably pretty close to accurate estimates of heritabilities. And for most traits they are pretty big, with over 25% of the variation in a trait due to variation in the genes within that population. For some traits, like adult IQ, number of sexual partners, alcohol dependence, autism spectrum placement, and schizophrenia, heritabilities are over 50%

What all this does is refute the “blank slate” view that the differences between people in their behavior is completely due to culture and socialization. It also shows that a substantial portion, however, is due to other sources of variation: developmental, post-birth environmental differences, and so on.  It also shows that you could select on any of these traits and get a response, increasing, for instance, the age of first intercourse (Christians take note!) or reducing alcohol dependence. NOTE: I AM NOT SUGGESTING THAT WE SELECT ON THESE TRAITS! 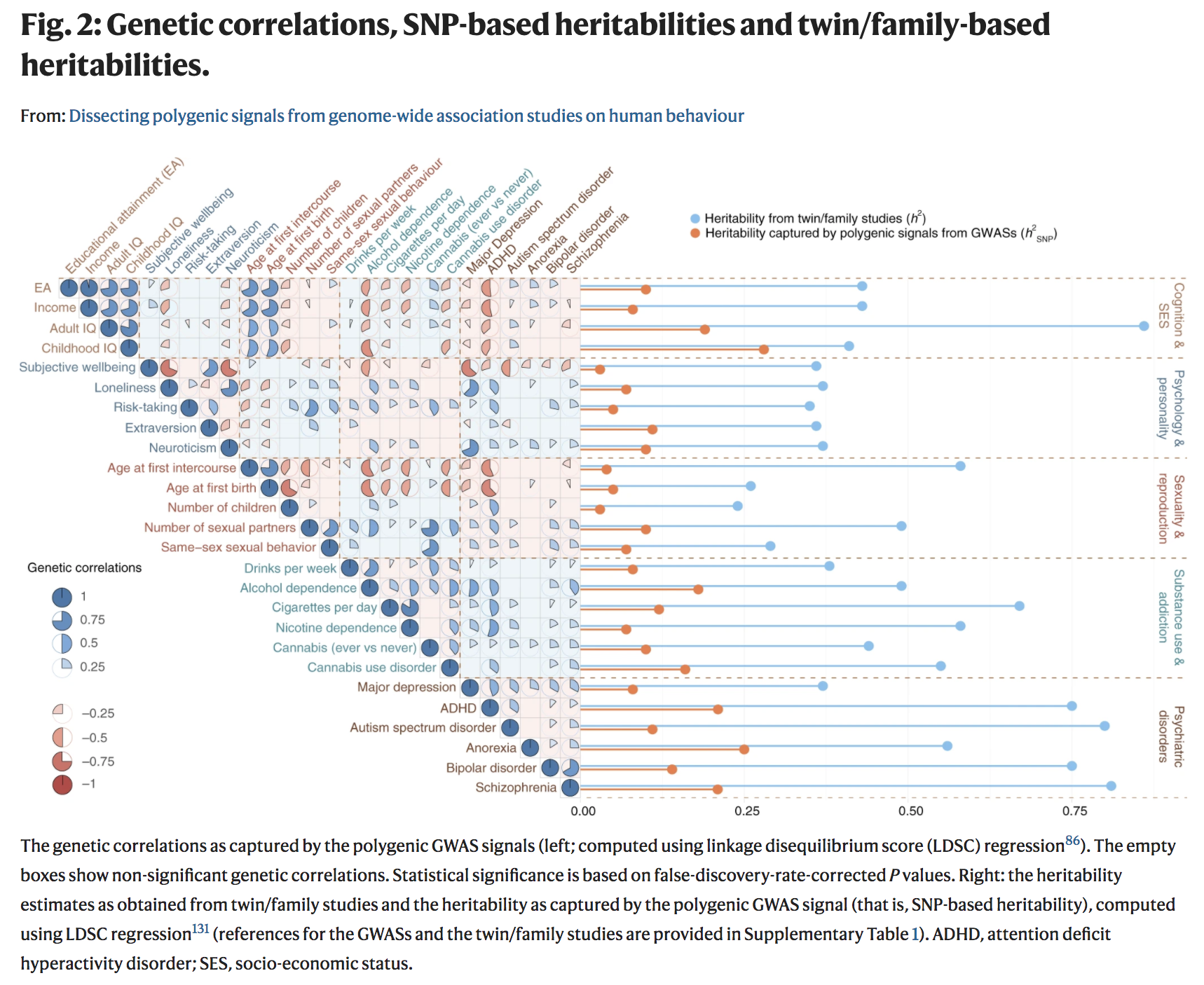