Today’s photos come from reader Richard Bond, and the set is called “Tree Roots.” Richard’s captions are indented, and you can enlarge his photos by clicking on them.

Two years ago I was on a guided tour in Cambodia. Inevitably the tour concentrated on temples and museums. After three days in the Angkor Wat complex, I was suffering from temple overdose and I started to take a broader interest in the sites, which were previously overrun with forest that had been only partially cleared.

The first thing to catch my eye was a lone tree (photo #1); from where its greenery remained, I assume that it was an example of a tree that normally forms the forest canopy. 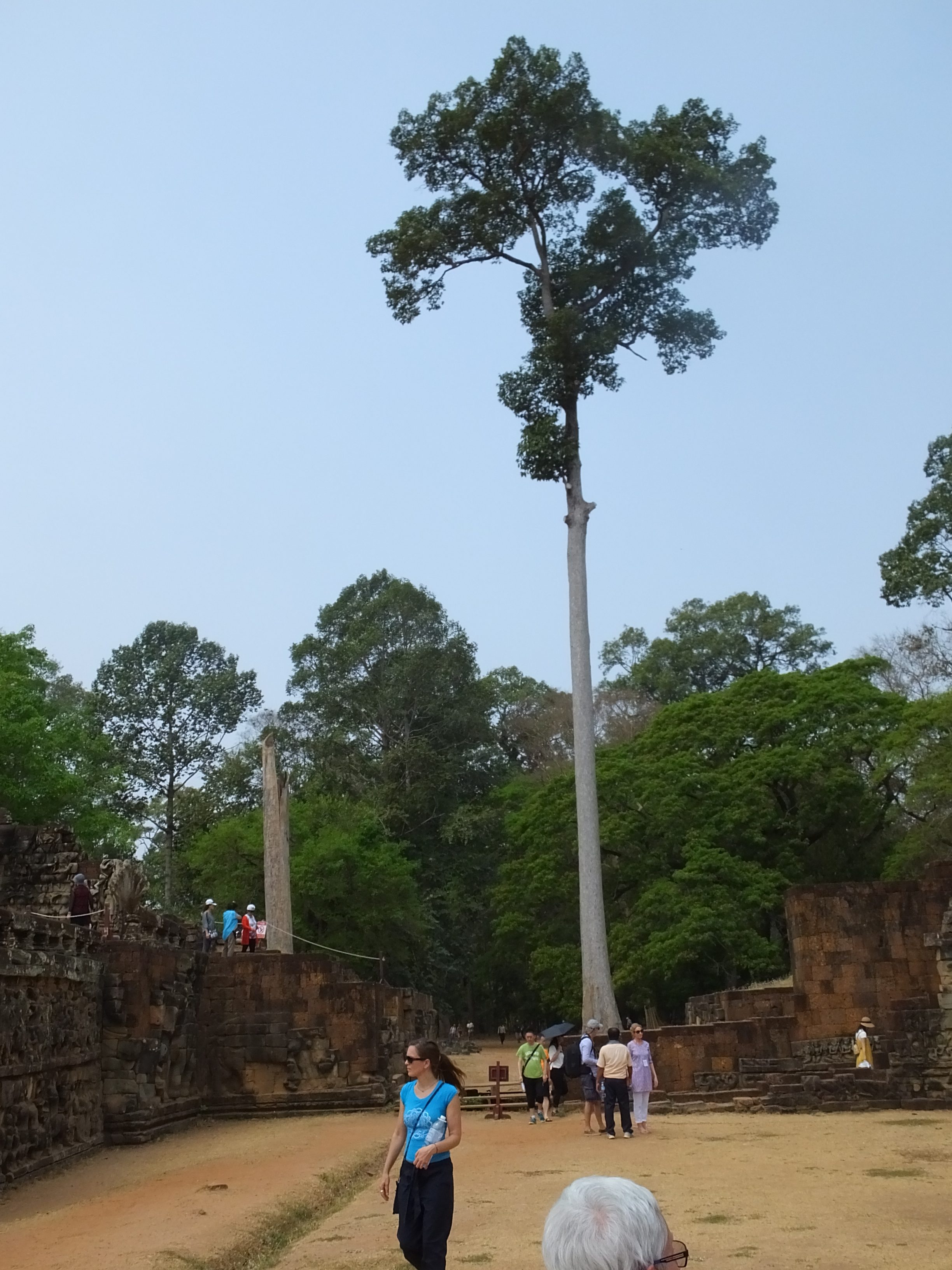 The second photo shows a termite nest using a ruined temple (not part of Angkor Wat) as a foundation. 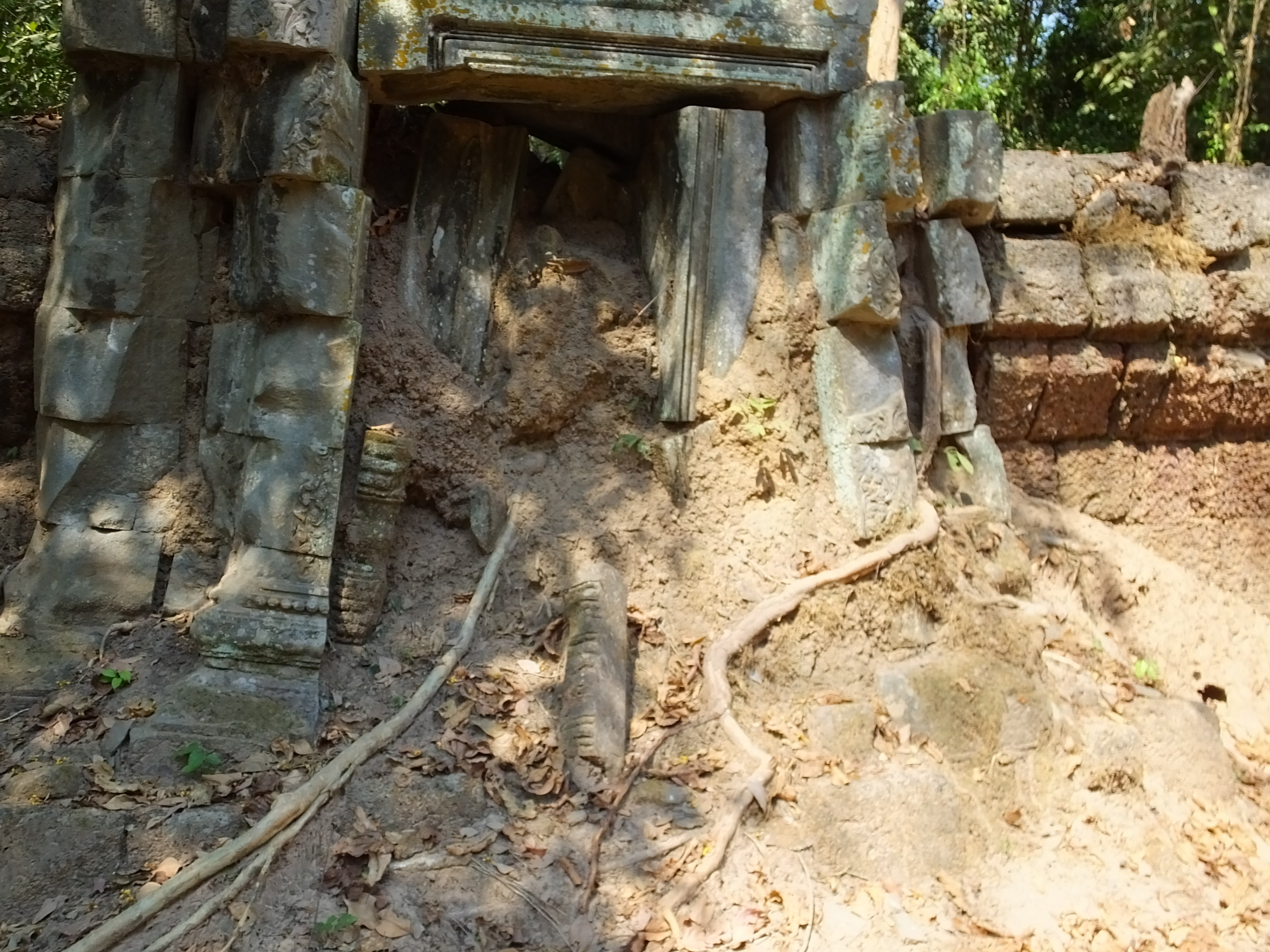 The next seven photos show what really piqued my interest, at the Ta Prohm temple: trees self-seeded on top of the buildings have spectacular roots that are finding their way to ground level. On checking the spelling of this temple, I was initially discouraged to find that the internet is hoachin’ with such photos, but I suppose that that is true of many of your readers’ subjects. However, some of my photos include people, giving an idea of scale. I was unable to identify the tree species at the time, but the Wikipedia entry on Ta Prohm gives some guidance. 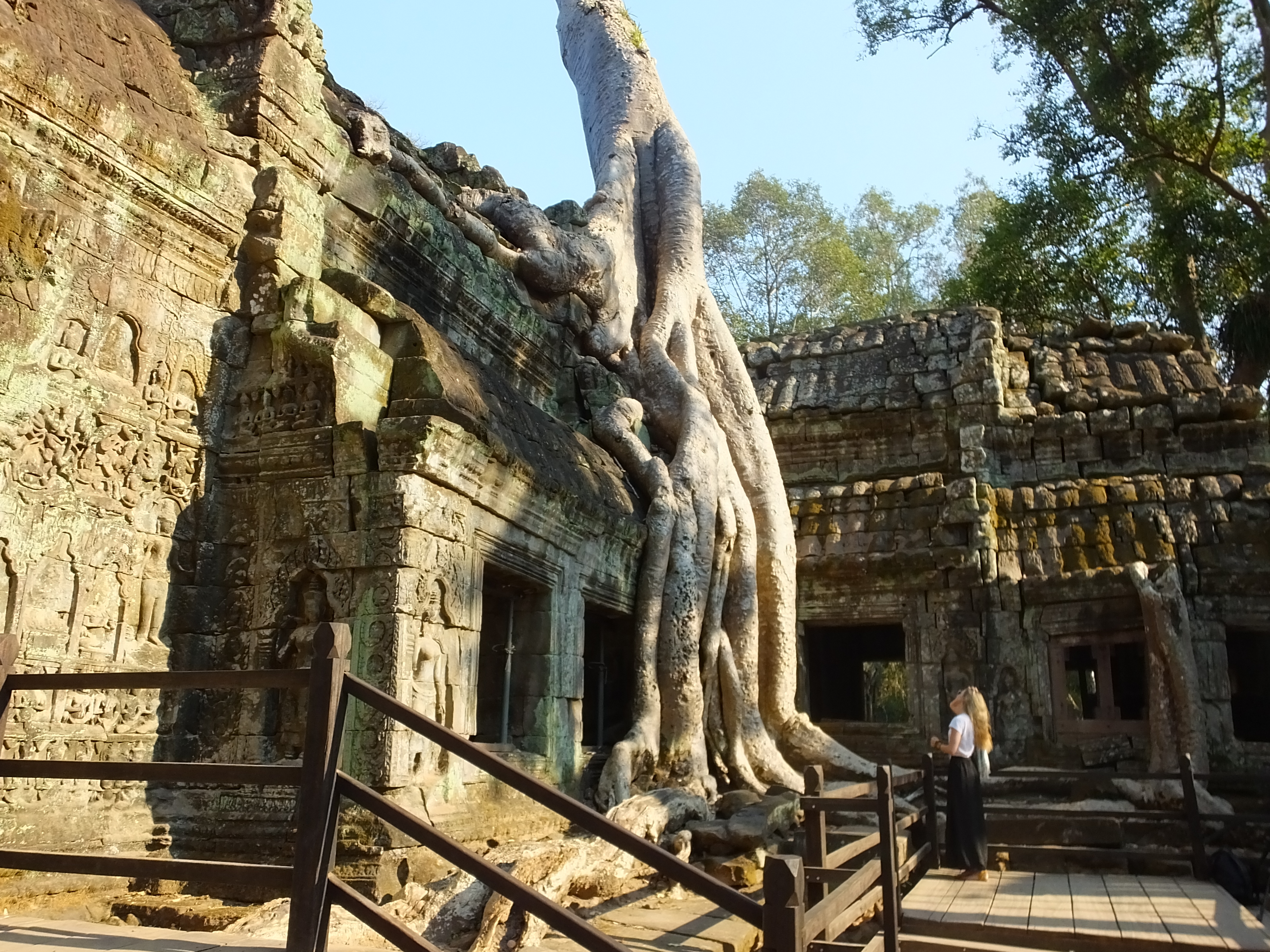 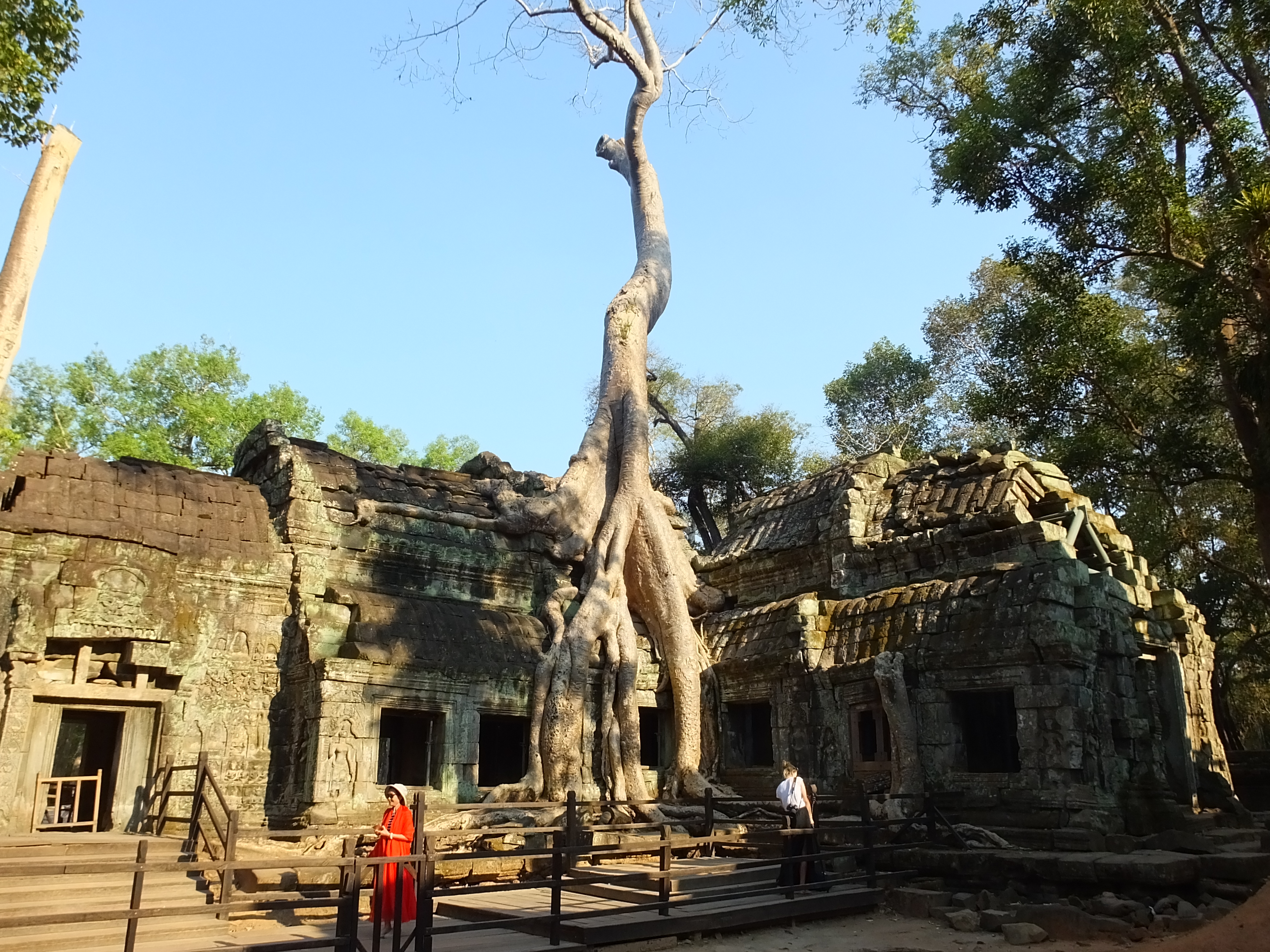 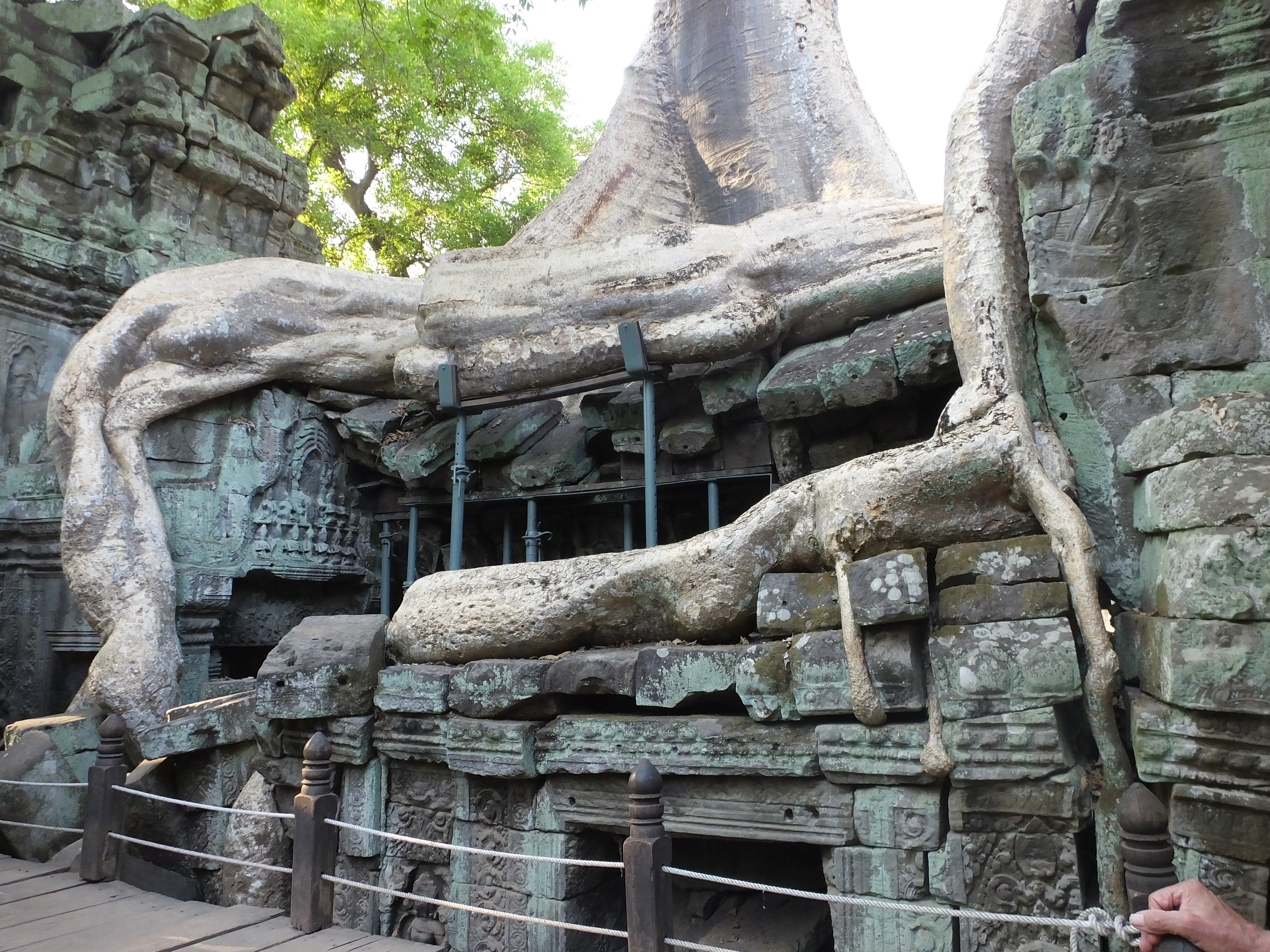 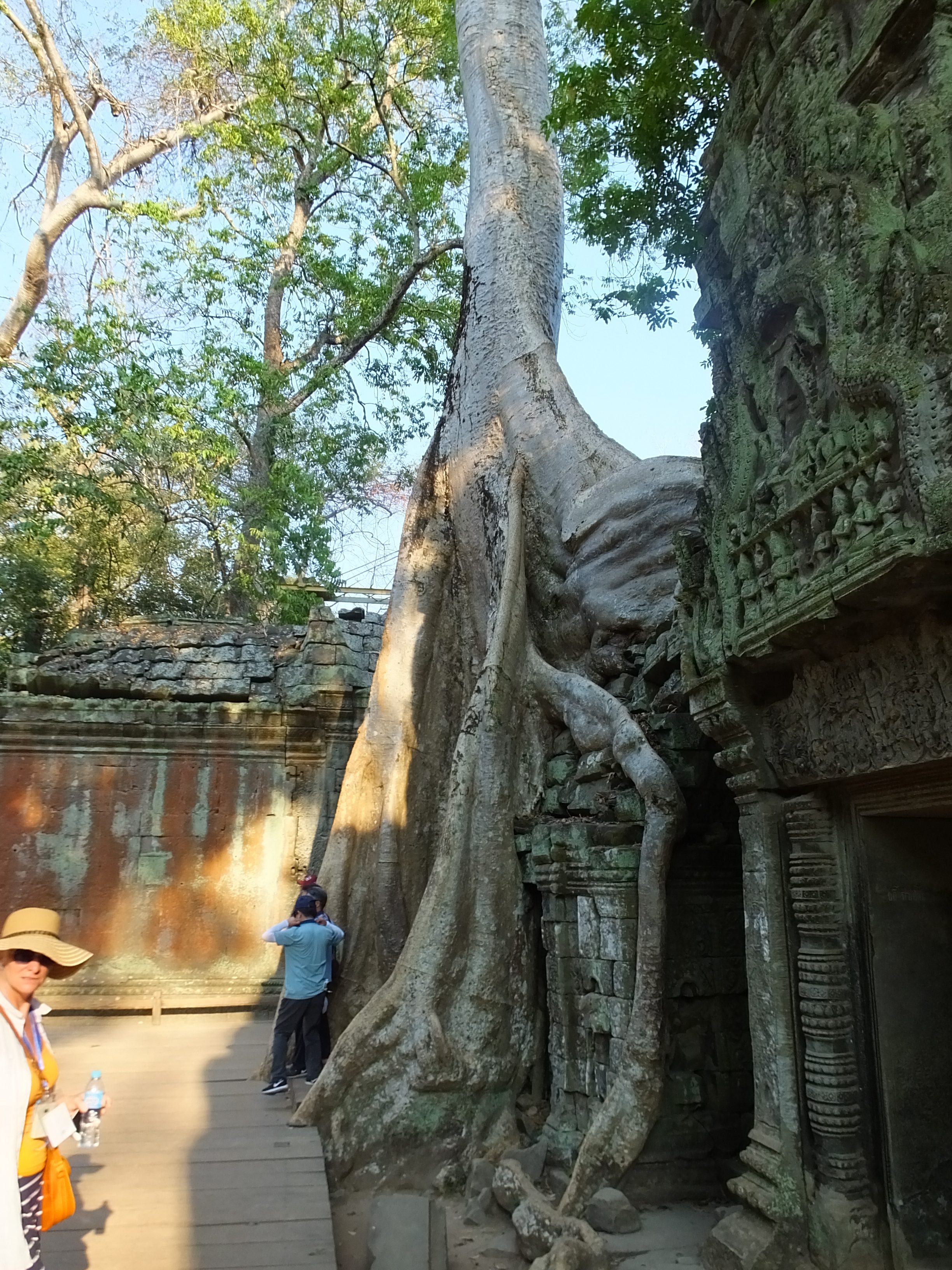 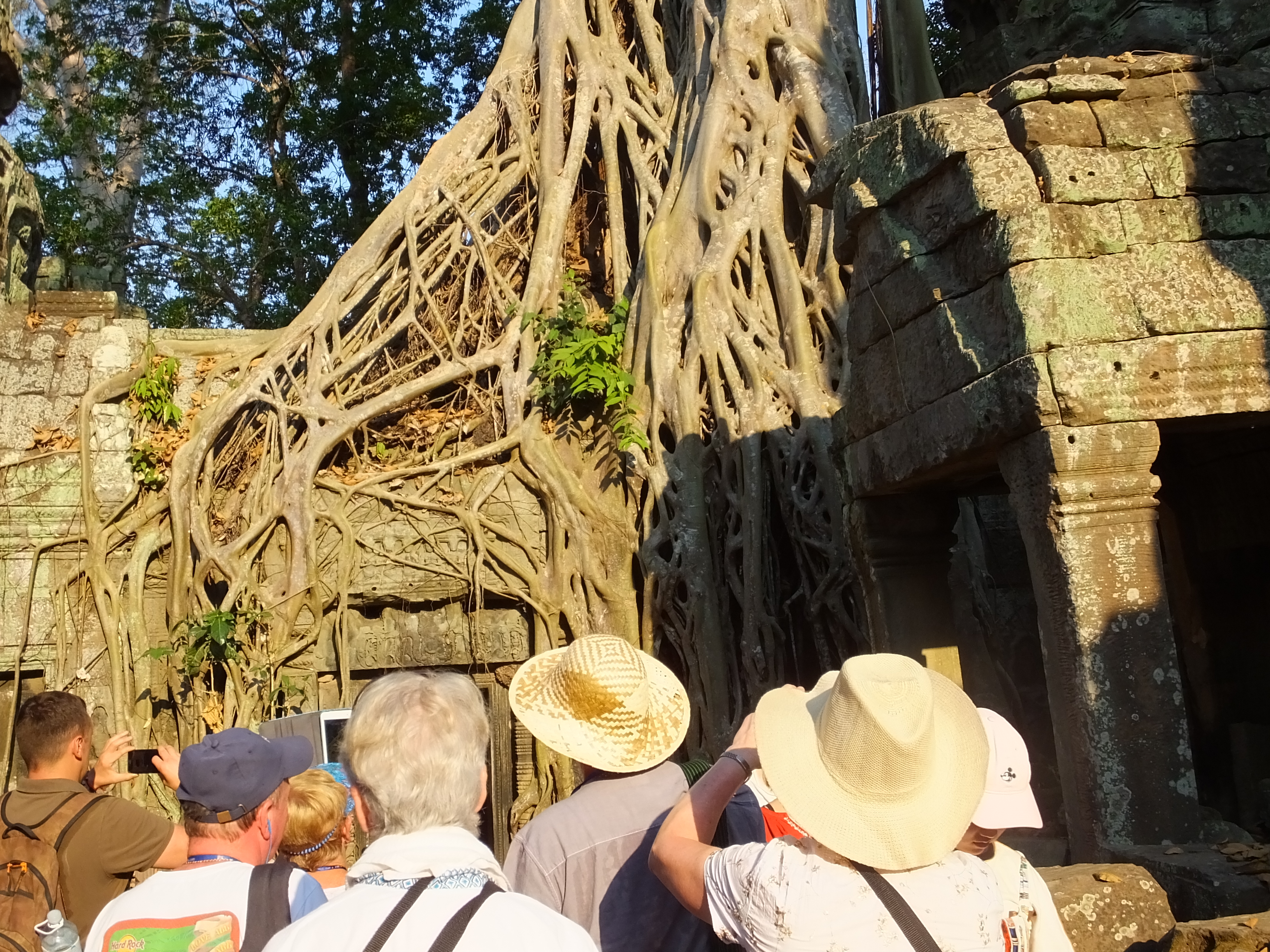 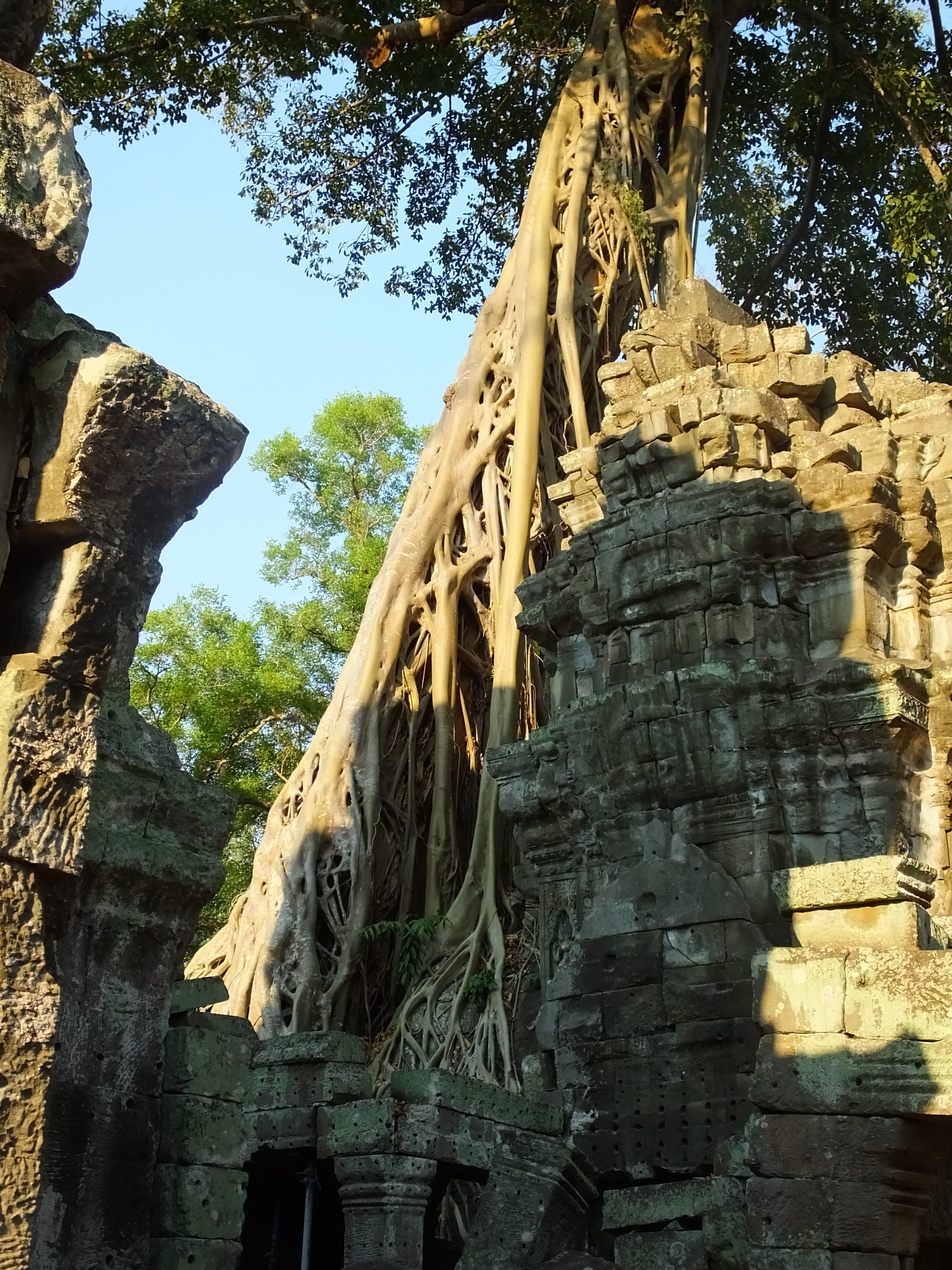 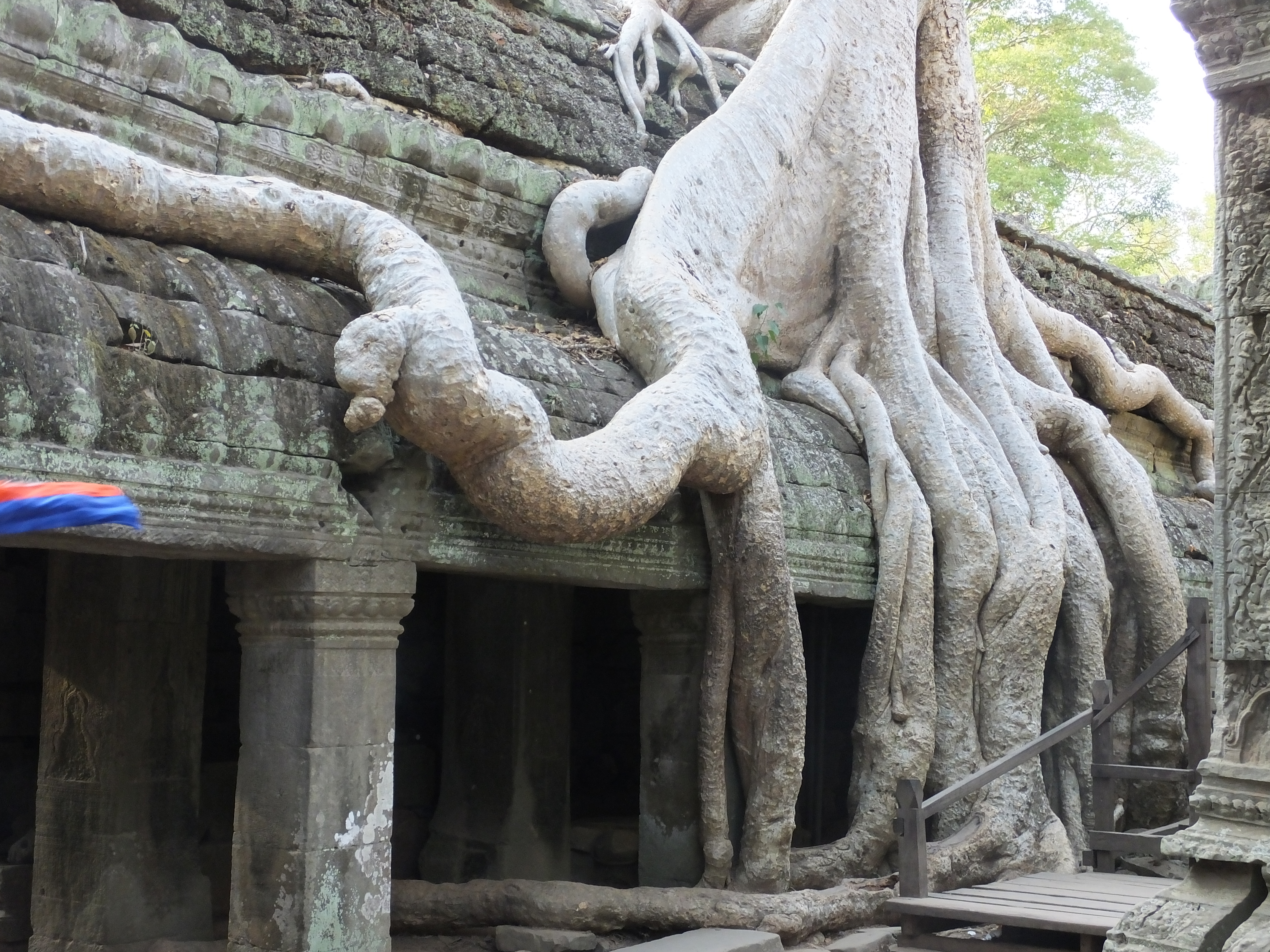 In any case there is a sting in the tail. Ta Prohm is infamous for a carving that creationists claim is a stegosaurus, “proving” that dinosaurs lived with human beings, There are several things wrong with that (see next to last photo): the “plates” are the wrong shape, and in only a single row; the head is far too large and on too short a neck; the relative proportion of the legs is wrong; and there is no sign of the thagomizer. The clincher, if any were needed, comes from viewing the carving obliquely. 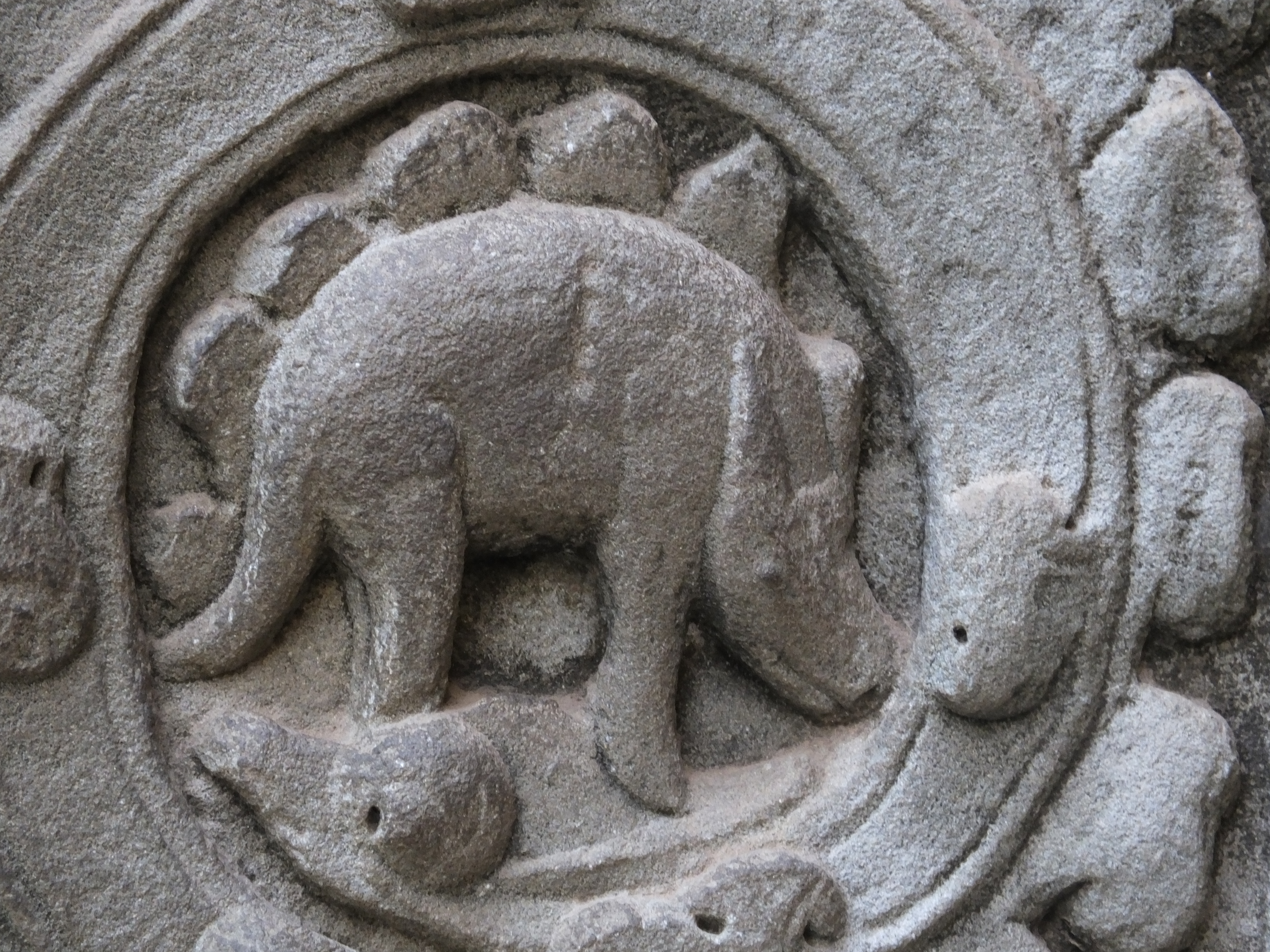 The last photo (which could have used more depth of focus) clearly shows that the “plates” are not in the same plane as the centre of the creature, as defined by its tail. Almost certainly, the carving is of a small animal against the background of a flower. Some sort of chameleon has been suggested. This idea is supported by what appears to be the weathered remains of a neck frill, which is much more easily seen when one is actually there, as opposed to in a photo. 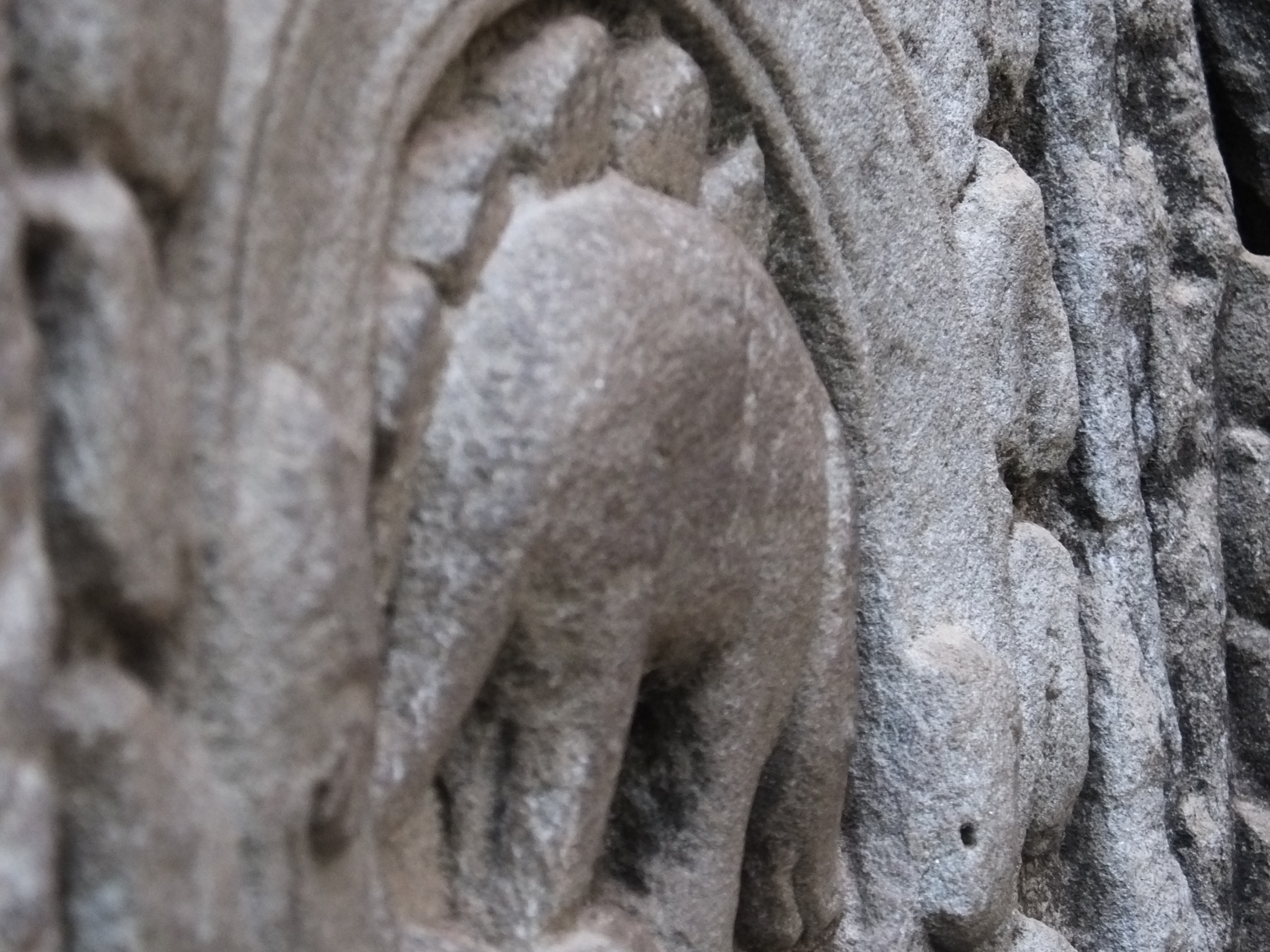