Today’s Jesus and Mo strip, “lambasted”, came with an email full of information:

It was Ian Paisley from Northern Ireland’s DUP who inspired this strip with his angry outburst against the BBC  [JAC: This is the son of Ian Paisley père, the bad man who died seven years ago.]

Here’s a bit of the BBC article:

THE BBC has been accused of “taking the mickey” out of the newly elected leader of the DUP [Democratic Unionist Party] over his religious beliefs.

Ian Paisley, the party’s MP for North Antrim, said the broadcaster had “lambasted” Edwin Poots because he is “a man of faith”.

He made the claims during the BBC’s Newsnight programme on Friday.

However, a spokesperson for the BBC denied this was the case.

During the introduction to the programme, Mr Poots was described as “a creationist from the party’s Free Presbyterian roots, who once banned donations of blood from gay men”.

“I would say absolute cobblers to your programme so far,” Mr Paisley told presenter Faisal Islam.“I’m reminded of the Frank Skinner line, you can be anything in Britain today except a Christian.”

“The BBC want to lambast the man because he happens to be a man of faith and they want to take the mickey out of his religion, you wouldn’t do that if he was a Muslim…

Well, I’ve always said that the term “a person of faith” should be taken as insult rather than praise, but if you want to talk specifics, banning donations of blood from gay men (blood can be screened) is bigoted, and accepting creationism is simply ignorance. So yes, Poots can be lambasted not because he’s a Christian, but because he has bizarre Christian beliefs.

The email from the Jesus and Mo author continues:

In other news, Richard Dawkins’ latest collection of writings “Books do Furnish a Life” contains the foreword which he wrote in 2013 for the 6th vol of Jesus & Mo strips “Folie à Dieu”.

We’ve started posting the strips on Patreon now, as this mailing list is becoming a bit unreliable. If you enjoy the comic and would like to help it keep going, and get early notifications when it is updated, all it takes is a dollar a month:’

Do subscribe; Jesus & Mo at a dollar a month is a great bargain (you can, if you wish, pay more). Here’s the strip: 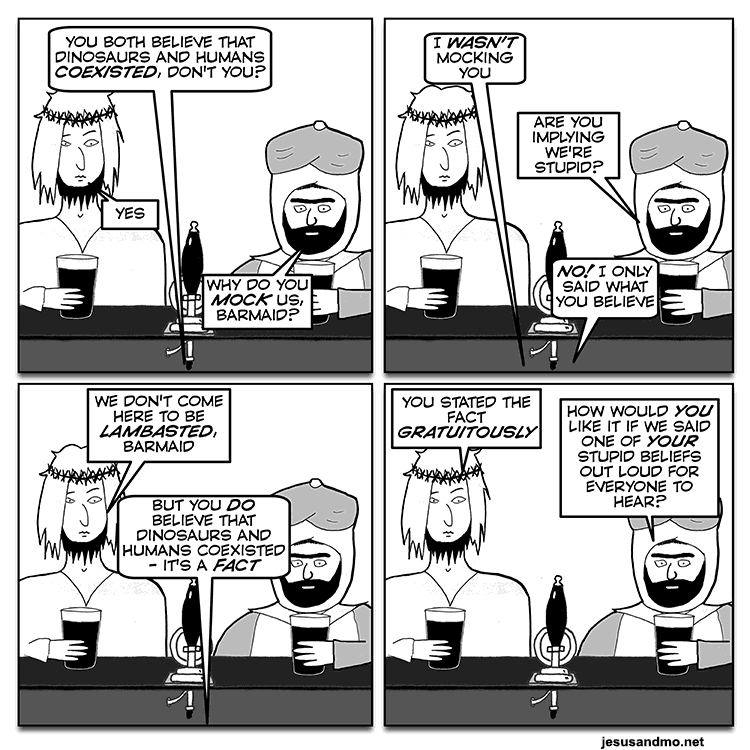