As I expected but hoped wouldn’t happen, the Biden administration is turning from a pro-Israel to a more pro-Palestinian stance, as described in this article in the Washington Post (click on screenshot): 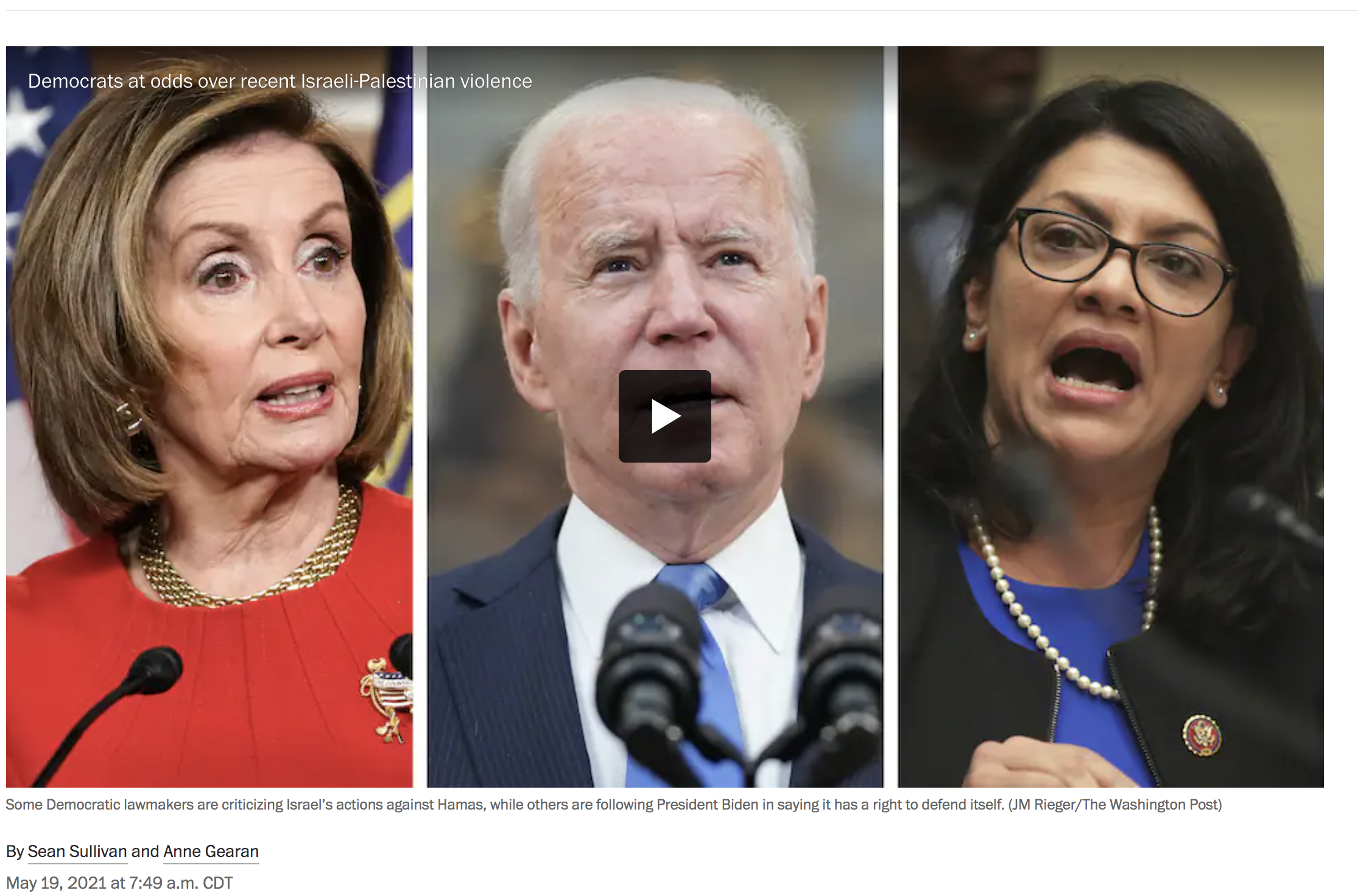 This is my personal view of the situation, and I’m quite depressed about it. Not only about the deaths, rockets, and now an internecine war in Israel in which neighbor attacks neighbor, but also about the fact that, to me, the Democrats are falling for the tenet of Critical Race Theory that the world is divided into the oppressor and the oppressed, and Jews are in the former class while Palestinians are in the latter. And this despite both groups could be considered “people of color” and in fact many have very similar ancestry.

I will tender some tentative thoughts, and remember they are tentative, but this is what’s going through my mind at the moment. Feel free to agree, disagree, embroider, add your own thoughts, and so on .

a.) The swing of the Biden administration is merely one symptom of a rise in anti-Semitism in general, though I don’t think for a minute that Biden is an anti-Semite. Many Democrats are not ill disposed towards Jews or Israel. But I will add that I think that people like Rashida Tlaib, Alexandria Ocasio-Cortez, and Ilhan Omar are anti-Semitic, sharing the same aims as Hamas: the elimination of the state of Israel. These Democrats with loud megaphones are clearly influencing the actions of the Biden administration.

b.) Along with this, I worry about a burgeoning anti-Semitism in the West. This is instantiated by the large number of demonstrations against Israel and very few against Palestine.  We already know that anti-Semitism is on the rise in the West, but to see it infecting my own political party upsets me.

c.) For the life of me, I cannot see much that Israel has done wrong in this whole conflagration. Even Netanyahu, regardless of what you think of him, prohibited a Jerusalem March this year because he thought it might incite violence. He didn’t have to do that, for the march proceeds every year. The invasion of the Al-Aqsa Mosque by the IDF seems justifiable since it was housing fireworks, rocks, and Molotov cocktails that Arabs were hurling on the Jews praying at the Western Wall. below. (Remember the mob of Israeli Jews who shouted “death to Arabs”—a reprehensible act—was dispersed and arrested by the Israeli Police.)

d.) Then there are the rockets that Hamas launches indiscriminately at Israel to kill civilians and wreak terror. Had they not done that, there would be no attempts by Israel to stop the launch of future rockets by destroying Hamas’s military capabilities. Can you think of any unilateral attack by Israel on Gaza without a prior provocation from Hamas’s rockets or other weapons?

e.) There are many reports of the new “hard line” that Biden is taken with Netanyahu. And yes, I believe pressure needs to be applied—but to both sides, with a stipulation that if Hamas stops the rockets, Israel will stop its self defense. Do we have any reports that Biden has taken a hard line with Mahmoud Abbas? (Granted, he doesn’t have much power in Gaza, but he’s still the President of Palestine and head of the PLO.) I haven’t seen any news reports that Biden has talked to Abbas.

f.) The most frequent charge leveled at Israel is the “disproportionality” charge: more Palestinians have died in the fighting that have Israelis. (I have to add, cynically, that if the situation were reversed, I don’t think the world would care much.) But the disparity is clearly not because Israel is deliberately targeting civilians. Far from it—it would be the worst thing Israel could to to go after civilian targets, particularly women and children. Now it’s well known that Hamas uses human shields, fully cognizant that it will lead to more deaths of civilians, including women and children, and that their own malfunctioning bombs, fired from civilian areas)  have killed a fair number of their own people. I believe that sacrificing part of their civilian populations is in fact an important part of their public-relations strategy. Nothing shows this more clearly, I think, than this conversation between an Arab-speaking IDF member trying to warn someone in Gaza of an imminent attack (yellow text), with the latter person (white text) choosing death for children. “If the children need to die then they’ll die”.

But given that Israel’s aim is to destroy Hamas’s capability of attacking and terrorizing the Israeli populace, what are they to do? Stop going after Hamas? Take down the Iron Dome so the playing field gets more “level”? Remember, Israel always warns civilian occupants of buildings that they want to attack, and those buildings house facilities involved in promoting terrorism against Israelis. Such was the case for the building housing the Associated Press and Al-Jazeera.

As always, I favor a two-state soution, but have come to realize that that solution is largely unpalatable to those Palestinians, and there are many, who want the complete eradication of the nation of Israel.

So yes, call for a cease-fire, but the first stipulation must be that Hamas stop firing rockets into Israel.

Your turn. Have your say. I’m not going to argue with anyone, as this is just a brief series of thoughts, but other people might argue. Please be civil: this topic is a fraught one. Thanks!