We have three articles today on the tendency of cats to sit not just in boxes, but in squares. Click on the screenshots to read. All three popular articles come from the same scientific one: 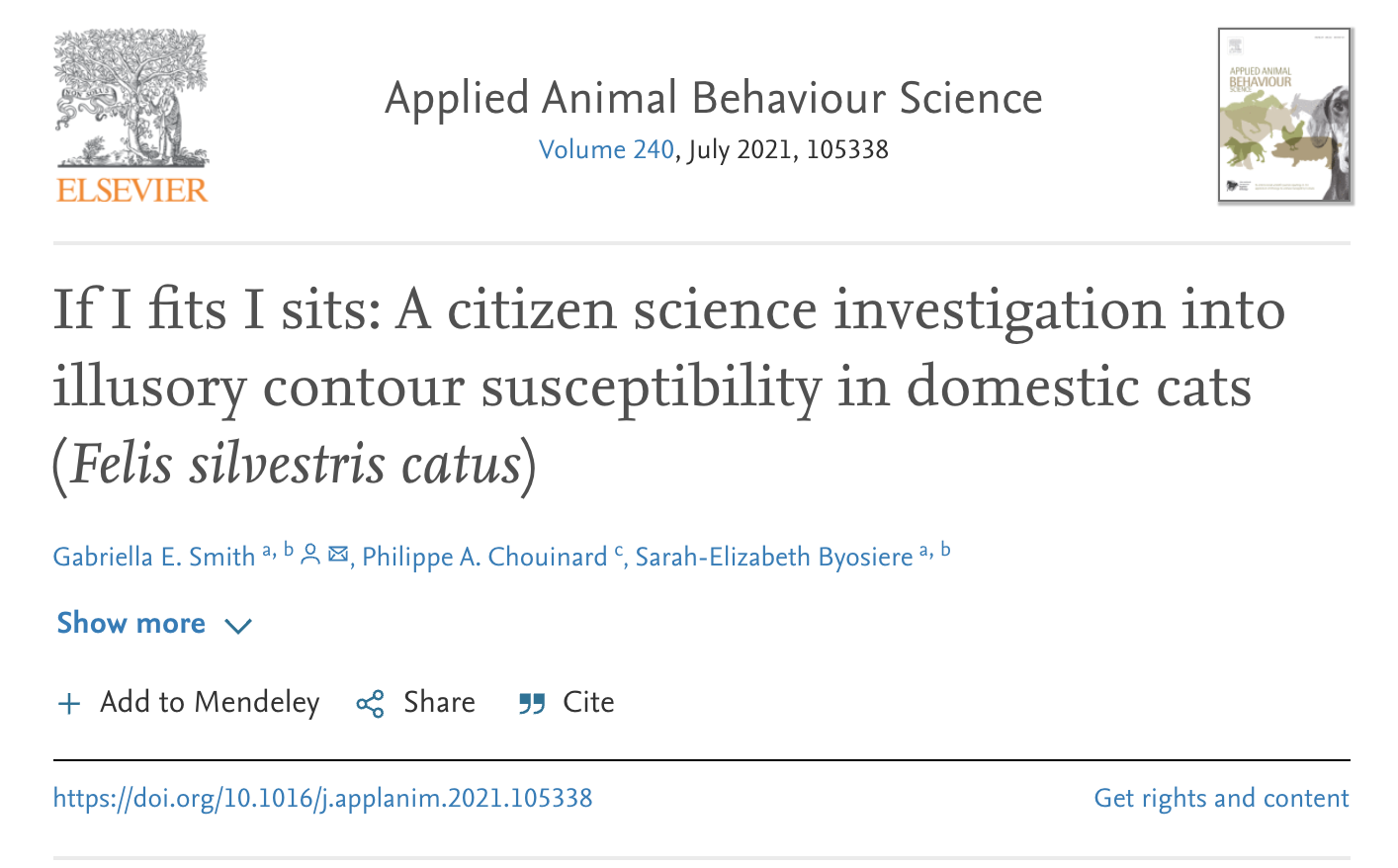 A well-known phenomenon to cat owners is the tendency of their cats to sit in enclosed spaces such as boxes, laundry baskets, and even shape outlines taped on the floor. This investigative study asks whether domestic cats (Felis silvestris catus) are also susceptible to sitting in enclosures that are illusory in nature, utilizing cats’ attraction to box-like spaces to assess their perception of the Kanizsa square visual illusion. Carried out during the COVID-19 pandemic, this study randomly assigned citizen science participants Booklets of six randomized, counterbalanced daily stimuli to print out, prepare, and place on the floor in pairs. Owners observed and videorecorded their cats’ behavior with the stimuli and reported findings from home over the course of the six daily trials. This study ultimately reached over 500 pet cats and cat owners, and of those, 30 completed all of the study’s trials. Of these, nine cat subjects selected at least one stimulus by sitting within the contours (illusory or otherwise) with all limbs for at least three seconds. This study revealed that cats selected the Kanizsa illusion just as often as the square and more often than the control, indicating that domestic cats may treat the subjective Kanizsa contours as they do real contours. Given the drawbacks of citizen science projects such as participant attrition, future research would benefit from replicating this study in controlled settings. To the best of our knowledge, this investigation is the first of its kind in three regards: a citizen science study of cat cognition; a formal examination into cats’ attraction to 2D rather than 3D enclosures; and study into cats’ susceptibility to illusory contours in an ecologically relevant paradigm. This study demonstrates the potential of more ecologically valid study of pet cats, and more broadly provides an interesting new perspective into cat visual perception research.

Sadly, the full article isn’t available anywhere that I can find. So all I can say is that it shows that 9 out of 30 cats tested selected the “Kanisza illusion” just as often as a square and more often than the control, which shows that they see the illusion as equivalent to a square, and that a square on the floor is chosen more often than the control (I don’t know what that is) as a sitting spot.

From ScienceAlert; the Kanizsa illusion is presumably the one on the right, which produces an illusory square. 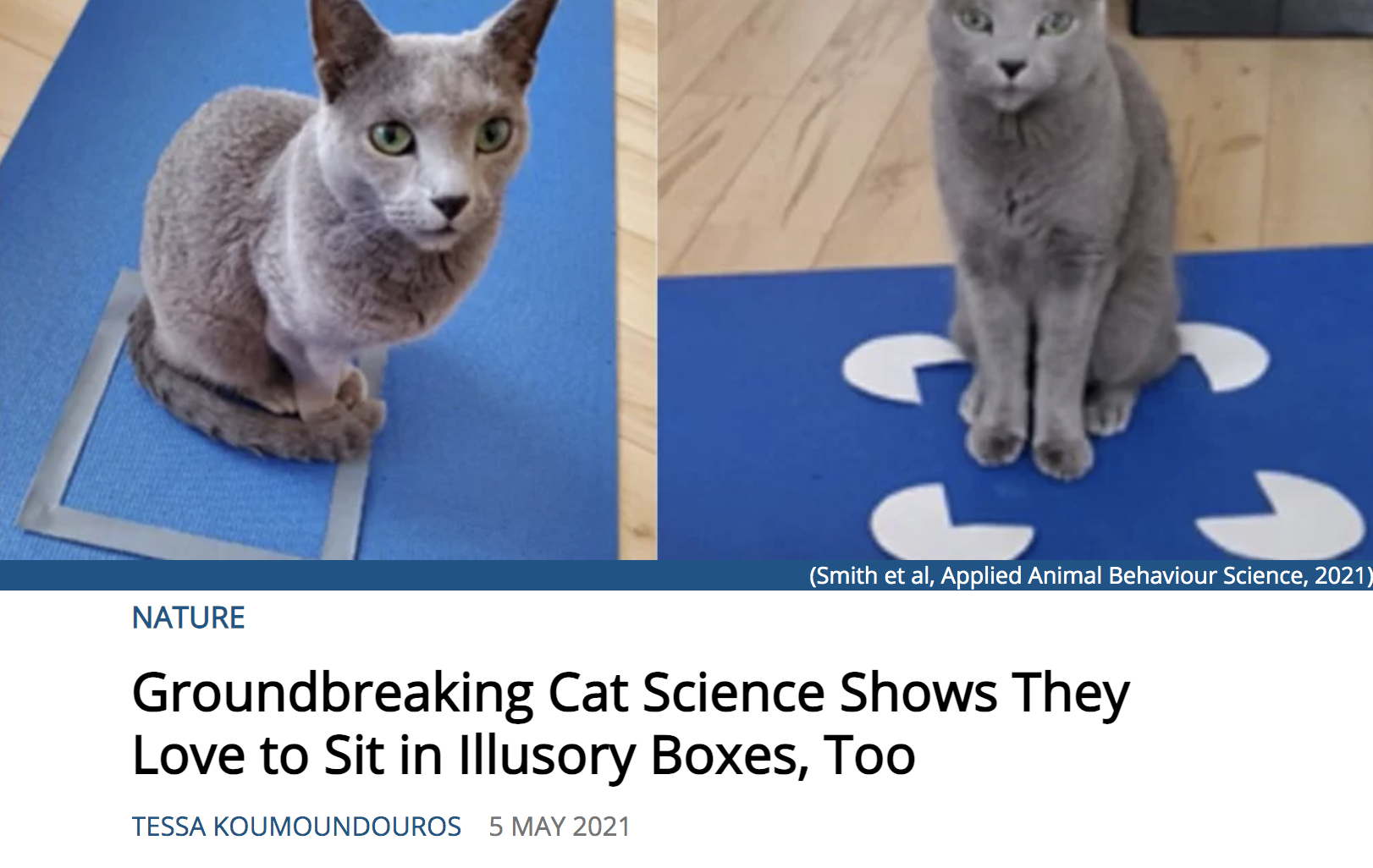 Cognitive ethologist Gabriella Smith from the City University of New York and colleagues recruited humans to set up floor objects for their feline lordlings to choose from – a taped square, a visual illusion of a square, and the same components as the visual illusion, but not arranged to produce a square (the control).

The cat owners were required to film the cats’ response under reasonably controlled conditions to avoid influencing the animals’ choices (this involved wearing sunglasses, too). While over 500 pet cats were originally enrolled, the final data set shrunk down to 30 citizen scientists who managed to complete all the necessary trials.

So pleased to announce that my paper, "If I Fits I Sits: A Citizen Science Investigation into Illusory Contour Susceptibility in Domestic Cats (Felis silvestris catus) has just been published in AABS! #IfIFitsISits #CatSquare #CitizenScience #CommunityScience pic.twitter.com/AXbDttnOGC

“The cats in this study stood or sat in the Kanizsa and square stimuli more often than the Kanizsa control, revealing susceptibility to illusory contours and supporting our hypothesis that cats treat an illusory square as they do a real square,” they found.

Of course, not all cats want to be predictable like that:

My cat is such a jerk that she contributes to the replicability crisis. pic.twitter.com/Jpz9BQSXw2

Tentative conclusion: cats (but not all of them) perceive imaginary contours just as humans do.

An excerpt with some history:

The paper was inspired in part by a 2017 viral Twitter hashtag, #CatSquares, in which users posted pictures of their cats sitting inside squares marked out on the floor with tape—kind of a virtual box. The following year, lead author Gabriella Smith, a graduate student at Hunter College (CUNY) in New York City, attended a lecture by co-author Sarah-Elizabeth Byosiere, who heads the Thinking Dog Center at Hunter. Byosiere studies canine behavior and cognition, and she spoke about dogs’ susceptibility to visual illusions.  While playing with her roommate’s cat later that evening, Smith recalled the Twitter hashtag and wondered if she could find a visual illusion that looked like a square to test on cats.

Smith found it in the work of the late Italian psychologist and artist Gaetano Kanizsa, who was interested in illusory (subjective) contours that visually evoke the sense of an edge in the brain even if there isn’t really a line or edge there. The Kanizsa square consists of four objects shaped like Pac-Man, oriented with the “mouth” facing inward to form the four corners of a square. Even better, there was a 1988 study that used the Kanizsa square to investigate the susceptibility of two young female cats to illusory contours. The study concluded that, yes, cats are susceptible to the Kanizsa square illusion, suggesting that they perceive subjective contours much like humans.

. . .cats to sit inside, rather than the presence of shapes on the floor,” Smith told Ars. “Brains are very sensitive to contours that differ in luminance. Vision has evolved to answer questions having to do with boundaries and contours.”

The study comes with the usual caveats, notably the final small sample size (the result of participant attrition, a common challenge with citizen science projects). Smith and her co-authors also suggest replicating the study in a more controlled setting, despite the advantages gained from conducting the trials in the comfort of the cats’ own homes. “For the sake of cats, the home was really ideal, but otherwise, for the sake of science, it is best to do things in controlled settings [like a lab],” said Smith.

No quotes supplied, as all the relevant information is above.

I have seen many of the world’s Leonardos, but didn’t know he ever drew cats. But behold: “Study of a child with a cat” by the great man himself: 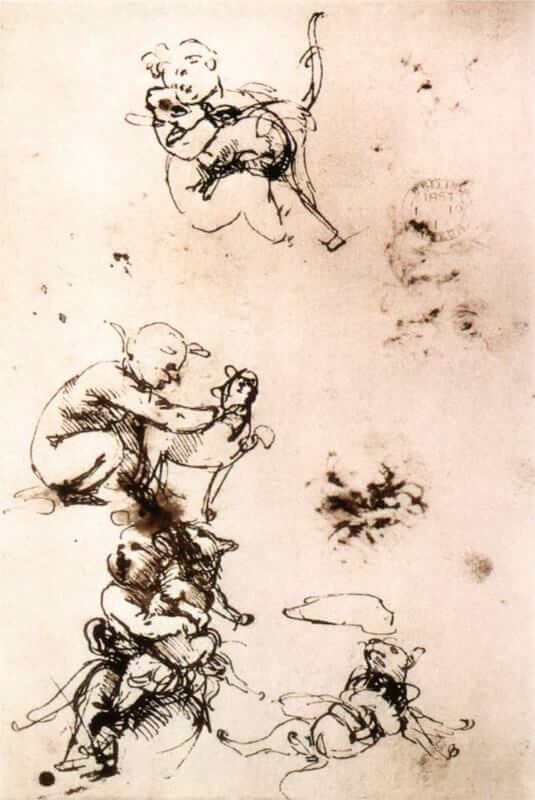 Lagniappe: Kittens rescued from a power line. How the deuce did they get up there?

“Suddenly, we came across a bunch of 4 cats stuck in a power pole and howling for help. Immediately, the whole company rallied to help save the cats. We brought mattresses and pillows from the whole company and we interpreted Elbad in the air by chance and fell. We made a bucket with a stick found and we began to lure them in his direction.”