Yes, one can argue that transwomen don’t have vaginas, though the strength argument can be backed up with data. Both claims may offend some people, but in the present case they apparently weren’t intended to offend anyone, and, at any rate, nearly all arguments offend someone.

But the assertion given in the title of the Times article below is surely not one that warrants persecution of the speaker. Although the UK doesn’t have a first amendment, the student’s claims do constitute free speech. This being the UK, however, offending someone is illegal.  Click on the screenshot to read: 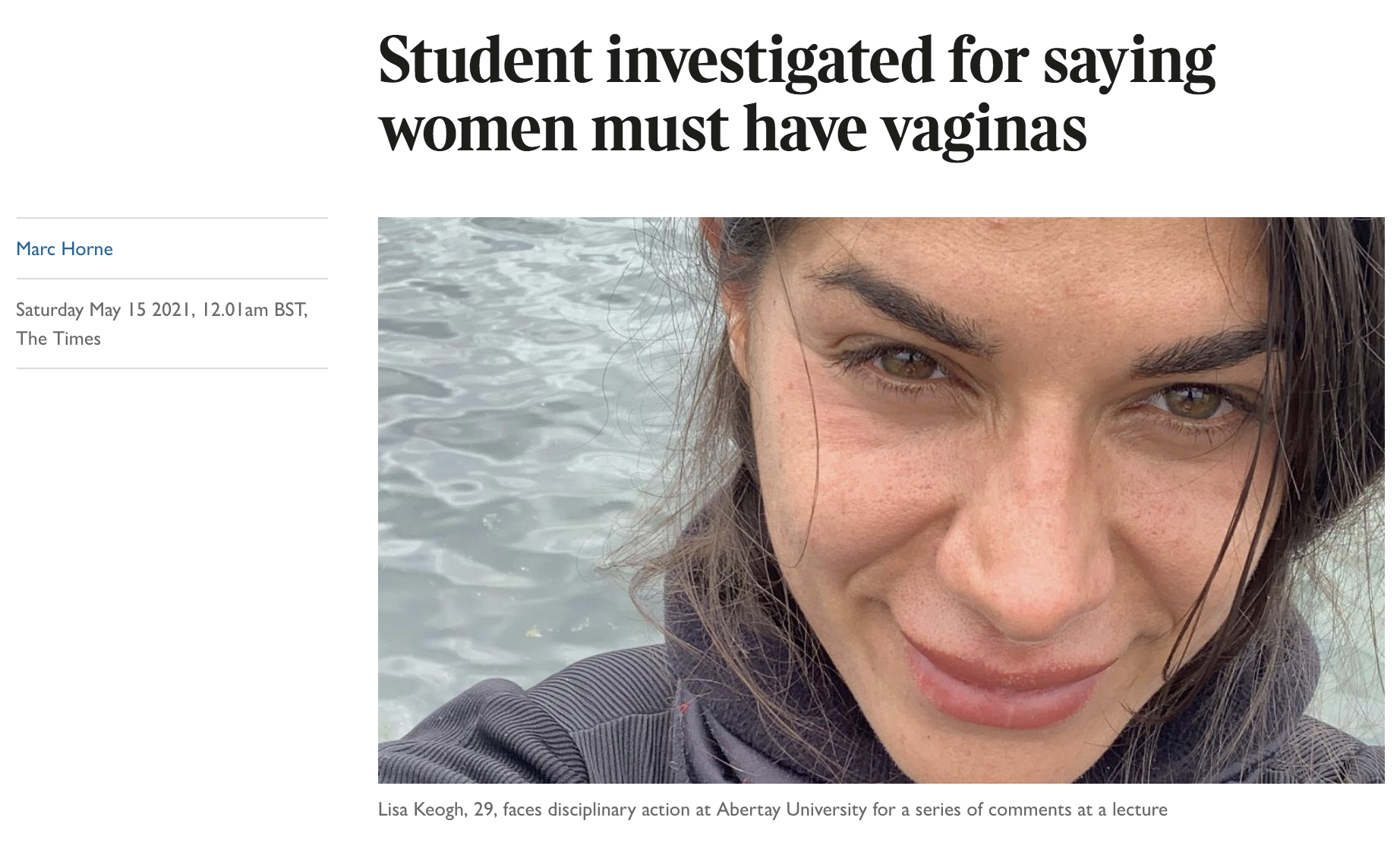 Disciplinary action is being taken against Lisa Keogh, 29, over “offensive” and “discriminatory” comments that she made during lectures at Abertay University, Dundee.

The mature student was reported by younger classmates after she said women were born with female genitals and that “the difference in physical strength of men versus women is a fact”. The complaints have prompted a formal investigation into her conduct.

Keogh, a final-year student, fears that any sanction could end her dream of becoming a human rights lawyer. Her case is being backed by Joanna Cherry QC, the SNP MP for Edinburgh South West and deputy chairwoman of the Lords and Commons joint committee on human rights, who described the situation as farcical.

Keogh was astonished to receive an email accusing her of transphobic and offensive comments during seminars on gender feminism and the law. “I thought it was a joke,” she said. “I thought there was no way that the university would pursue me for utilising my legal right to freedom of speech.”

But she also said this in response to some pushback she got:

She was accused of saying women were the “weaker sex” and classmates were “man-hating feminists” when one student suggested that all men were rapists and posed a danger to women.

“I didn’t deny saying these things and told the university exactly why I did so,” she said. “I didn’t intend to be offensive but I did take part in a debate and outlined my sincerely held views. I was abused and called names by the other students, who told me I was a ‘typical white, cis girl’. You have got to be able to freely exchange differing opinions otherwise it’s not a debate.”

Keogh claims that she was muted by her lecturer in a video seminar when she raised concerns about a trans woman taking part in mixed martial arts bouts. “I made the point that this woman had testosterone in her body for 32 years and, as such, would be genetically stronger than your average woman,” she said.

“I wasn’t being mean, transphobic or offensive. I was stating a basic biological fact. I previously worked as a mechanic and when I was in the workshop there were some heavy things that I just couldn’t lift but male colleagues could.”

Even so, when a classmate says that “all men are rapists” and “pose a danger to women”, that is surely at least as offensive as what Keogh is accused of saying. But that classmate isn’t being persecuted, despite that claim also violating University speech codes (see below). And Keogh’s response about “man-hating feminists” can be justified as a response to that statement.

“The weaker sex” argument, though often applied to more than just physical strength, in which case it’s misogynistic, was clearly meant in this case to refer to physical strength and nothing more.

This is exactly the kind of academic issue that can and should be debated in searching for the truth, and certainly not silenced. Yet Keogh (though not the person who said “all men were rapists”) is liable to be prosecuted by the University’s speech code.

The university’s definition of misconduct includes “using offensive language” or “discriminating against gender reassignment”. Punishment can be as harsh as expulsion.

Keogh, a mother of two, fears for her future. “I don’t come from a legal background and have worked incredibly hard to get to where I am,” she said.

“I’m worried that my chance of becoming a lawyer, and making a positive contribution, could be ended just because some people were offended.”

I am baffled why saying that biological women are physically weaker, or have vaginas, can constitute “discrimination”, though we know that there is a strict party line here, and questioning it is more or less taboo.

Keogh has a lawyer on the case:

Keogh, a final-year student, fears that any sanction could end her dream of becoming a human rights lawyer. Her case is being backed by Joanna Cherry QC, the SNP MP for Edinburgh South West and deputy chairwoman of the Lords and Commons joint committee on human rights, who described the situation as farcical.

This case would never stand in a U.S. public university, as persecution of Keogh for speech is clearly a violation of the First Amendment. Nor would any private school be prosecutorial enough to go after Keogh, as they’d find themselves on the wrong end of the stick vis-à-vis FIRE or the Academic Freedom Alliance. Under no circumstance should mere “giving of offense” be construed as “misconduct” unless it is persistent, constituting harassment.  As for “discriminating against gender reassignment”, I can’t see Keogh’s remarks falling into that class, as there was no discrimination, simply an argument.