I have two pieces to call to your attention, one by Bari Weiss and the other an announcement by an anti Israel NGO (non-governmental organization) showing the carnage inflicted on Palestinians by their own rockets. (Hamas has now started launching guided suicide drones.) 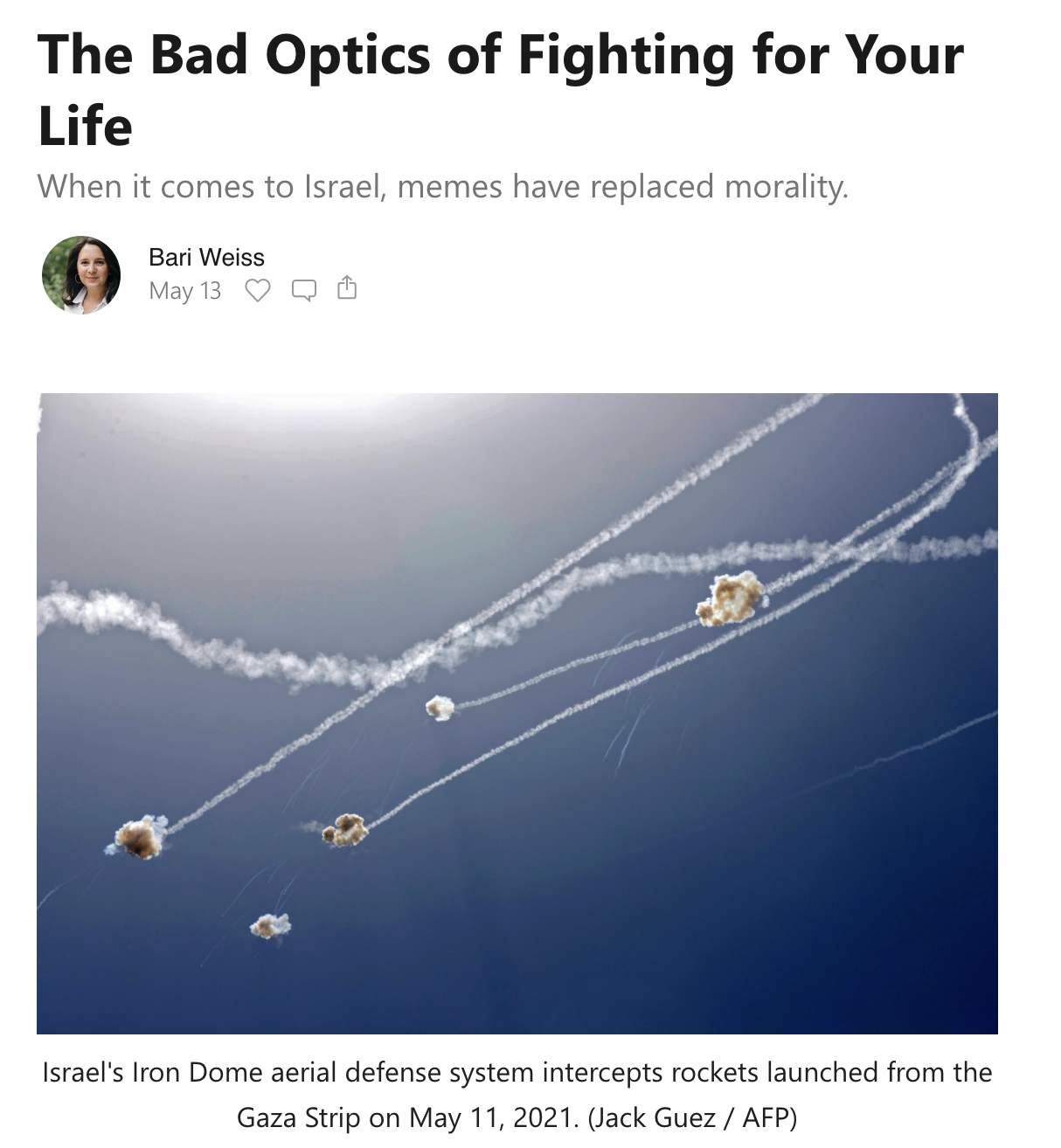 Weiss begins her piece by saying that she’s writing from a fertility clinic. She and her partner Nellie are trying to have a baby with IVF, and she ends her column saying this:

That’s why I’m writing this. And it’s why we’re trying to start a family.

I suppose this means they’re trying to create a family of truth-tellers, but of course you can’t control how your kids turn out, and even that reason seems a bit strange to me. Regardless, Weiss, who says she wept while writing the column, is distraught over what’s going on in Israel—especially the internecine violence, which, giving the lie to a touted intra-Israel harmony between citizen Arabs and Jews, also discombobulates me. In the meantime she weeps for the lies sweeping the world. Just an excerpt (she doesn’t let Israel off the hook, either); Weiss’s words are indented

As you may have gathered, this complicated truth about a tiny country surrounded by enemies making hard decisions about how to protect its citizens doesn’t sell. Hamas, its paymasters in Iran, and their allies in the Western press know this well, and are skilled in exploiting every piece of bad news about Israel’s actions that they can to promote The Narrative (™).

The Narrative (™) holds that all Hamas’s violence is the justified reaction to the original sin of Israel’s existence. That if Israel only withdrew to the 1967 borders, if only Israel abandoned settlements in the West Bank, if only Israel split Jerusalem in half, and so on and so forth, Hamas would cease launching rockets aimed at Israeli homes and schools.

The Narrative (™) insists that Israel is not just an oppressive force, but the last standing bastion of colonialism in the Middle East, white interlopers in a foreign land squatting on the rightful territory of brown people. Israelis are baby killers, they are racists, they are supremacists. And Zionists? What are we? We are the facilitators of all this evil.

Never mind the fact that most Israeli Jews are not of Eastern-European descent, but are from the Middle East and North Africa. (The history of Israel, despite what facile activists would have you believe, is not color-coded.) Never mind the fact that Zionism flourished in defiance of imperial British — and, in an earlier era, Ottoman — rulers.

Never mind the fact that Palestinian militants have regularly partnered with large, powerful nation-states in the region in an attempt to cripple Israel. Never mind that the Jewish people have an indigenous history in the land dating back thousands of years, and that most Israeli citizens came back to the Holy Land in the last century because nowhere else would have them.

None of that matters to The Narrative (™) — a story about good and evil that has taken thousands of years to perfect in which the Jewish people, and now the Jewish State, plays the role of villian.

When you grasp the depth of The Narrative (™) it makes sense to watch the way certain kinds of lies spread like wildfire. Among them, this popular meme, in which we are told that Israel is not a country:

Israel did not exist until 73 years ago when they were a settler colony that took over Palestine and have been violently maintaining their position ever since. If you don’t know this history here is a good primer to get you started: https://t.co/CoDp1yUkDj pic.twitter.com/cSLL17Aepe

Sarkeesian is a blithering idiot. But wait! There’s more!

Or this viral video, which has been viewed 14 million times and is a total fraud:

Lie: Israelis dancing & cheering because Al-Aqsa mosque has been bombed.

Truth: 1. It's a tree on fire 2. B/c pal protestors threw firecrackers on it. 3. The singing & dancing is for Jerusalem Day, which always ends at the Western Wall. https://t.co/xx4A631udy

. . . Take five minutes and read Hamas’s charter. It insists that “There is no solution for the Palestinian question except through Jihad” and that “there is no way out except by concentrating all powers and energies to face this Nazi, vicious Tatar invasion.”

. . . Nevertheless, The Narrative (™) rockets around the world, with influencers like Bella Hadid and Dua Lipa and Halsey, and progressive darlings like Ilhan Omar, Cori Bush, Marc Lamont Hill, Rashida Tlaib, and Alexandra Ocasio-Cortez, speaking in unison.

Even the smart celebrities are getting in on the action. Trevor Noah weighed in with this gem: “I just want to ask an honest question here. If you are in a fight where the other person cannot beat you, how much should you retaliate when they try to hurt you?”

Just so we have this straight: A country should accept a terrorist group launching deadly rockets at its civilian population because a comedian thinks that the terror group won’t win? If there was no Iron Dome, and more Israelis were killed by Hamas, would it be okay with the Noted Military Strategist Trevor Noah for Israel to . . . try to stop the rocket attacks? How many dead Israelis are necessary for a response to be OK? Did anyone have the temerity to tell America that we shouldn’t go after the Taliban or hunt Osama bin Laden after 9/11 because they had no realistic chance of destroying America?

. . . The world has gone Corbyn. Look online. When Andrew Yang, the frontrunner in the New York mayoral race, tweeted on Monday “I’m standing with the people of Israel,” AOC rallied the online hordes. The anodyne statement was, she said, “utterly shameful,” and the pile-on ensued. By Wednesday, Yang had all but apologized. The ratio is the new veto. How pathetic.

. . . . If you can’t stomach the whole thing —  there is a part about how the Jews were behind the French Revolution, the Communist revolution and control the media — watch this clip from last week of a senior Hamas official asking Palestinians to go out and buy five-shekel knives to chop off Jewish heads:

How come the Western media doesn’t publicize things like this? You don’t hear senior Israeli officials announcing imminent decapitations of Palestinians with cheap knives (5 shekels is about $1.50). But never mind—Palestinians have a right to call for decapitations because they’re oppressed. And we all know about the Jew hatred and Israel-destruction taught to Palestinian children from the time they are very young. They don’t do that in Israel. But never mind—Palestinians have a right to teach hatred and murder because they’re oppressed. (Perhaps Dr. King should have taken a lesson from Gaza!)

And one more piece, which shows that many people, including the dead children invariably imputed to IDF activities in news reports, are actually caused by malfunctioning Hamas rockets. This comes from an Israeli website reporting verbatim on news put out by an NGO (Defense for International Children Palestinian [DICP]) which is against Israel.

Defense for Children International-Palestine, an extraordinarily anti-Israel NGO which has made bald-faced lies in the past, has unwittingly proven that most of the children killed in Gaza so far have been killed by Hamas – and others are killed because they are human shields. A quote from the Israeli site which you can verify on the DICP site):

In their report about Tuesday’s events, they say:

An Israeli drone-fired missile killed 15-year-old Mohammad Saber Ibrahim Suleiman shortly after 6 p.m. while he and his father Saber Ibrahim Mahmoud Suleiman were on their agricultural land outside the city of Jabalia, according to documentation collected by Defense for Children International – Palestine. Father and son were both killed instantly. Mohammad’s body was subsequently transferred to the Indonesian hospital in Jabalia where doctors reported there were shrapnel wounds throughout his body.
Mohammad’s father was reportedly a commander in Izz Ad-Din Al-Qassam Brigades, a Palestinian armed group and the armed wing of Hamas, according to information collected by DCIP.

Mohammad was a human shield for his father. But what DCI-P admits next is amazing

In a second incident around 6:05 p.m., initial investigations suggest a homemade rocket fired by a Palestinian armed group fell short and killed eight Palestinians, including two children. The rocket landed in Saleh Dardouna Street near Al-Omari Mosque in Jabalia, North Gaza, according to evidence collected by DCIP. Mustafa Mohammad Mahmoud Obaid, 16, was killed in the blast, and five-year-old Baraa Wisam Ahmad al-Gharabli succumbed to his injuries around 11 p.m. on May 10.
Palestinian security sources and explosives experts indicated the cause of this explosion was a Palestinian armed group rocket that fell short. Another 34 Palestinian civilians were injured in the blast, including 10 children, according to DCIP’s documentation.

Eight killed and 34 injured from one Hamas rocket.

Six Palestinian children and two adults were killed in a third blast that occurred around 6 p.m. in Beit Hanoun about 800 meters (2,600 feet) west of the Gaza Strip perimeter fence. Those killed included Rahaf Mohammad Attalla al-Masri, 10, and her cousin Yazan Sultan Mohammad al-Masri, 2; brothers Marwan Yousef Attalla al-Masri, 6, and Ibrahim Yousef Attalla al-Masri, 11; as well as Hussein Muneer Hussein Hamad, 11, and 16-year-old Ibrahim Abdullah Mohammad Hassanain, according to information collected by DCIP. When the blast occurred, members of the al-Masri family were reportedly harvesting wheat in the field outside their home, and their children were playing nearby, according to information collected by DCIP.
DCIP has not yet confirmed the cause of these deaths. At the time of the incident, Israeli drones and warplanes were reportedly overhead and Palestinian armed groups were firing homemade rockets towards Israel. DCIP continues to investigate these incidents to determine and identify the responsible parties.

The deaths of the al-Masri family was already confirmed by Israel on Tuesday as being from Hamas rockets. There was clearly no military target and Israel doesn’t randomly target a family – Israel diverts rockets when it sees children in the area, and they were outside.

Do not get me wrong: these are tragedies—self-inflicted ones, to be sure—but none the less tragic for that. The point is that all this misery then gets blamed directly on Israel, and finds its way into the Western media and the Internet.

Just remember, when people come on the internet, or make pronouncements like those of Trevor Noah or Anita Sarkeesian, more likely that not they know very little about what’s going on in Israel and almost nothing of the history of that country. (Alternatively, they could be ideologically blinkered.) I can’t say I’m an expert myself, but I do try to keep up. All I can say now, though, is that Israel has every right to defend itself against rockets from Gaza, but that one possible solution (a ground invasion of Gaza) seems untenable, while quashing an internecine civil war between Israeli citizens seems impossible. It’s ineffably sad that Israeli Jews and Arabs who once considered themselves friends and neighbors are now beating each other up and killing each other.