Today’s diverse photos come from reader, anthropologist, and photographer Tony Eales from Queensland. You can enlarge his photos by clicking on them, and his captions are indented.

To answer the call for the readers’ wildlife segment and boost the tank I present some of the other critters and one plant that I photographed on my road trip to the tropical north of my state of Queensland.

First is Cosmophasis micarioides, a small jumping spider found throughout eastern Queensland, and highly variable. The mature males all look the same, with stripes of iridescent aquamarine, white and black; indeed all the male Cosmophasis in Australia are variations on that theme. The females are more colourful with patches of red, green, sometimes purple and golden brown. This one is a juvenile, which in the tropical north are the most colourful of all. In South East Asian species these spiders are often colourful wasp mimics. That may be what the juveniles are going for here, but I can’t think of a wasp model offhand. 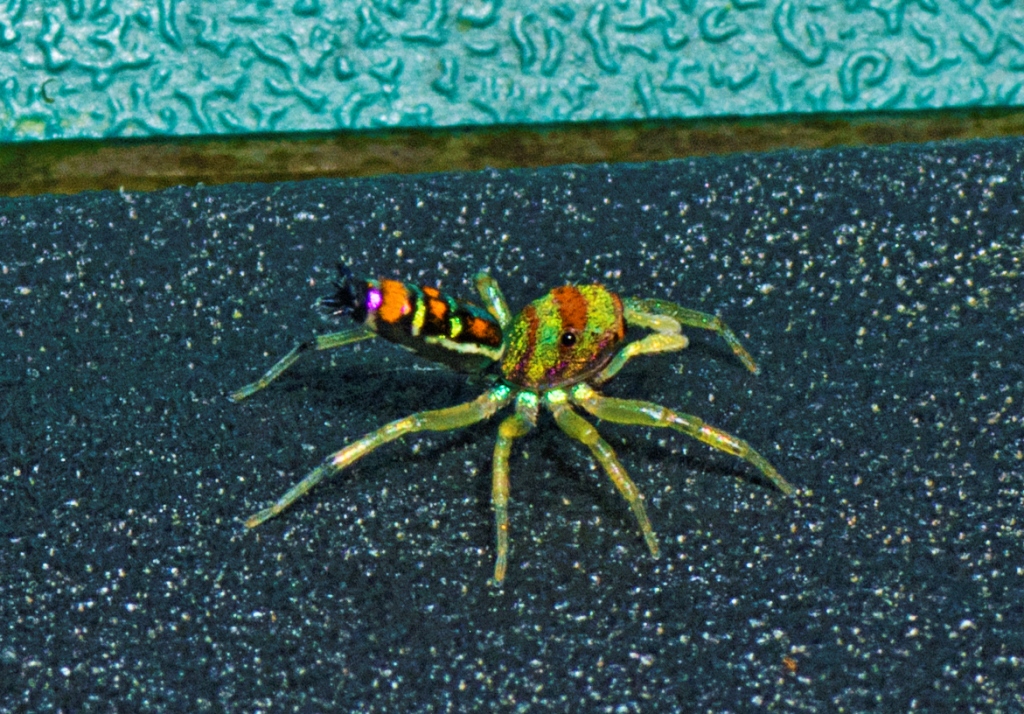 Ethmostigmus rubripes is the Australian giant centipede. It’s not as big as the giant centipedes I encountered in Borneo, but they’re still very impressive beasts. This one was probably a shade over 160mm. It was very fast and darted about looking to hide from my light. I can imagine it would deliver a very painful bite if one attempted to handle it. 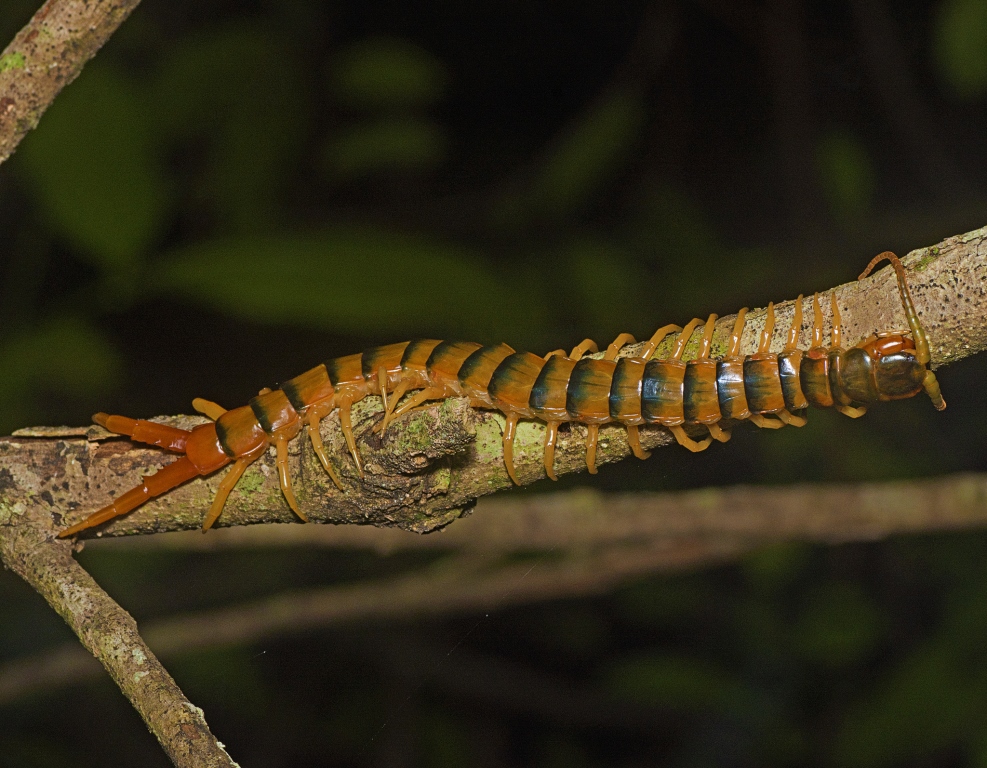 The Peppermint Stick insect (Megacrania batesii) likes to eat the leaves of the many Pandanus trees in north Qeensland. I had seen pictures of them and have always been struck by their odd colouration. They look more like a plastic toy version of green than one that would really help with camouflage. 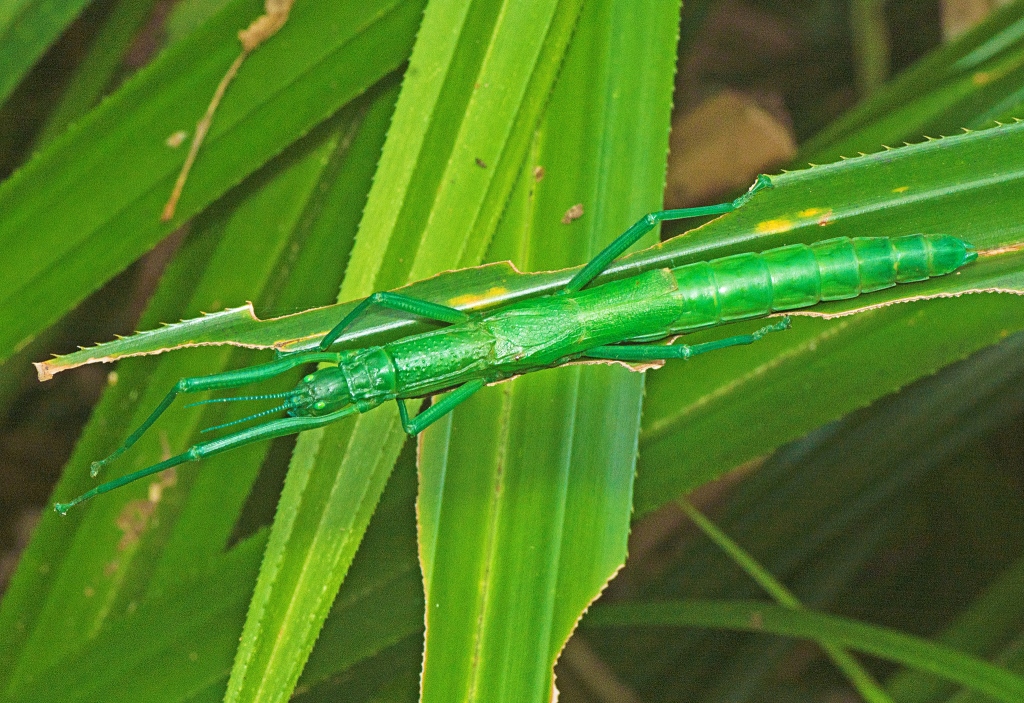 I’m sad that I didn’t get a good shot of these prehistoric looking Orange-footed Scrub Fowl (Megapodius reinwardt). They were common enough around the gardens of Port Douglas where we were staying. From a distance you could watch them scratching the leaf litter, but they would slip off into the dense plants when approached. 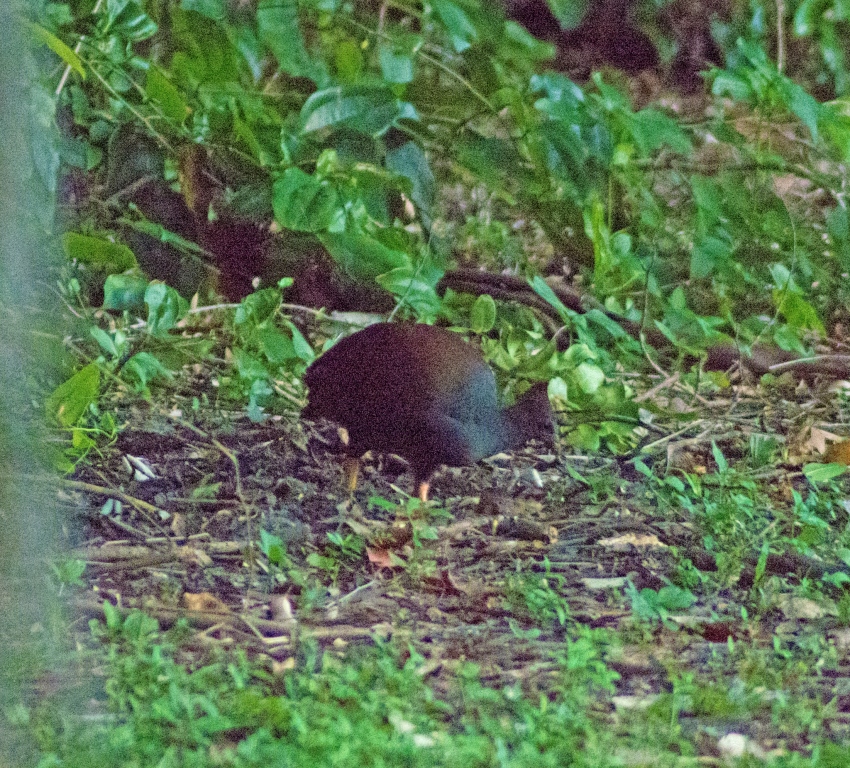 It was great to see these relatively large Southern Spotted Velvet-Geckos (Oedura tryoni) around Eungella National Park. During my lifetime, my home town of Brisbane has been overrun by introduced Asian House Geckos (Hemidactylus frenatus,) displacing the shyer natives and patrolling every outdoor light. It’s hard to describe the happiness of seeing a gecko running around the walls and noticing that it wasn’t one of those intruders. 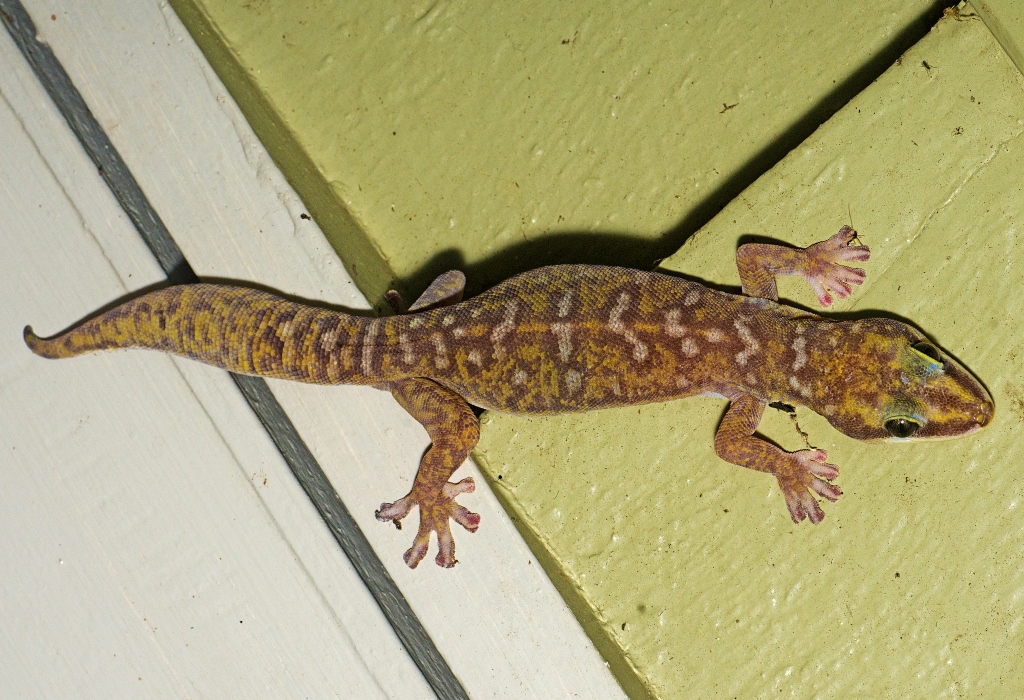 Real treat for me was to see my first Emperor Gum Moth (Opodiphthera eucalypti). Technically, I have seen the caterpillars, which are spectacular in their own way, but this was my first adult attracted to the lights at a lonely highway rest stop. 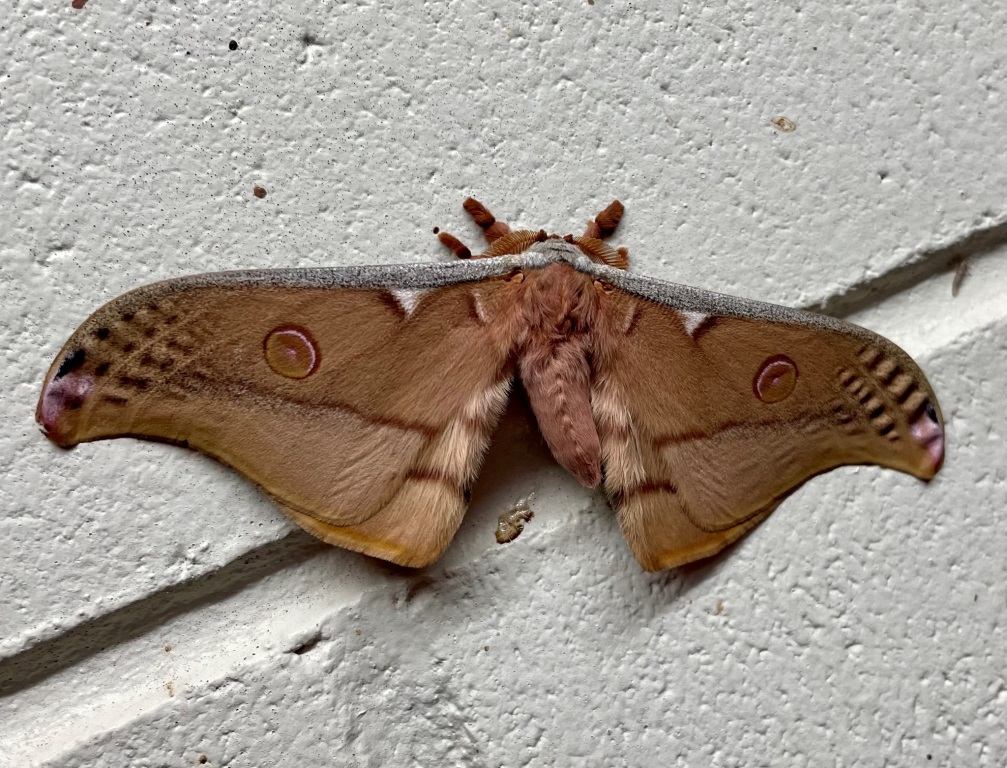 I kind of bombed out on my bucket list spiders for this trip, but one long-desired species that I did photograph was the Australian Lichen Huntsman (Pandercetes gracilis). The camouflage is so good I was only able to see it because of the eyeshine. Night hunting Wolf Spiders and Huntsmans have very strong reflective eyeshine, making them easy to find at light with a torch. 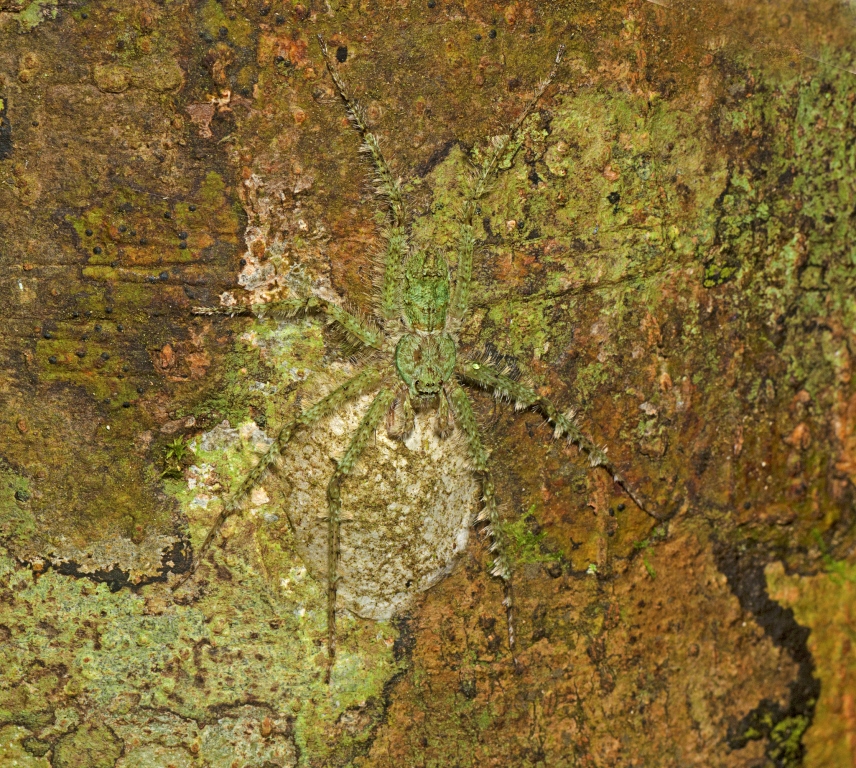 It was only because I had stopped to look at the Huntsman that I noticed this other master of camouflage nearby. This is the Northern Spiny Rainforest Katydid (Phricta spinosa). I was on a night walk with my wife and a friend, and this friend and I were exclaiming about how crazy this Katydid looked and my wife, who was standing with her face only a foot or so away from it, was saying “Where? What are you looking at?” When I pointed it out, she yelped and literally jumped back as it was hidden right under her nose. 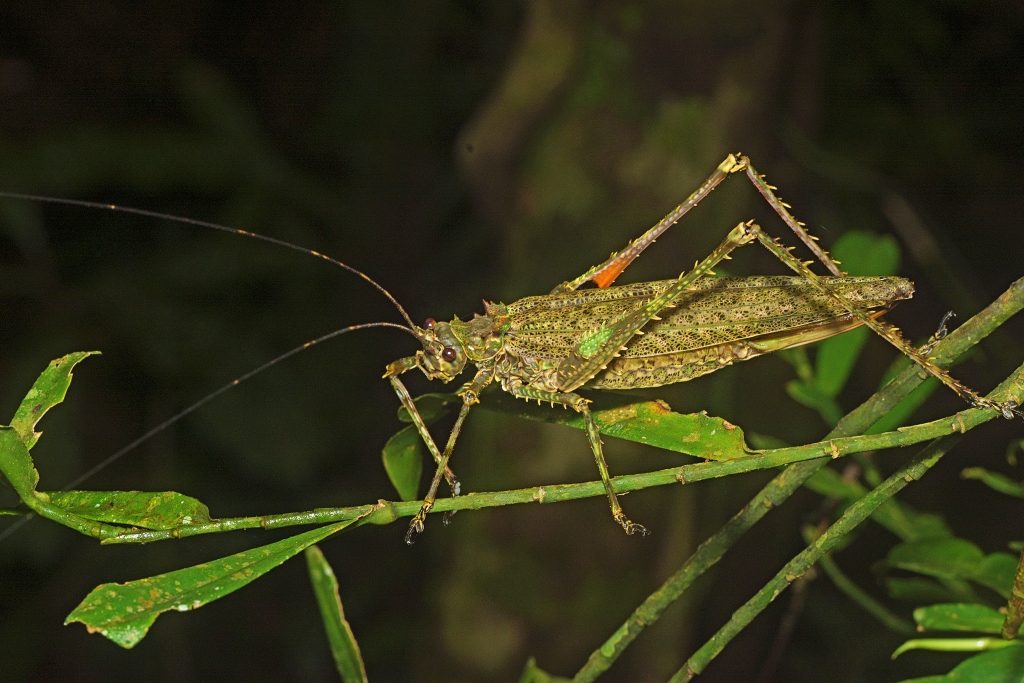 I also found several of these strange Theridula sp., one of the comb-footed spiders. The photo suffered from my inability to see what I was focussed on because the humidity of the rainforest fogged up my camera viewfinder and my glasses all the time. I didn’t get a single shot that wasn’t focused on the leaf background instead of the spider. 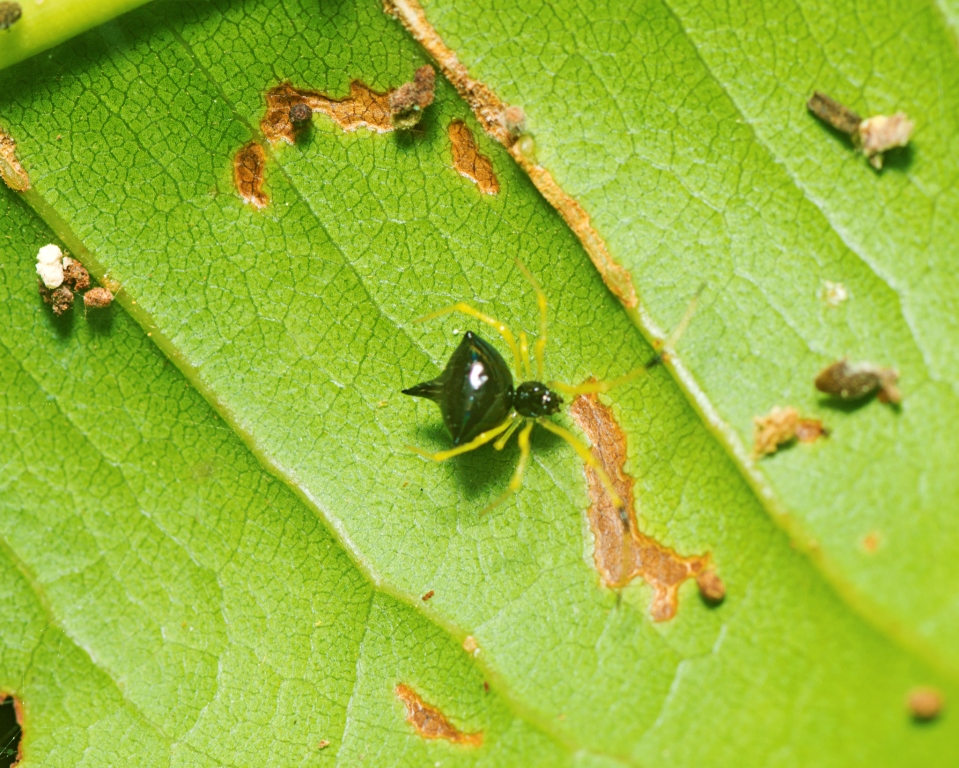 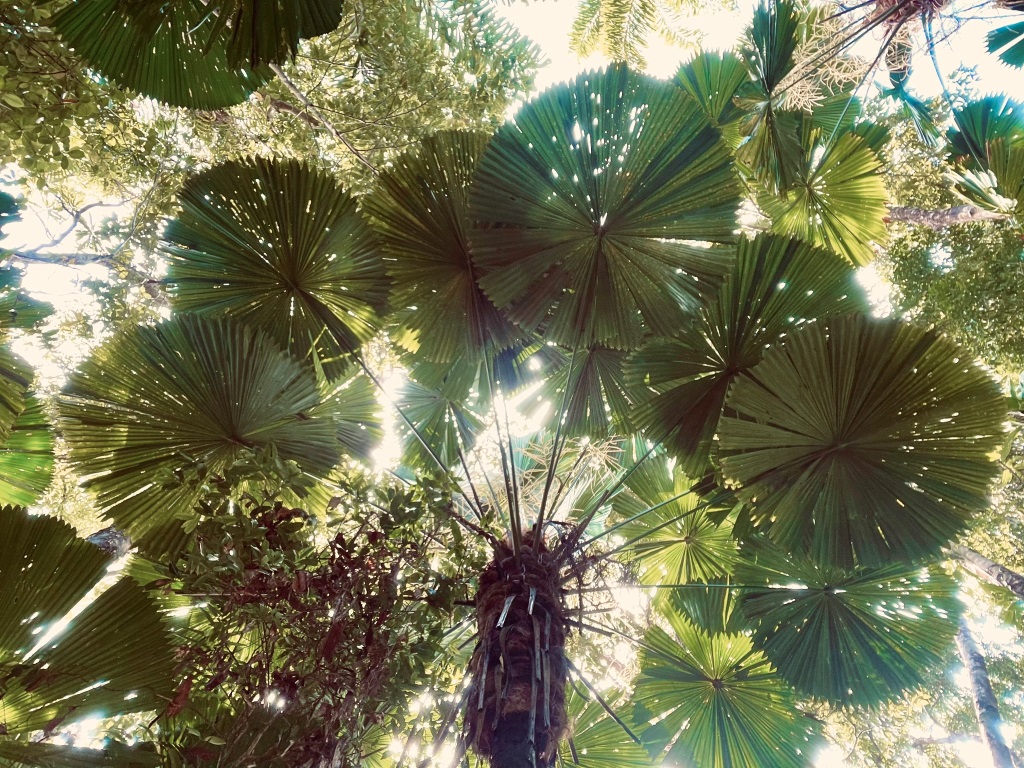