One of the mysteries of evolutionary biology is the existence of groups of eukaryotic animals (animals with true cells) who don’t appear to have sex. These include some ostracods, mites, and stick insects, as recounted in the first paper below, which came out last year.

But the biggest mystery of all is a group that’s been studied for years (the first individual was described by van Leewenhoek in 1677): the bdelloid rotifers, a class of rotifers (rotifers constitute a phylum) which have never been known or seen to have sex. Laine et al., in the second paper below, estimate that at least half a million bdelloid individuals have been examined by biologists over the years, and not one male has ever been found. Nor has copulation or anything that looks like sex ever been seen. Every individual of the group is a female who produces eggs by parthenogenesis (asexual reproduction). The group is about ten million years old, and sex was a property of its ancestor, which we can see by showing that its relatives all reproduce sexually, implying that bdelloids lost sex secondarily. But why? Who knows? What we’re concerned about here is whether they really are, as all the textbooks say, totally asexual.

Bedlloids are small but multicellular, and possess, despite being only a few tenths of a millimeter long, “ganglia, muscles, digestive, excretory, reproductive and secretory systems; photosensitive and tactile sensory organs, and structures for crawling, feeding, and swimming.” (From Laine et al.)

Here’s what one looks like, it’s an individual of Adineta vaga, the subject of the first study below:

So are they really totally asexual? If that were the case, it would be an evolutionary puzzle because if you can’t reproduce by mingling your genes with those from other individuals, you are impeded from combining adaptations occuring in different individuals, and that hinders evolution. Suppose one female has a mutation for heat tolerance and another individual for salt tolerance. If your environment became hot and salty, sexual individuals could mate and get both genes together; but this combination cannot happen in the absence of sex.

Asexuality is thus thought to be an evolutionary “dead end”, and most such lineages haven’t thrived over evolutionary time, usually going extinct. (The origin of sex is also a mystery, for if you’re parthenogenetic, you can leave twice as many of your genes compared to those who bequeath only half their genes to any offspring. But we’ll leave that conundrum, called “the cost of sex”, aside for now.)

The fact is that nearly all species of animals, and most plants, have sex, and once you have it, it makes good evolutionary sense to keep it.

But why have the bdelloids persisted for so long?

One suggestion, which was supported by a bit of genetic data a decade or so ago, is that they’re actually having sex on the sly—they are, to take a term from evolutionist John Maynard Smith, “sneaky fuckers”. The problem is that if this is true, as the two new papers below suggest, WHERE ARE THE DAMN MALES?  Well, we don’t know, and neither do the authors of these papers.

The two papers (the second is unpublished yet) use DNA sequencing to look for signs of sex in the sequence of the genome. The first paper (click on screenshot, pdf here and reference below) sequenced complete genomes taken from 11 individuals of A. vaga.

This second paper, from bioRχiv (pdf here), did the same thing, but with fewer isolates and using a different species of bdelloid, Macrotrachella quadricornifera. You may recognize the last author, Matt Meselson, a very famous biologist whose 1958 work with Frank Stahl (called “the most beautiful experiment in biology”) showed that DNA replicates by unzipping and synthesizing a new single strand on each of the unzipped original strands (“semiconservative replication”). For that, they should have won a Nobel Prize, and it puzzles me why they didn’t.

And now here we are 63 years later, and Matt (a terrifically nice guy) is still going strong, but has been working on sex in rotifers as a new area. Fertile minds find fertile areas of inquiry. 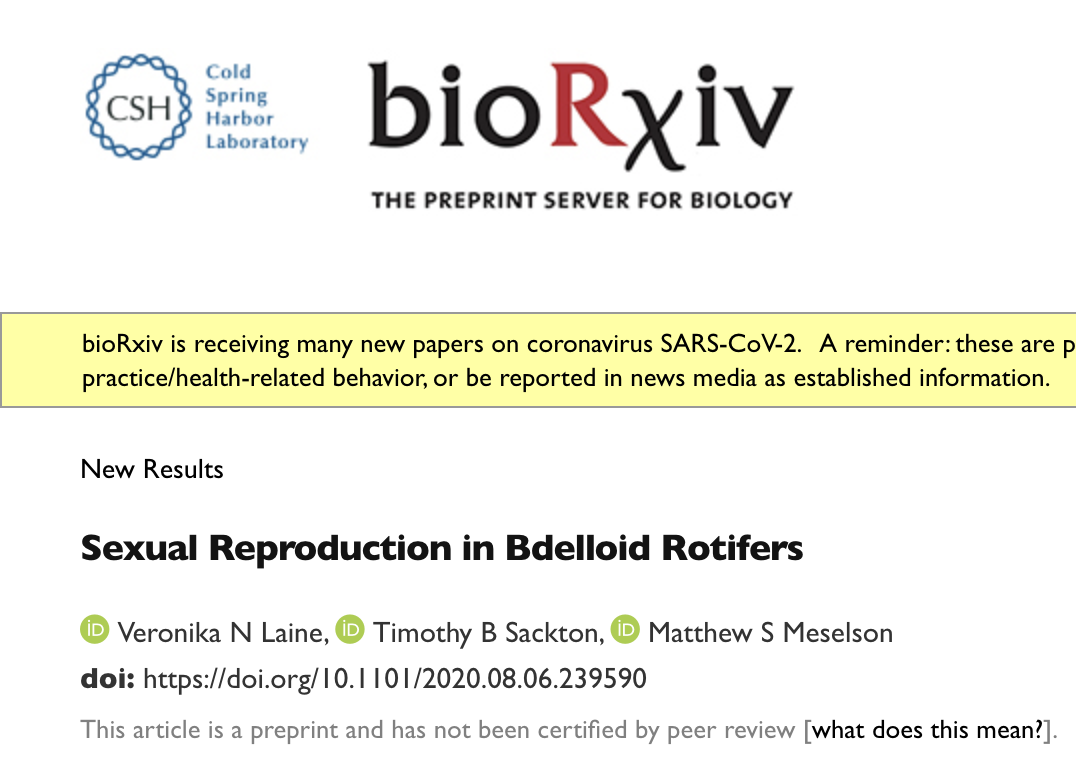 The upshot is that both studies suggest, in different ways, that bdelloids do have sex, for genetic patterns indicate that different individuals have recombined their genes over time. The sneaky sex isn’t frequent—once every 10 to 100 generations estimated in the first paper and at least one sexual event in the last 100-200 generations in the second sample.

The genetic data suggesting meiosis (formation of gametes) and recombination, both features of sexual reproduction, include these observations:

a.) The occurrence of genotypes (combinations of genes) in “Hardy-Weinberg” proportions, which can occur only by sexual reproduction.

b.) The appearance of mixing of genes along chromosomes, so that the farther two genes are apart on a chromosome, the more likely they are to not be associated with each other. This is a pattern you’d expect with sexual rather than clonal reproduction, as clones show complete association of genes along chromosomes since no recombination occurs. Recombination tends to break up gene combinations, and the farther the genes are apart on the chromosome, the more often this happens.

c.) Different combinations of genes show different “family trees” or phylogenies, which again is not expected under clonal reproduction because, since all genes are permanently frozen in one genome, they should all evolve together by mutation and selection, and should thus show the same family tree.

d.)  The appearance, in the second paper, of patterns of genetic variation that makes the different clones appear to be genetic relatives formed by sexual reproduction. This pattern: rotifers from different places share big segments of DNA at many places along the genome, but not at many others, a pattern expected with recombination occurring during sex but not clonal reproduction.

Now two other processes could in principle produce the appearance of sex when it doesn’t really occur: horizontal gene transfer (HGT), in which vectors like viruses or bacteria take DNA from an individual and inject it into another one. This could create patterns looking like sex but doesn’t involve gametes being formed and uniting to form zygotes.

The other is gene conversion, in which one gene can turn the other copy on a sister chromosome into its own type.  I won’t get into the gory details, but both authors have pretty strong arguments about how these two non-sex-processes CANNOT explain the DNA-sequence data.

Now this group isn’t like animals that have to have sex every generation: bdelloids usually reproduce clonally but appear to rarely have sex. The big question is the one above; if they’re really having sex, and it damn well looks like it, where are the males?  Is there some cryptic way that sex can occur without us being able to find the males? Laine et al. suggest that males might appear very sporadically, perhaps “confined to only a short interval during a population bloom [rapid expansion], therefore requiring frequent sampling for their detection.”

So, as happens so often, the mystery has deepened. We still don’t know why bdelloids are mostly clonal, and we still haven’t seen males, but now we think they do have sex from time to time. We just don’t know how. OR there may be some mysterious way of mixing your genes with other individuals without having HGT or conventional sex.

As for the sexless ostracods, stick insects, and mites, well, they haven’t been studied very closely.

15 thoughts on “Bdelloid rotifers, once the poster group for having no sex, now thought to have been bonking on the sly”