Yes, today is my last half-day in Texas, as I’m flying home around noon from Austin. But I didn’t leave without one more visit to a BBQ joint. Yesterday I decided to go back to Black’s (homage to Amy Winehouse) in Lockhart, as I hadn’t tried their famous Giant Beef Ribs, and it was only a half-hour drive to the Austin Airport, near where I stayed last night.

The drive from La Grange to Lockhart was lovely, going mostly on small roads through tiny towns—just the kind of drive I like. I’ve managed to almost completely avoid the Interstate Highway system here, though Texas state roads can also be large and soulless.

When I saw a bunch of cows huddled around a giant wooden cross, I knew I had to stop. How often does one see good Christian beeves? 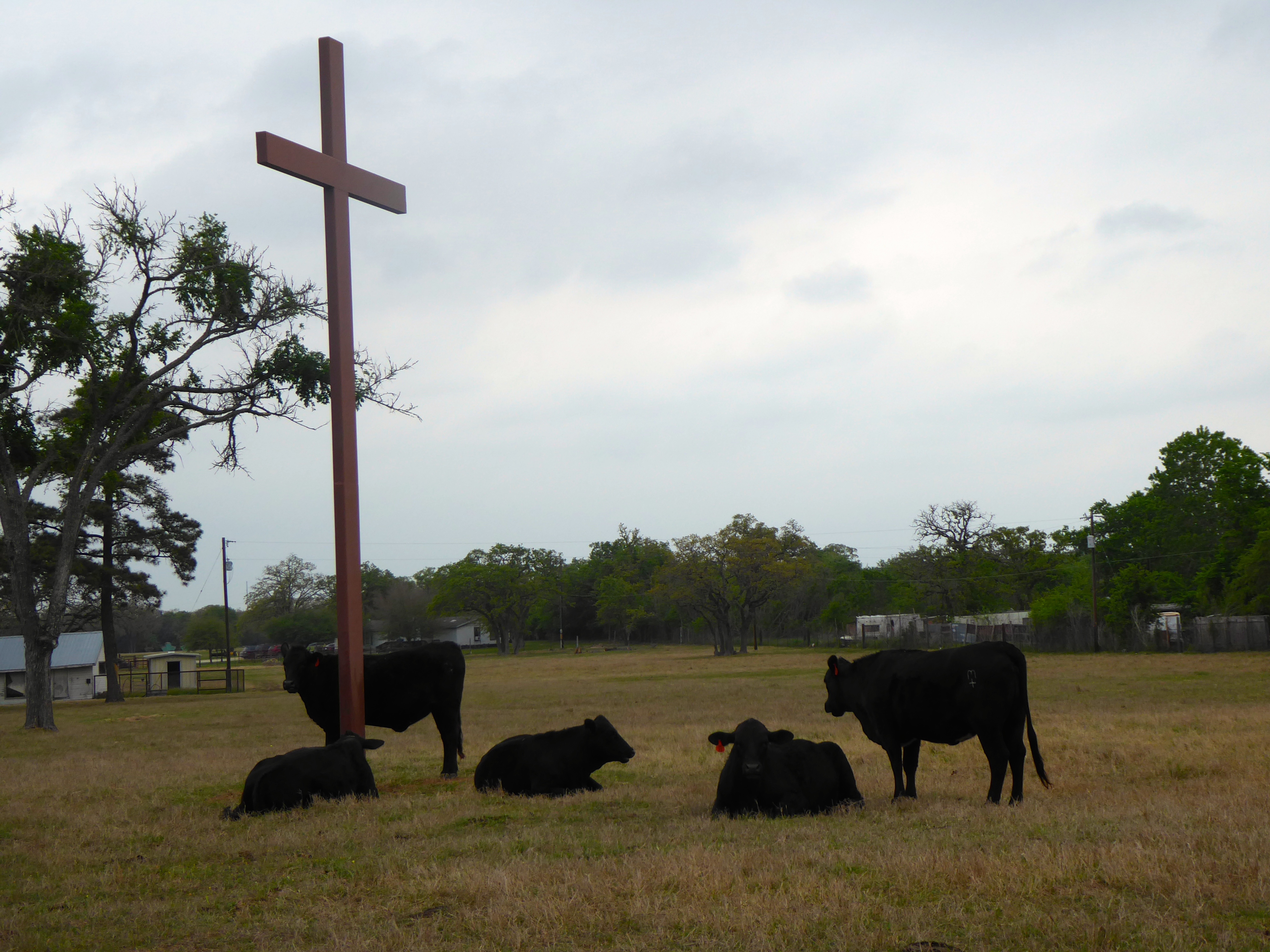 I stopped and communed with the cows for a while. They were much tamer than most of the cows I’ve encountered, which tend to move away from you. One even came up to me and thrust its muzzle against the fence, demanding a petting: 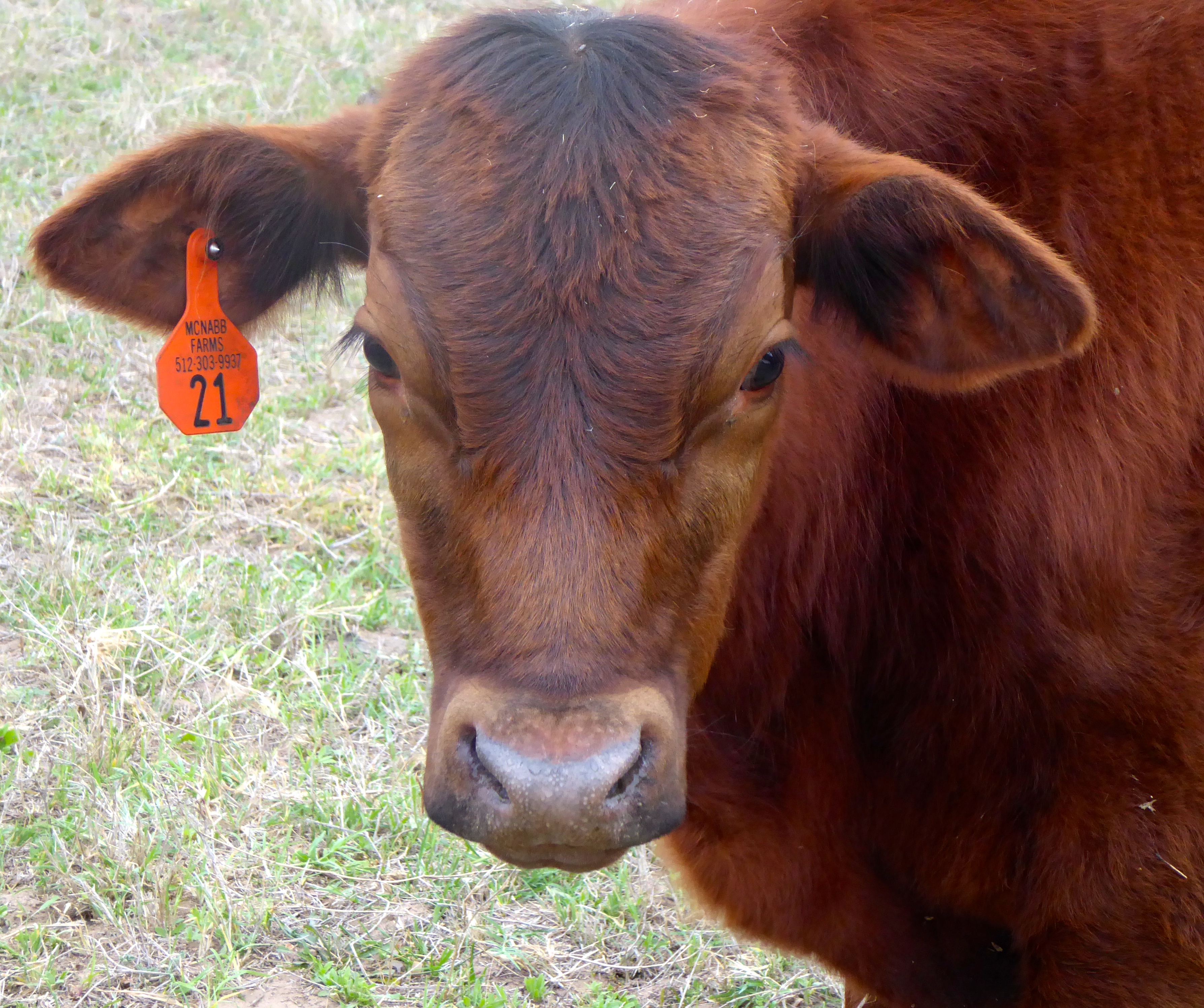 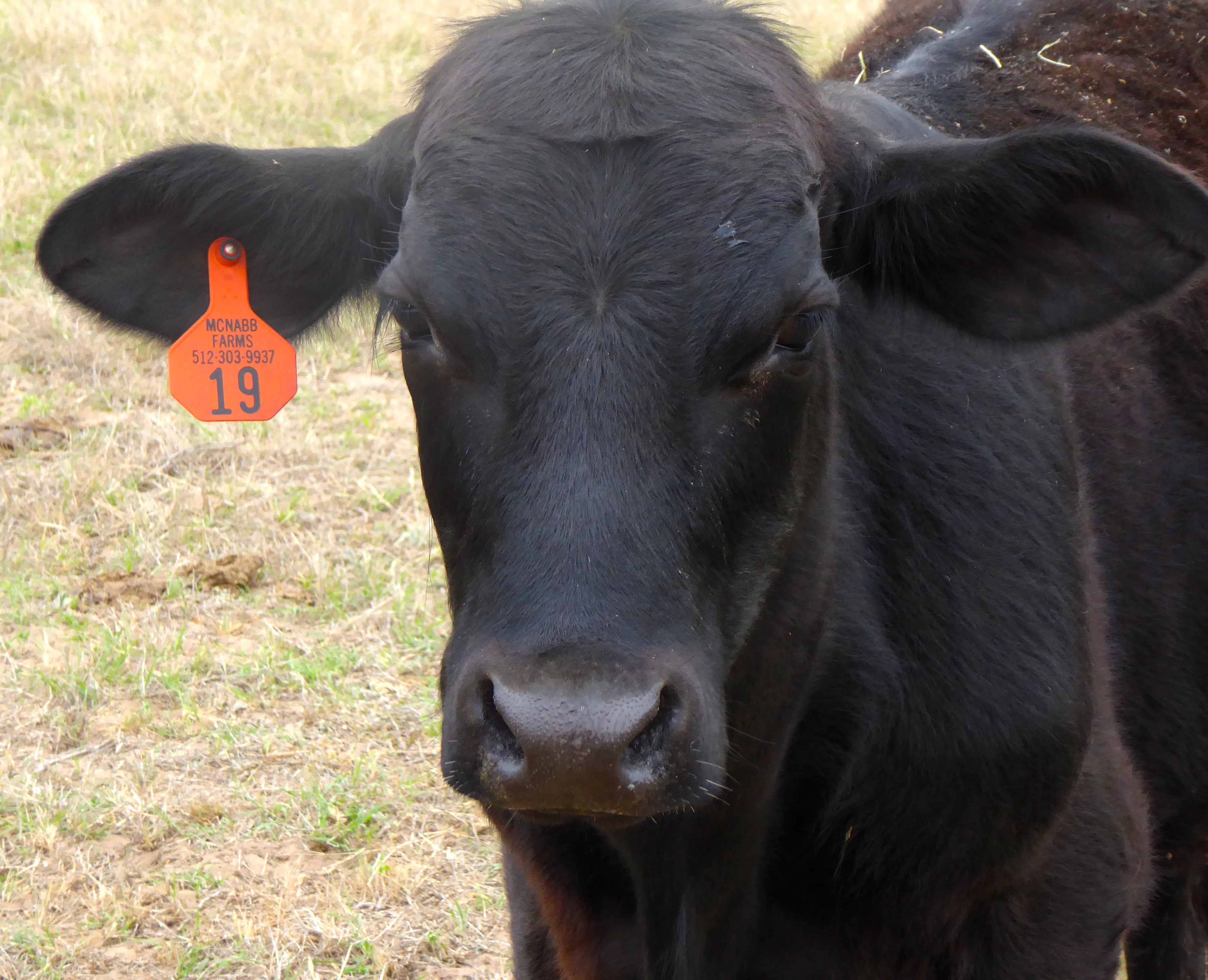 This cow was really demanding, so I had to pet and scratch its head for a while: 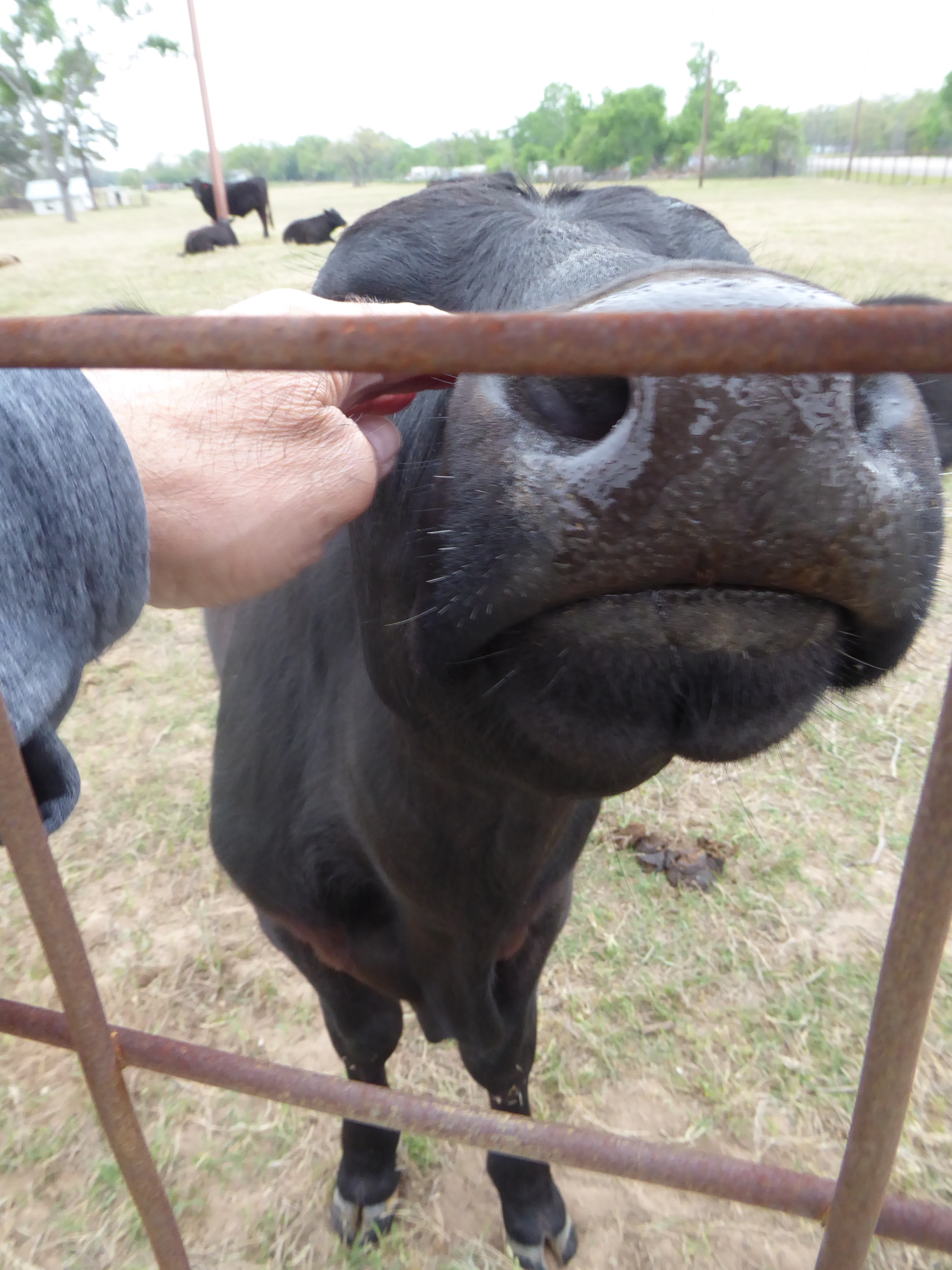 On to Black’s, where my heart was set on a giant beef rib. I haven’t had too many ribs this trip, and Black’s serves the Mother of All Ribs. You’ll see what I mean below.

The unprepossessing entrance with a GIANT BEEF RIBS! sign: 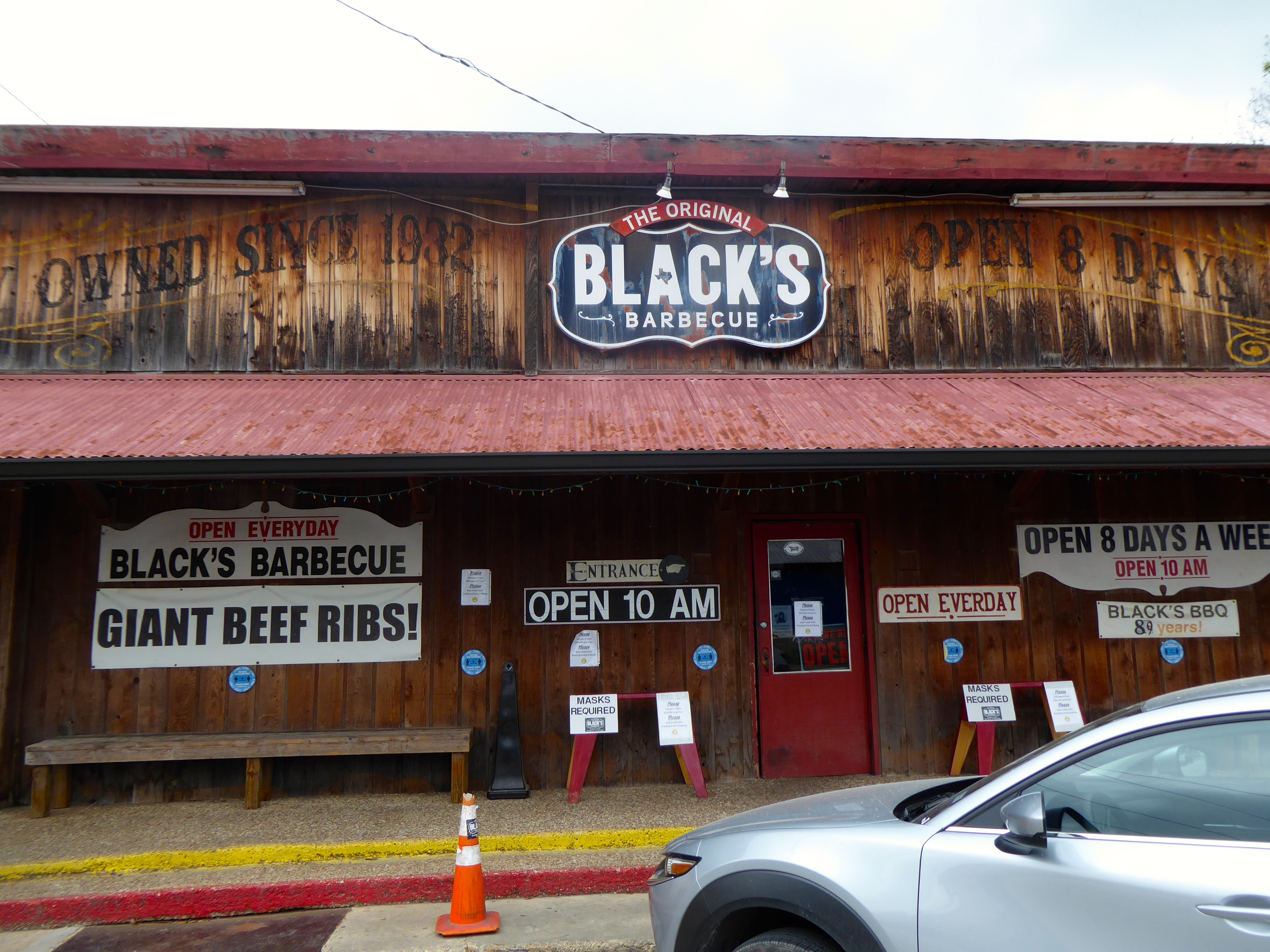 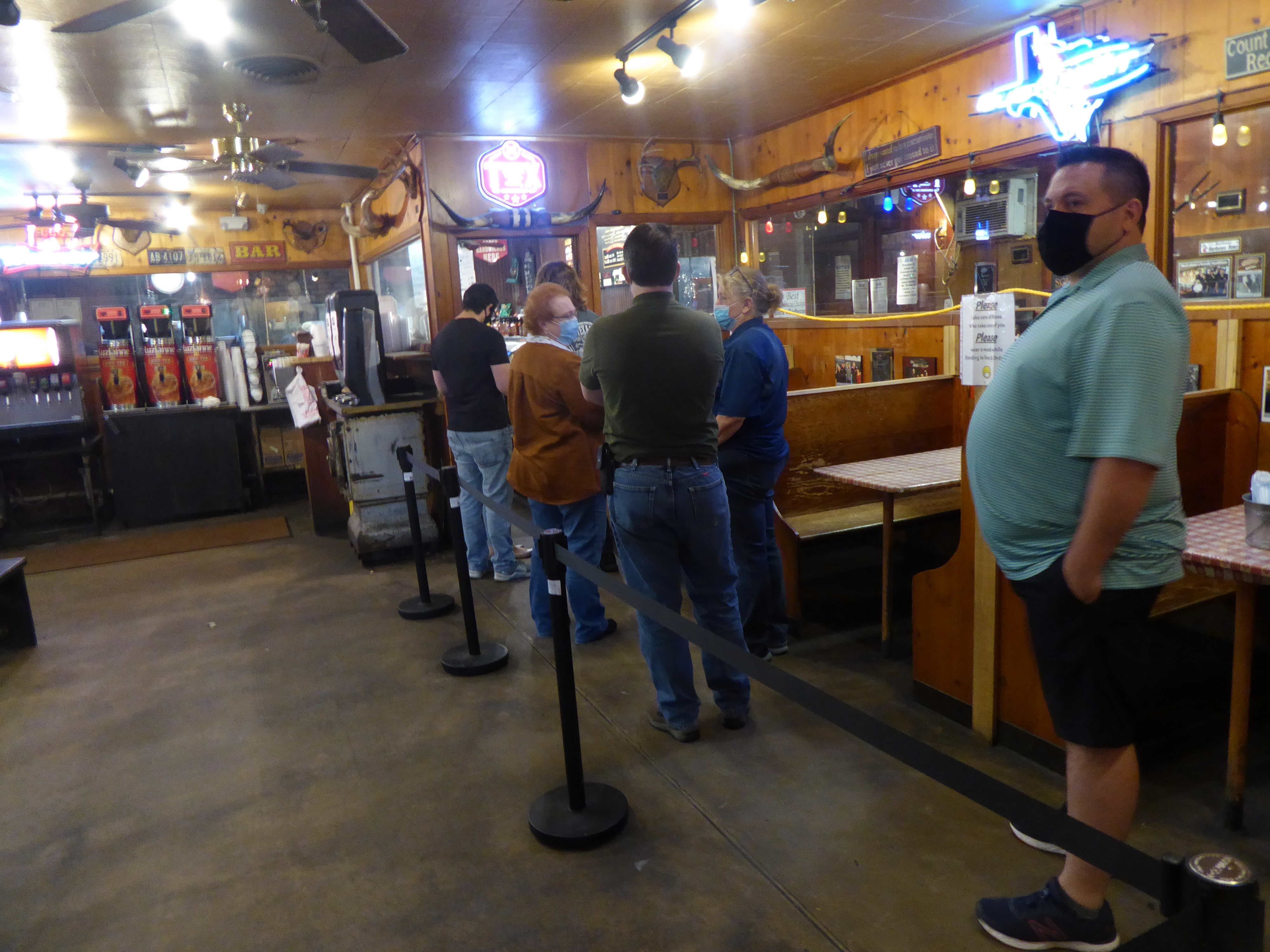 As you wait for your ‘cue, salivating over the smells from the pit, you pass a picture of one of the Black family with LBJ, who used to throw BBQs, complete with a chuck wagon, for dignitaries visiting the Western White House. 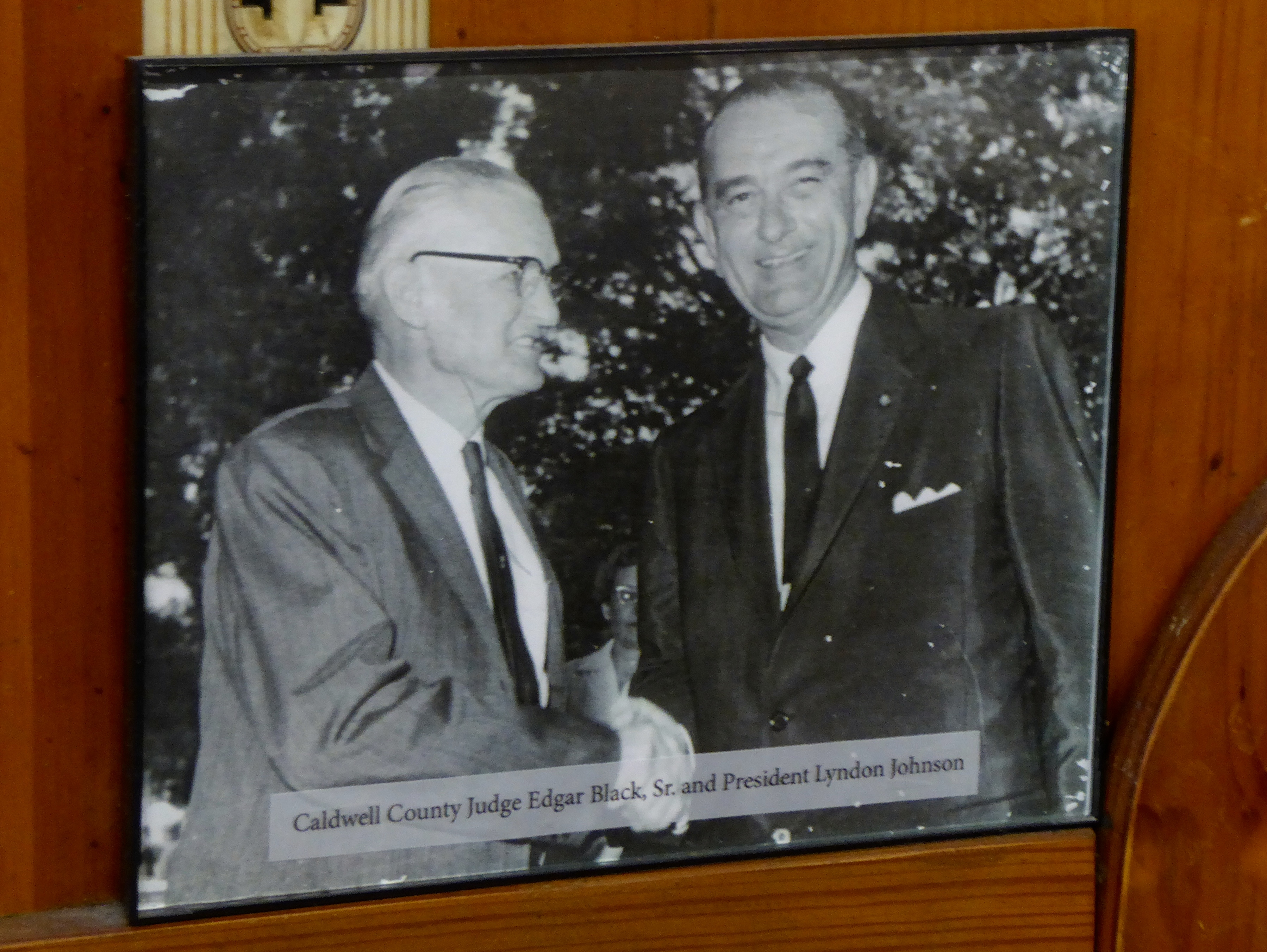 These, I guess, are the owners themselves in days of yore: 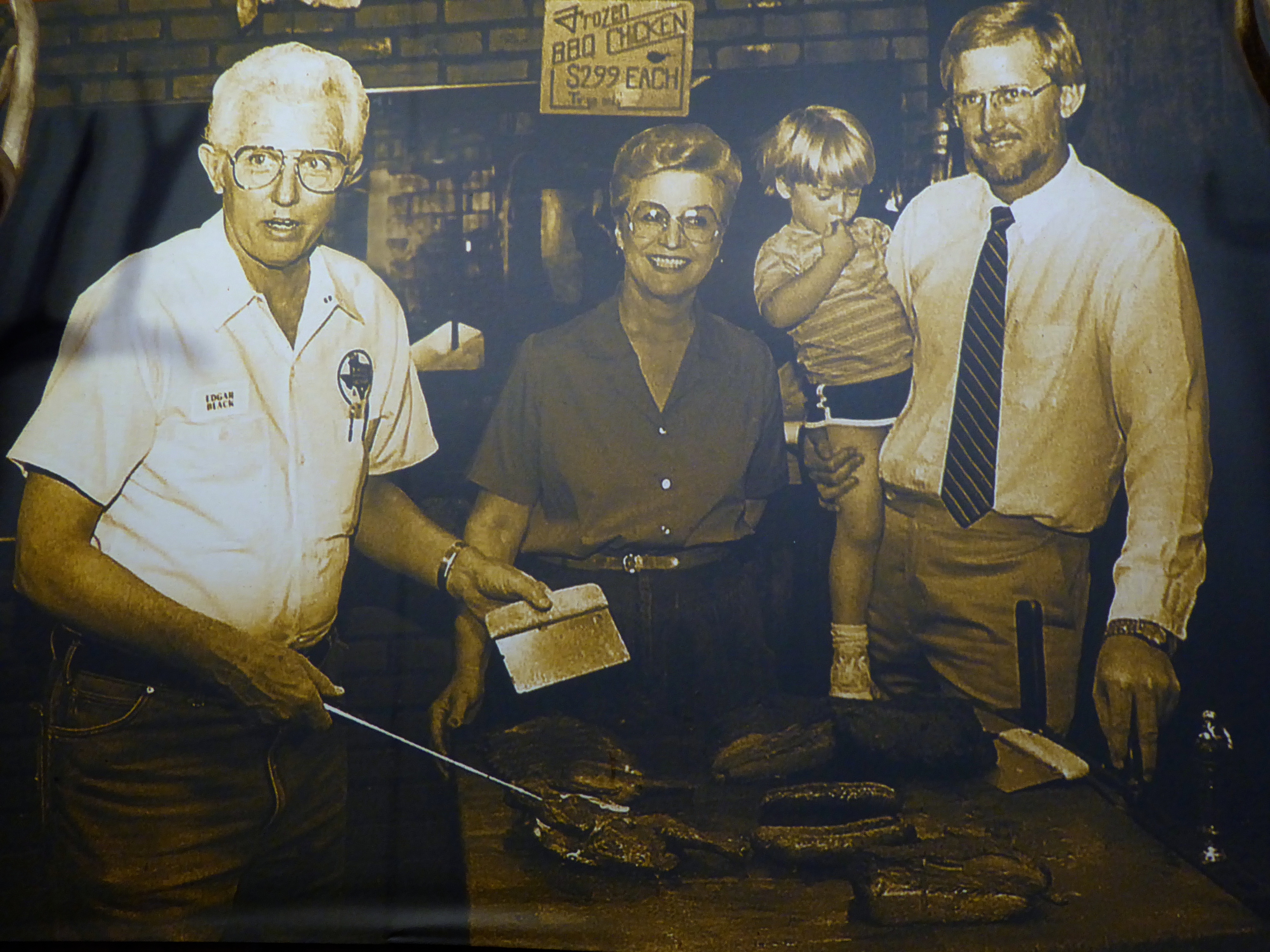 The dining room (there are two), full of happy people. How can you be glum when eating BBQ? 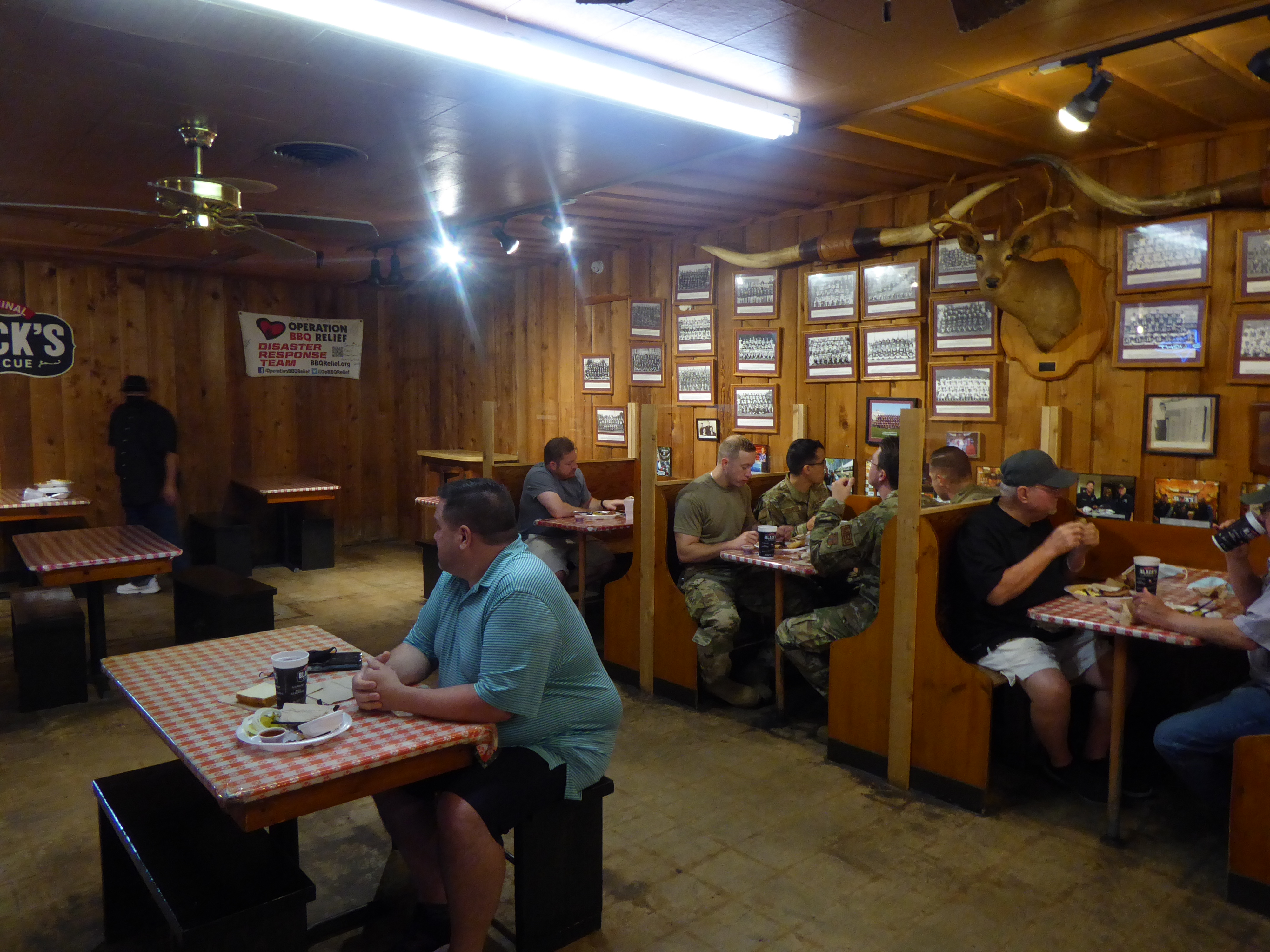 The menu. You have to choose quickly. The giant beef ribs aren’t cheap—$18.99 per pound—but I was going to get one come hell or high water. 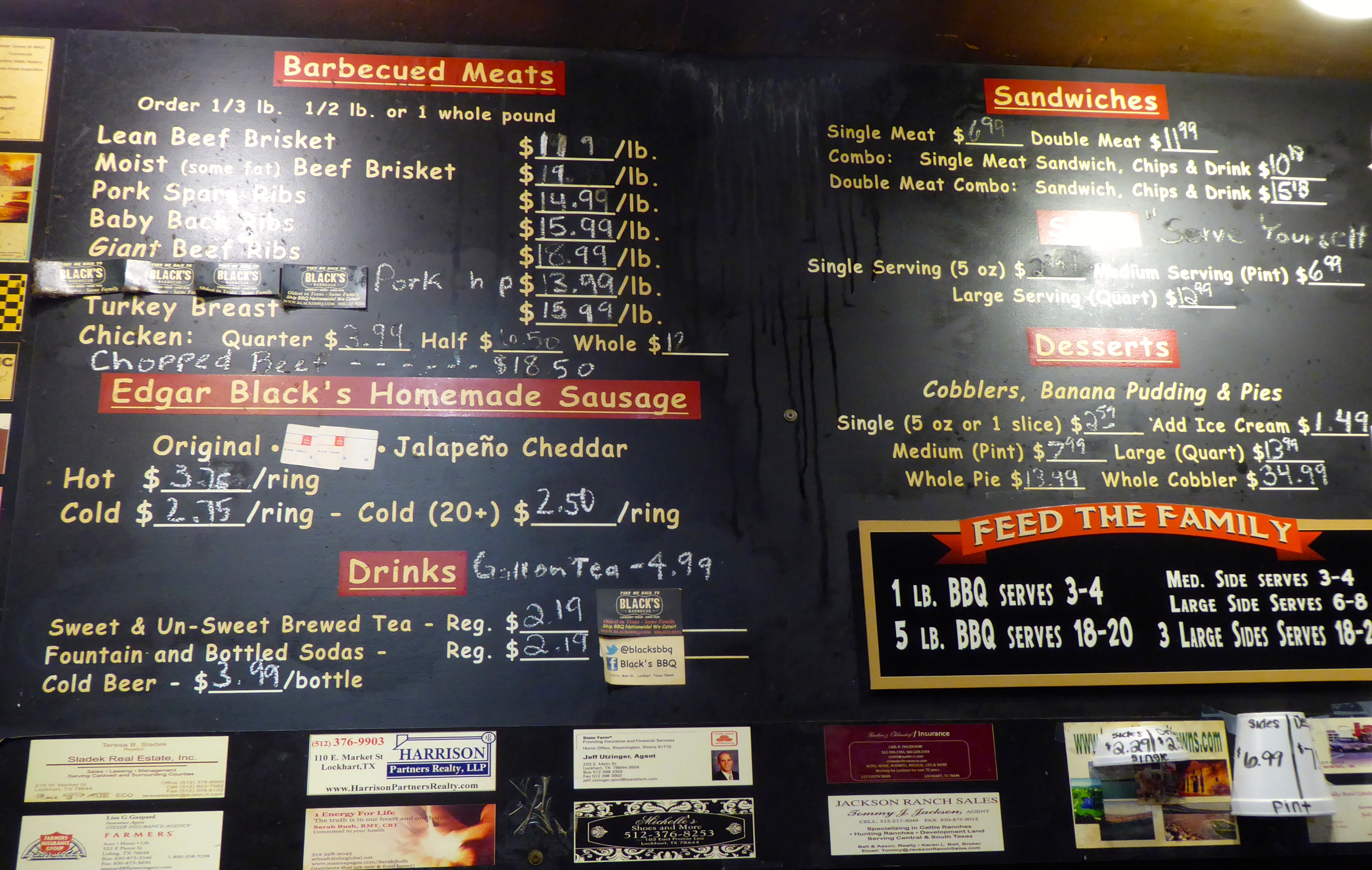 You start by ordering the sides (usually the meat order is first), and then go one-on-one with the Meat Man, who cuts and weighs your BBQ: 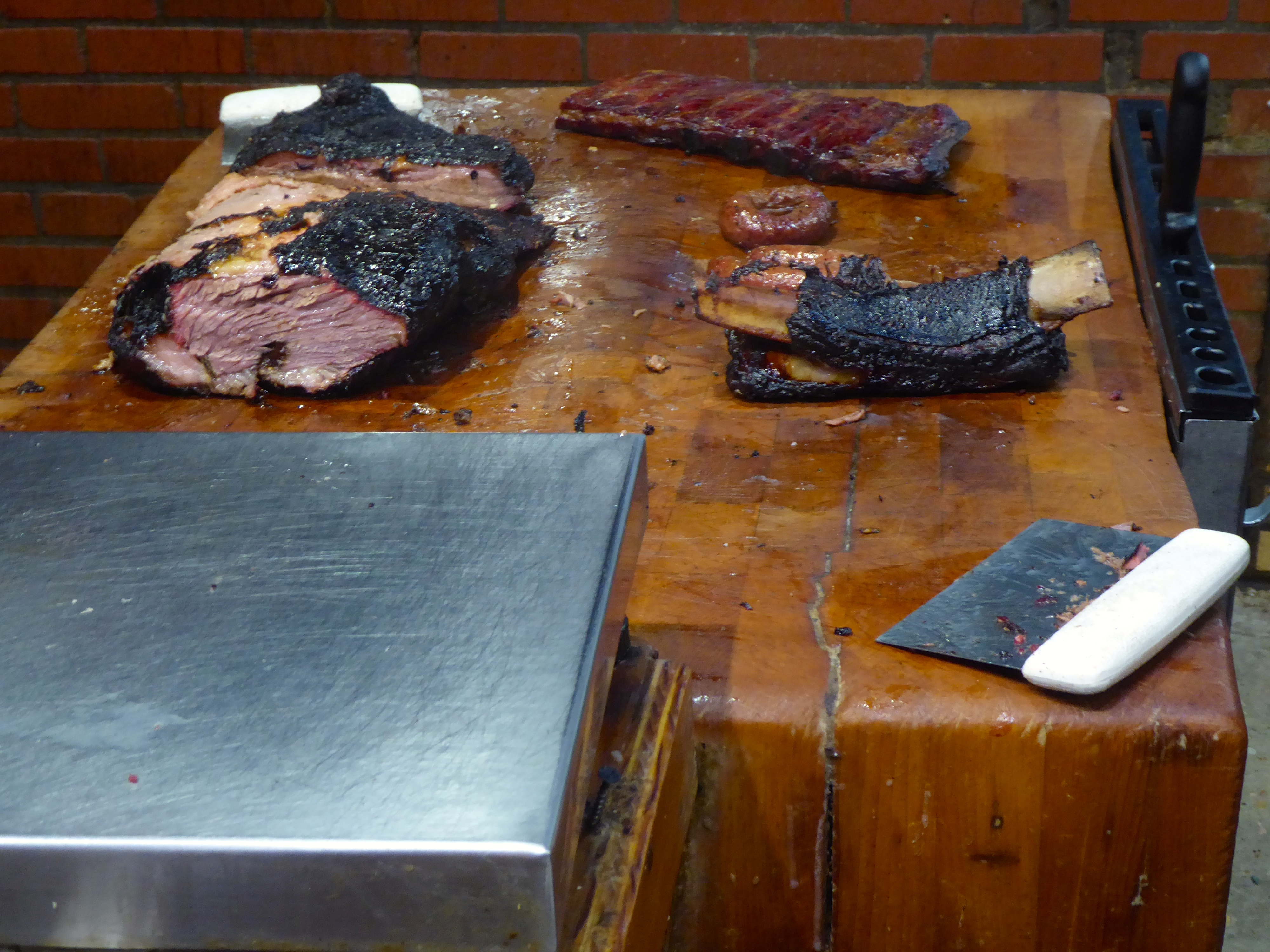 My plate: a giant beef rib with my usual sides: potato salad and pinto beans. There were also gratis onions and pickles, and I purchased one of their homemade jalapeño corn muffins. I got a small container of sauce, but used it for only one dip. Texas BBQ is invariably degraded by sauce—except at the City Market in Luling, which makes a magic elixir that really enhances the meat. 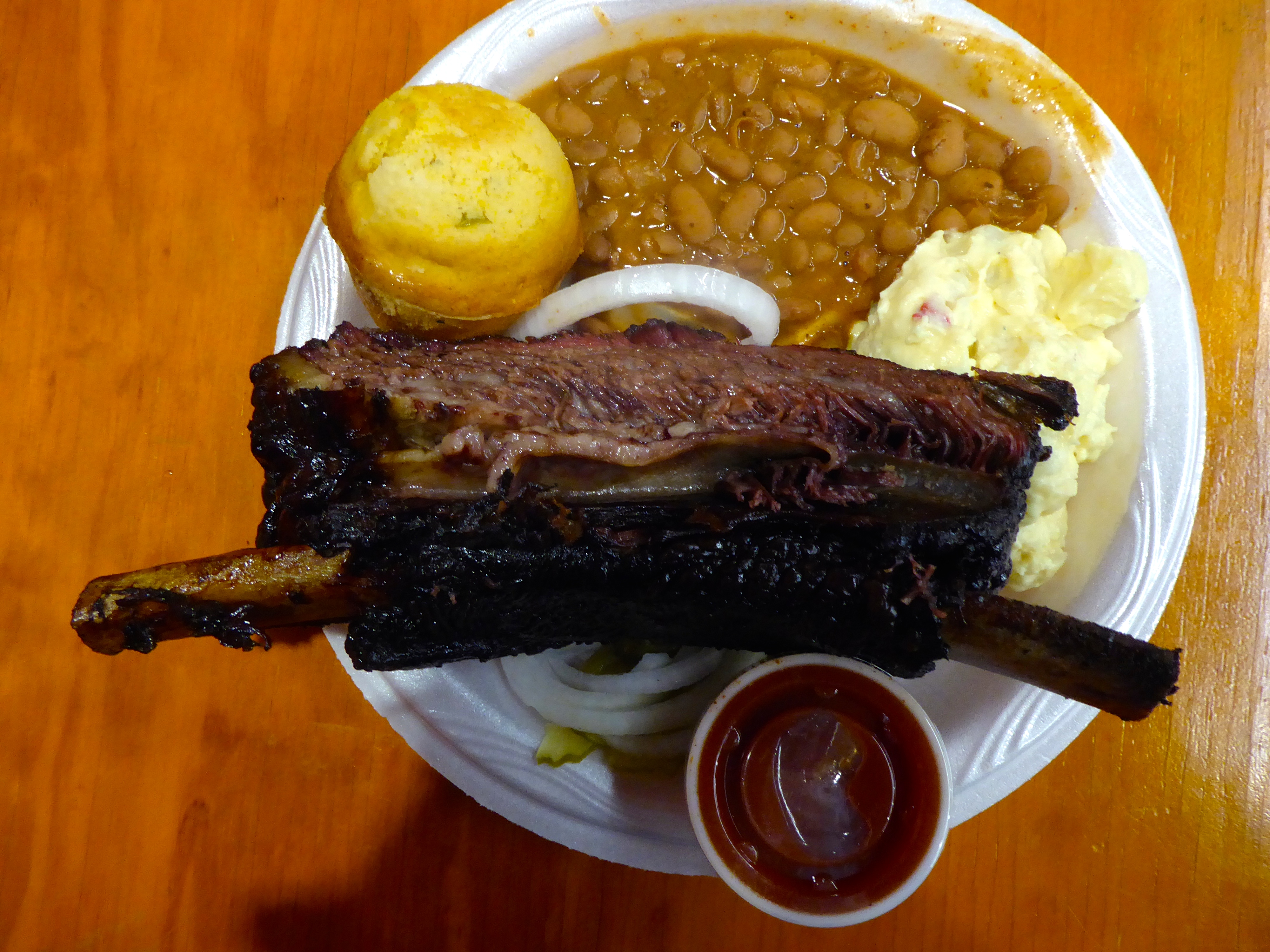 That rib weighed well over a pound, but I was hungry. Here’s a side view with my finger for scale. It’s like a huge gob of brisket on a stick! 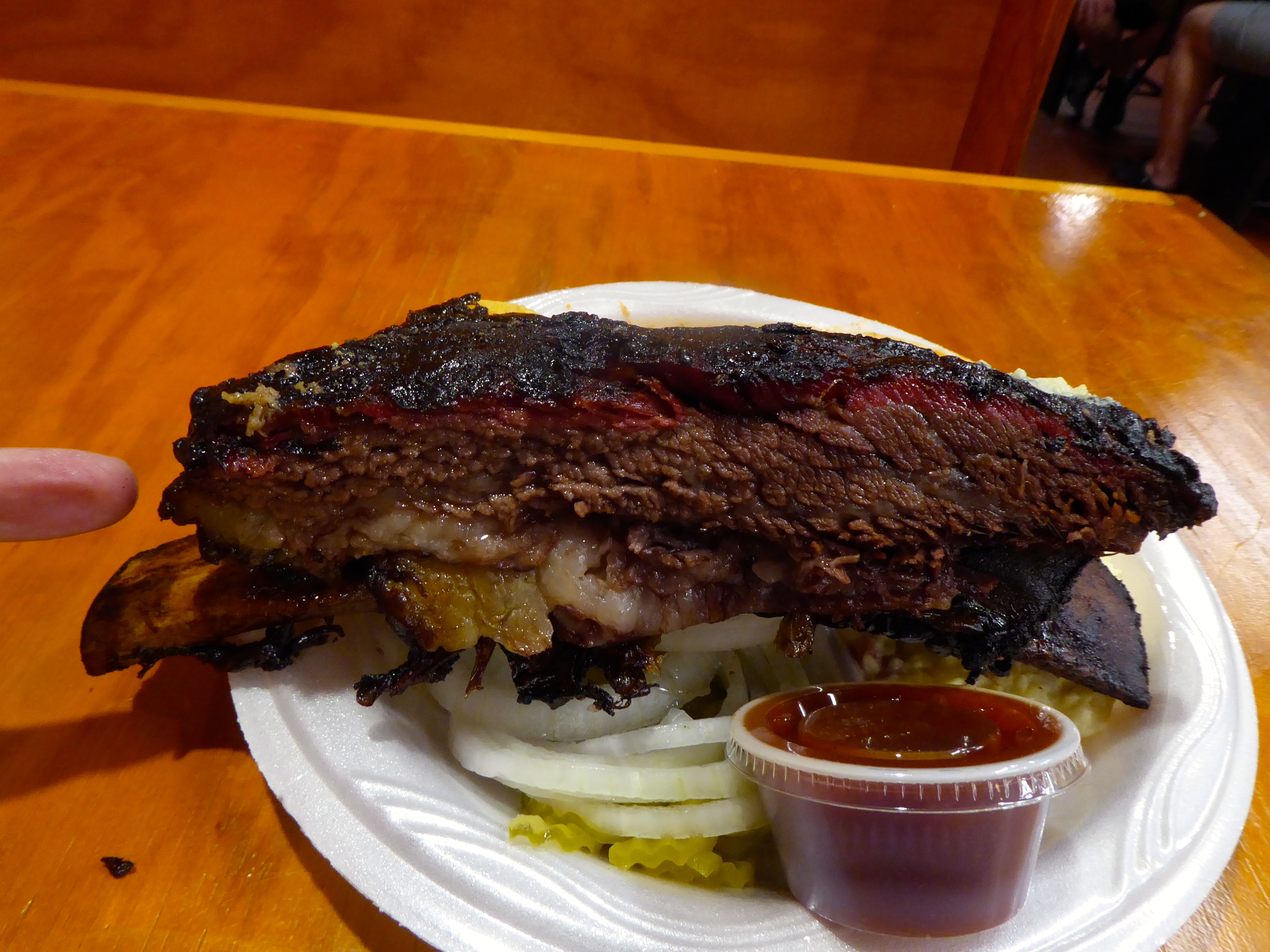 And praise me, people, for I ate well and finished the entire plate except for some big pieces of fat on the rib: 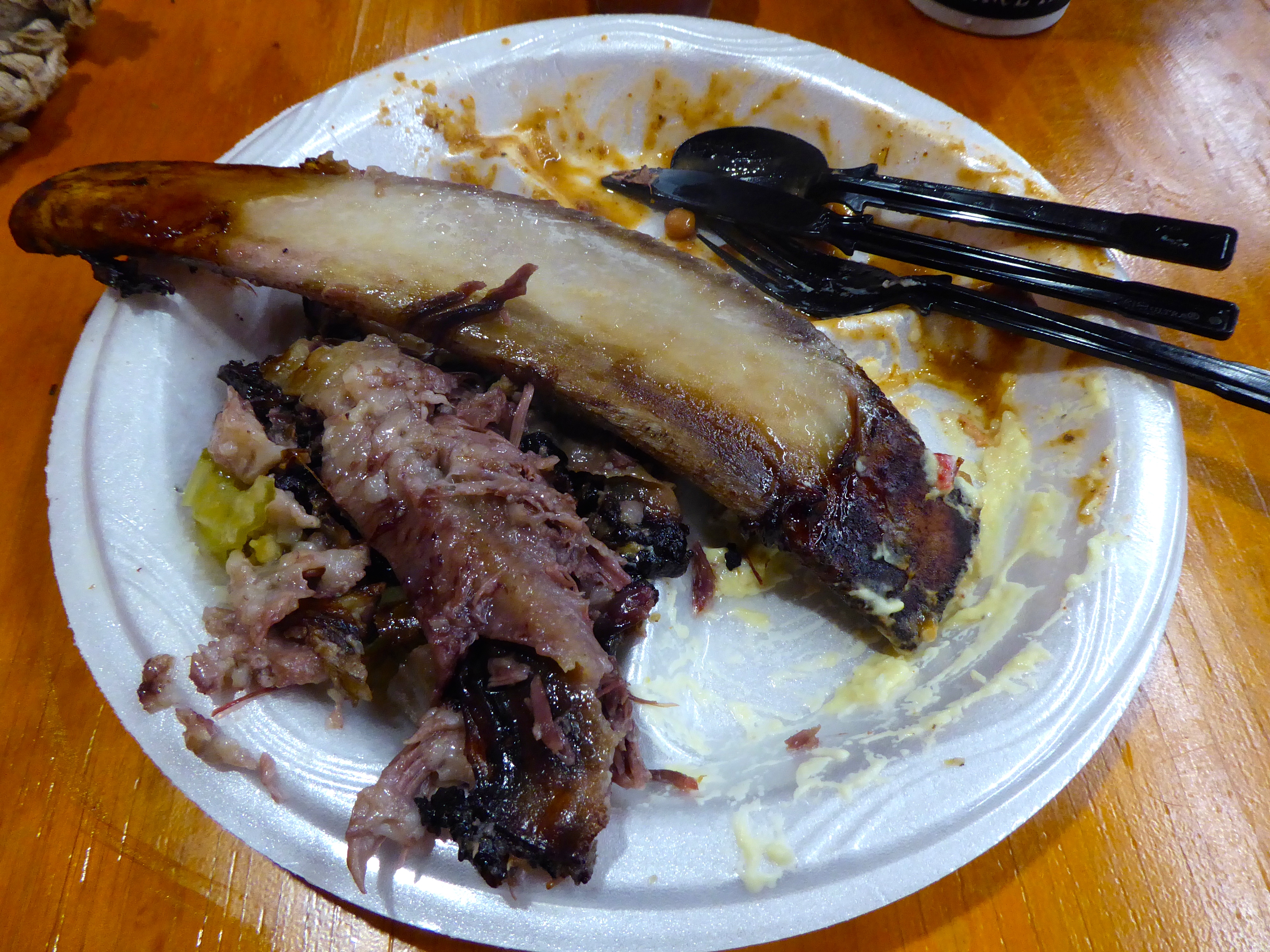 And that, ladies and gentlemen, brothers and sisters, comrades and friends, concludes my BBQ tour of Texas. Here’s a list of my bests for foods (and remember, I had but one visit to every place but Black’s):

Best coleslaw: Louis Mueller, Taylor (it was really fresh and had some spice to it)

Best chicken-fried steak: (not this trip, but overall): Hoover’s, Austin

Remember: this represents only ten days of eating. Texas is big and there must be thousands of BBQ joints here. I have not yet begun to eat.

36 thoughts on “Texas, Day 10: Lagrange to Austin via Lockhart”