These are lazy days, as the driving distances of my planned itinerary are short—at most three hours per day—there isn’t a lot to see in these small towns, and the day’s main event is usually a meal.

But this down time is good for me, as I’m getting a lot more sleep (a full 8 hours instead of 5 or 6) and am more relaxed, as I always am when I travel. I read a lot and move slowly, knowing that when I return to Chicago there will be work to do on top of Duck Hell: the near-simultaneous breeding (again) of Dorothy and Honey.

But best not to think of that now. Yesterday I woke up around 6 a.m. in Georgetown (population 80,000 and growing fast), got some coffee and ate half of my last mini-pie from the Texas Pie company. This one was pecan, and it was great. The crust was still firm and flaky after four days. I didn’t want to eat the whole thing because I planned a late breakfast at the Monument Cafe, a well known local restaurant with a roster of great homemade foods. That includes the pies, two of which—the coconut cream and chocolate pie with a pecan crust—are famous.

I decided to eat breakfast at 10 a.m. so it would segue into lunch, assuring me that pie would be available. Although I planned to finish up breakfast with the chocolate pie, I was too full for that (and truly, pie after breakfast is a bit weird), and so I got pie to go.

The pre-breakfast mini-pie (I ate half): 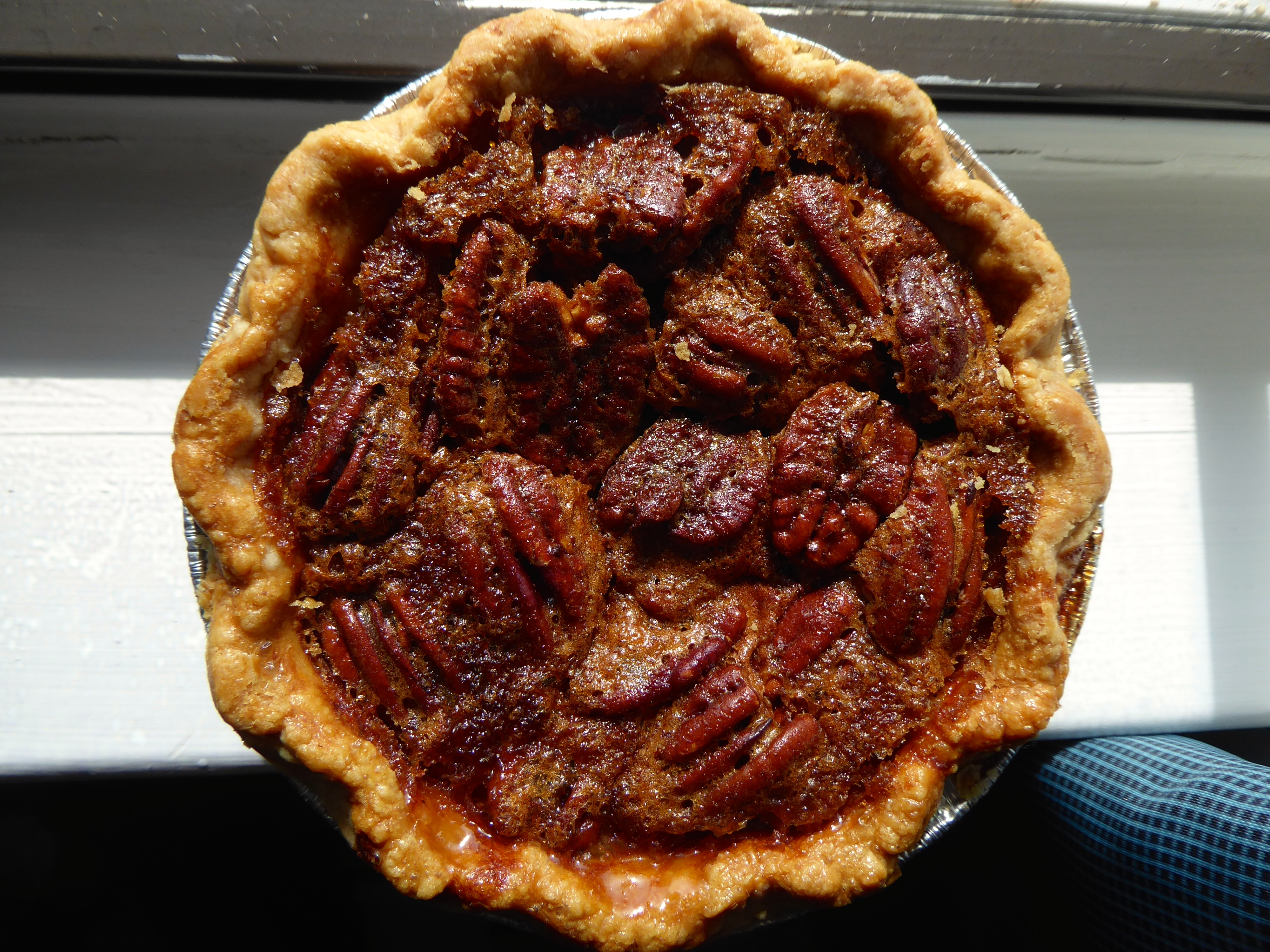 The Monument Cafe in Georgetown. You can read Jane and Michael Stern’s laudatory review here. 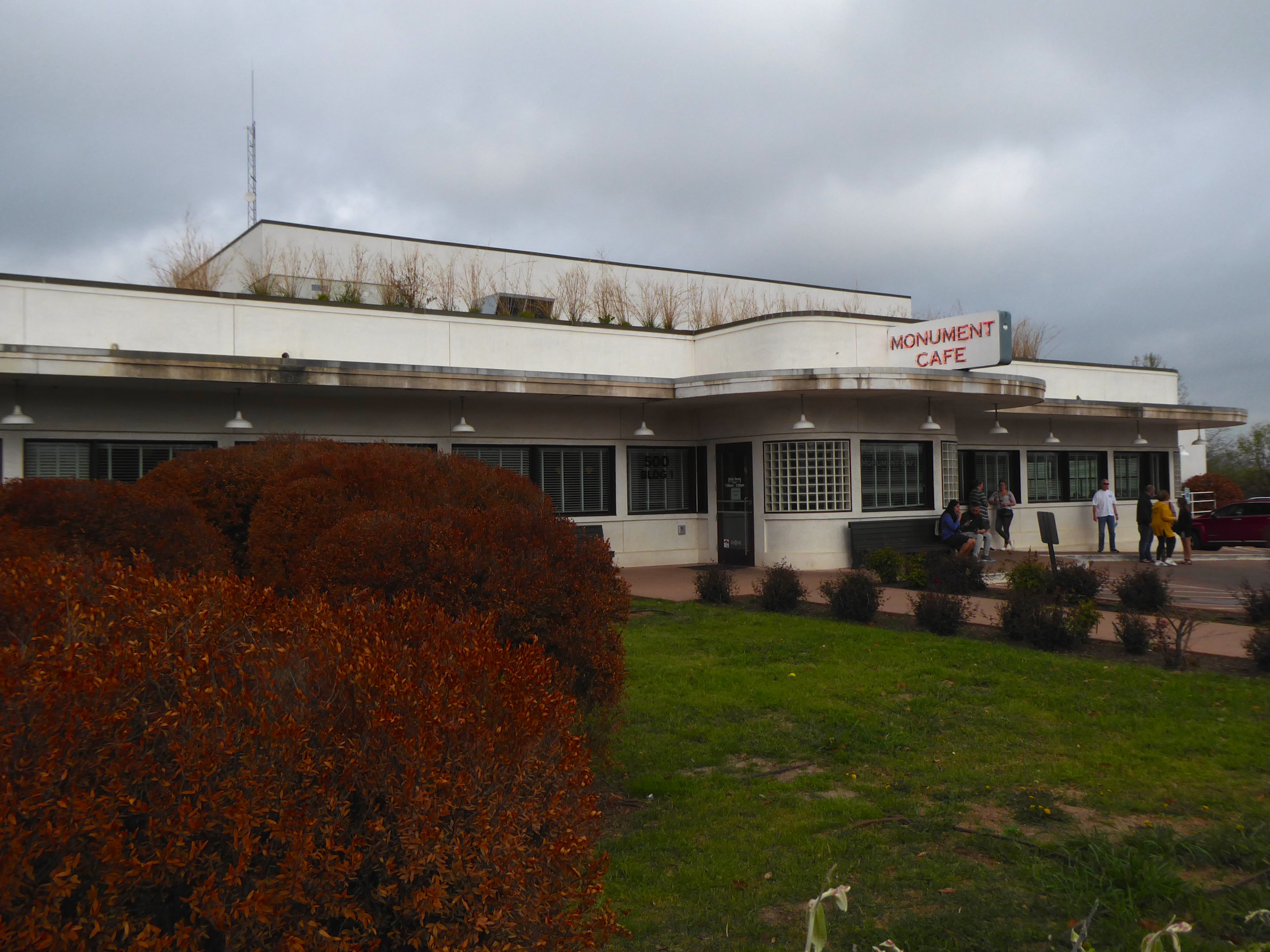 Even at 10 a.m. there was a 20-minute wait, so I used my time to walk around the grounds, which were teeming with great-tailed grackles (Quiscalus mexicanus). It’s breeding and nesting season here, and the males are displaying to each other constantly, waving their heads, wagging their tails, and making a variety of sounds.

They’re handsome birds, especially the iridescent males. (The females are brown and not as striking.) 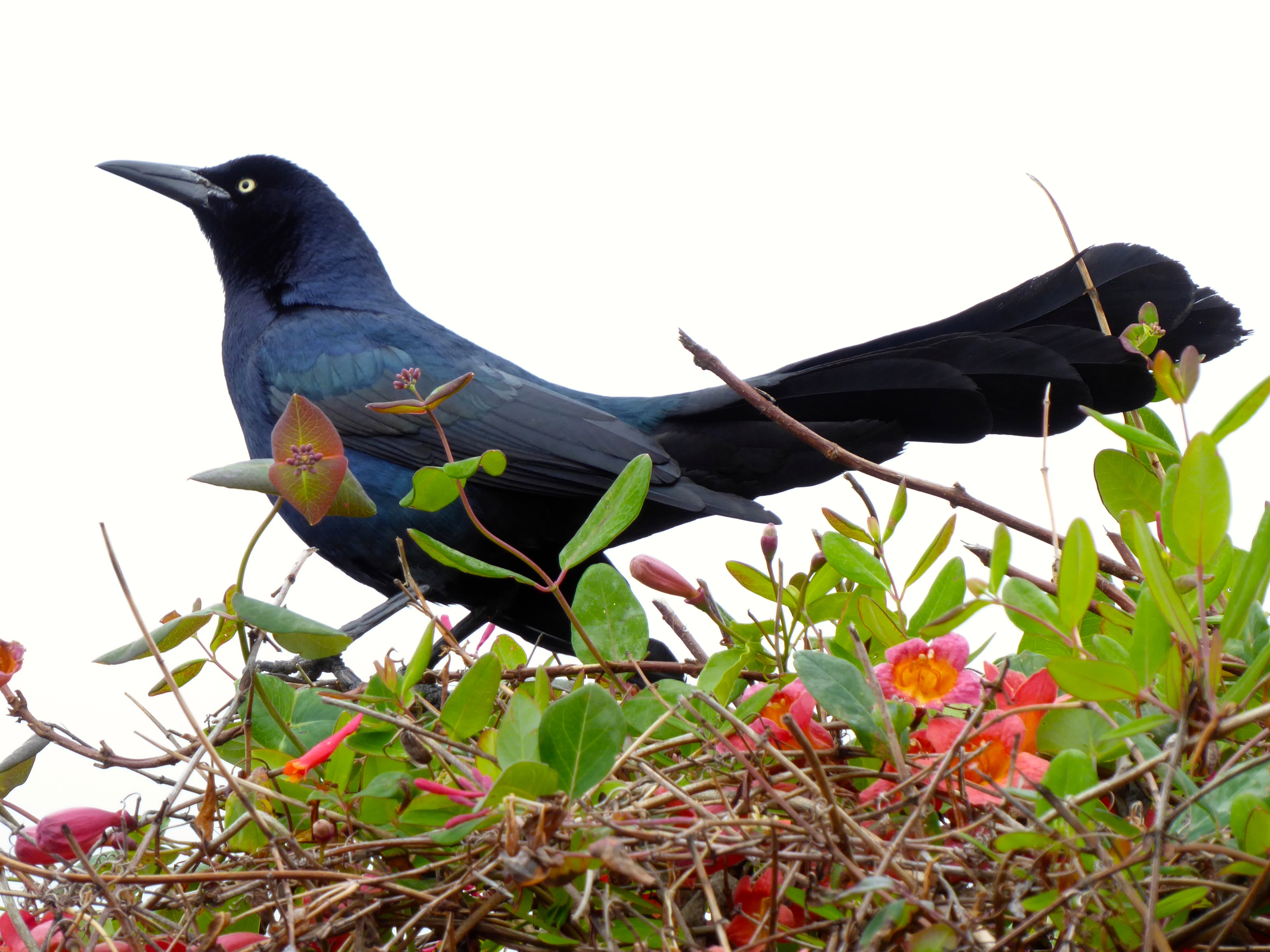 Here are two and then three males displaying to each other.

I was called in for my table and presented with the menu. I’d already decided to have their “famous migas”, described by Jane and Michael Stern this way:

One hot breakfast unique to the region is migas, Mexican scrambled eggs that include melted cheese, chunks of tomato, and small ribbons of crisp tortilla that soften in places but stay crunchy in others. [JAC: there’s also jalapeño peppers.] On the side of migas, you get red salsa to heat it up along with grits or hash browns and a soft flour tortilla rolled in aluminum foil so it stays warm.

You also get bacon and refried beans. 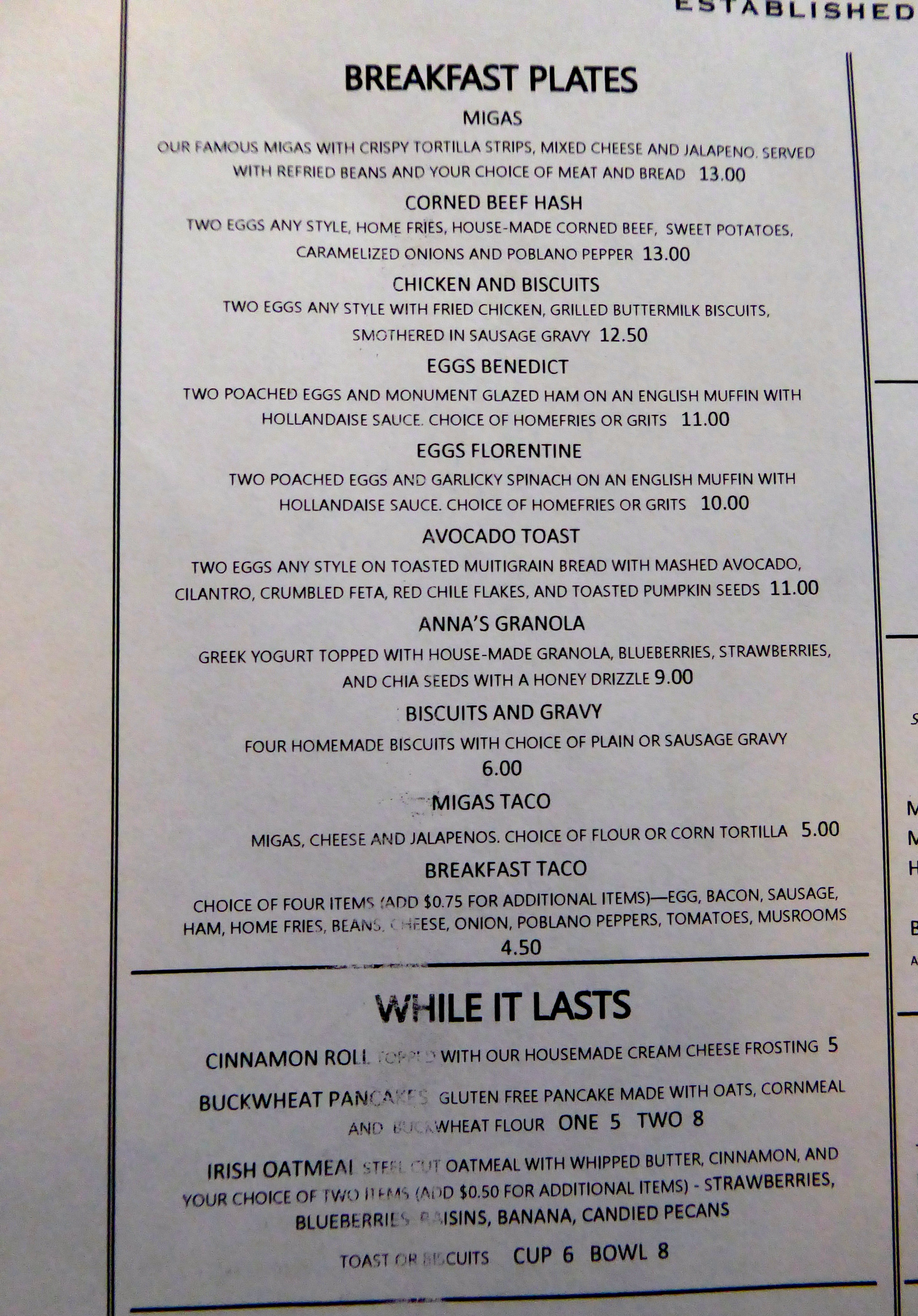 My breakfast plate. This was fantastic, especially with the salsa spread over the migas. I used the tortillas to eat the refried beans and delicious bacon. I can’t imagine a more satisfying breakfast! I would love to try all the home-cooked dishes this place offers. (Open only for breakfast and lunch.) 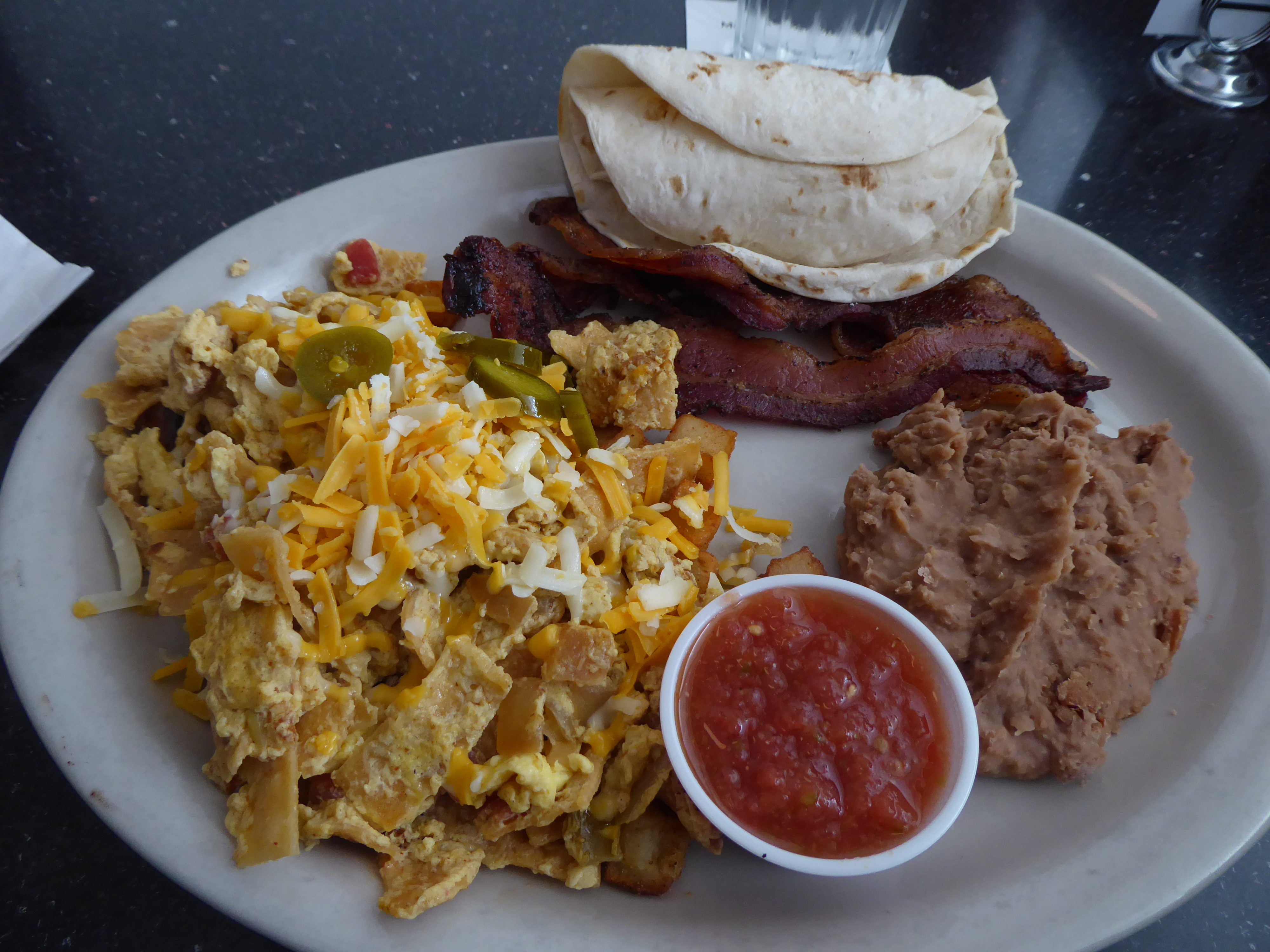 My piece of chocolate pecan pie to go, with a heavy layer of pure whipped cream on top. You can’t see the crumbled pecans that serve as the crust, but I’ve put a picture of the pie from Roadfood below my own photo. 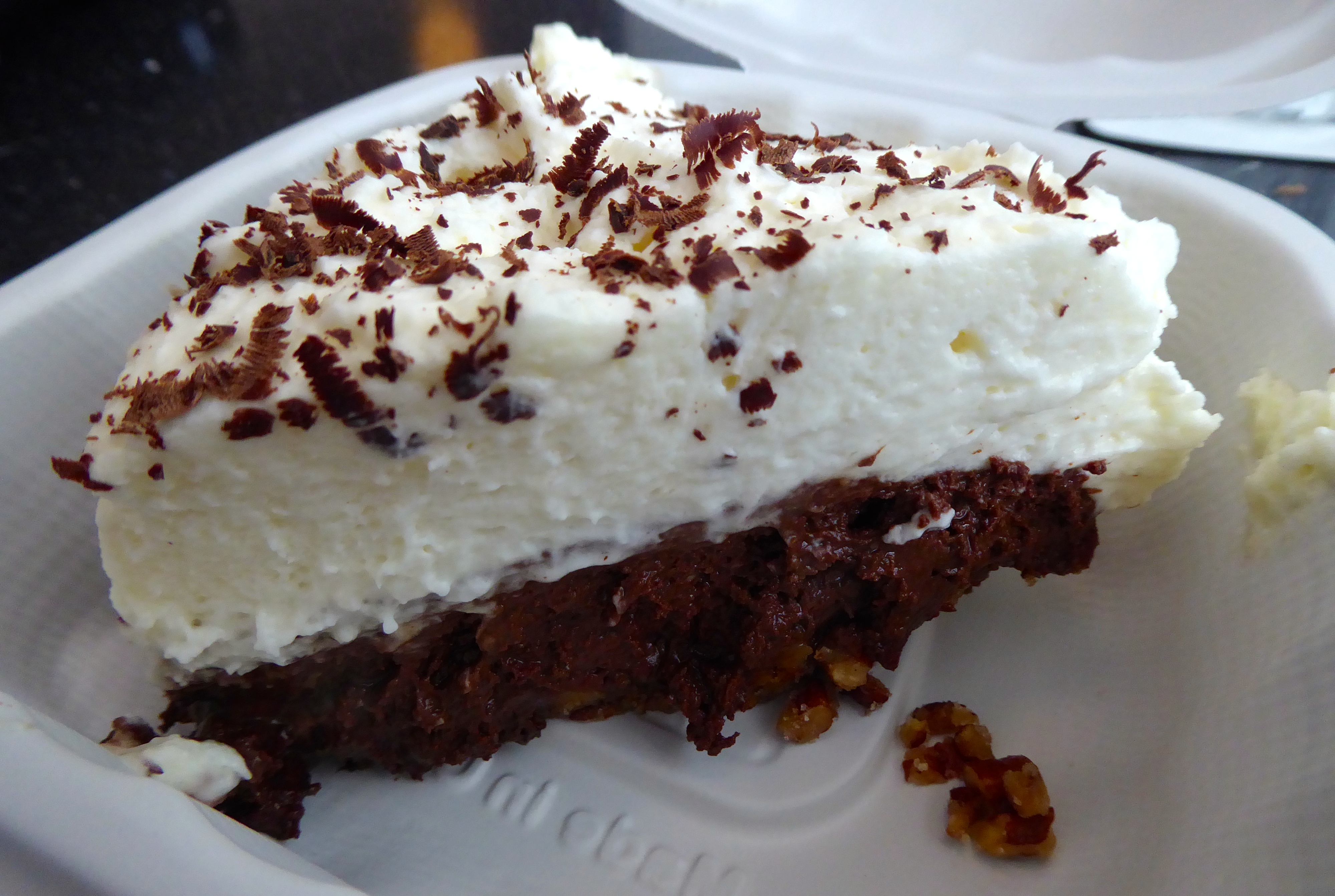 Photo below from Roadfood. Truly, this may be the best piece of pie I’ve ever had. See the crust of candied pecans? It was like eating the most delicious chocolate cream pie atop a pecan pie! 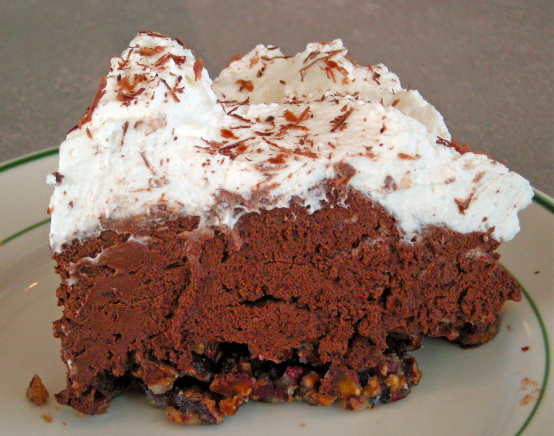 After breakfast I explored the town a bit. Like many small Texas towns, it’s built around a central square with the county courthouse (in this case the Williamson County Courthouse), the grandest building in town. Small streets lined with local shops encircle (ensquare?) the courthouse. 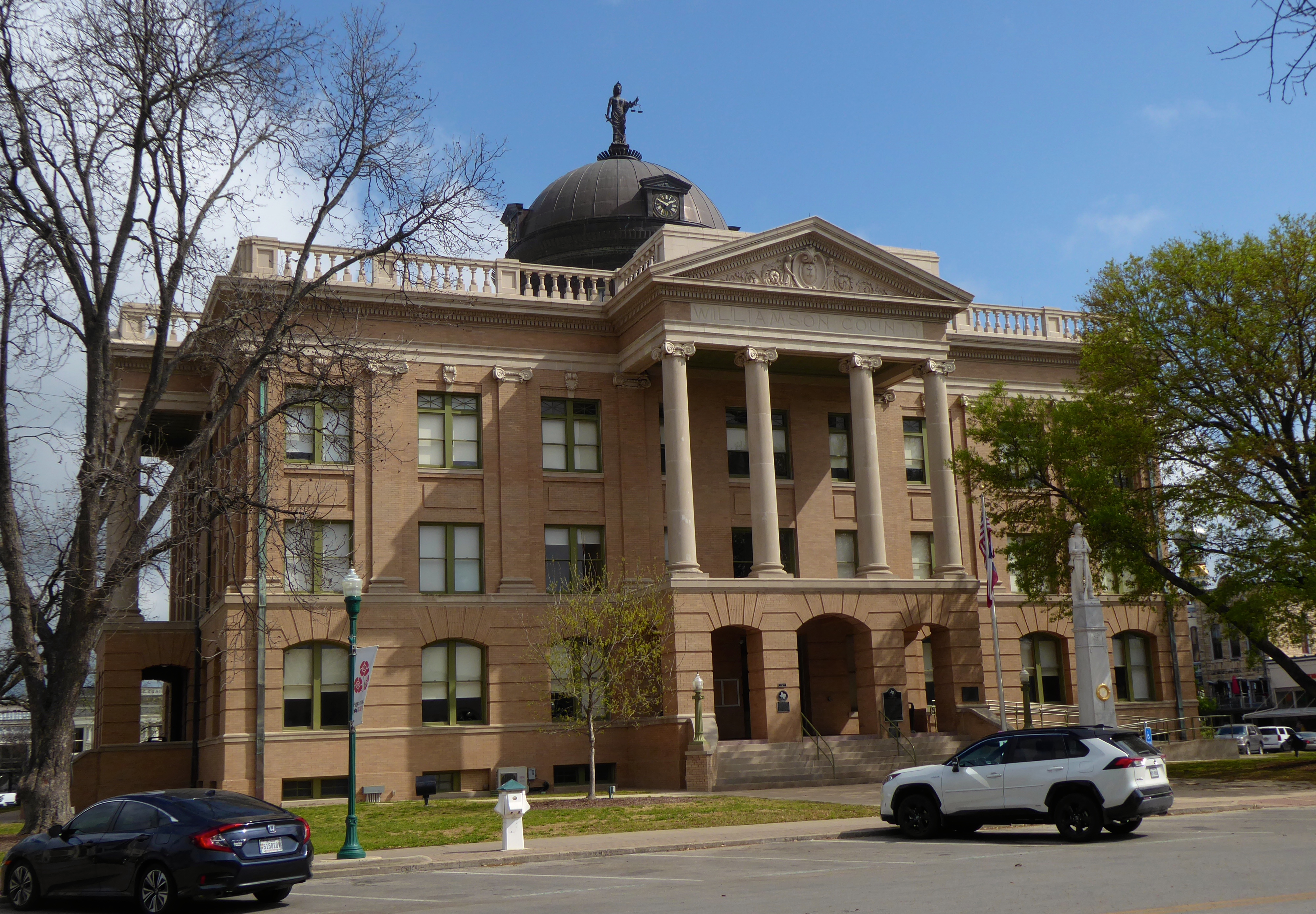 Some of the old buildings east of the courthouse square.  A bit from Wikipedia:

The city was recently named one of the best places to purchase a historic house. Today, Georgetown is home to one of the best preserved Victorian and pre-WW1 downtown historic districts, with the Beaux-Arts Williamson County Courthouse (1911) as its centerpiece. Due to its successful preservation efforts, Georgetown was named a national Main Street City in 1997, the first Texas city so designated. 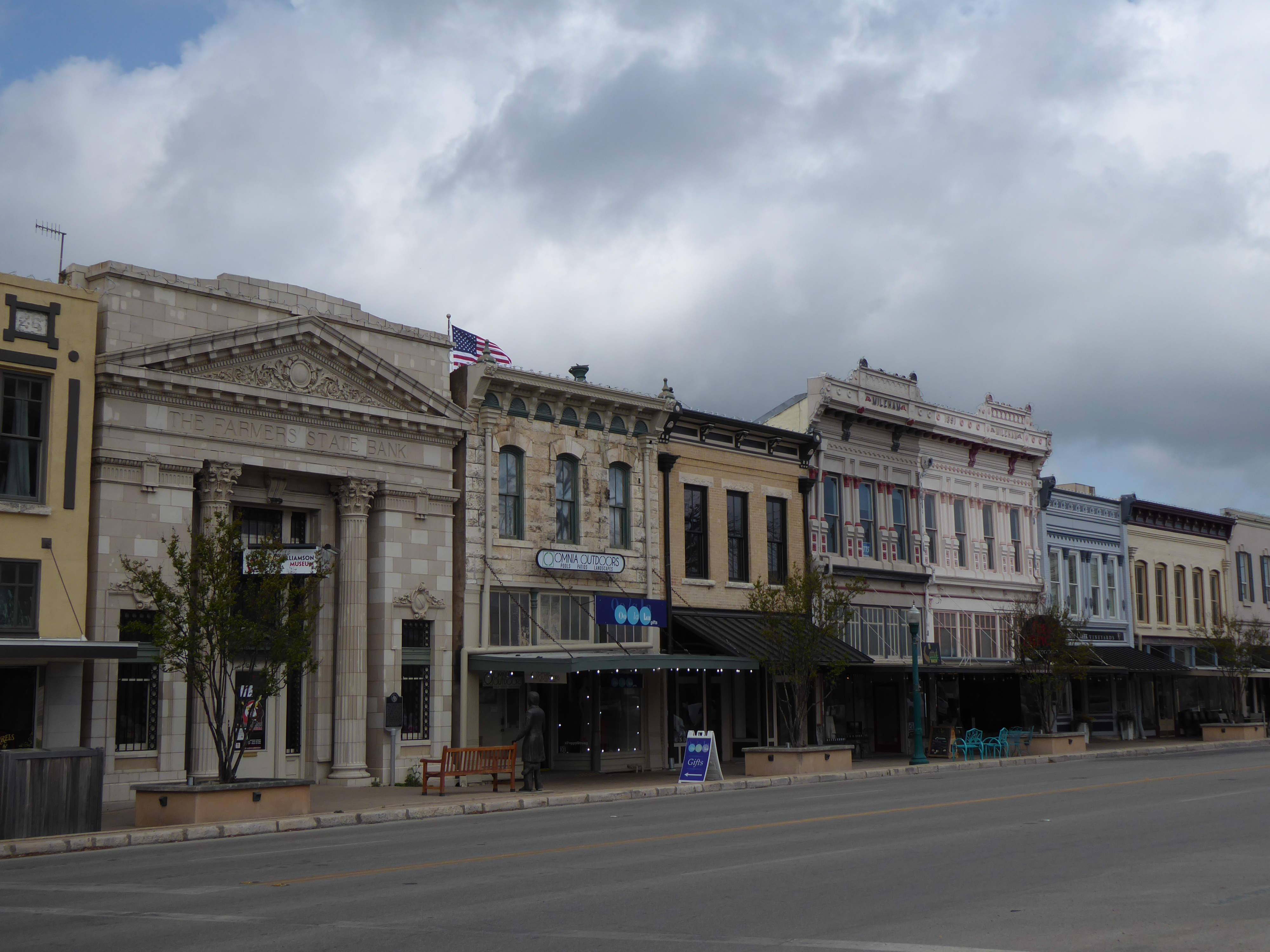 See also the long list of movies filmed in Georgetown. 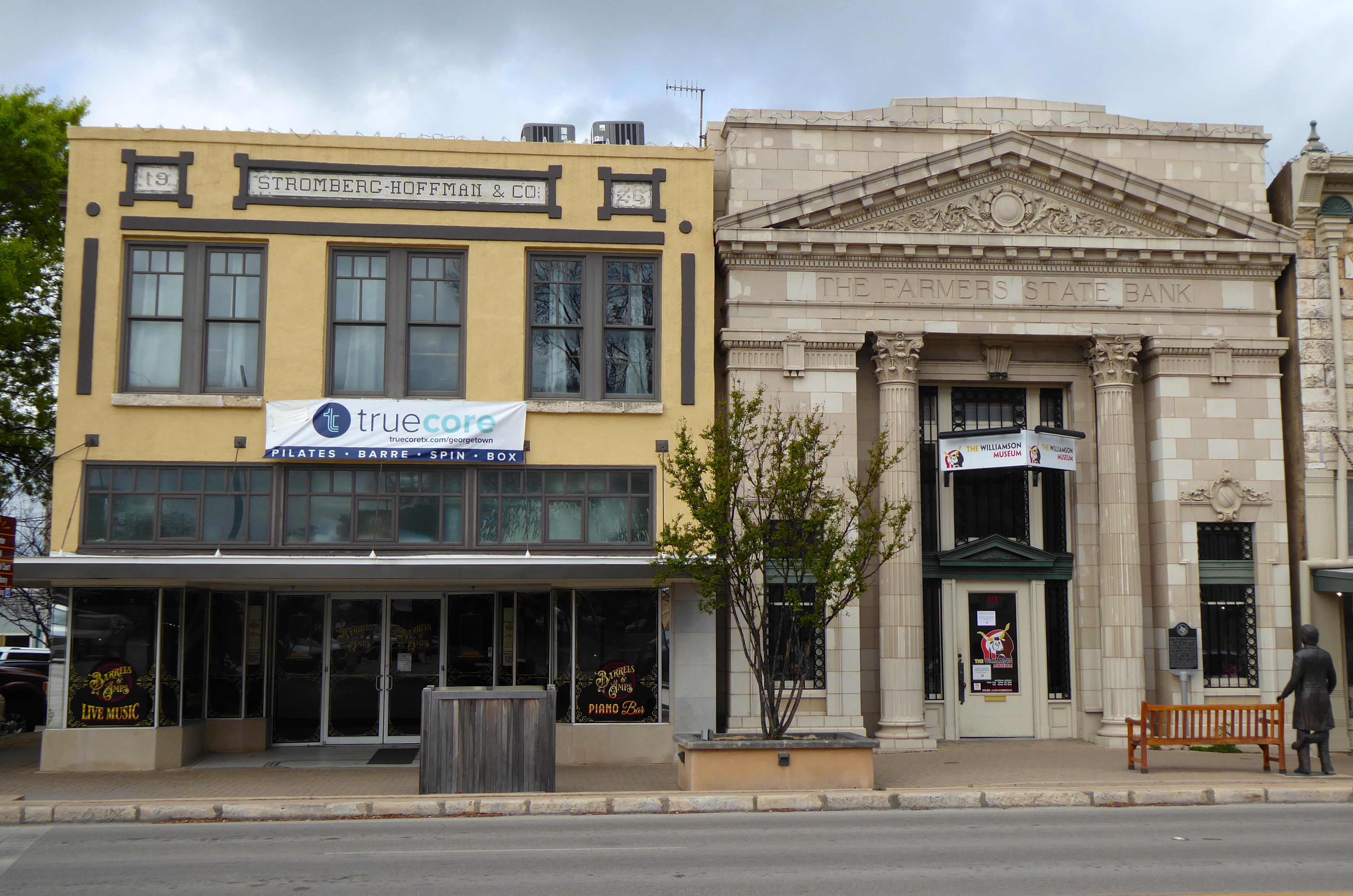 The picture show (closed, of course). 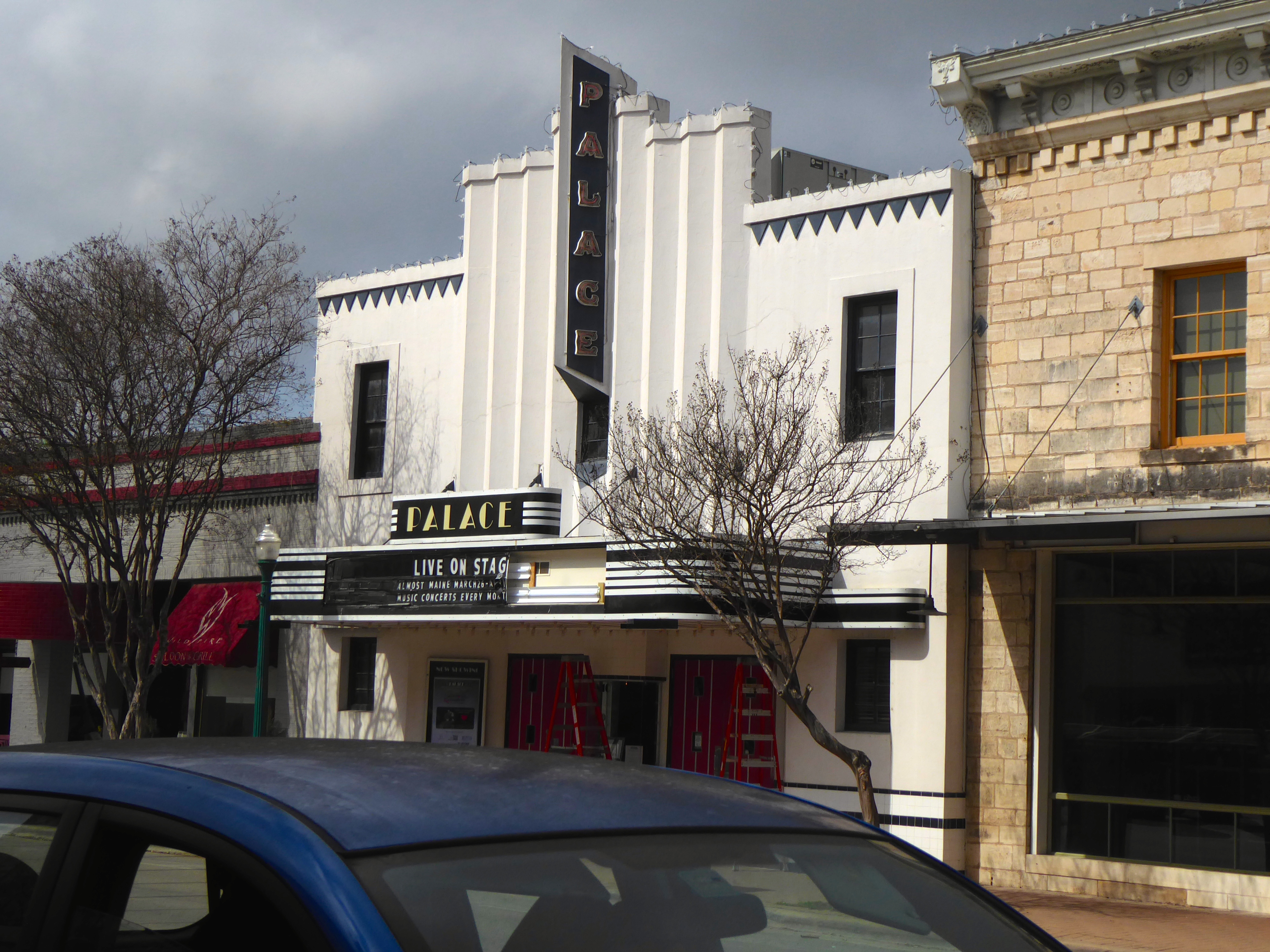 Then I made 1.5 hour drive to Lagrange (population ca. 4,600), where I discovered that the two restaurants where I planned to eat will be closed today and tomorrow. I’ll have to scrounge for meals.

On Wednesday I’ll drive to the airport, stopping at either Lockhart or Elgin on the way to have The Last BBQ Supper. And on Thursday it’s back to Chicago—and an abstemious couple of weeks. No meat!

Truth be told, though, I don’t think I’ve gained any weight on this trip, at least judging by the fit of my pants. I eat only one meal a day, although I do have a piece of pie as well.