I can’t resist a challenge when it comes to good food. So when no fewer than three readers told me that I had to eat at Cooper’s BBQ in Llano because it was better than all the places I’d eaten before, well, I simply had to make the one-hour drive to Llano to test that assertion. (The town, by the way, is pronounced “Lah-no”, not the Spanish pronounciation “Yah-no”.)

It turns out that Cooper’s is a very good pit, though they smoke over mesquite charcoal rather than wood, but on my one visit there was an uneven note in the form of mediocre brisket (verified by another visitor). I can’t rank it up there with the City Market or Louie Mueller, but it’s certainly worth a visit if you avoid the brisket.

Here’s the place: pretty much of a ramshackle dive, as all good BBQ places are. 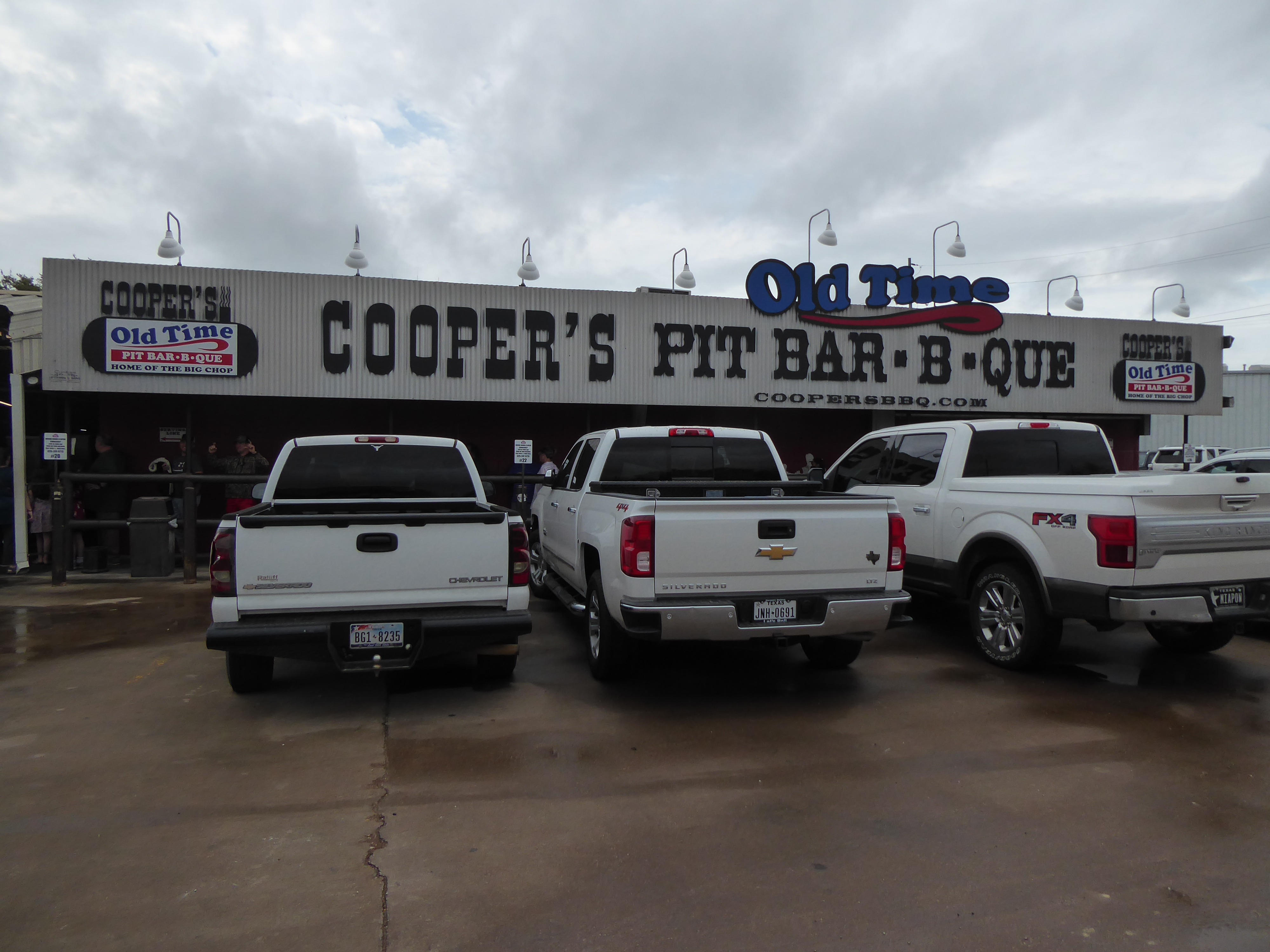 The ordering system is unique: you enter by the grill, with every smoked meat on display for your inspection, along with a price list. You simply tell them what you want (see the menu below). It’s easy to overorder this way, and of course I did it. But I did eat everything.

The menu lists sixteen items. The most famous item at Cooper’s is their giant smoked pork chop, so I had to have that. But I had to try some brisket, too—to compare with the other places I’ve eaten. And one reader said I should have the BBQ goat, and since I love goat, and have never seen it in a Texas BBQ, well, I had to have the goat as well.

The display of smoked animal flesh: 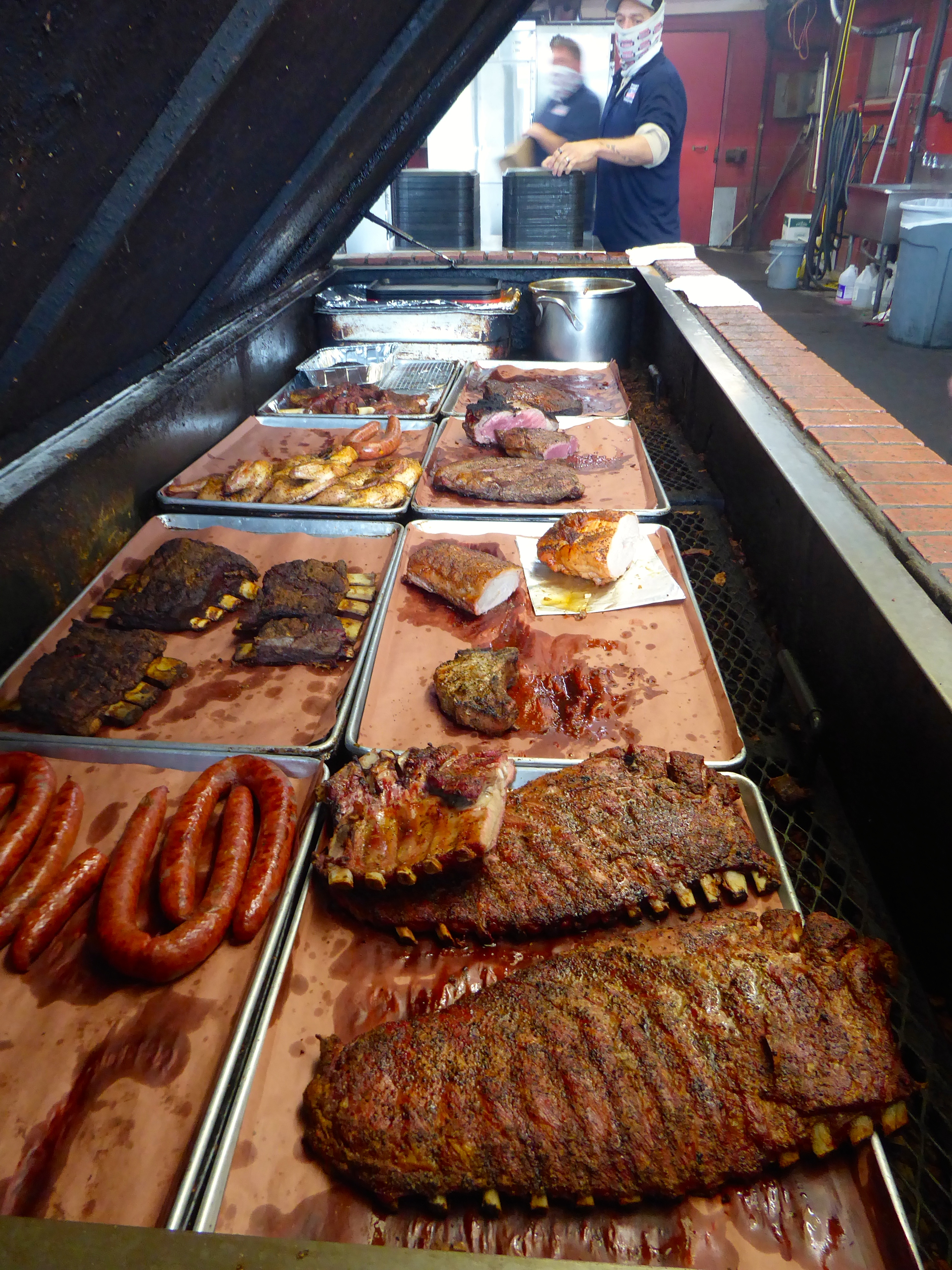 These are the per pound prices, I believe. The half chicken, which I didn’t get, is a bargain at $8. 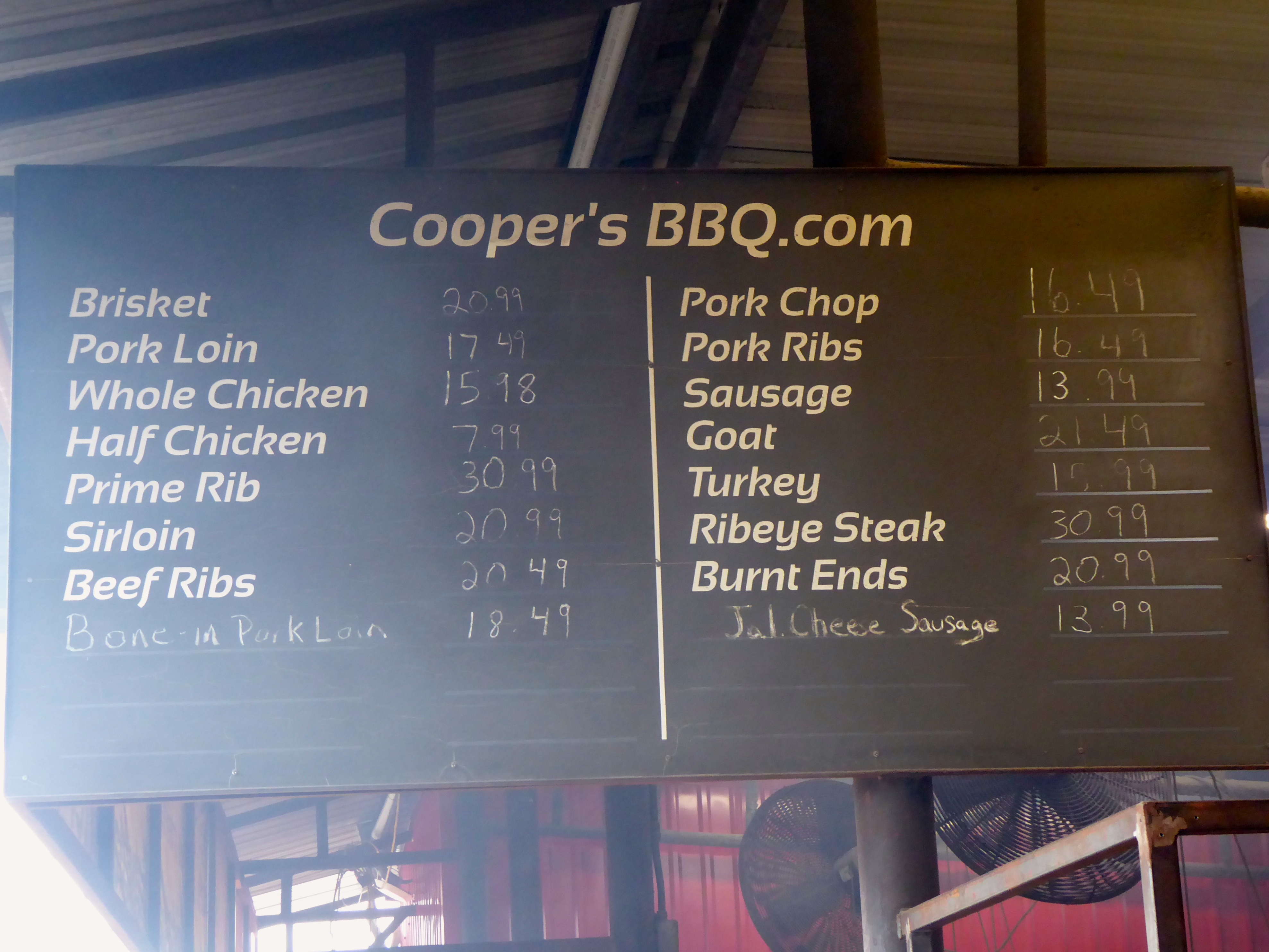 Below: the inside, with deer heads. Llano (population about 3,500) is known as “The Deer Capital of Texas”; as Wikipedia notes:

The density of deer in the Llano Basin is the highest in the nation. Hunters from all over come to Llano for deer, quail, dove, feral pig, and turkey hunting, using guns as well as bow hunting.

The whole town is full of taxidermists who will dress your deer (cut it up for meat) and also stuff and mount the head, as in the restaurant below. There are also tons of gun stores, many with signs making fun of gun control and its advocates.

The dining room. It’s smoky in there as the pits are right outside.You sit on benches, which makes it easy to talk to the locals 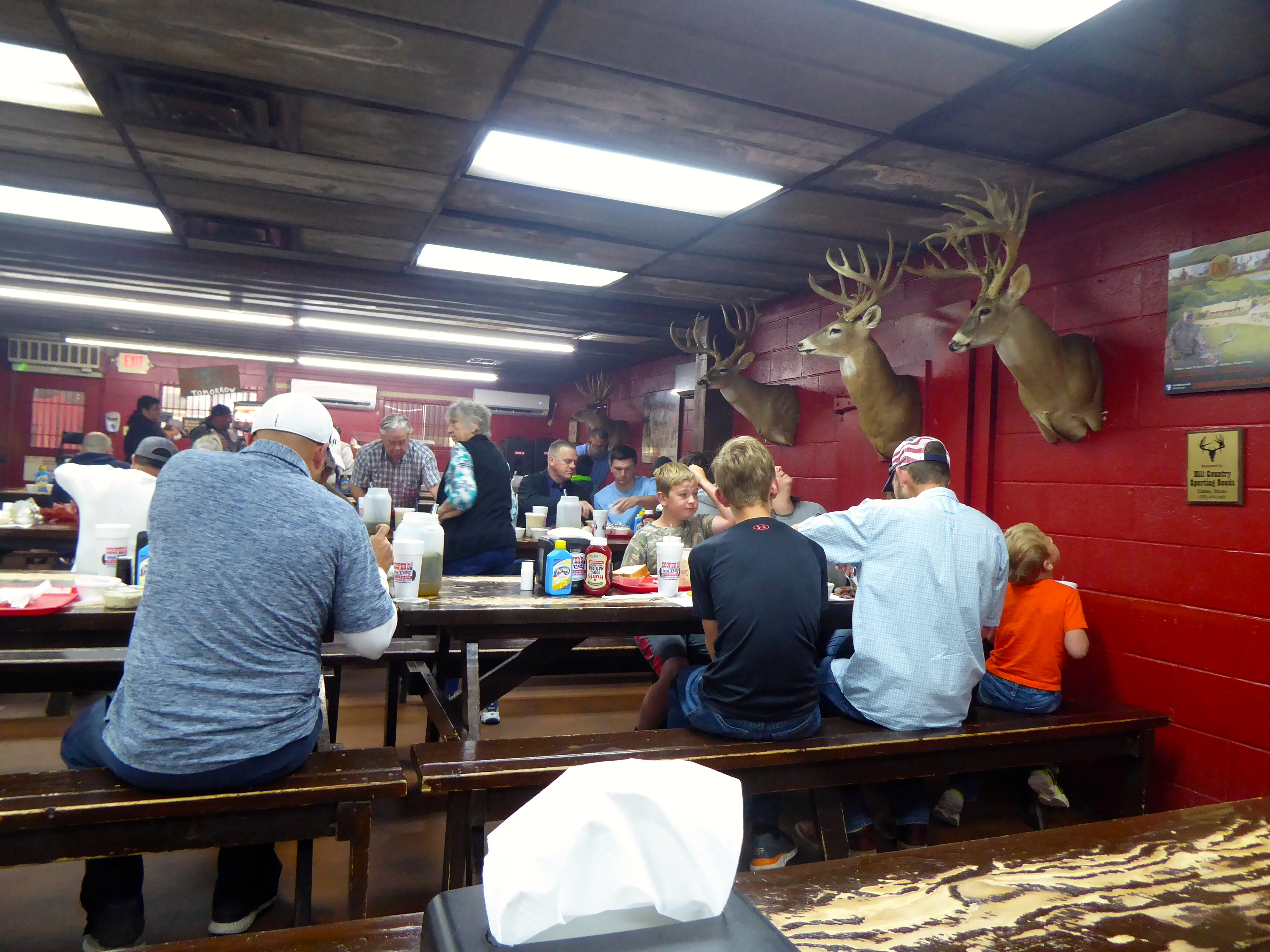 After you order at the pit, they place your meat smack on a plastic tray, which a guy then takes inside, wraps each piece in butcher paper, weighs, and calculates the price. Then you order sides (beans are free). The assortment of cobblers for dessert—blackberry, peach, and a fabulous looking pecan cobbler—was stunning, but I abstained because I still have a mini pecan pie from the Texas Pie Company.

My plate. Pinto beans with a jalapeño pepper, then the goat at upper right., the giant pork chop below it with a side of coleslaw, one slice of brisket (I asked for “juicy”) to its left, and two pieces of white bread. I also had sweet tea (I got half and half sweet and unsweetened). 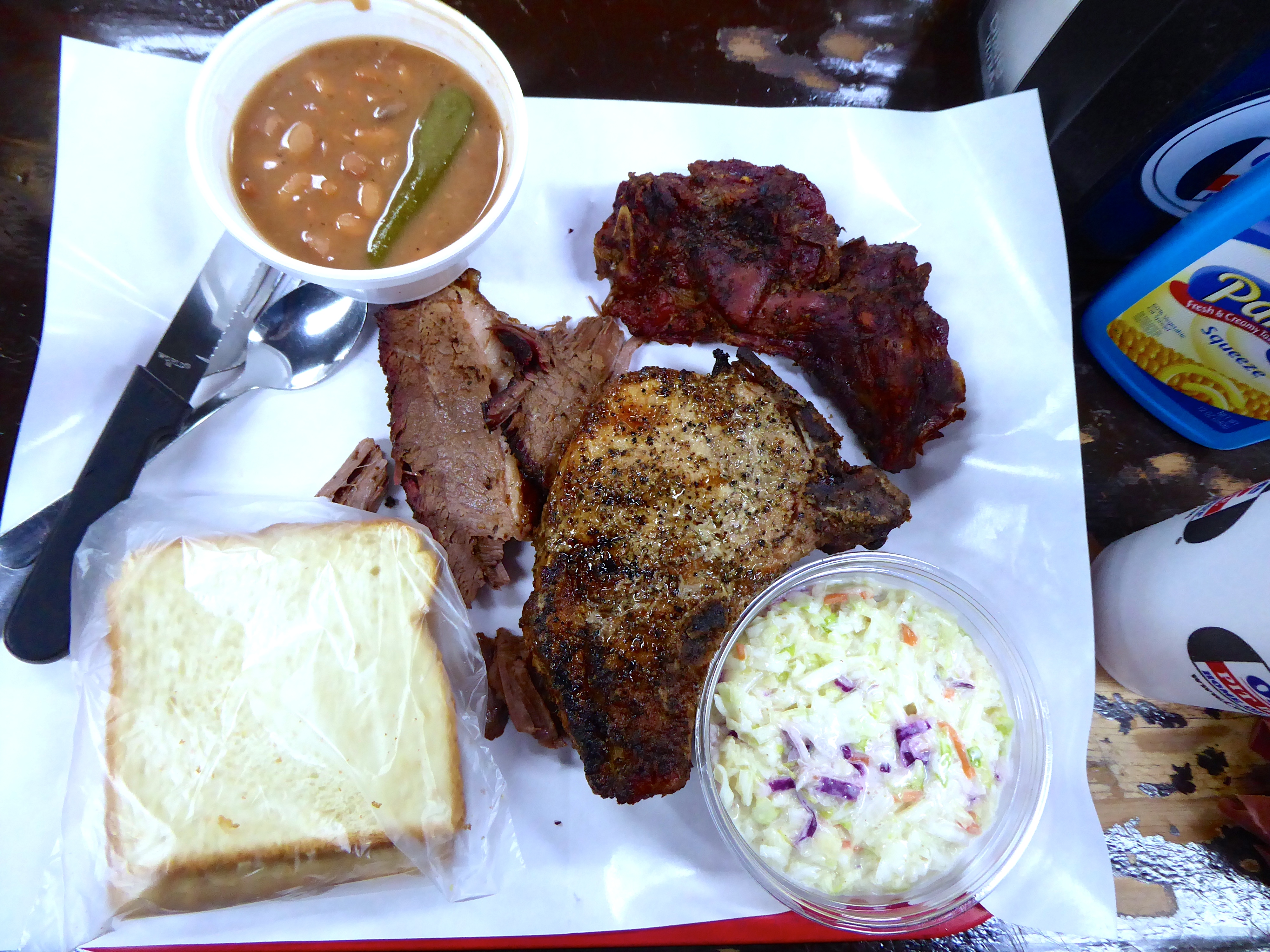 The meats. Verdict: The pork chop was fantastic: thick, smoky, juicy, and porky. It would have been a meal in itself! The goat was very good as well, though one has to carefully gnaw the meat off the jagged bone. The brisket, sadly, was dry and uninspired, even though I went at opening time (11 a.m.) and asked for a moist piece. Verdict: mixed. Go for the pork chop and maybe the ribs and sausages (I didn’t try them but see below), but I though the brisket sucked. I could, however, have had a bad piece. 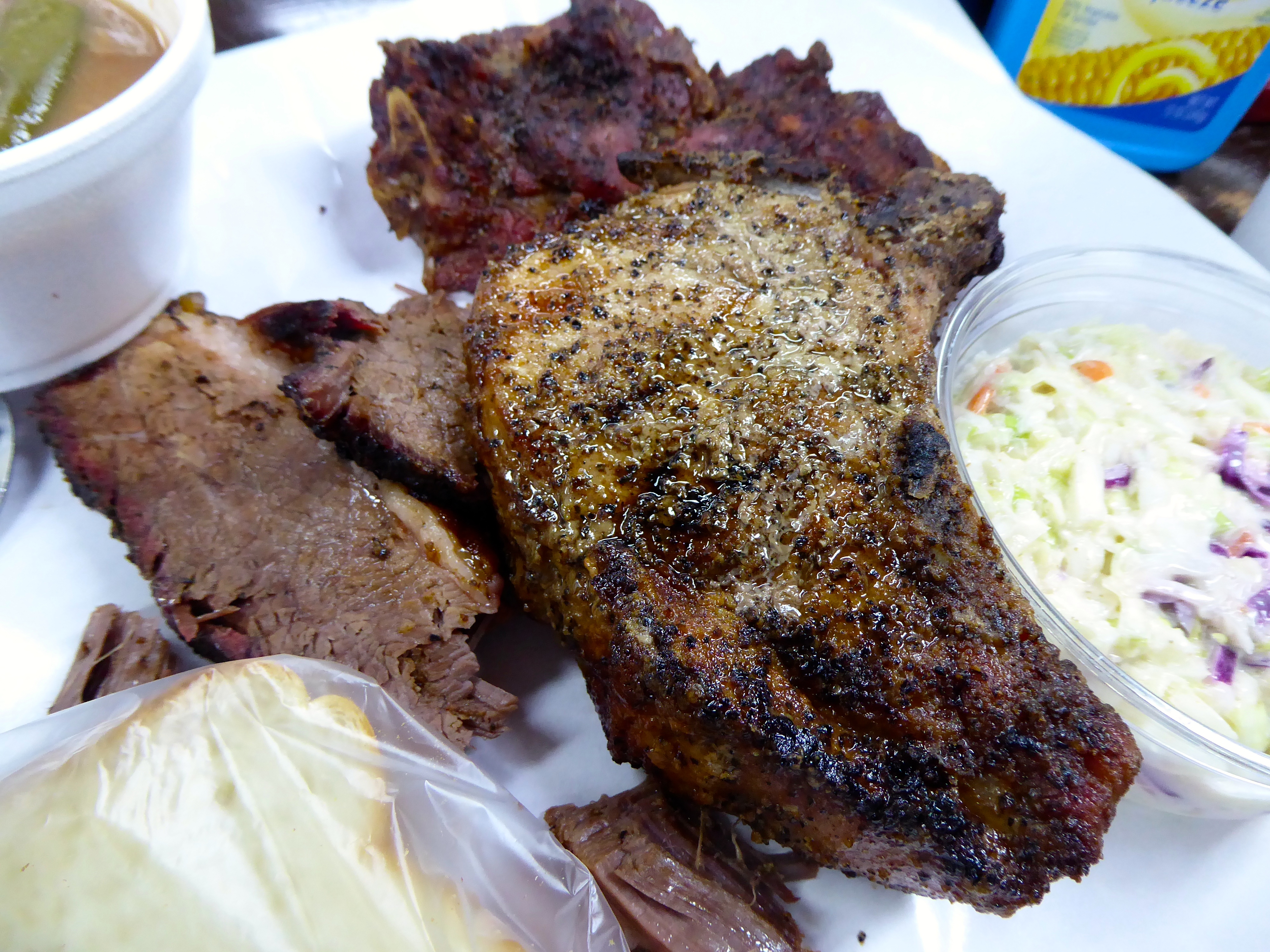 I struck up a conversation at the table with a nice couple who had driven four hours down from Dallas to eat BBQ on Easter and see the wildflowers. Usually the Texas hills around Llano are bedecked with colorful flowers at this time of year, but the rains were light this spring and the flowers few. There were lots of Indian paintbrush and bluebonnets along the highway, but the couple told me that in a good season the flower displays are stunning.

We chatted and ate for an hour, and I tell you what: that couple had a LOT OF STUFF. They planned to take much of it home to freeze (I’m told BBQ freezes well except for cooked sausage). And they had a couple quarts of coleslaw and potato salad, and about five portions of cobbler. Here’s what was left over after they ate. There are pork ribs, beef ribs, sausage, and half a chicken (they weren’t keen on the brisket, either, and didn’t get any. They were regulars here). 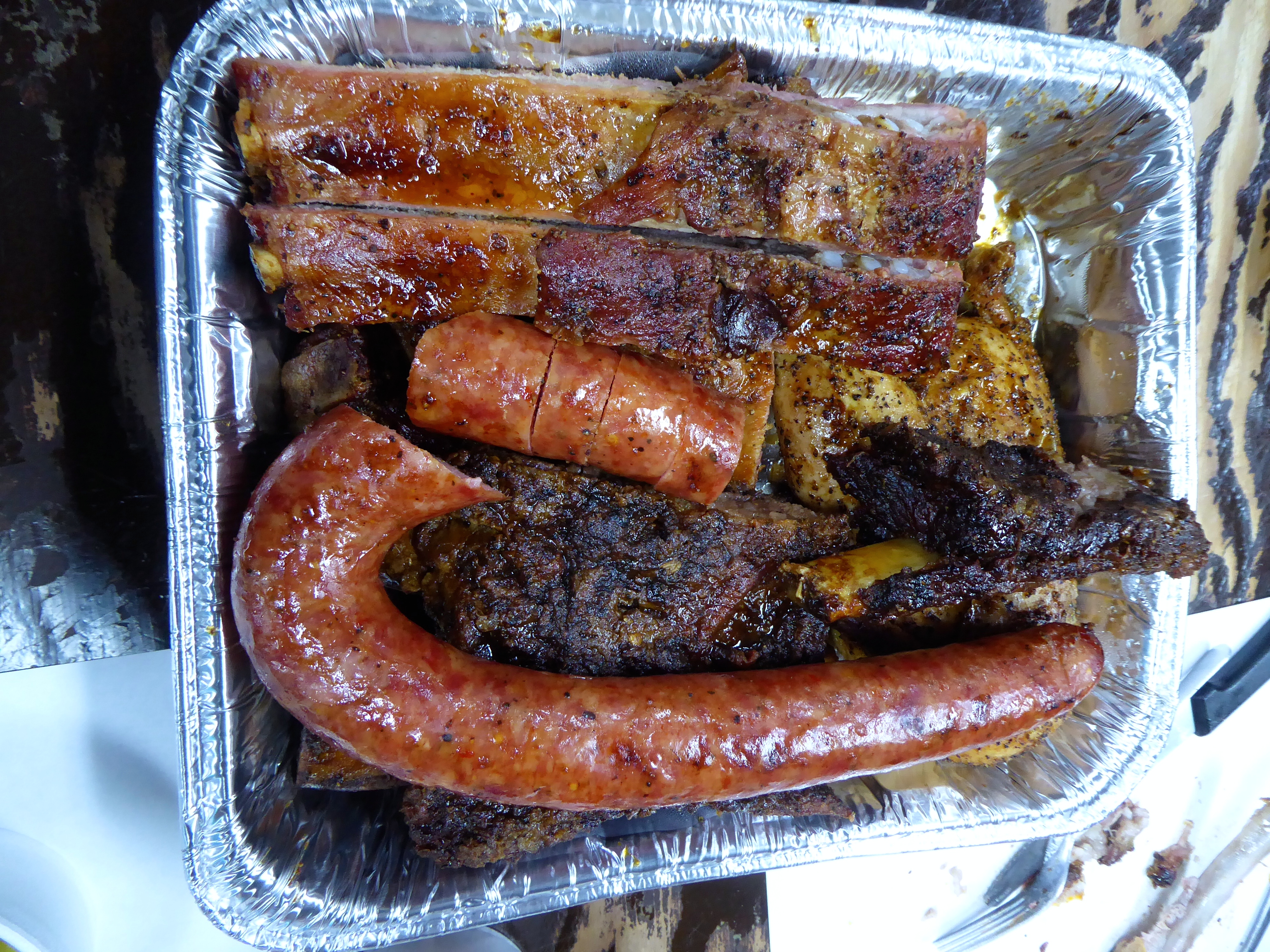 When I left after an hour of eating, the place was full and there was a line out the door. And remember, this is on Easter, when respectable folk are eating ham at home! The take-out window was also doing a huge business. 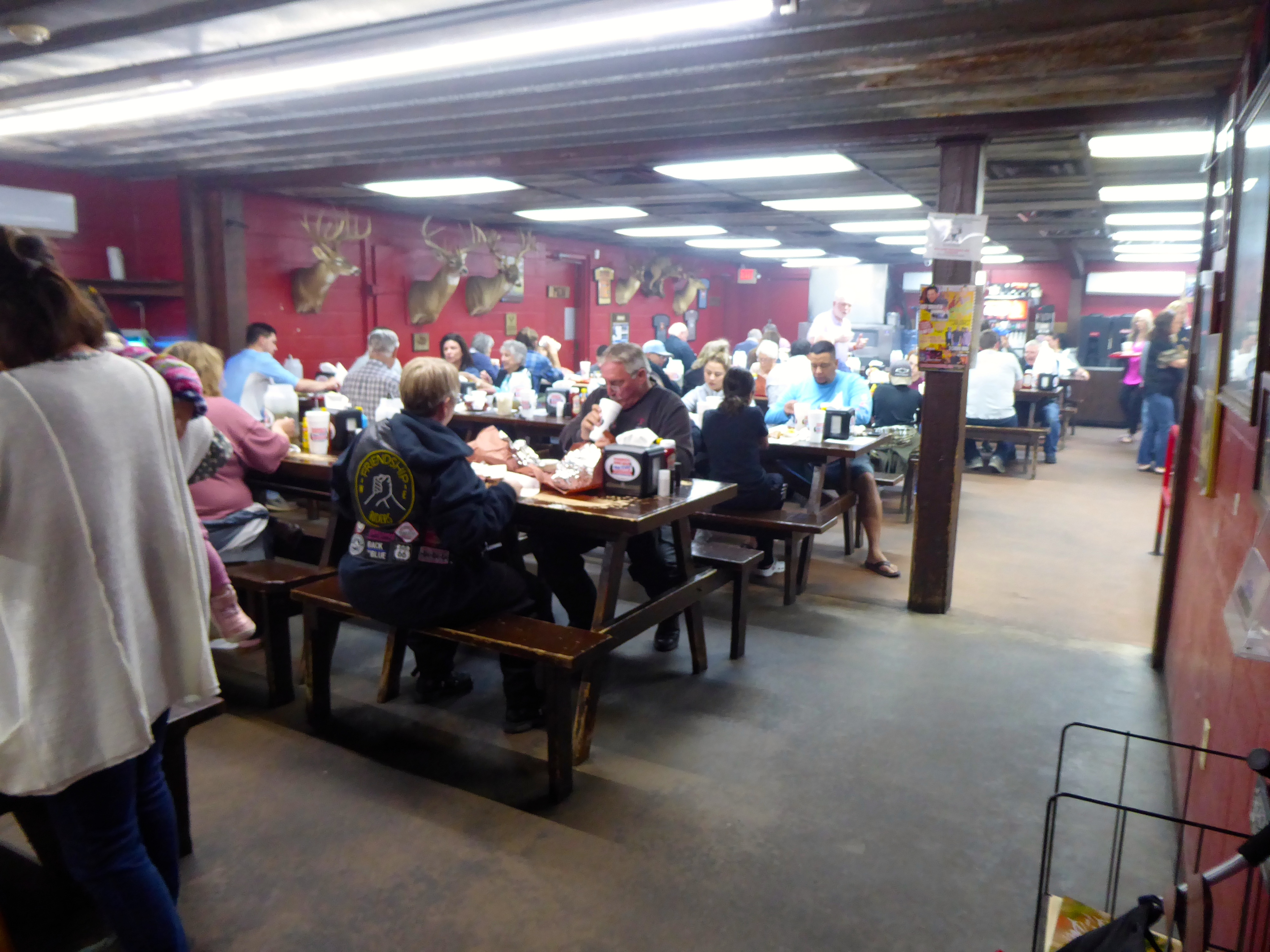 The line at noon at Cooper’s, “Home of the Big Chop”. Indeed it is! 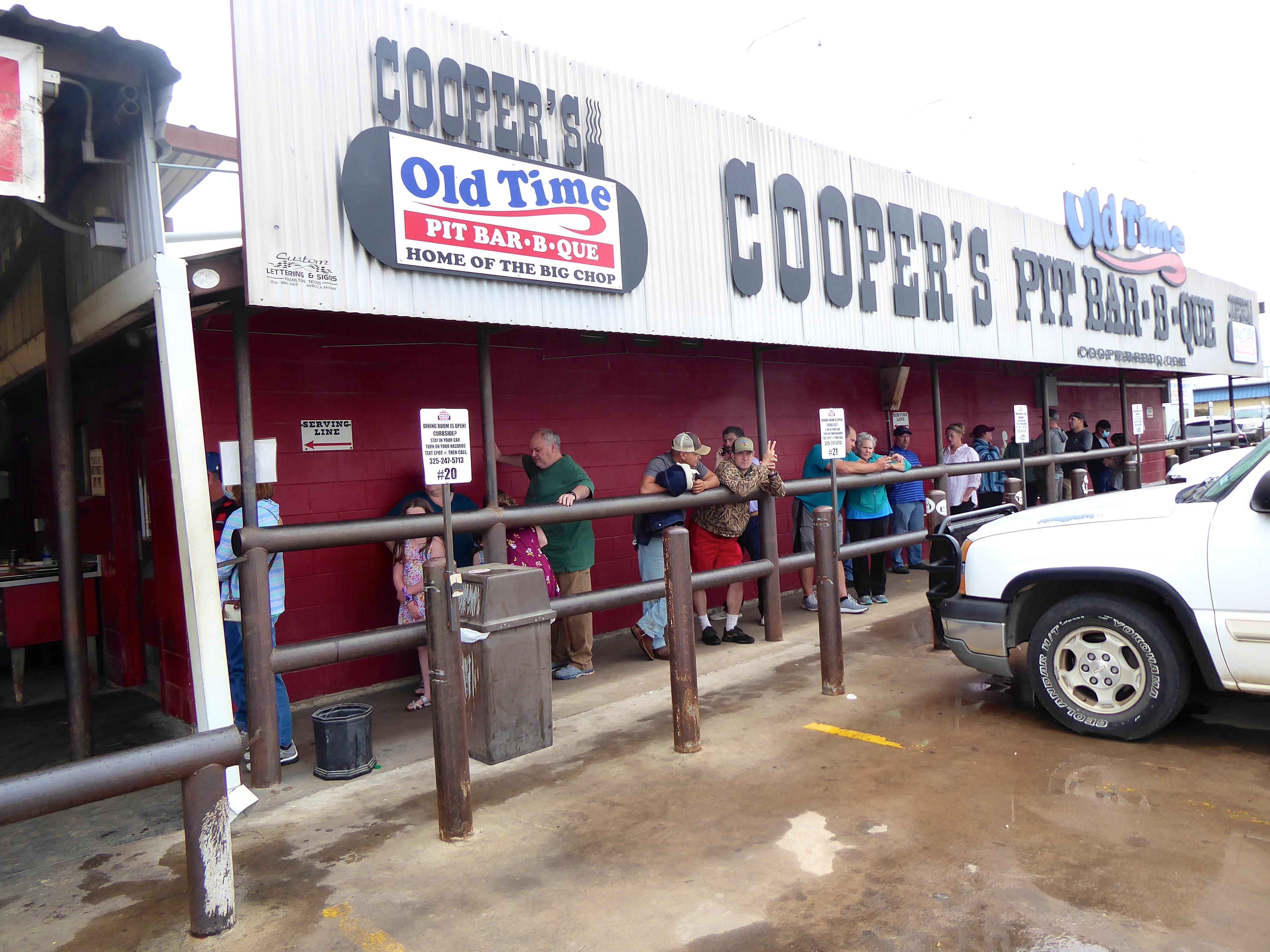 The smoker out back: 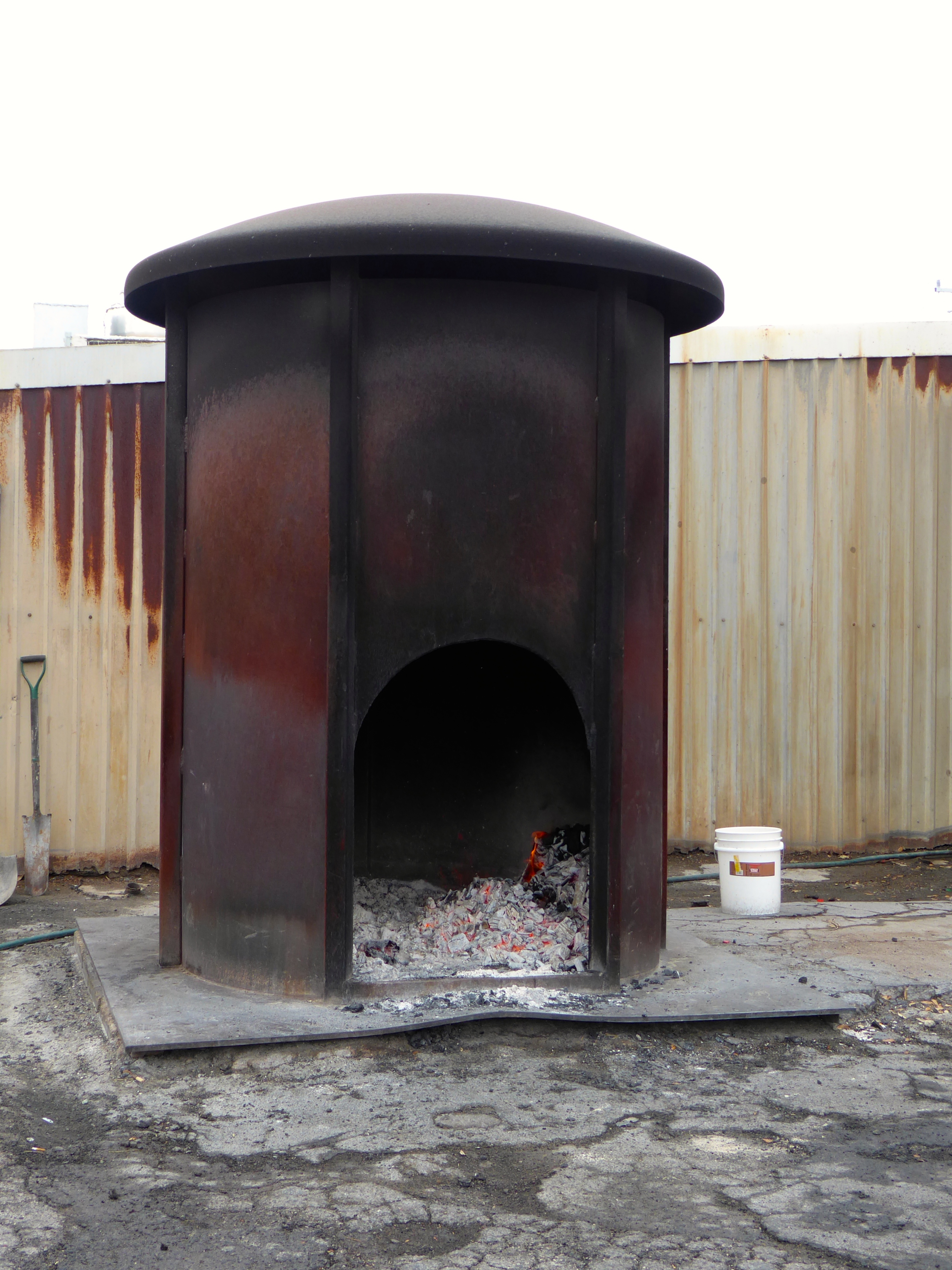 They use charcoal made from mesquite rather than straight wood. That is the sign of a lazy pitmaster: 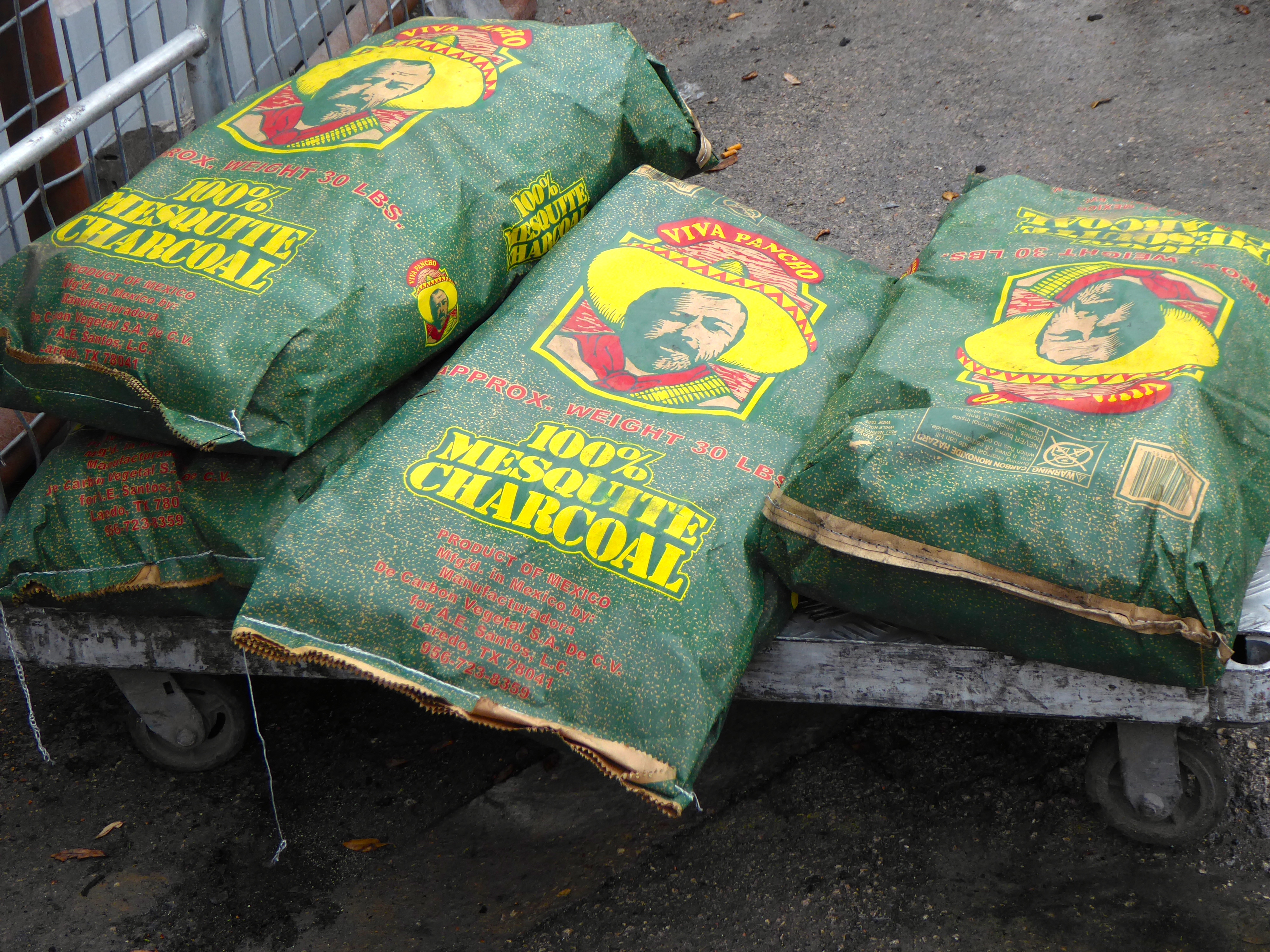 Right across the street from Cooper’s was—you guessed it—a taxidermist: 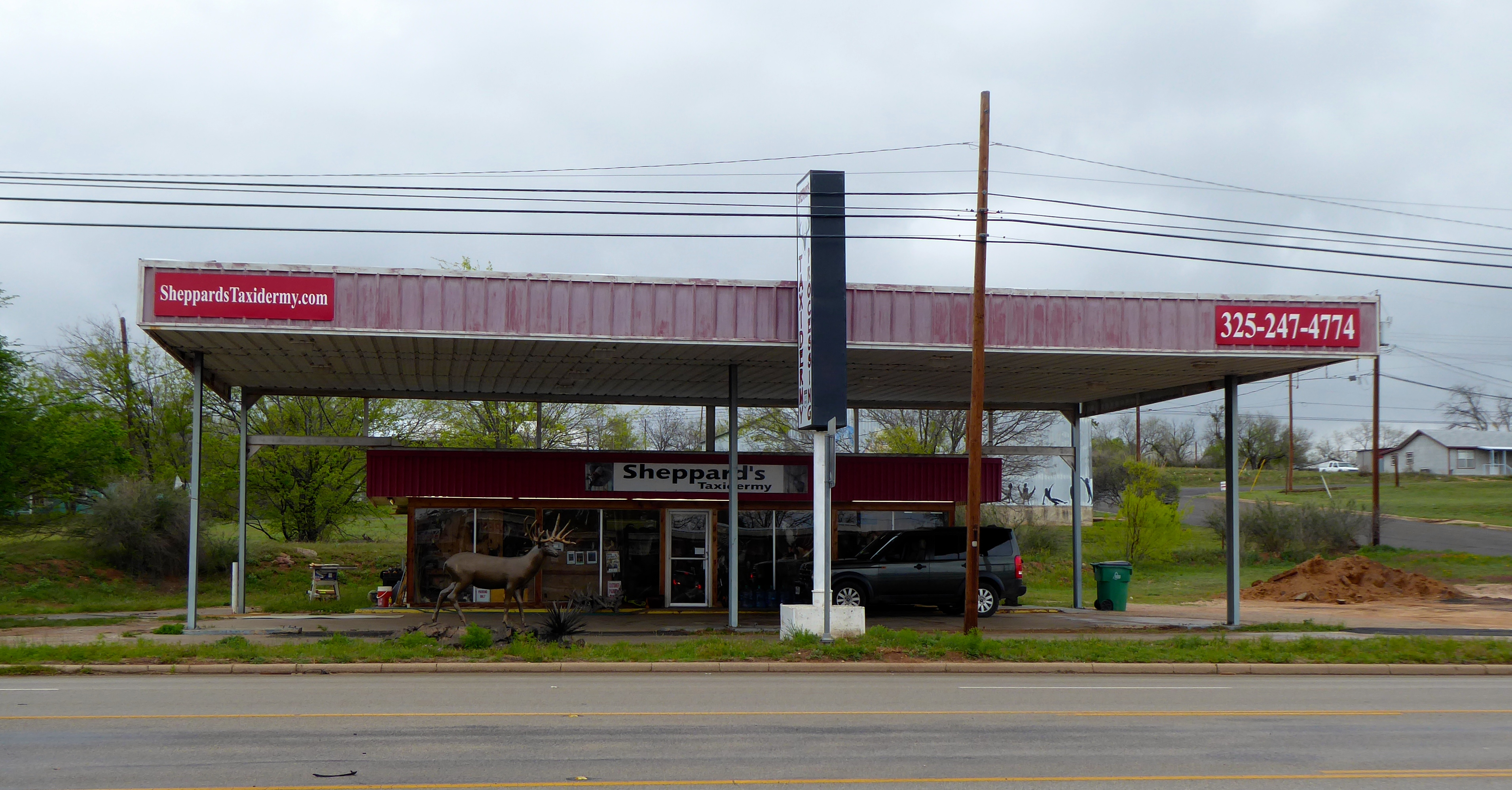 Here’s the Llano County Courthouse and Jail in the center of the town square. Built of sandstone in 1893, it is on the National Register of Historic Places. The stones in front remember members of the armed forces from the county who died in action during WWII. 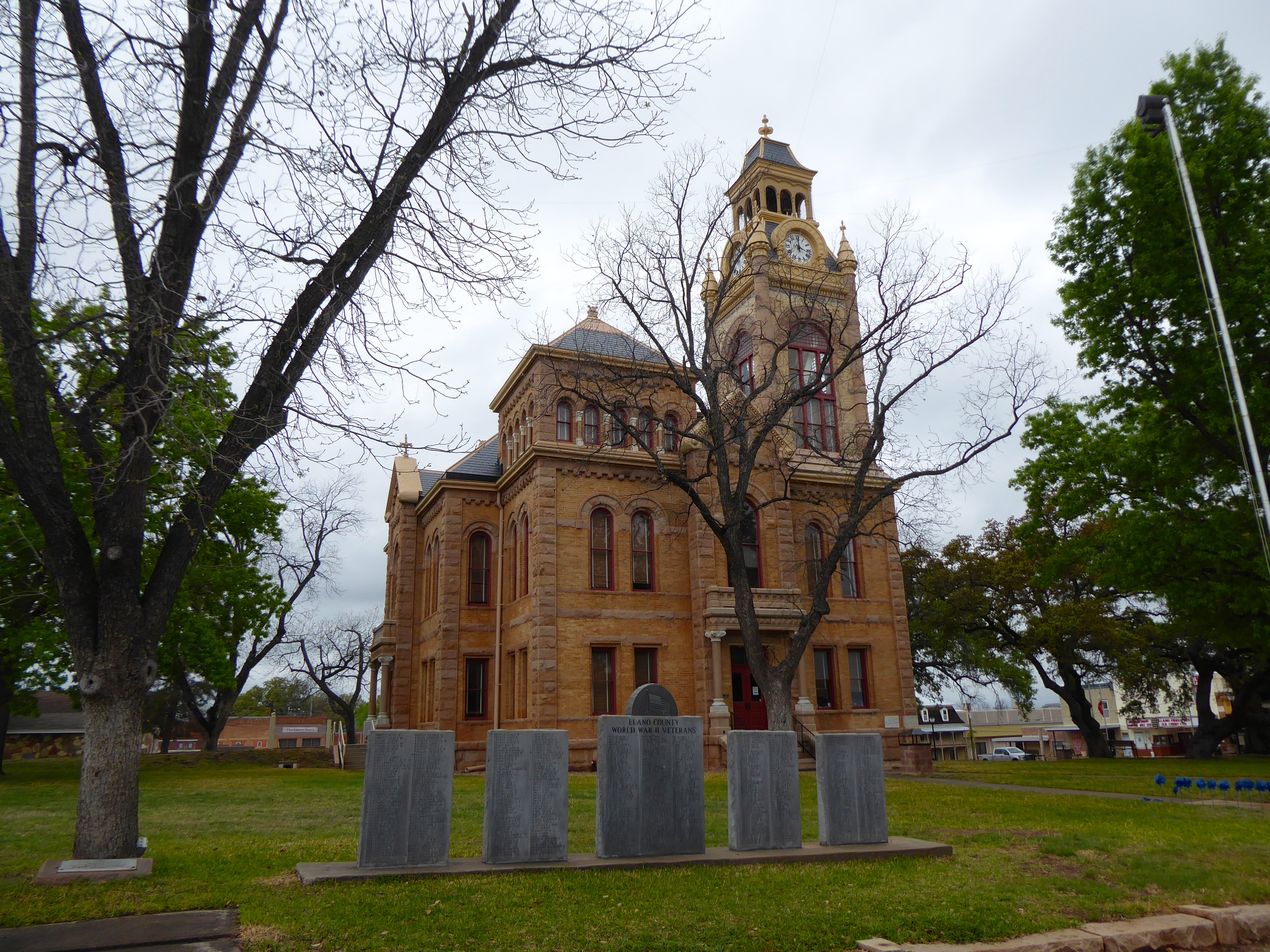 Pink flowers along the road (botanists, please give me the species): 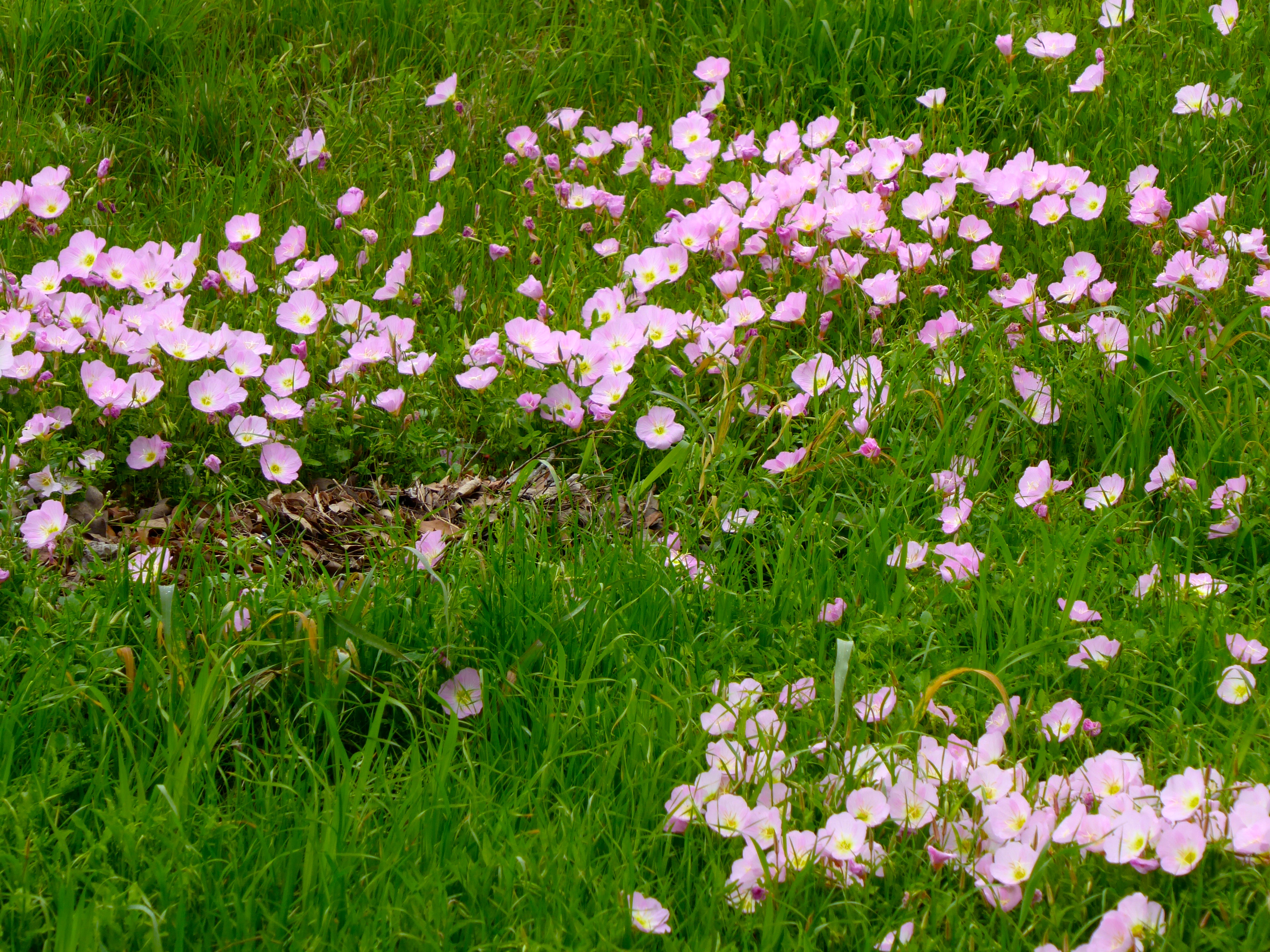 I had to cool my heels when I arrived at my cheap motel 1.5 hours early. But I heard a bunch of chirping nearby, which turned out to be a large number of great-tailed grackles (Quiscalus mexicanus) who had made their nests in the nearby trees. Each tree must have had 20-30 nests, each with two noisy superintendents. I filmed under the trees so you could hear their songs.

Listen to the videos below: I swear that one grackle is imitating a car alarm. Looking it up, I see that common grackles can imitate other birds and even “human noises”, but I found nothing on great-tailed grackles or about car alarms. You be the judge. You have to admit that the song is enchanting, though.

Another video under the Grackle Tree:

And a male showing off for a female who isn’t interested: 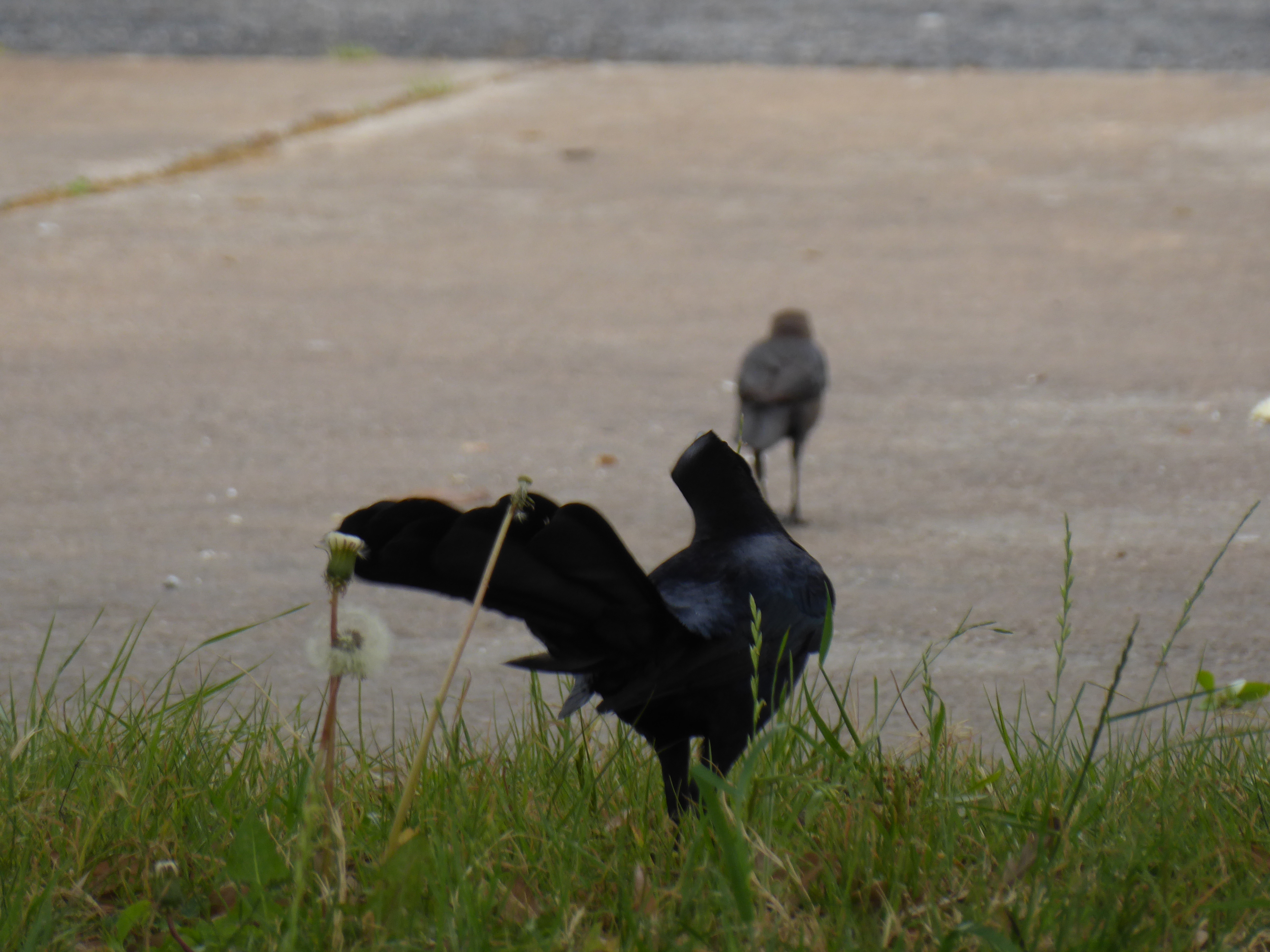 33 thoughts on “Texas, Day 7: Johnson City to Georgetown via Llano”