Yesterday morning I woke up in San Antonio after a fitful night’s sleep (was it the tacos?), and hightailed it out of town as fast as I could. I had two destinations, each an hour’s drive from the previous one.

My first stop was the renowned Texas Pie Company in Kyle, a small town (ca. 28,000 people) that had at least one notable resident: writer Katherine Anne Porter spent a few years here as a child.

Now it’s the Home of Excellent Pies. Here’s the store; I was waiting out front when it opened so I could get freshly baked pie. Look at that giant slice of cherry pie over the door! 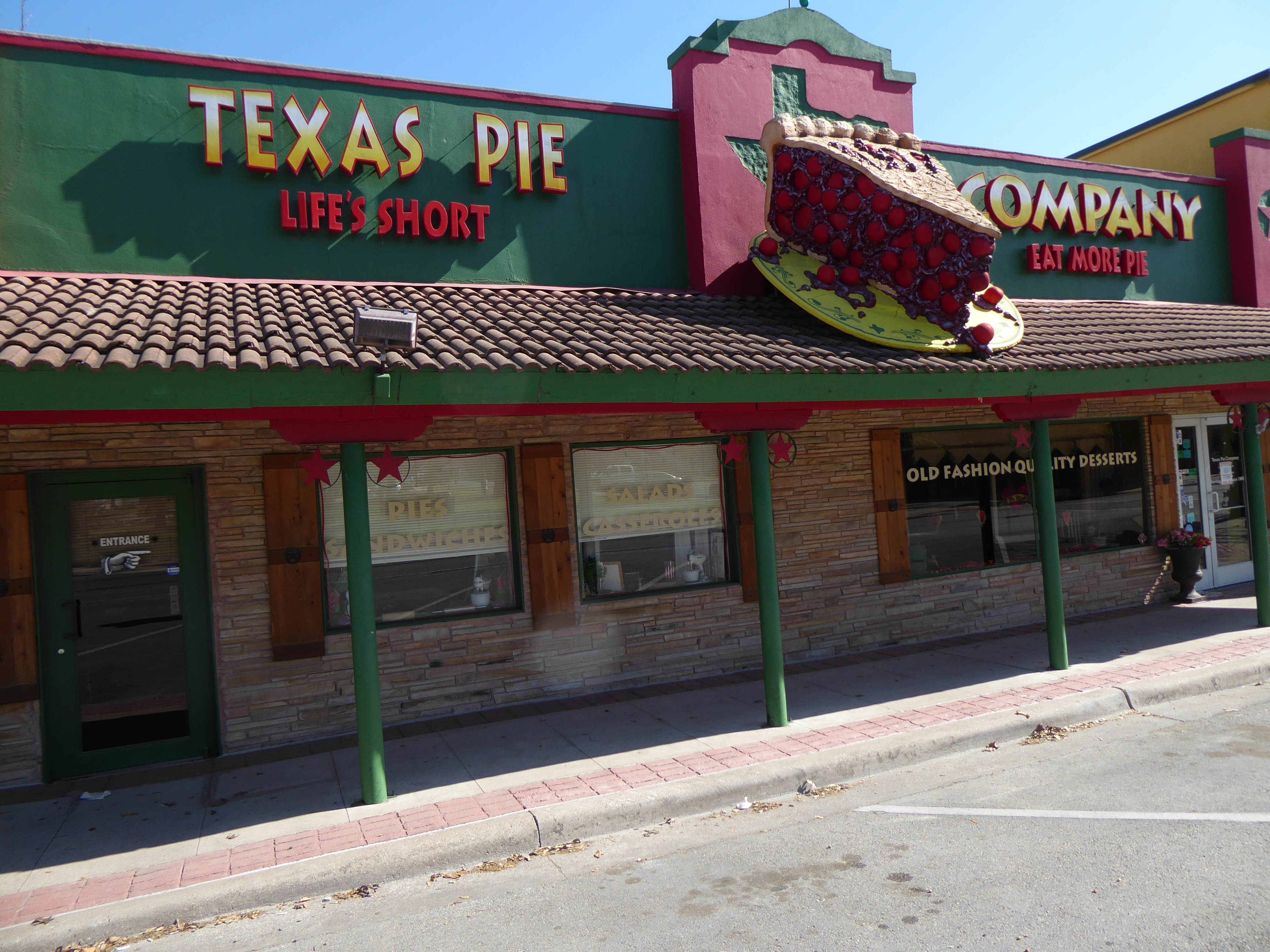 They sell all manner of baked goods, but of course they don’t call it the Texas Donut Company or Texas Lemon Bar company. YOU MUST HAVE PIE. Their pies are rated highly by food mavens Jane and Michael Stern, as well as others. Fortunately, you don’t have to buy a whole pie: they have 4-inch “mini pies” for $5 and the full 8-inch jobs (four times the area) for $18. Here’s the pie case with the mini pies on the top shelf. It was a hard choice: 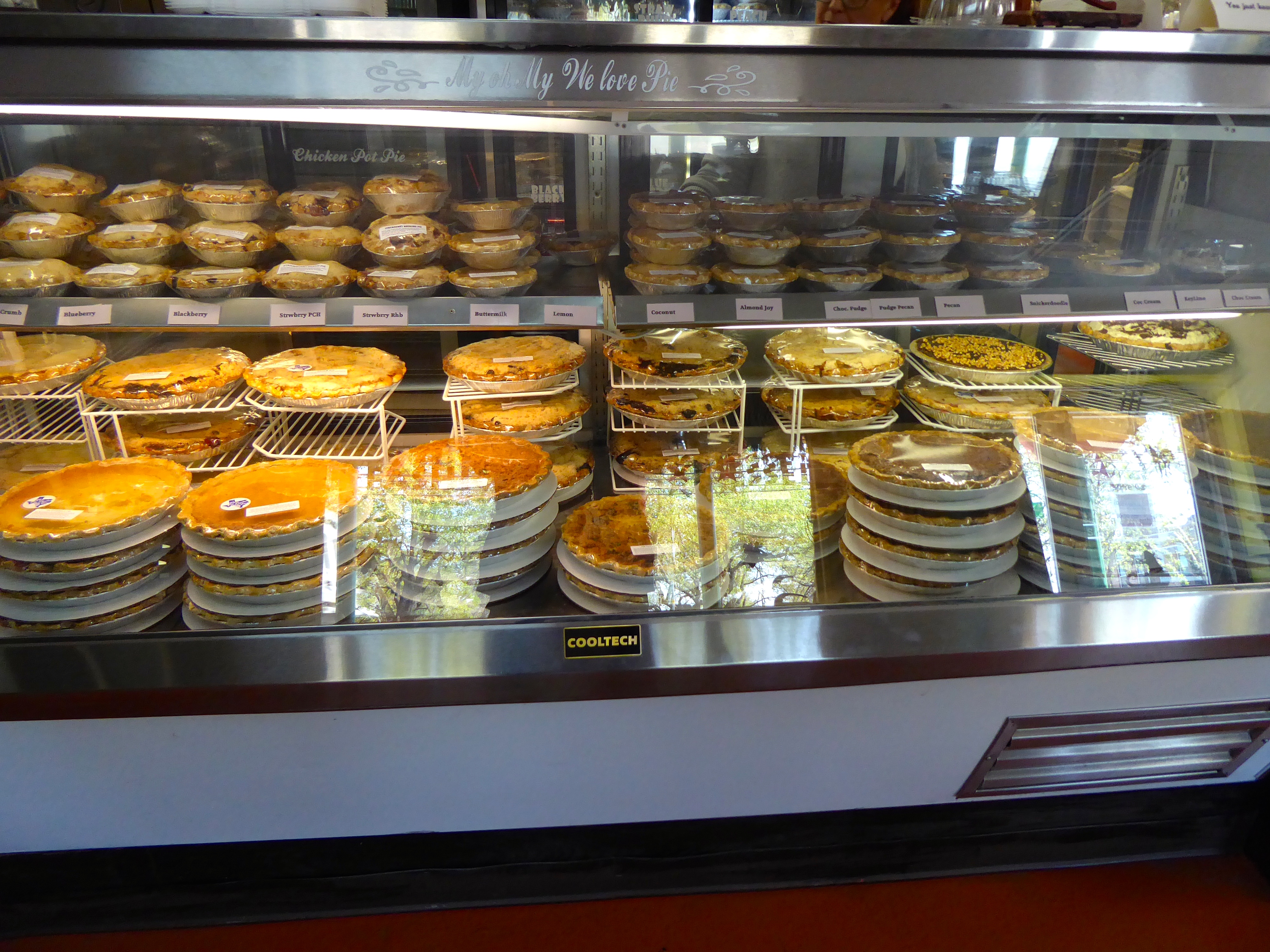 I was going to buy two mini pies but settled on four. Shown below, they include a strawberry peach pie, a buttermilk pie (an Indiana and Amish favorite), and two pies recommended by the counter woman (who called me “Honey”): pecan and dutch apple. I’ll have one a day for dessert after lunch, as she said they’d last about ten days at room temperature. I’ve already polished off the buttermilk, which was superb, with a thick and flaky crust and the sweet classic (and slightly tangy) filling of this species of pie.

A four-inch diameter pie is just enough to constitute a hefty dessert! (They gave me plastic forks.) Highly recommended if you’re driving between Austin and San Antonio: it’s right off the main highway. 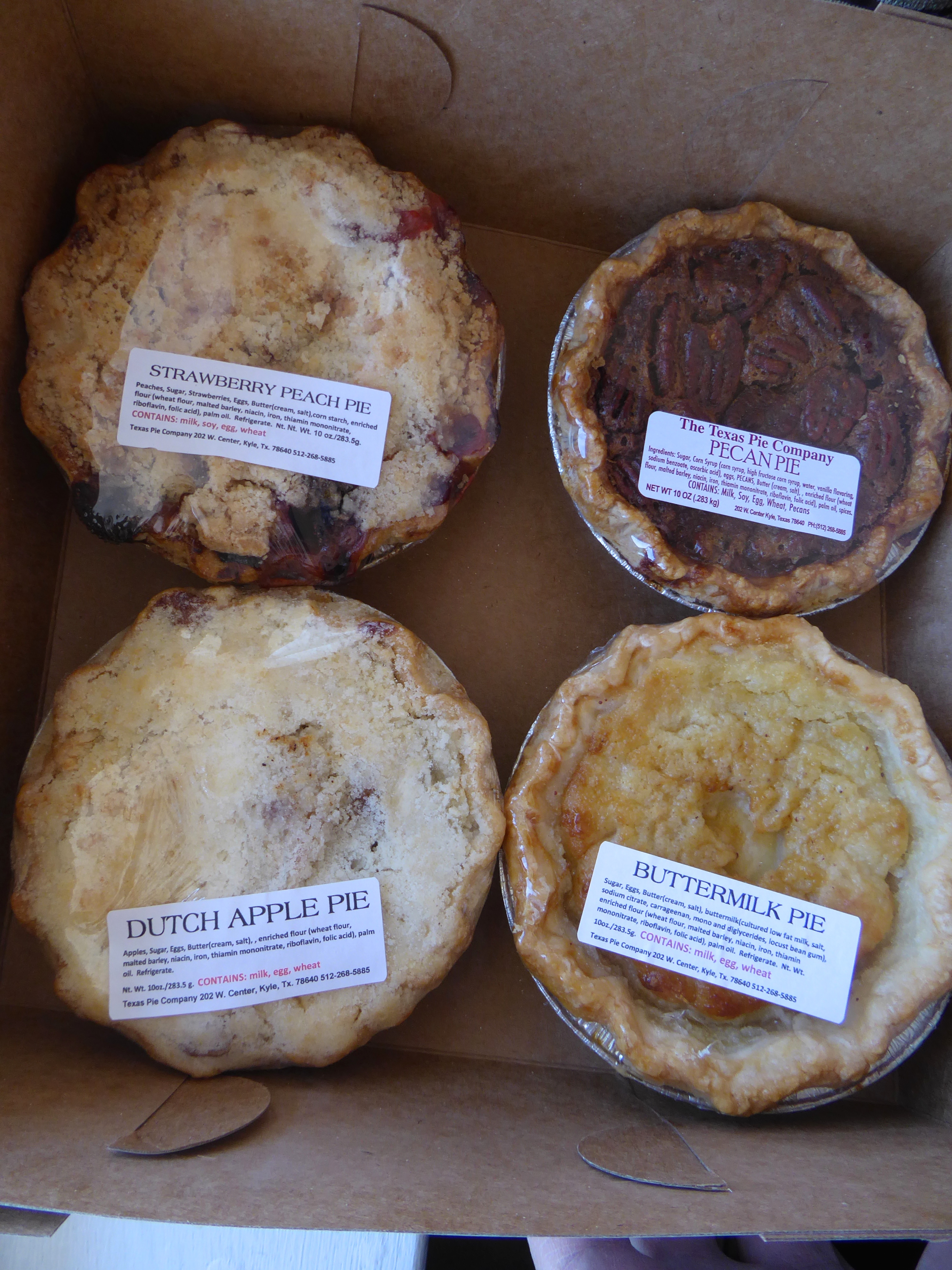 But my prime destination was another hour to the northeast: the Southside Market in Elgin, famed for its sausages (also called “hot guts” in Texas). The population is about 8,000, and it’s in cattle country, so you see a lot of boots and cowboy hats. Check out the many famous movies filmed in this small town. 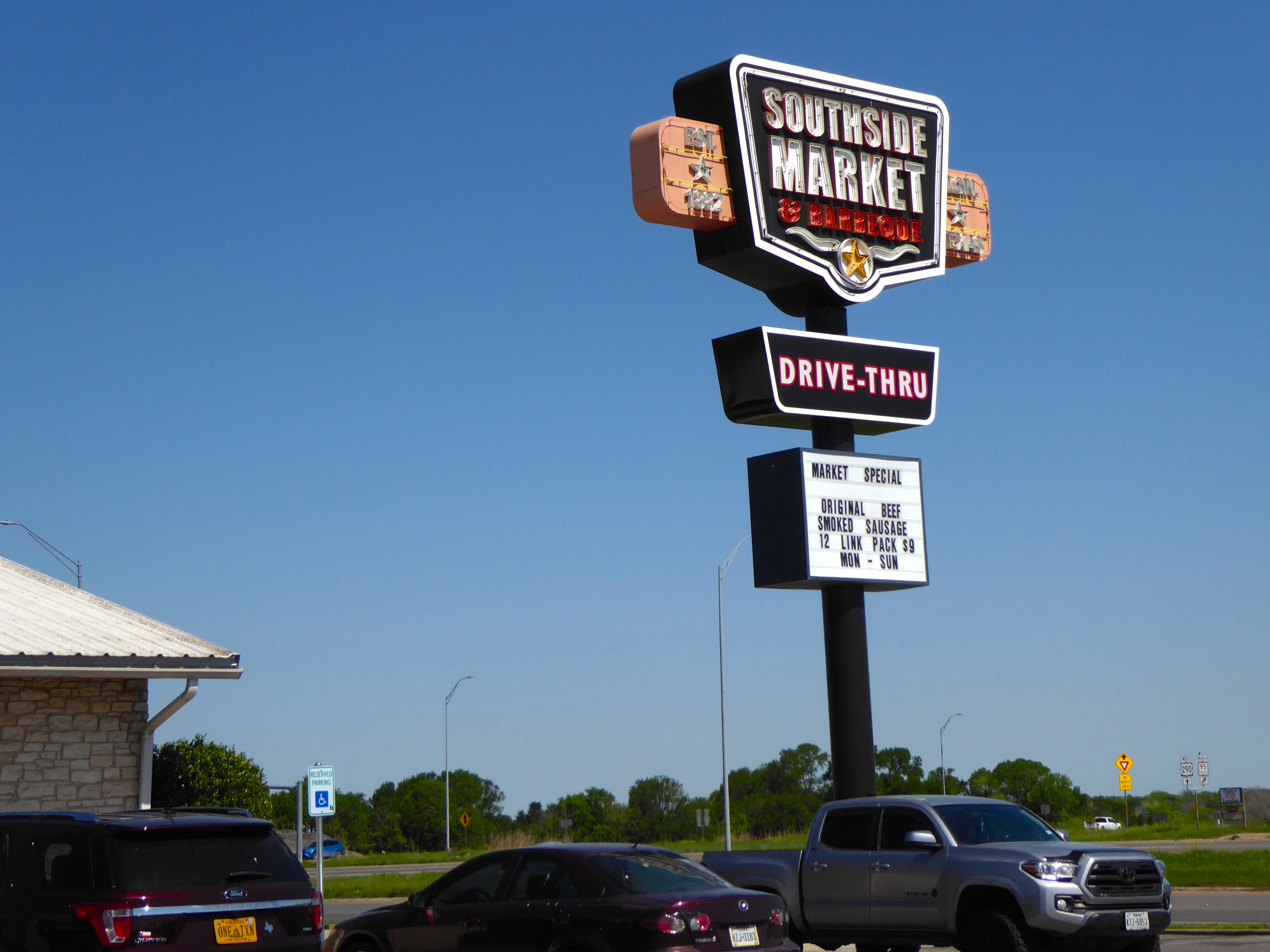 A cow or horse trailer parked outside. It was from Louisiana, and empty, so maybe they just delivered a load of cattle. 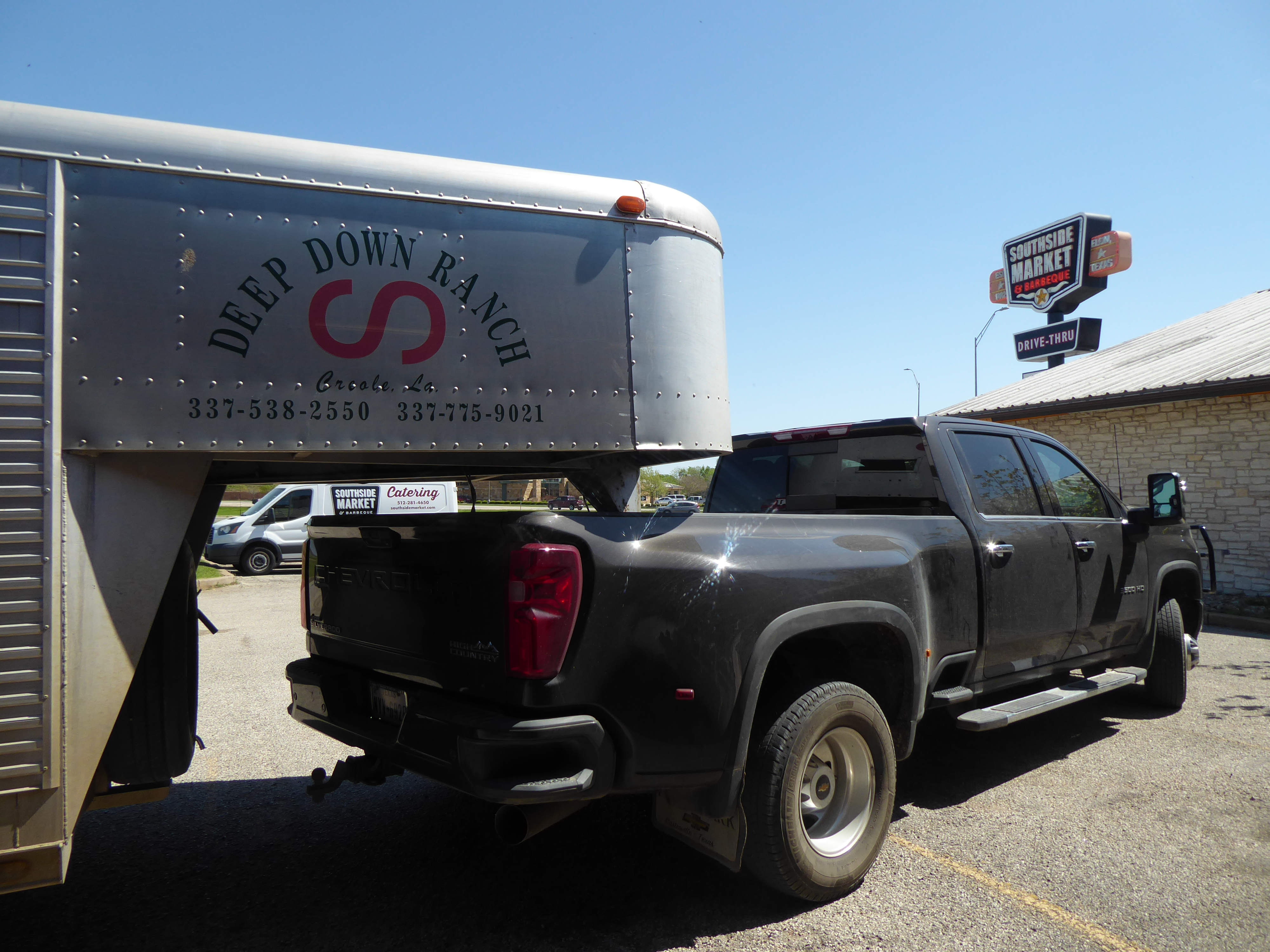 At noon there was a huge line of cars outside picking up orders. Every car that you see is in the BBQ line. The place is famous for its sausage, but the brisket is also well known. 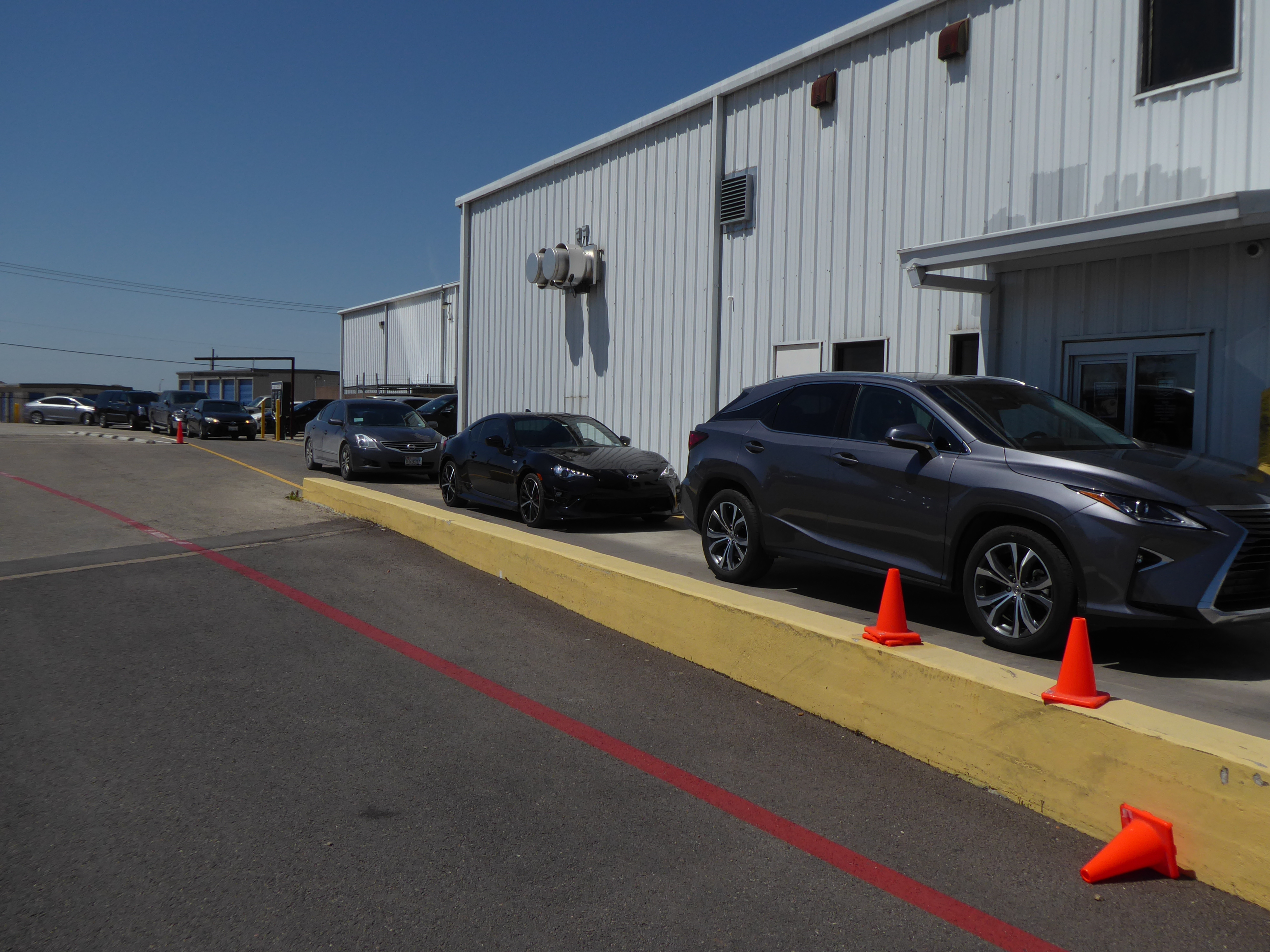 An old smoker outside the door: 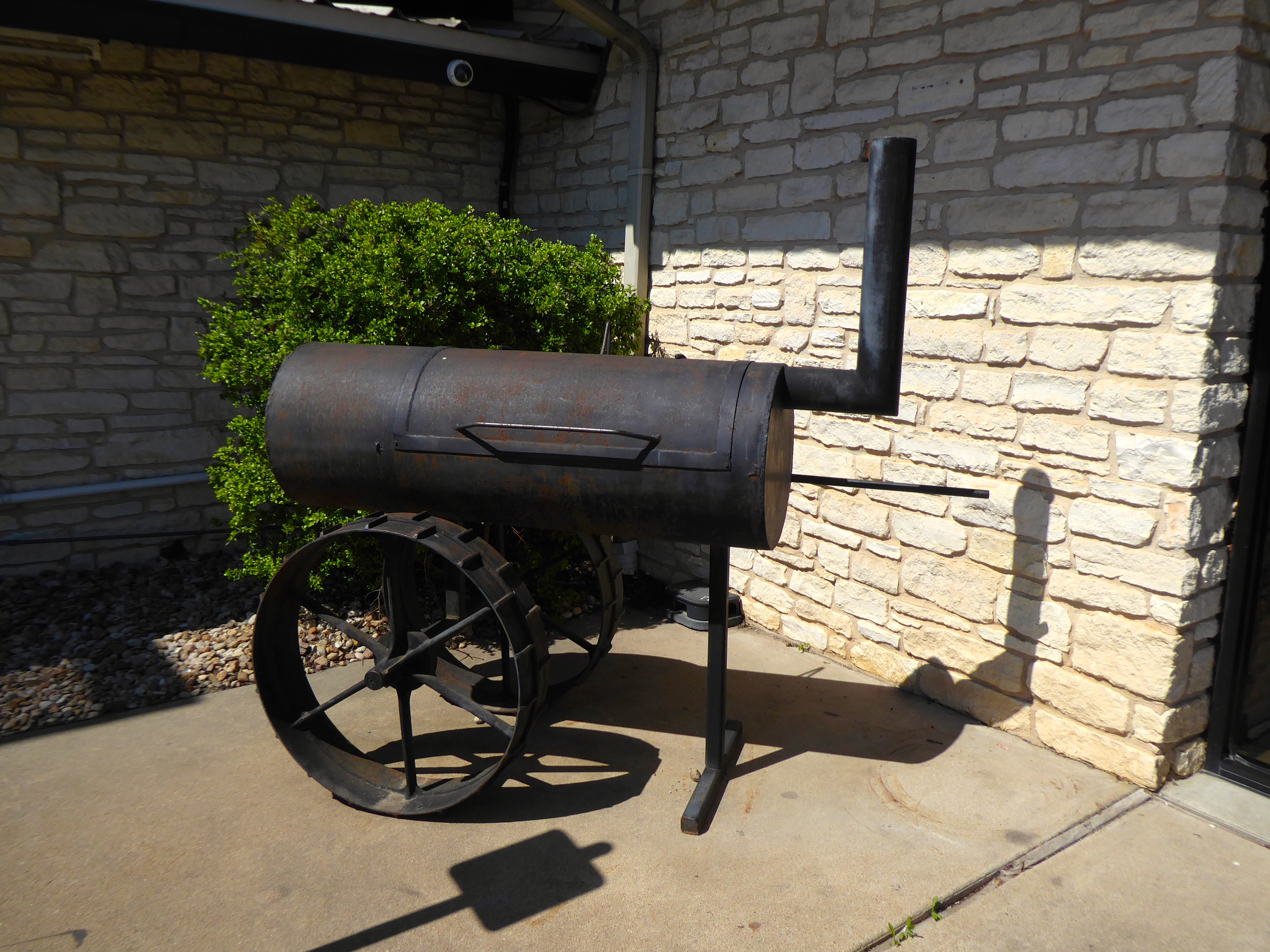 Inside, there was already a huge line by 11:30 am (bbq is often eaten early in Texas). Note the social distancing and masks. Despite the absence of a statewide mask mandate in Texas, most stores and restaurants still require you to enter wearing a mask, and everybody I saw was compliant. 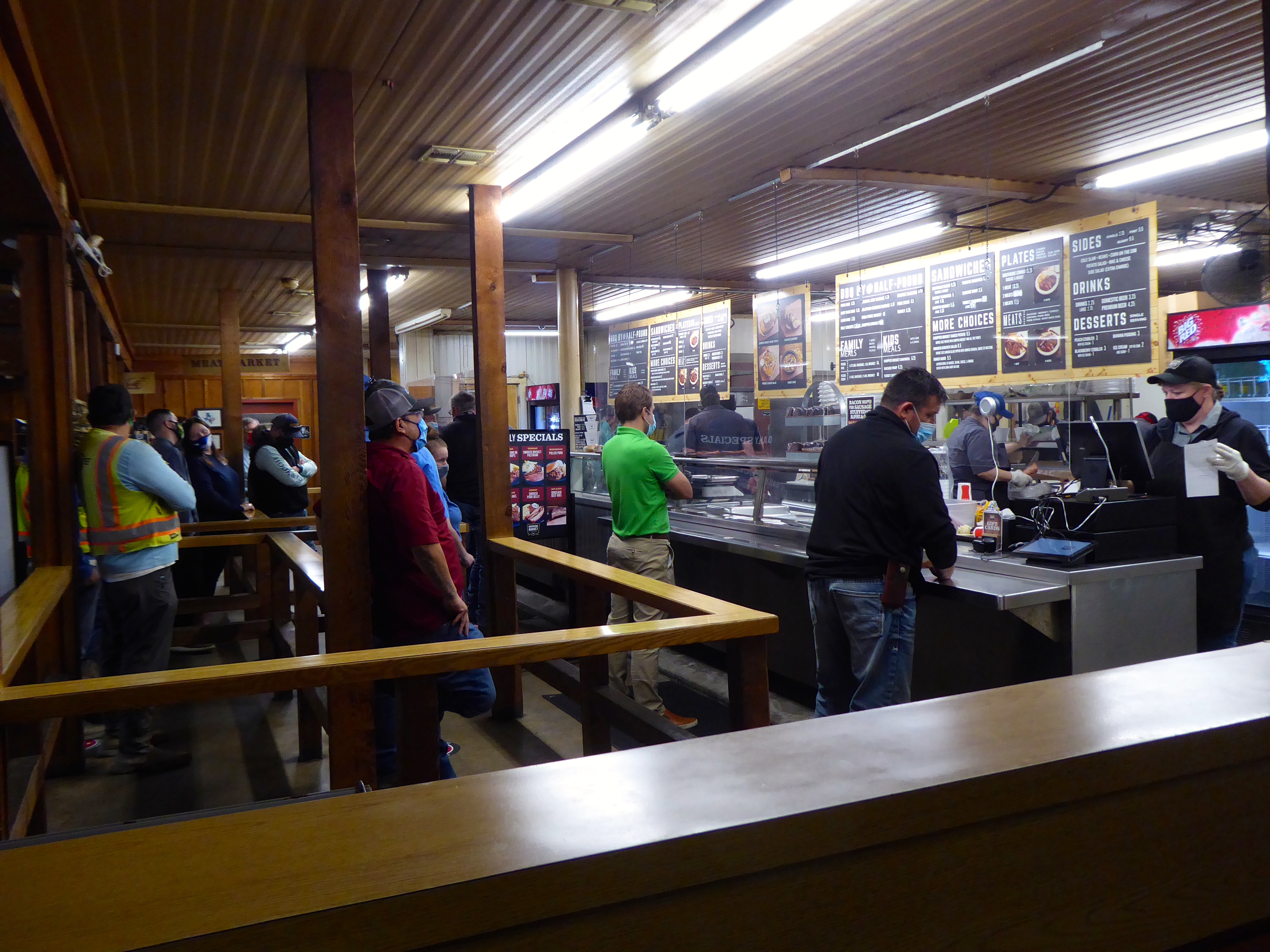 This is a fancy menu for a BBQ joint. I got the “Southside Combo Plate,” which had a sliced sausage, three fat pieces of juicy brisket, two pieces of white bread and a picks (a separate counter had jalapenos, sauce, and onions). My sides were beans and potato salad, which turned out to be good choices. 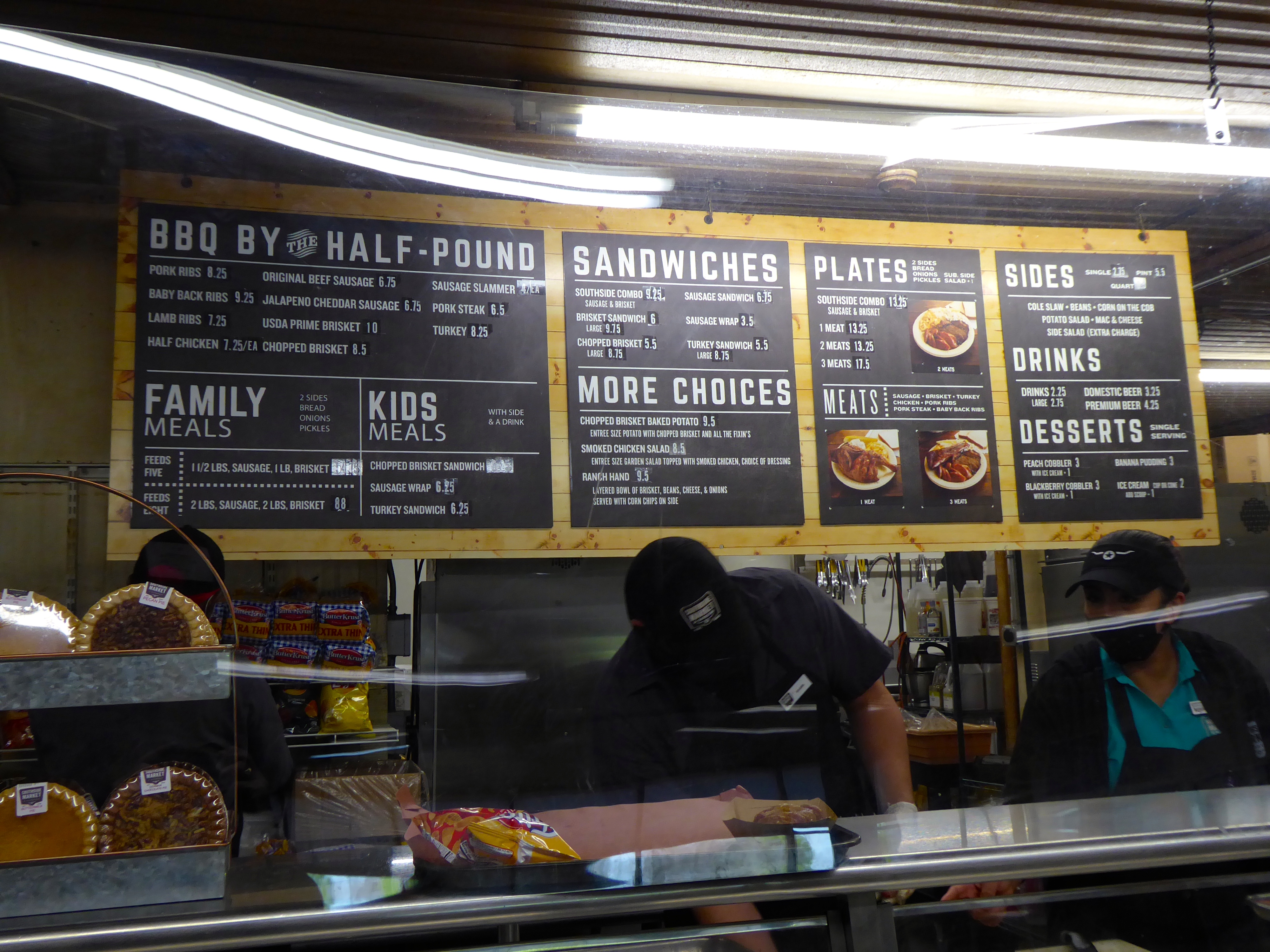 One of the two eating rooms—this is a big place for a barbecue joint! 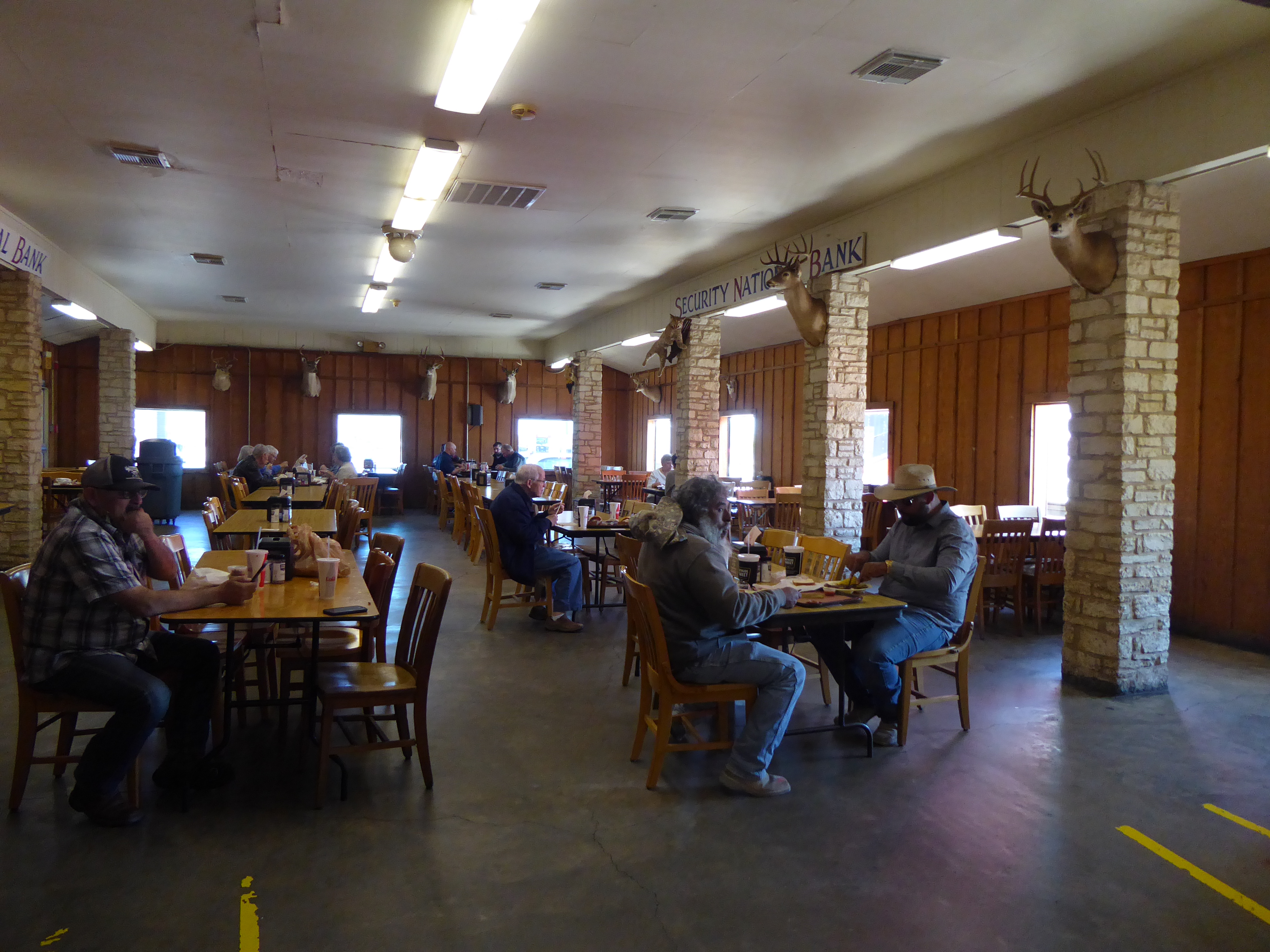 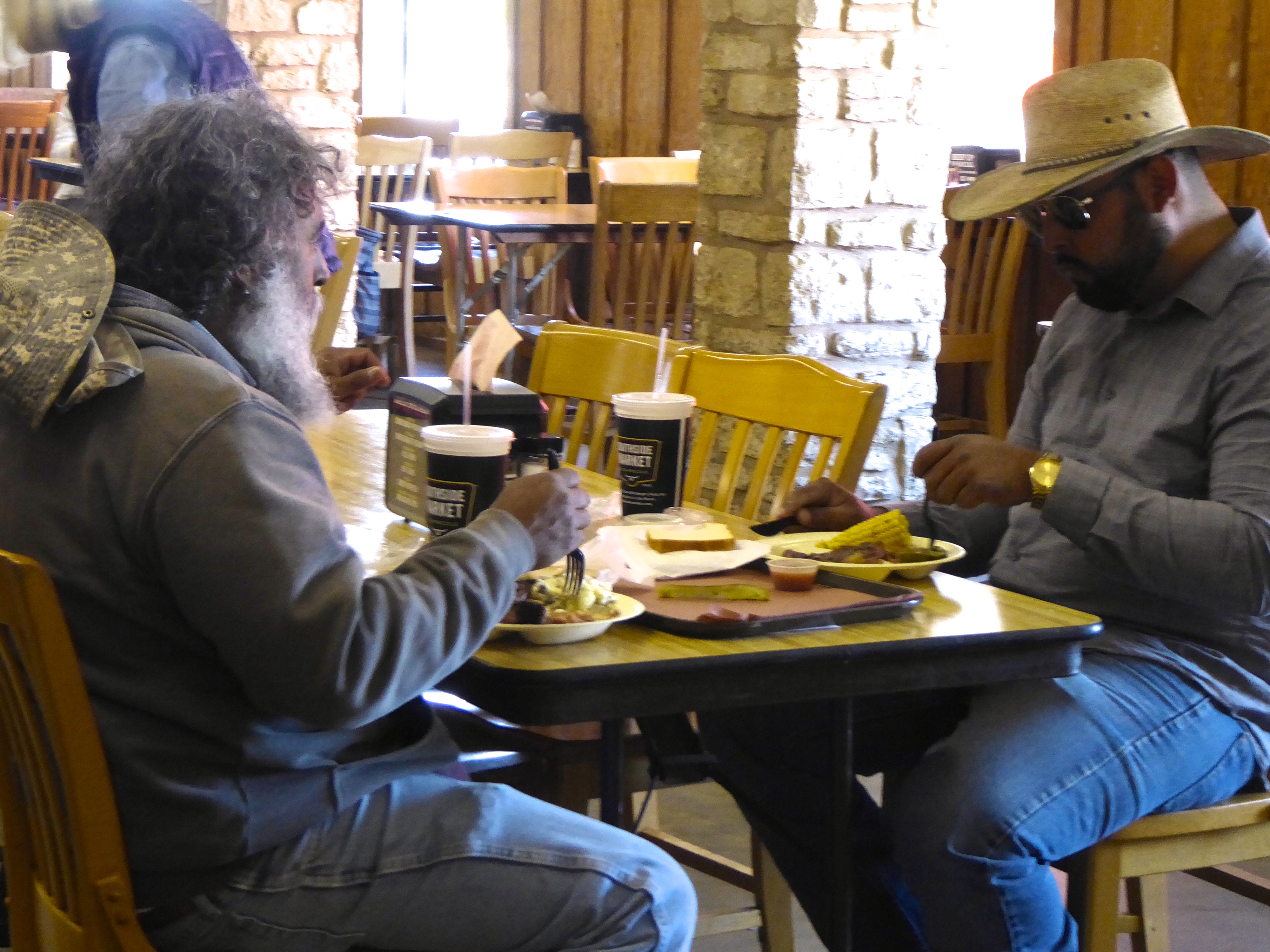 My plate, described above. I didn’t see the condiment bar with saltines, but wish I had, as I prefer saltines more than white bread with my meat. 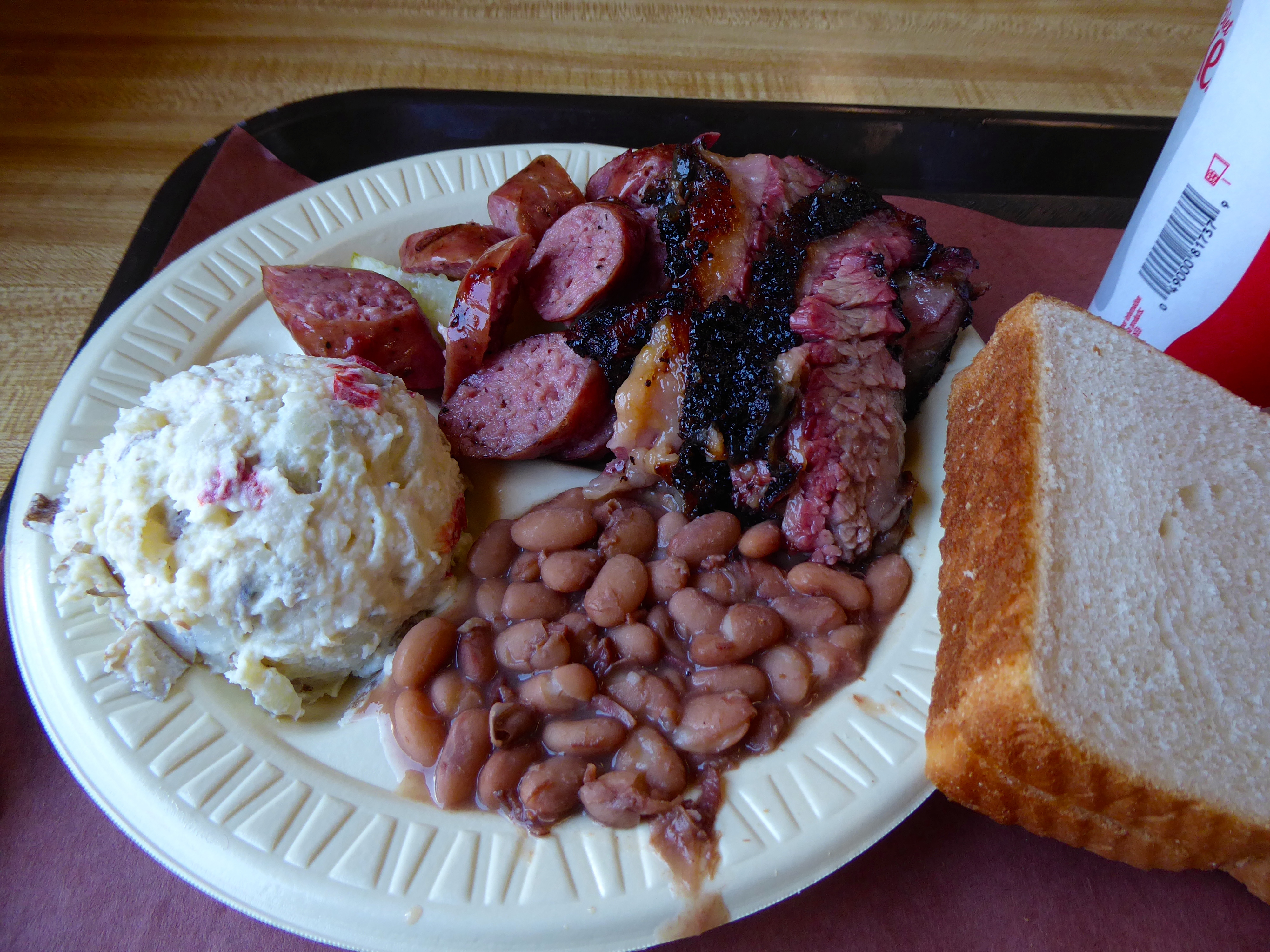 This shot of the brisket shows all four essential bits: the charred bit on the outside, the red “smoke ring” of meat below it, the meat, and the fat. Brisket without any fat is dry, good only for those on a diet. 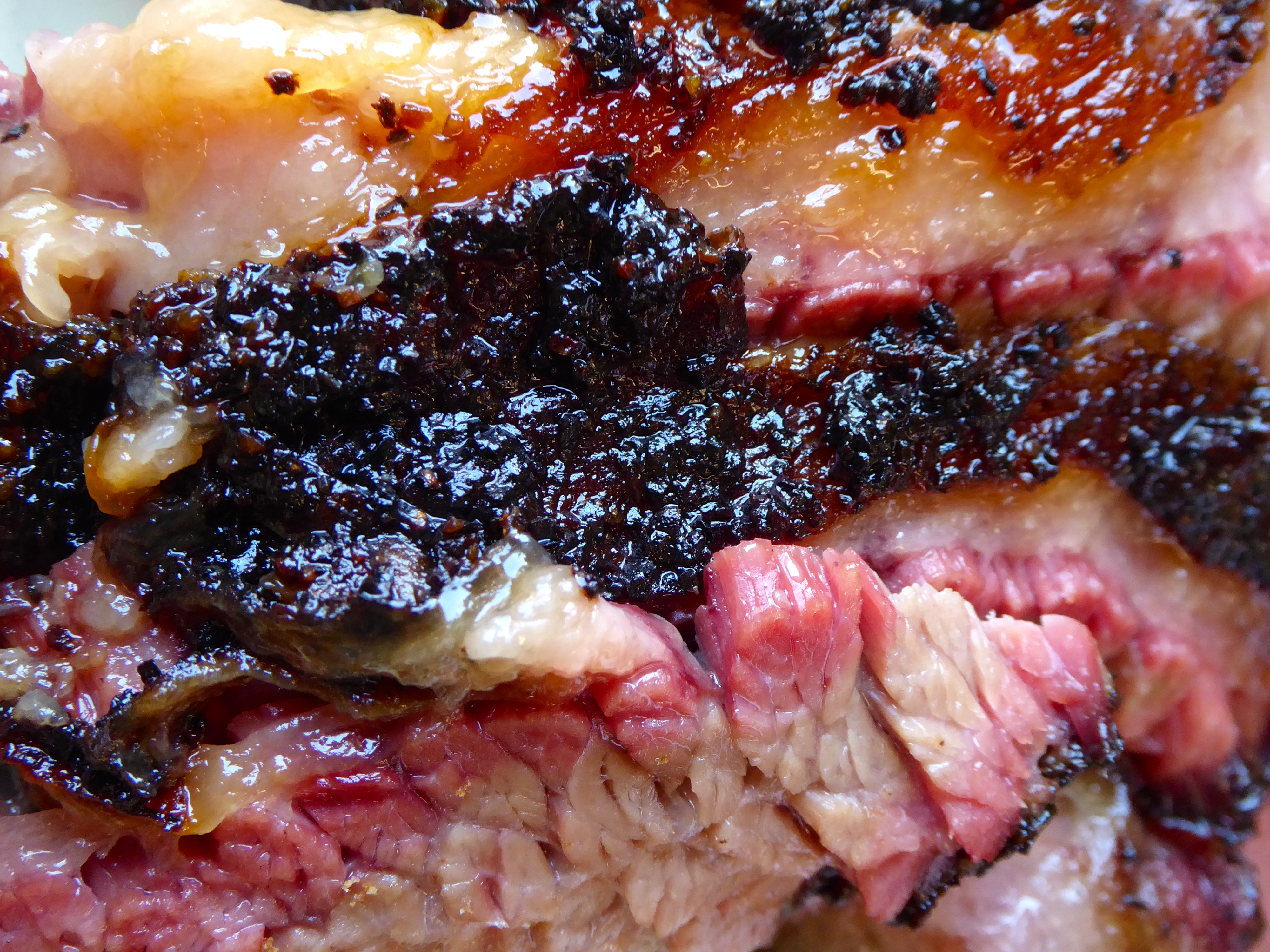 Closeup of the sausage. 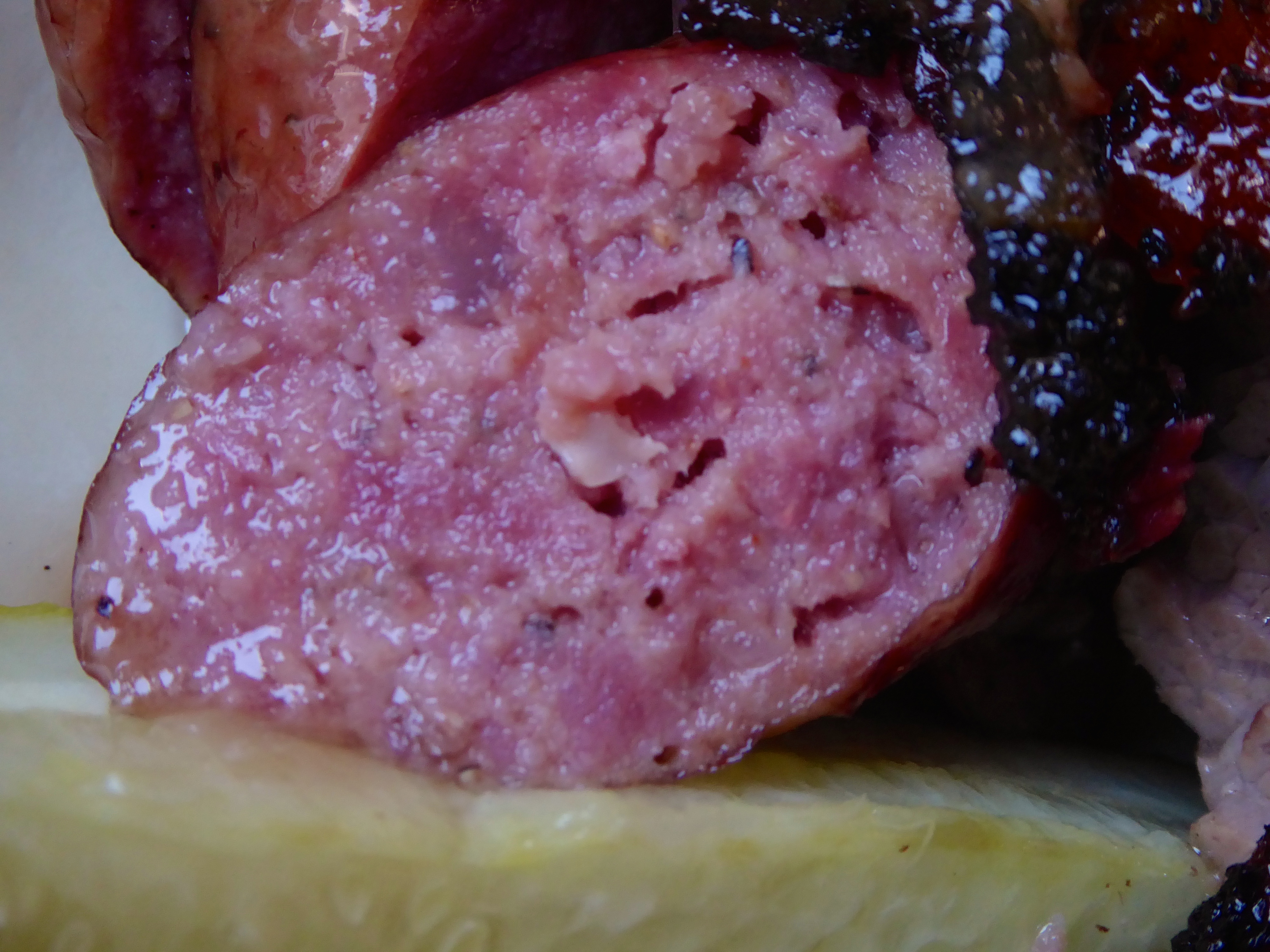 My judgment on the Southside Market: the BBQ was very good, but not great, and that includes the sausage. In fact, both the brisket and the sausage were better at Black’s BBQ in Lockhart, and the brisket was better at the City Market than at either Black’s or the Southside Market. The City Market remains my top choice for Texas BBQ, but I have other places to visit, including the famous Louie Mueller tomorrow.

Many hold Mueller’s to be the best barbecued brisket in Texas (ergo the best BBQ in America), but I’ve never been there before. It’s in Taylor, Texas, just 15 minutes from Elgin, and I’m staying there now so I can be at Mueller’s at opening time of 11 a.m.  If you’re a reader in the area (it’s only 30 minutes from Austin), I’ll be glad to meet you at Mueller’s at 11 on the dot today (Friday).

The Southside Market has plenty of sausages to take home, and they were doing a land office business at the meat counter. 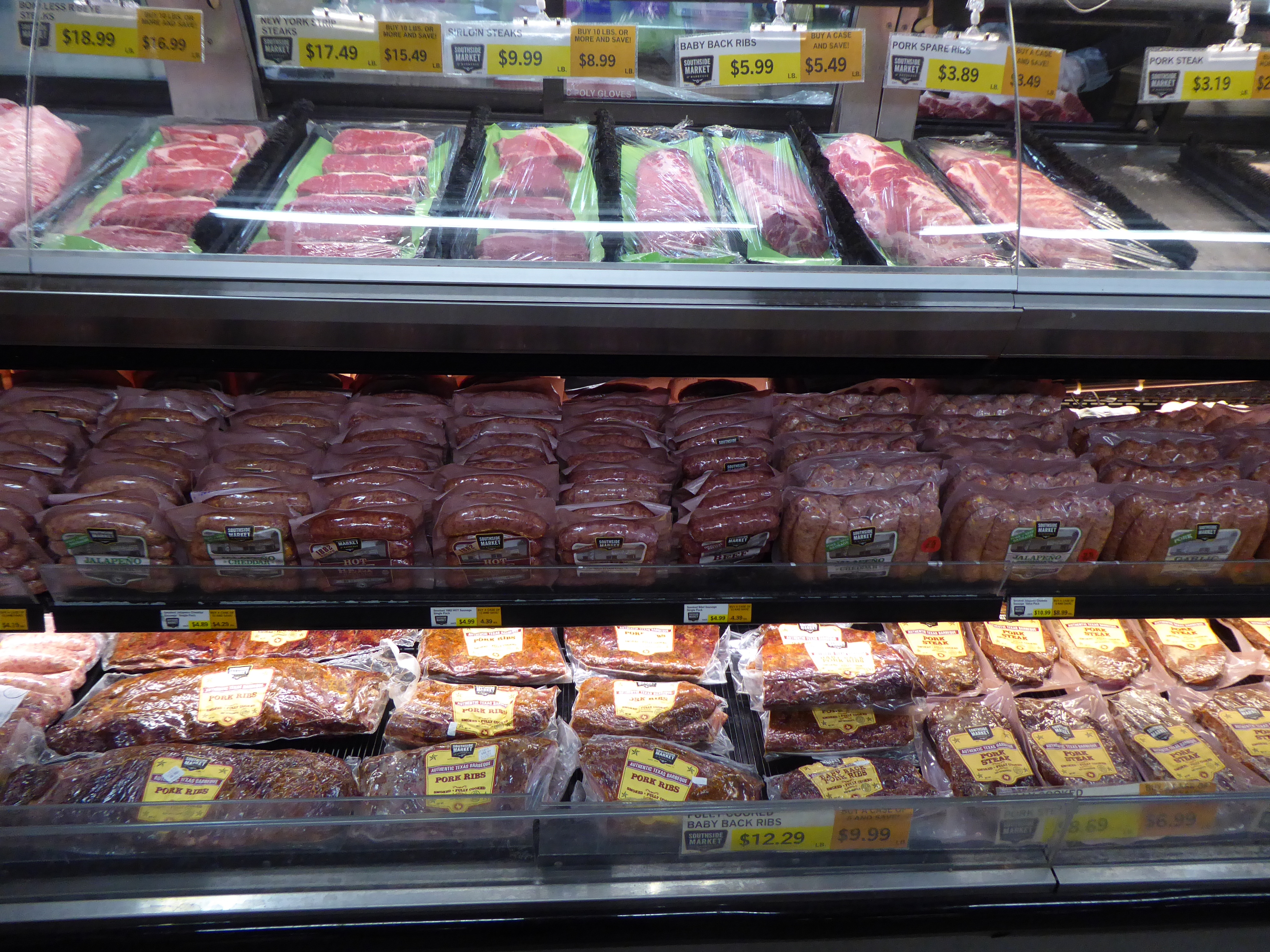 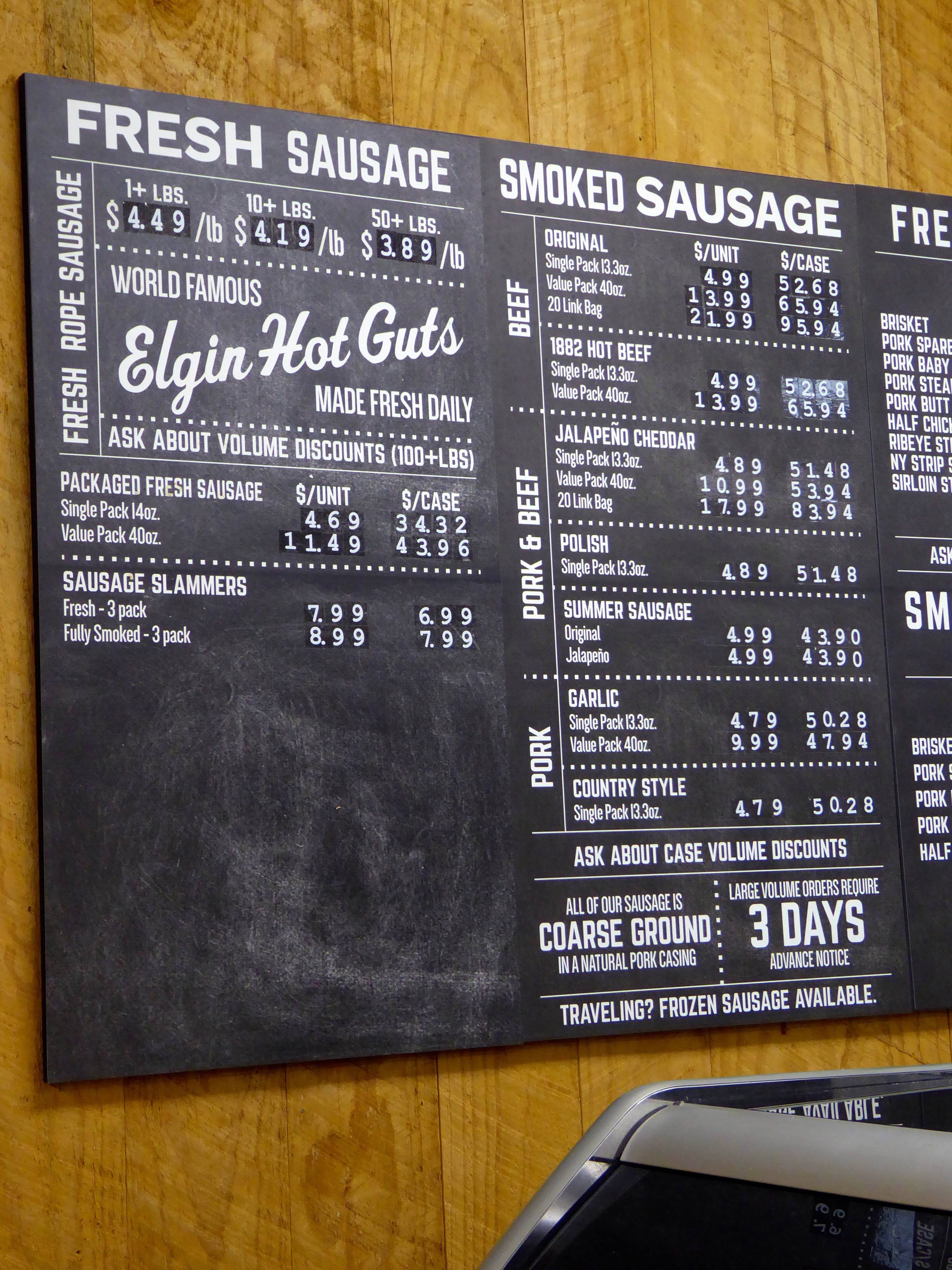 In a few hours, on to Louie Mueller!

32 thoughts on “Day 4 in Texas: San Antonio to Taylor”