Well, it’s a good thing I posted on the day before yesterday that I was going to eat at the City Market in Luling at 10 a.m.Tuesday, because I met two friends there: both readers of my website who traveled to the BBQ joint to surprise me. One came from near Houston, a four-hour drive, and the other from San Antonio, an hour away. You’ll see them shortly, though I will withhold names as I forgot to ask permission (it was okay to post photos, though).

I went to this place many years ago and pronounced it the best BBQ of any sort in America. I was thus worried that it wouldn’t be as good as I remembered, for there had been dark mutterings on Yelp and other sites that the brisket was sometimes dry.

I needn’t have worried, though.

Below: outside of the City Market in Luling. At 10 a.m. there was nobody there except a guy standing in front of the restaurant. As I walked in, he came up to me and said, “You look like a guy who likes ducks.” He then introduced himself as a reader of my website, and said he’d gotten up at 4 a.m. at his home north of Houston to meet me in Luling. (I had no warnings of this.) He presented me with four lovely miniature wooden ducks (one is in the sipping water posture we often see in our Botany Pond ducks). What a fantastic thing to give me! (I just found out via email that they were given to my friend 25 years ago by an Argentinian dentist.) 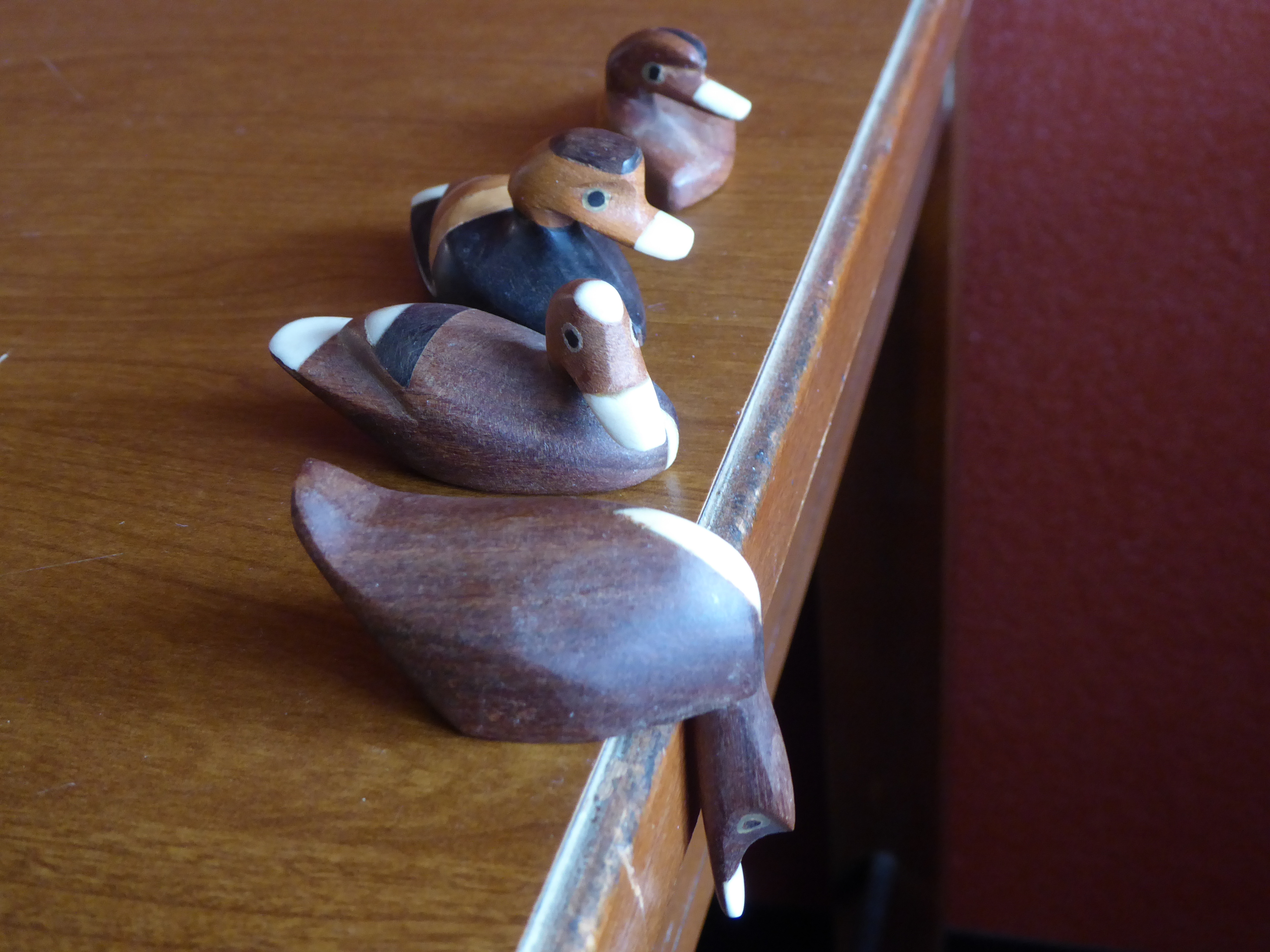 He asked if he could join me for a meaty breakfast and of course I agreed instantly. We walked inside this unprepossessing building, and could smell the BBQ instantly. 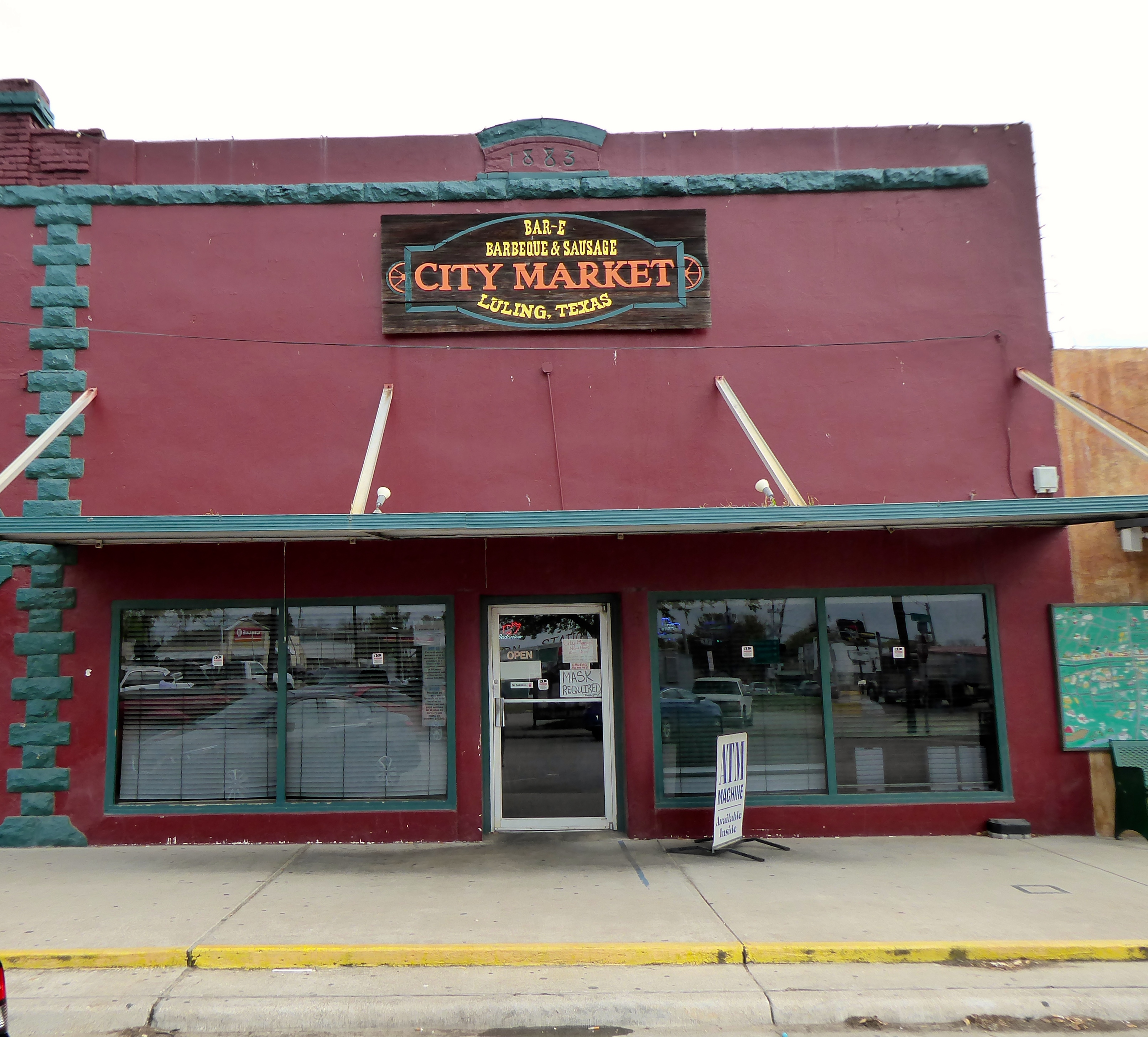 The inside. There was another guy, somewhat younger, standing right inside. I thought he worked there, and asked him how we ordered (it’s complicated there, as in many BBQ places: you order and pay for the meat in one place, and the drinks and desserts in another). It turned out that he was ANOTHER reader of this site, living an hour south in San Antone, and had independently decided to meet me.

So I got to have breakfast with two readers. How great of them to take the time to drive to Luling to say “hi”! I was very touched, and we had a nice chat. It’s a good thing I always do what I say I will, and at the time I say I’ll do it, or they might have missed me. 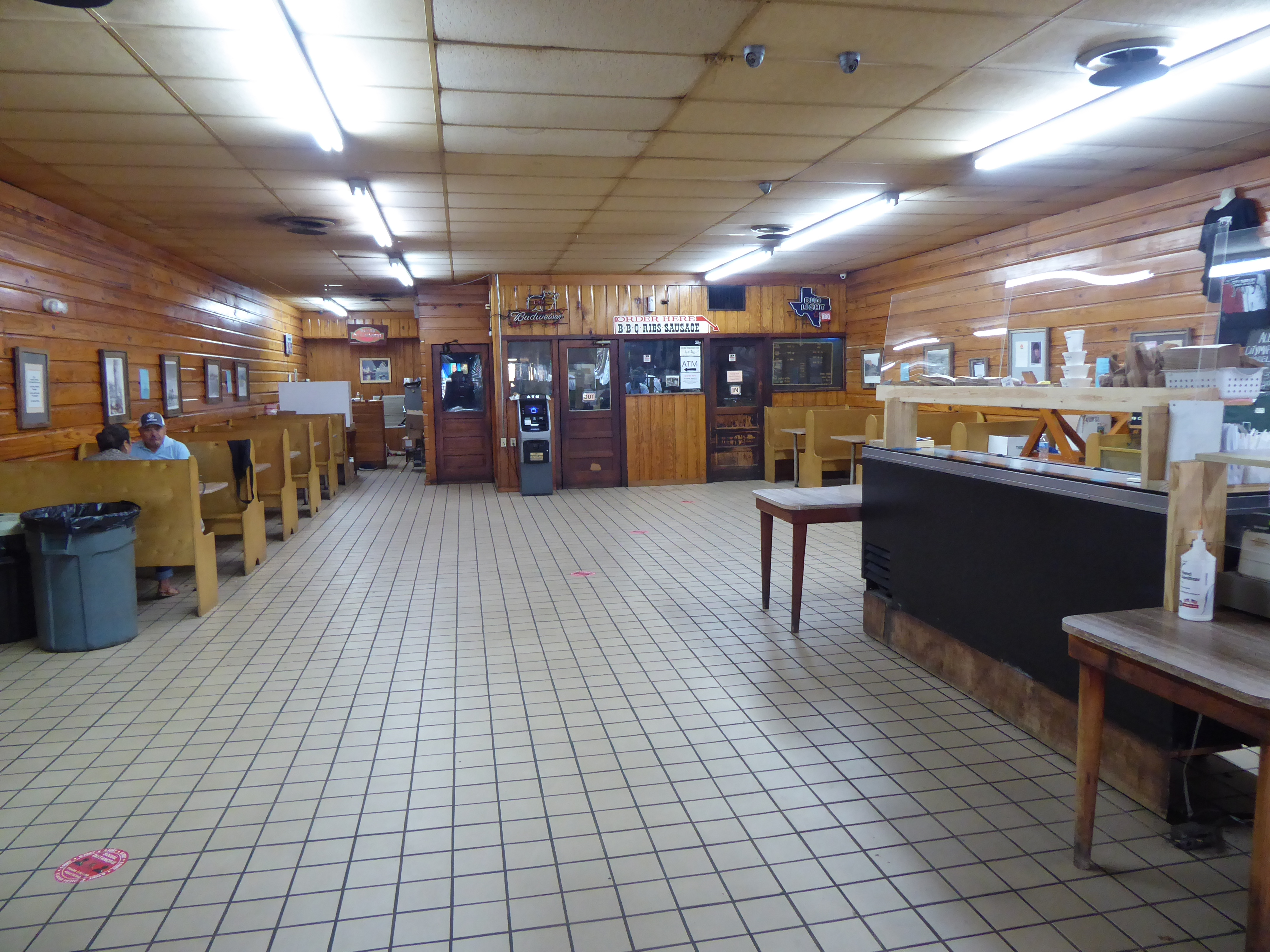 Ordering the meat in the back room. I had a sample of their specialities: brisket, pork ribs, and their famous sausage. I also had two slices of bread and a slice of raw onion. That’s all they have besides a pickle and a jalapeño pepper, but you can get beer, soda, tea, and banana pudding in the main room. 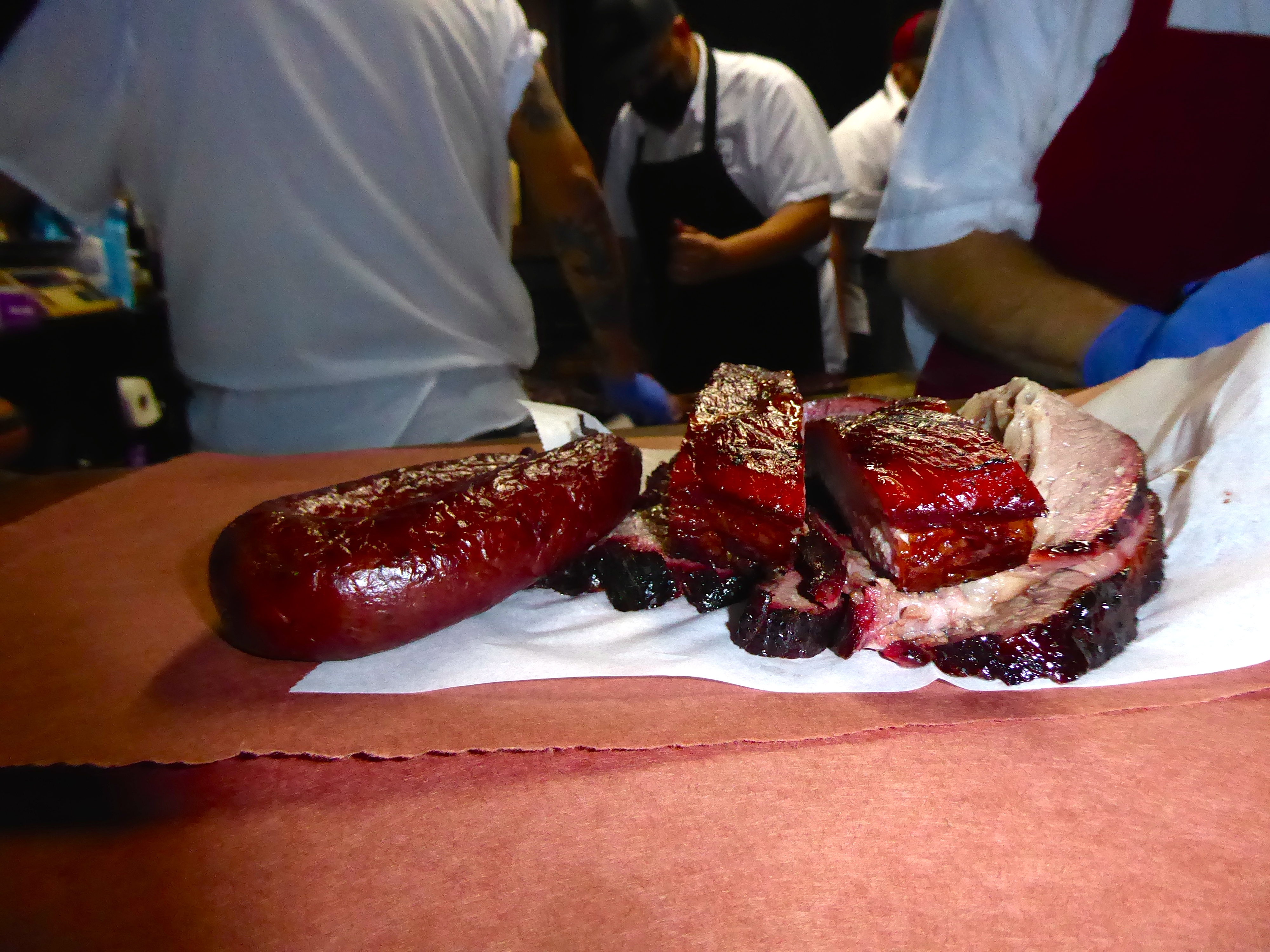 Below is my late breakfast (or early lunch): two pork ribs (superb) sitting atop a juicy (i.e., fatty) pair of brisket slices, with a sausage to the right and raw onion on the side. And, of course, sweet tea. The brisket, which I doused with the City Market’s homemade BBQ sauce, was part of a combination that still makes me think this is America’s best BBQ.

Meals are served on butcher paper, not plates, and you’re expected to eat with your hands, but they will give you a plastic knife or fork if you ask. 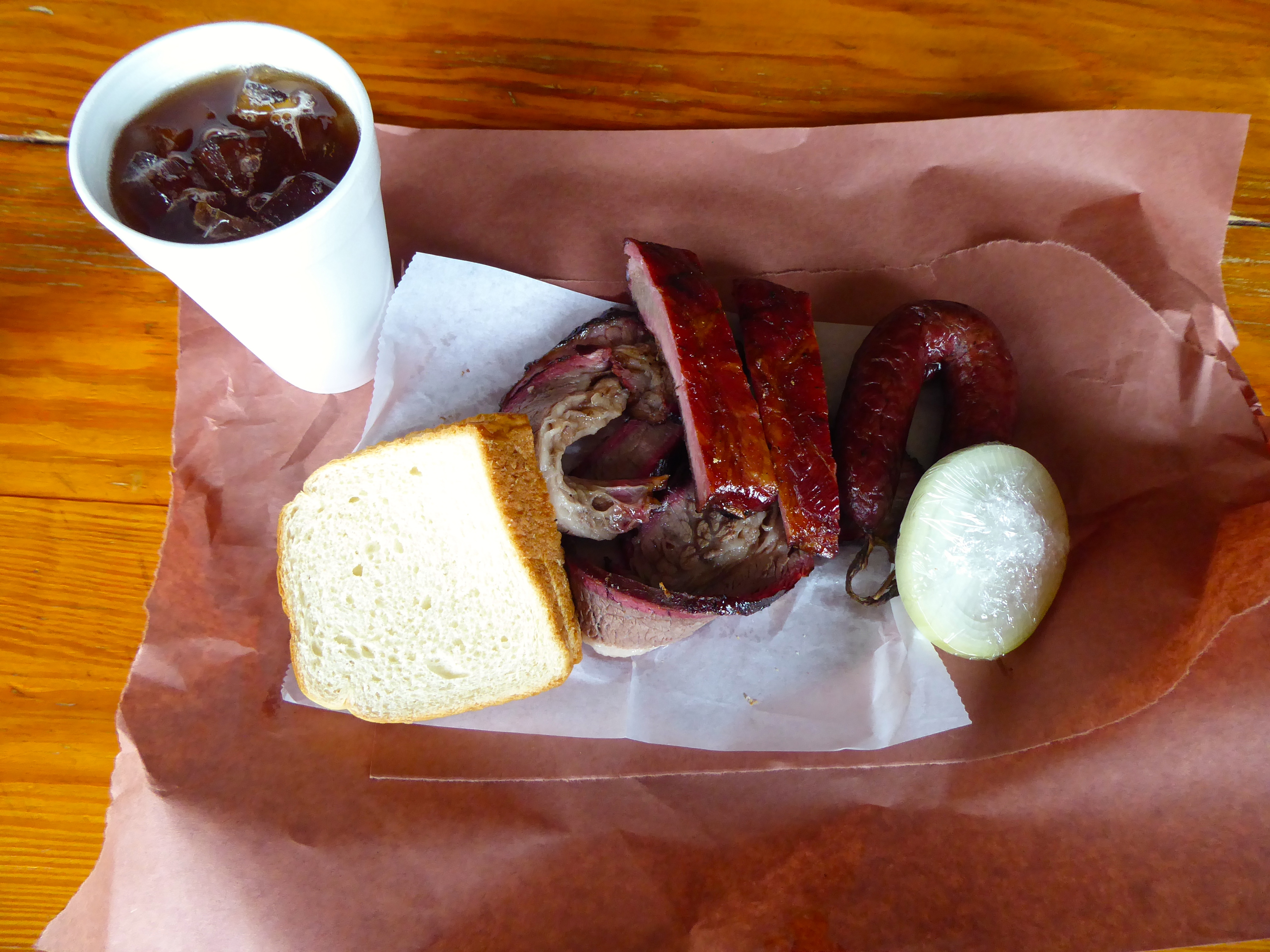 My newfound pals, neither of whom had eaten there before. They both became instant fans of the BBQ and both ordered some extra to take home. Guys, if you want me to give your names, email me. 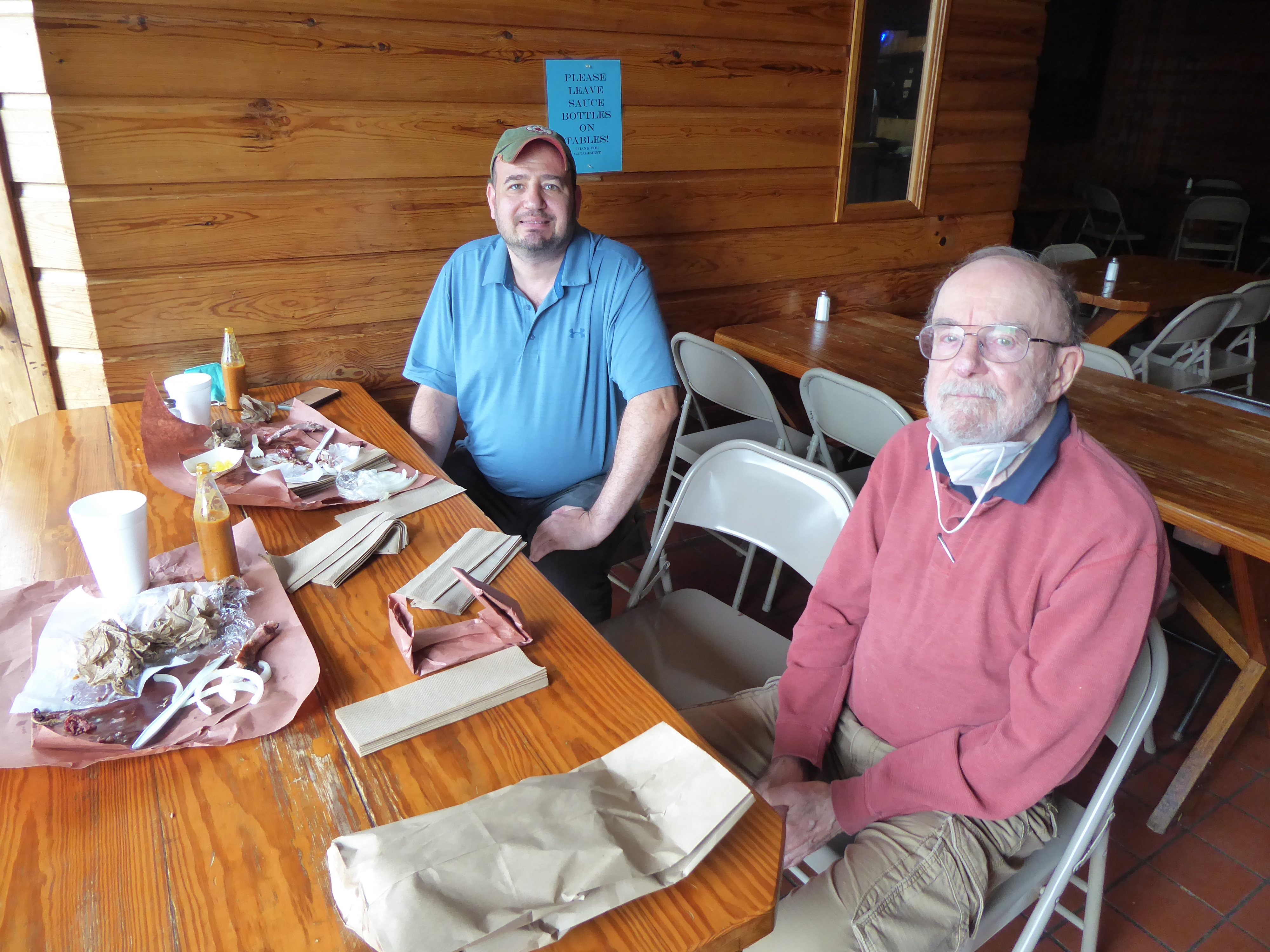 The guy who brought me the ducks also brought his dog and his leash-trained cat, named Sagan (after Carl), to meet me. (He said they both travel well.) I got a good cat fix, petting Mr. Sagan. Note the liberal stickers on his car; he’s also a pro-masker and an atheist, so I’m surprised he’s still alive in Texas! (He’s not from Austin, a blue area.) 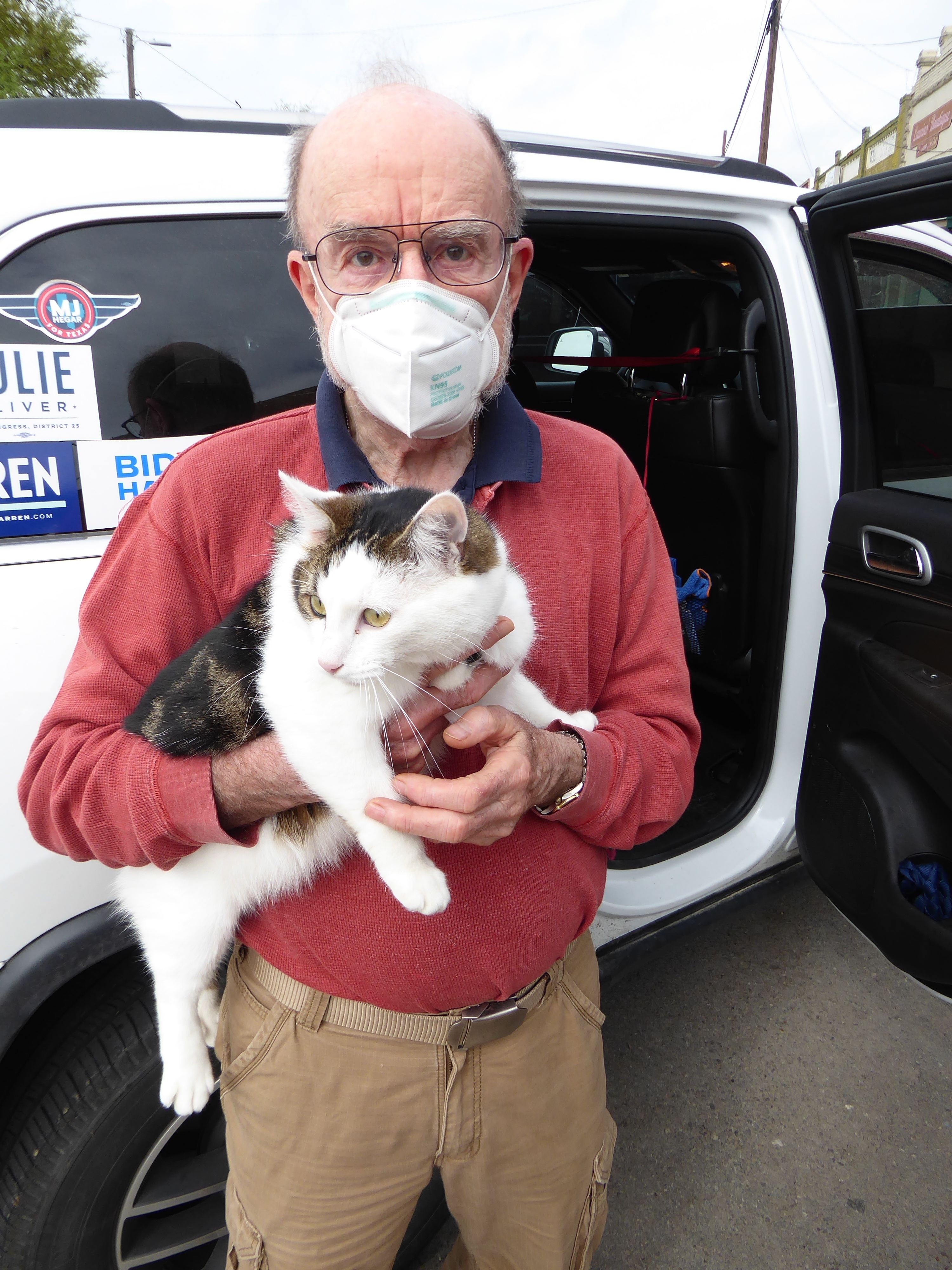 From Luling it was about an hour and 15 minutes south to San Antonio. I had three hours before I checked into my cheap motel, so I took a walk downtown to visit the area, the famous River Walk, and the Alamo.

I was pleasantly surprised by the old Art Deco architecture downtown, as well as by lots of original stores with their original signs, and many old theaters.

Some buildings (I know not what they are): 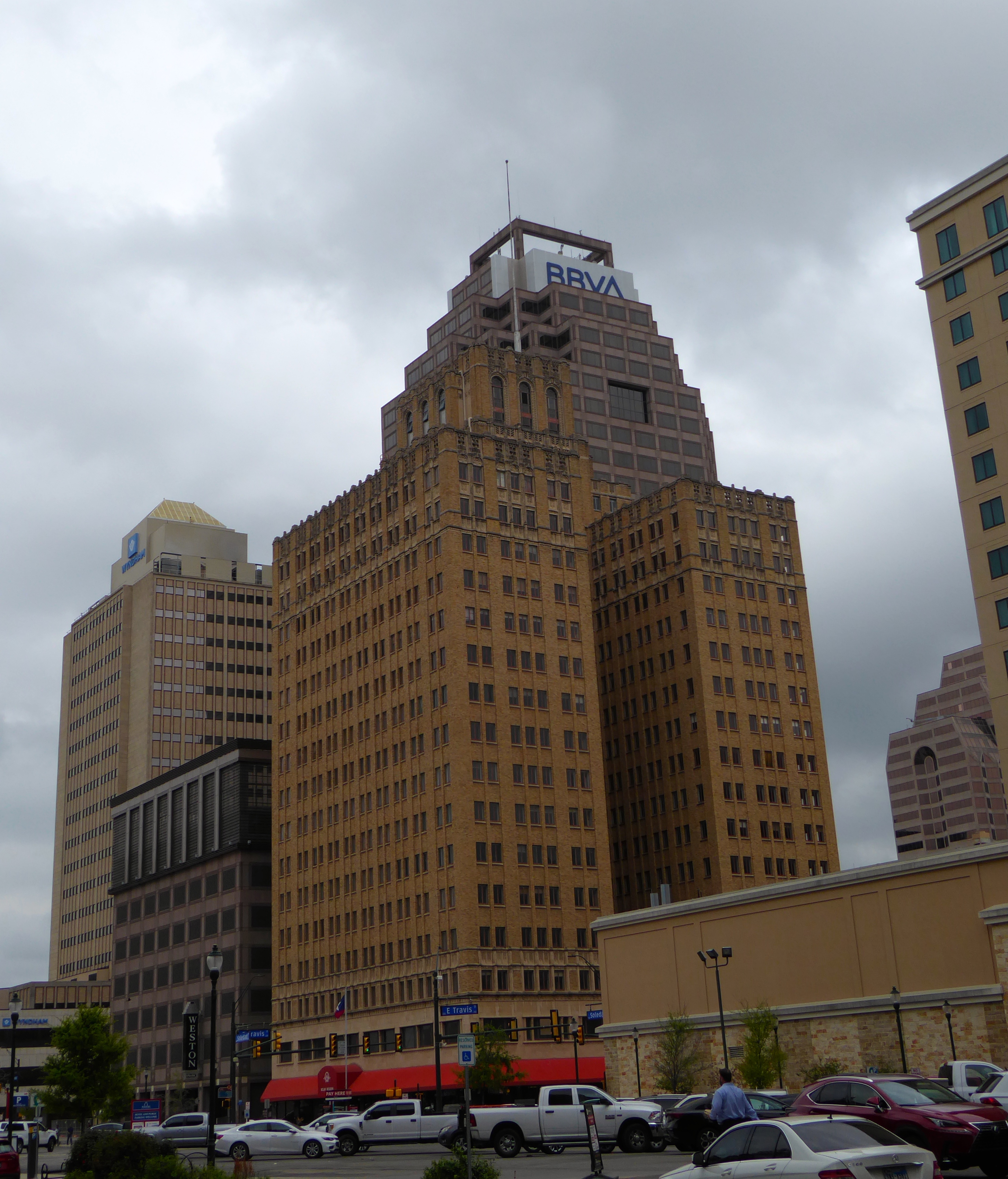 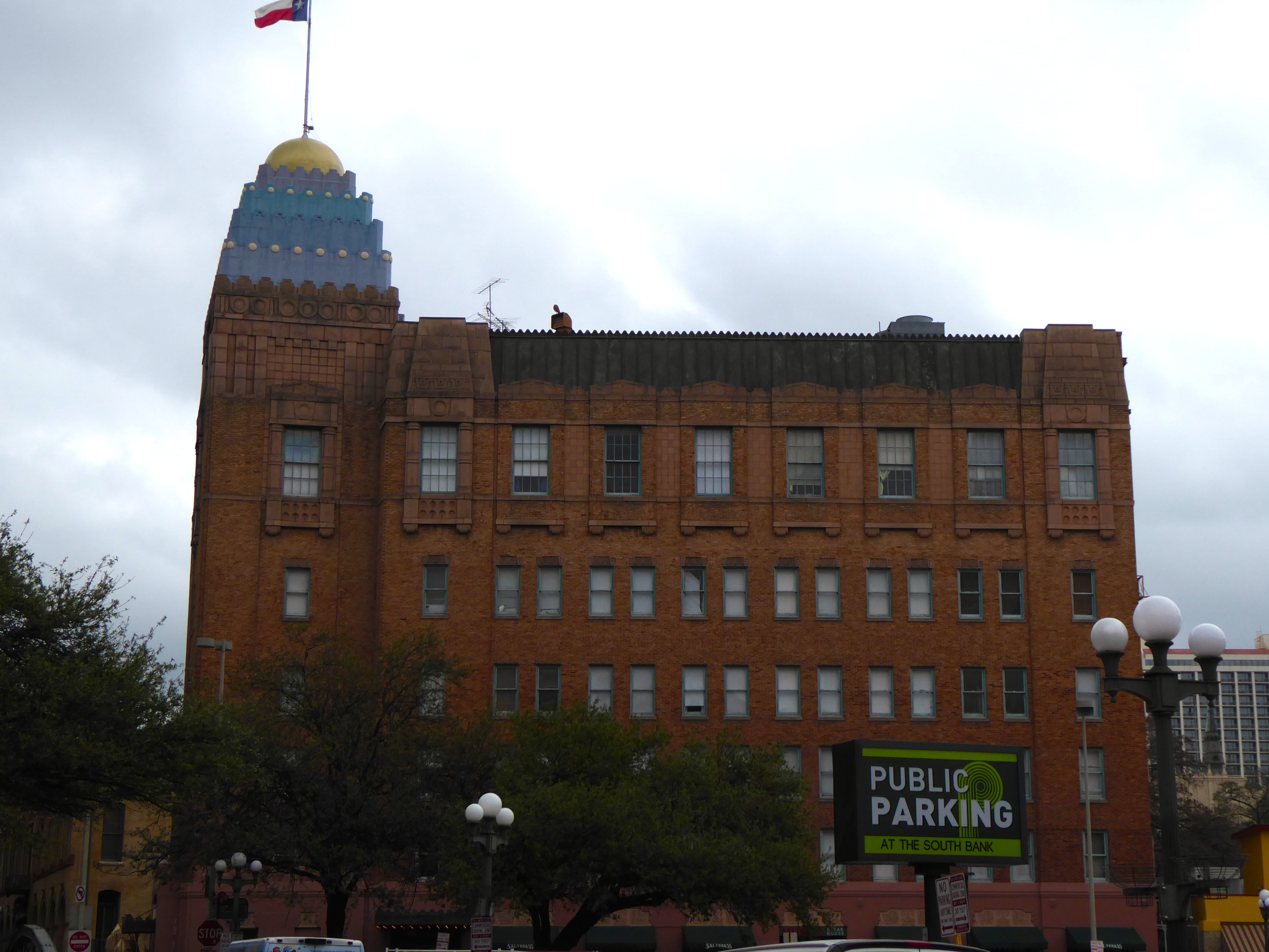 Front view of the building above; 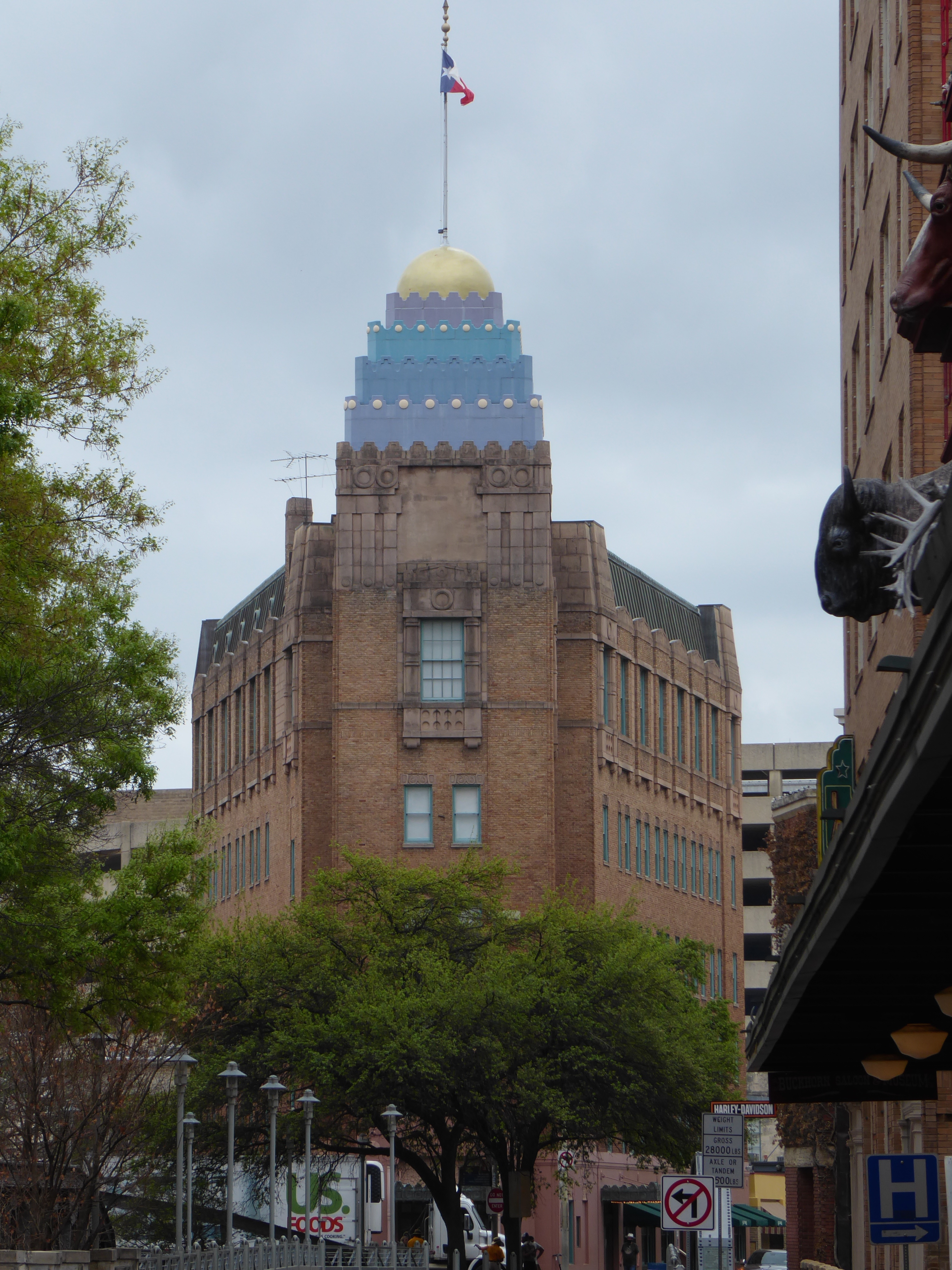 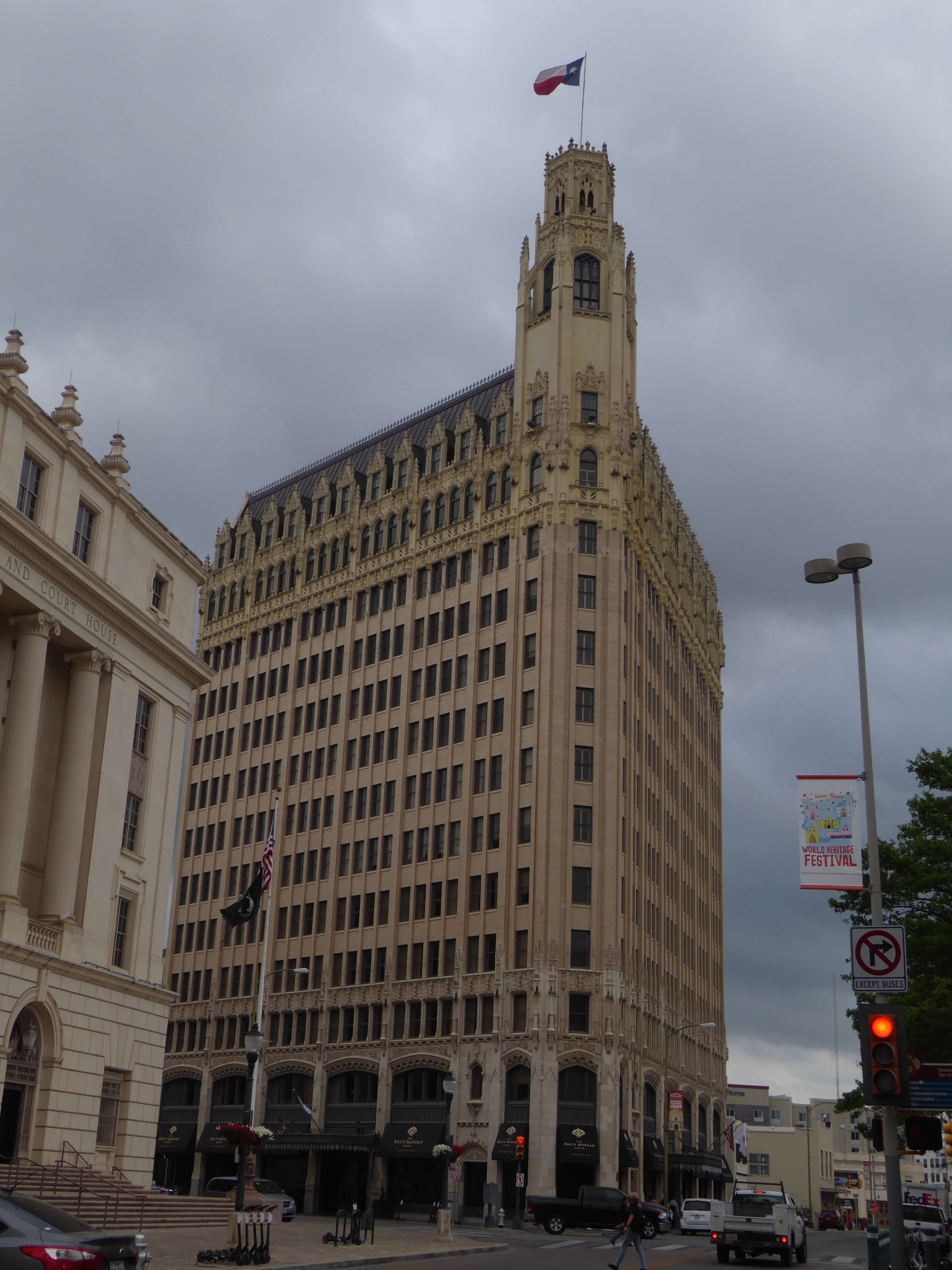 Nowhere but in the South could a hotel bear this name: 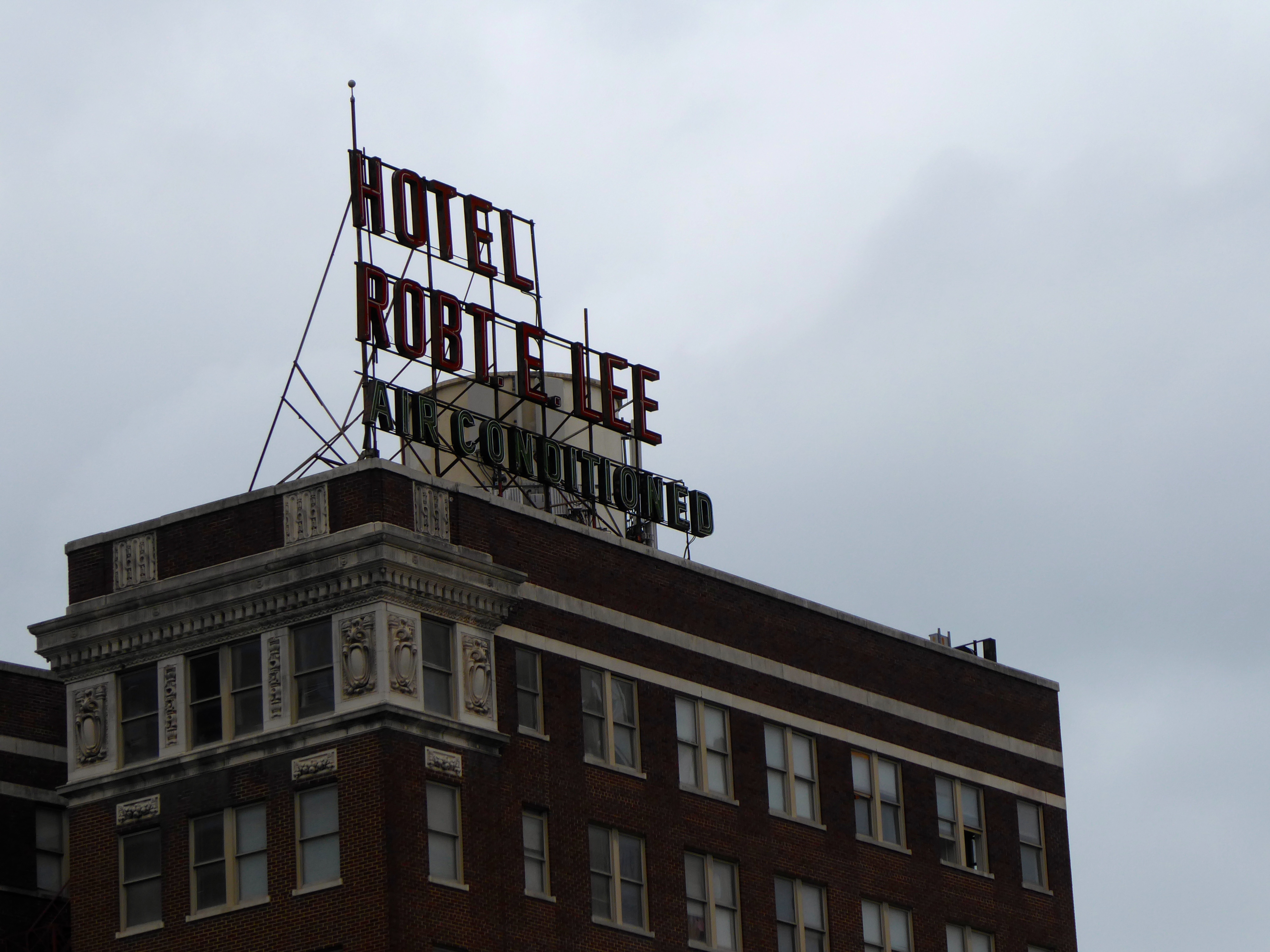 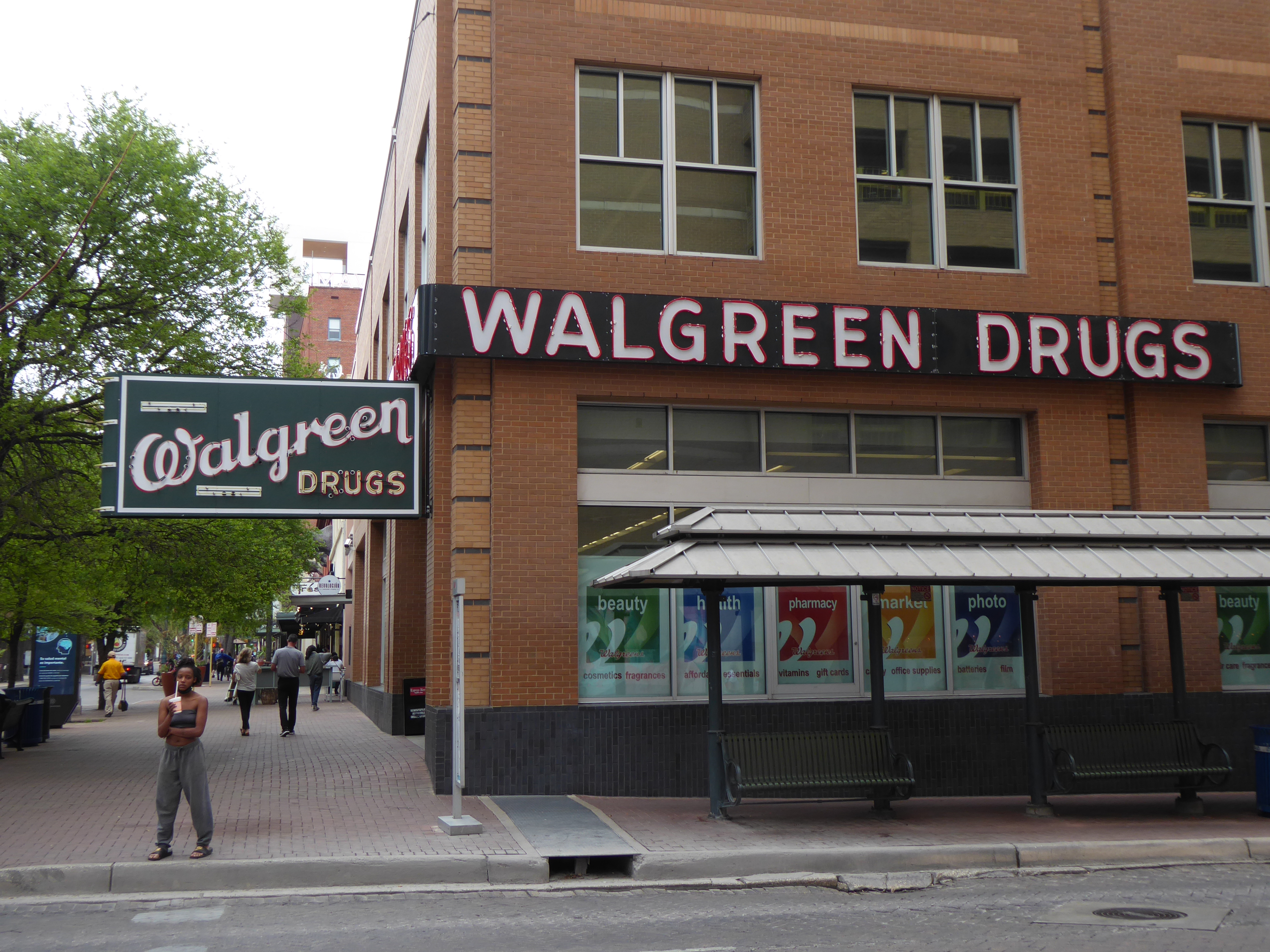 And where do you find big hat stores any more? Here’s Paris Hatters. They specialize in cowboy hats like Stetsons, as this is cowboy country. 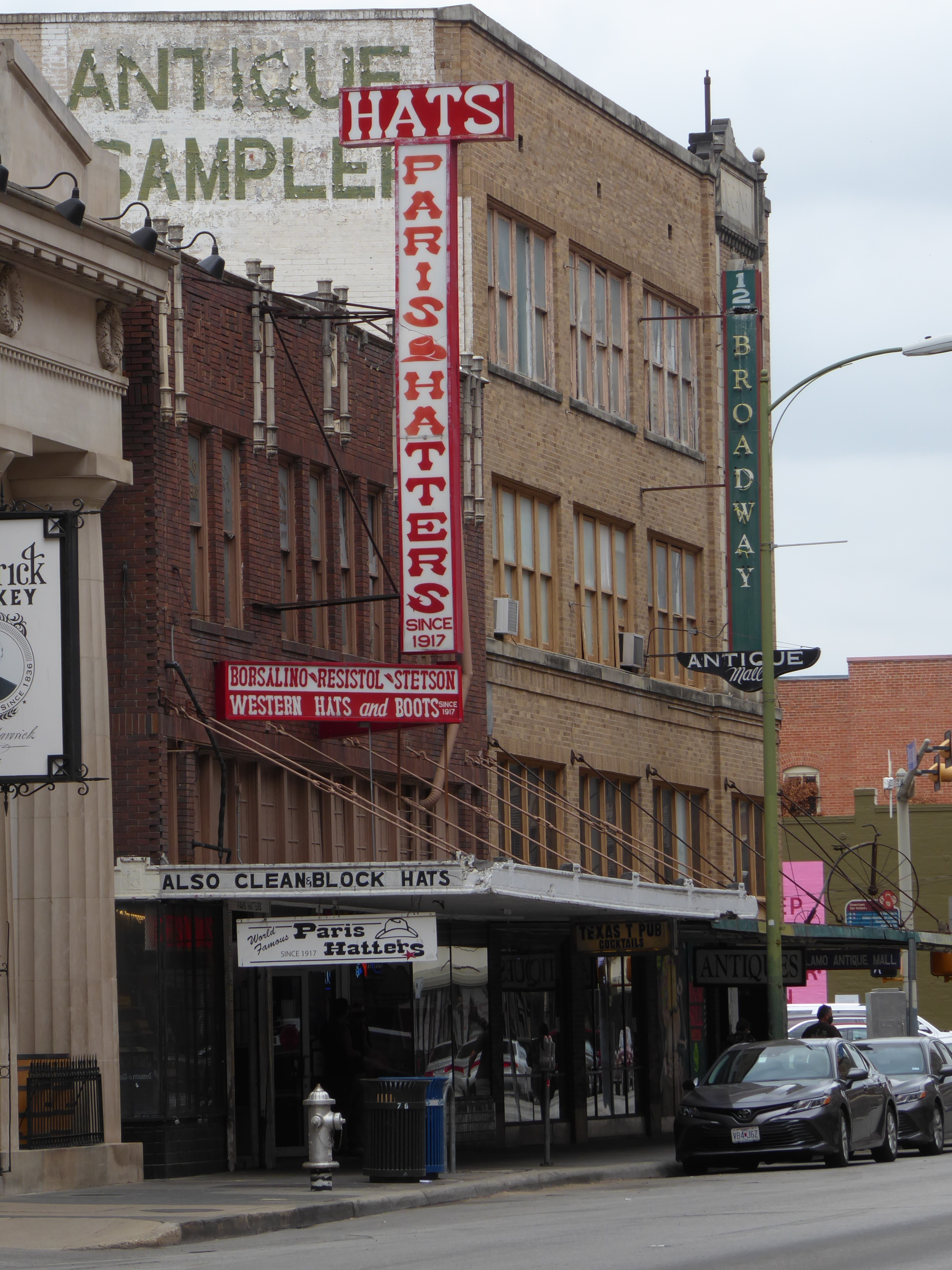 Just within a few blocks I found lots of old theaters with their original signs. Sadly, they’ve all been closed for a year. 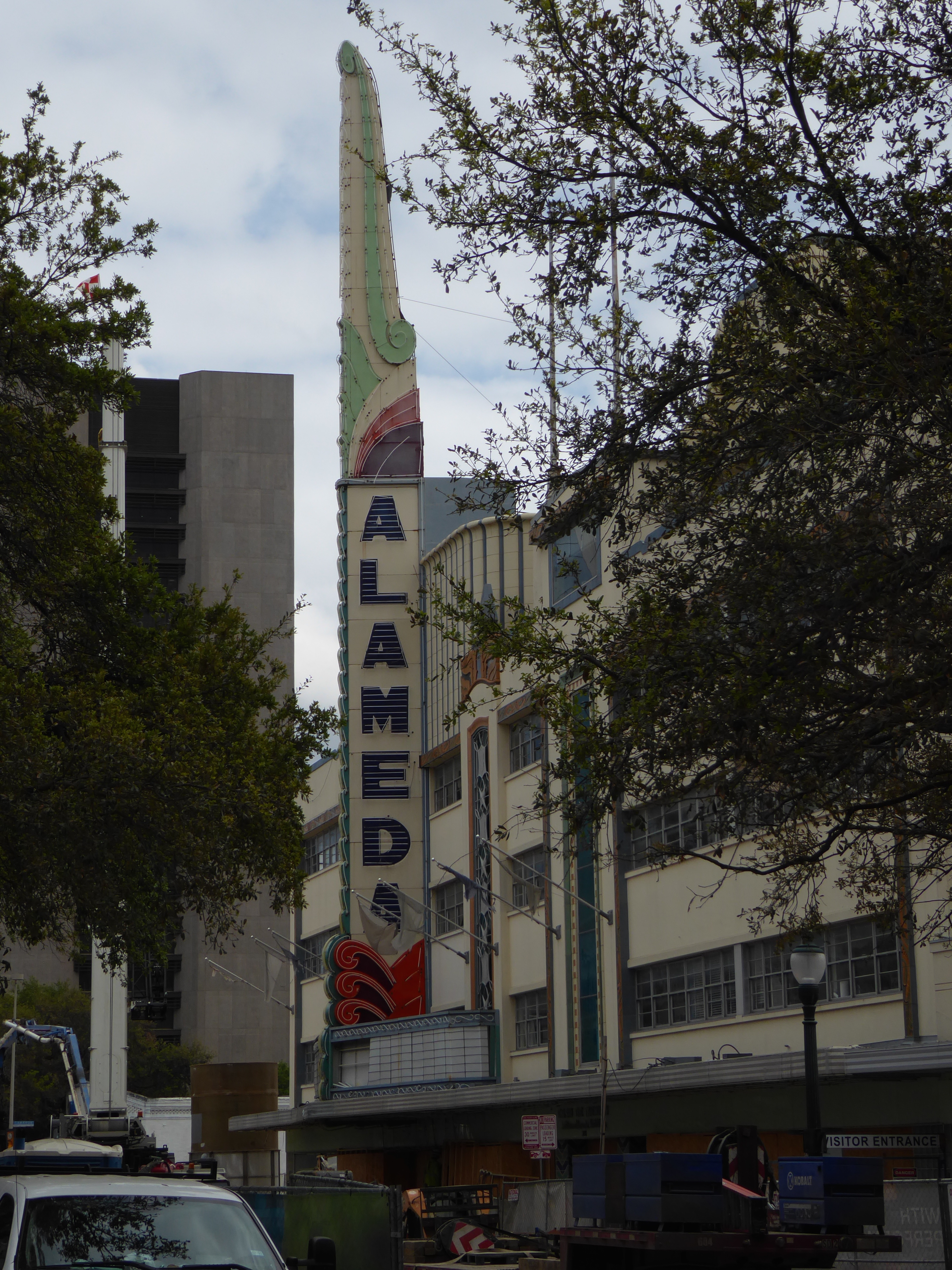 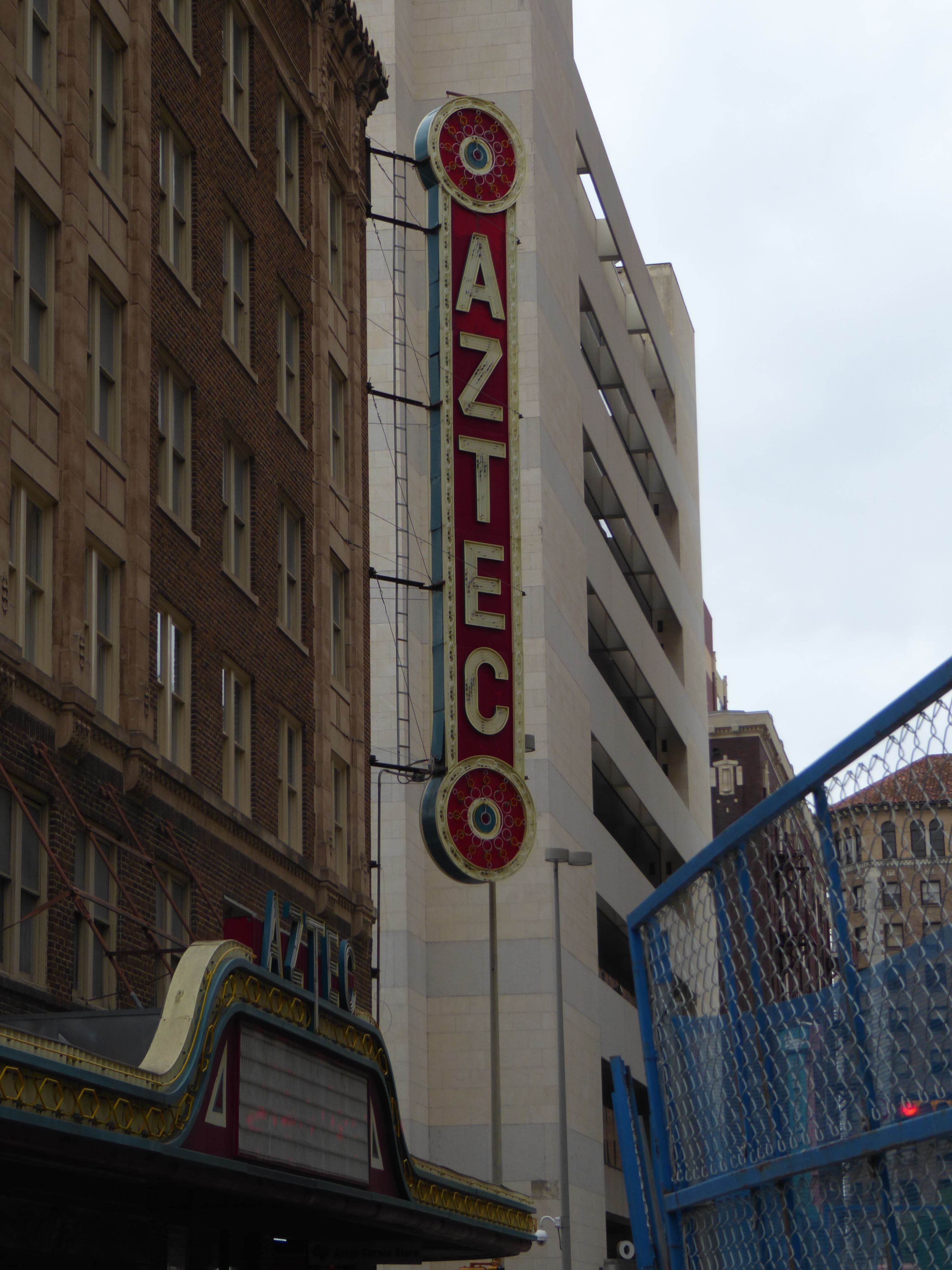 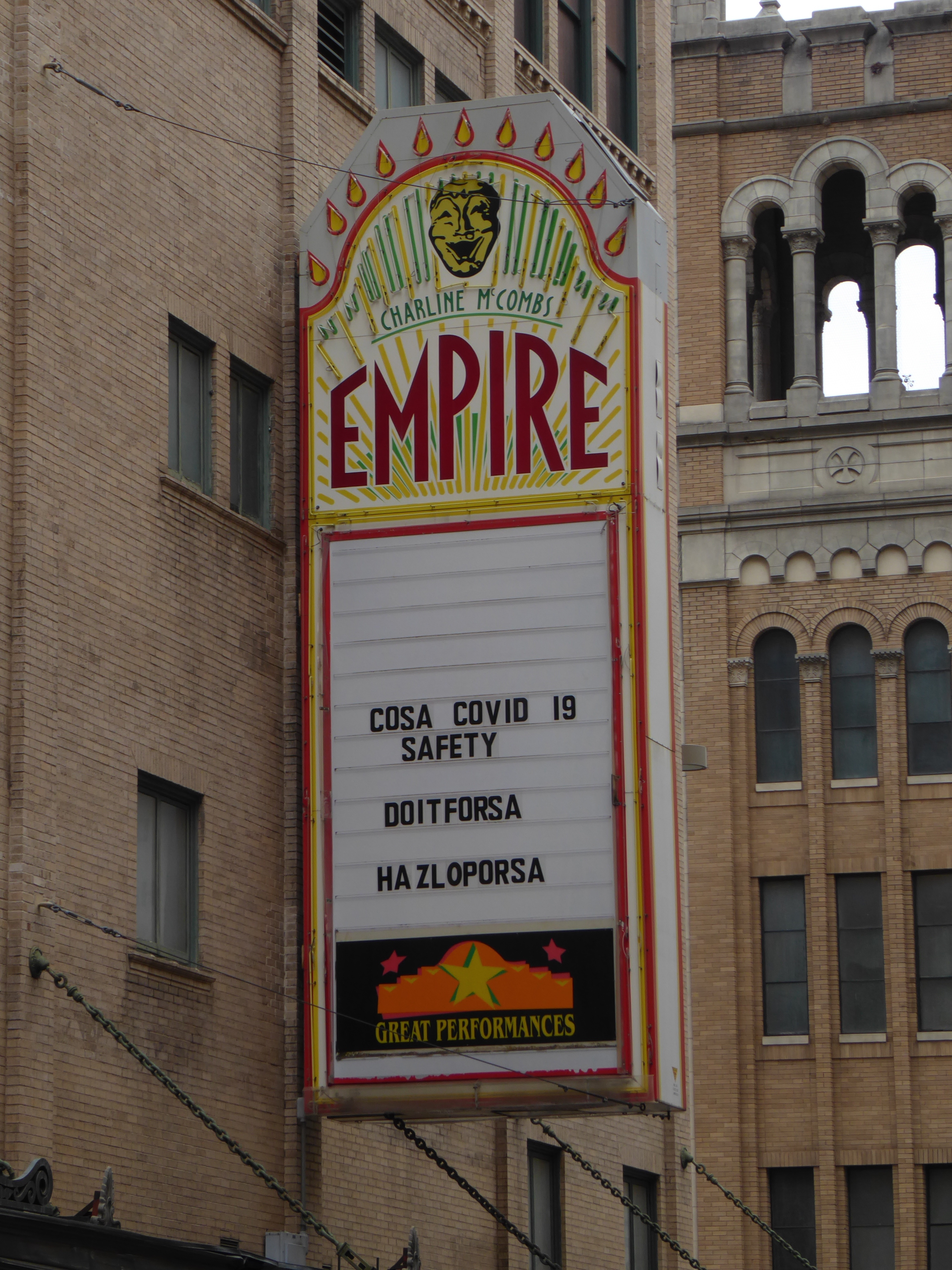 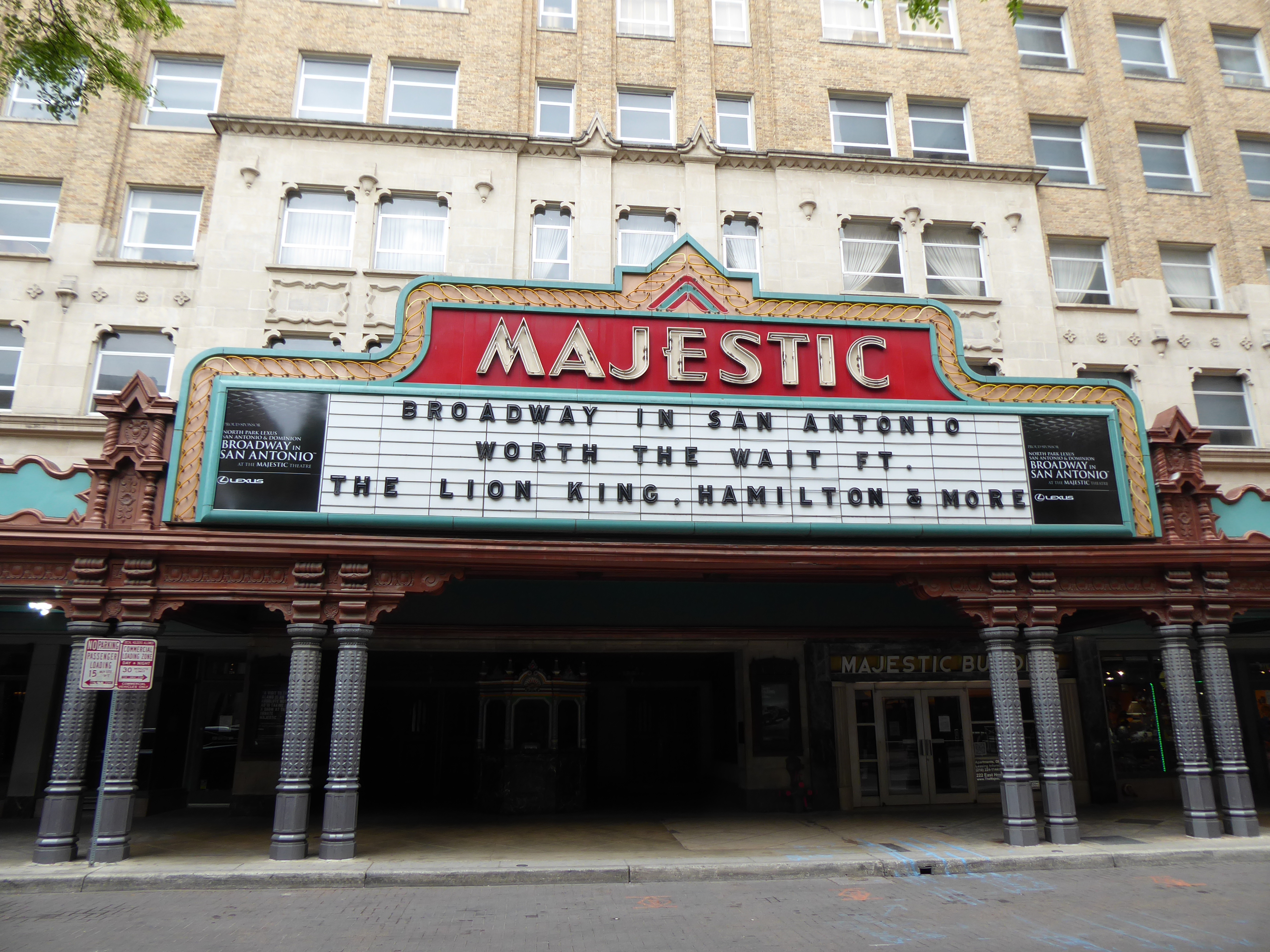 An old original ticket booth in an abandoned theater. I’m reflected in the window. 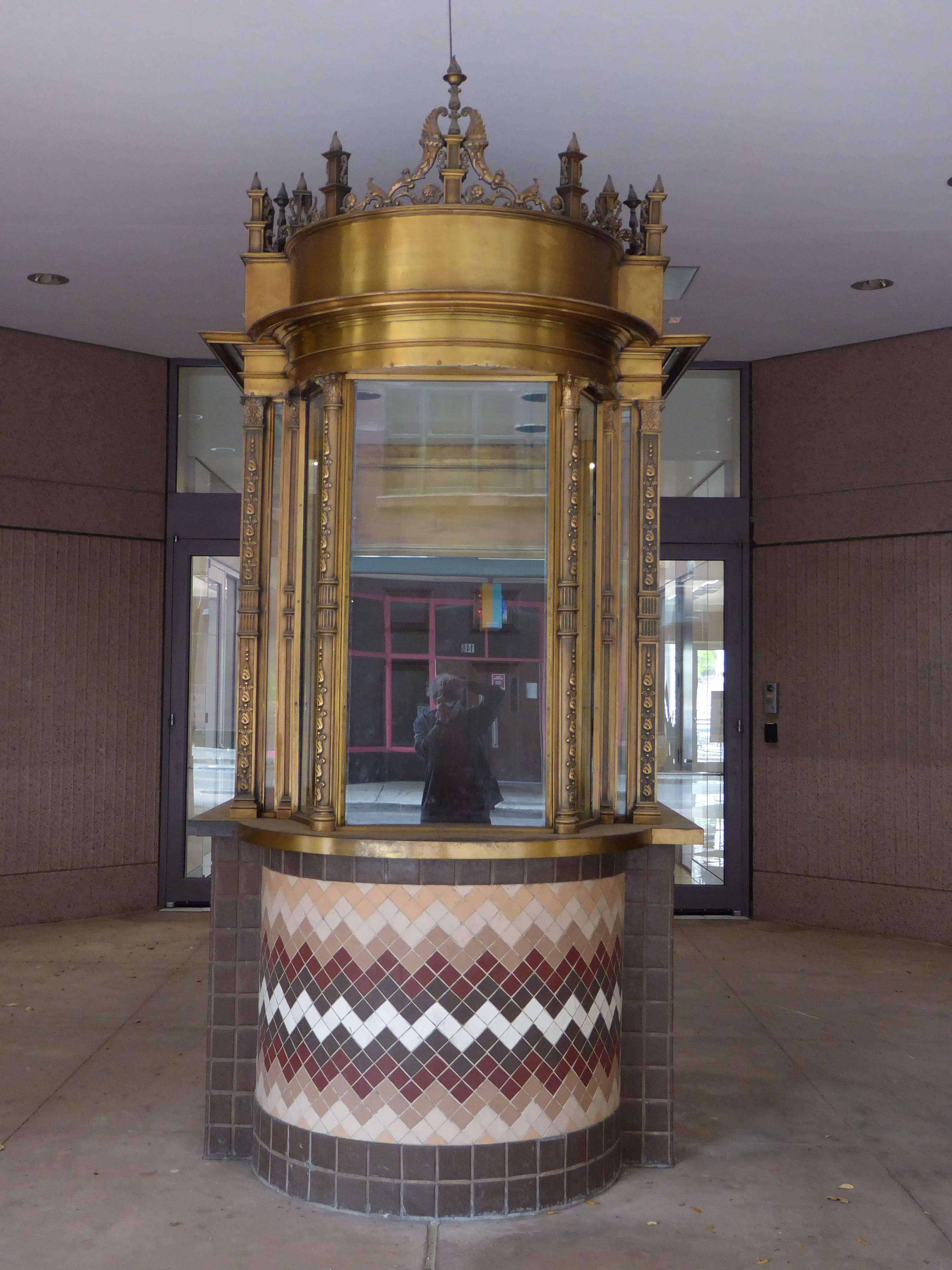 The famous River Walk, built along the San Antonio River from the late 1960s through the late 1980s. It’s peaceful, with all the touristy stuff on the streets above, and you can take barge tours down the narrow river. 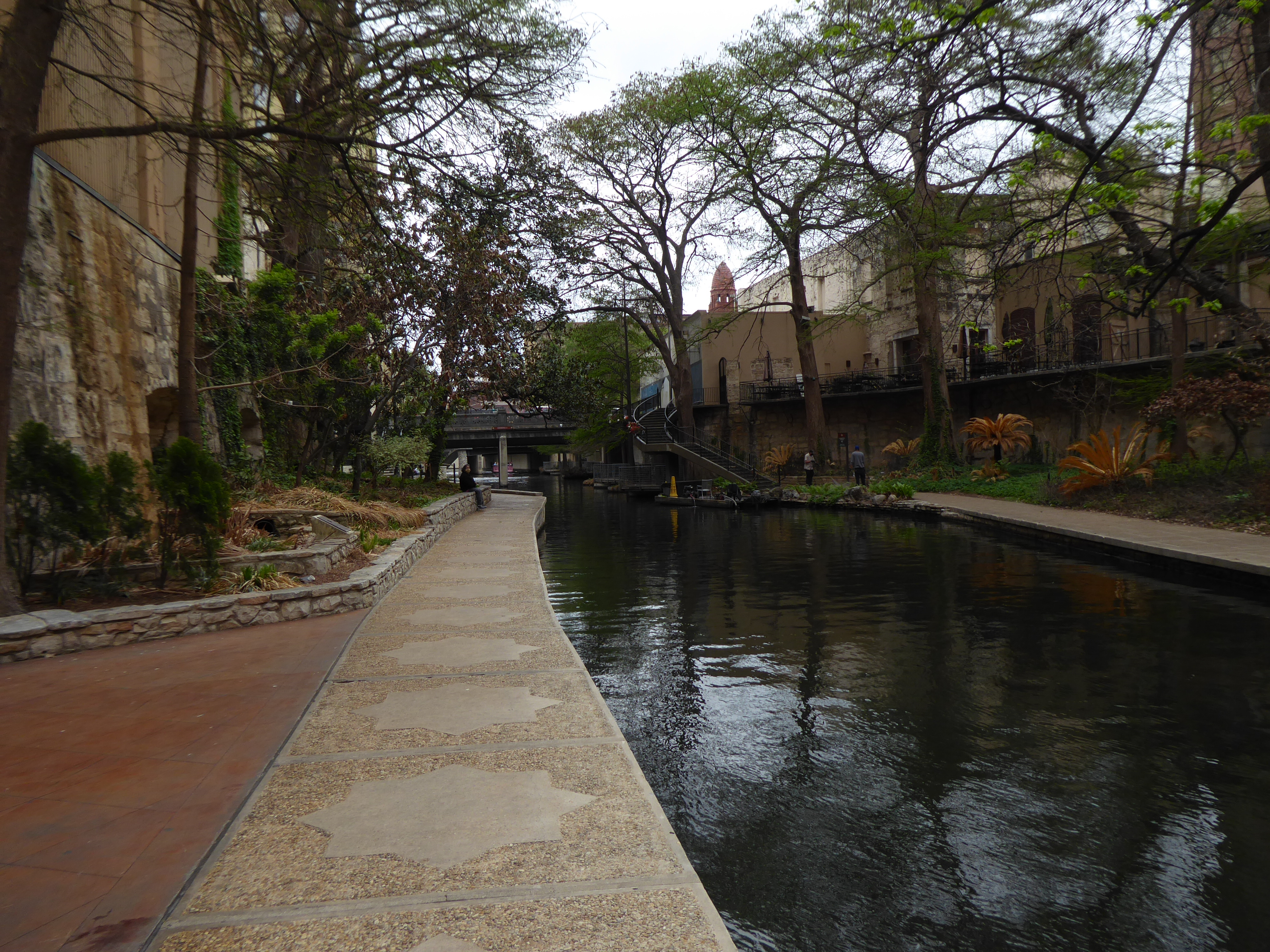 The River Walk also leads to the most famous building in Texas: the Alamo, It was originally a Spanish mission built in 1824 and called Misión San Antonio de Valero. Its grounds were quite extensive, and housed a whole community of priests and native Americans, who lived and worked on the grounds. What you see below is actually the church of that mission; much of the rest has been destroyed, especially in the great battle between Mexicans and American colonists in 1836.

You can take tours of the inside, but they were all booked up yesterday. I was happy enough just to see the famous facade. 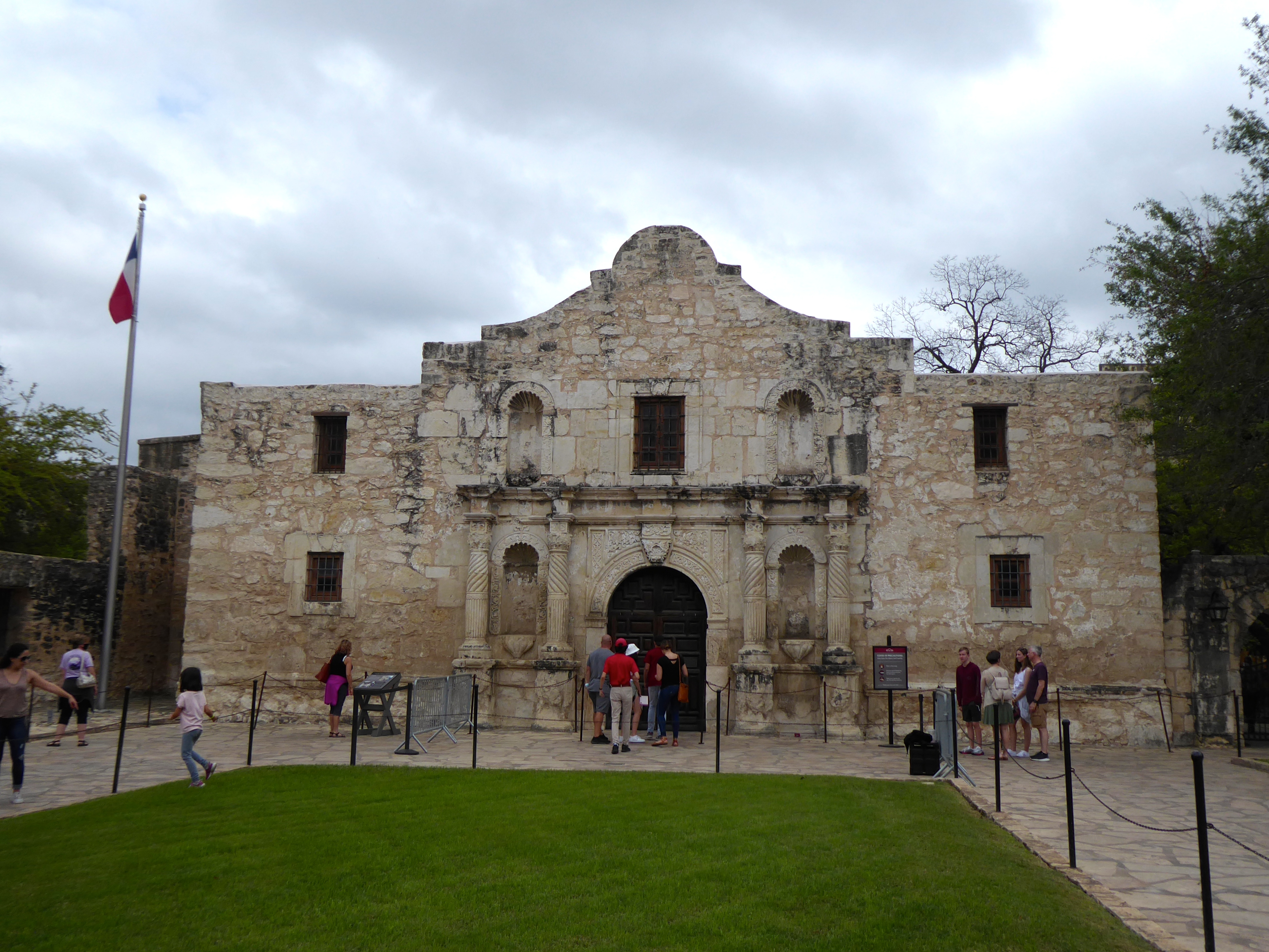 The Battle of the Alamo lasted less than two weeks, from February 23 to March 6, 1836, as the Army of President General Antonio López de Santa Anna of Mexico besieged the structure and the Texans (who claimed the land for their Republic) and Tejanos inside.  On March 6, the Mexicans scaled the wall and slaughtered nearly everybody inside, including William B. Travis, James Bowie, who gave his name to the famous knife, and, of course, Davy Crockett, King of the Wild Frontier. 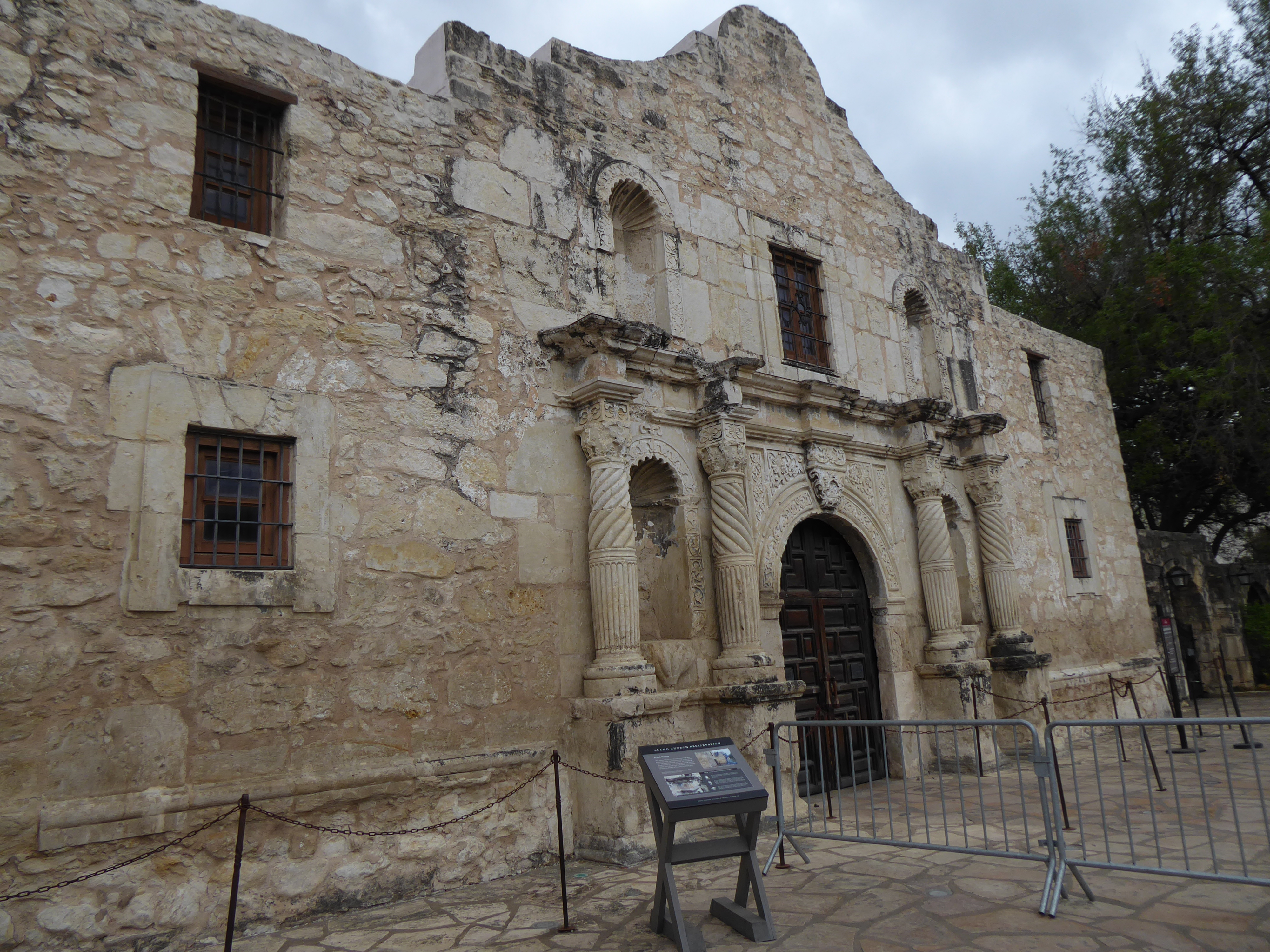 The famous battle cry “Remember the Alamo” was used by Texas troops in the the Mexican-American War of 1846-1848, when U.S. troops defeated the Mexican Army.

A cannon barrel from the Battle of the Alamo, placed on a reconstructed carriage. 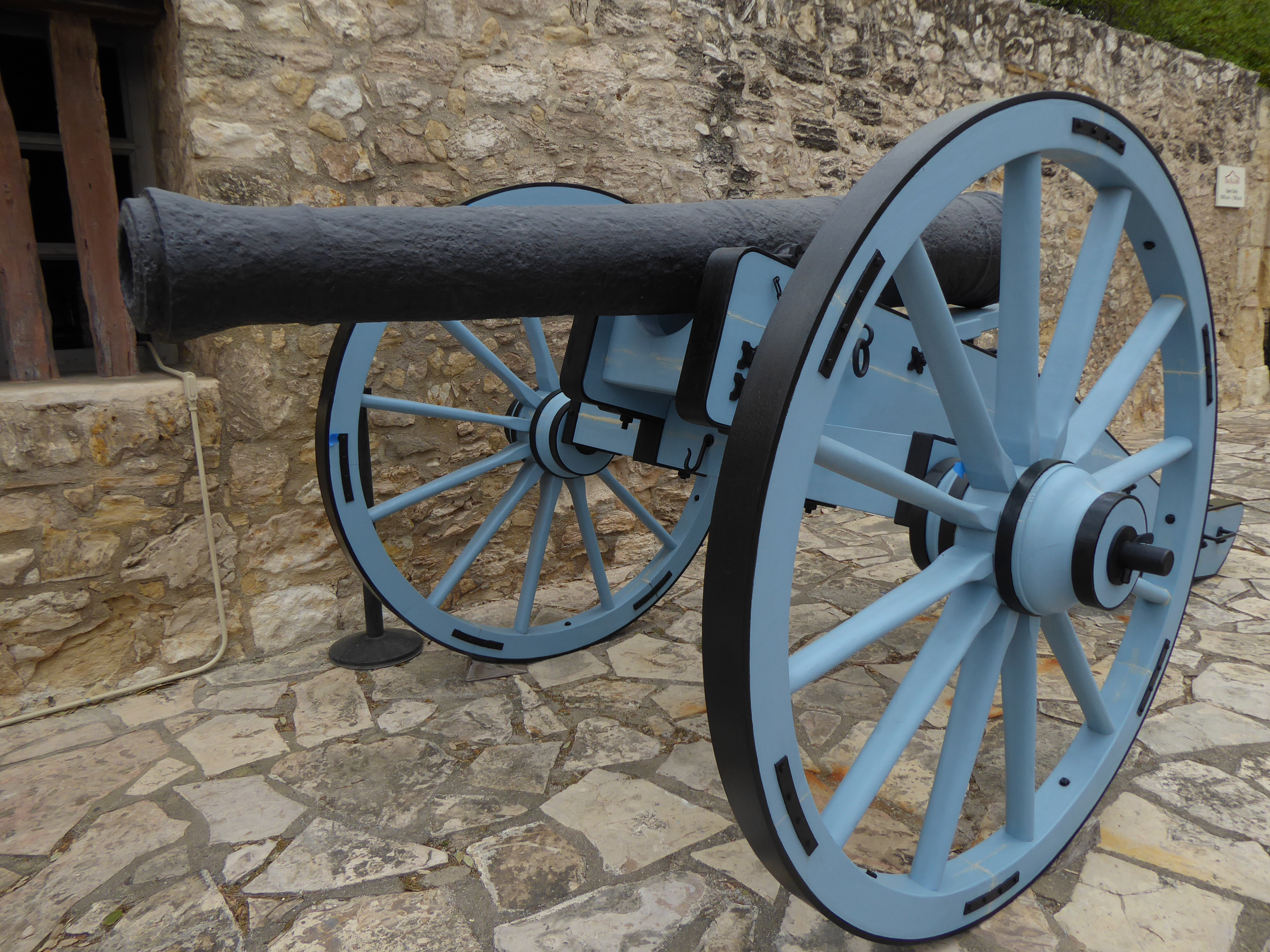 A statue of William B. Travis, commander of the Republic of Texas and of the troops at the Alamo. He was killed in the battle; only a dozen people, mostly women and children, survived. The rest were killed on the spot by the Mexican troops or executed later. 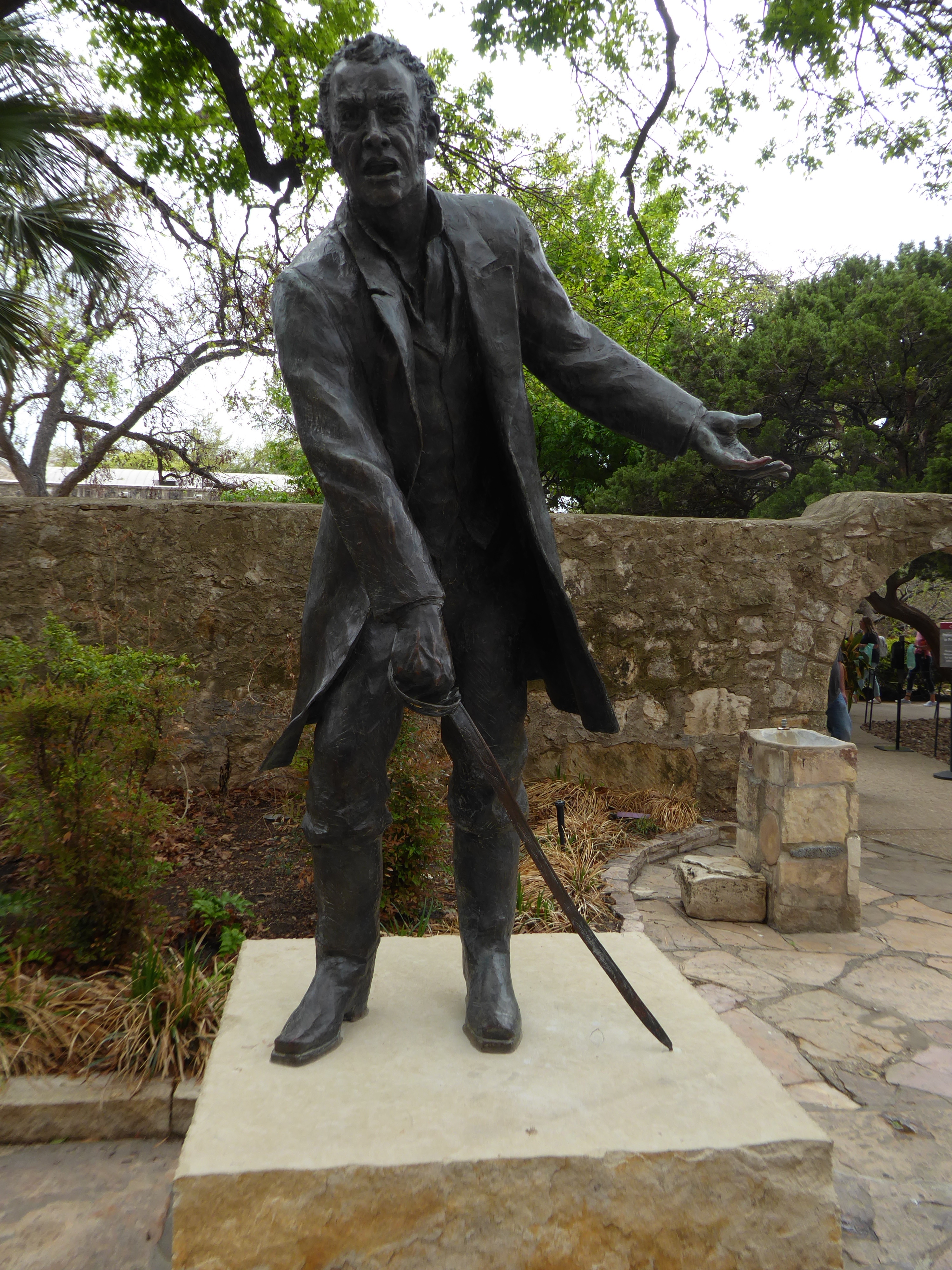 Davy Crockett with his frontiersman garb and coonskin hat. (Yes, I had one when I was a kid because of the famous Disney television series.) 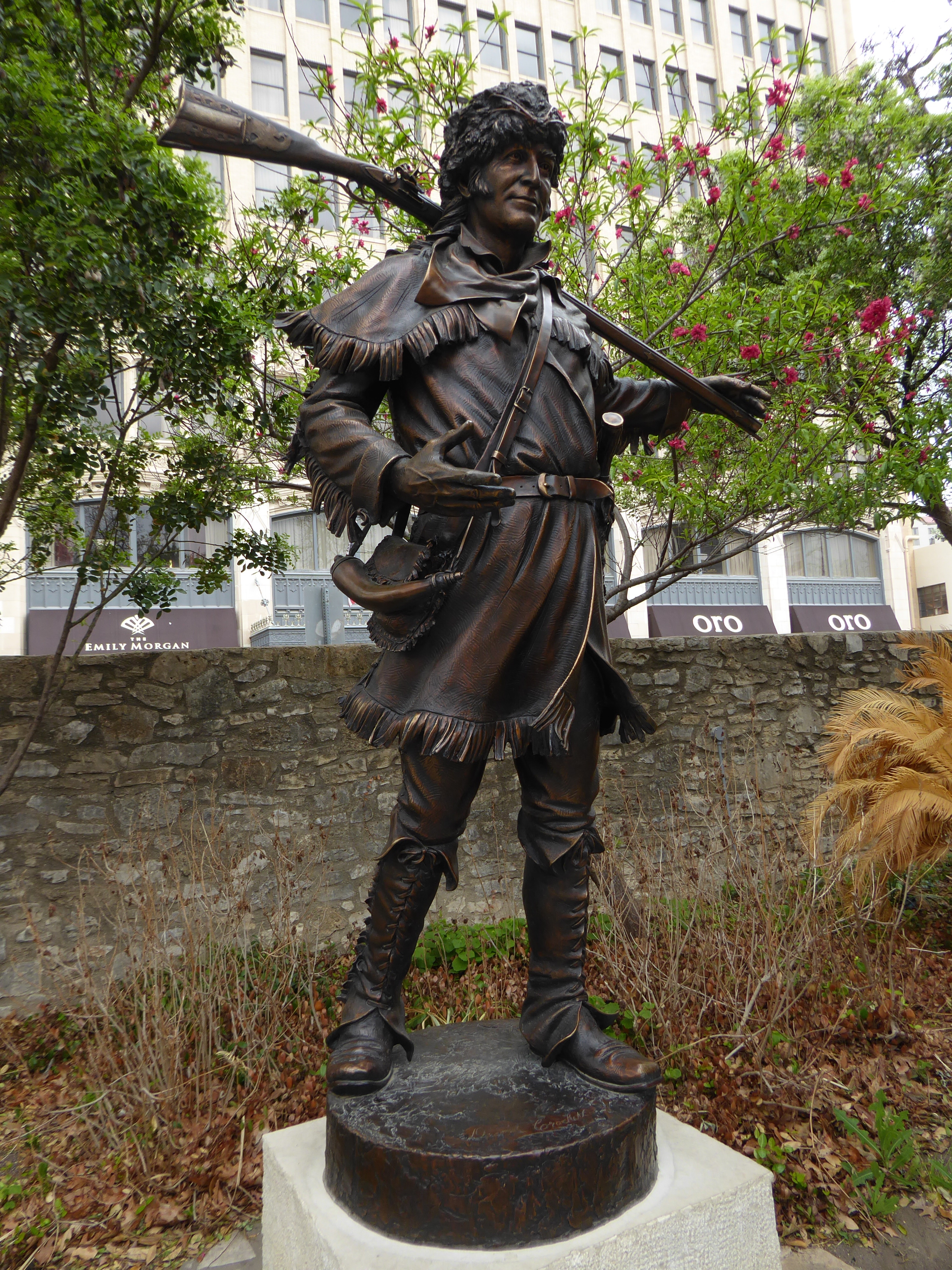 Davy has an eponymous hotel nearby. 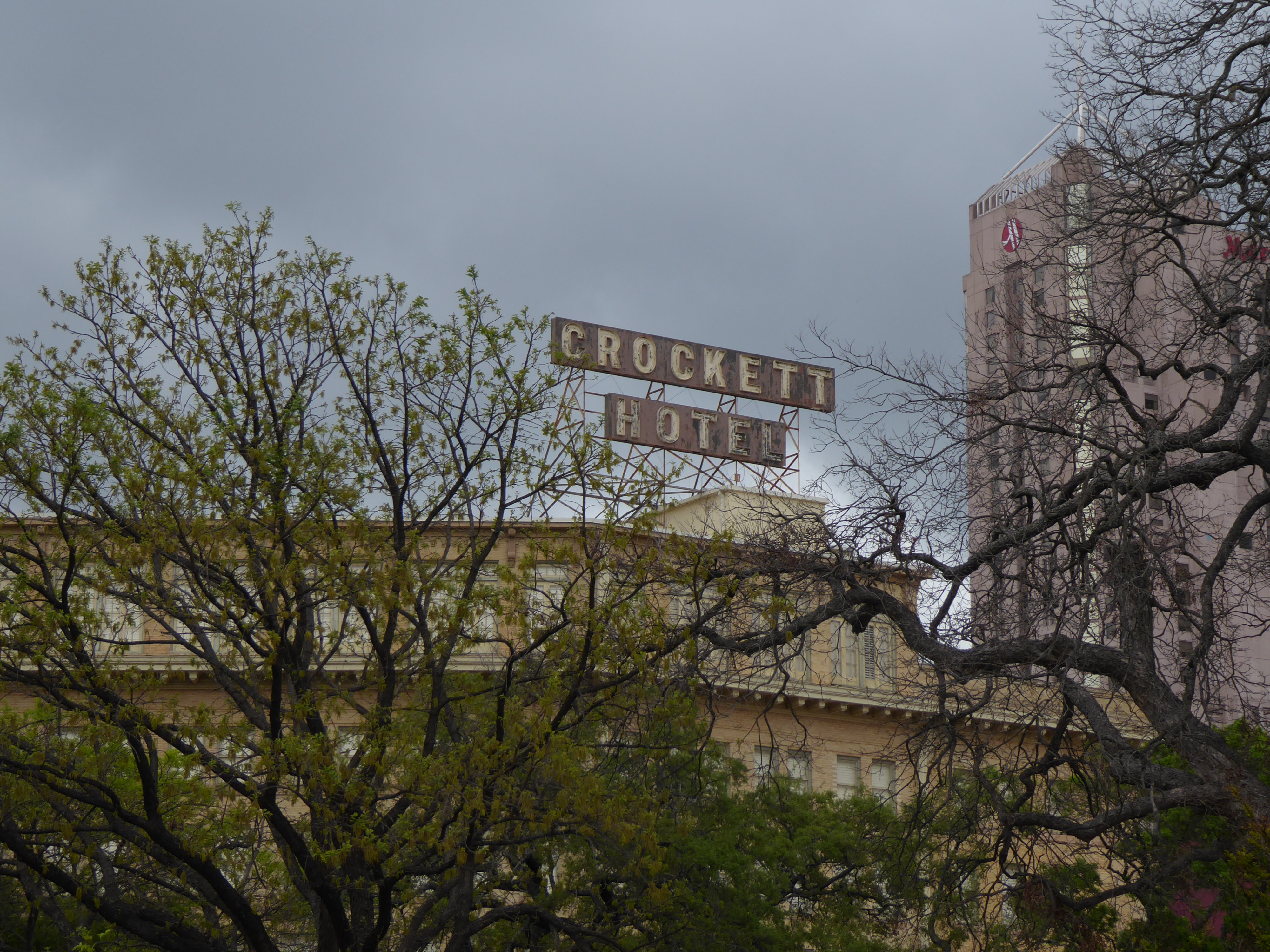 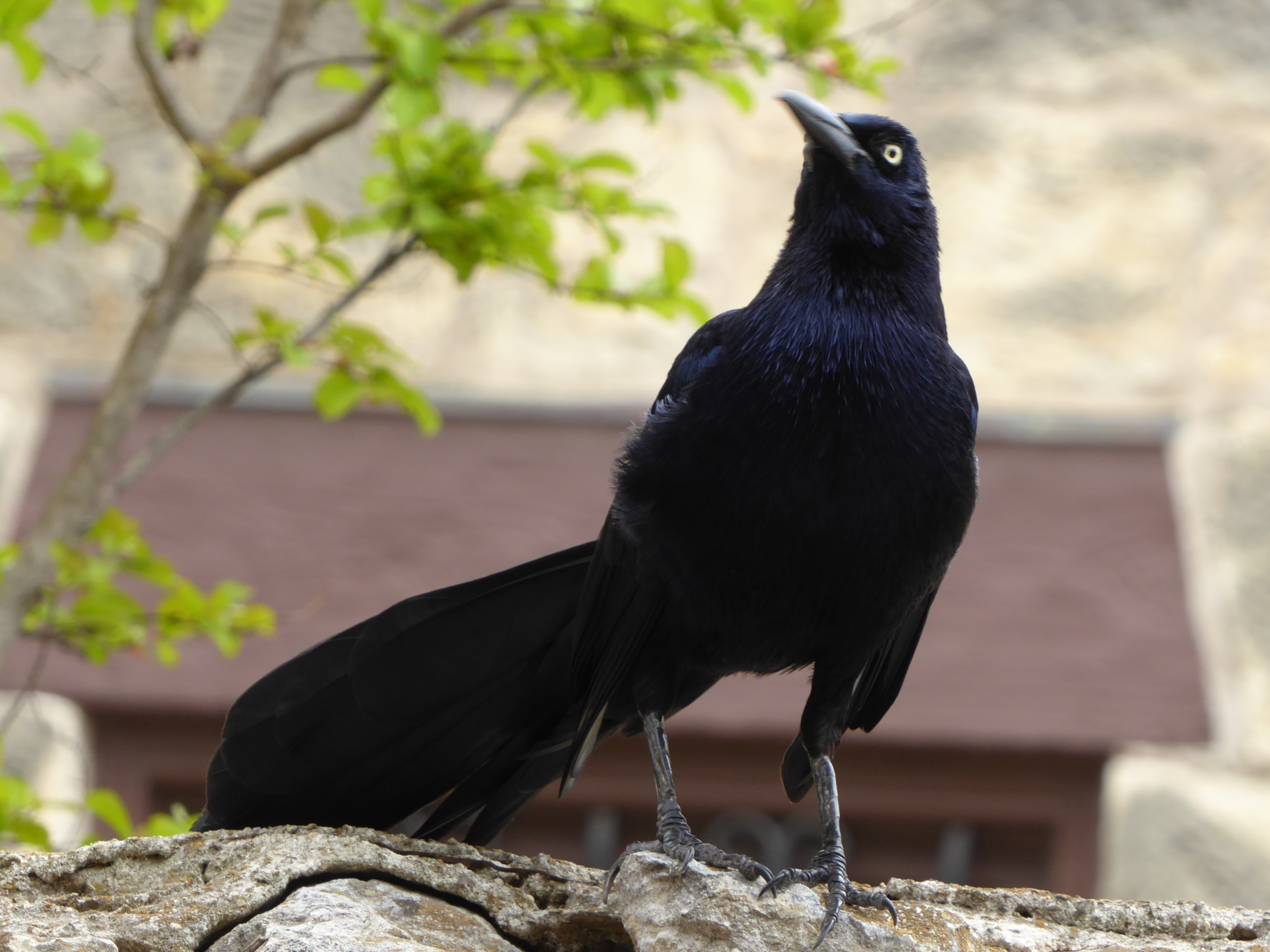