It may be my “glass half empty” view of the world, but Joe Biden, while proving an infinitely better President than Trump, still is doing some things that disturb me. And I don’t feel that we have to praise everything Biden does now that he’s been elected on the grounds that we should just shut up—after all, Trump is worse. Kvetching is always justified, no matter who’s President, for we haven’t had a perfect President.

One of Biden’s bad moves, mentioned very briefly by Andrew Sullivan in his column below, is the new administration’s proposal to dismantle the Title IX provisions for adjudicating sexual-assault cases, provisions strengthened by Betsy DeVos during the Trump administration. (This is one of the few good things I can mention about Trump’s changes.) DeVos’s changes, which I described here, included the following:

1.) Schools would now be required to hold live hearings and not closed-door adjudications.

2.) The “single-investigator model,” in which one person adjudicates all the evidence and passes judgment, would go out the window. All collected evidence would now have to be presented to a (presumably) objective third party or parties.

3.) Both accusers and accused will be allowed to cross-examine each other through an advisor or a lawyer. However, those who accuse someone of sexual assault or misconduct cannot be directly questioned by the defendant, which seems fair and protective of people’s psyches. They can, however, be questioned by a third party like a lawyer or adviser. This was something that was missing in the Obama regulation, but was recently mandated by a federal court ruling in Michigan.

4.) A “rape shield” protection will remain in place, so that a complainant’s sexual history will remain strictly off limits.

5.) Hearing, like court cases, will be conducted with the presumption of innocence of the accused.

6.) Instead of relying on the “preponderance of evidence” standard mandated by the Obama “suggestions,” schools can use either that standard or the “clear and convincing evidence” standard, which is stricter but still not as strict as the “beyond a reasonable doubt” standard used in courts.

You may recall that the standards, as I explained last year, are these:

7.) The legal responsibility of colleges and universities would change: previously schools would be legally responsible for investigating complaints if they had “actual knowledge” that an assault had happened. Now they have legal responsibility only if a victim files a formal complaint. (If the victim doesn’t, schools are still encouraged to provide “supportive measures.”)

8.) Exculpatory evidence cannot be withheld from the accused. It could previously, which was one of the most unfair parts of the Obama-era guidelines. Further, those accused will be able to review all the evidence against them, which wasn’t previously mandated.

9.) Finally, colleges and universities can investigate conduct only if it occurs in the school’s own premises, programs, or activities, or in a location over which the college or university exercises oversight.

This now appear to be going the way of the dodo, as Biden is calling for a review of these changes and, as per a campaign promise, will probably undo them. As NPR reports, this has caused joy on the part of some and dismay on the others. I’m on the “dismay” side because an accusation of sexual assault is a very serious matter, and if you’re convicted you could not only be thrown out of college, but it could ruin your life. It seems to me that if colleges are to adjudicate these matters—and most of our readers think they should go first to the police, with colleges acting only after there’s a judicial finding—the accused and accuser should enjoy the same rights they have in a courtroom. By erasing the DeVos changes, Biden is ensuing that the accused person’s rights as outlined above will be weakened.

Another organization viewing Biden’s proposed changes with dismay is the Foundation for Individual Rights in education (FIRE):

“It’s certainly an opening salvo,” says Joe Cohn, legislative and policy director for the civil liberties advocacy group, Foundation for Individual Rights in Education. “But the administration will not be able to easily ditch the regulations, and we’ll fight tooth and nail to make sure that they don’t.”

Because federal courts have affirmed students’ due process rights, Cohn says, the Biden administration will be limited in how much they can change.

“Institutions will hear from us that they can’t just disregard what the courts are saying,” Cohn says.

Others, however, think that Biden’s rollback is great:

“This is going to be a long march,” says Terry Hartle, senior vice president, Government Relations and Public Affairs for the American Council on Education, a trade group of colleges and universities.

The group is among those who object to the Trump administration rules. Hartle says they not only work against survivors, but they’re also unworkable for schools who are not equipped to be turned into pseudo-courts.

“We’re not judicial bodies,” he says. “Campus officials [are] not trained to navigate these sort of quasi-legal disputes.”

Note that they say the rules “work against survivors”, assuming that accusers are survivors. In fact, they work the same way for everyone, survivor or false accuser, perpetrator or falsely accused. And if schools aren’t equipped to be “pseudo-courts”, either throw the accusations to the police and real courts, or give everyone the same protections they get in real courts.

Another issue I object to, but only in small part, is Biden’s executive order on gender discrimination. While in the main it’s a great thing to have to protect transgender and “other-gender” people, it also regards transsexuals who have not undergone any kind of medical treatment as identical in every respect to someone of the sex they claim to be. For most moral and legal issues that’s fine, but when it comes to sports, prisons, and rape counseling, they should have carved out some reasonable exceptions.

At any rate, like me, Sullivan argues strenuously that criticizing Biden is not the same as approving Trump, which should be obvious. If you subscribe, click on the screenshot below. 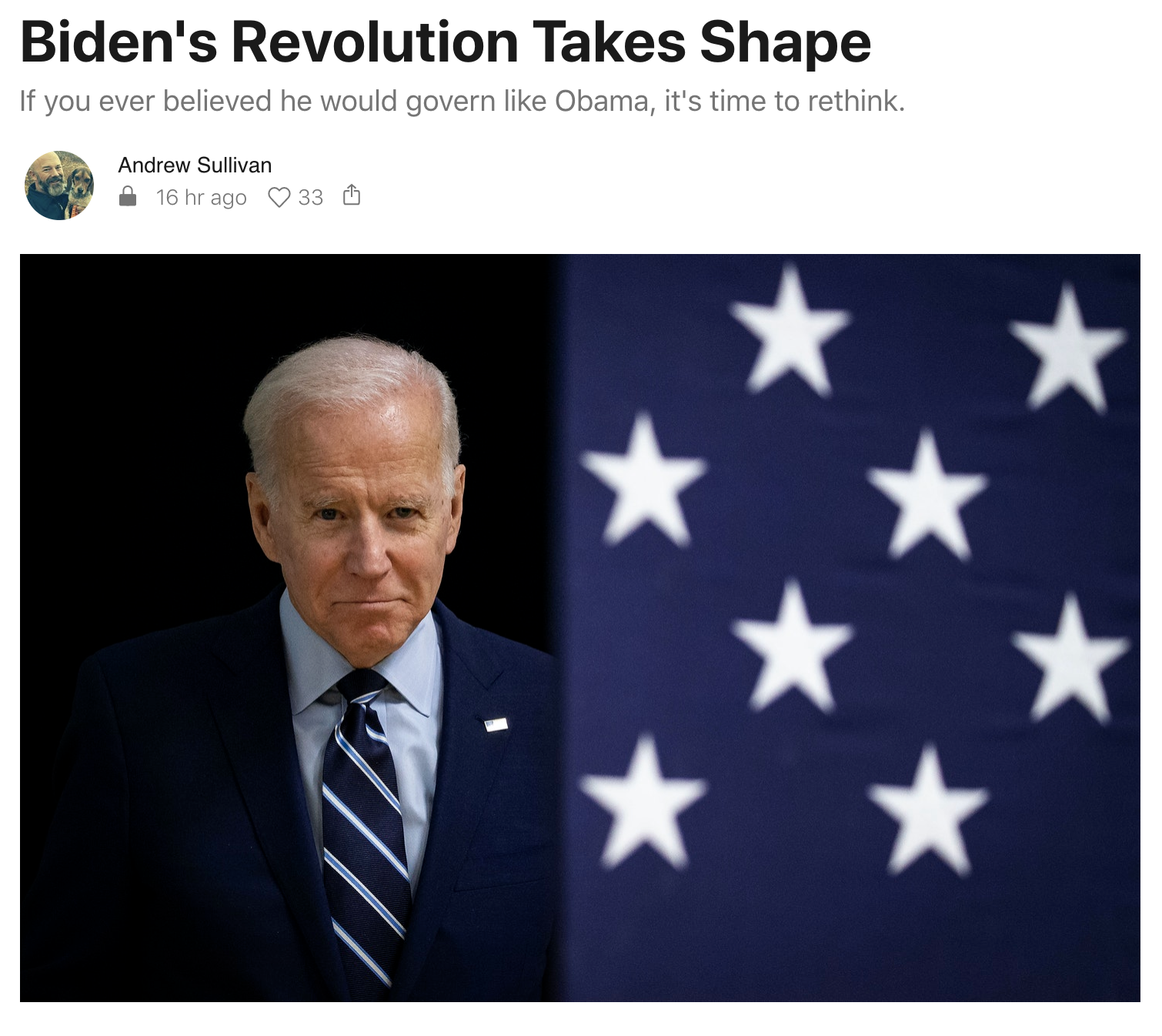 Sullivan, who apparently knows a lot more about economics than I, also has a lot more to be worried about. I won’t go into his concerns about the spree of government spending, and I don’t know enough to weigh in on them. But here are some of his other worries (I don’t share all of these):

Step back some more, and look at the rest of the Biden agenda. It’s pretty similar in scale and ambition. HR1 — reforming democracy — has some good parts, but it is also a Christmas tree of hyper-progressive goals. On “social justice” questions, Biden mandates “equity” as a core principle in all policy-making, and Ibram Kendi indoctrination sessions for government employees; he is likely to end due process for college men accused of sexual assault or rape; he wants to legislate that sex-based rights are trumped by gender-based rights, and to repeal the Religious Freedom Restoration Act when it comes to gays, lesbians and transgender people. After a lifetime of opposition, Biden now backs full public funding of abortion. On immigration, Biden’s goal appears to be facilitating as much of it as possible, while granting a mass amnesty. Am I missing something? Is there a policy area where the left is not in control? (Seriously, if you can find an area where they’re not, I’ll post it, and recalibrate.)

He finds a silver lining, though:

Liberal democracy itself is threatened by the extreme gulf between rich and poor — and rebalancing this is vital. The lack of real economic gains for the vast majority for decades requires a major adjustment — and if sending people checks is the easiest way to do this, so be it. The resilience of low inflation and the persistence of a financial crisis recession suggests that a bigger stimulus in 2009 would have been preferable. Finding a way to support greater inclusion of minorities and women in every sphere of life and work is the right thing to do. Expanding healthcare to those most excluded it from it should not be a controversial question. In all these areas, the Democrats have their hearts and minds in the right place. A shift to the left in 2021 is completely defensible. Even the British Tories are economic lefties now. My 1980s self would look at my 2021 politics and be amazed how far I’ve come.

But a capitulation to the far left is something else.

Is Biden capitulating to the far left? I think he is—at least a lot more than I suspected. And below are some more concerns:

What I fear is that economic history has not ended, and that uncontrolled borrowing, spending and printing will lead to inflation that destroys people’s savings and livelihoods. What I fear is the next recession, when our staggering debt could render the government incapable of mitigating it. What I fear is an assault on the very ideas of individual freedom, merit, objective standards, hard work, self-reliance and free speech that have long defined the American experiment — in favor of crude racial engineering.

I’m with Andrew on the ones below:

What I fear is a generation’s rejection of limited government, and color-blind liberalism. What I worry about is a press whose mission seems increasingly devoted to enforcing elite orthodoxies, rather than pushing back on all forms of power. I fear an educational establishment that instills critical theory’s racism and sexism into the hearts and souls of children from the start, an establishment that regards the very idea of America as indelibly evil, and its founding ideals a myth and a lie.

In the main, of course, things are looking up. A detour into lunacy has been corrected. Now if we could just keep the left from becoming the Looney Left.