About two weeks ago I showed some photos from my French-Canadian friend Anne-Marie, who used to lead strenuous adventure tours, including to Baffin Island, Morocco, and, today, a voyage to the Indian Himalayas. Her captions are indented, and you can enlarge her photos by clicking on them.

Other souvenirs from a past trip in a faraway place. This time I was working with a local tour operator. My task was to make sure that my six customers were safe and happy.

I discovered Ladakh through the lens of Oliver Föllmi, a Franco-Swiss photographer and adventurer. So it was with a strong sense of wonder that I set foot on the Tibetan plateau. After New Delhi (216 m), the next stop was Leh (3524 m), the largest town in Ladakh. So, acclimatizing to the altitude was a must before beginning the Chadar trek toward Zanskar, a valley cloistered within the Indian Himalayas.

A Zanskarpa wearing her Perak for the Likkir monastery festival. The Perak is the headdress studded with turquoise stones. 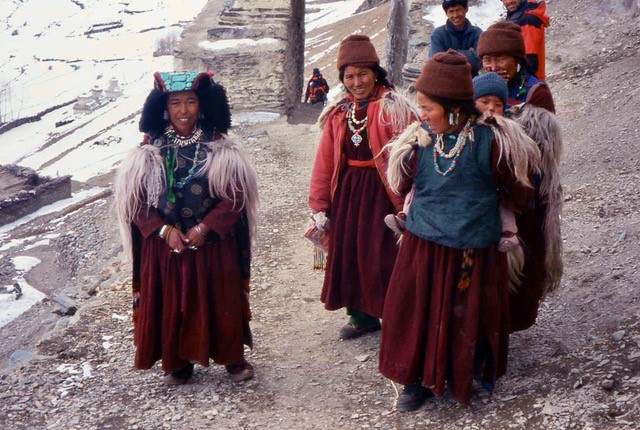 A coppersmith in Chilling, a small village at the beginning of the Chadar. 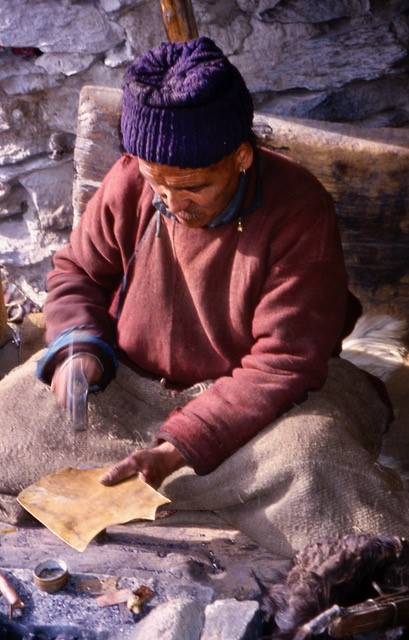 Chadar is a local word for sheets of ice forming on the Zanskar river during their bone-chilling winters: it means “The Frozen One” . For centuries, it has been a lifeline to the outside world during winter months that would be otherwise spent in autarky (self-sufficiency and limited trade). Every January and February, the locals use this route to commute and transport goods such as copper utensils, yak butter, goatskin, etc. 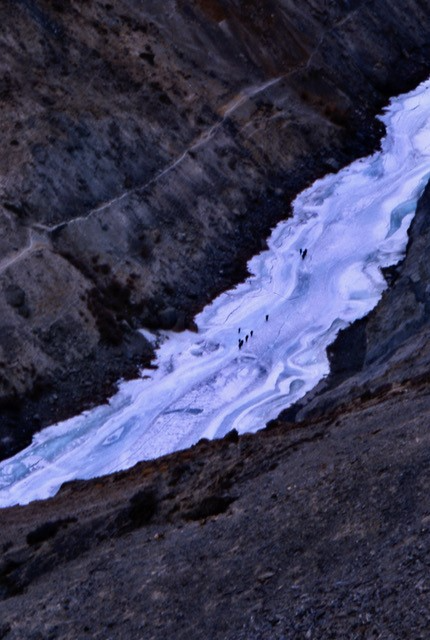 A Zanskarpa woman who was walking for four days on the Frozen One (if the weather is good) to visit one of her daughters living outside the valley. [JAC: Anne-Marie is behind her.] 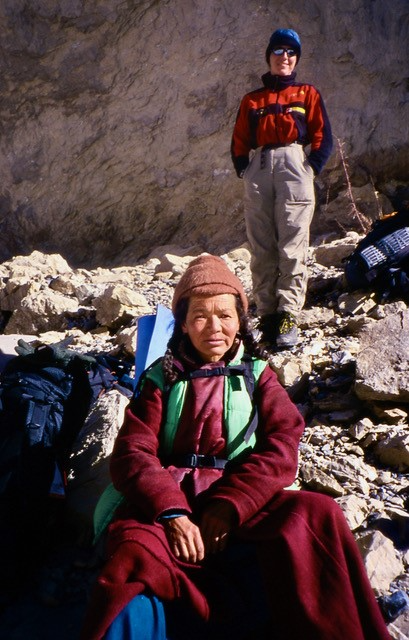 Leaving the valley is not an easy walk. Set within narrow gorges, the Zanskar river is narrow, fast flowing and never completely frozen. Back in 1998, we were the only outsiders. Now it’s another story, for adventure travel has became very popular. Last February (2020), 41 trekkers were evacuated by the Indian Air Force and Army due to flash floods. Climate change is palpable in the region, and people are afraid the Chadar will disappear. 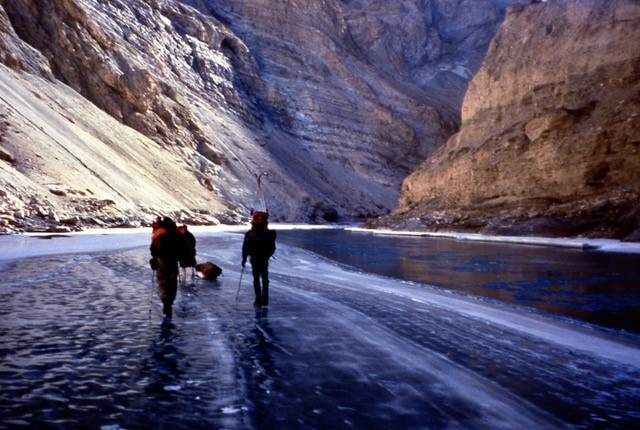 The river’s caprices sometimes forced us onto alternate routes. We all felt clumsy climbing down the cliff, but not the locals, who told us where to place our feet. 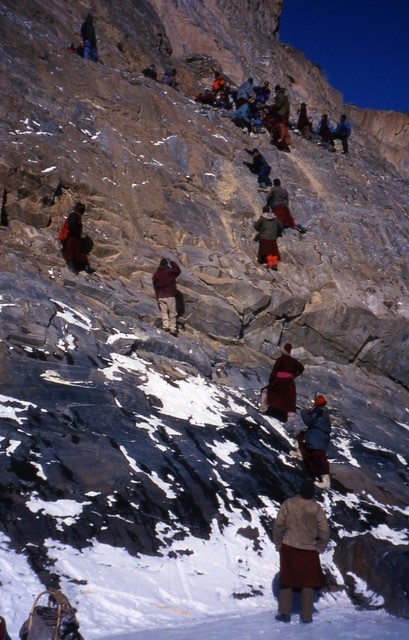 Hay is stored on the flat roof of the two-story houses. The walls are made of mud bricks. In wintertime, families live in the basement, near their yak, dzo (a cow-yak hybrid), horse and goat. Here, I am holding the key to the toilet, a hole in the floor. When we were there, human excrement was considered very valuable, as it was used as fertilizer. 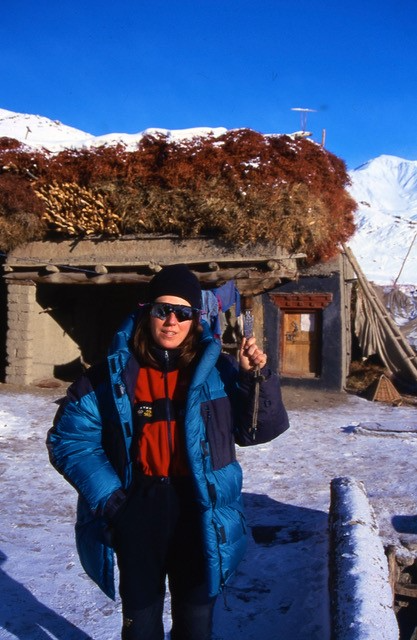 Making friends who invited me into their winter kitchen for butter tea (made with hot water, yak butter and salt). It was cooked on a small stove using yak dung as fuel. 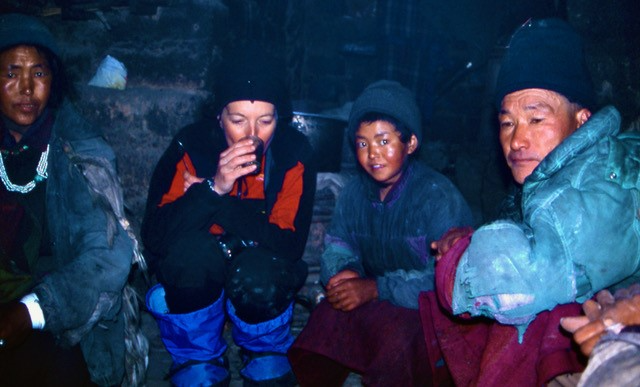 One of their sturdy little horses. 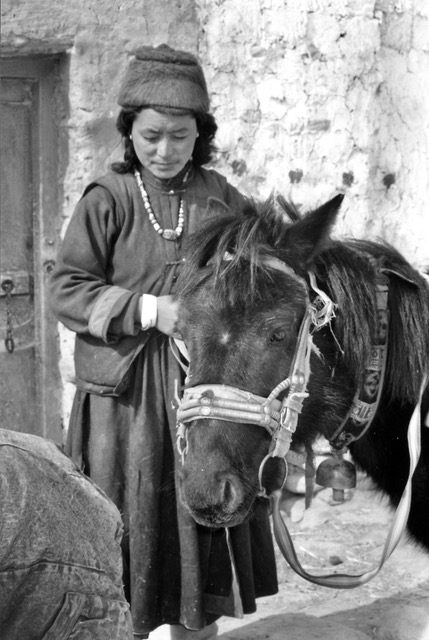 My friend offering me a gift: a small goat. I needed our local guide to explain why I could not accept it. 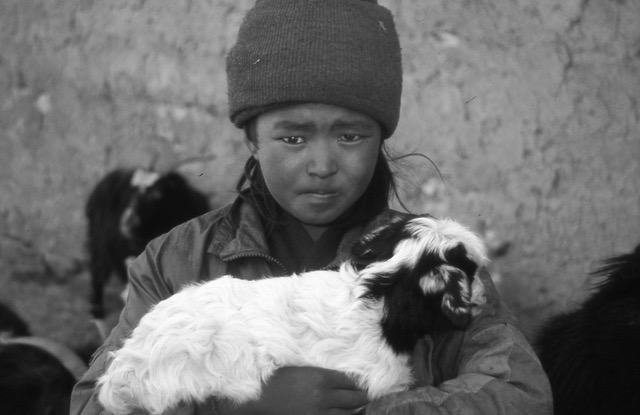