If you’re not a Yank, you may not know that not too long ago, the SATs (originally the Scholastic Aptitude Tests) were required of nearly every high-school student wanting to attend college. There were two sections: verbal and math, with the highest score being 800 on each. When I took them back in the Devonian (1966), nobody paid for the expensive test-preparation courses that many students take now. But as Andrew Sullivan writes in his Substack column this week (I urge you to subscribe), those prep courses don’t do much anyway, raising scores a paltry 5-20 points.

It’s a good piece this week, and there’s another longish piece on the new movie The Mauritianian, a dramatization of the true story of Mohamedou Ould Salahi, imprisoned in Guantanamo for 14 years, and how he was tortured abused, and mistreated, but eventually won his freedom. The movie stars Jodie Foster, Tahar Rahim, Shailene Woodley, and Benedict Cumberbatch, and that’s a good cast. I expect I’ll be watching it.

I like the reach and diverse interests of Andrew Sullivan, and find his site the most absorbing of all the Substack sites for demonized journalists (I subscribe to his and may to McWhorter’s). Click on the screenshot below to go to the SAT story: 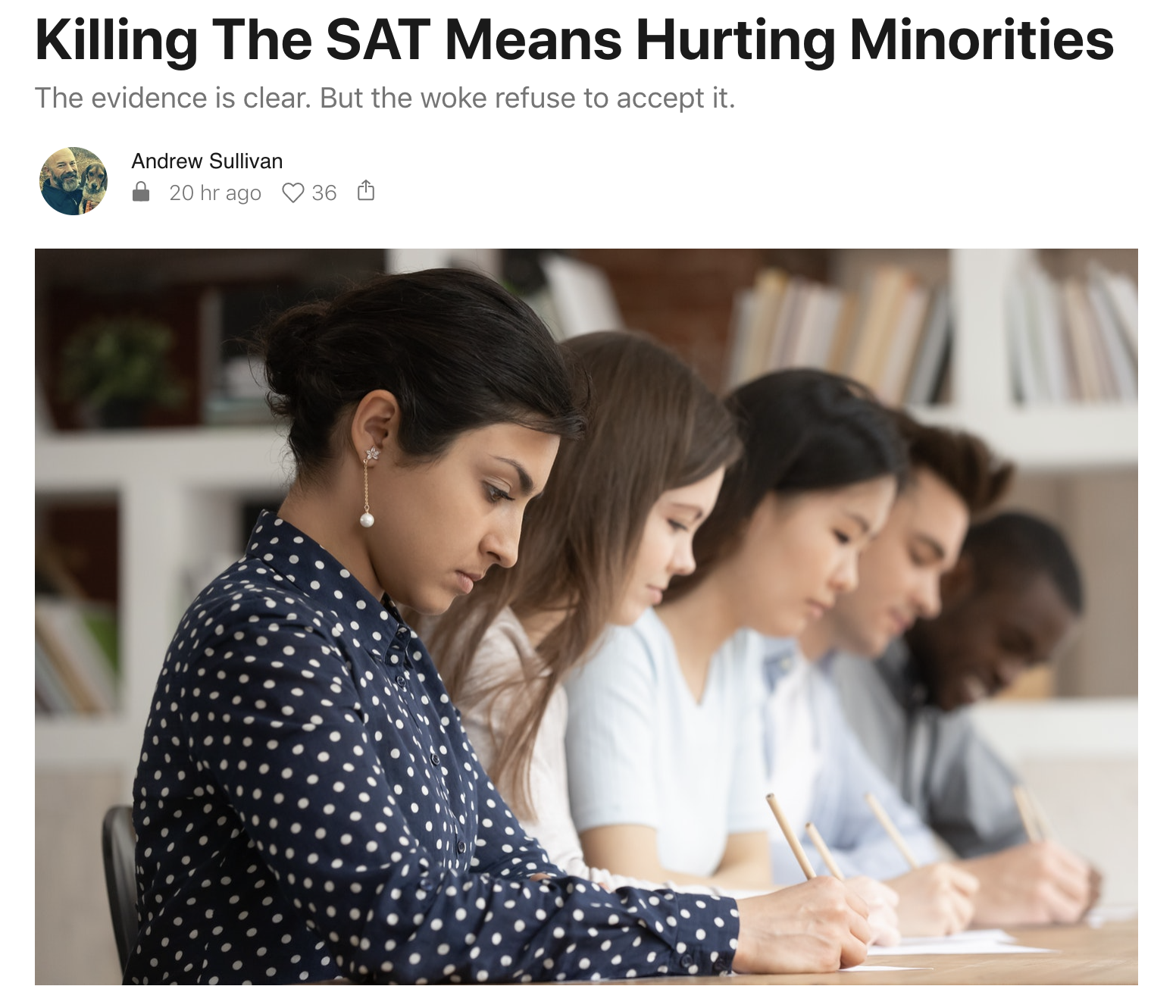 Now many colleges have dropped the requirements for these standardized tests: the University of Chicago dropped the SAT and ACT (another standardized test) requirement in 2018, ostensibly to attract a wider pool of applicants. I’m not sure how that would work unless some qualified applicants couldn’t afford to take the tests (and I believe you can take them for free if you’re poor).  Other schools dropped them for a year or so because of the pandemic (you take them in a big room with lots of other students), and say they’ll “revisit” the requirement after the virus is gone.

But I don’t believe that for a minute. I’d be willing to bet that no school that dropped the SAT/ACT requirement “temporarily” will reinstate it. In fact, the tests are being dropped for another reason:  they show an achievement gap between races, and that is too meritocratic for the Woke. And yet, as Andrew argues—and I think he’s right—dropping the tests is actually harmful to minorities, for it eliminates the one way we can identify smart kids on a nearly level playing field. I wish colleges would be honest about why they’re dropping these requirements, but not a single one has told the truth.

Behind the Covid19 news, outside the 1619 wars, far more important than Dr Seuss, and much more far-reaching than dismantling the classics, a real line is being crossed in American education, and therefore American society as a whole. It’s the accelerating abandonment of standardized tests, the one objective measurement of students’ ability and potential in our society and culture: 77 percent of high school seniors sent in SAT scores in 2019-20; only 44 percent this year; and many schools want to keep it that way. What was initially a temporary suspension of tests because of Covid has become an opportunity to tear down the entire system.

The rationale for the SAT abolition movement is — surprise! — critical theory, which insists that any measurement that results in different outcomes among ethnic or racial groups is a priori racist. (Except for all cases when non-whites and non-Asians do better than whites or Asians, in which case, never mind.) In the words this week of Congressman Jamaal Bowman of New York: “Standardized testing is a pillar of systemic racism.”

His argument is pure Kendi: the results are solely and exclusively what determines if a test is racist. Not the test itself; not evidence about its fairness or otherwise; not data about how it is constructed; not studies that examine its effects alongside every other way of measuring academic potential. Just the results.[JAC: Sullivan is right here about what Kendi would say, for he says that any inequity, or inequality in performance, among races is prima facie evidence of a racist policy.]

There is no countering this argument because it is not an argument. It is a threat. All it tells us is that the power of the term “white supremacist” will be ruthlessly deployed to shut down anyone who dares to argue that the SAT is, in fact, the least culturally biased of all measurements, the one thing wealthy kids cannot buy, and the most helpful tool in discovering the potential of poor, first-generation immigrant, black and Hispanic children, and rescuing them from the restrictions of class as well as race.

Sullivan then summarizes some misconceptions about the tests, and I’ll summarize his summary:

a.) The tests are still the best predictor of academic success in college (better than high-school grades) as well as of “life success” (e.g. $$).  And this predictive ability holds for all demographic groups, all minorities.

b.) The tests aren’t biased against any groups. They used to be somewhat biased against “cultures”, but a lot of work has gone into making them “standardized” with respect to culture and ethnicity. Note as well that the highest scorers are Asian-Americans—and not just the ones whose families have been here for generations. That belies the “cultural bias” narrative against people of color.

c.) Sullivan gives data showing that nearly half of students admitted on the basis of their SAT scores were poor or first-generation students (those who were the first in their family to go to college). As Sullivan says, “almost half of the SAT places were from minority or poor kids, who would otherwise have been hidden from view. Why on earth would you surrender that tool?”

d.) The ethnic-group inequalities highlighted by the tests begin much earlier than college.  As I’ve said incessantly, true equality demands expensive and yearslong efforts diverting money from the richer to the poorer. That offends many Americans’ sense of fairness, but is it fair to have permanent minority underclasses as a legacy of slavery and discrimination? Here’s Sullivan’s fix:

If you want to increase black and Latino representation in higher education, tackle the real problems, not the fake ones. Insist on higher standards from the very beginning in our failing schools; find ways to strengthen the stable nuclear family among blacks and Latinos, which is by far the most significant advantage Asian-American kids have; challenge the street culture that tells minority kids that reading and studying is “acting white”; make the SAT mandatory for everyone, make it easier to take, and make it free.

Those are good suggestions. The nuclear family issue, though, tends to bridle the Left. When I brought it up in a discussion with a liberal and antiracist friend about cultural differences that impede achievement (he was the principal of a largely black secondary school), he simply shut me down, saying “We’re not going to discuss that.” Now I don’t know offhand the hard evidence that two-parent families are better for the achievements of their kids, but I’m pretty sure it’s there. In his book How to Be an Antiracist, Ibrahm Kendi simply denies this effect.

We need to bring these tests back. In their desire to eliminate the meritocracy, the Woke have removed from colleges a tool to identify minority kids who deserve admission and could not have been singled out by grades alone.  It’s an example of how people have simply ignored the data in favor of their ideology, and, in a desire to be performative anti-racists, have hurt the very groups they are trying to help.  I’ll finish with Sullivan’s conclusions.

. . .many on the left want to get rid of the SAT altogether. They insist, against all the evidence, that the nuclear family is irrelevant to success. They are telling black and minority kids that things like perfectionism, hard work, and turning up on time are just “white supremacy culture,” and standards are racist. They are setting up black kids for failure, while telling them that failure is actually success, and then discriminating against Asian kids to cover up for the racial imbalance these policies create.  [JAC: He’s referring in part to the affirmative-action lawsuit filed by Asians against Harvard, which is still wending its way through the courts.]

Standardized testing has always been a progressive idea. It disrupts class and race, unseats entrenched privilege, and offers the poor and the marginalized their best chance of social mobility. And it seems to me deeply depressing that progressives would rather posture about “white supremacy” than do anything to actually help minorities progress in childhood, without condescending, neo-racist discrimination in their favor, long after the die has been cast.

98 thoughts on “Deep-sixing the SATs: the misguided Left discards a valuable tool”