This morning I got the following email, occasioned, I suppose, by the appearance of a new book by Eric Hedin published by the ID creationist outfit The Discovery Institute. The DI is promoting it heavily, as it’s not selling very well; and I haven’t mentioned it, although one of its main topics is the alliance between me and the Freedom from Religion Foundation (FFRF) in trying to get Hedin to stop teaching intelligent design in a public-university (Ball State) science class. We succeeded, helped by the reporting of Seth Slabaugh at the Muncie (Indiana) Star Press, who pulled no punches about Hedin.

I won’t recount in detail the story of our interactions with Hedin and Ball State, but they took place in 2013. After the FFRF wrote a letter to Ball State warning them about teaching religion in a science class (after all, it was before that, in the Kitzmiller v. Dover case, that a federal judge declared that Intelligent Design was “not science”), they deep-sixed Hedin’s course, which was full of religiously-based readings. At no time did any of us call for Hedin to be fired. What we wanted was simply the cessation of teaching a religiously-based idea in a public university classroom. That is not freedom of speech, but a violation of the First Amendment as well as the abnegation of every professor’s duty to teach the subject as it is understood by experts.

Hedin got tenure at Ball State, and I did not oppose that, either. He seemed to be a competent professor in his area (physics and astronomy), and I don’t believe in trying to ruin people’s careers just because they teach one misguided course. Nevertheless, Hedin eventually left Ball State and wound up at a school more attuned to his religiosity: the evangelical Christian Biola University (an abbreviation for its former name: “Bible Institute of Los Angeles.” There he isn’t forced to teach the Satanic topic of evolution. And his new book, which I haven’t read, and won’t, is apparently One Long Kvetch about how he was bullied and canceled by me and the FFRF. It was that incident that nabbed me the Discovery Institute’s 2014 “Censor of the Year” award—one of the proudest achievements of my life.

I asked the author of the email, William Wegert, if I could post it here and include his name, and, to his credit, he said yes, as “It’s part of free inquiry and rationale [sic] dialogue.” Only after I answered him did I look him up and found out why he’s interested in l’affaire Hedin.

Wegert’s email was copied to me and was actually sent to the Provost and President of Ball State University, where Hedin no longer teaches.

I wish to thank Ball State University!  I recently learned of the university’s cancellation of Dr. Eric Hedin’s “Boundaries of Science” course following the intervention of Dr. Jerry Coyne.

After reviewing the information available on the web and from Dr. Hedin’s own words, his popular honors class was an exercise in critical thinking in which students were invited to read the works of materialists as well as those believing that specified complexity might have an intelligent cause.  For any right thinking person, this is what institutions of higher education should be doing, giving students opportunities to consider scientific evidence that lends support to both positions, as well as everything in between.  Apparently, Dr. Coyne and Ball State think otherwise. They must have been fearful of something, but I would not have expected them to share those fears openly.

For what reason?  The First Amendment?   Anyone with a high school understanding of American history knows that such an issue has absolutely nothing to do with our Founders’ concerns in that Amendment.

So looking for another rationale for cancelling the class, let us say the class lacked a scientific basis, at least in the minds of Ball State administrators.  If that is the case, I suggest that those decision-makers have some research to do to get caught up on a plethora of research projects, peer-reviewed articles, and major books coming out of the Intelligent Design movement.  They are quite behind the times, something not becoming to publish-or-perish faculty, wouldn’t you agree?  You see, week-by-week, article-by-article, research project-by-research project, evidence mounts that Darwinism and Neo-Darwinism have both been hung in the balance and found wanting as a tenable explanation of the complexity of life, starting with the genetic code.

The reason I thank you is that I have a popular presentation I make to students and parents around the US and overseas entitled the “Six Surprising Benefits of Attending a Faith-Based University.”  Ball State’s actions in cancelling this course has allowed me to add a seventh benefit!  At faith-based institutions, where I have nearly 40 years of experience, by the way, we provide students with both sides of these kinds of arguments and let them evaluate the evidence for themselves.  There is no fear of where the evidence might lead.  Students are going to be stepping out into the wide world soon enough and will come to their own conclusions anyways.  Why not challenge them in the area of sound critical thinking during the college years?   Dr. Coyne and Ball State give every evidence of being afraid of where that evidence may lead.

So, thanks to your actions, I get to add yet another benefit for attending a faith-based institution.  This kind of fear does not exist at such schools.  Free inquiry is invited and there is no fear of what the students might be exposed to.  Faith-based colleges and universities take seriously the mission of preparing students to think for themselves based on the facts, including results of scientific studies..

Welcome to the Cancel Culture, Gentlemen.  And thank you for enhancing my presentation and giving me a nice Ball State University/University of Chicago case study to present to eager listeners.

Well, I said my piece above about why professors should not teach intelligent-design as if it were science. For one thing, it’s illegal at state schools. But it also is a lie. It’s as if a European history professor denied the Holocaust in her classroom. I have no objections to creationists speaking at Universities in public lectures, and when one spoke here a few years back, I didn’t try to stop it. But it’s a different matter to teach it in a biology classroom as if it were accepted science.

Wegert’s antepenultimate paragraph about working at a faith-based institution, piqued my interest about who Wegert is. And it didn’t take long to find this on LinkedIn (click on screenshot): 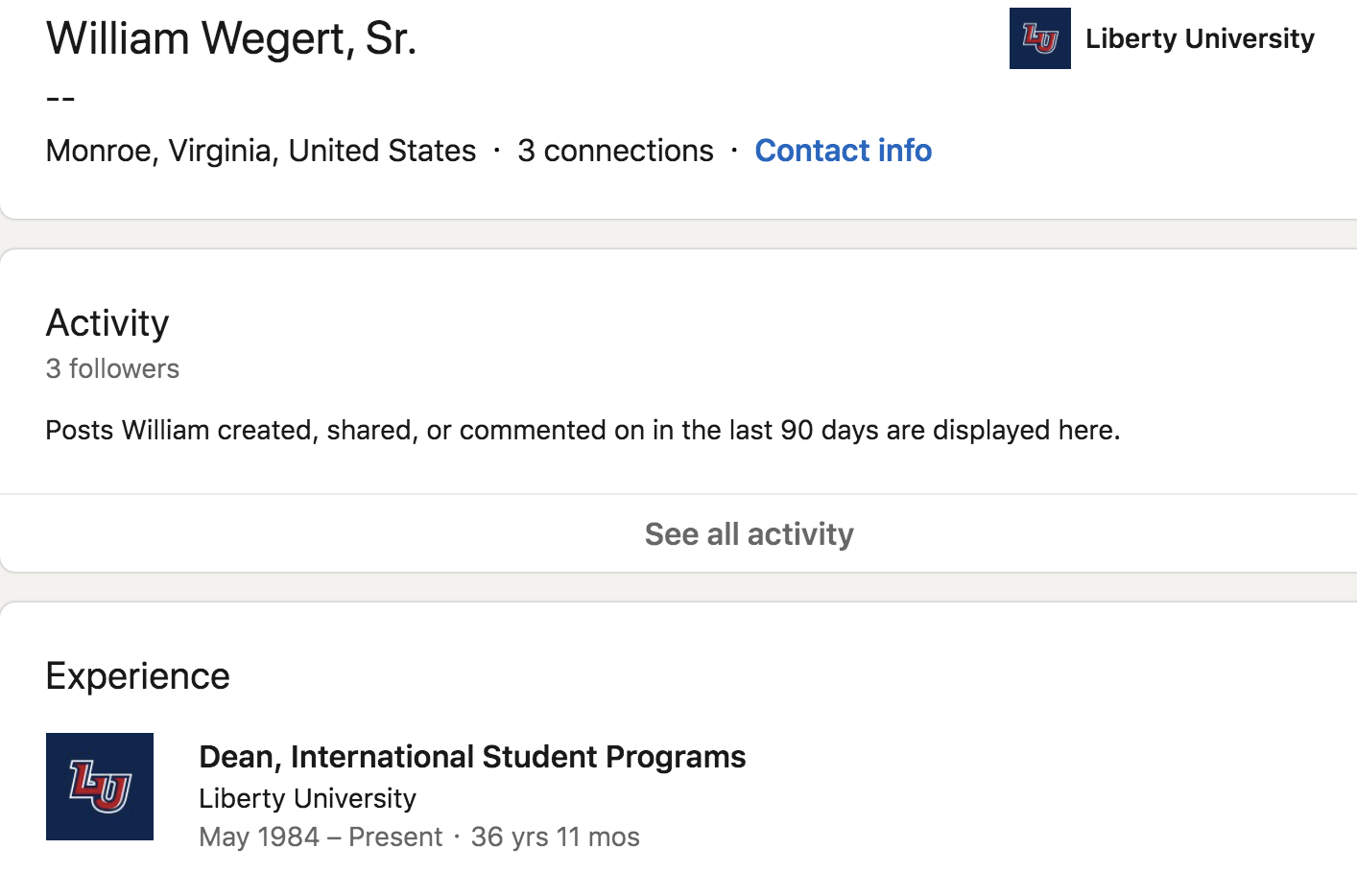 He works at Jerry Falwell’s evangelical Christian Liberty University in Lynchburg, Virginia, where evolution IS NOT EVEN TAUGHT! Instead, they teach “Creation Studies“, and not in a way that promotes students’ independent thinking. And it teaches the most ridiculous form of creationism, YOUNG EARTH CREATIONISM, which is a triple lie since it distorts geology and chemistry as well as biology.

Here’s the “purpose” of its teaching of Creation Studies:

The purpose of the Center for Creation Studies is to promote the development of a consistent biblical view of origins in our students. The Center seeks to equip students to contend for their faith in the creation account in Genesis using science, reason, and the Scriptures. The minor in Creation Studies provides a flexible program with broad training in various disciplines that relate to origins as well as the Bible. Students in both science or non-science majors will benefit from an in-depth study of creation and evolution.

After I found this out, I wrote back to Wegert saying this:

Although Wegert replied within minutes when I asked permission to publish his letter, so far I haven’t gotten an answer to this one.

I invite readers to respond to Mr. Wegert. After all, he’s seeking discourse! Just remember to be polite.

28 thoughts on “A creationist writes in: Eric Hedin resurfaces”