If you haven’t read Nabokov’s fantastic novel Lolita, published in 1955, you should, for it’s a classic and its prose is beautiful. The topic: the infatuation of a pedophile, Humbert Humbert, for a 12-year-old girl he names Lolita (her real name is Dolores), and their subsequent affair (or rather, serial rape). This a dicey subject, and in this wonderful essay in the New York Times (click on screenshot), Emily Mortimer ponders why the novel didn’t encounter so much opposition back then when it would surely be considered unpublishable today (after all, Humbert repeatedly rapes Lolita). And indeed, I can’t imagine it being published today. Nabokov himself had trouble getting it into print, as it was rejected by many mainstream publishers and finally issued by Olympia Press, which specialized in pornography. But it’s still widely read and appreciated, even in this #MeToo age. Why is that? Mortimer has some provocative thoughts.

What’s even more amazing is that Emily Mortimer (born 1971) is not a literary critic but a movie star; you may have seen her in Lovely and Amazing, Notting Hill, and Woody Allen’s Match Point, as well as in various television series. But her essay is as readable and intelligent as that of any popular book reviewer or critic, and I was amazed that an actor could produce criticism of this quality. She’s a true polymath, and it’s clear from her essay that she’s very well read. But, looking her up, I see that she also has a degree from Oxford in Russian studies.

The occasion for this publication is the appearance of a new anthology called Lolita in the Afterlife, published this month, in which Mortimer’s essay appears. Also, Mortimer starred in a 2017 movie called “The Bookshop“, which got lukewarm reviews but does have an important bit in which Mortimer, playing a widow who opens a bookstore in a small English town, must decide whether or not to stock Lolita lest its presence cause trouble.

At any rate, do read her essay, which mixes her movie experience, remembrances of her barrister father, who defended people like Humbert Humbert, and, above all, her appreciation for the novel and ideas about why it’s risen above the “cancel culture” that would preclude its publication today. Click on the screenshot: 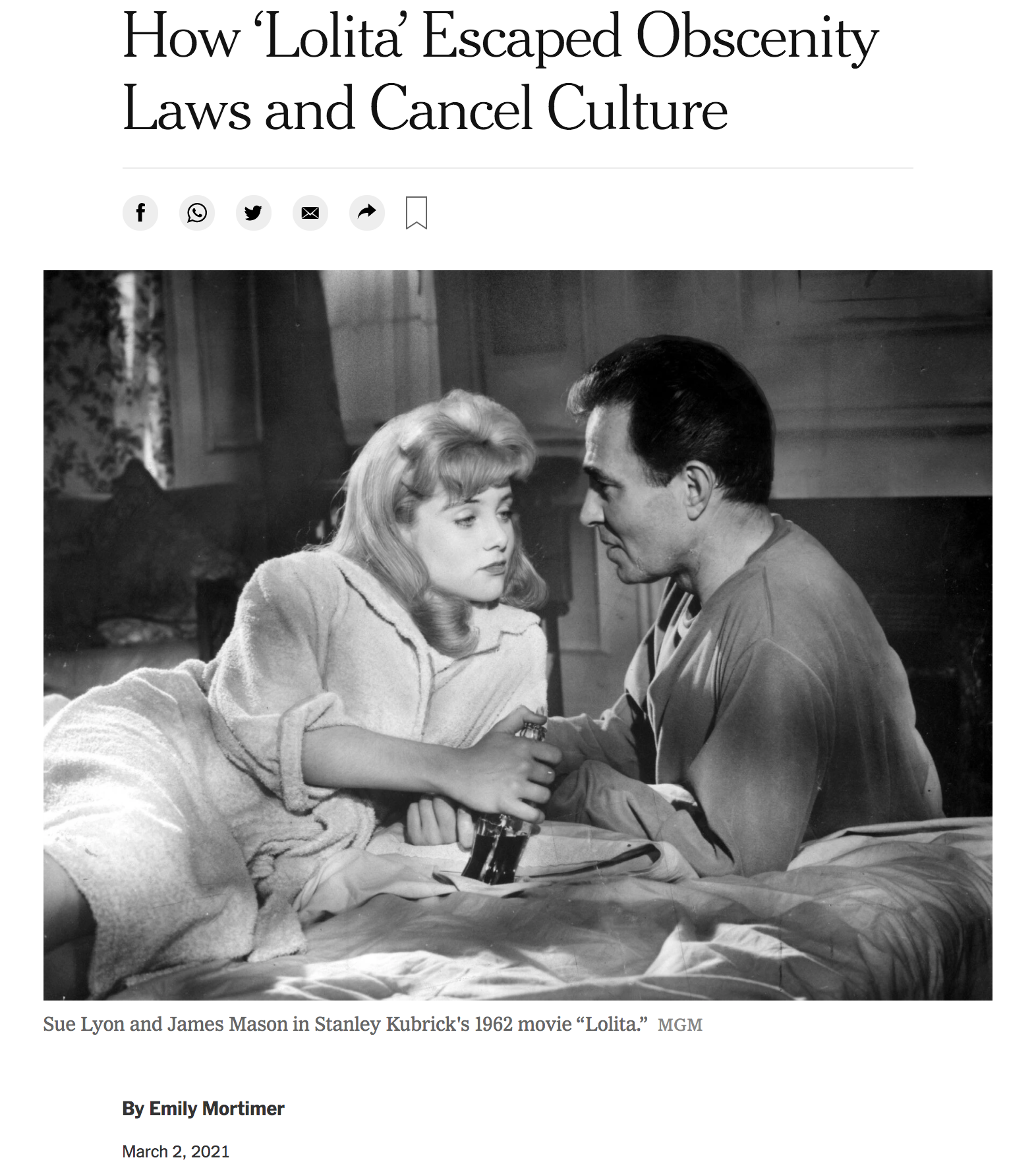 Here are some of Mortimer’s ideas about why the novel, though perennially controversial, is still popular.

In some ways I think it is much easier to separate the writer from his subject in the case of Nabokov and “Lolita” than it is to separate Picasso, say, from his paintings or Woody Allen from his films or Balthus from his little girls. Nabokov was a happily married man who admired and adored his wife, Véra, and lived an exemplary life as an academic and author. By all accounts his only extramarital dalliances were with buxom middle-aged women. If Nabokov had ever had dark, venal thoughts like those of Humbert Humbert’s, they remained thoughts, or words on a page.

But I think there are other reasons “Lolita” has endured, despite being more shocking than many pornographic novels of its time and despite the reappraisal that many other transgressive works of art have gone through in our time. First, it’s very funny. My dad always said you could get away with anything in court as long as you made people laugh: “In obscenity cases the first thing I did was to make the jury laugh. The great object of the judge and the prosecutor was to stop the jury from laughing.” Humbert Humbert is hilariously self-aware and funny. Even in extremis, even at the height of the drama when he is out for blood and on the road to ruin (when a lesser author would have forced his hero into earnestness), our hero is still cracking jokes and making us laugh.

The novel is also written in brilliant prose. Nabokov himself claimed that this book was a record of his “love affair with the English language,” and the feeling is of language being used as it has never been used before and might never be again. You read about awful things in vertiginous, sensational sentences that take your breath away. As Humbert confesses, “You can always count on a murderer for a fancy prose style.”

She quotes Nabokov’s brilliant beginning, which simply sucks you into the novel:

“Lolita, light of my life, fire of my loins. My sin, my soul. Lo-lee-ta: the tip of the tongue taking a trip of three steps down the palate to tap, at three, on the teeth. Lo. Lee. Ta.”

That is brilliant writing! The book is a tour de force not just of thought, but of writing itself. One more thought from Mortimer:

It’s impossible to retreat to any kind of moral high ground when you read “Lolita” — partly because Nabokov threads a strange emotional honesty and purity through his portrait of obsession. Because as well as all the other things the book is, “Lolita” is one of the most beautiful love stories you’ll ever read. You finally understand this in its last, thrilling, devastating, tragic section.

And there’s one more reason, something I’ve touched on in my exchange with Adam Gopnik about whether literature gives us knowledge, and, if not (my view), what does it give us? Mortimer’s answer parallels mine:

“Lolita” makes us see with the eyes of a man who is a pedophile, a rapist and a murderer, and that’s I think the essential reason it’s escaped the harsher accusations of both the courts and the moral police in the 60 years since it’s been published.

. . . Unlike many lesser works of fiction, some of which my father found himself advocating for, “Lolita” has been protected by “the refuge of art,” where it should be forever safe to explore the thoughts and feelings of people capable of the most monstrous things. “Lolita” remains unassailable because it disarms you and transcends judgment. The experience of reading it, if you do actually read it, is to relinquish concern with right and wrong and just to feel things as another person feels them. One of our most precious attributes, and perhaps the greatest measure of our humanity, is our ability to do this. Florence Green in her little bookshop understood it, my dad knew it, Nabokov did, and really anyone who is a reader knows it, too.

And this, I think, is why, despite its depiction of pedophilia, rape, and murder, the novel has retained its status as consummate art. As I wrote in one letter in the Gopnik exchange, “In the end, truth in art is simply an understanding of the artist’s perspective on life. That perspective can be disturbing, life-affirming or even life-changing, but the knowledge it imparts is how one person’s mind works.” And I added this:

By portraying others, literary art offers us a sense of self-confirmation: the realization that people are like us in many ways, though different in others. Art brings awareness of and focuses on feelings that we may not even be aware of, giving us the chance to assess, alter, and buttress our own lives. It’s a series of “aha moments.”

In this case, the minds we enter are those of Nabokov, and by proxy his creation Humbert Humbert. Is this the way any pedophiles really think? I doubt it: it’s the way Nabokov thinks that one pedophile might have thought, and surely there are elements of reality in it. But in the end it’s a work of pure imagination. What draws us—and Mortimer—to Lolita is the opportunity to step out of our quotidian lives and see what it might feel like to be an aging intellectual soaked in love for a diffident 12 year old girl. There is no “knowledge” about the universe in this book (at least no knowledge that doesn’t require confirmation by empirical study), but that doesn’t lessen its value, so aptly described by Mortimer above. And who cares if Humbert Humbert is feeling anything that any human has felt before? What’s important is that we feel it, and for the interval between the book’s covers we become Humbert Humbert.

Here’s the trailer for “The Bookshop,” and, come to think of it, I HAVE seen this movie. But I don’t remember much about it. The trailer features the selling of Lolita, as well as the professor who extolled van Gogh in the famous “Dr. Who” clip.