I finally figured out, after I read the article below, what bothers me about Glenn Greenwald. It’s not that I disagree with him some of the time, but that he’s always so painfully strident and earnest, seemingly lacking any sense of humor, that reading his pieces is like being yelled at.  His new Substack piece rightfully excoriates Biden for promising over a year ago to be hard on Saudi Arabia for its human rights violations, and then folding into a wet paper towel when his own intelligence services determined that Saudi Crown Prince Mohammed bin Salman, the de facto ruler of the country, almost surely ordered the murder of dissident Saudi-American journalist Jamal Khashoggi.

This is paywalled, so I’ll just give a few quotes below. 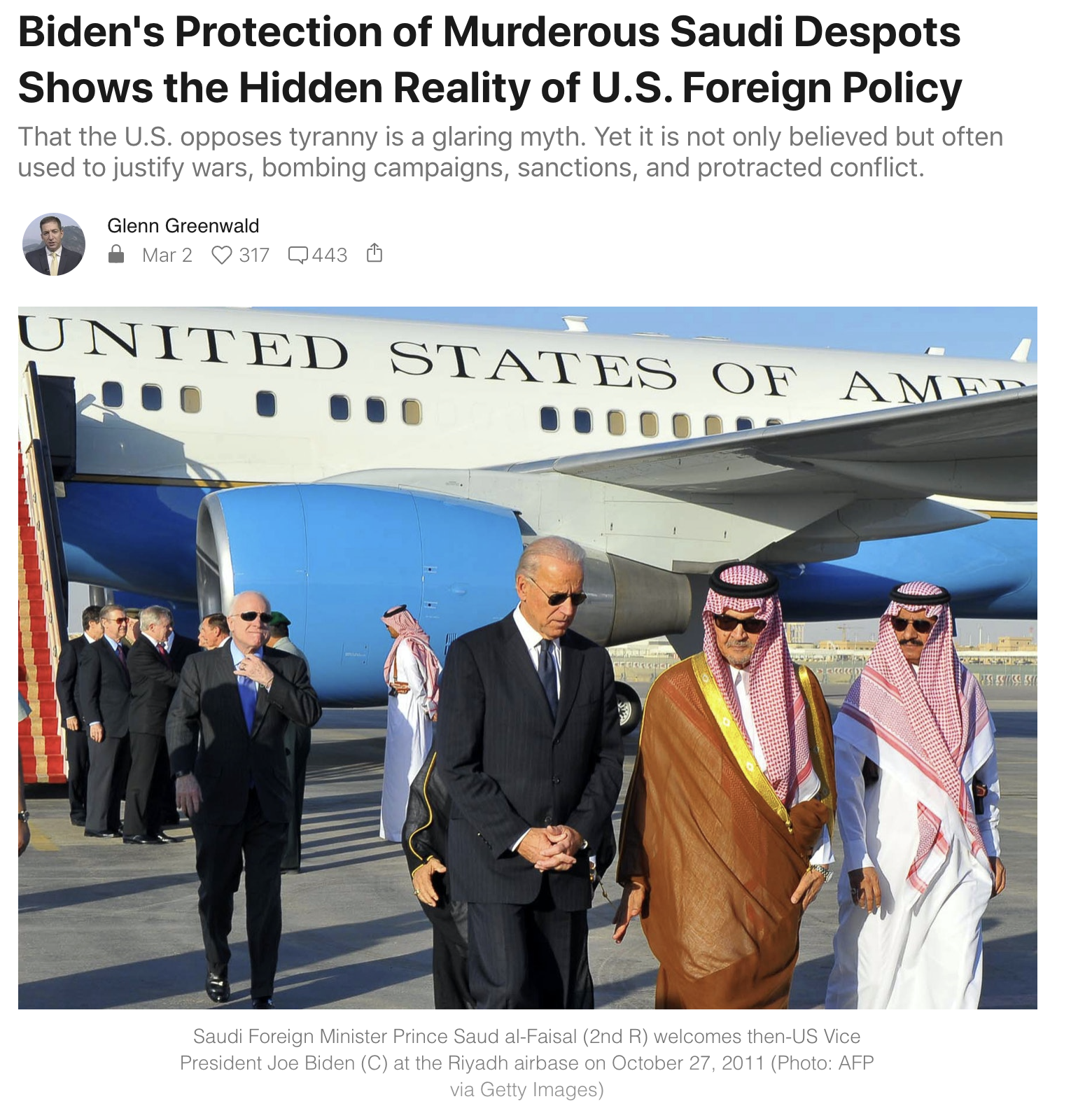 He starts out with a rant, which he continues later with supporting examples. It’s not that he’s wrong, for he isn’t. I agree with his calling out Biden. It’s just that it’s strident, and also reprises largely irrelevant tropes that show up in many Greenwald columns, including harping once again on Julian Assange and Edward Snowden. Now, we atheists are accused of stridency all the time, so that doesn’t make the piece wrong or unreadable; it just makes it go down with some difficulty. Greenwald:

When the U.S. Government and its media partners want to increase the hostility and fear that Americans harbor for adversarial countries — for Russia, for China, for Cuba, For North Korea — it hauls out the same script: we are deeply disturbed by the human rights violations of that country’s government.

Yet it is hard to conjure a claim that is more obviously and laughably false than this one. The U.S. does not dislike autocratic and repressive governments. It loves them, and it has for decades. Installing and propping up despotic regimes has been the foundation of U.S. foreign policy since at least the end of World War II, and that approach continues to this day to be its primary instrument for advancing what it regards as its interests around the world. The U.S. for decades has counted among its closest allies and partners the world’s most barbaric autocrats, and that is still true.

Indeed, all other things being equal, when it comes to countries with important resources or geo-strategic value, the U.S. prefers autocracy to democracy because democracy is unpredictable and even dangerous, particularly in the many places around the world where anti-American sentiment among the population is high (often because of sustained U.S. interference in those countries, including propping up their dictators). There is no way for a rational person to acquire even the most minimal knowledge of U.S. history and current foreign policy and still believe the claim that the U.S. acts against other countries because it is angry or offended at human rights abuses perpetrated by those other governments.

What the U.S. hates and will act decisively and violently against is not dictatorship but disobedience. The formula is no more complex than this: any government that submits to U.S. decrees will be its ally and partner and will receive its support no matter how repressive, barbaric or despotic it is with its own population. Conversely, any government that defies U.S. decrees will be its adversary and enemy no matter how democratic it was in its ascension to power and in its governance.

And about Saudi Arabia. First, here’s Biden’s promise to punish the country should they be found responsible for murdering Khashoggi.  This was said during a Presidential candidate debate on November 20, 2019. Biden’s putting on his tough-guy persona:

That is a strong statement that the U.S. will stand up for violations of human rights. Except, we found out, when it’s Saudi Arabia or other “allies” who violate them.

But beyond a few trivial and inconsequential gestures (sanctioning a few Saudis and imposing a visa ban on a few dozen others), the Biden administration made clear that it intends to undertake no real retaliation. That is because, saidThe New York Times, “a consensus emerged inside the White House that the cost of such a breach, in terms of Saudi cooperation on counterterrorism and in confronting Iran, was simply too high.” Biden officials were also concerned, they claimed, that punishing the Saudis would push them closer to China.

Not only is the Biden administration not meaningfully punishing the Saudis, but they are actively protecting them. Without explanation, the U.S. withdrew its original report that contained the name of twenty-one Saudis it alleged had “participated in, ordered, or were otherwise complicit in or responsible for the death of Jamal Khashoggi” and replaced it with a different version of the report that only named eighteen — seemingly protecting the identity of three Saudi operative it believes to have participated in a horrific murder.

Even worse, the White House is concealing the names of the seventy-six Saudi operatives to whom they are applying visa bans for participating in Khashoggi’s assassination, absurdly citing “privacy” concerns — as though those who savagely murder and dismember a journalist are entitled to have their identities hidden.

Worse still, the U.S. is not imposing any sanctions on bin Salman himself, the person most responsible for Khashoggi’s death. When pressed on this refusal to sanction the Saudi leader on Sunday, White House Press Secretary Jen Psaki claimed — falsely — that “there have not been sanctions put in place for the leaders of foreign governments where we have diplomatic relations and even where we don’t have diplomatic relations.” As the foreign policy analyst Daniel Larison quickly noted, that is blatantly untrue: the U.S. has previously sanctioned multiple foreign leaders including Venezuela’s Nicolas Maduro, currently targeted personally with multiple sanctions, as well as North Korea’s Kim Jong Un, Iran’s Supreme Leader Ali Khamenei, and the now-deceased Zimbabwean leader Robert Mugabe.

Jen Psaki’s statement really bothers me because, first of all, she’s a fellow William & Mary alum, but mostly because she’s turning out to be somewhat of a dissimulator—not nearly as bad as Trump’s succession of Public Liars for sure, but when Psaki was appointed I really thought, “At last, someone who’s going to be completely straight with us.”

Here’s Psaki on CNN waffling about Biden’s campaign promises. The Saudi stuff starts at 3:17 and lasts about four minutes, after Psaki is played Biden’s campaign promise about Saudi Arabia. The interviewer, whom I don’t know, asks some tough questions, and Psaki dissimulates in the way Greenwald noted about “sanctions on leaders of foreign governments”. The interviewer keeps pressing, asking Psaki whether she thinks justice has been done re Khashoggi.  The response is lame. There are so many waffles that you need to watch this with a jug of maple syrup.

I was foolish: it’s politics, Jake!

There’s a bit of a Chomsky-esque tone to the rest of the piece in its indictments of U.S. complicity in propping up dictatorships, but who can say that Greenwald is wrong?