Welcome to Thursday, February 11, 2021: National Peppermint Patty Day (no, not the Peanuts character but the confection). It’s also Fat Thursday, White Shirt Day (commemorating an auto strike settled in 1937; see below), Inventor’s Day, and International Day of Women and Girls in Science.

Today’s Google Doodle (click on screenshot) celebrates the life of Maria Grever, described as “The first female Mexican composer to achieve international fame.” Her best known song in the U.S., “What a difference a day makes” (in Spanish: “Cuando vuelva a tu lado”) was a big hit for Dinah Washington.

The entire 8-hour video of yesterday’s impeachment proceedings has been posted on Youtube. I wrote a few superficial thoughts on the impeachment trial last evening, and you can see them here. Having not watched much of it, I wanted readers to discussion their take so far. I believe this is the video put into evidence by the impeachment managers; click on “watch on YouTube” to see the 13-minute production. The NYT has a good summary and takeaway of Day 1+ by Eileen Sullivan.

I remind readers to be polite in their discussion of the impeachment trial, and not diss other readers or the host. Emotions are high these days, and you don’t even see the comments that I have to trash because they’re either vicious or obscene.

The Saudis have released women’s rights activist Loujain al-Hathloul after nearly three years in jail. Famous for agitating for Saudi women’s right to drive, she was sentenced to six years in prison in 2018. But after Biden pressured the country to improve its human rights record, they released al-Hathloul on three years’ probation and a five-year travel ban.  Here’s a brave woman:

The Guardian reported yesterday that Bruce Springsteen was arrested for drunk driving in November.

A spokesperson for the national parks service confirmed that Springsteen was arrested on 14 November in a part of the Gateway National Recreation Area on the New Jersey coastline.

The park is on a narrow, beach-ringed peninsula, with views across a bay to New York City. It is about 15 miles north of Asbury Park, New Jersey.

Springsteen received citations for driving while under the influence, reckless driving and consuming alcohol in a closed area. The spokesperson said Springsteen was cooperative throughout the process.

As Jez, who sent me this link, noted, “Oh dear, I guess Bruce was on another “highway jammed with broken heroes on a last chance power drive.”

Finally, today’s reported Covid-19 death toll in the U.S. is 471,343, an increase of about 3,200 deaths over yesterday’s figure (the rise over the last few days may represent Superbowl party congregating). The number of new cases is now falling, but we still may exceed half a million deaths within the month. The reported world death toll stands 2,366,880, a big increase of about 14,000 deaths over yesterday’s total, or about 9.7 deaths per minute.

Stuff that happened on February 11 includes:

Thats not quite correct, for Wikipedia also reports that the term “gerry-mander” was first used in a cartoon from March of that same year. Here it is, showing the odd way of drawing state senate districts that got Gerry into trouble.

Soubirous,  had 18 visions of the a young woman, though they were never identified by her as the Virgin Mary (the apparition said she was the “Immaculate Conception”. Nevertheless, they were all officially confirmed by the Catholic Church (?)died at 33 from tuberculosis. Here’s a photo of her in her nun’s garb:

Here are the strikers; their action gave rise to the powerful United Auto Workers Union:

They were both electrocuted on June 19.

Here’s Mandela and his then wife, Winnie, on the day of his release: 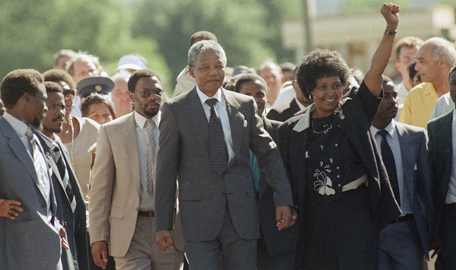 As Wikipedia notes, “The worm was created by 20-year-old Dutch student Jan de Wit, who used the pseudonym “OnTheFly”, on 11 February 2001. It was designed to trick email users into clicking to open an email attachment ostensibly appearing to be an image of the professional tennis player Anna Kournikova, but instead hiding a malicious program. The worm arrived in an email with the subject line “Here you have, ;0)” and an attached file entitled AnnaKournikova.jpg.vbs. When opened in Microsoft Outlook, the file did not display a picture of Kournikova, but launched a viral VBScript program that forwarded itself to all contacts in the victim’s address book.[2]

You could do worse than read Leigh Fermor’s great travel books; my favorite is Mani: Travels in the Southern Peloponnese , as I myself traveled in the Mani (a wonderful place).  What a life the man had!

Those who hied themselves underground on February 11 include:

Plath, of course, committed suicide at age 30; it was a great loss: 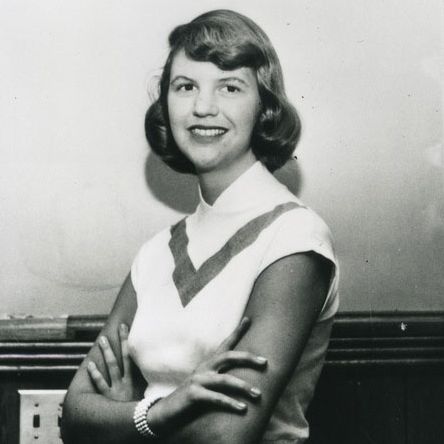 Powell was a great dancer and could almost hold her own with Fred Astaire (nobody could, really). Here they are doing a tap routine to “Begin the Beguine” from the movie Broadway Melody 1940. What a number: to my mind, the greatest routine Astaire and a partner ever had. 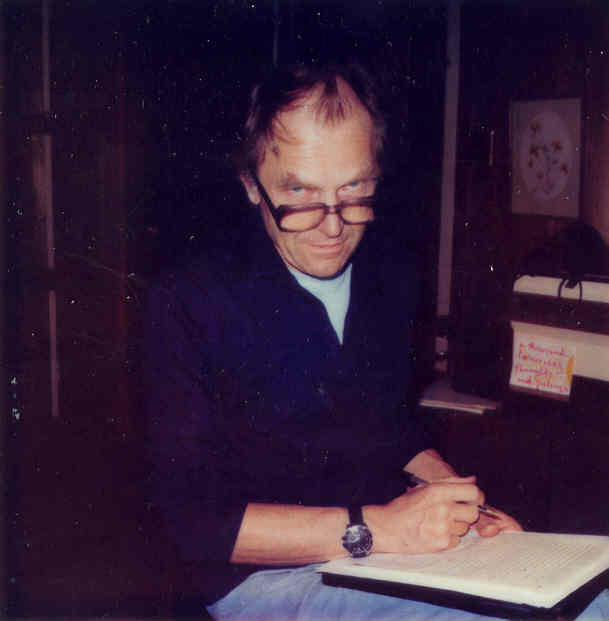 Meanwhile in Dobrzyn, Hili doesn’t want to share a lap with Szaron:

Małgorzata: There is a place for both of you here.
Hili: This is not the right solution. 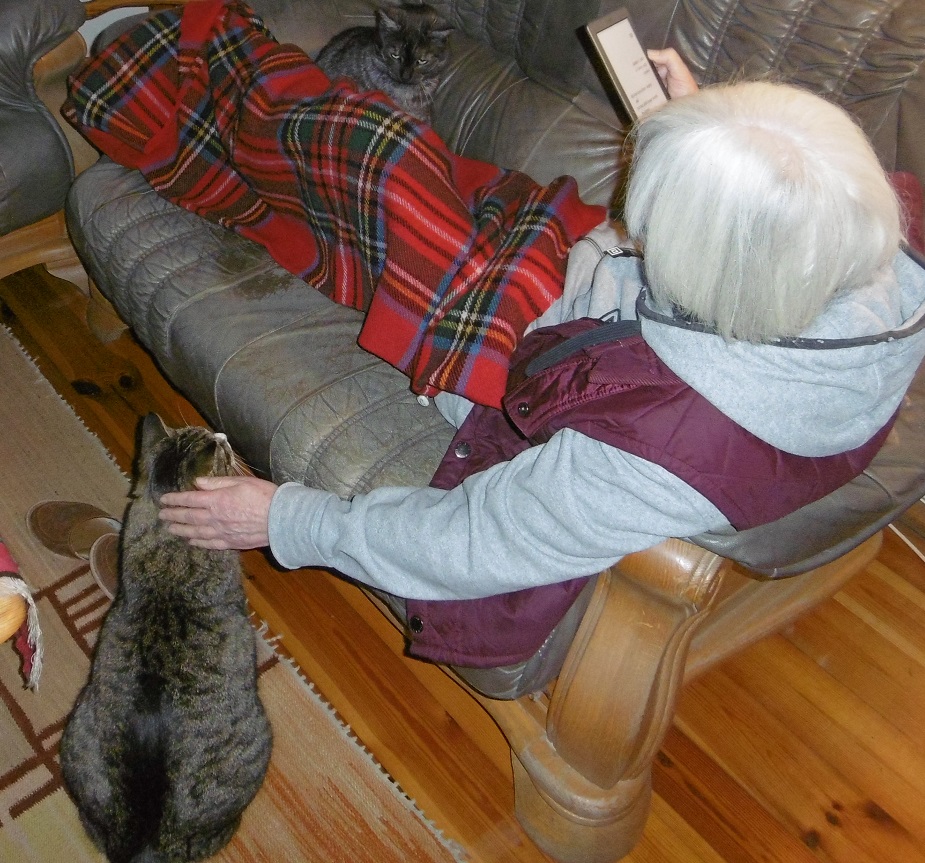 Elzbieta sends a photo of Mietek, enacting what how the cat sees what kids really do during online instruction:

And here’s Szaron out in the snow: 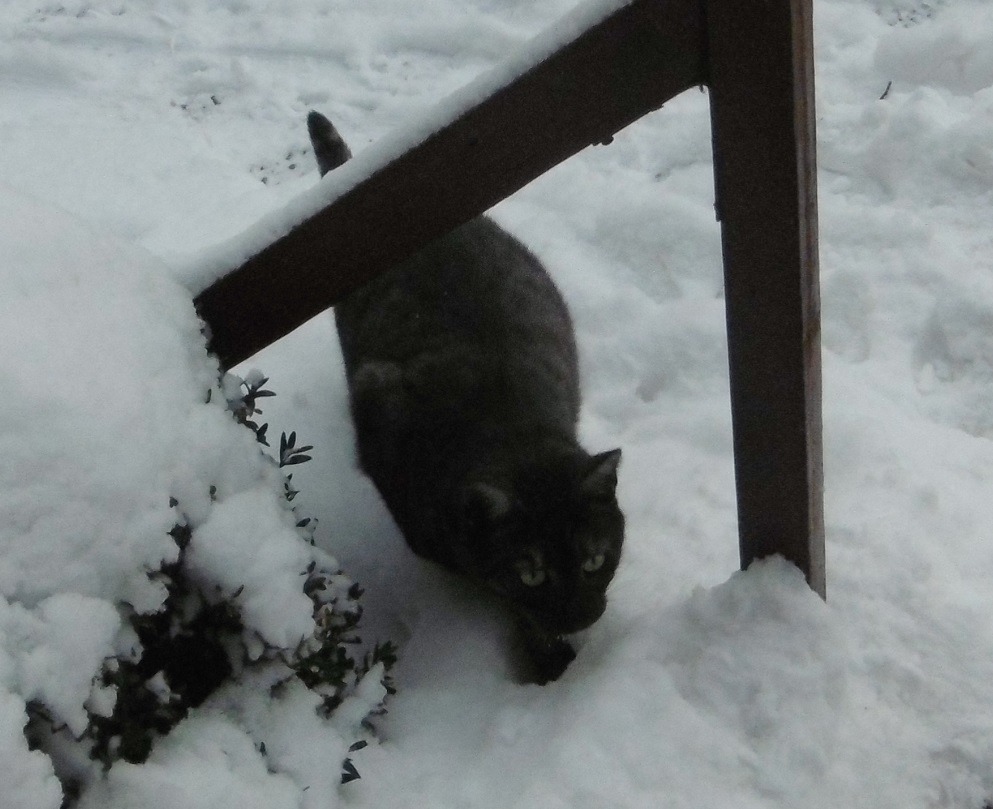 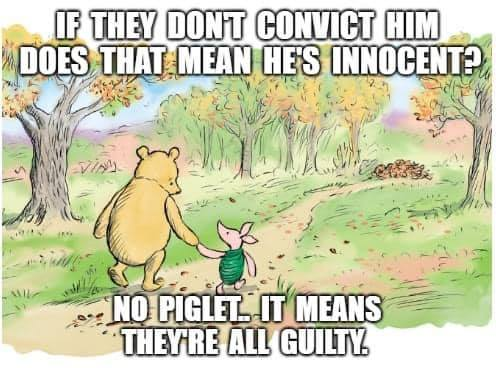 From Diana. I’ve checked on most of these, and the deplatforming were correct, though groups like “cobras” aren’t monophyletic but folk groupings: 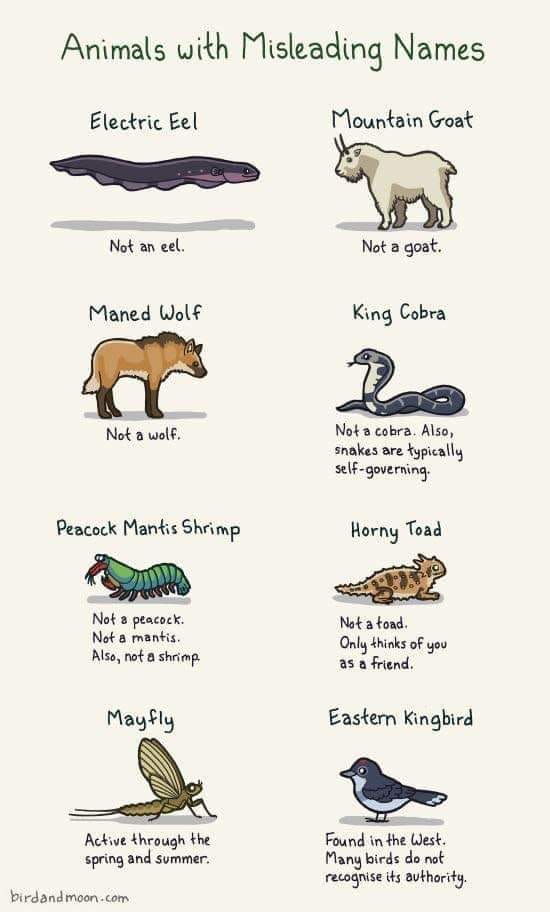 From Bruce. It recalls the Shakespeare line, “With what I most enjoy contented least.” 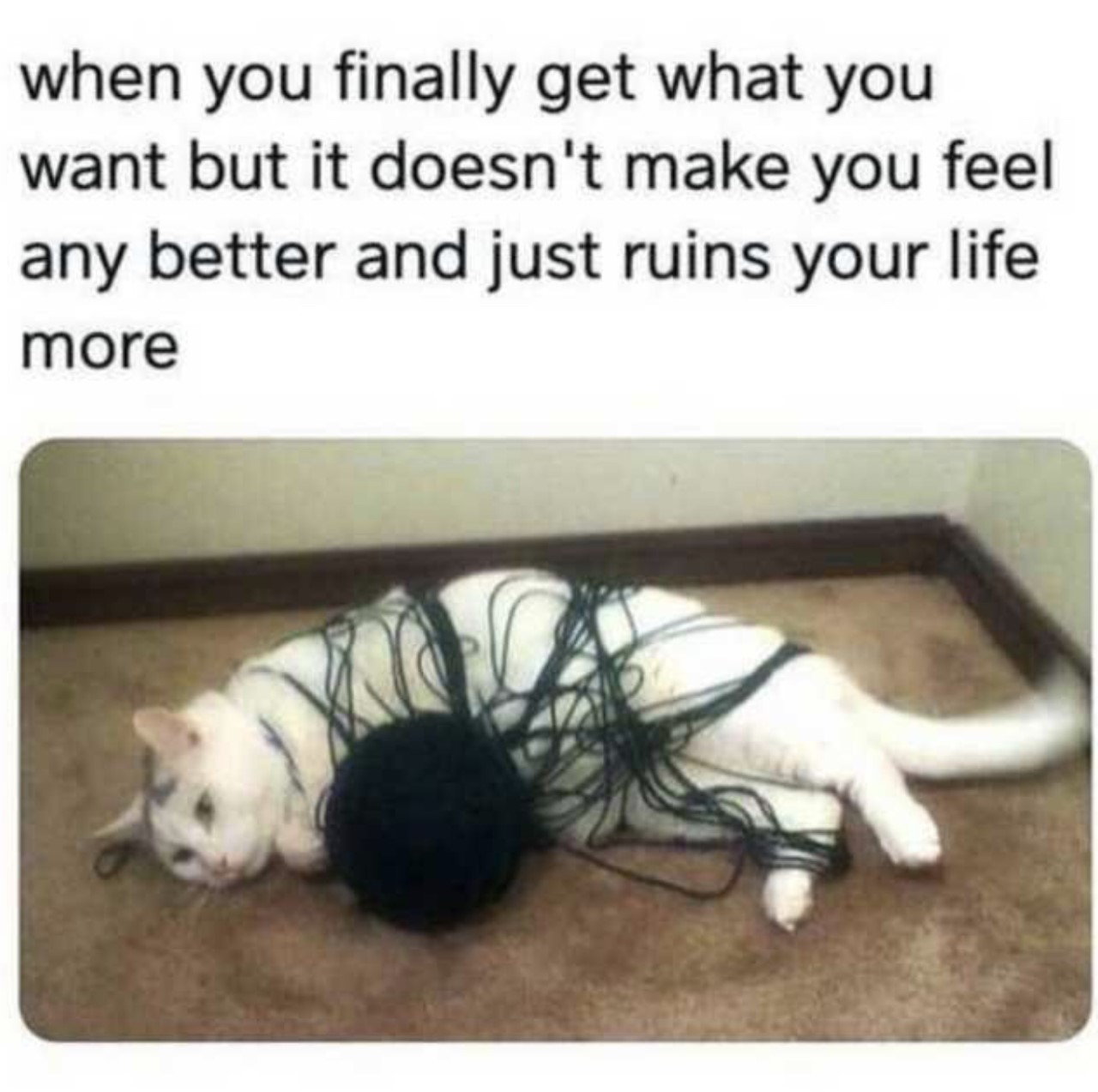 Titania calls out the world’s insanity. Have a look at the Twitter exchange she shows here:

The world always takes a while to catch up with my ideas, but it gets there in the end… pic.twitter.com/P7nUalTz5Y

A tweet from Luana by a disaffected African-American woman:

Reader Pyers says this: “This is, without doubt, the best twitter thread that I have seen for a very long time.  Whether it is suitable for your not-a-blog I don’t know but is is brilliant – with even GCHQ pitching in!”

I have sent it to my British friend Andrew, who taught me to eat and to love Weetabix (though also to never eat them in odd numbers). I expected an explosive reaction. But what he said was this:

Combined: the two very best features of the British breakfast.  What could go wrong?

Of course that’s a negative reaction, but a subtle one. Do read the followup tweets.

Why should bread have all the fun, when there's Weetabix? Serving up @HeinzUK Beanz on bix for breakfast with a twist. #ItHasToBeHeinz #HaveYouHadYourWeetabix pic.twitter.com/R0xq4Plbd0

From Matthew, we have a video that I’ve gotten from at least two dozen readers. If anything is viral, this one is.

“I can see that,” responds judge pic.twitter.com/HclKlAUwbM

Expect to see a gazillion cat/lawyer memes in the next few days. Here’s one from reader David: 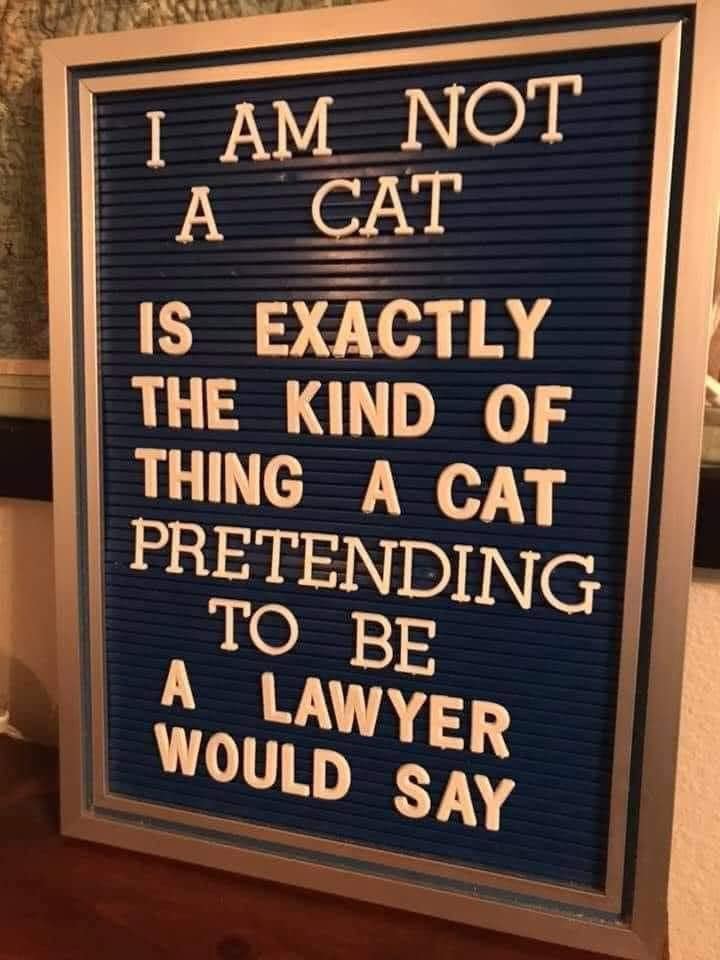 It’s sort of sad that Pete Best is still touting his brief membership in the Beatles:

Just been reminded. Sixty years ago today we, the Beatles played the original Cavern Club for the first time and a lot of times after that. I believe only Paul and I have played the new one. pic.twitter.com/3Chk9Ec1xp

I can’t believe this guy doesn’t close the door. Of course, the cat would only scratch and pound on it.

This is a video from my neighbor in Paradise AZ from earlier this summer. This sure seems like unusual behavior for a skunk, but what do I know? @PeccaryNotPig pic.twitter.com/7BHPlK0khr