Good morning on a freezing day in Chicago. Right now (6 a.m.), the temperature is 7°F, or -14°C, and Botany Pond is nearly frozen over. And here are the week’s predicted temperatures in both Fahrenheit and Celsius, in that order. Both high and low temperatures are shown:

The highest high temperature for this week is only 23°F (-5°C), and it will be even colder as there will be wind chill.  Note three days have predictions of snow. OY!

It’s the Sabbath: Saturday, February 6, 2021, and National Chopsticks Day at Foodimentary. I use the utensils several times a week, but chopsticks are not food! It’s also International Pisco Sour Day (a good drink), Ice Cream for Breakfast Day, National Frozen Yogurt Day (wasn’t that yesterday as well?), Lame Duck Day, noting the day in when the Twentieth Amendment (dealing with when Presidential terms begin and end) was passed, and International Day of Zero Tolerance to Female Genital Mutilation. In California it’s a state holiday, Ronald Reagan Day: the Gipper was born on this day in 1911.

Most important: WISDOM DID IT AGAIN! What a bird! 70 years old and with a new chick.  Matthew tells me that among mammals, only humans and orcas have menopause, and clearly albatrosses don’t, either.

WOW: The world’s oldest known, banded wild bird, Wisdom, has hatched another egg! She’s at least 70 years old & has raised over 30 chicks in her lifetime https://t.co/39iXtExdPQ

Johnson & Johnson has requested emergency FDA approval of its Covid-19 vaccine, which is expected quickly. The vaccine has a 66% effectiveness against the virus, compared to 95% for the two mRNA jabs, but requires only a single dose and can be shipped and stored at refrigerator temperature. Anthony Fauci has advised Americans to get whatever vaccine is offered to them first.

In England, tests on the Oxford/AstraZeneca vaccine show it to have between 75% and 85% effectiveness, depending on the Covid strain, and it’s very effective against the dreaded South African variant.

The New York Times has fired two big-name reporters after “scandals.” One of them, Donald McNeil, did not deserve to be fired and his treatment by the Times, who initially defended him, was shameful. More on that later. The paper is absolutely hopeless, mired in a wokeness so extreme it’s destroying its reputation.

Kamala Harris cast her first tie-breaking vote in the Senate, on an amendment proposed by Chuck Schumer to Biden’s $1.9 trillion stimulus package, which itself seems headed for approval. From the NYT:

But it was at 5:34 a.m., 95 minutes before the sun rose in Washington, that [Harris] broke the tie that mattered.

“On this vote, the yeas are 50, the nays are 50,” she said. “The Senate being equally divided, the vice president votes in the affirmative and the concurrent resolution as amended is adopted.”

There was no mistaking the weight of those words. They advanced a hugely impactful piece of legislation, of course. But they also signaled that for two years to come, the single most influential voice in the United States may be that of Ms. Harris declaring, in the stiltedly third-person language of Senate procedure, which way the vice president votes.

Shortly before heading to the floor to vote, Harris wrote a note to Dianne Feinstein for reaching her 9,000th Senate vote, a landmark that didn’t matter to San Francisco, who erased Feinstein’s name from a public school last week.

Has anybody heard from Trump? Reading the news, it’s as if he no longer exists, and that’s fine with me.

Stuff that happened on February 6 includes:

I tried to find a photo of the “dies Solis” graffito, but failed. Readers can help if they wish.

The treaty (below) was signed by both British and Māori representatives, but the text, in both languages, differs, and that led to arguments about land and governance, which led to the subsequent New Zealand Wars of 1845-1872. 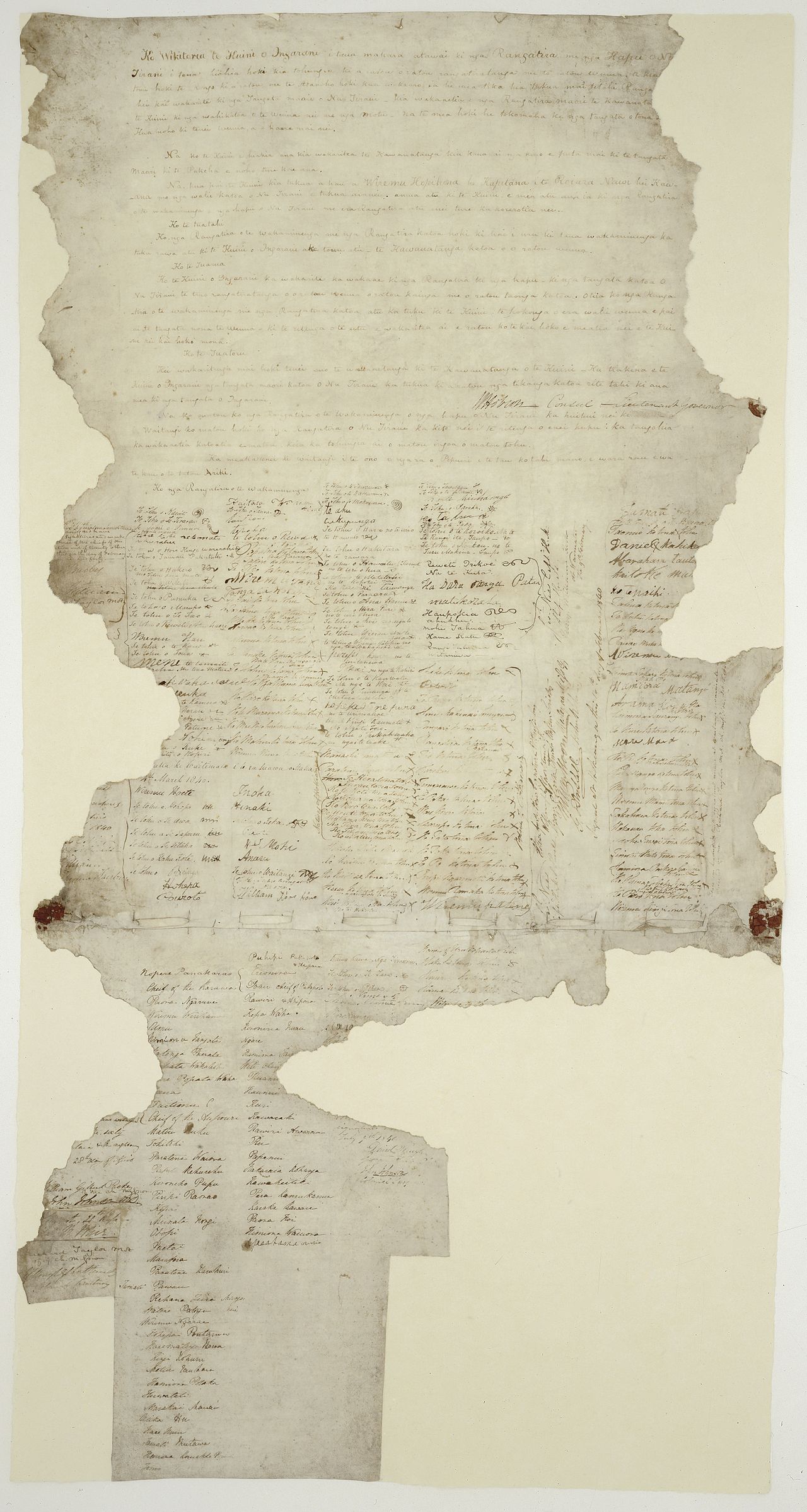 For the royal lovers among you (most of our British readers seem to approve of retaining the Royal Family), here’s a photo of Elizabeth after her coronation:

I remember this well, as I lived in Cambridge, MA at the time. The snow, after it was plowed, was still at the level of the tops of parked cars. Everything came to a standstill, and students were doing downhill skiing on the huge piles of plowed snow in Harvard Square. I have photos, but they’re in slides.

Here’s a video of that contest:

Here’s Eva and H*tler. Both of them loved dogs.  They were married as the Russians closed in on the Hitler Bunker, and committed suicide one day later. Hitler had his dog, Blondi, poisoned with cyanide and her puppies shot. Since this photo is from 1942, the German Shepherd is Blondi. 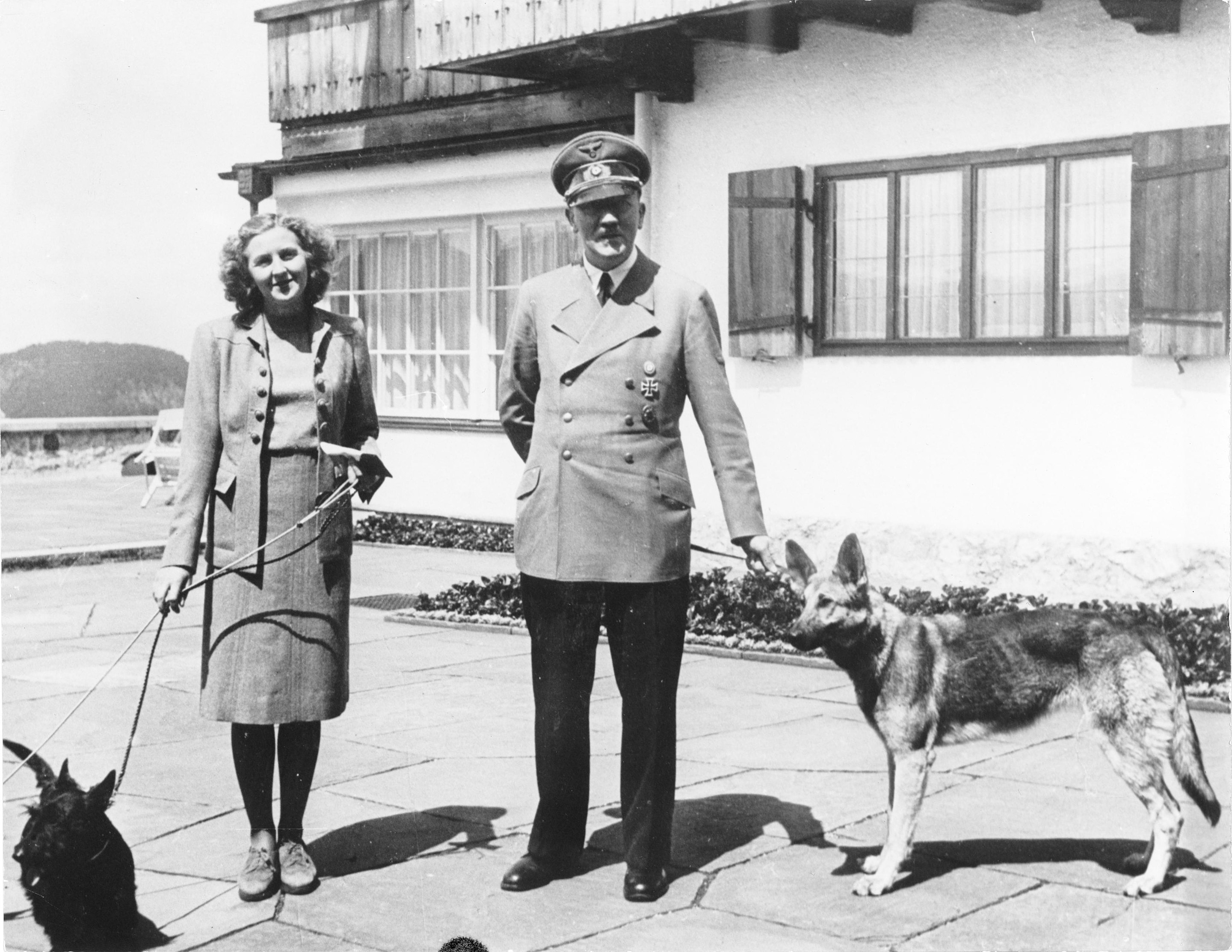 Astley’s greatest achievement was this.

Those who began playing the harp on February 6 include:

Here’s Klimt with his kitty: 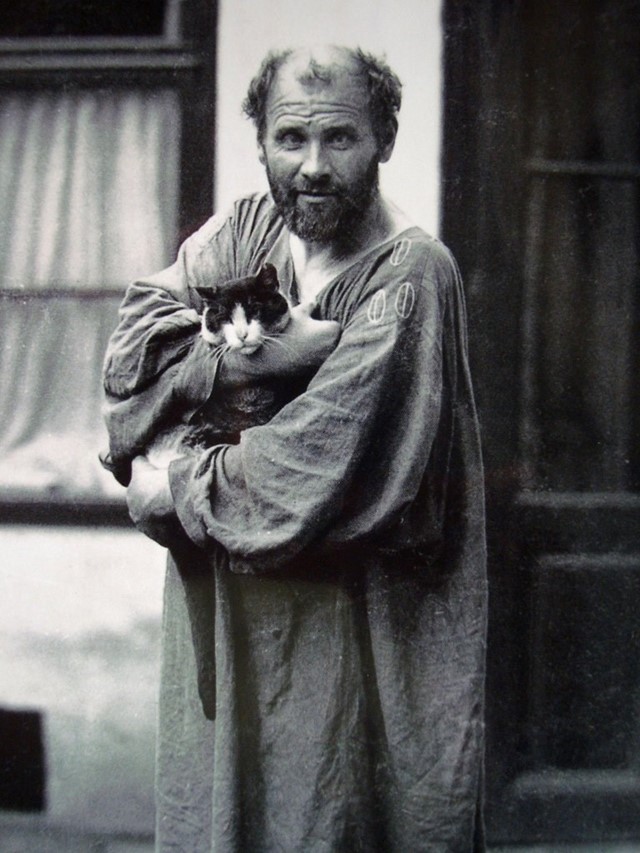 Meanwhile in Dobrzyn, Hili, sick of winter, is doing an experiment.

A: What are you doing?
Hili: I’m trying to see whether I can hibernate. 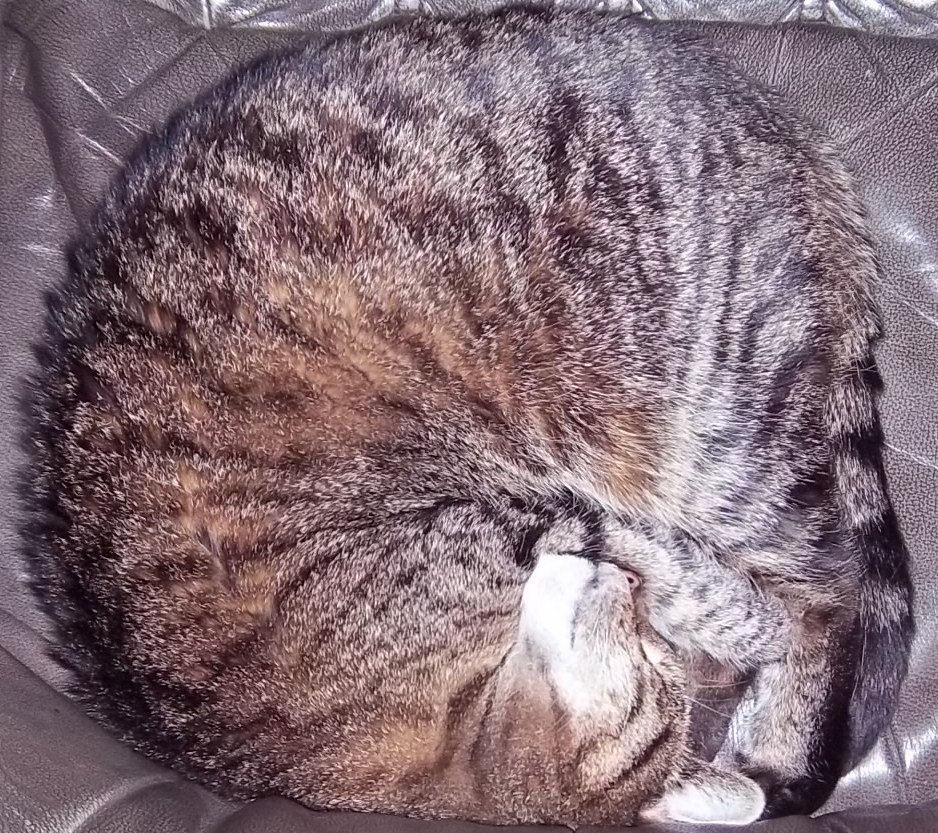 And here’s a lovely head shot of Szaron by Paulina; 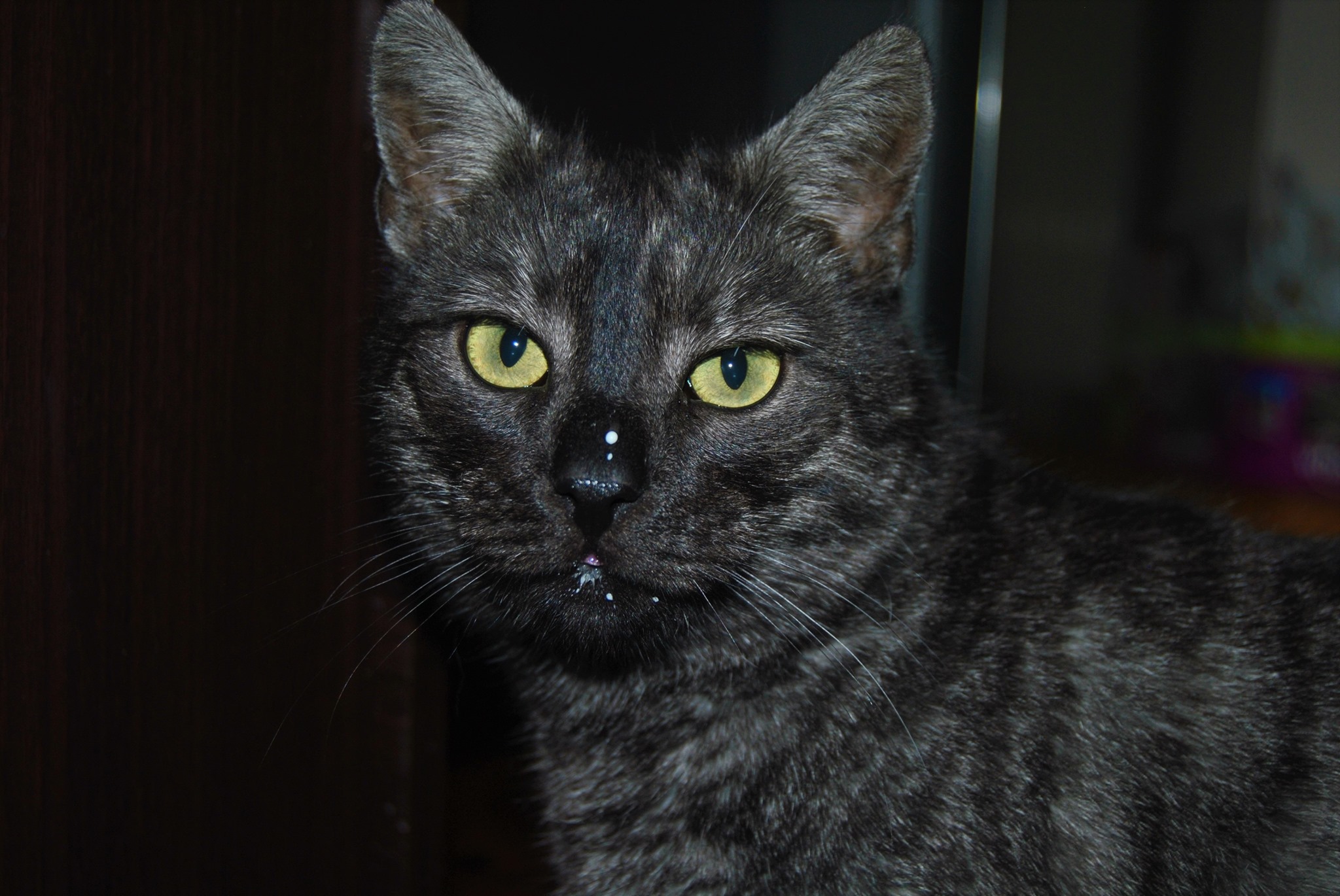 A great meme from Irena: 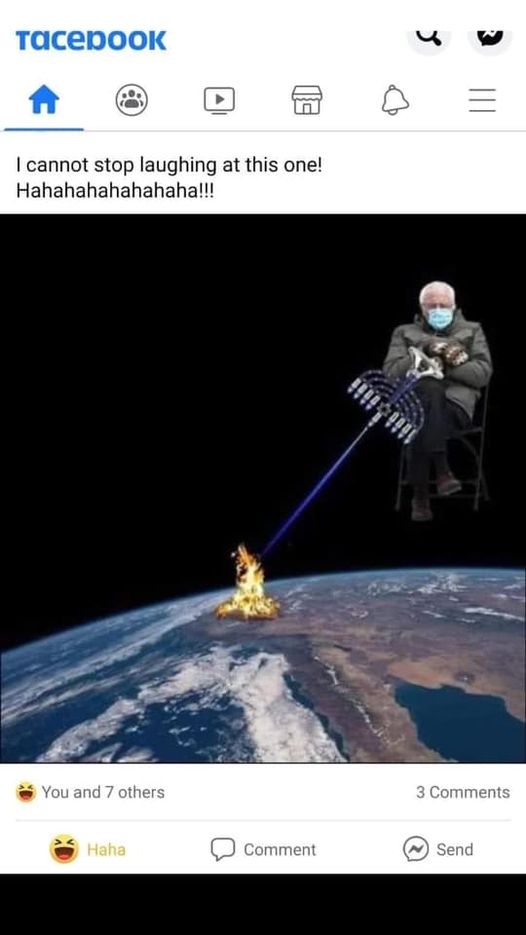 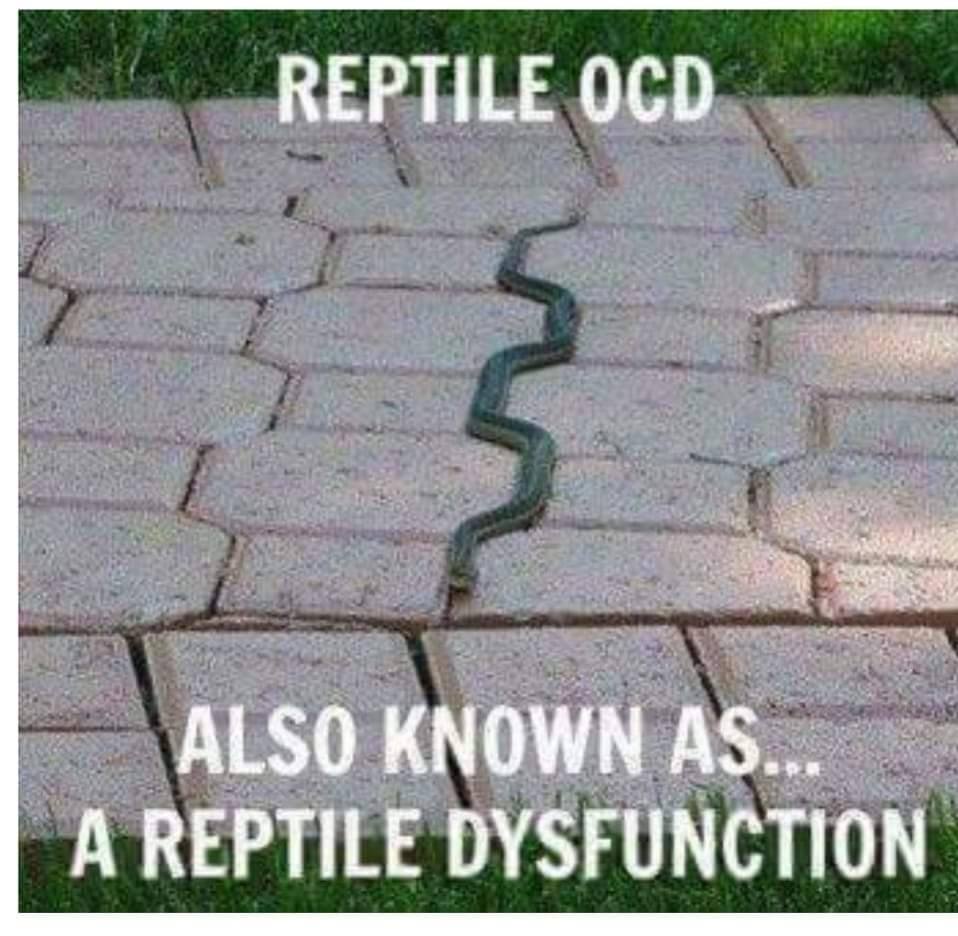 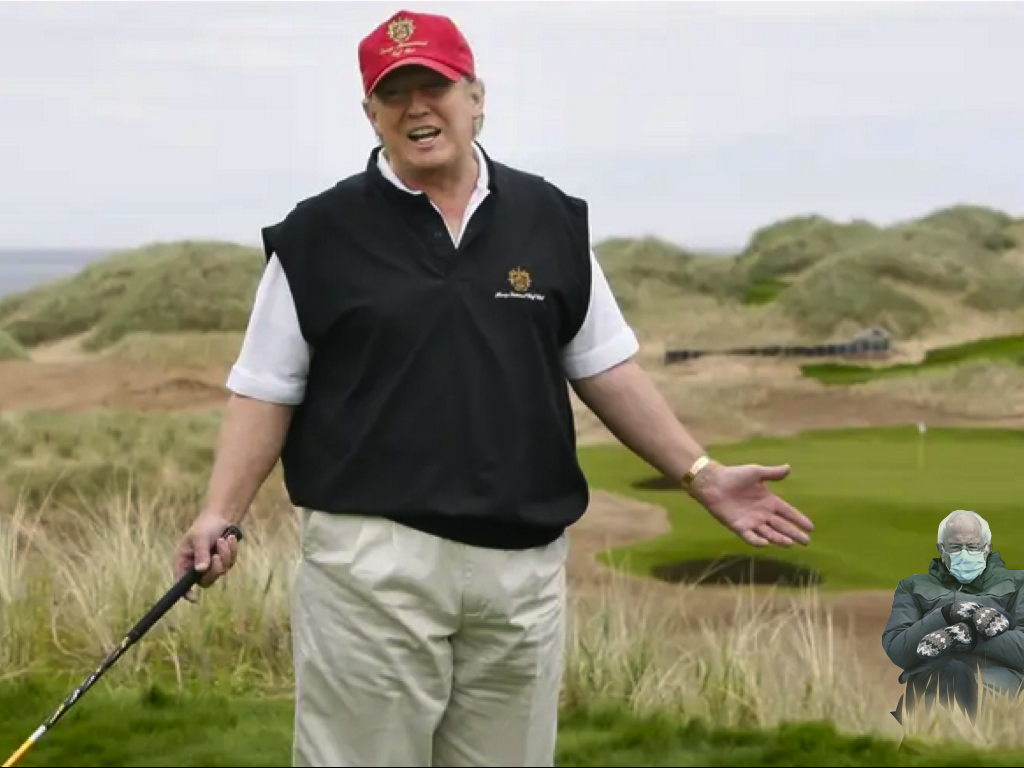 From Luana: McWhorter vs. Kendi. Kendi’s statement is sufficient for his followers to label him a transphobe, but you can be sure that nobody is going to call him for it.  That is known as a double standard.

And yet somehow this will be allowed to pass as okay because he's … well, I'll just leave it there. https://t.co/FaCVN0IPNq

My cartoon in today’s @NewYorker pic.twitter.com/imwZgDQdks

From Ken: Trump resigned from the Screen Actors Guild after they scheduled a disciplinary hearing (he had bit parts in some movies), but, in the letter, pretends not to care. Their response to his resignation is great.

Former President Trump has resigned from the Screen Actors Guild after they ordered a disciplinary hearing into his membership following US Capitol attack. (h/t @kristincbrown)

In his resignation letter, he said of the hearing: "Who cares!"

From Merilee: a tweet that encompasses all important memes of the last year (sound up):

This one has everything. pic.twitter.com/hpFRCDtL1k

Oh to be as content as our neighbours cat after breaking into our house and making itself comfortable on the bed pic.twitter.com/J3N9TeXnNj

Honey buzzards (Pernis apivorus) aren’t really buzzards but, as you can see, are more closely related to kites.  They feed on the larvae and nests of wasps and hornets, and are the only known predator on the Asian Giant Hornet. Wikipedia says this about them:

[The honey buzzard] spends large amounts of time on the forest floor excavating wasp nests. It is equipped with long toes and claws adapted to raking and digging, and scale-like feathering on its head, thought to be a defence against the stings of its victims. Honey buzzards are thought to have a chemical deterrent in their feathers that protects them from wasp attacks.

What an extraordinary photograph! That’s a honey buzzard with a big slab of a wasp nest full of wasp larvae, which make up most of its diet. The grown up wasps ain’t too happy about it…..

The tweet above seems to have disappeared but I found the photograph on reddit, though without attribution: 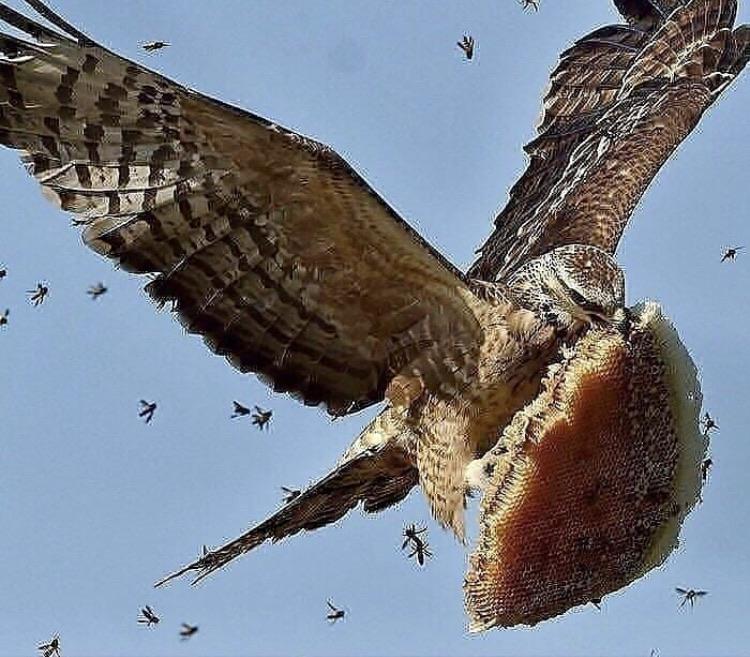 Ricky Gervais may be splenetic and dolorous, but he’s a softie when it comes to his cat Pickle:

A couple of magnificent animal poos:

What is the most magnificent feces you’ve ever seen in the wild? I’m talking stop-in-your-tracks-to-take-a-picture poo.

For me it was this bedazzled skunk scat full of the shimmering exoskeletons of fiery searcher beetles seen on the U.S-Mex border in AZ. pic.twitter.com/j419WumVUm