Here’s the bad news to start off with, presaging no early end to the polarization of America (h/t: Matthew)

A new CNN poll finds that 75% of Republicans, and 85% of those who approve of Trump, believe Biden didn't legitimately win enough votes to win the presidency:https://t.co/qatpn19z2f

The extent of the Big Lie's hold on Republicans is becoming depressingly clear: https://t.co/reCFweaEK6

As of Wednesday, Donald Trump will no longer be President, and I for one am looking forward to a time of relative calm and rebuilding, if not “healing”. But I’m also curious as to what will happen to the Republican party, and a bit fearful of what the gun-hugging loons are going to do on Wednesday, or when the Democratic Congress starts undoing all of Trump’s changes. Washington D.C. is now closed to those who want to watch the Inauguration live; we’ll have to resort to television and and President behind bulletproof glass.

In the meantime, while the days of Trumpism dwindle down to an unprecious few, we have two final cris de coeur giving a final assessment of the Trump presidency.  Nick Cohen ponders whether it’s correct to call Trump a fascist, while Andrew Sullivan is taken aback by Trump’s participation in the Capitol insurrection.

Cohen first, as what he says seems more thoughtful. Click on the screenshot (h/t Jez) 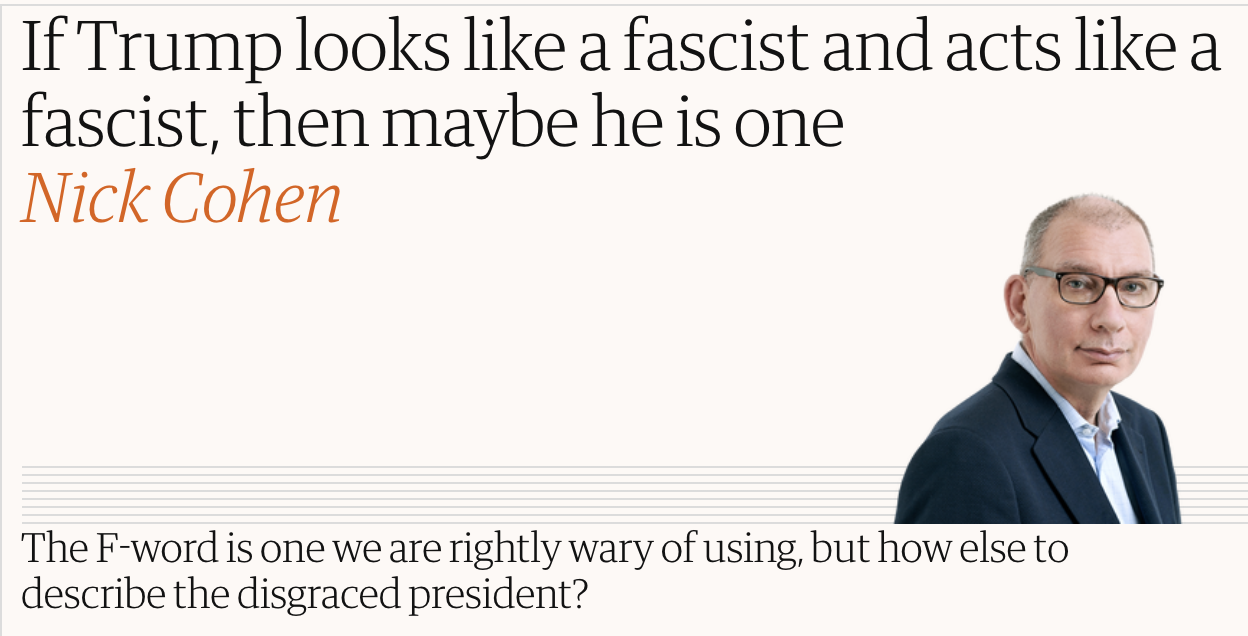 For Cohen, the word “fascist” is not to be used lightly; as he says:

The use of “fascism” in political debate is both a call to arms and a declaration of war. For once you say you are fighting fascism there can be no retreat. By talking of “pre-fascism” or “neo-fascism”, you acknowledge that the F-word is not a bomb you should detonate lightly; you also acknowledge the gravity of the times.

But he then disposes of two alternative adjectives: Trump’s not a “conservative” because his views and actions don’t comport with what people have usually meant by the term. Nor is Trump a “populist” because, says Cohen, he’s not supporting the people against elites: Cohen avers that it’s itself elitist to “[deny] the result of the people’s vote with the big lie, the Joseph Goebbels lie, that Trump won the election he lost and then [to incite] brainwashed followers to storm democratic institutions”.  Well that sounds like populism to me, at least according to the Oxford English Dictionary’s definition:

POPULISM. The policies or principles of any of various political parties which seek to represent the interests of ordinary people, spec. of the Populists of the U.S. or Russia. Also: support for or representation of ordinary people or their views; speech, action, writing, etc., intended to have general appeal.

Some have compromised by calling trump a “proto-fascist” or “pre-fascist”, but Cohen dismisses those terms as well, and for three reasons you can read about in his piece. For Cohen, the term “fascist” winds up perfectly appropriate for Trump because of his incitement to overthrow a democratic election. In particular, Cohen dismisses the argument that Trump shouldn’t be called a fascist because he hasn’t yet “transformed his society into a totalitarian war machine”:

The example of the stages of cancer, so beloved by believers in Trump derangement syndrome, explains the stupidity. Imagine you are a doctor looking at pre-cancerous cells or an early-stage cancer that has not grown deeply into tissue. The door bursts open and a chorus of Fox News presenters and Cambridge dons cry that “real experts in the field” agree that on no account should you call it cancer until it has metastasised and spread through the whole body. A competent doctor would insist on calling a fatal disease by its real name and not leave treatment until it was too late to stop it. So should you.

Well, no, it’s not a fatal disease until it’s become terminal, so the metaphor is weak. In truth, this does seem to be a quibble about labels, informed though it is by Cohen’s knowledge of history. We know what Trump is, and does it really make a difference if, technically, he’s a fascist or not? Our drive to ensure that he never again holds the reins of leadership doesn’t depend on a label, but on his past behaviors.

At the Weekly Dish, Sullivan calls for Trump’s impeachment and conviction, pretty much also on the grounds that he is a fascist, de-legitimizing a democratic election whose results were audited and found correct (click on the screenshot): 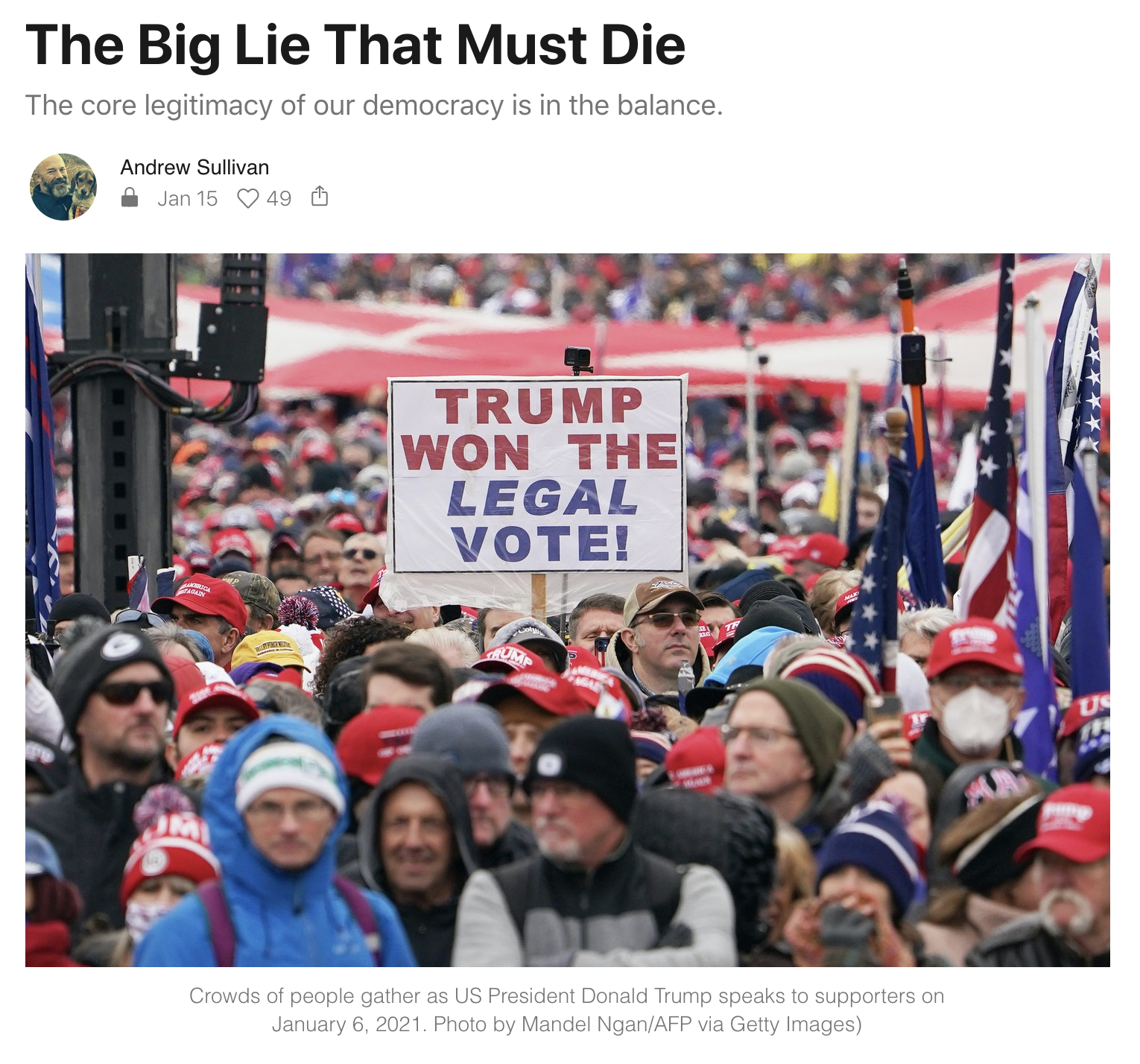 This is why Trump should be impeached and convicted in the Senate. Not because he directly incited a riot against members of Congress and his own vice-president — and chose not to intervene while it continued. It’s that Trump has repeatedly, insistently and emphatically attacked the legitimacy of the entire democracy he is in charge of. This is not just a Big Lie, as others have noted. It’s the Biggest Lie Imaginable. It’s arsenic to a functioning democracy, and Trump has long injected it directly into the veins of the American system.

. . . Trump is leveraging the authority of his office — the highest in the land — to destroy the legitimacy of our entire system, and of the next president: “By the way, does anybody believe that Joe had 80 million votes? Does anybody believe that? He had 80 million computer votes. It’s a disgrace. There’s never been anything like that.” Did he want an inquiry? Nah. He was quite clear what his immediate purpose was: “All Vice-President Pence has to do is send it back to the States to re-certify, and we become president.”

But before that, Sullivan emphasizes America’s increased polarization, due largely to the recalcitrance of the GOP:

You can see the difference between 2016 and 2020 in this stat: “In 2016, 52% of Democrats said Hillary Clinton’s loss to Trump was ‘legitimate and accurate,’” — pretty disconcerting for any democracy. But this year, only “26% of Republicans said they thought Trump’s loss was similarly legitimate.” In 2016, right after the election, 84 percent of adults believed the election was legitimate, with 15 percent opposed. In 2020, only 57 percent of Americans believed that Joe Biden was legitimately elected president, compared with 43 percent who didn’t. Among men, it’s 51 to 49 percent. Among those earning between $50K and $100K, it’s a 50-50 split. Among white men without a college degree, a clear majority, 62 percent, believe the election was outright stolen. That’s a huge torpedo hit below the waterline for our democracy.

Trump has already been impeached, though I doubt the upcoming trial will convict him since 17 Republican Senators have to vote for that result. Regardless, the system is now working as it should, though I think, in the interests of harmony (if that’s possible), Democrats should resist gloating. (Neither Cohen nor Sullivan are guilty of this.) As Michelle Obama said, “When they go low, we go high.”

Although I wasn’t that impressed with Sullivan’s piece, largely a regurgitation of previously-published views and statistics, his reason for impeaching Trump is at least interesting. Sadly, though, the one count of the indictment is not “repeatedly, insistently, and emphatically [attacking] the legitimacy of the democracy he is in charge of.” The insurrection is merely one aspect of those attacks, but the Senate has to vote on the charges, and one can make a superficially plausible case that Trump wasn’t inciting immediate and predictable violence. I don’t agree with that defense, but Sullivan’s own charge is irrelevant for the forthcoming trial.

62 thoughts on “Nick Cohen and Andrew Sullivan: Why Trump is a fascist and an insurgent”