It’s strange: I feel an unaccountable malaise today, unable to get down to doing anything, and I’ve already heard from three other people who have the same symptoms. Could it be that the first Monday of 2021 is giving us the blues?

All I’m capable of this morning is reviewing a movie I watched this weekend. There’s been a lot of buzz about 2020s Ma Rainey’s Black Bottom, a Netflix film adaptation of the eponymous play by the celebrated August Wilson. The movie was recommended by an old friend, but also by a reader here in the comments on my last movie post.

I haven’t seen the play—indeed, I hardly see any plays—so I was keen to see something by August Wilson. My overall take: it was a good movie but not a great one, seeming to me to be too much of a play with episodes and set pieces that, while very well acted, seemed contrived, as if the screenwriter was trying to cram too much into a 90-minute movie.

If you haven’t seen it, I won’t give any spoilers, but a brief summary is this: the movie is about power: the power that whites have over blacks, and how blacks try to fight it by asserting their own power. This theme is played out through two characters, the famous blues singer Ma Rainey, acted terrifically by Viola Davis, an Oscar winner. It’s 1925, and Ma has traveled north to Chicago with her lesbian lover and young nephew to record a few blues songs for a “race records” outfit. (The cinematography and re-creation of Chicago in that era is wonderful.) Having been at the mercy of whites all her life, Ma realizes that she is a gold mine for the white owners of the record company, and so demands to be treated like a queen. As she is the queen—of blues—the whites truckle before her, but only because she is a source of cash. She doesn’t come off as a likable person though, for she’s just plain nasty to everyone, black or white. If she’s to be the heroine of the movie, it didn’t work well. But maybe Ma Rainey really was a jerk.

Ma’s backed up at the studio by four black musicians, with the second protagonist being the trumpet player Levee, who has his own reasons to hate whites. Levee takes out his frustration in several ways, one of them being to make his own musical arrangements of Ma’s songs—something that she’ll have no part of. He also has ambitions to write his own songs and create his own band, a plan that the white studio owners have stymied. Levee is played by another terrific actor: the late Chadwick Boseman, who died last August of colon cancer, only 43 years old.

This is one movie that gives me trouble articulating why I don’t think it’s great, though it’s very good and you should see it. I suppose it’s because the pace is too fast, the language too quick and unrealistic (this was the problem with the execrable television show The Gilmore Girls, though the movie is far superior.) The movie, then, is a showcase for Davis and Boseman, each having episodes that made the movie seem play-like, and the dialogue pretty contrived. Boseman, for example, has three “telling” episodes: one in which he describes the incident that made him hate whites, another in which he curses God, arguing that no good god could exist given what Levee’s seen, and the final scene, which I won’t spoil.

Boseman’s acting is wonderful, and he’s been justly celebrated for his range and ability. I suppose I would have liked to see a longer movie with a slower pace, slower dialogue, and with an ending that didn’t seem so contrived.  Oh, and there wasn’t nearly enough music, but I guess since it’s an adaptation of a play, that’s understandable. After all, it’s about power, not the music itself.

But I do recommend it; it’s far better than most stuff you can see these days. After I finish this I’ll go look at the Rotten Tomato reviews, which I’ve avoided reading (and note them in an addendum below) to see if how many critics agree with me.

In the meantime, here’s the movie’s trailer, Netflix’s “making of” video, and a recording by Ma Rainey herself.

Netflix’s seven-minute “making of the movie” video, with biographical information about Rainey.

Here’s the original recording, Ma Rainey’s Black Bottom, recorded in Chicago, but in 1927, not 1925.

And here’s her band (photo from the link right above). 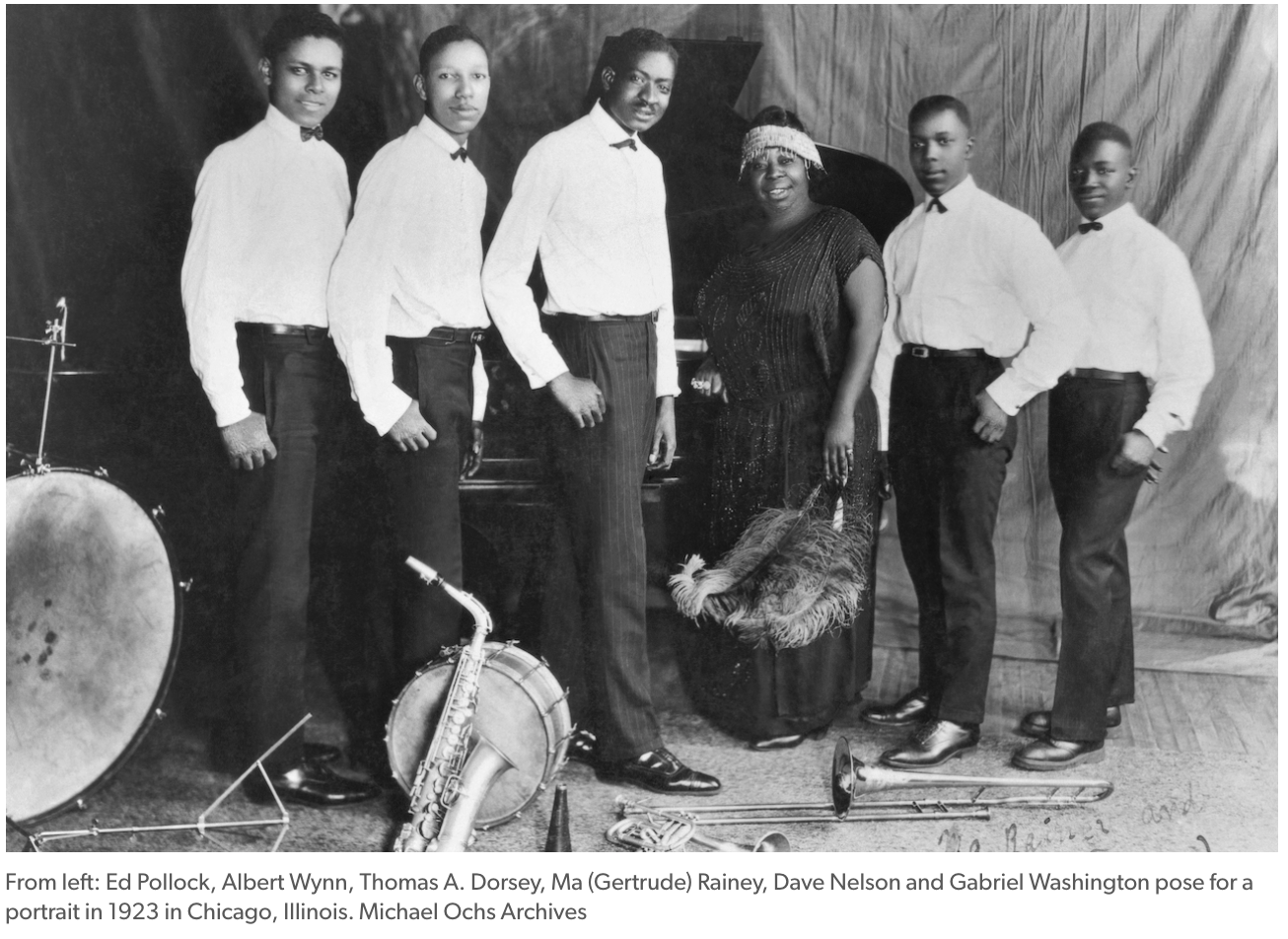 ADDENDUM: Okay, I went to Rotten Tomatoes after I wrote the above, and found that the movie has about the highest critics’ rating possible: 99% (233 critics!), with 80% of the audience liking it. (Click on screenshot): 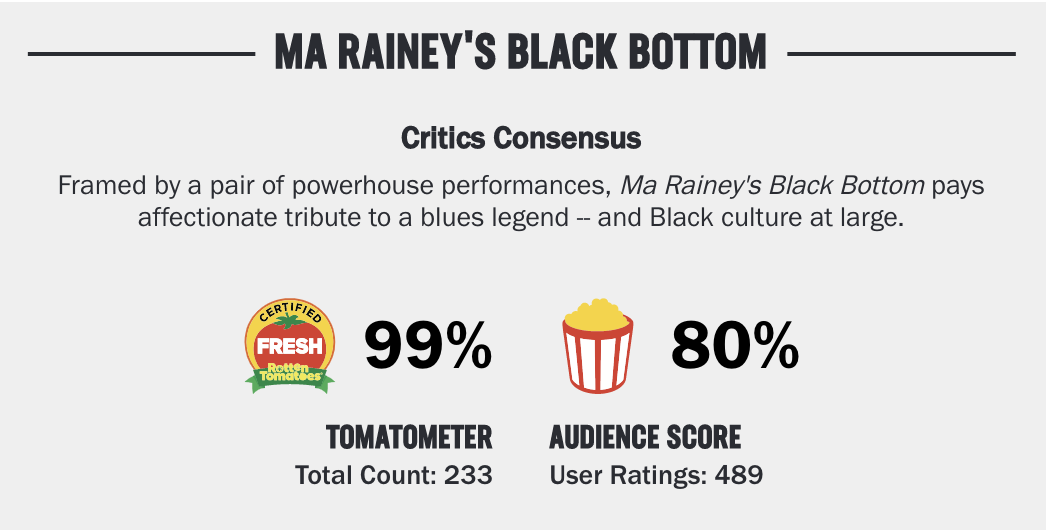 Of the 68 “top critics” who weighed in, only two—Angelica Jade Bastién from New York Magazine and Rafer Guzman from Newsday—didn’t give it the high “tomato” rating. Bastién is far harder on the movie than I am (she’s black, by the way), and you can read her review to see why she didn’t care for the movie at all (I also see that she agrees with me that Davis’s character is not a sympathetic one). An excerpt:

I don’t want to obscure the rot at the heart of this film. August Wilson may be a beloved playwright, as evidenced by how keen Hollywood is to adapt his work, but Ruben Santiago-Hudson’s version of Ma Rainey does nothing to show us why this is the case. The script touches on issues that have the potential to be powerful — Black intra-racial relations, the tension between northern and southern Black folks, the ways Black artists must navigate white power structures that seek to strip their work bare. But these issues are merely touched on, and the dialogue that otherwise surrounds them is stilted, laughable even. Take, for example, the moment when Levee, in seducing Dussie Mae [Ma’s lover] asks, “Can I introduce my red rooster to your brown hen?” A line that deserves an eye roll is instead received as if it is the height of seduction. Ma Rainey has the weight of Hollywood power players behind it, but it seems incapable or uninterested in taking advantage of the delights of what film can do.

I’m still keen to watch movies these days, so recommend some others below.