Tony Eales from Queensland came through with three batches of photos. Today we see the first one, whose theme is a subject dear to my heart—mimicry. Tony’s notes and IDs are indented; click photos to enlarge them.

Remember that in Batesian mimicry an edible “mimic” evolves to resemble a visible and toxic or dangerous “model,” protecting the former from predation by a third, predatory species that has either learned or evolved to avoid the model. In Müllerian mimicry, on the other hand, two toxic or distasteful species evolve convergently to resemble each other, which gives a selective advantage for the survival of each: it’s easier for a predator to learn and avoid one pattern rather than two.

Some recent examples of mimicry that I’ve photographed.

The first two are an example of Müllerian mimicry. Both the Velvet Ant (actually a wingless female wasp) Aglaotilla sp. and the Green-head Ant (Rhytidoponera metallica) possess a pretty nasty sting and inhabit the same habitat, leaf litter and tree trunks. A predator’s experience with one will inform their future interactions with the other. 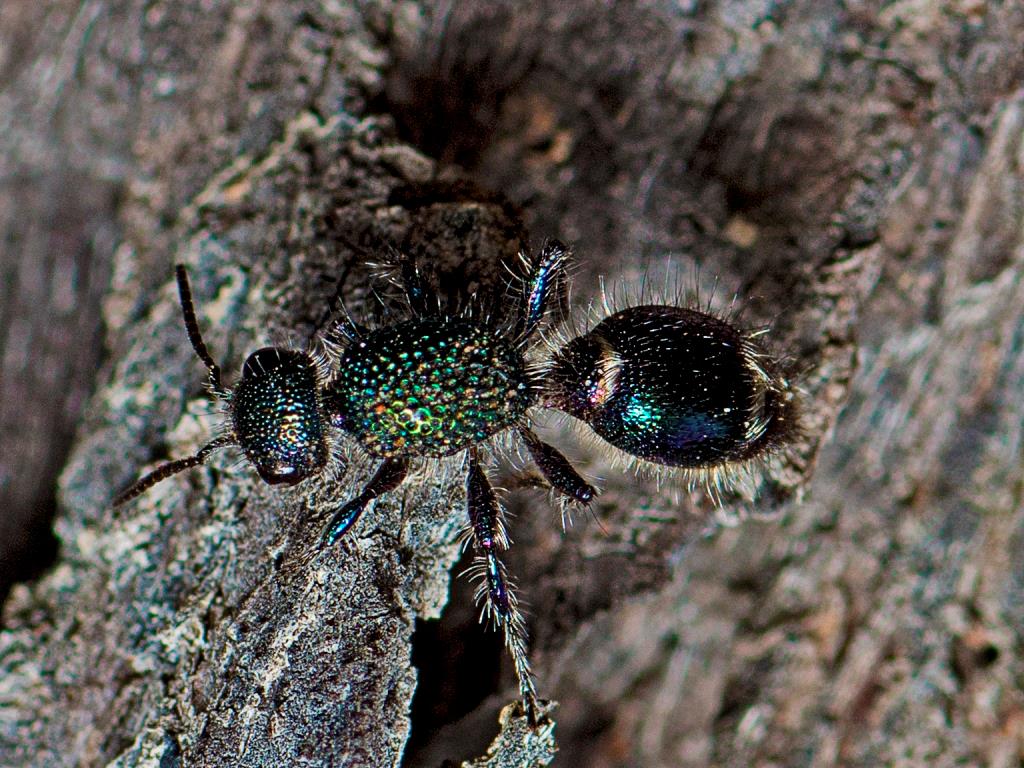 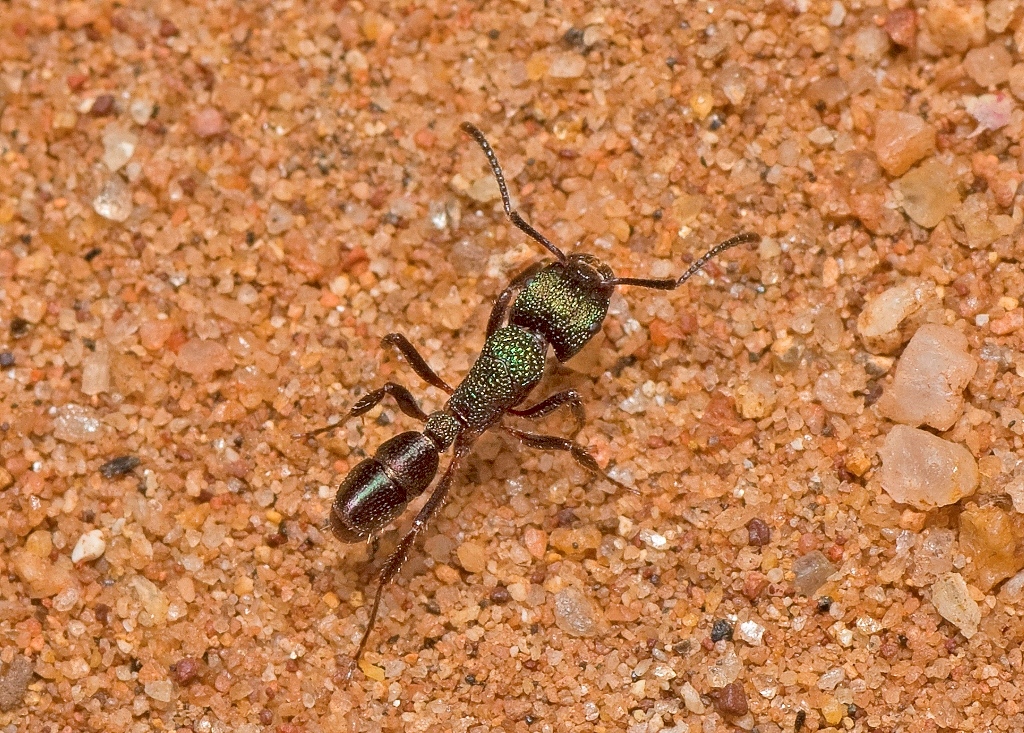 Next is an Ant-like Flower Beetle, Anthelephila sp. which are Batesian mimics of ants. They are not close mimics but the ant-like shape and the colour patterns are similar to many ant types— e.g., these Iridomyrmex purpureus Meat Ants—and probably confers some advantage. Given how common and varied ants are in the Australian bush, predators probably tend to just ignore anything ant-like. 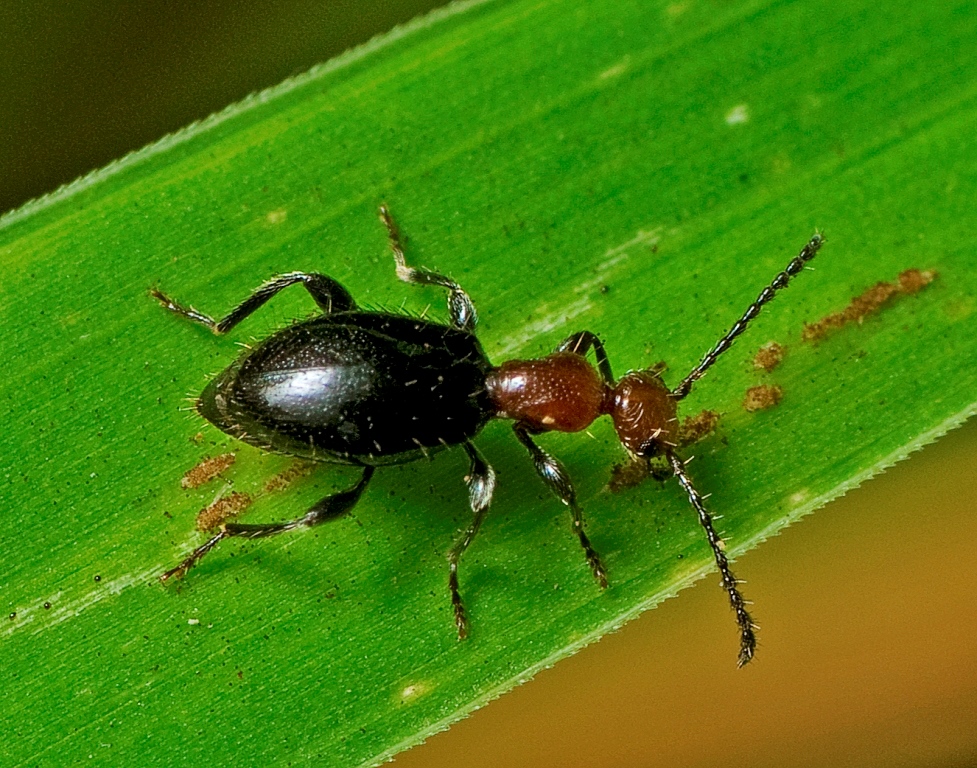 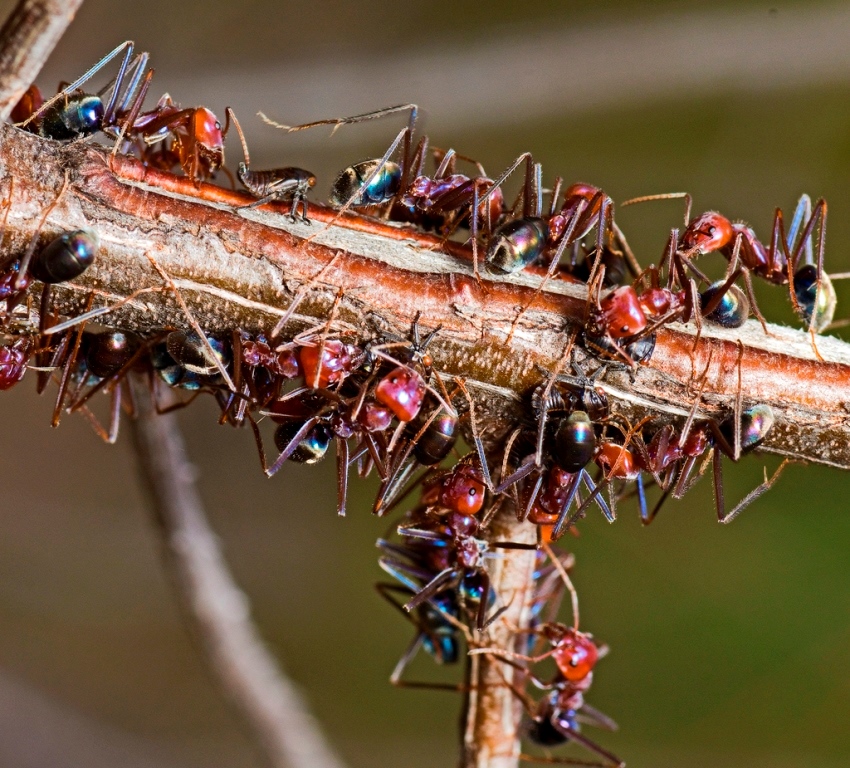 The next two are beetles mimicking beetles. Episcaphula rufolineata is in a group called the Pleasing Fungus Beetles (family Erotylidae) which, as the name suggests, feed on fungus and are often quite colourful. 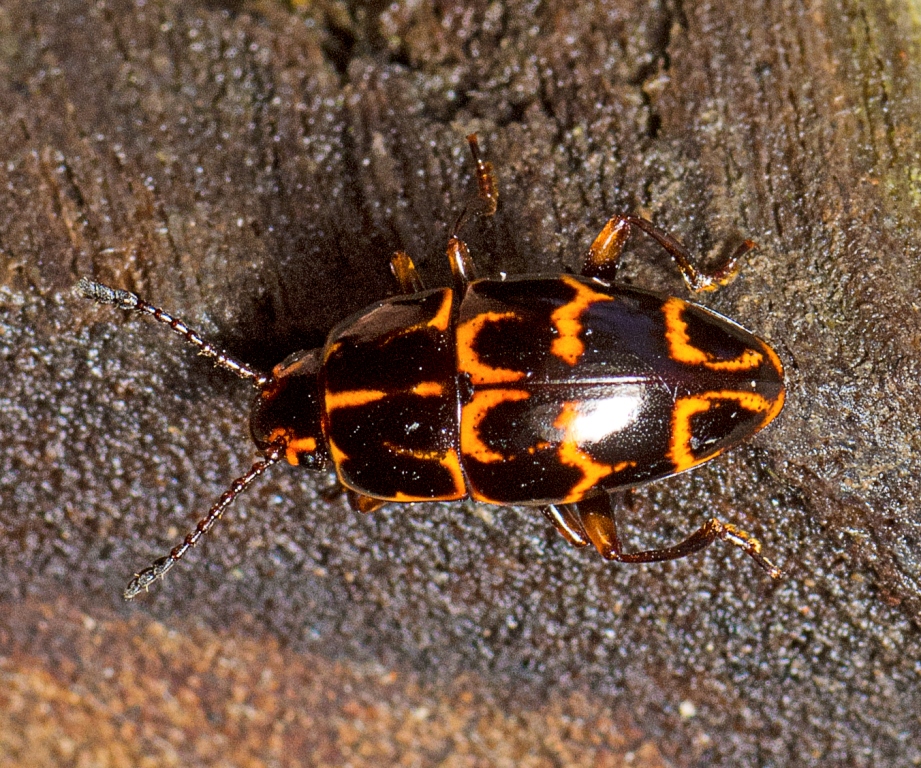 Scaphidium exornatum, on the other hand, is in the Scaphidiinae, the Shining Fungus Beetle sub-family of Rove Beetles. It also is found feeding on fungus in the same forests as E. rufolineata. 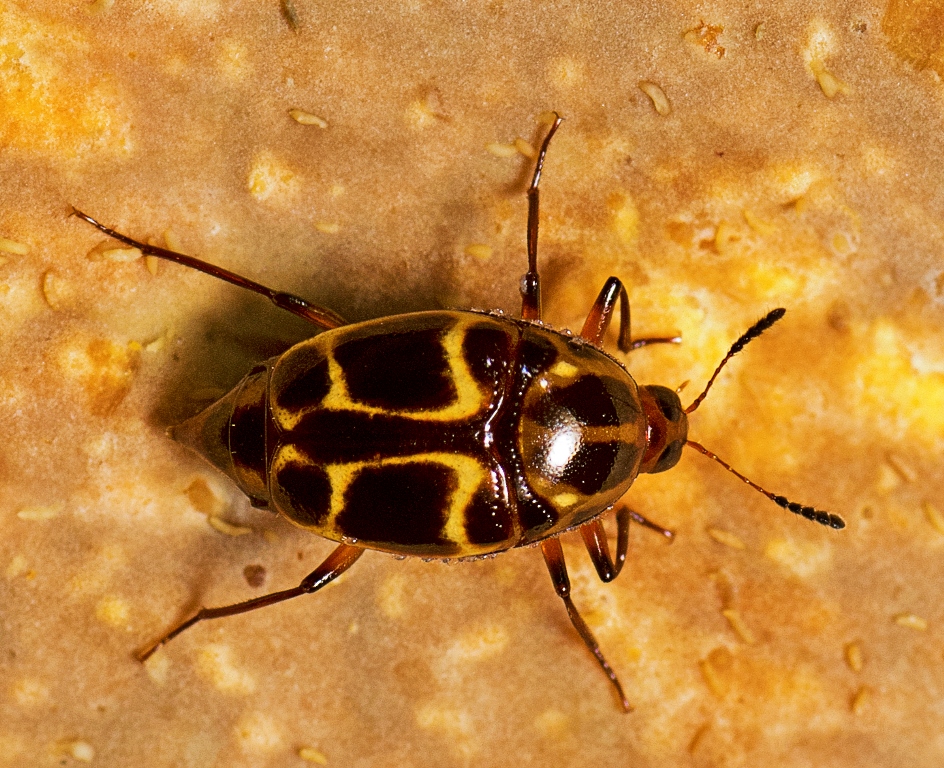 As you can see, they look very, very similar and without knowing what chemical defences either have, it’s hard to know if this is Batesian or Müllerian and which species was the model and which the mimic. S. exornatum doesn’t look like a typical Rove Beetle, but there are some strange looking Rove Beetles without any mimicry going on (try Googling Diatelium wallacei some time).

Not only are these two mimics not in the same beetle family, they are in different infraorders.

The next set of beetle mimics broke my brain. I don’t even know what is real any more. Lycid beetle mimicry is very common, among other beetles and also insects as different as flies and moths but the mimicry here is so perfect, I’m reluctant to ID another Lycid.

Trichalus ampliatus is a fairly common lycid beetle where I live, known as the Red-shouldered Lycid Beetle. I photographed one just the other day and put it up on iNaturalist as T. ampliatus only to be informed that no, what I was looking at was a member of the False-blister Beetle family Oedemeridae. To me the only difference I can see is the mouth parts. The texture of the wing covers, the look of the antenna, the colour, even the way it holds itself is a perfect match. Fittingly the genus is Pseudolycus. 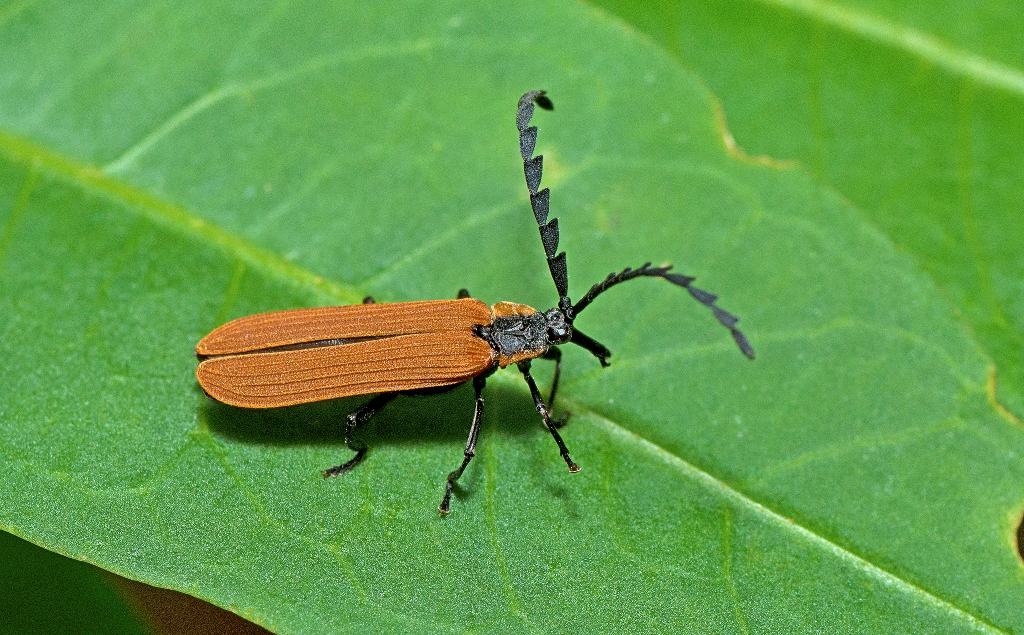 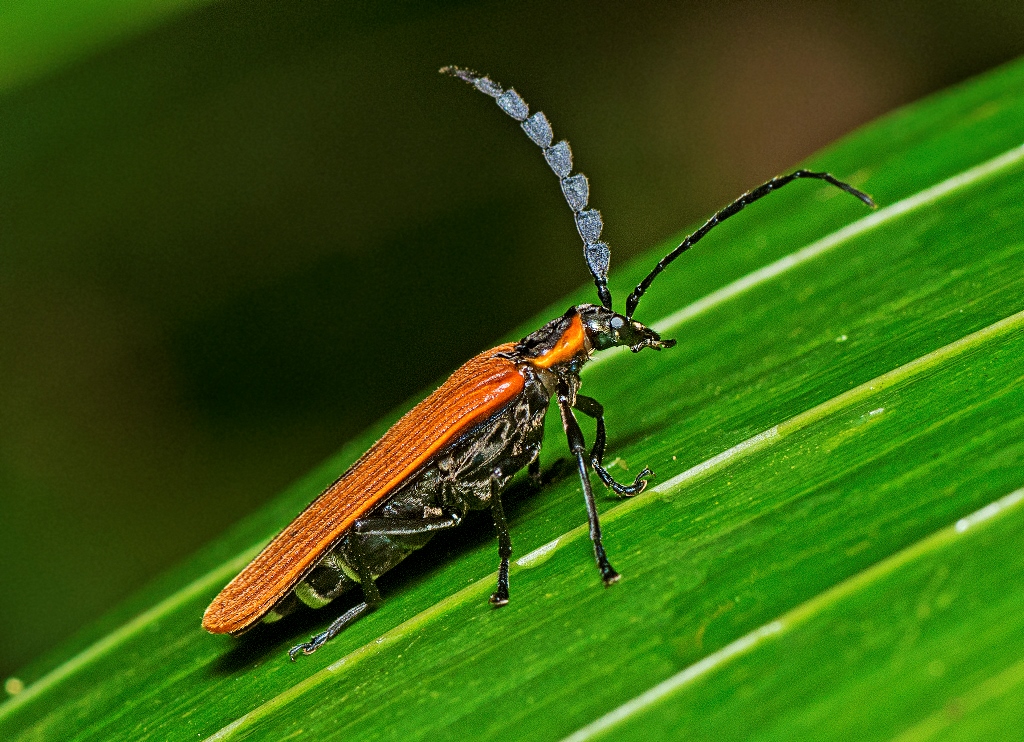 Last, a case of aggressive mimicry. [JAC: An animal evolves to further its aggressive behavior; in this case, a predator evolves to resemble its prey to fool them.]

The larva of the small ladybird known as the Mealybug Destroyer Cryptolaemus montrouzieri looks like a mealybug or scale insect. These bugs suck plant juices and excrete sugary waste that ants collect. The ants in turn defend the mealybugs from predators. But the Mealybug Destroyer larva looks like a mealybug and perhaps smells like one too. In addition, the waxy filaments are a good defence against ant aggression as well as protecting these insects from over-enthusiastic ant attention. 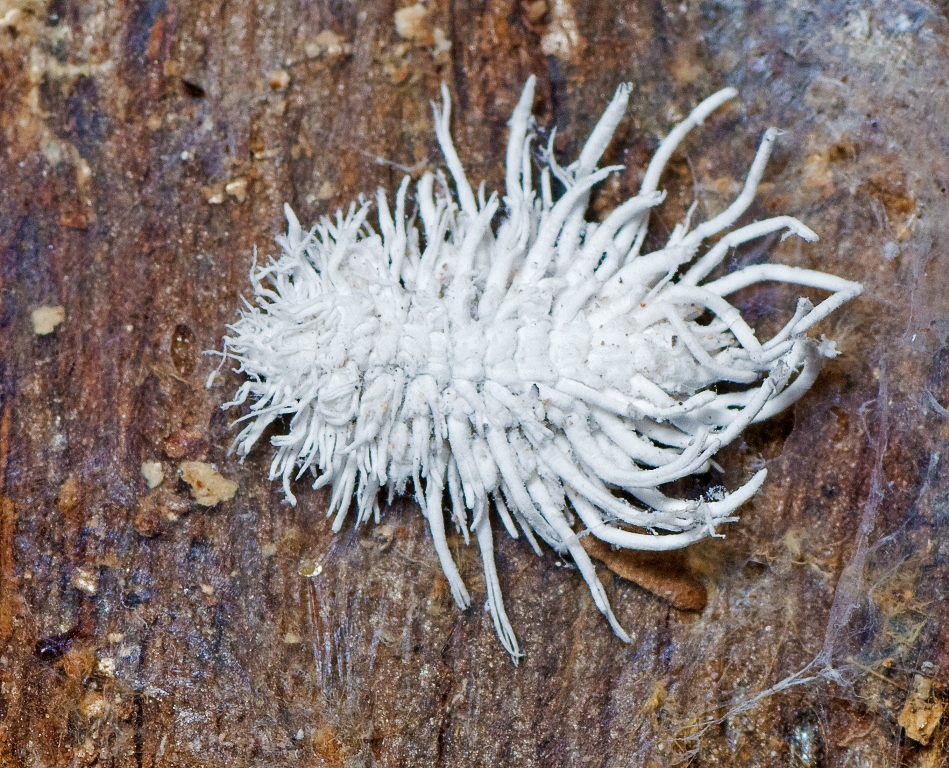 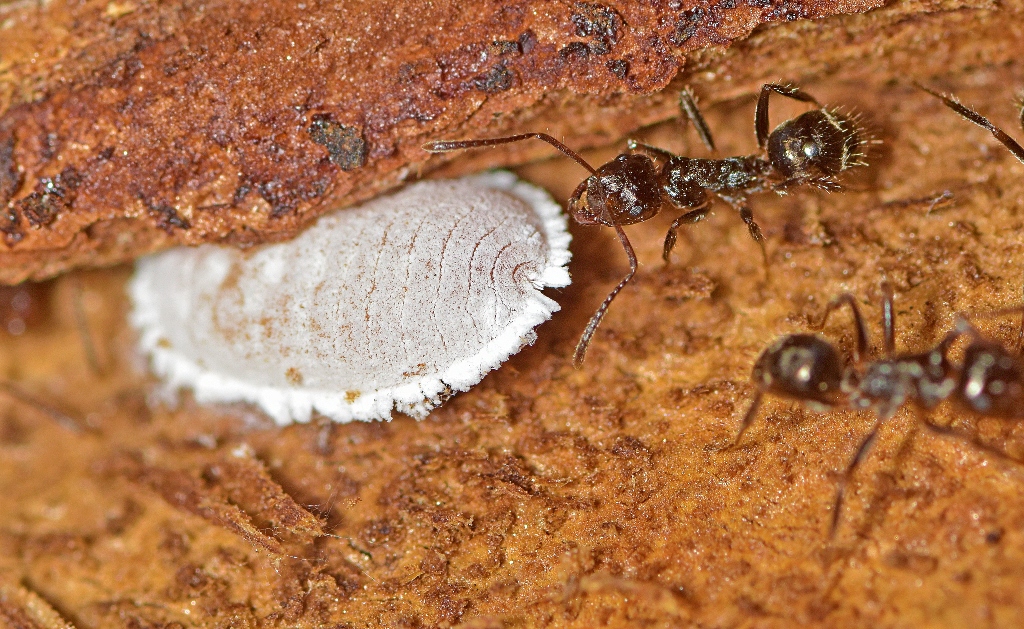