I’ll make this post short as it’s about a medical (or rather, dental) procedure.

A few days ago, an old crown on one of my lower molars popped off, and there wasn’t much tooth left (when some of it sticks to the inside of the crown, you’re screwed). The dentist was closed, but there was no pain (I later found that I’d had a root canal in the tooth), and when I called after hours my dentist told me to come in today. Of course, it was my birthday. And as I was scheduled for an hour and a half, I figured they planned to to pull the tooth. For me, that means getting an implant.

Dental implants, though pricey, are a fantastic advance in the practice. Right after they pull the tooth (which was painless for me, though time-consuming because they had to dig out the roots), they drill a titanium screw into your jaw, as well as filling the tooth hole with bone-graft material (I think they use powdered pig bone or human cadaver bone). After three months, the titanium has integrated with the bone, and they make a crown to put atop the screw. The results sort of look like this: 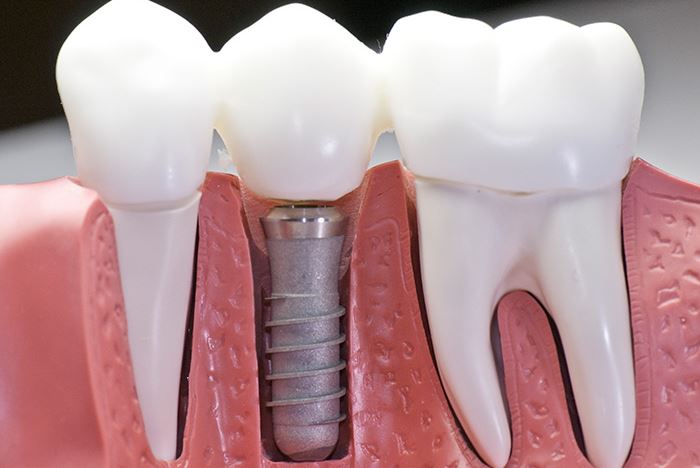 Afterwards, it looks and feels like a normal tooth, and requires just the usual care: brushing and flossing (though you dab a bit of disinfecting solution around it each night).

Because I have familial soft teeth (but great gums), this is the third implant I’ve had, and it’s not a big deal save the hit in the pocketbook, and the results are great. I’ve never had a problem with an implant.

I also quite like my dentist, whom I’ve had since I first came to Chicago. When they closed the excellent dental clinic at the U of C hospital, where he was head, he went into private practice and I followed him. Of all the dentists I’ve had in my life, he’s by far the best; a miminalist, a kind and skillful man, and very patient when there’s a difficult procedure, as there was today. (As he told me when I asked if he’d ever met a tooth he couldn’t extract, he replied, “The tooth never wins”.)

He’s also the official dentist of the Chicago Blackhawks hockey team, which means he has to be at every game (hockey players are always busting their teeth). I was told there’s a dental clinic in the United Center, where the Blackhawks play.

By the way, if you haven’t been to the dentist during the pandemic: things have changed. There is constant sanitizing, temperature-taking, and wearing of personal protective equipment. I was told that there have been no covid incidents in this dental practice, which has about four dentists and a passel of assistants and hygienists.

Anyway, I’m in no pain, but have to take antibiotics for a week and have a couple of stitches in the gum. At my age, it could be worse! But it is my birthday, which was noted by the receptionist with surprise when I made my next appointment. It’s not the best of birthdays, as I can’t eat and drink exactly what I want, but I’ve simply postponed the final day of Coynezaa until next week.

One problem with going to the dentist is that I pass about three Dunkin Donuts stores on the way (it’s downtown), and I can’t have a donut on my way there because I don’t want food in my mouth when I arrive, and afterwards I’m usually not supposed to eat for a while. Normally I’d treat myself to a donut after a medical procedure

But others don’t have to eschew the donuts. Rather, they chew them, and today I saw this classic scene on my way to the dentist.

65 thoughts on “My birthday trip to the dentist”