The other day a friend asked me if I thought that religion would show a big resurgence in America after the pandemic abates. I said that I doubted it on two grounds. First, the pandemic, in which many people died without obvious goddy reasons, should dispel any idea of a loving and powerful deity. More important, religion in America has been on the wane for decades, and I expect that the trend will continue. (If you want reasons why, read Steve Pinker’s book Enlightenment Now.)

We heard yesterday that black voters were crucial in Biden’s victory. Today we hear from Phil Zuckerman that one could make a similar case for secular voters. Zuckerman, a professor of sociology and secular studies at Pitzer College in California, is the author of a book I like a lot, Society Without God (2008, second edition 2020), showing that Denmark and Sweden function very well without religion, thank you. He also founded the first secular studies program in the U.S., allowing students to major in that field.

If you want to be heartened about the increasing influence of the nonreligious in America, read this short article published by Zuckerman in The Conversation, and, surprisingly, widely reprinted in U.S. newspapers.

The graph below shows the rise of the “nones” since 1970, with “nones” being those Americans who profess no religion in particular. You can’t really call them nonbelievers or atheists, as some of them do believe in a higher power, but they don’t belong to a regular church. Still, the group is largely secular in outlook. And they’ve increased in the last 50 year from about 5% of Americans to about 23%—a remarkable change in a largely religious country. (The graph is interactive on the Conversation site, so you can get exact figures.) The “nones” are represented by thick red line. Note that their rise has largely been at the expense of mainline Protestants, with the rest of the faiths holding steady or showing a slight decline. 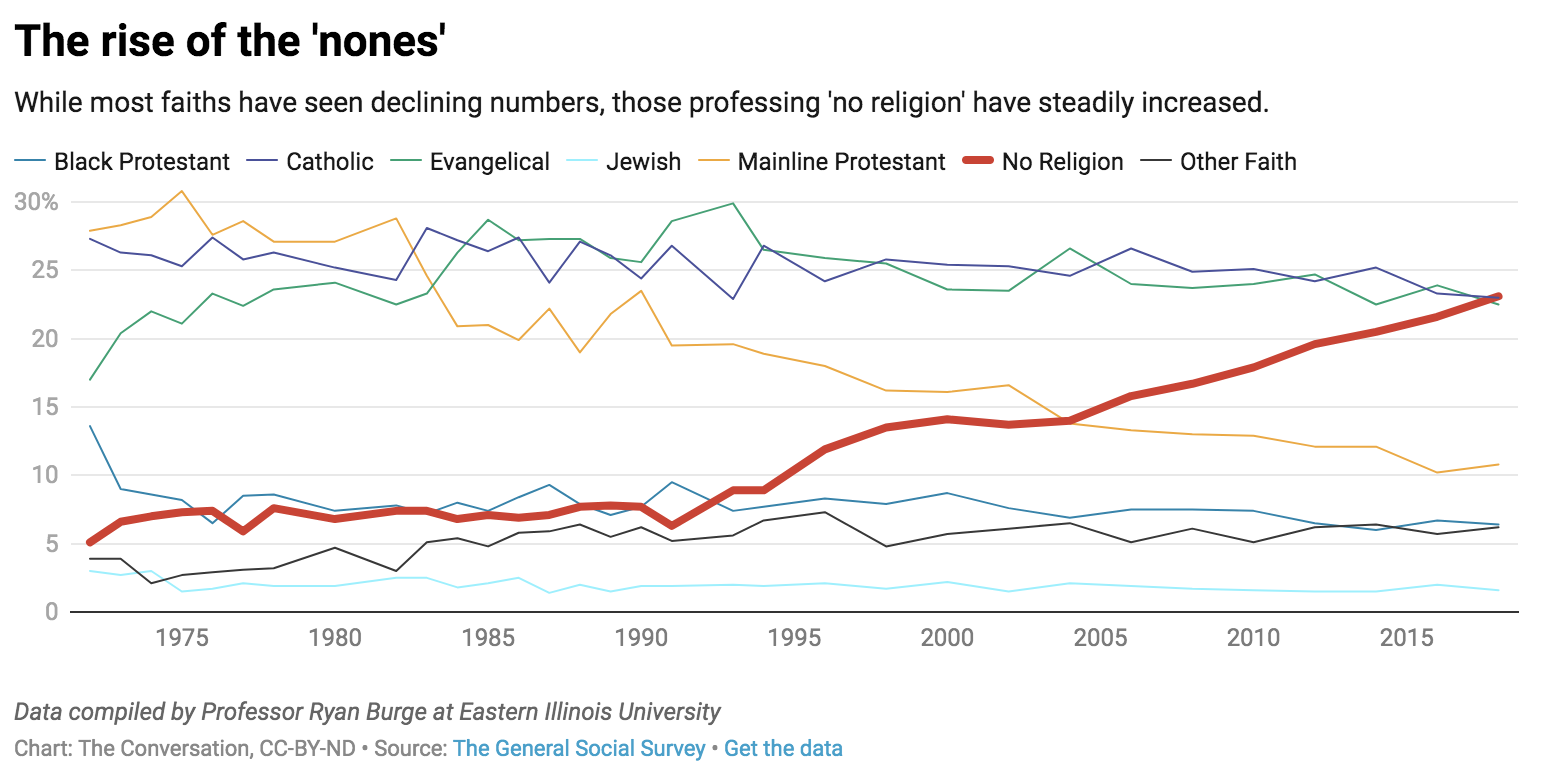 Zuckerman’s point is that although religious voters have been called “values voters”, secular voters have their own humanistic values, and, as he says, “this played out in November in a number of ballot initiatives that have flown under the national media radar.”

These include a referendum in Washington state requiring that students receive sex education in the public schools, and Washington, with over a third of its residents being “nones,” is one of the least religious states in America. It’s known as well that nones tend to favor sex education in school more than do believers.

In Oregon, voters passed a first, Measure 110, which “decriminalizes personal possession of small amounts of illegal drugs, including cocaine, heroin, Oxycodone and methamphetamine. It also reduces the penalties for possessing larger amounts.” Oregon, too, is a relatively secular state, and secularists are far more tolerant of drug use than are believers: “a 2016 study from Christian polling firm Barna found that 66% of evangelicals believe that all drugs should be illegal as did 43% of other Christians, but only 17% of Americans with no religious faith held such a view.”

“All drugs”, of course, includes marijuana.

Finally, California, a relatively secular state, passed a proposition supporting the funding of stem-cell research, an area supported far more strongly by secularists than by religionists.

Zuckerman’s view that secularism played a role in passing these referendums is, of course, speculative, but as the nation becomes less and less religious, we’ll see the effect of humanism in our laws. Phil also notes that secular Americans are significantly more likely to support same-sex marriage than are believers (especially white evangelicals). The same goes for initiatives involved in women’s reproductive rights, the DACA program, and assisted suicide, while secularists are more opposed to the death penalty than are believers. (Zuckerman gives links to all these claims.)

Two more points. The first is the argument that secular voters made a difference in the election.

According to Eastern Illinois University professor Ryan Burge’s data analysis, around 80% of atheists and agnostics and 70% of those who described their religion as “nothing in particular” voted for Biden.

This may have been decisive. As Professor Burge argues, “it’s completely fair to say that these shifts generated a two percentage-point swing for Biden nationwide. There were five states where the gap between the candidates was less than two percentage points (Georgia, Arizona, Wisconsin, Pennsylvania and North Carolina). Four of those five went for the Biden – and the nones were between 28% and 37% of the population in those key states.”

Second, Zuckerman reports an analysis of Hemant Mehta showing that every member of the Congressional Freethought Caucus was re-elected, and ten new state senators who are openly secular were voted into office, making a total of 45. Not surprisingly, they’re all Democrats!

If you want more data on the rise of the nones, click on this article from HuffPost: