It’s Sabbath for cats again: Saturday, December 5, 2020: National Comfort Food Day. What’s yours? Right now mine would be is a big juicy cheeseburger with a pile of onion rings and a chocolate shake, but I haven’t had all the constituents of that meal in several decades. Due to fear, and my increasing and repugnant view that food is medicine, my hamburger consumption alone has dropped to about 5 per year. That sucks.

Question of the Day: We all know who the first responders are, but who are the second responders? Are there third responders, too?

Yeterday a federal court has ordered the administration to reinstate the DACA program for immigrants. Good news, but Biden would have done that anyway.

The Devil Goes Down to Georgia, aiming to rally Republicans in two races that will determine that Senate’s balance of power. And, as Politico reports, even Georgia Republicans don’t know if the President-Eject’s impending visit will help or hurt the Republican Senatorial candidates. One thing is sure, though: Trump’s rallies will be crowded and maskless, a sort of Darwinian culling of conservatives. To wit: here’s a spreader-event rally on Wednesday with the state’s attorney general:

Yesterday the House of Representatives voted to decriminalize marijuana on the federal level. (Even when weed is legal under state law, it’s still a federal crime to buy or sell it; they just don’t enforce it. The bill would also expunge convictions and release offenders from prison who committed nonviolent marijuana-related offenses. The vote was 228-164, largely along party lines. Here’s the breakdown from Marijuana Business Daily; look at the cowardly Republicans who abstained! Why don’t Republicans like dope?

Don’t count on federal legalization of marijuana, though, as Mitch “666” McConnell has said that the bill is unlikely to even come to a vote in the Senate, and if it did it would still lose.

If you take your cue on pandemic behavior from what epidemiologists do, read this article (and get depressed) about how the experts are themselves behaving, and what might change were they to get vaccinated:

Only a third would return to “more” activities, even if the vaccination protects you? Herd immunity will be attained when about 70% of the population is vaccinated—and that assumes something we don’t know: that vaccinated people can’t spread the virus.

Stuff that happened on December 5 include:

We will not speak of this.

I’m a member of that branch—Alpha of Virginia. As a counterculture hippie at the time, I fastened my Phi Beta Kappa key to the zipper of my jeans, using it to unzip and zip up.

That was the amendment that repealed the 18th Amendment, which outlawed sales and manufacture of alcohol. That was a terrible idea. Here’s a brief video on the history of prohibition and its repeal:

Nobody knows what happened to those five planes. Aliens?

The deaths could in fact have been as many as 10,000. Here’s a short video about the Great Smog:

Here’s an interview with Heisenberg at Munich’s Max Planck Institute in the 1970s; he speaks in English:

Those for whom December 5 was curtains include: 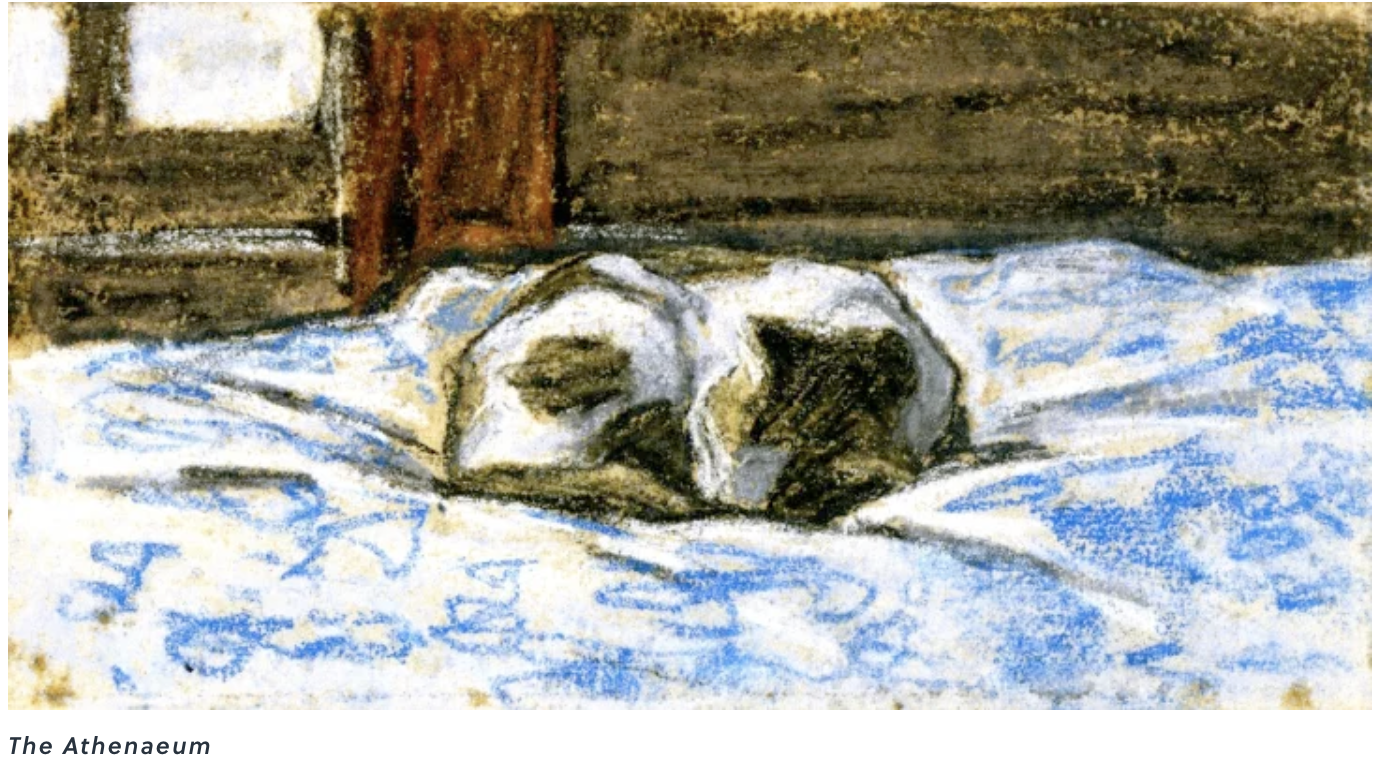 Meanwhile in Dobrzyn, Hili is being a drama queen, turning walkies into a momentous decision:

A: What are you looking at with such intensity?
Hili: I’m thinking about whether to exercise my freedom to go out or my freedom to stay at home. 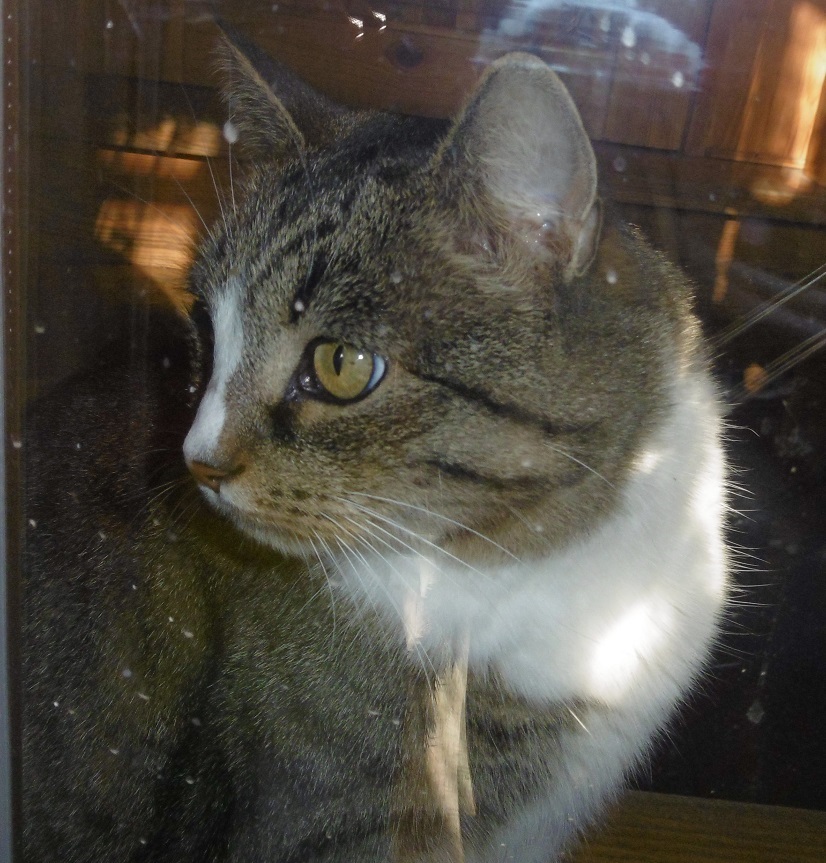 I asked Matthew, since he is going to Cambridge today (where the pubs are still open) to drink a Tim Taylor Landlord for me, as it’s my favorite session pint and I can’t get it here. He sent me this picture, clearly taken in his Manchester home, with the caption, “That’s Pepper. You can just see Ollie’s tail.” (Those are two of his three cats.) What I wouldn’t give for that bottle or, better yet, a freshly drawn pint of Landlord from a well-kept keg! Best session pint in the UK, and erstwhile winner of CAMRA’s Supreme Champion Beer of Britain in 1982, 1983, 1994, 1999, and 2014. 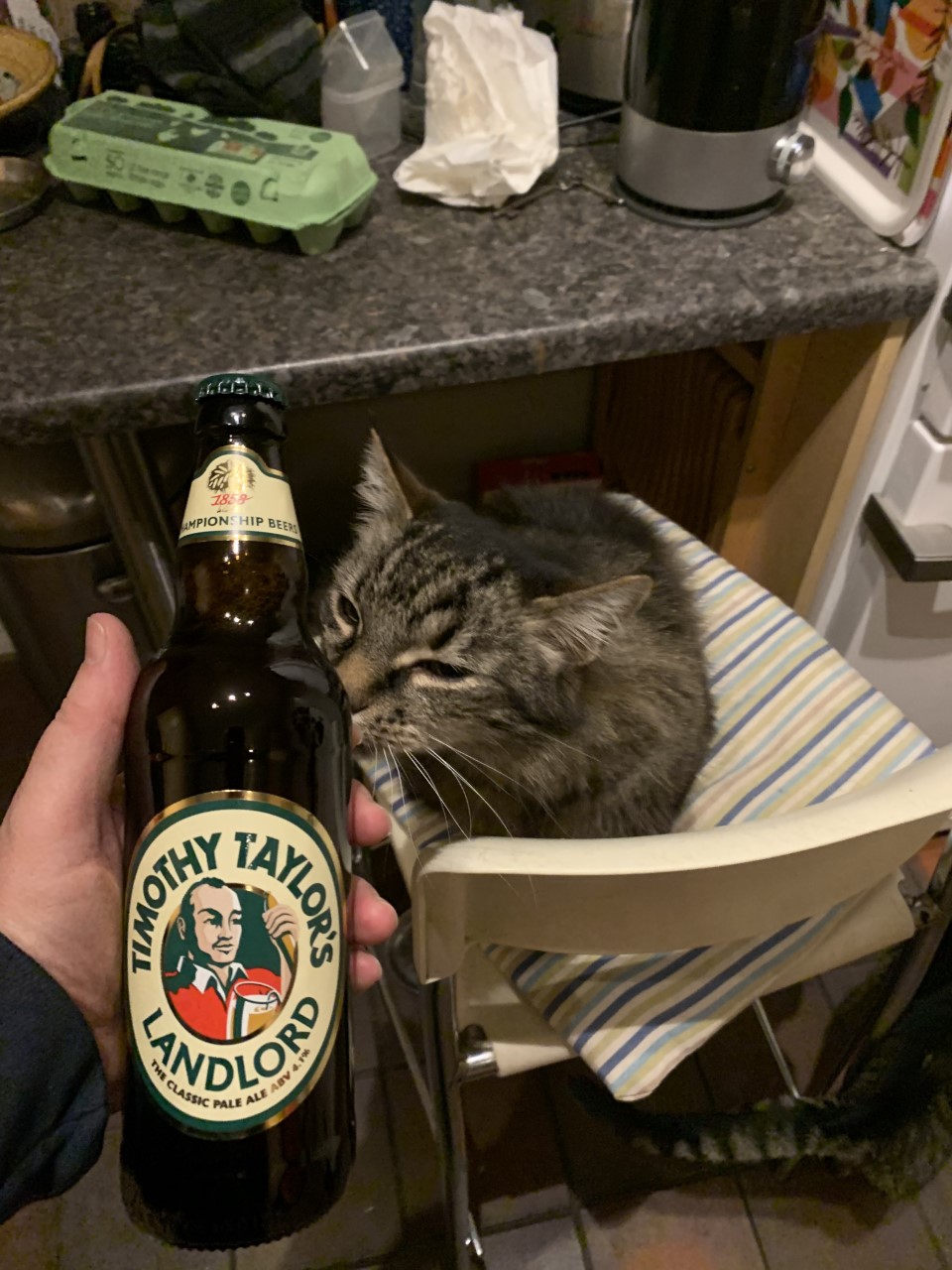 From reader Rick we get a SMBC cartoon by Zack Weinersmith. Both mom and daughter seem confused about determinism, though. . . 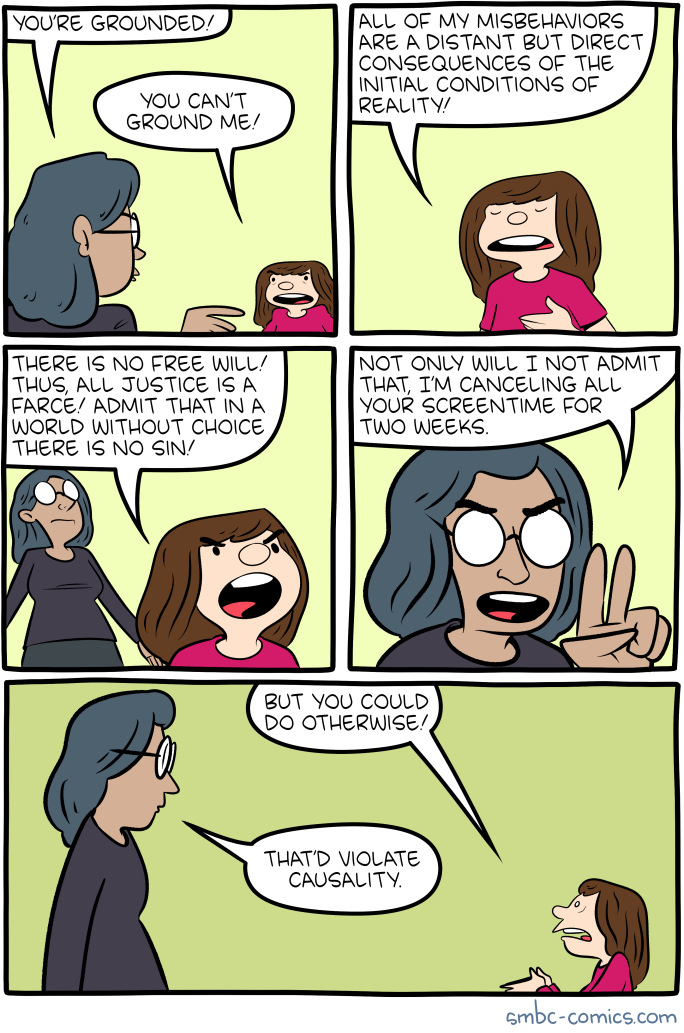 A meme from reader Jim, who says he got it from reddit: 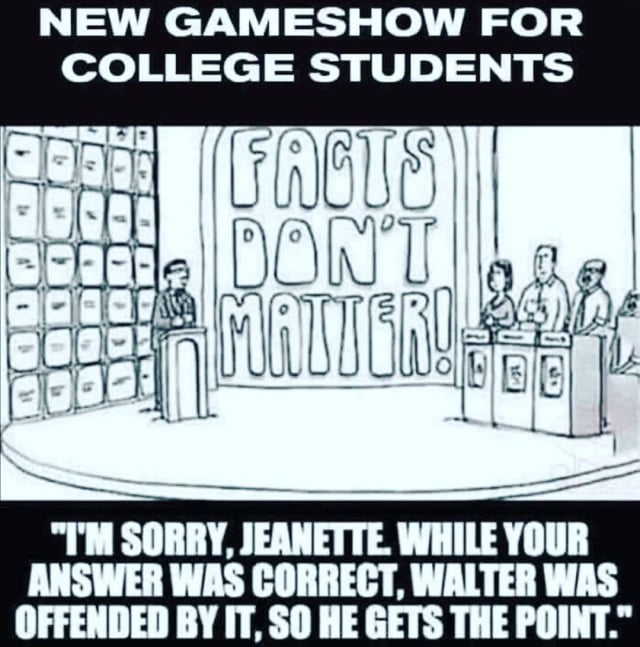 A video of a poor woman getting pranked in a word game, while everyone else gets it!

This is a chilling and ineffably sad photo but it’s real; see the story at Newsweek (h/t Jim):

These are iPad stations being prepared for virtual ICU end of life visits by a palliative care doc I know. Jesus. pic.twitter.com/lIgbg0FhaL

From reader Barry, who found a whole Twitter thread of “Places where cats shouldn’t be”. Go look at more:

I got so excited when Matthew sent me this tweet that I added a few words and instantly retweeted it. I love Wisdom and she persists!

Wisdom's back! This Senior Bird has produced at least 36 eggs and flown over 3 million miles: 120 times the Earth's circumference. I wish that somehow she'd be given a comfortable and pampered retirement, but she's doing what albatrosses evolved to do. https://t.co/kpnhcjU0lf

The Bay Cat (Catopuma badia), endemic to Borneo, has ears so small it barely looks like a cat. It even looks a bit d*g-like!

Here’s another picture of this strange felid (from Wikipedia): 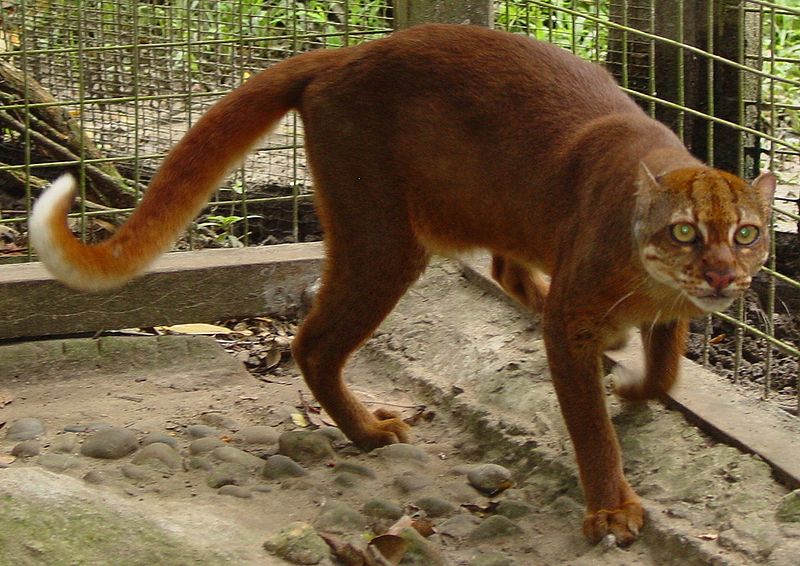 These are very beautiful ducks:

I could just plop myself in the sand and watch them surf the waves for hours…
LONG-TAILED DUCKS
Jones Beach State Park pic.twitter.com/wNpdqg5Bvr

Here’s a video of males and females in Ontario, feeding on zebra mussels (they’re diving ducks). The species was a Sunday Duck o’ the Week from John Avise, and you can see his pictures and notes here.