Things have been pretty quiet at Botany Pond lately, and, as temperatures dropped below freezing, parts of the pond have been covered with thin ice. That hasn’t stopped some ducks from coming by, though. For more than a week we’ve been graced with four ducks, though “graced” might not be the right word for a bonded drake and hen who are Evil Ducks.

First, though, the nice ducks, a heavily bonded pair of hens named Cate and Tilda (after the actresses) who were here until yesterday. They were never more than a few feet apart, and swam together constantly. They look like first-year hens, and might be siblings from one small brood.  They seem to really like each other, and when the Evil Ducks (below) drive them apart in the pond, they quack until they find each other again.

I love this pair, and until this morning fed them twice a day. I’ve now stopped the feeding as it will get cold and I don’t want them around when the pond freezes over completely. 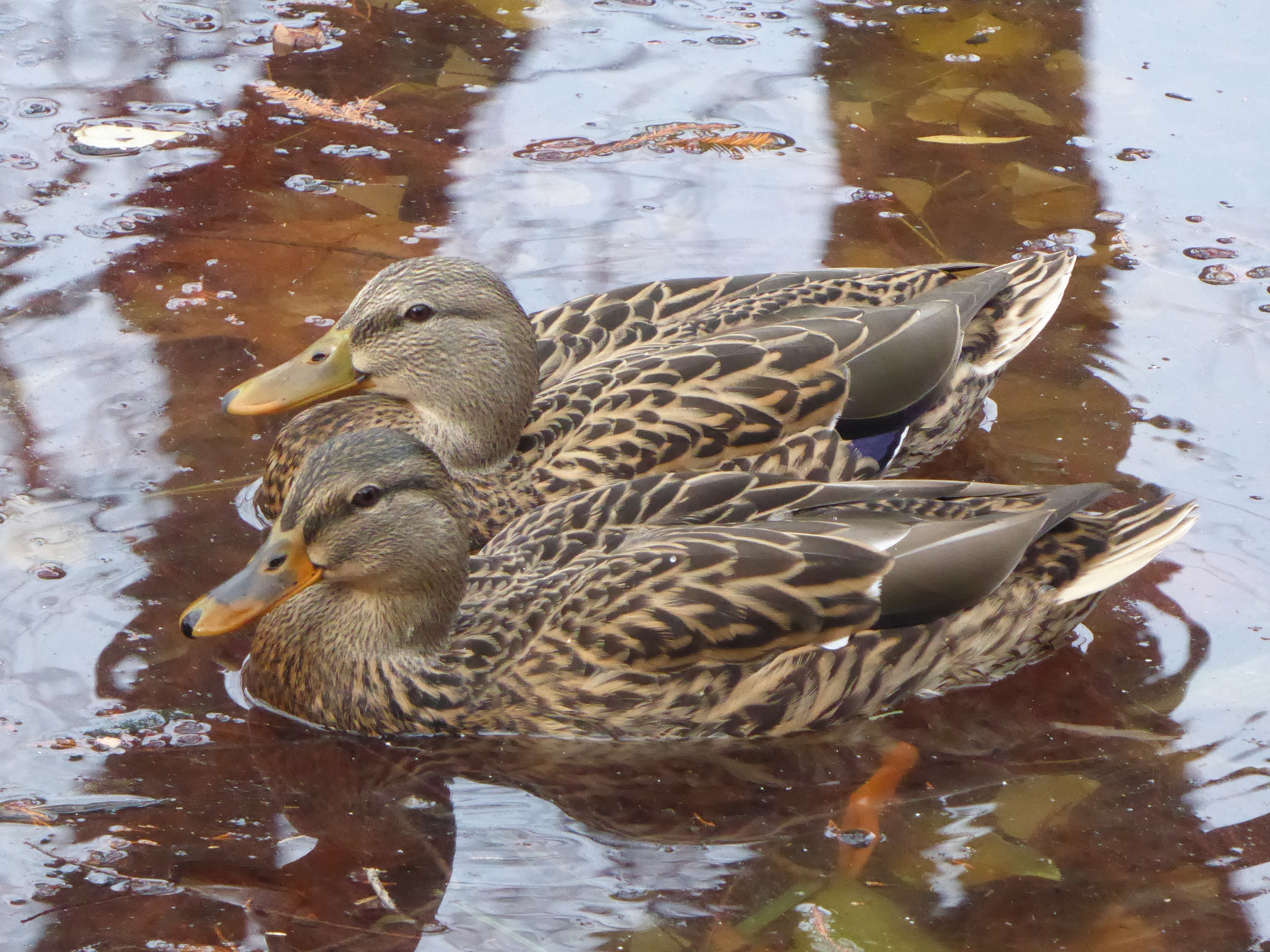 They would sleep on the water, too, which to us would be ungodly cold. To them it’s not bad. Here’s one taking a snooze on the float: 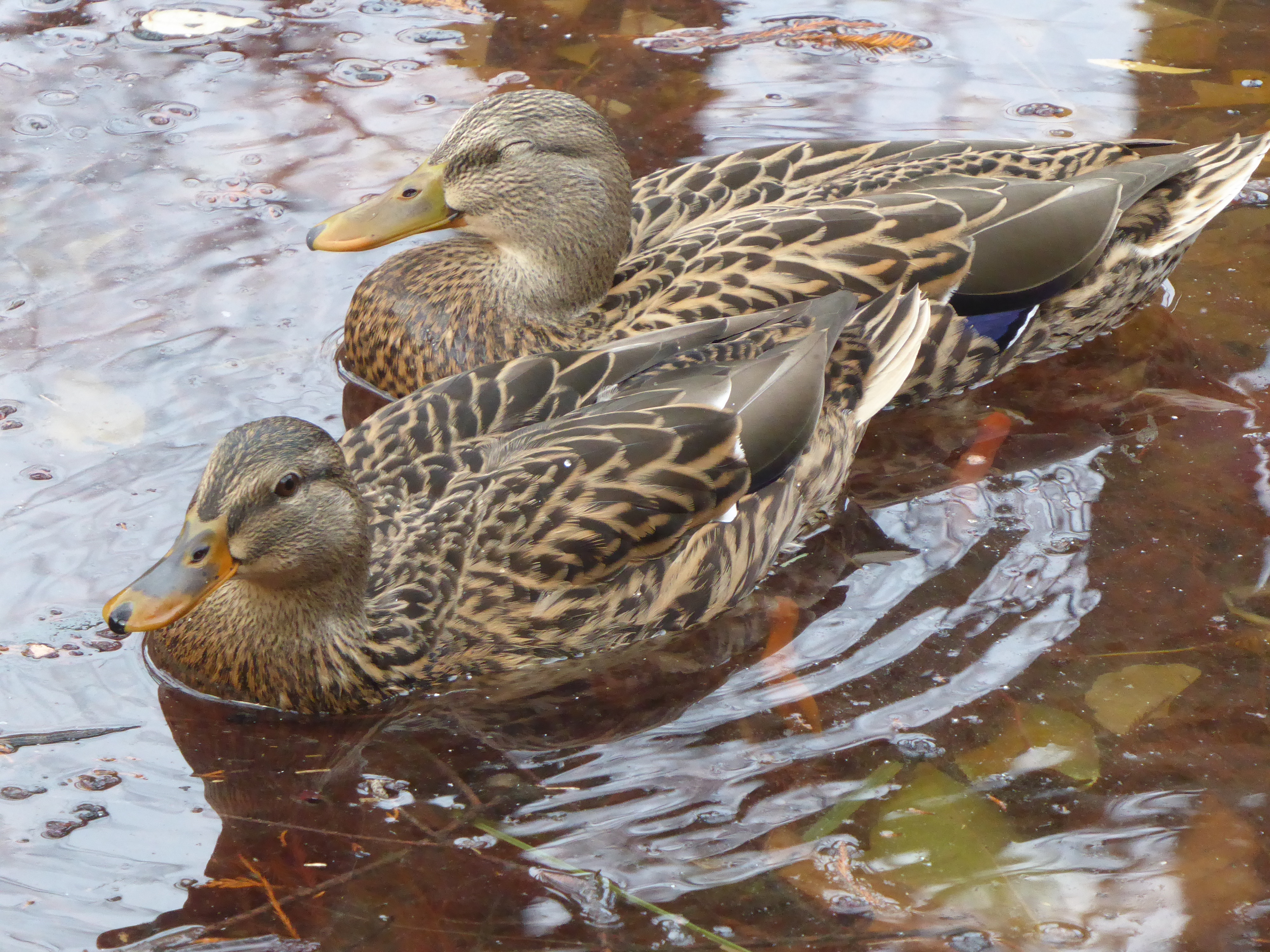 Sadly, two days ago Cate flew away, leaving Tilda alone with the Evil Ducks. I wonder if Tilda misses her. 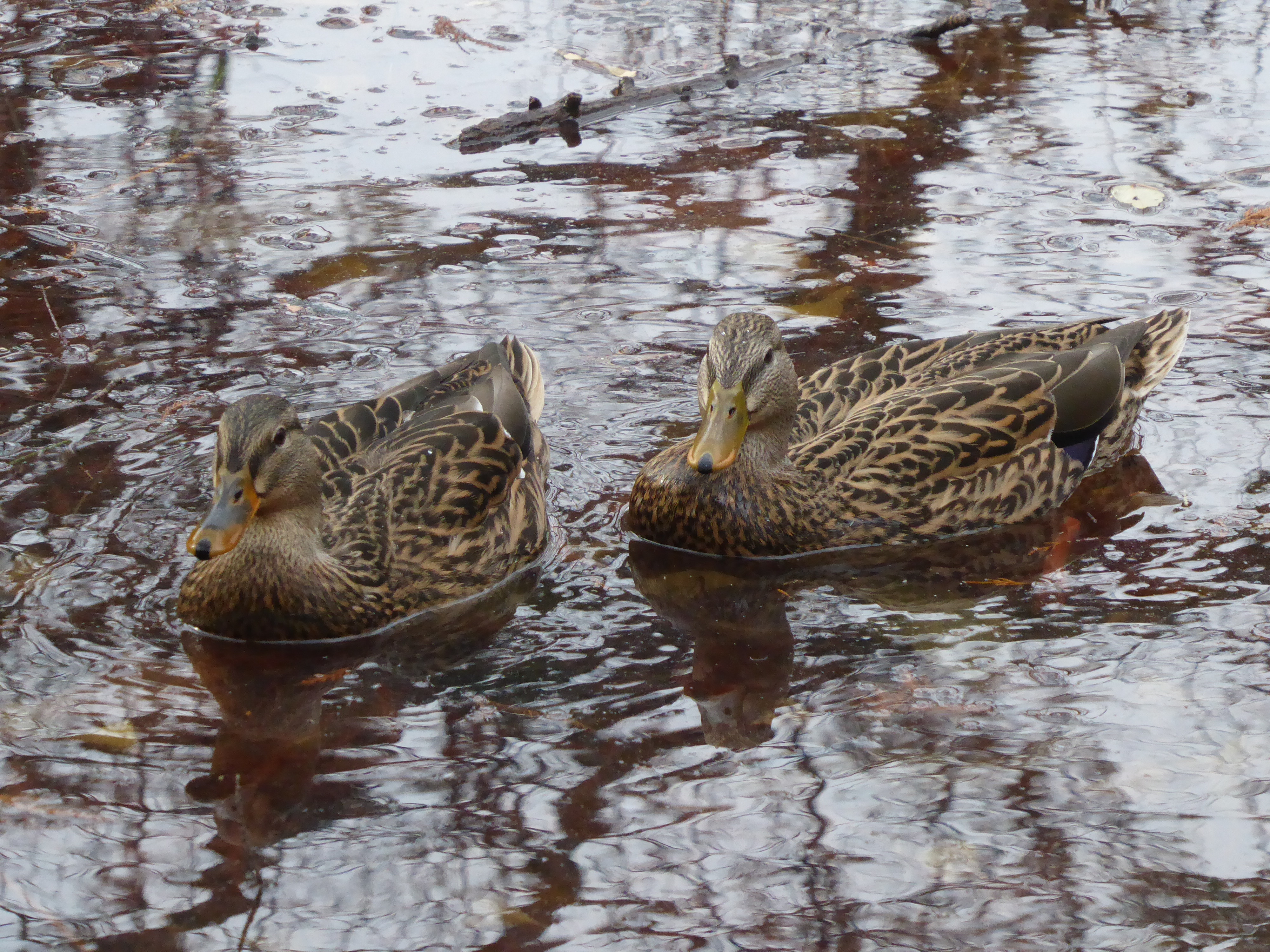 And the Evil Ducks. The Drake is Eskimo Pie, named because he liked the cold water. A few days after he showed up—about ten days ago—he was joined by a female, and they’re clearly a bonded pair now.  We first called her “Mrs. Pie” because we hadn’t thought of a name, but now she’s named Pumpkin. Eskimo and Pumpkin: the Pie Family. 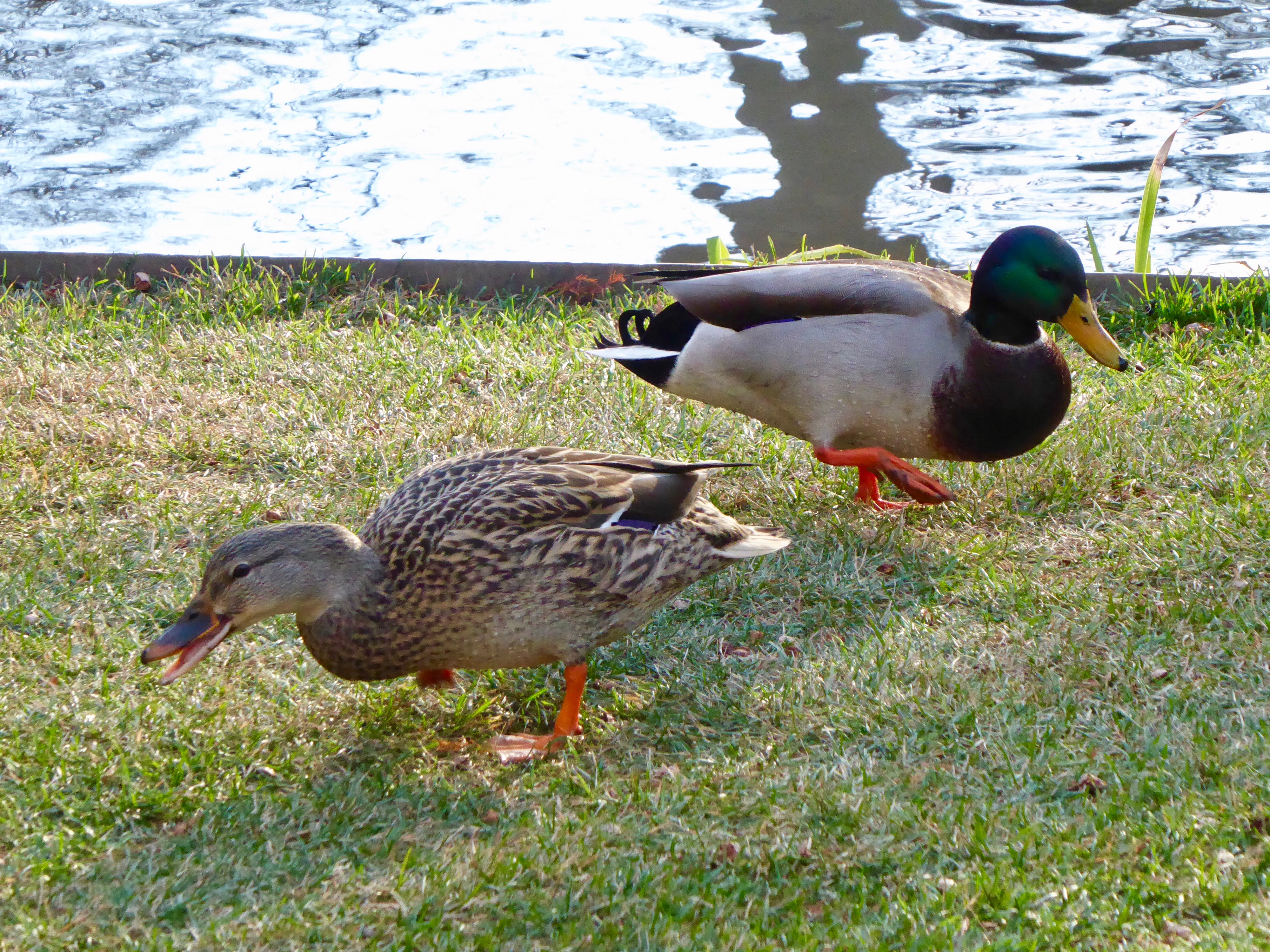 The Pies are evil because they’re always chasing the other ducks: Tilda and Cate until two days ago, and now Tilda as the sole hen. They make her life miserable, never leaving her alone when they can see her. When I fed the bonded hens, I’d get them into the channel and toss them food, all the while driving off the Pies, who were incessantly trying to get over to the food. It was rough—part of this stressful duck year. Here’s Pumpkin trying to cross the sidewalk to get to Tilda’s food. She is deceptively sweet looking, but she’s a demon. 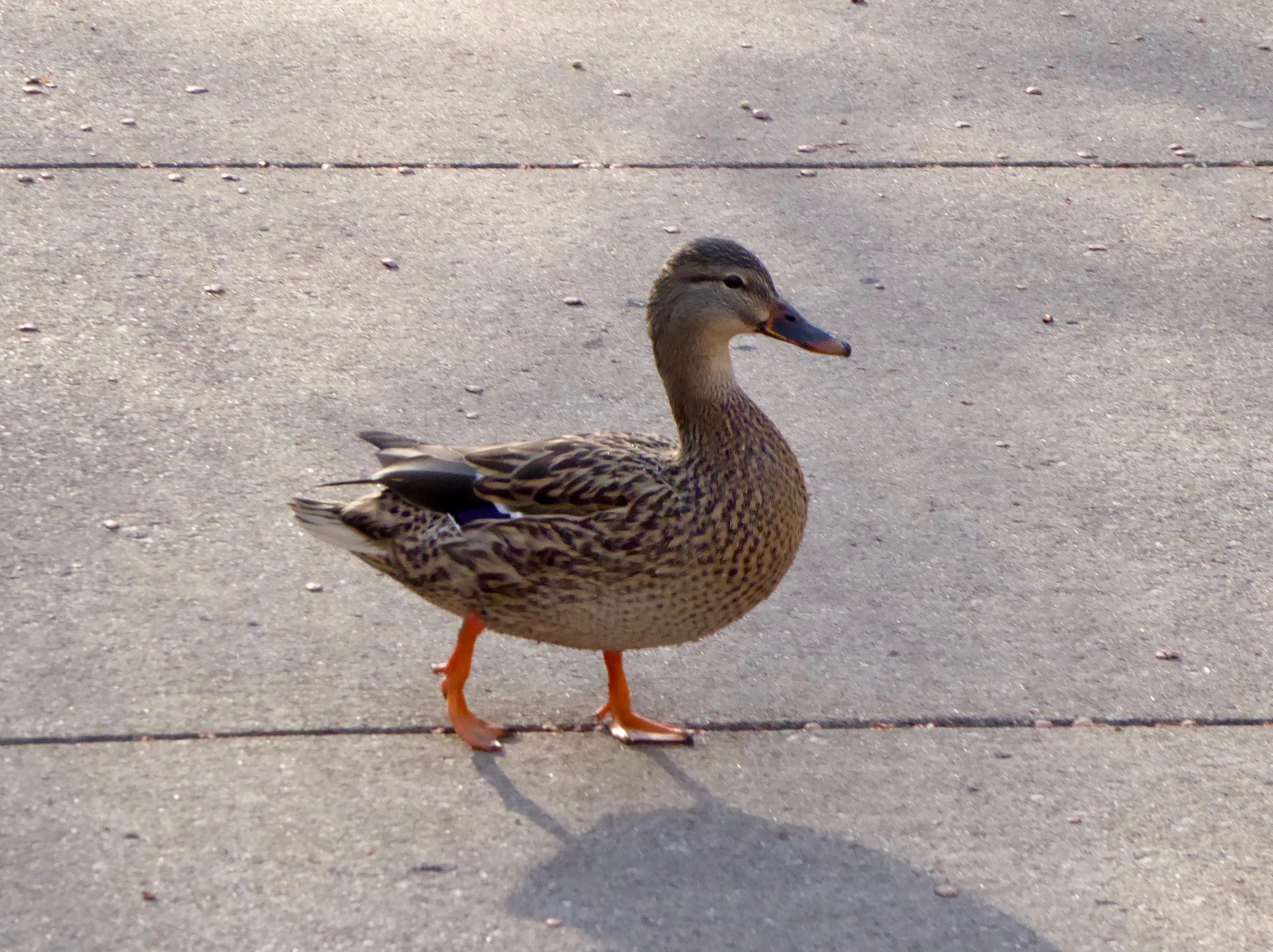 Lagniappe: On December 1, and on several days since then, starlings have been swirling around my office window. In fact, they are to be seen all around the university, engaged in murmurations that, because they’re not in the evening, seem to have little to do with roosting for the night. Here are the shapes I see flitting by my window, back and forth, as I work. Who knows what’s going on with these birds?

6 thoughts on “Friday ducks (and starlings)”