Lately we’ve been talking about several issues related to transsexual people, in particular the senses in which they can or should be distinguished from people of their biological sex, including their participation in sports; possible effects (or lack thereof) of hormone treatment; and recent books that call for caution in supporting and medically treating gender-dysphoric teenagers who may later regret actions taken when they weren’t capable of informed consent. While I think the discussion has been rational and certainly not “transphobic”, I’ve nevertheless been the recipient of a spate of emails, often nasty ones, excoriating me for promoting an “anti-trans” agenda. I’ve resisted the temptation to respond with recommendations for self-copulation.

The last issue, treatment of young children (mostly girls), is the subject of today’s post. It turns out that yesterday Britain’s High Court ruled that children under 16—and perhaps those between 16 and 18—might have to have a court ruling before they’re allowed to take “puberty blockers”, a somewhat reversible treatment that stops puberty in its tracks. Taking these blockers is usually the first step in further transitioning involving irreversible treatments like cross-sex hormone treatment or surgery. The court ruled that under-16s are largely incapable of giving “informed consent.” You can read about this case in the three article below from the BBC, The Guardian, and The Times of London (click on screenshots to access articles). 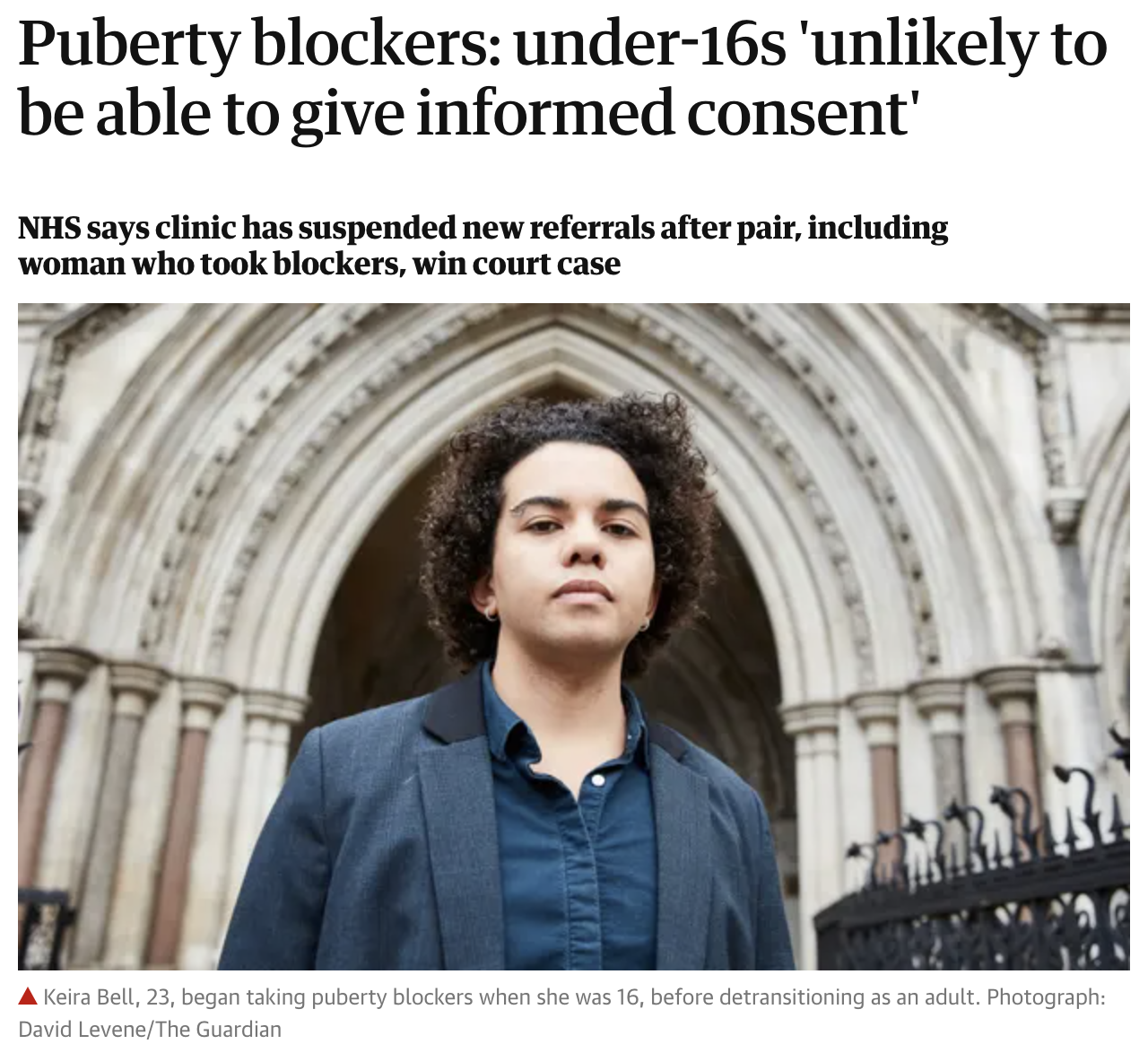 From the Times (paywalled): 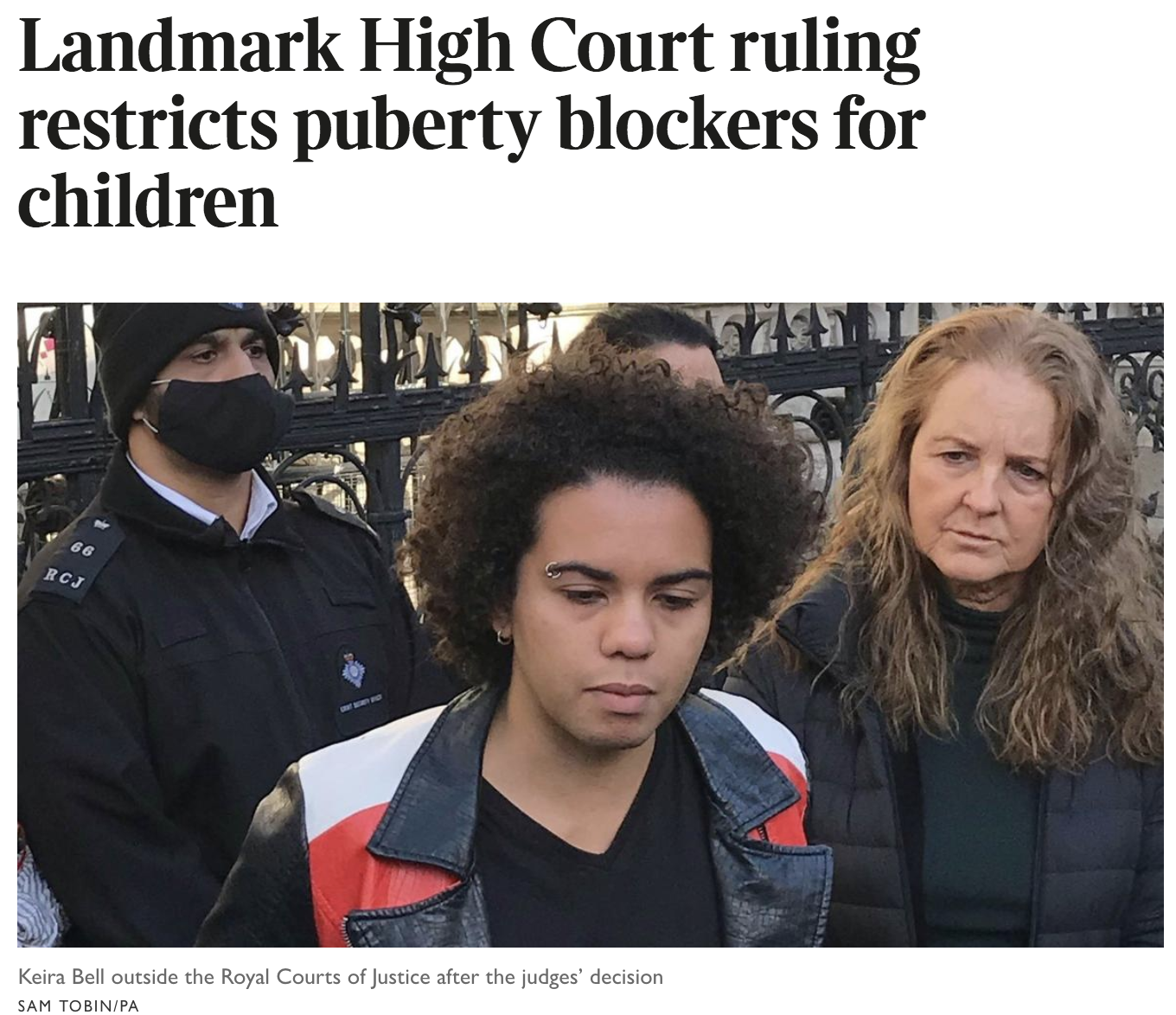 The High Court decision came in a case brought by two people against the Tavistock and Portman National Heath Service Trust, the clinic in England that counsels and treats those who consider themselves transsexual. One of the cases was brought by Keira Bell, 23, shown in the pictures above. She was treated with puberty blockers at Tavistock after she was referred there at 16, and regrets it. (I’m not implying that most teenagers later regret such treatment, as I have no data on that, but I suspect most of them have no regrets. Nevertheless, if an appreciable number do, that’s a reason for caution.)

The other person bringing the case was “Mrs. A”, the mother of a 15-year-old autistic girl who is awaiting treatment at Tavistock “Mrs. A.” is worried that her daughter will “get it wrong” before she can make a mature decision.

There are a fair number of young girls who have sought and received treatment at Tavistock: the paper reports that, in the last year, 161 children were referred to the Gender Identity Development Services (GIDS), and of these three were 10 or 11 years old and 95—nearly 60%—were under 16. The Times notes that those seeking treatment involve “a disproportionate amount of girls and young women.”  These numbers have been growing rapidly, from 97 children and young people referred to the clinic compared to 2,591 in 2018. Here’s a plot I showed recently:

Here’s a plot from a paper in the Archives of Sexual Behavior showing the number of people referred each year to the UK’s Gender Identity Development Service. It shows the strong rise in referrals of adolescent females compared to males, and some rise in children as well. In the last 7 years it seems to have gone from fewer then 40 to over 1700 in adolescent females—a roughly 43-fold increase! 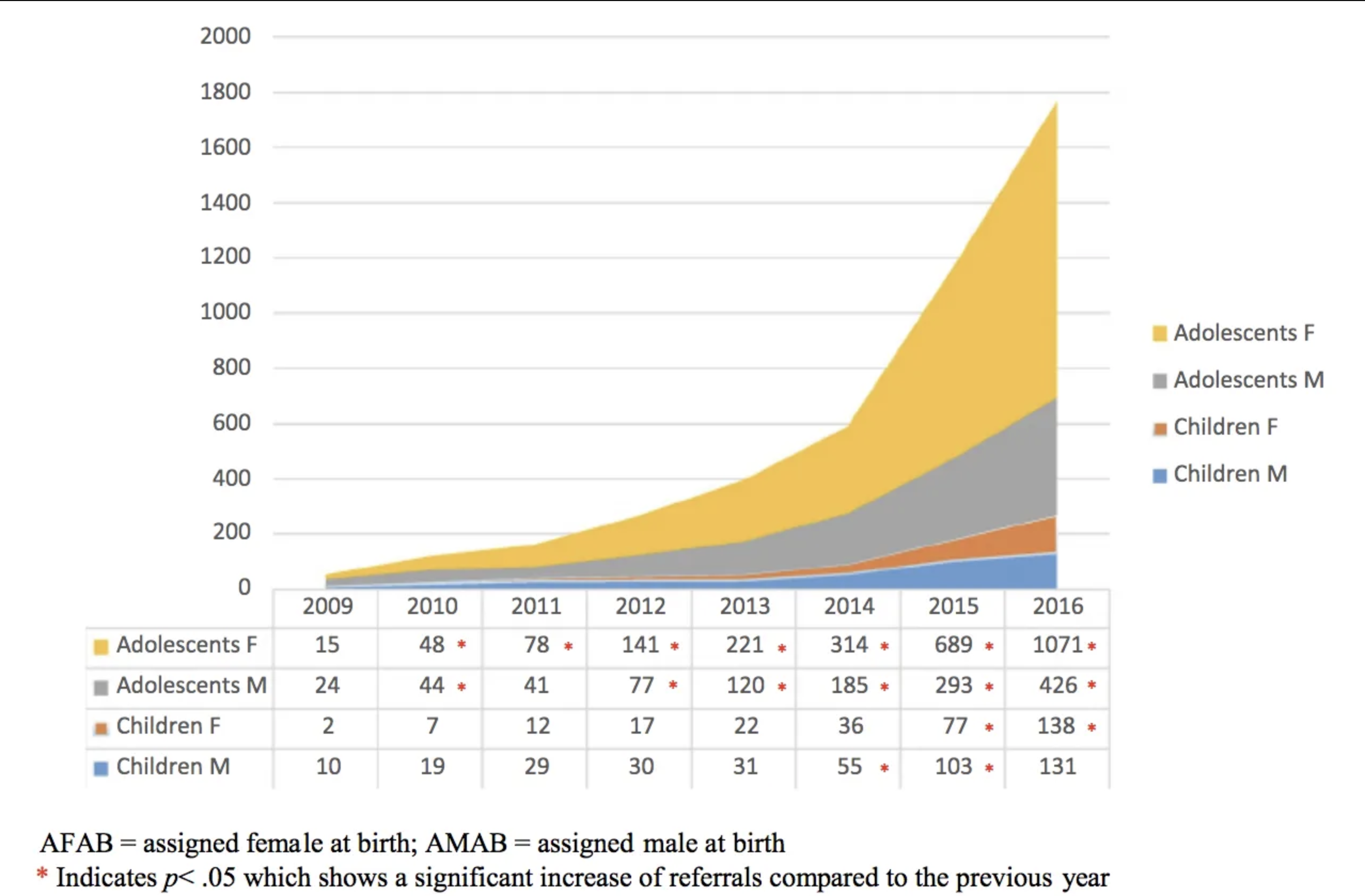 We don’t know the reason for this rapid increase: among suggested causes are a freer climate that allows children to express their gender identities, or a faddishness that turns troubled or confused children to a form of treatment that is heavily supported and often makes them into a type of hero.

Regardless, here’s the papers’ summary of the High Court ruling (you can read the full ruling here); this is from The Guardian:

In their decision, Dame Victoria Sharp, president of the Queen’s bench division, Lord Justice Lewis and Mrs Justice Lieven, said a child under the age of 16 may only consent to the use of medication intended to suppress puberty “where he or she is competent to understand the nature of the treatment”.

Such an understanding must include “the immediate and long-term consequences of the treatment, the limited evidence available as to its efficacy or purpose, the fact that the vast majority of patients proceed to the use of cross-sex hormones, and its potential life-changing consequences for a child”.

The judges said there would be enormous difficulties for young children weighing up this information and deciding whether to consent to the use of puberty blocking medication.

For treatment of those over 16 it is normally presumed that they have the ability to give consent. But in gender reassignment cases where puberty blockers may lead to subsequent surgical operations, the judges said: “Given the long-term consequences of the clinical interventions at issue in this case, and given that the treatment is as yet innovative and experimental, we recognise that clinicians may well regard these as cases where the authorisation of the court should be sought prior to commencing the clinical treatment.”

The NHS, which is appealing the judgement, has immediately stopped the inception of puberty-blocking as well as cross-sex hormone treatment, and issued some statements. From the BBC:

An NHS spokesperson said: “We welcome the clarity which the court’s decision brings. The Tavistock have immediately suspended new referrals for puberty blockers and cross-sex hormones for the under-16s, which in future will only be permitted where a court specifically authorises it.”

In September, the NHS announced an independent review into gender identity services for children and young people.

The Tavistock and Portman NHS Trust said it was “disappointed by today’s judgment and we understand that the outcome is likely to cause anxiety for patients and their families”.

It added: “Our first duty is to our patients, particularly those currently receiving hormone blocking treatment, and we are working with our partners, University College London Hospitals NHS Foundation Trust and Leeds Teaching Hospitals NHS Trust, to provide support for patients concerned about the impact on their care.”

In contrast, groups like the “trans children’s charity Mermaids” decried the decision:

Lui Asquith, from trans children’s charity Mermaids, said the ruling was a “devastating blow” and “a potential catastrophe for trans young people across the country”.

The charity said: “We believe very strongly that every young person has the right to make their own decisions about their body and that should not differ because somebody is trans.”

You can see more about Mermaids’ reaction here. But their last statement skirts the question that the Court was asked to decide: How old must you be before you are capable of making a medical decision that may be irreversible?  And it’s not just trans people to whom this applies: what if a 13-year-old boy wanted his penis removed because he didn’t like it? Should he be able to make “his own decision about his body”?

I think that reasonable people should agree that there is an age below which a child isn’t deemed capable of making a medical decision like this one, even if they feel strongly that they are transsexual.  Surely 6 is too young and 20 sufficiently old to make a “mature” judgement. But it’s also clear that children differ in the level of “maturity”, so there might be some flexibility (though there isn’t in things like drinking ages). The court, in ruling that 16 is a cut-off point, was surely being subjective, and they realized it, for they affirmed that even older teenagers might require a court judgment to begin puberty blockers. For those younger than 16, it seems reasonable to me to wait until they turn 16 until they can give “informed consent,” or be able to bring their case to legal judgement.

Those who think that 10-year-olds should be able to make their own decisions, and take puberty blockers or cross-sex hormone treatment at will (counseling is surely required), seem to me unreasonable. After all, courts have set age limits for other decisions that require “informed consent”, like age limits for statutory rape (in Illinois, 17 is the legal age of consent for sexual acts. If you’re 16, are you too young to consent to sex but old enough to have your sex transformed to another?) It’s a sign of the valorization of all desires to be transsexual that a charity like Mermaids wants anyone, no matter how old, to have their own decisions not just respected, but acted upon.