Reader Steve called my attention to an article I wouldn’t have otherwise seen, as it appeared at The Daily Maverick, a South African news website. It’s about the recurrent and polarizing problem of what to do about transgender women, born as biological men, who want to compete in women’s sports. The piece seems quite fair to me, certainly not demonizing transsexuals, but also calling attention to the conflicting issues of fairness in sports towards transsexual women on one hand and towards biological women who haven’t undergone medical transition on the other. 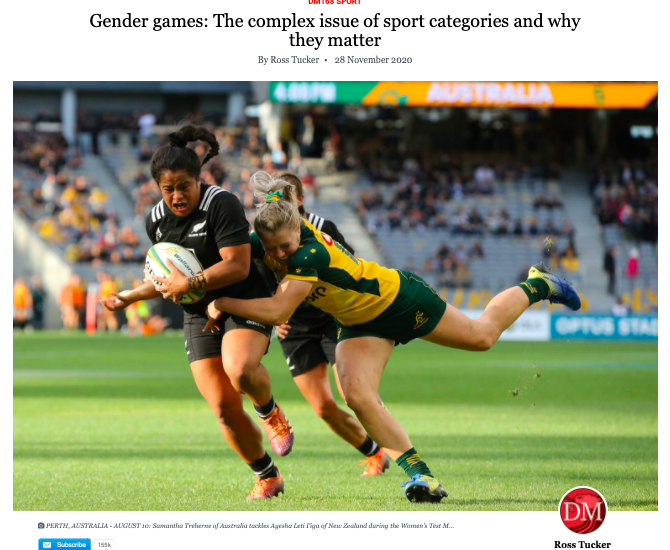 I’ve written a lot about this issue before. I’ve arrived at only one firm conclusion, and that’s that biological men who declare that they’re women, but haven’t undergone any hormonal or medical treatment, should not be allowed to compete in women’s sports. Given the average sex differences in bone and muscle mass, and in strength and speed, this simply wouldn’t be fair to the competing women. But several places, including the state of Connecticut, do allow that, so that unaltered biological men who identify as women are allowed to compete in women’s sports. The results are predictable—the women-identifying men clean up the prizes. I doubt that there are many people who think this is fair, though the ACLU has defended those men when women’s athletes brought a lawsuit.

For intersex people, or for those who have undergone surgery and/or hormone treatment, the issue is much stickier.  For one thing, even with those treatments you don’t lose all of the differential muscle mass that a male gains at puberty. Further, the testosterone titers of a transsexual woman below which she is allowed to compete, as in the Olympics, are purely guesswork, with no research behind them affirming that such titers completely remove the physiological differences that result in different sports performances of men and women.

What is new about this article, which is largely about rugby, is its claim that there is research on the effects of hormones and surgery, but that it doesn’t show what the advocates want. Rather, it shows that the male/female differences are not effaced by hormones. (World Rugby has banned all transsexual women from competing in women’s rugby, with their rationale being safety, since, as they claim, one can hurt someone quite badly with a more robust physique.)

The article first highlights the differences that justify keeping men’s and women’s sports as separate categories:

Simply, [World Rugby’s policy’ argues that a women’s category “protects” the integrity of the result for biological females and in some instances, the safety of its participants. Biological females do not possess the same physical attributes as males and many of these male-bodied attributes have profound implications for sports performance.

In the comparison group that matters, there is literally no contest. Take for instance the fact that the best women runners in history are outperformed every year by hundreds of boys younger than 18, and by many thousands of adult men.

The gap between the respective champions in most track and field disciplines is 10% to 12%, and thousands of biological males fit into that space. As a result, if women’s sport did not exist as a category, women would vanish entirely from elite track and field.

Consider next that a 10% to 12% difference is actually relatively small. In weightlifting, the difference is 30% to 40%. For tasks like serving in tennis, it is 20% and for punching power, the male advantage has been measured at 160%.

These differences are enormous and within a relevant comparison group (like Olympic athletes, or high school athletes competing for scholarships), they are insurmountable.

This is not to say that female athletes do not possess extraordinary abilities, as well as technical and mental skills that are necessary in champions. But male-bodied physiological advantages are so large that all attributes unrelated to biological sex, the ones that should actually matter, are drowned out by things like muscle mass, strength, power, body shape and speed.

This creates the moral dilemma of conflicting fairness:

Now, with all those principles and concepts in mind, consider the dilemma for sport. There are individuals whose biological sex does not match their gender identity. Biological males undergo puberty driven by testosterone, but identify as female. What is their place in sport?

A decent and progressive society accepts them. But can sport accept them into the protected, closed category for women? Given the biological realities, if self-identification or gender identity were the sole criteria, women’s sport would become “open”, and its purpose negated.

This then sets up what is basically a “colliding rights” issue, where the rights of females to have a sporting space of their own collides with the rights of other individuals to identify as they wish. Sport finds itself in the middle of that collision. It becomes, effectively, a question of how various priorities are balanced. Those priorities are inclusion, fairness and, in some sports, safety.

Historically, the approach to this issue has been relatively simple – it tried to “fix” the problem by relying on medication or surgical intervention to lower the testosterone levels in trans women.

Given what we described above regarding testosterone’s crucial role in creating the male-female sporting divide, the premise is that if testosterone is lowered or removed, so is the sporting advantage.

The lowering of testosterone can be achieved either through surgical removal of the testes that produce it, or, as per the most recent Olympic transgender policy, medication that lowers the testosterone below a target level for a period of 12 months.

But this approach is controversial for obvious reasons. Compelling an otherwise healthy individual to use drugs as a requirement to participate, which may have serious side effects, is straddling an uncomfortable ethical line.

Even if the athlete accepts this approach, the acid test, then, is whether the outcome is true. Does the suppression of testosterone take away those differences that women’s sport excludes?

It then summarizes the scientific data, of which I was unaware. It appears that these data apply to body differences related to rugby success, but they must also relate to many sports:

The sport then has to make a choice and prioritise them. It can choose inclusion at the expense of fairness and safety, or it can choose safety and fairness, with a resultant compromise on inclusion.

That is the situation World Rugby found itself in during an expert consultation process early in 2020. The scientific evidence, while limited, is consistent and relatively clear. There are no studies that have shown that suppressing testosterone for 12 months makes a meaningful dent in male physiological advantages relevant to rugby.

All the studies that do exist strongly suggest a retained advantage that makes the testosterone suppression policy ineffective at achieving its objective of fairness.

A dozen such studies have found that strength, muscle mass, and muscle volume decrease by between 5% and 10% when testosterone is lowered. Given that the original male vs female difference is between 30% and 50%, the implication is that a significant part of the original advantage remains when trans women are compared to a matched group of biological females.

There is one study suggesting that male endurance advantages in distance runners are removed entirely, which might allow some sports to balance inclusion and fairness, but for sports where mass, size, strength, power and speed matter, the evidence all points one way, in the direction of retained advantage and the necessity of a prioritisation of those imperatives.

Now I wish I had a list of such studies, as it’s usually claimed that we know very little about the effects of hormone treatment on sports performance. (To be sure, this is based on physiological effects supposedly related to success, not what we really want to know—the effects of treatment on sports performance itself.) Apparently, though, we do know some things. The lack of endurance in distance running is interesting, but again, I’d like to see the data. If there’s no effect of testosterone treatment on performance, one might, say, combine men’s and women’s marathons, though the world’s record times for that distance are still about 15 minutes lower for men than for women.

The only solution, if you wish transsexual women to compete in women’s sports, is first to only consider people who have been treated to reduce testosterone, and THEN you must find out what reduction of testosterone can equalize the average performance of transsexual women and of biological women. Doing that experiment seems nearly impossible since it involves measuring not physiology, but actual performance, and correlating that with testosterone level. It may be that no reduction after puberty can equalize performance, and in that case we must do what World Rugby did.

Finally, there’s the option of creating a third category of competition for transsexual men and sex-intermediate people. I can see many people would object to that, too.

85 thoughts on “Once again: transgender women in women’s sports”