Robert Lang, reader, physicist, and world-class origami artist, is also a photographer of his local wildlife (he lives in California).  Today we get some photos taken from his place, which encompasses Marx Brothers Meadow (see below). Robert’s text is indented, and click on the pictures to enlarge. (I’m working on getting larger pics embedded.)

It’s acorn season in Marx Brothers Meadow (*), and the California Mule Deer (Odocoileus hemionus californicus) come hang out for hours at a time munching and sleeping, right outside the window over my desk. They have grown accustomed to my presence, though, and pretty much ignore me when the noms beckon. (In fact, there are three out there as I write this.) One of the things I hadn’t noticed before was how shaggy their winter coat is, as you can see here. 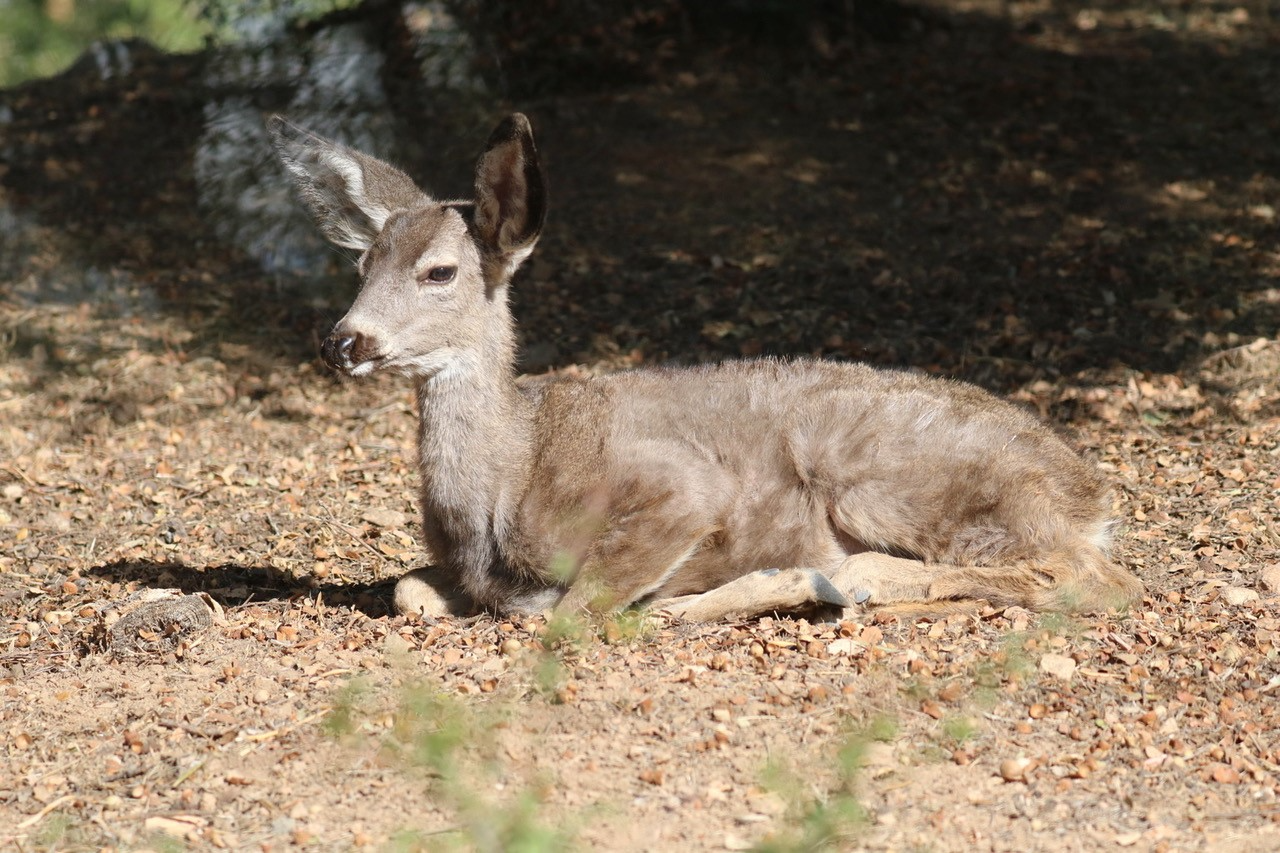 But the main purpose of today’s collection is birds, which also regularly visit, especially this time of year. I keep my camera at hand, and most of these were shot through the window from my work desk.

First, we have the Acorn Woodpecker (Melanerpes formicivorus), which are very common, and don’t seem to hold it against me that Edison took out their granary when they replaced the telephone pole at the corner of the lot last year. No doubt they’re re-stocking somewhere nearby. They’re not content to wait for the acorns to fall; they pull them right off of the tree. 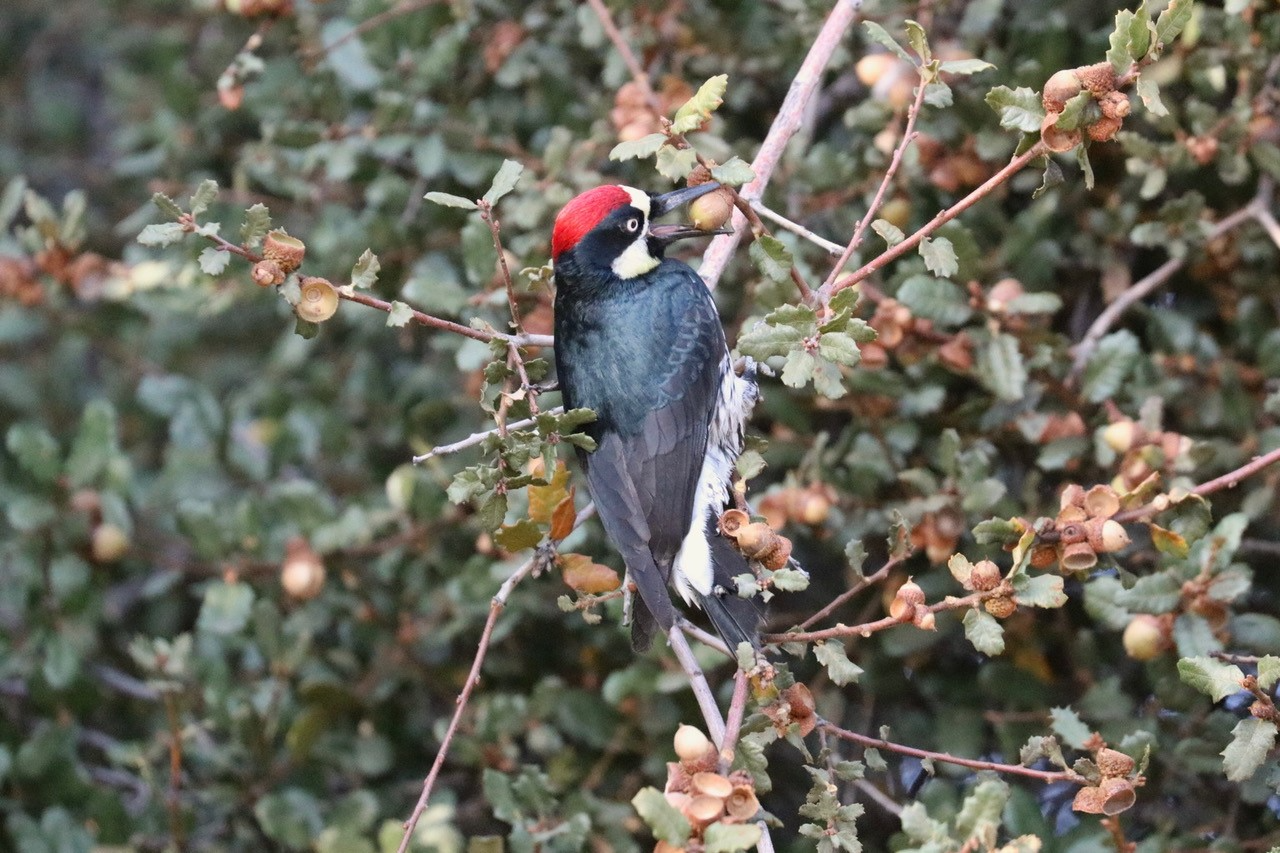 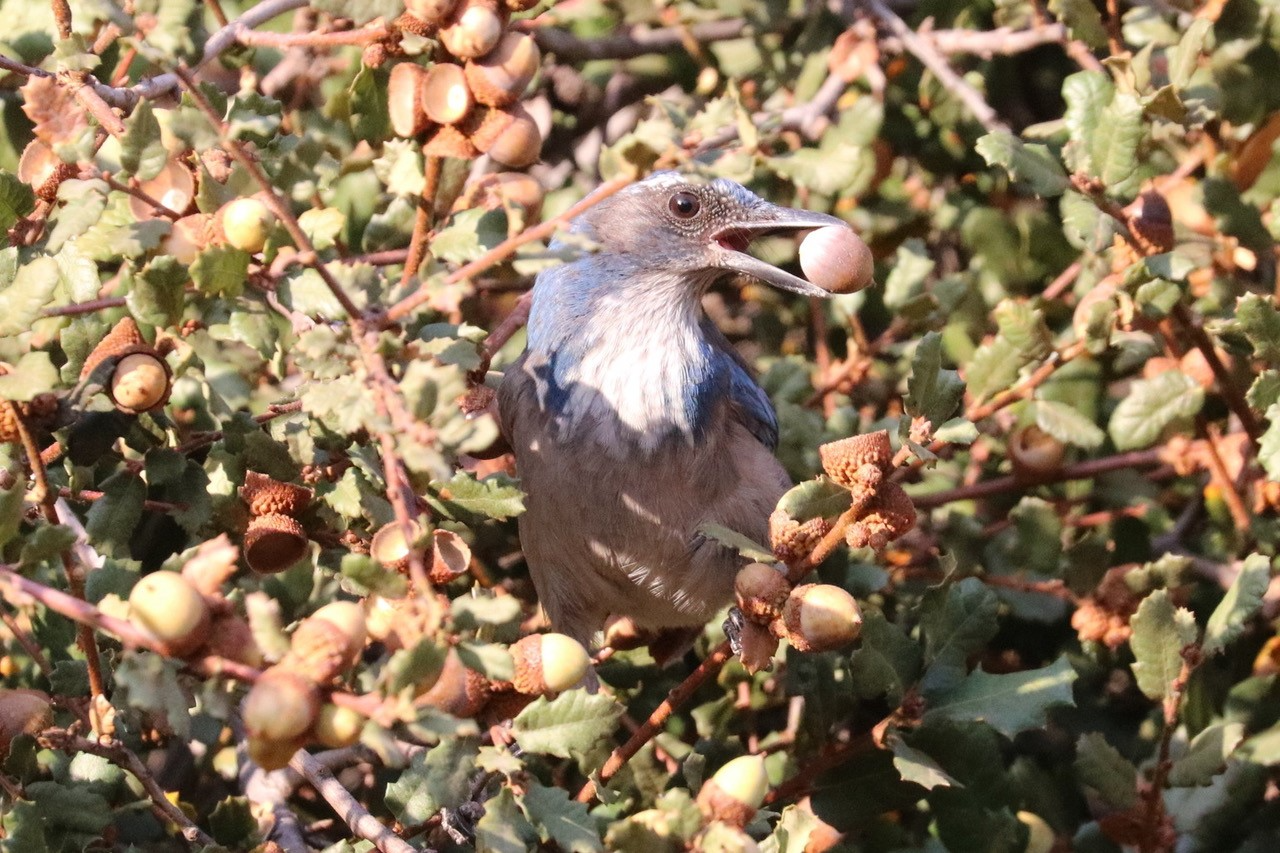 But they’ll also pick up the odd stray that makes it to the ground if they can get to it before the deer. 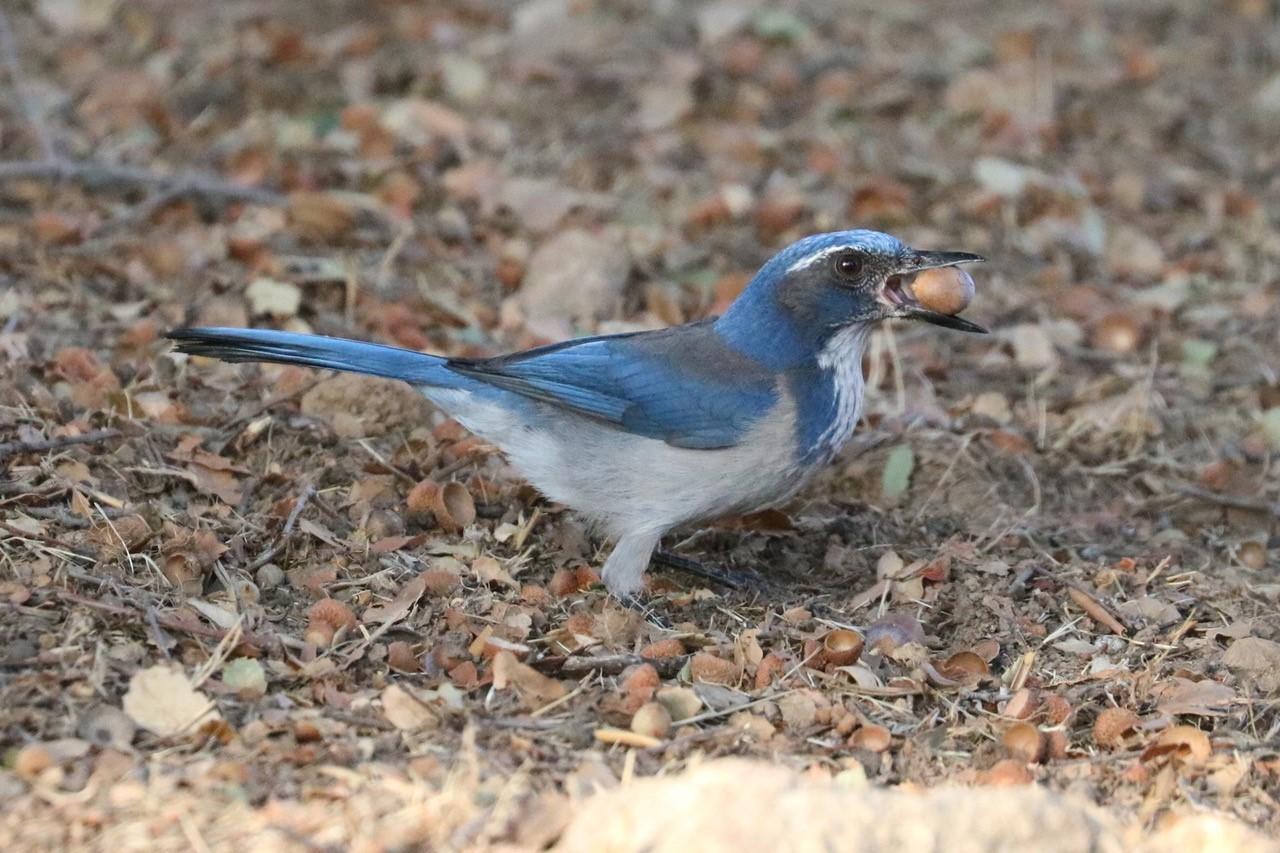 The acorn woodpeckers are by far the most common woodpeckers (and they are very chatty), but occasionally I get other varieties dropping in. Here is a female Northern Flicker (Colaptes auratus). 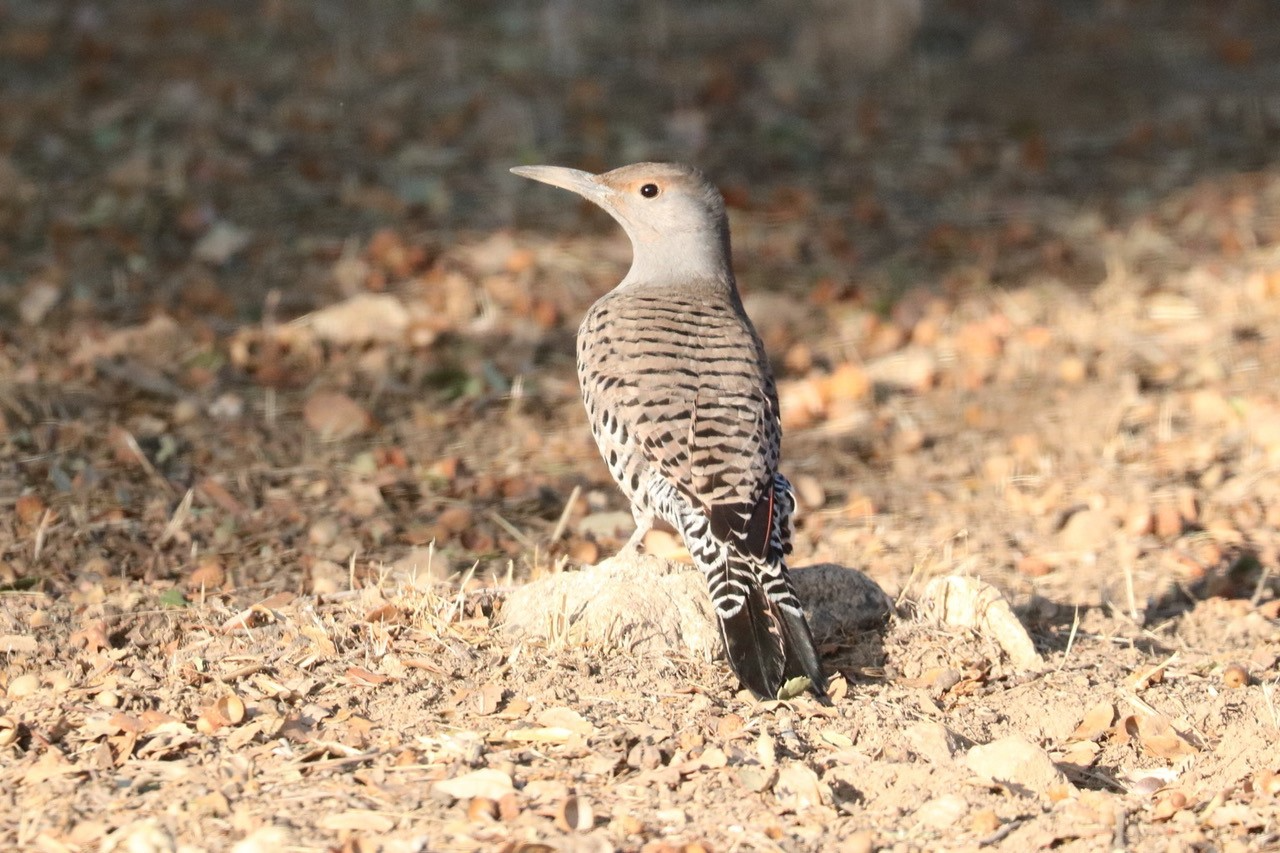 Another “northern” bird in this southern place is the Northern Mockingbird (Mimus polyglottos). 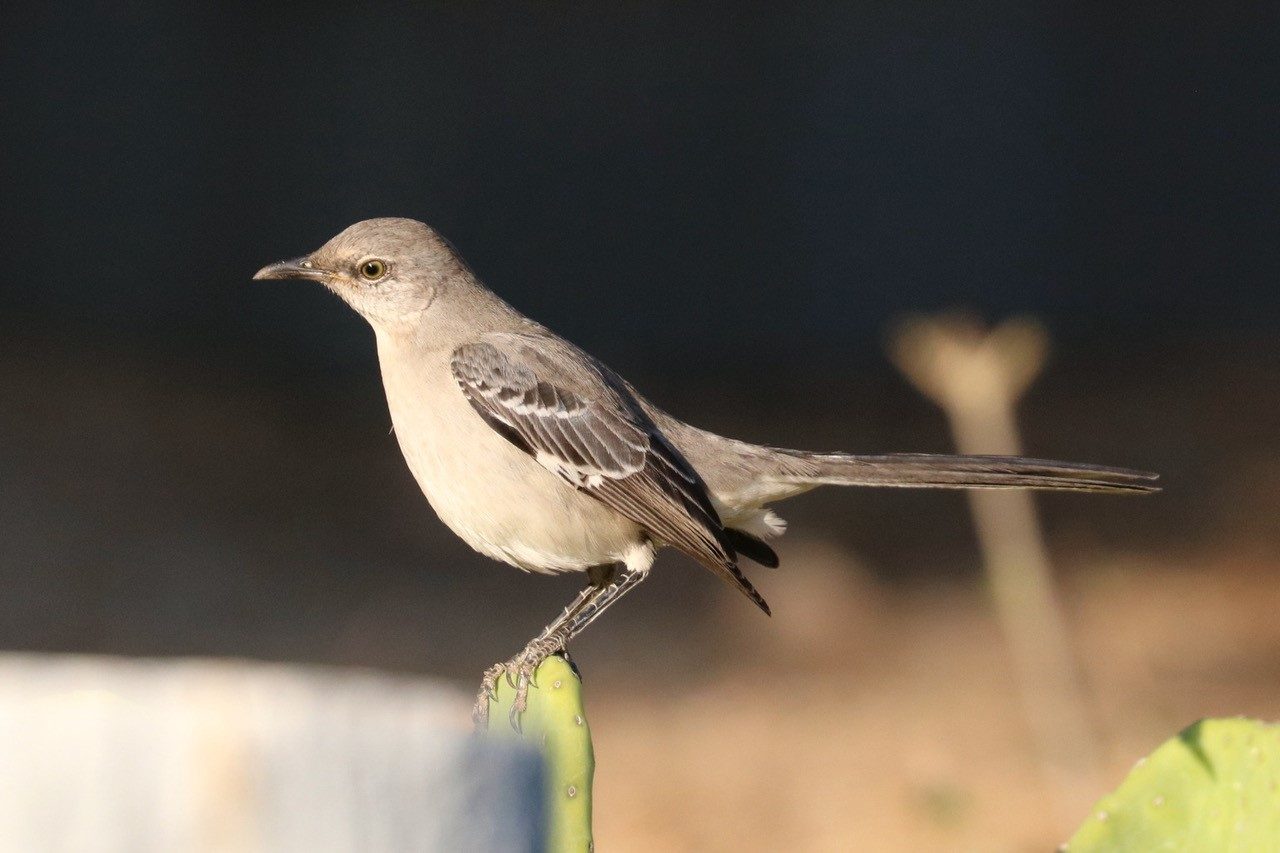 The bushes and cactus outside the window also make convenient perches for smaller birds. Here’s a California Towhee (Melozone crissalis): 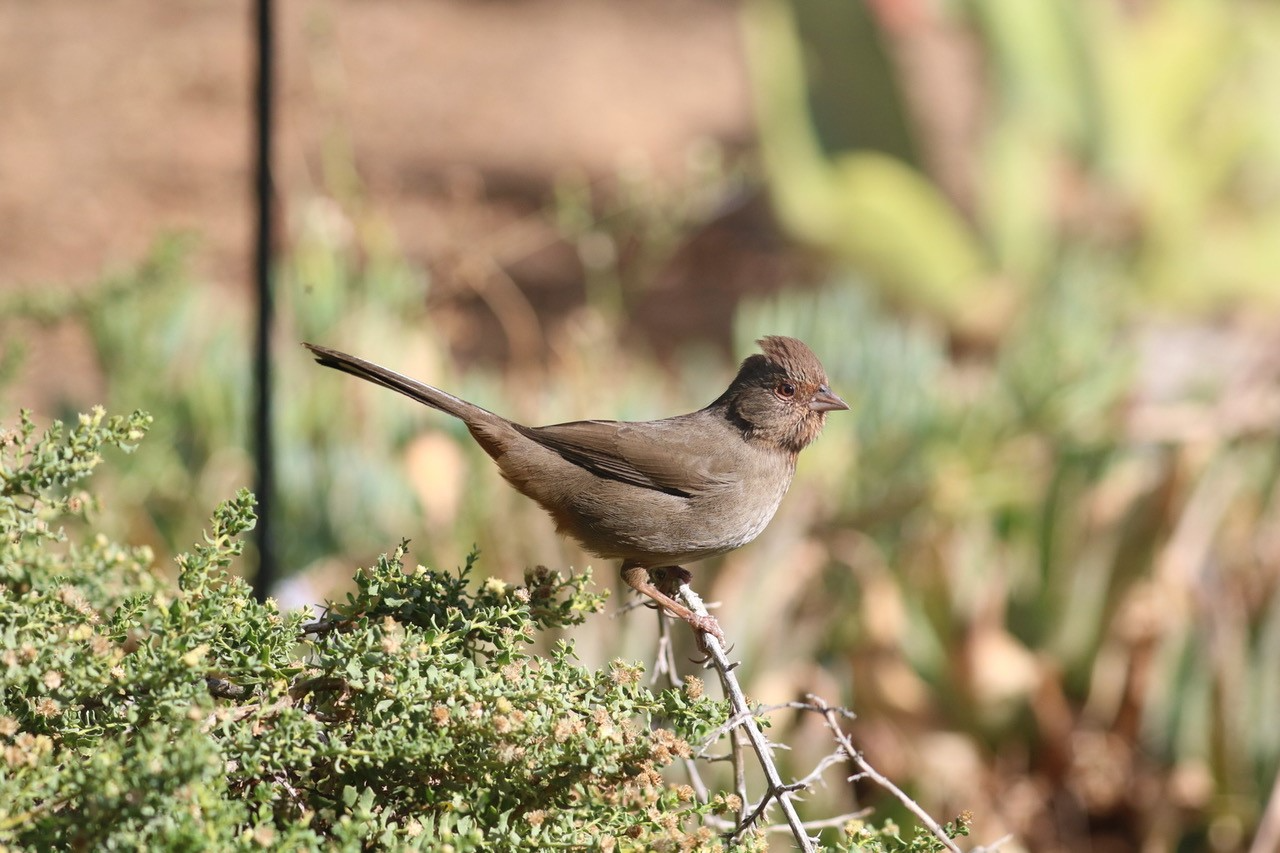 And its relative, the Spotted Towhee (Pipilo maculatus), here foraging on the ground: 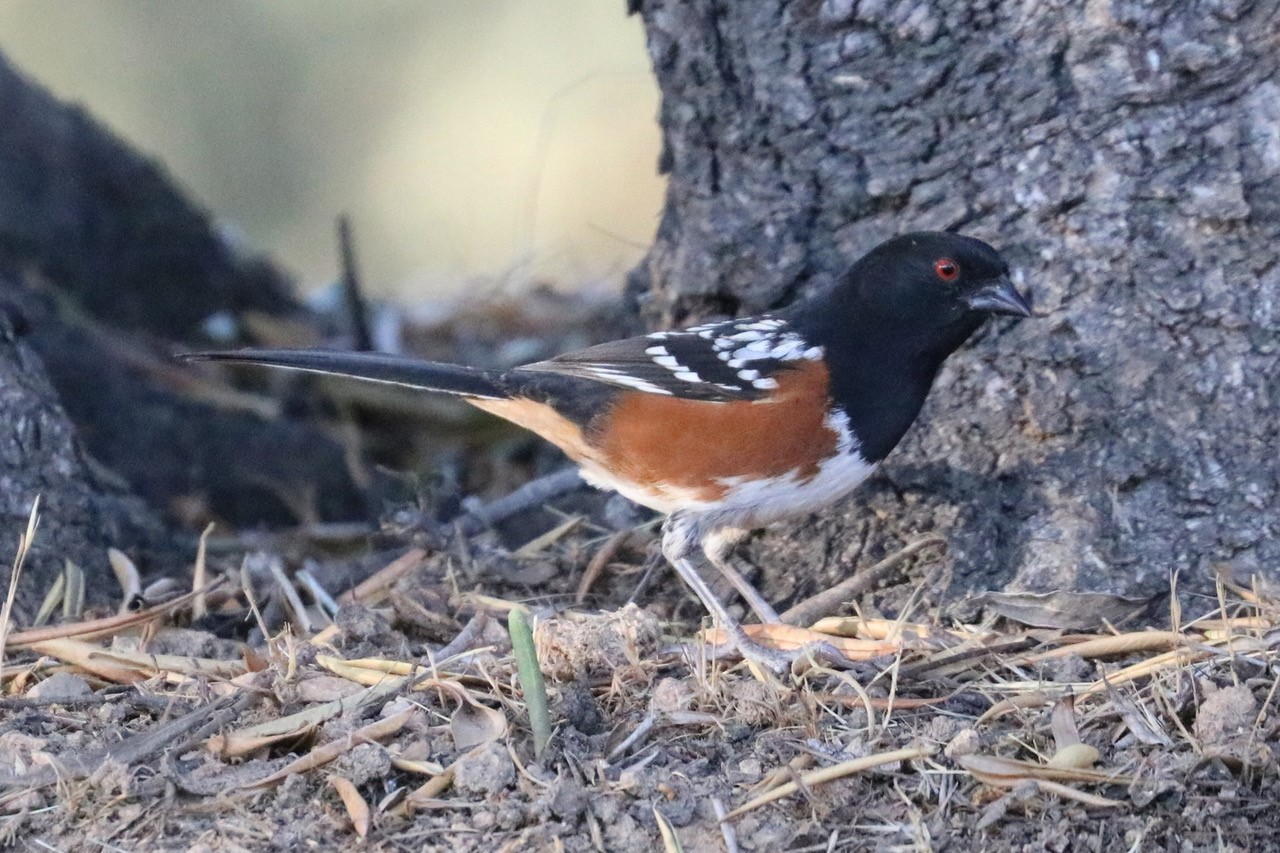 And finally, another ground-forager, the Mourning Dove (Zenaida macroura). I’ve see flocks of 10–15 of these out in the meadow in recent weeks. This time of year, the pickings are surely slim, but there must be something that attracts them. 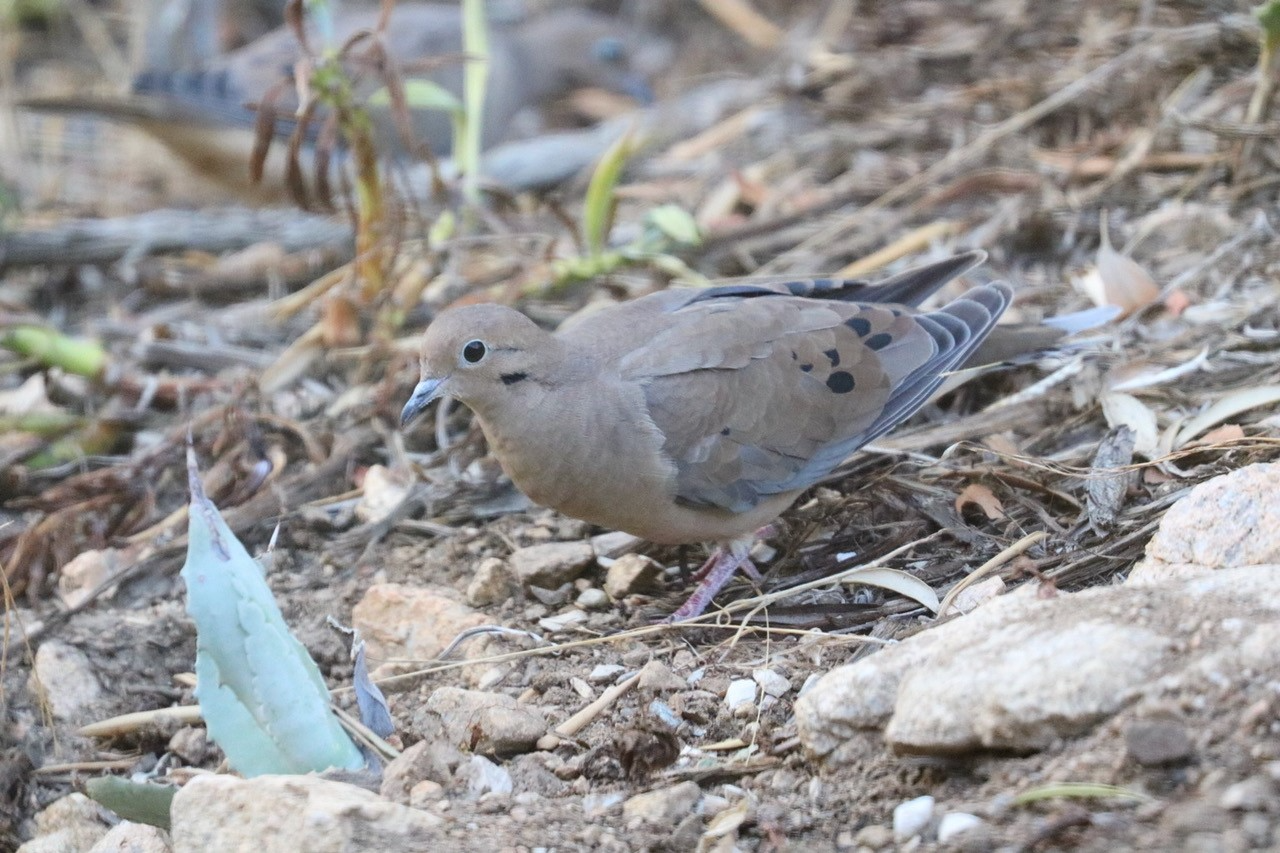 (*) Regarding the name of the meadow: turns out the land behind my studio was owned by the Marx Brothers back in the 1950s and 1960s. (Probably explains the horse feathers lying around.) It’s part of the Angeles National Forest now. It’s kept bare eight months of the year due to fire danger, but for four lovely months in the spring, it’s a beautiful grassy meadow. This time of year, calling it a “meadow” is a bit of a stretch, but “Marx Bros. Dirt And Gravel And Bits of Dead Stuff” just doesn’t roll off the tongue as well.

P.P.S. Literally as I was putting this collection together I caught a glimpse of a flyover out of the corner of my eye and rushed outside in time to catch this Red-Tailed Hawk (Buteo jamaicensis) circling overhead: 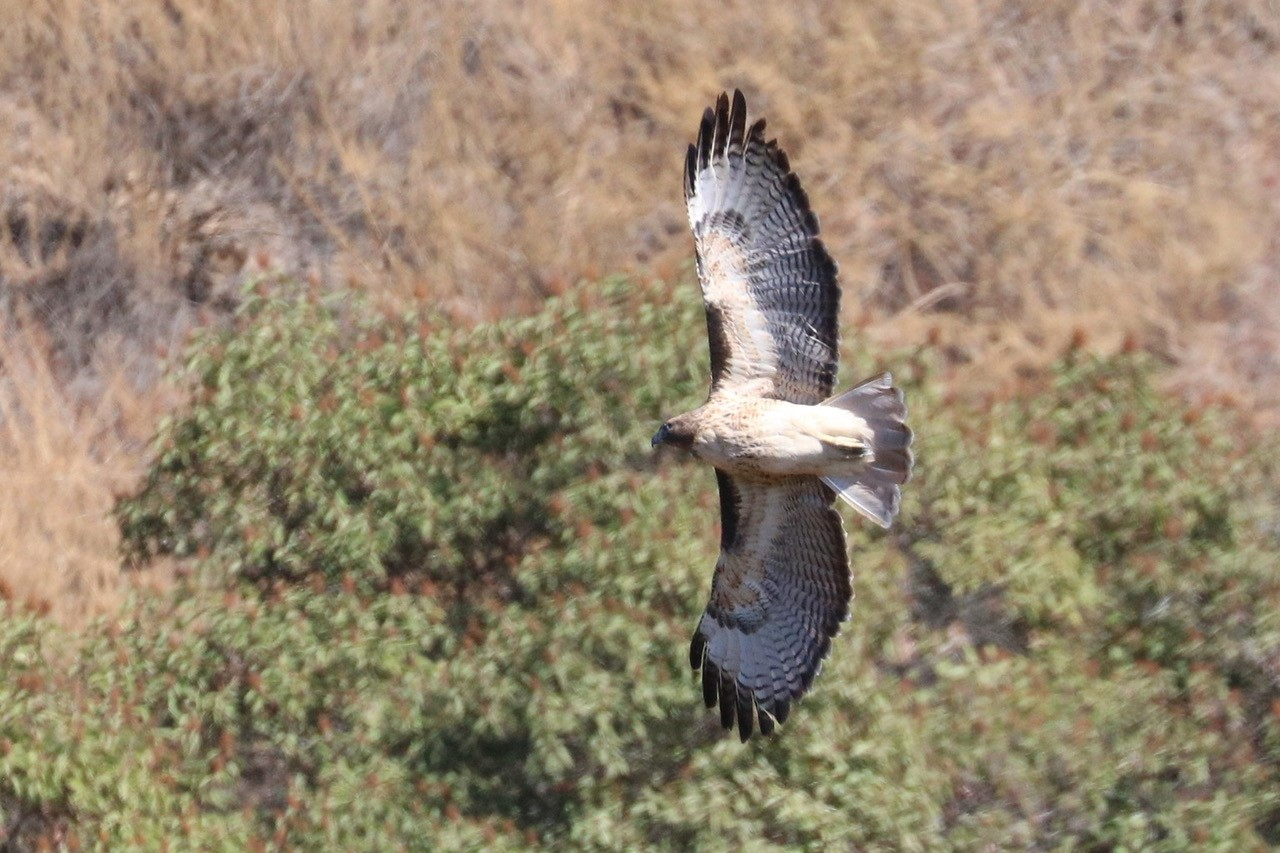 It doesn’t look very red-tailed from the underside, but when it made a low swoop, it became pretty unmistakeable. (It also blends in with the dead chaparral pretty well.) 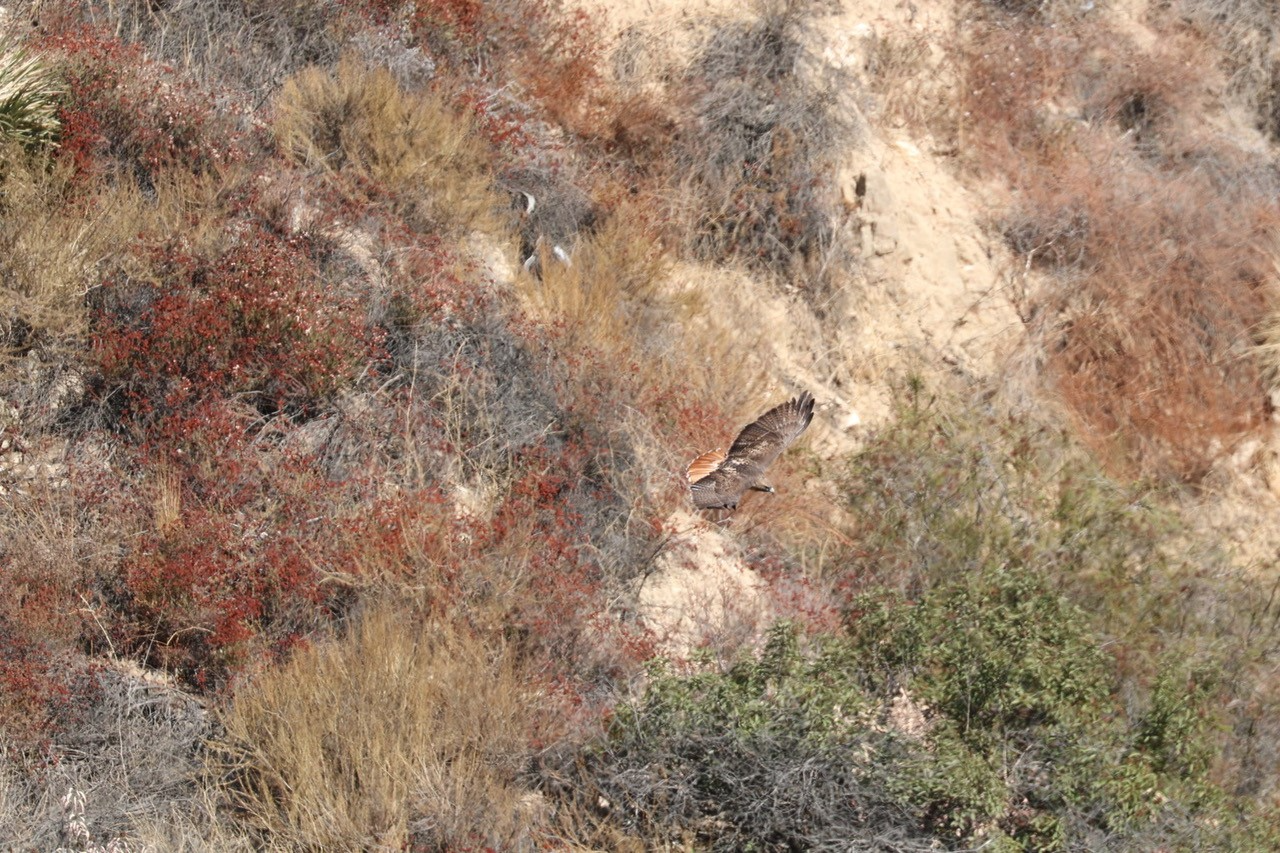 My productivity has taken a definite hit since moving here: there are way too many animal distractions (and it never seems to get old).