The Guardian is the British equivalent of HuffPost, and Suzanne Moore, one of its premier op-ed writers, has become the British equivalent of Bari Weiss.  For Moore, who had a distinguished career—winning among other awards the Orwell Prize and the British Press’s “Columnist of the Year”—has now been hounded out of her job. Of course it’s because she wrote a piece that offended the Woke, which enraged over three hundred of her colleagues, who wrote a group letter denouncing her. After her editors refused to defend Moore’s right to publish her views, she quit.

She describes this incident, and also her entire career, in a new piece at UnHerd (click on screenshot below). It’s long and rather discursive, and, truth be told, I didn’t find the details of her career all that interesting (the cutesy prose didn’t help), though I felt sorry for her travails in trying—successfully–to break into an all-male domain. The piece gets interesting when she describes how her colleagues hounded her out of the paper after she wrote a column about sex, gender, and transsexuals. (No surprise about the reaction: there is no deviation permitted from Accepted Thought about transsexuals. 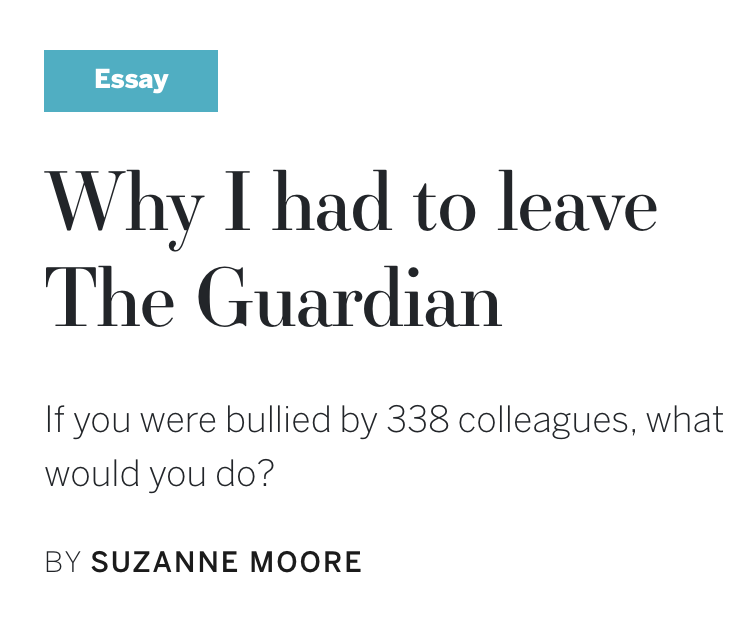 The skinny: in March of this year, Moore published the column below, which isn’t all that inflammatory—unless you take the extreme hard line on sex and gender: i.e., that both are social constructs, and that transsexual women are in all relevant respects identical to biological women.  I’ve put a few quotes from the column below, but read it for yourself and judge how “harmful” it really is:

Moore’s big sin was to say that in some respects transsexual women are not the same as biological women—not with respect to their presence in prison or other spaces (I’m thinking of halfway houses, sports, or as rape counselors). She also affirmed the indubitable fact that biological sex is binary and not a social construct. (Moore does see gender as a social construct):

The radical insight of feminism is that gender is a social construct – that girls and women are not fated to be feminine, that boys and men don’t have to be masculine. But we have gone through the looking-glass and are being told that sex is a construct. It is said that sex is merely assigned at birth, rather than being a material fact – actually, though, sex is recognisable in the womb (which is what enables foetal sex selection). Sex is not a feeling. Female is a biological classification that applies to all living species. If you produce large immobile gametes, you are female. Even if you are a frog. This is not complicated, nor is there a spectrum, although there are small numbers of intersex people who should absolutely be supported.

. . . Male violence is an issue for women, which is why we want single-sex spaces. Vulnerable women in refuges and prisons must be allowed to live in safe environments – the common enemy here is the patriarchy, remember? How did we arrive at a situation where there are shocking and rising numbers of teenage girls presenting at specialist clinics with gender dysphoria, while some who have transitioned are now regretful and infertile?

Even if you disagree with her take, you can’t doubt that the issue, given the way many women feel, is certainly discussable, and surely material for an op-ed column. But the Authoritarian Left have rendered it non-discussable, and that’s why, after her column was published, Moore was the (unnamed) subject of a letter sent to the paper by 338 of her colleagues, many of whom were her friends—but not one of them bothered to call her. Here’s the letter: 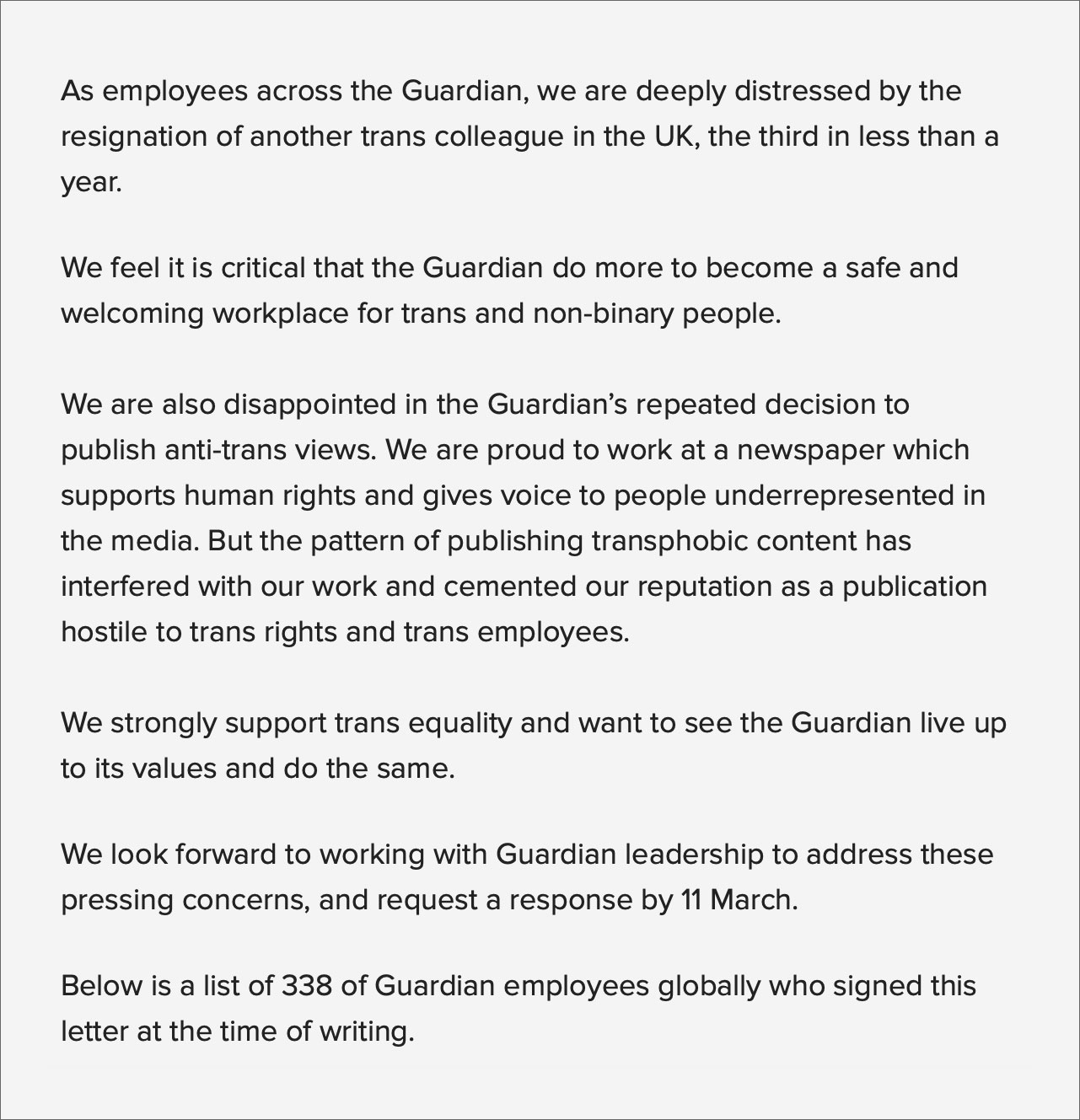 She was of course hurt, and even more so when her editors declined to defend her piece. What the hell is going on at the Guardian when its editors can’t even say, “We allow our op-ed writers the liberty of their own opinions and have no further comment”?

And so a couple of excepts from her UnHerd piece:

I was discussed at “conference”, the newspaper morning meeting open to all: editorial, digital, advertising, everyone. (It looks like equality, but some people sit on the floor and others get seats, let’s put it that way.) I never go in to the office, or attend conference, but it was reported that a trans woman developer, who had already resigned some weeks earlier, resigned again that morning, because my words, my column, had made her feel unsafe. According to the news story: “the column was ‘the straw that broke the camel’s back,’ the trans employee said, following a series of pieces that pitted trans people against women and against women’s rights.”

The “unsafe” bit is simply a canard, and I don’t buy it for a minute. In fact, we’d all be better off if we started questioning these ubiquitous claims of feeling “unsafe,” which rarely make sense.

The letter made it clear to me that it wasn’t just social media activists who wanted me out of the paper. My fellow staff were gunning for me: time to hand over my job to the young Corbyn crew who spend their lives slagging off the mainstream media but cannot wait to be part of it. Could they write a good sentence? Say something from the heart? Does that matter? Apparently not, they simply think the right things.

The letter was then leaked to Buzzfeed and then the names were made public. I was devastated to find people who I like and had worked with had done this. In 30 years of journalism I have often disagreed with people and had stand-up rows with them but no one has ever done something so underhand as to try and get someone fired because of one column.

. . . Mistakenly, I thought my editors would stand up for me because that was my experience at other papers; or they might issue a public statement. They didn’t. There was some internal email, and I hear it was discussed at the Scott Trust, which governs the paper. What this means I genuinely have no idea. Nor do I understand what editorial independence means any more. Do they? Not in my book.

This to me was utter cowardice. Shouldn’t you stand by your writers? But on this issue the Guardian has run scared. I suspect this is partly because of Guardian US sensitivities and, partly because the paper receives sponsorship from the Open Society foundation, which promotes trans rights.

To be sure, there were people who supported Moore, and one even did so publicly, but most did so sotto voce: after all, they didn’t want to be fired or demonized.

So Moore quit the Guardian, just as Bari Weiss quite the New York Times after hounding from her fellow writers. And shame on the Guardian for their refusal to defend their writers.  Nor can we hope that Moore’s column will make things easier. As she says:

The censorship continues and I cannot abide it. Every day another woman loses her job and a witch-burning occurs on Twitter. My fear is not about trans people but an ideology that means the erasure of women — not just the word, but of our ability to name and describe our experience. We are now cervix-havers, birthing parents, people who menstruate. On Amnesty’s latest posters to support the women’s strike in Poland, the literal translation from Polish for the thousands of women who were protesting the awful tightening of abortion laws was: “I stand with people in Poland”. Which people? Women forced to give birth on a plastic sheet to a dead baby with foetal defects? Say it.

We must not be afraid of being called “transphobes”, which we are not if we merely point out socially relevant differences between transsexual women and biological women. For most purposes there aren’t relevant differences, but sometimes there are, and we need to talk about them. Pity that the Authoritarian Left has made “transphobe” a slur to be feared, just as they’ve done with “Islamophobe” or “racist”. Those labels are just easy ways to shut people up. We can’t stifle ourselves (as Archie Bunker often importuned Edith) for fear of a label.