There’s been some argument around these parts about whether Wokeism will increase or decrease when Trump is gone. On the “increase”, side, Biden is seen as an enabler of Wokeism, supposedly instantiated in his increasing leaning toward the Left, and in the fact that now the “progressive” left now sees a big opportunity to advance its program. (We’ll ignore the Senate for the time being.)

On the “decrease” side, one could argue that Wokeism was aggravated by Trump’s racism and the ascendancy of Republicans, and will calm down after Trump leaves. Some have conjectured, too, that Wokeism is exacerbated by the pandemic: people with not a lot to do can nurture and express their grievances.

My own view is that Wokeism is not going away any time soon, for the fear of being labeled a bigot—one of the main motivation for the excesses of Leftism and identity politics—is too deeply instilled in the Left to disappear. It also dominates liberal media, as well as universities. Biden, while he might not buy into it, won’t repudiate it, either: after all, he’s proclaimed himself the Great Compromiser. So I expect I’ll be at this for a while.

Andrew Sullivan, on the other hand, thinks that the election represents a national repudiation of Wokeism, implying that it’s on its way out. Now, he dislikes these excesses as much as I, but the Woke don’t have to be the most numerous to prevail—they just have to be the loudest. Most important, they hold the trump card (excuse me) of being able to play on people’s guilt. And with guilt comes power.

At any rate, Sullivan’s take on the election, in his latest column at The Weekly Dish (now a subscribers-only site), has three interesting takes, all given in the title. I’ll take them in order, giving some quotes and a few reactions of my own. If you’re a subscriber, you can click on the screenshot, but you’ve probably already read his Friday column. I won’t quote him this extensively in the future as people who want to read him should subscribe. 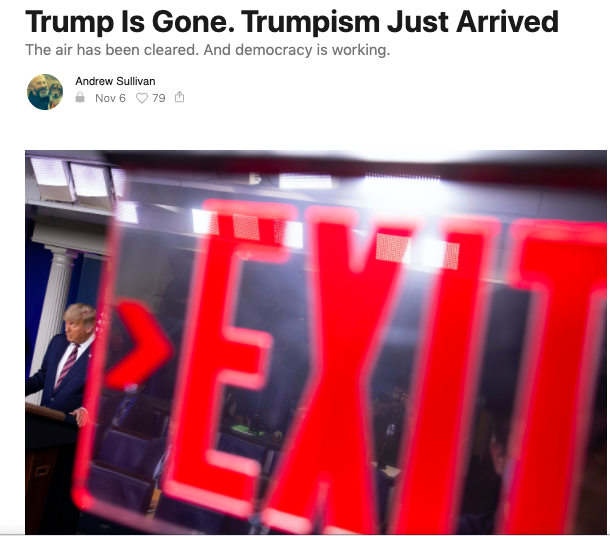 Sullivan’s “Trumpism”: a conservatism he desires.  I had thought that Sullivan was slowly moving left, but perhaps the Right just moved further right. At any rate, he sees in the election a repudiation of Trump as a person (Sullivan, who detests him, strongly approves), but not all the principles he stood for, and some of those principles appeal to Sullivan:

This was far from the Biden landslide I had been dreaming about a few weeks back. It was rather the moment that the American people surgically removed an unhinged leader and re-endorsed the gist of his politics. It was the moment that Trump’s core message was seared into one of our major political parties for the foreseeable future, and realigned American politics. If Trump were sane, this is how he would describe his success — and leave office graciously to become the kingmaker in his own party. But he is not sane.

His impact, however, is undeniable. Neoconservatism is over; globalization as some kind of conservative principle is over; a conservatism that allows for or looks away from unrestrained mass immigration is over. What was cemented in place this week is a new GOP, not unlike the new Tories in the UK. They’re nationalist, culturally conservative, geared toward the losers of capitalism as well as its winners, and mildly protectionist and isolationist. It is a natural response to the unintended consequences of neoliberalism’s success under a conservative banner. And it speaks in a language that working class Americans understand, devoid of the woke neologisms of the educated elite. It seems to me that this formula is a far more settled and electorally potent coalition than what we now see among the deeply divided Democrats.

Now Sullivan doesn’t come straight out and say he likes this new kind of conservatism, but given what I know of his opinions, I think he does. And I’m not sure that his “new GOP” is really a thing, especially when he says it’s geared “toward the losers of capitalism as well as its winners.” Some of those losers are working-class whites, but many are people of color. It’ll be a cold day in July when blacks and Hispanics see the GOP as their party, despite their  movement towards it in this election and despite the socialists’ claim that class rather than color is important. If they’re right, capitalism’s “victims” should be on the Democrats’ side.

Trump’s appeal. I mentioned the other day that I think it’s both foolish and divisive to characterize everyone who voted for Trump as a racist. Many, I think, are not, but were either voting their pocketbook or wanted a law-and-order regime to counteract this summer’s protests. I was pleased to see that Sullivan agrees.

. . . this is where I think I have been wrong about Trump’s appeal, and where I think I’ve misunderstood why otherwise decent people could support such a foul disrupter of democratic norms. Many of them simply didn’t take Trump’s threat to our system seriously. They took all his assaults on democracy as so much bluster from the kind of car salesman he is. They deal with this kind of bullshit all the time, took liberal democracy for granted and saw little reason to fret about its future. The writer Jamie Kirchick says that everything Trump says makes sense if it is preceded by the following words: “And now, Donnie from Queens, you’re on the air.” Many people heard Trump exactly that way, and couldn’t see what all the fuss was about. They weren’t endorsing his madness. They were looking past it. They were, in my opinion, wrong to be so cavalier. But I don’t think most were malignant extremists of any kind, or unaware of the hideous personal qualities of Trump.

And they enjoyed economic rewards that, absent the Covid19 recession, might well have swept Trump to victory. One of the more revealing results from the polls this year came in the answers to the core question made famous by Reagan: “Are you better off now than you were four years ago?” In previous campaigns to re-elect the president, Reagan was re-elected in a landslide with only 44 percent saying they were better off, George W. Bush won with 47 percent and Obama succeeded with 45 percent. For Trump, a mighty 56 percent said they were better off now than when he took office — a fundamental along with incumbency that should have led to a landslide re-election — and yet he still lost. That tells you something about Americans’ understanding of how unfit a president Trump turned out to be, even as they felt very good about their own wellbeing.

Many—perhaps most—Americans vote based on their own advancement, or lack thereof, under the last administration. (Even law and order is about personal safety rather than societal safety.) This is, again, something that much of the Left fails to understand. I don’t know if it explains the higher-than-expected vote for Trump, but if we’re to make any progress in the next four years, we have to stop the total demonization of our opponents. And that means we should stop tossing the term “racist” around cavalierly, and telling everyone they’re either an explicit or a secret racist.

Which brings us to Wokeism. As I noted, Sullivan sees the election as a repudiation of at least the “Woke Left”, and of identity politics.

[The election] was also clearly and unequivocally a rejection of the woke left. The riots of the summer turned many people off. In exit polls, 88 percent of Trump voters say it was a factor in their choice. On the question of policing and criminal justice, Trump led Biden 46 — 43 percent. For the past five years, Democrats have been telling us that Trump and his supporters were white supremacists, that he was indeed the “First White President” in Ta-Nehisi Coates’ words, that all minorities were under assault by the modern day equivalent of the KKK. And yet, the GOP got the highest proportion of the minority vote since 1960! No wonder Charles Blow’s head exploded. [Note that he cites Blows’s editorial I discussed yesterday.]

We may find out more as exit polling is pored over, but in the current stats, Trump measurably increased his black, Latino, gay and Asian support. 12 percent of blacks — and 18 percent of black men — backed someone whom the left has identified as a “white supremacist”, and 32 percent of Latinos voted for the man who put immigrant children in cages, giving Trump Florida and Texas. 31 percent of Asians and 28 percent of the gay, lesbian and transgender population also went for Trump. The gay vote for Trump may have doubled! We’ll see if this pans out. But it’s an astonishing rebuke of identity politics and its crude assumptions about how unique individuals vote.

Why did minorities shift slightly rightward after enduring four years of Trump? First off, many obviously rejected the narrative being pushed out by every elite media source: that the core of Trump’s appeal was racism. They saw a more complicated picture. I suspect that many African-Americans, for example, were terrified of “defunding the police” and pleased to be economically better off, with record low unemployment before Covid19 hit. Many legal Latino citizens, perplexing leftists, do not want continued mass immigration, and are socially conservative. Asians increasingly see the woke as denying their children fair access to education, and many gays just vote on various different issues, now that the civil rights question has been largely resolved by the Supreme Court.

Obviously a big majority of non-white and non-straight voters still backed Democrats. But the emergence of this coalition of minority conservatives is fascinating — and, of course, a complete refutation of what critical race theory tells us how minorities must feel. Ditto the gender gap. It’s there, but not quite the gulf we were led to believe. We have again been told insistently that being female in America today is a constant nightmare of oppression, harassment, violence and misogyny; and that no one represents this more potently than Donald “grab ‘em by the pussy” Trump. And yet white women still voted for Trump 55 to 43 percent. Among white women with no college education, arguably those most vulnerable to the predations of men, Trump got 60 percent support. This is not a wave of rage; and it suggests that the left’s notion of patriarchy is, in 2020, something many, many women just don’t buy, or do not believe should outweigh other, more important issues.

I’d like to think that Sullivan is right here, and he may well be.  But the Woke are still there, writing for the New York Times and the New Yorker, filling the colleges with highly-paid diversity consultants, and agitating to defund the cops.  All it takes for them to prevail is for others on the Left to go along from fear of being called a bigot or of being excoriated on social media.

43 thoughts on “Andrew Sullivan on Trump’s appeal, Trump’s legacy, and the electoral repudiation of Wokeism”