Welcome to Friday, November 6, 2020: National Nachos Day, celebrating a dish whipped up in 1940 by a Mexican chef just beyond the U.S. border to feed four hungry American women. Back then, nachos (the nickname of Ignacio, the chef) consisted of fried corn tortilla strips, pickled jalapeños, and cheese, but they’re gotten a lot more elaborate. Meet “Nachos Supreme“—just the ticket to accompany (along with a good brewski), the election returns. 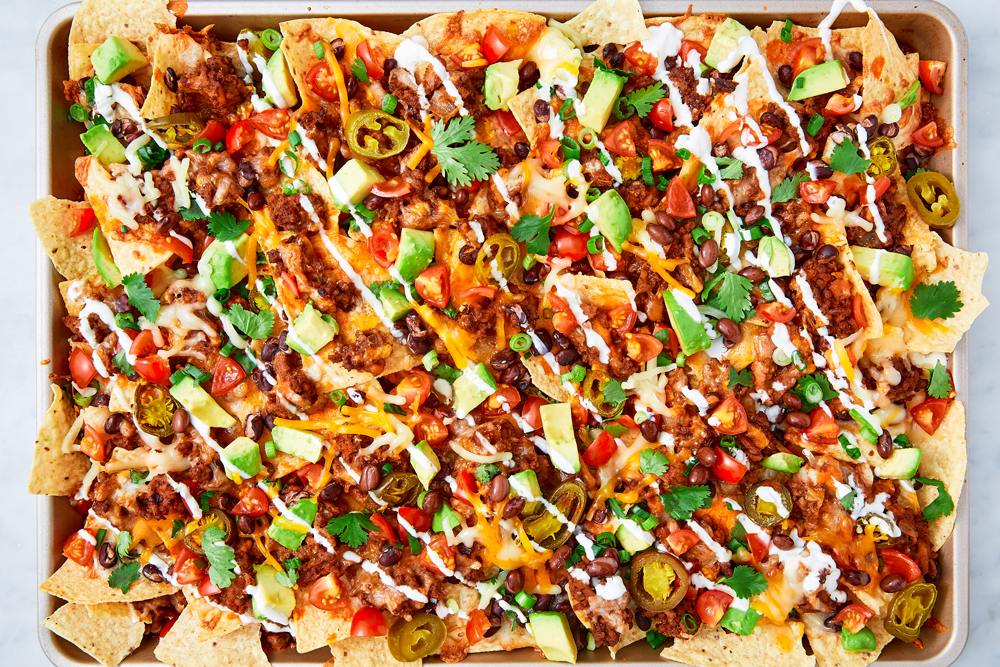 As of this moment (Thursday night), the NYT isn’t pulling any punches in its news articles about the election: 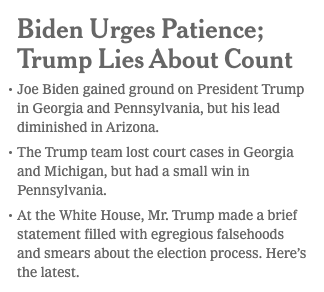 If you want to see the lies, here’s Trump’s bloviating. If you didn’t see this, you need to:

This is a real trip: Paula White, Trump’s spiritual advisor, prays for his victory, casting out election demons and summoning angels from Africa and South America. She also speaks in tongues. What a loon! (h/t Michael).

A depressing but probably accurate op-ed in the Washington Post by Paul Waldman: “Mitch McConnell’s Senate may be where the Biden Presidency goes to die“. The title tells it all. An excerpt:

As of now, Democrats lost one Senate seat and gained two, giving them 48. While it’s theoretically possible for them to get to 50 given the races where votes are still being counted, it looks extremely unlikely. Which means McConnell will remain as majority leader.

What does that mean? For starters, you can take all those meticulously prepared policy plans Biden and his team devised during the campaign and toss them in the trash. There will be no expansion of health coverage, no aggressive legislation to address climate change, no move toward universal child care, no increase in the minimum wage, no new Voting Rights Act and no infrastructure spending. None of it.

Nor will there be a new stimulus bill to help the economy recover from the pandemic, since McConnell knows that Biden will be blamed if the economy continues to struggle. At most — and even this is no guarantee — McConnell may allow continuing resolutions that keep the government open at its current funding levels. There will be no other significant legislation as long as Republicans retain control.

Some stress relief: meet Mr. and Mrs. White-Christmas.  Over in Dorset, Tilly Christmas wed her childhood sweetheart,  Kieran White, and the couple are taking the name White-Christmas. Here they are: (h/t: Jez) 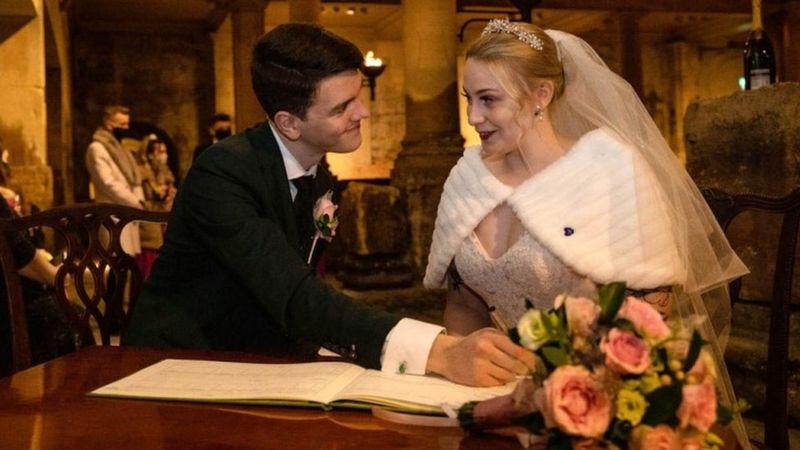 It was a thin day in history. Stuff that happened on November 6, 2020 includes:

Finally, those who drew their last breath on this day include just one notable death:

Well, we have to look that up, don’t we? Here’s what Medium says:

When he died on November 6, 1816 at the age of 63, Morris was one of the most respected figures in the country. Sadly, his demise was caused by a bizarre set of circumstances that was ultimately caused by his own hand.

Suffering from a possible urinary tract infection, he took the almost unimaginable step of inserting a piece of a whale bone as a homemade catheter into his penis in an attempt to clear the blockage. In doing so, he caused serious internal injuries, which transitioned into an infection. He declined quickly, passing away at his family home back in New York (what is now the Bronx) in the same room in which he was born.

The home surgery was a last-ditch effort for relief. Leading up to that extreme step, he had tried a variety of treatments, including laudanum, bleeding, cupping and a veritable cornucopia of homeopathic concoctions. Nothing significantly helped with his ability to urinate, which must have taxed him as much mentally as it did physically.

And that’s it. These are the fewest events I’ve reported for any day of the year so far.

Meanwhile in Dobrzyn, Hili is deeply concerned. When I asked why, Malgorzata said this, “Well, the situation is not good. Yesterday we had over 27,000 Covid-19 cases and almost 400 fatalities. Our neighbours are in the same (or in an even more leaky boat). Women in Poland are still protesting about the abortion restrictions but they seem to have a chance to achieve a fat zero. Islamic terrorists are killing people in droves in Africa and Asia. Terrorists are threatening Europe (France, Austria). I could continue… ”

Hili: This is a very serious situation.
A: Where?
Hili: Everywhere. 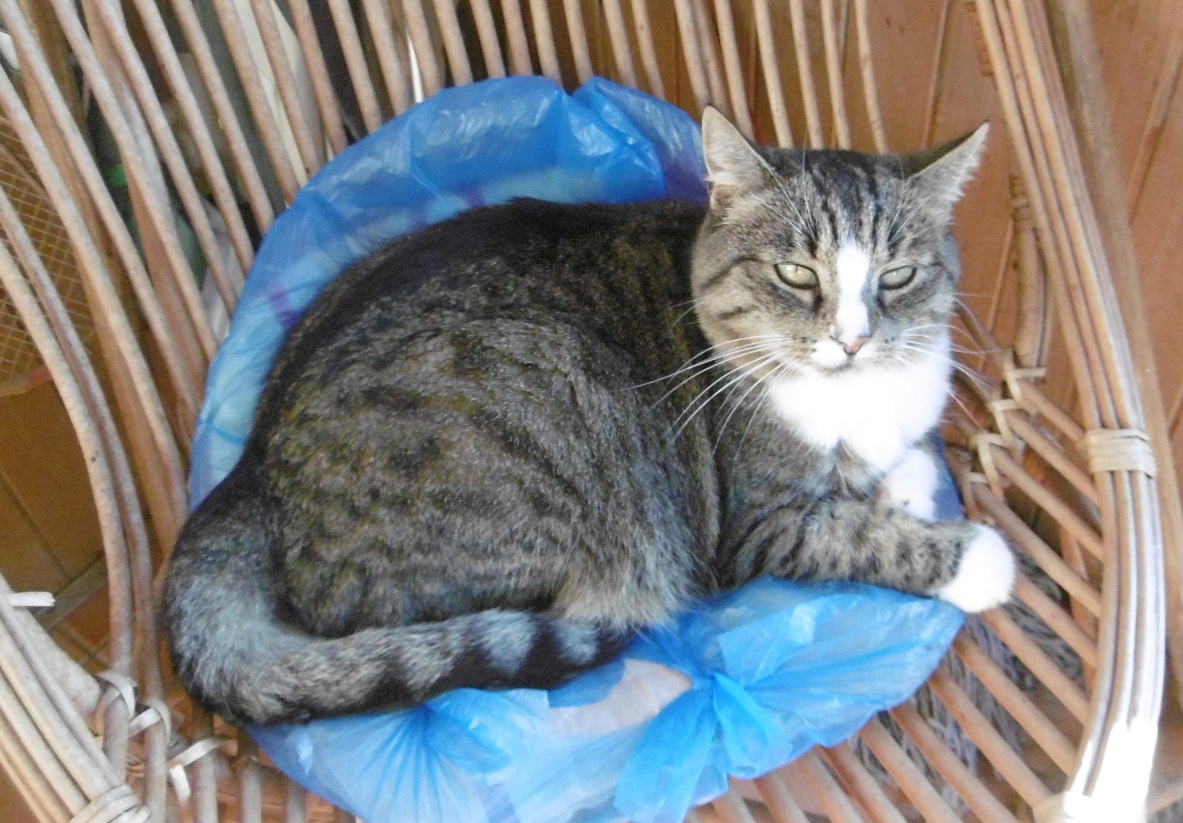 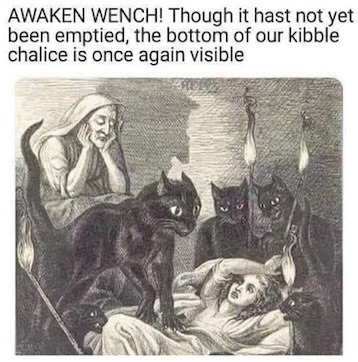 From reader Pliny the in Between’s site The Far Corner Cafe, posted the day after election day. Be sure to look at toes: 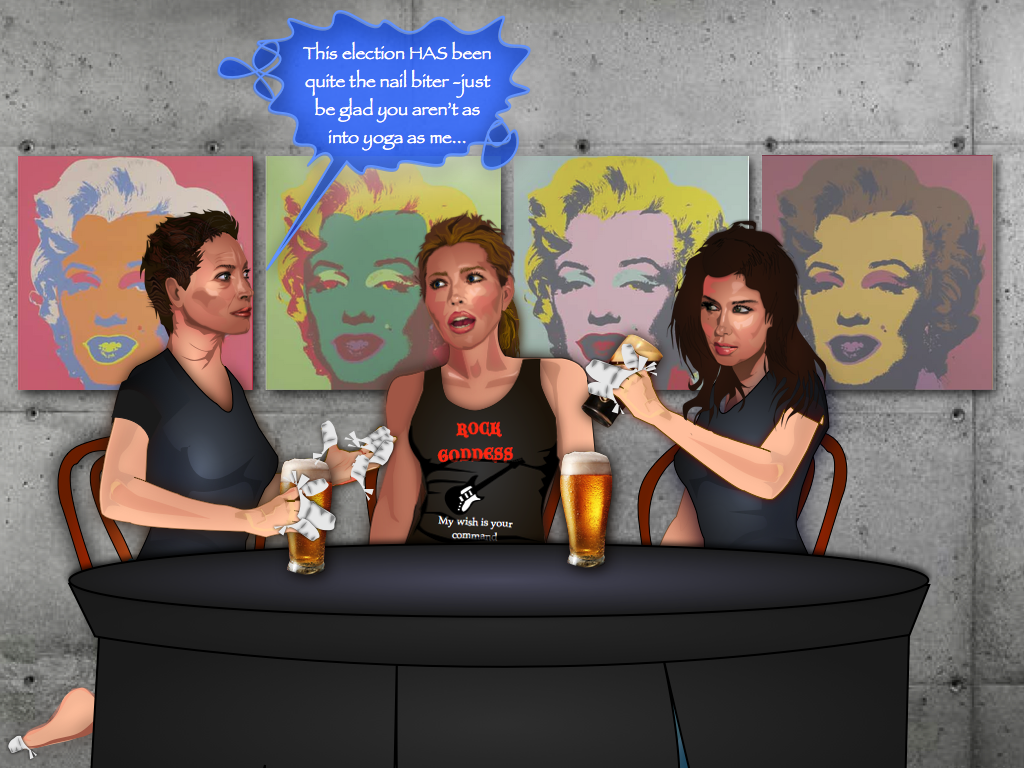 Also from Jesus of the Day: (this could be real baby food in Sweden!) 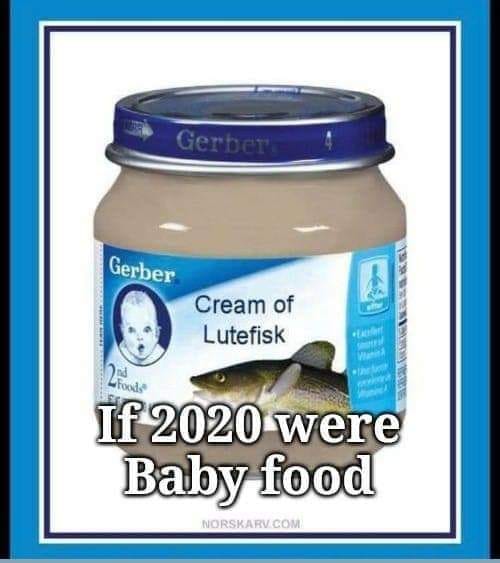 From reader Ken, who comments, “Donald John Trump, soi-disant leader of the free world, actually tweeted this mash-up of himself dancing to the Village People’s ‘YMCA.’ At 2:57 am on the day of the election. I shit you not.”

From Dom: Harry the Jackdaw talks to England on the eve of its second lockdown:

Lockdown take 2 & my message is still the same…#CorvidAgainstCovid #StayHome pic.twitter.com/YMdmscPO8M

From Luana: The people who had to admit they were racists included the Dean of Northwestern University Law School, James Speta (click on photo), and now the Department of Education has been asked to investigate the law school for structural racism.  This is one byproduct of the ritual confessions and self-denunciations of some “antiracist training”.

From Barry: Why is this guy putting a harness on a squirrel. But that rodent really wants his nut!

Tweets from Matthew. In the first one, Greta gets her own back:

How it started How it's going pic.twitter.com/dmPCgyCiO2

A scale diagram of this year, even though it’s not yet over:

Crikey, this country has elected some morons!

I stopped breathing. I watched in shock and horror. And we wonder how we got to where we are. pic.twitter.com/g1esh4RDjv

Back when stuntmen (and stuntwomen) were insane:

Silent movies did some pretty wild things with trains pic.twitter.com/Njs2qK044p