When the Charlie Hebdo murders occurred in 2015, there were a lot of people who posted or held up signs saying “Je suis Charlie” (“I am Charlie”), touting solidarity with the French and their free-speech policy. We don’t see anything like that with the recent murders in Paris and Nice. Instead, as I’ve mentioned, there are a lot of articles implying that the French, with their strict laïcité policy and supposedly brutal oppression of Muslims, have brought this on themselves (see here and here, for instance).

But there’s at least one website that indicted the media and the cowards for refusing to call out Islamist terrorism in France. As you might expect, it’s not an organ of the mainstream liberal media, but Spiked, a libertarian organ edited by Brendan O’Neill. O’Neill himself wrote the op-ed on France, which you can see by clicking on the screenshot below. 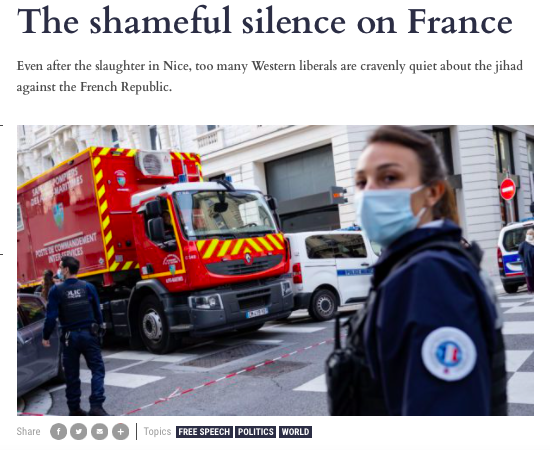 I have nothing to add to what he says, but I wish I’d see more of this in the press.  Nobody, and no religion, is above criticism in a democracy. And if any religion should be criticized often and strongly for its oppressive policies and tenets that lead to violence, it’s Islam. (I’ve also called out other Abrahamic religions, but we don’t see their advocates committing mass murder these days.)

Quotes from the Spiked piece:

Unique among all forms of violent extremism, Islamist terrorism is always viewed as a response to a provocation. If Charlie Hebdo hadn’t published those cartoons, the massacre wouldn’t have happened. If Samuel Paty hadn’t shown kids a picture of Muhammad’s arse, he wouldn’t have become a target for attack. This is as morally degenerate as it would be to say that the Muslims massacred in Christchurch by the racist terrorist Brenton Tarrant brought it upon themselves by attending mosque – don’t they know that’s offensive to white-nationalist extremists? What will the unprincipled excuse-makers for Islamist violence, these people who genuinely believe that France’s ‘Islamophobia’ is a key reason 250 of its citizens have been slaughtered over the past five years, say after Nice? That an old woman going to a Christian church is a provocation? That such public displays of fealty to Christianity are bound to upset Islamists and therefore people should stop doing it? That would be the logical conclusion to the depraved victim-blaming they have engaged in following the Charlie Hebdo, Paty and other atrocities.

The failure of too many liberals to take a stand against the Islamist threat to life and liberty in France makes it harder for us to confront these violent regressive forces. Worse, their criticism of the victims – whether it was famous novelists criticising American PEN’s decision to give a bravery award to Charlie Hebdo or people responding to the beheading of Samuel Paty by talking about the problem of the caricatures – plays into the censorious extremism and violent cult of victimhood that are key aspects of the radical Islamist worldview. Indeed, one of the most worrying trends of our time is the interplay between the woke elites of the West and the ISIS-inspired extremists carrying out barbarous assaults in France and elsewhere: both believe that criticising Islam is wicked and punishable. One side calls it ‘Islamophobia’ and wants to No Platform it, the other calls it blasphemy and wants to execute its practitioners.

. . . Anyone who has so much as hinted at the possibility that the victims of terrorism in France brought their fate on themselves – by speaking or behaving in a particular way – has abandoned the cause of freedom and thrown his lot in with the extremist view that violence is an inevitable, if not understandable, response to those who would dare, whether wittingly or unwittingly, to upset Islamist sensitivities. That’s the question now: will we stand with the French Republic against its internal foe of radical Islam, or will we not? The silence and apologism of too many in the West suggests they’ve made their choice: they have chosen to abandon France when it needs us most.

I don’t often read comments on my infrequent Twitter posts—and never answer them—but when I tweeted out this article, two comments appeared, both by the same person, that exemplify the problem. The response is so obvious that I needn’t give it.

69 thoughts on “Why aren’t we Charlie this time?”