Remember Socks, the White House cat under the Clintons?  Here, from Revelist, is a list of reasons why he was the best of all the Clintons (click on screenshot):

Here are a few: 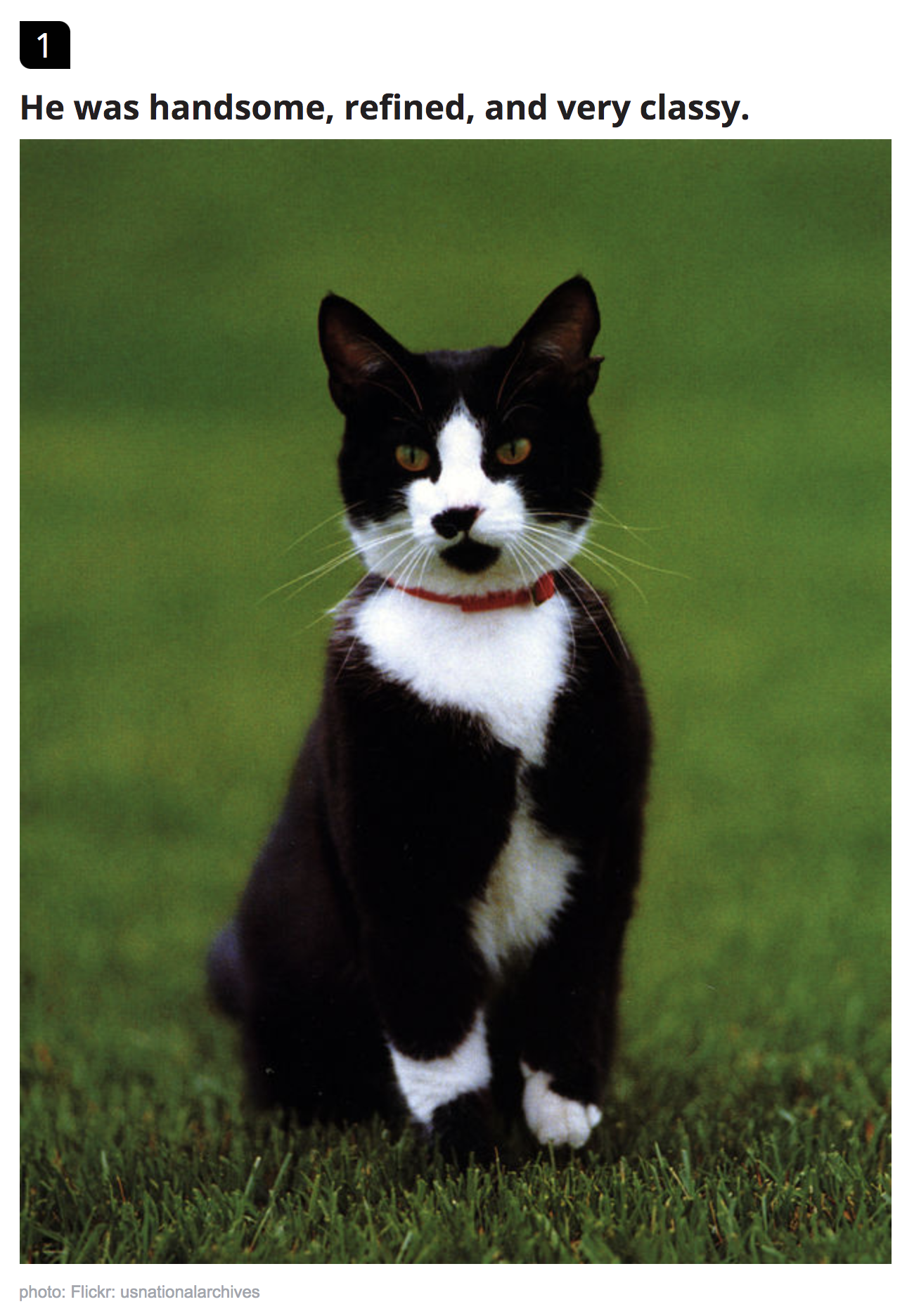 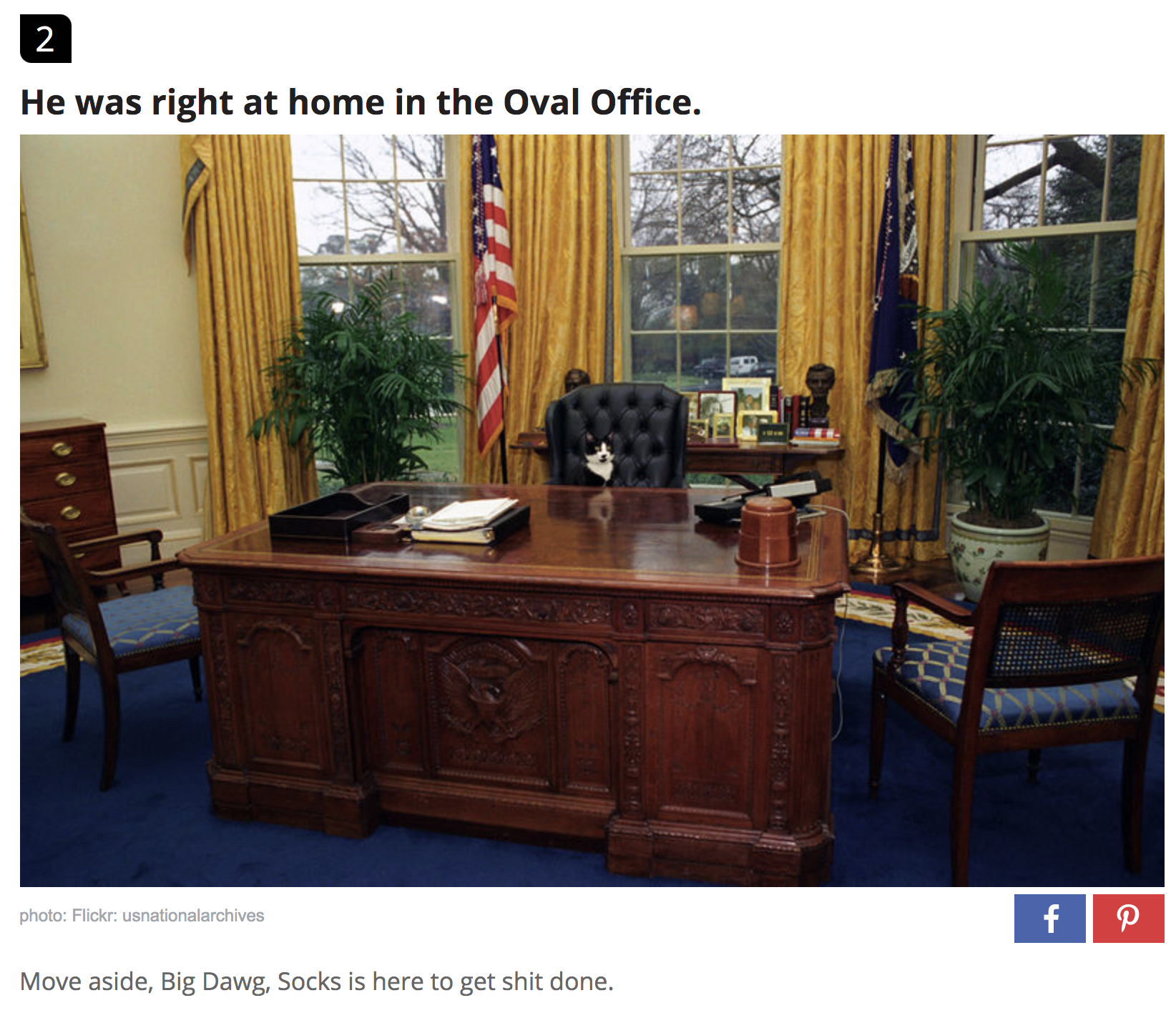 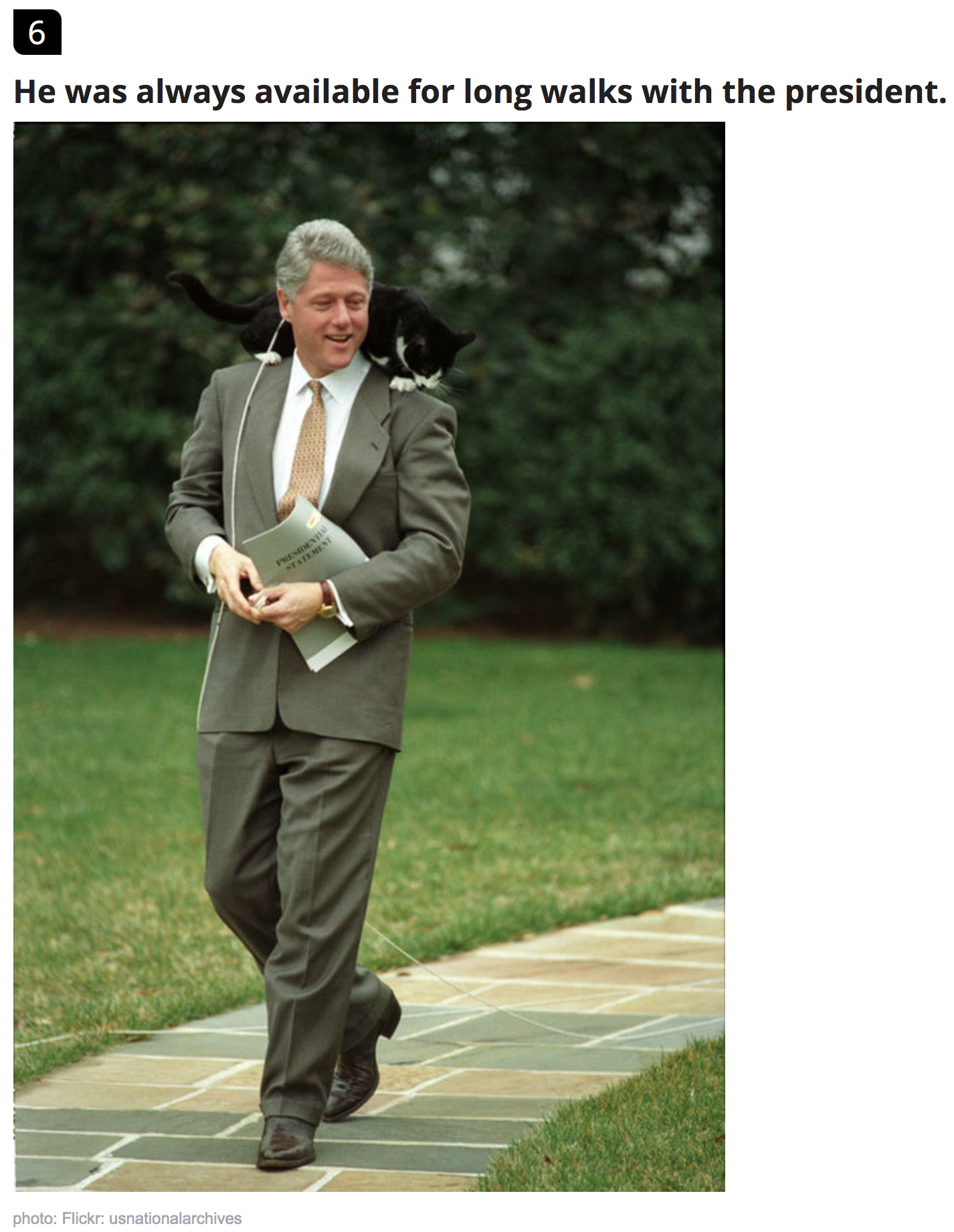 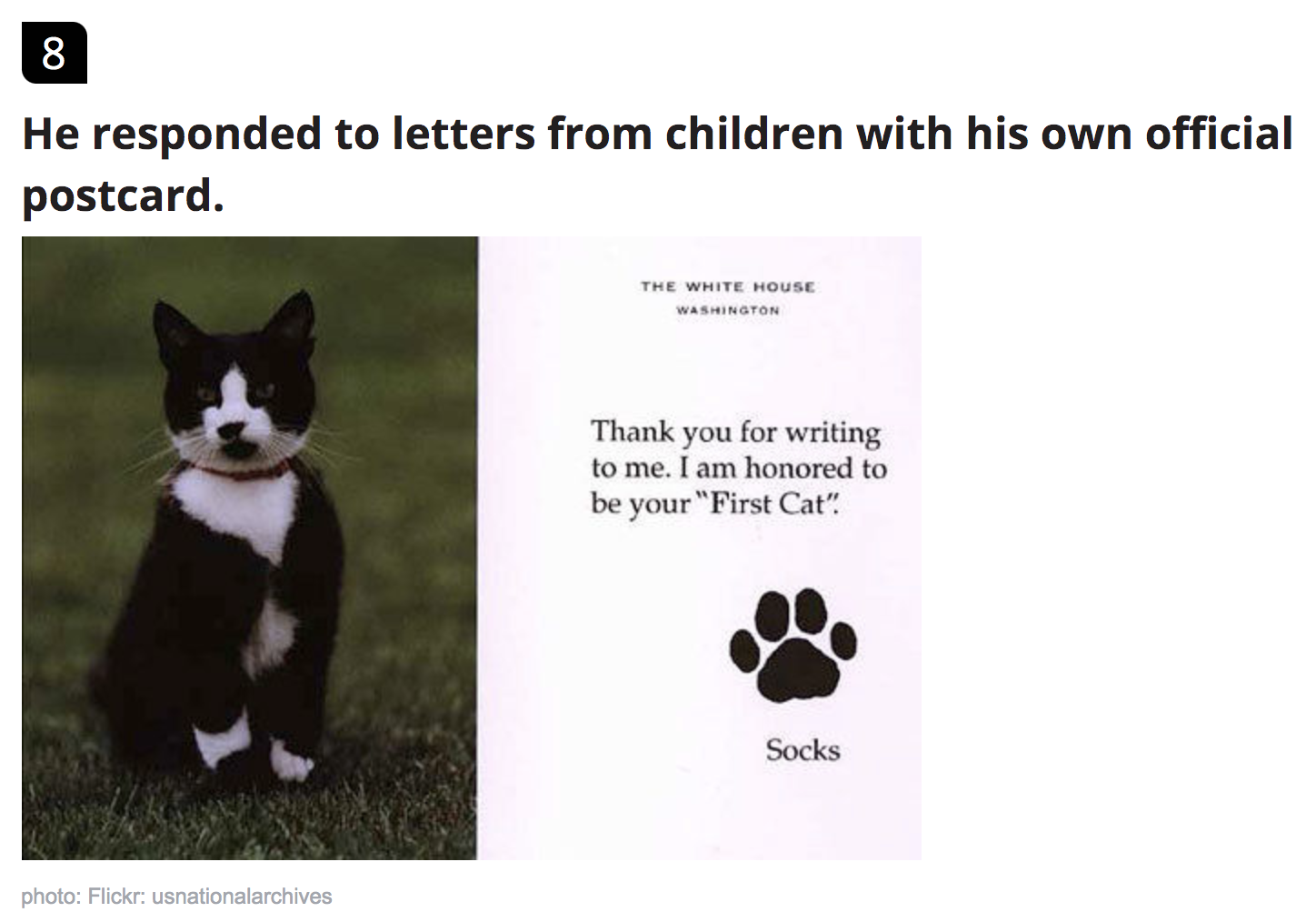 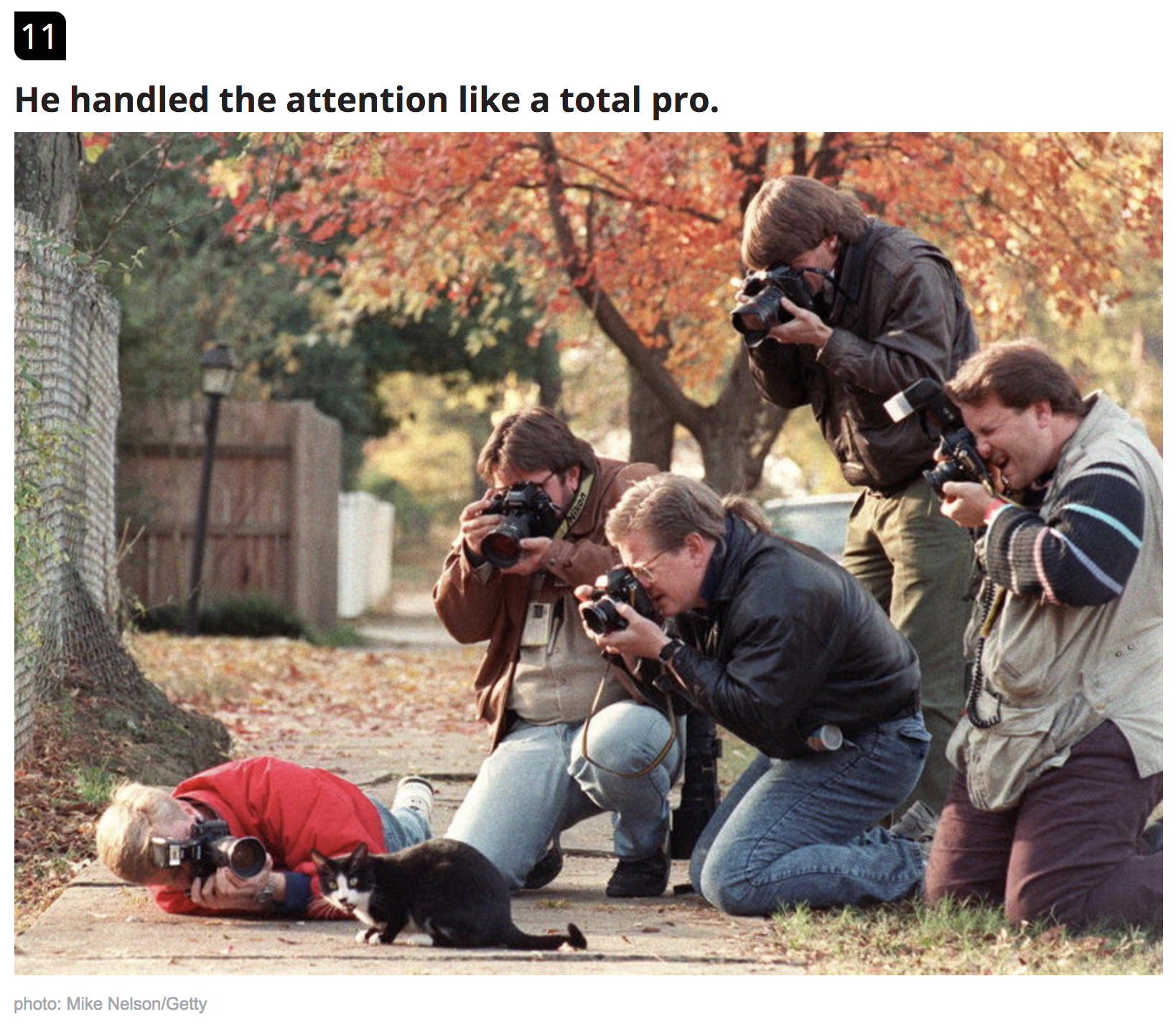 Here he is with Buddy, the White House d*g: 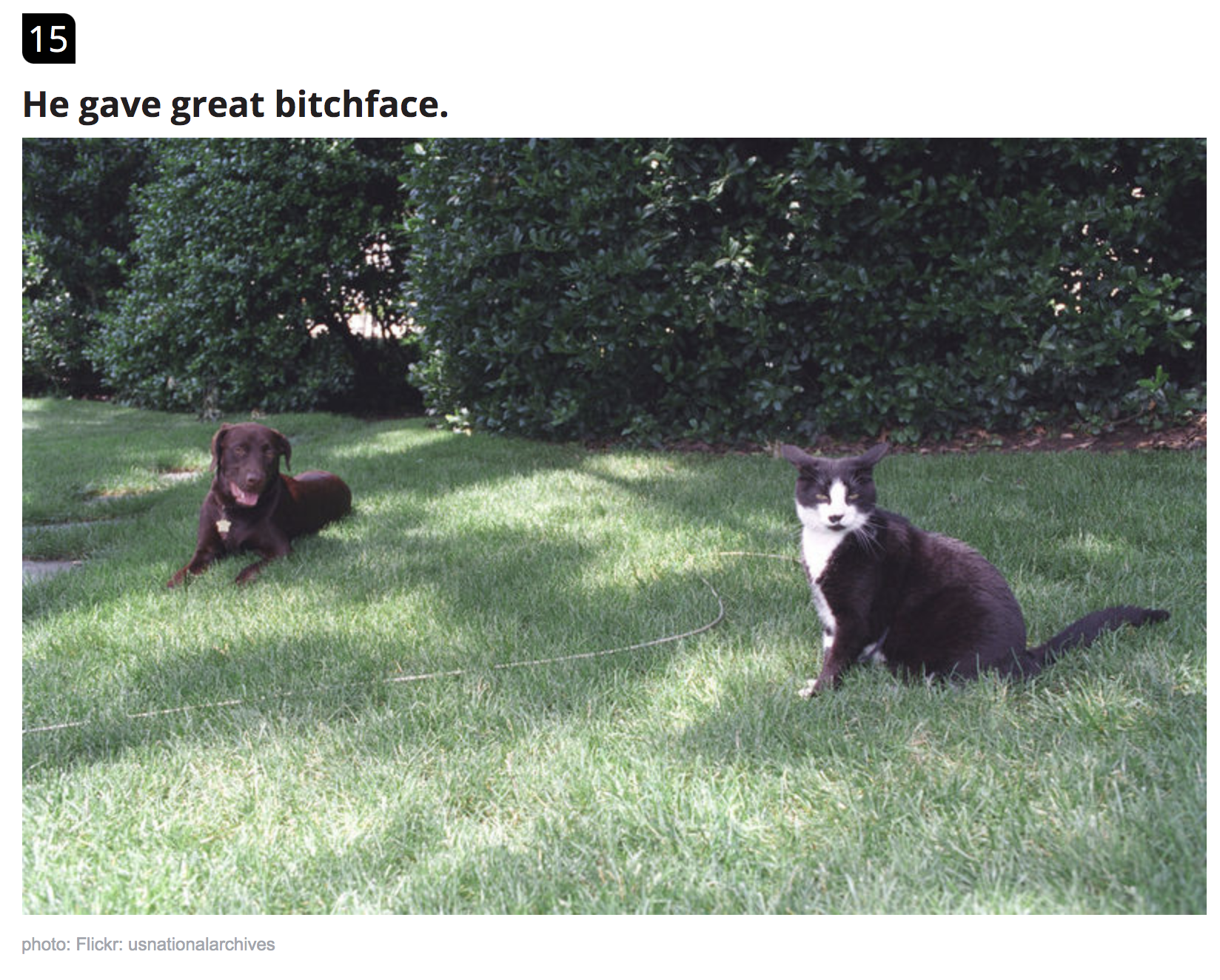 Many readers sent me news articles about the recent discovery of a faintly etched cat among Peru’s famous “Nazca lines“. (I saw them once by hiring, for the stupendous sum of $15, a small plane to fly me over the most famous figures.) Besides the one below from the New York Times, you can read about it in the BBC News and ArsTechnica:

The figure is 37 meters long and is undoubtedly a cat. But is it a puma (Puma concolor), an Andean mountain cat (Leopardus jacobita), or some other species?  We don’t know, nor do we know why these figures, mostly visible only from the air (this cat is an exception) were constructed. All we know is that they were made by the Nazca people between 500 BC and 500 AD and are endangered by human encroachment and weather. Here’s a video about the cat figure.

Here’s one of the most famous Nazca zoomorphic figures (I can’t remember if I saw this one), a hummingbird: 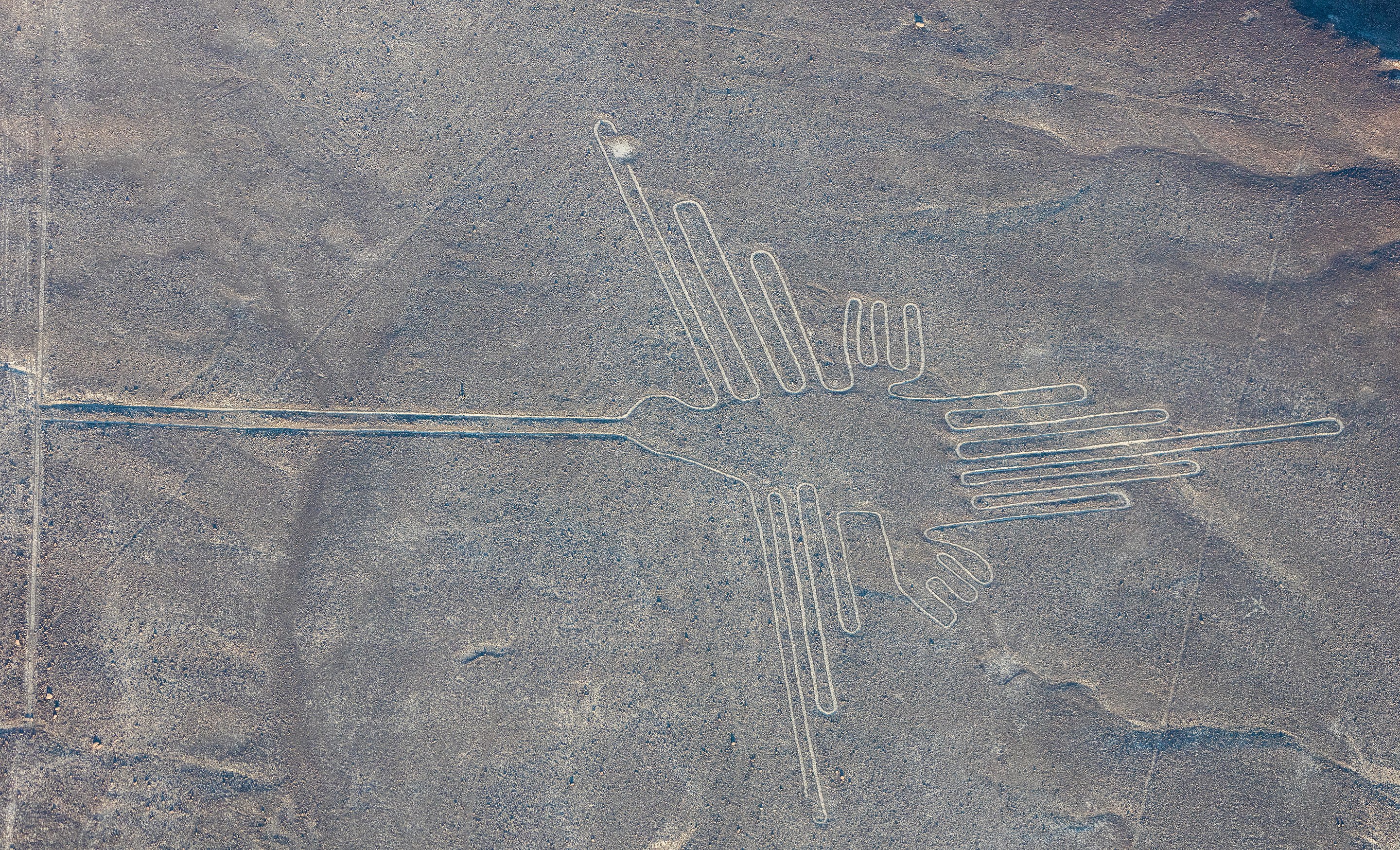 From the Indy Star we have a touching story about inmates at a maximum-security prison who are allowed to take care of cats, which is a fantastic idea.  The cats all eventually get adopted by people outside the prison.

Cats can’t judge men on their wrongdoings. They cannot gauge the gravity of crime, and cannot judge the ink on people’s skin.

Cats are unable to distinguish between street clothes and prison uniforms –– and that’s exactly what makes the relationship between the men at Pendleton Correctional Facility, a maximum-security prison outside of Indianapolis, and the cats that live there, so special.

For six hours a day, seven days a week, a handful of men receive unqualified love from the more than 20 cats that live in the prison as part of the FORWARD program, or Felines and Offenders Rehabilitation with Affection, Reformation and Dedication. In exchange for care and a place to stay before being adopted, the cats at Pendleton offer inmates untampered, non-judgemental affection.

“The evidence from the research shows these pet programs actually have a fantastic effect on increased personal responsibility for offenders,” Solinas-Saunders said. “It increases self-esteem and self-efficacy. It also increases empathy, which is something we are really appreciating these days, in terms of understanding each other’s pain.”

Beyond that, pet programs have resulted in improved relationships within the facility, between the involved offenders and other incarcerated individuals, and between offenders and the staff and administrators –– which is exactly the intended outcome of programs aimed toward rehabilitation.

[Anthony] LaRussa, who is behind bars for conspiracy to commit robbery — which was botched and ended with accomplices murdering four people — has been involved in the program since 2017, when he fell for a 7-year-old cat named Clover. He and his wife have since adopted Clover, and she lives at home with LaRussa’s wife.

Every day, LaRussa and his peers start their morning by 7 a.m. They report to the cat sanctuary, where, like clockwork, the cats await them, dozens of tiny faces longing for the door to open. 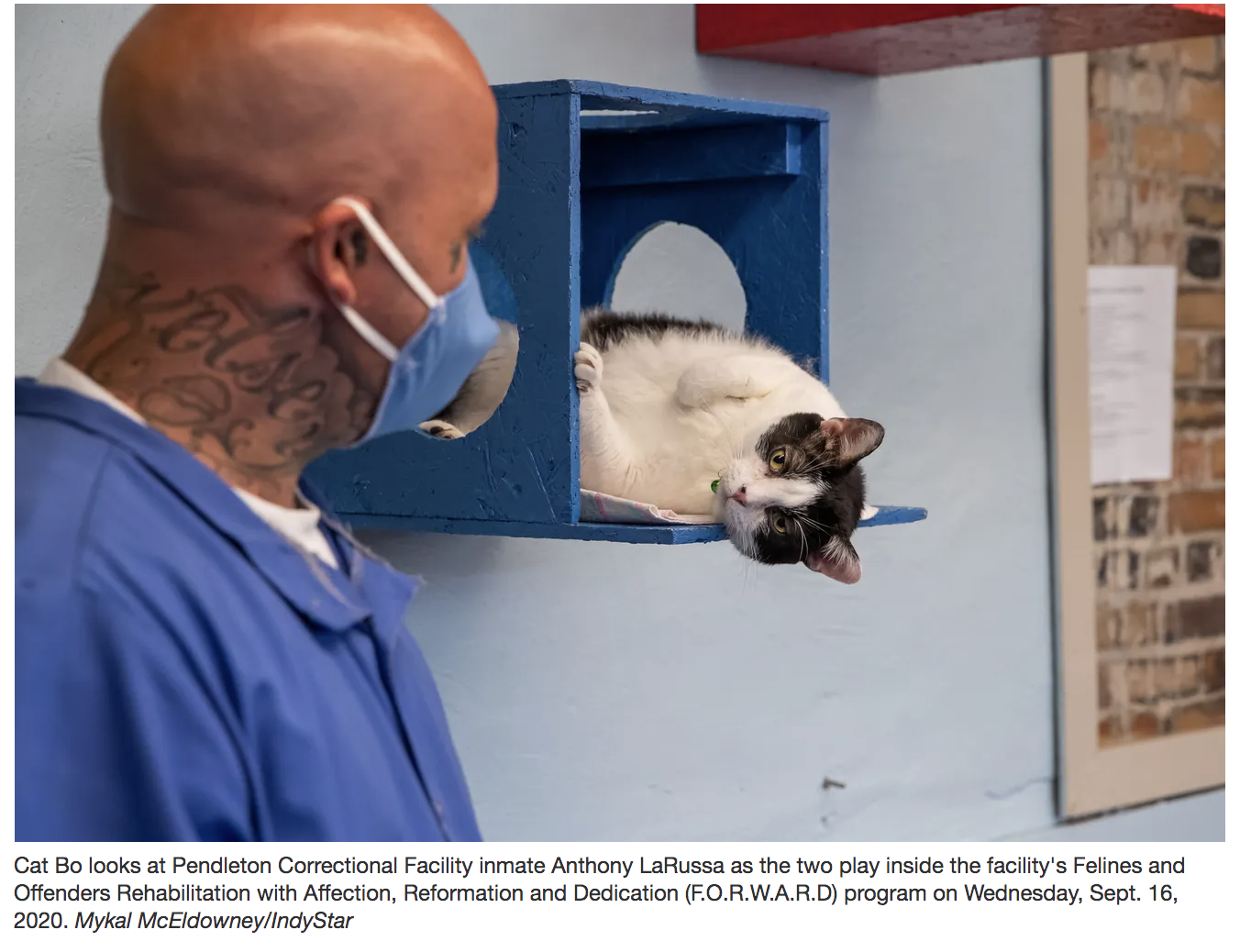 “They know these cats depend on them on a daily basis,” said Christina Conyers, an administrative assistant with the program. “It’s their human. They need them.”

The caregivers spend their days cleaning the cat sanctuary, changing litter boxes, and feeding and giving water to the cats. Everything but medical care is under the inmates’ purview –– trimming nails, brushing hair and cleaning ears are all among their daily duties.

The work, albeit behind prison walls, is a full-time job.

“I believe it’s changed me a lot,” LaRussa said. “I’ve grown, from even just the little time that I’ve been here until now. We’re all incarcerated. Whether you are selfish or not, you learn to care about something other than yourself. Now, it’s all about (the cats) and trying to help them in the best way possible.”

Attached are two pictures taken at what was Ernest Hemingway’s home in Key West, Florida and is now open for tours. The property has close to sixty cats, not all polydactyl.

The first picture is of two of the resident polydactyl cats making themselves at home on the bed that once belonged to Hemingway. 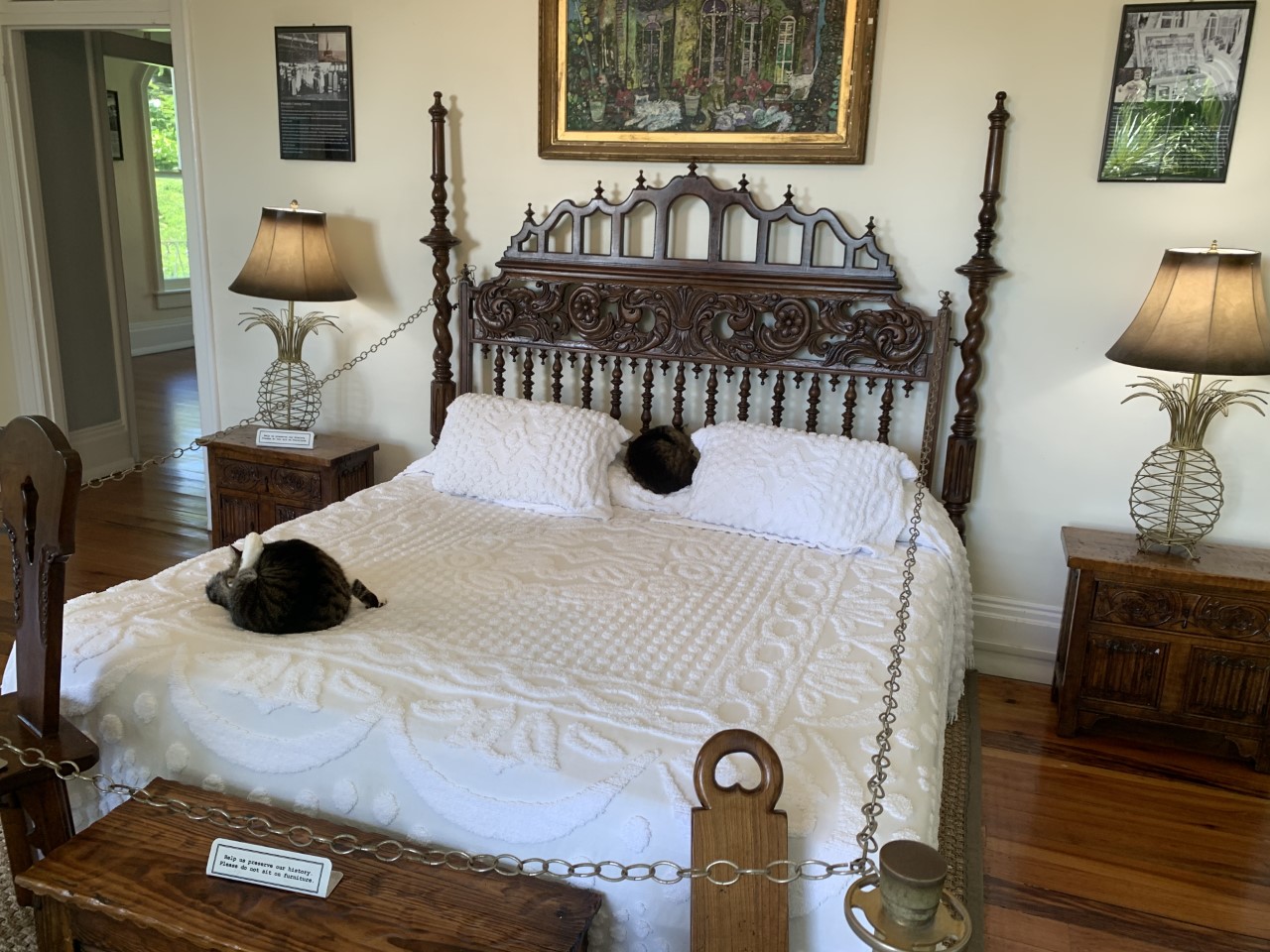 While not very clear, the second picture is of a polydactyl that has extra toes on all four paws instead of just the usual front paws. 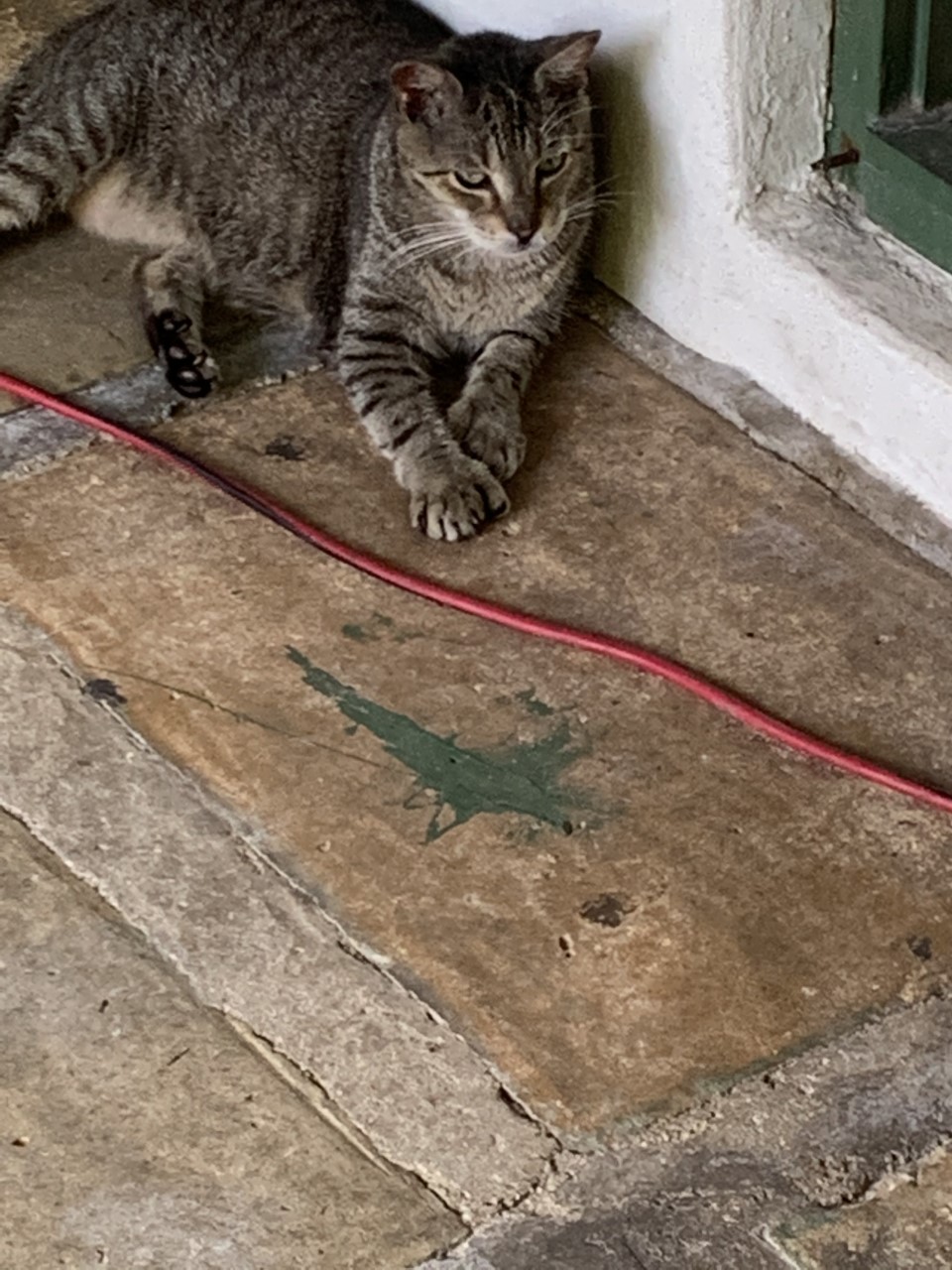 That reminds me of a joke that I made up. It has to be told verbally.