Yesterday I posted this video of “army ants attacking a hornet’s nest” and gave a hypothetical explanation for the hanging bridge: that some naturalist had looped a string from the edge of the roof down and up to the nest, allowing the ants to raid the nest for grubs by crawling along the string. As to why the ants didn’t crawl directly to the nest from the roof, I posited that the prankster had applied a slippery substance like Fluon® to the ceiling, over which ants can’t crawl. This hypothesis was actually devised by both me and my friend Phil Ward, a professor at UC Davis and ant expert.

That explanation didn’t seem all that satisfying to either of us, though, and Phil consulted an expert on army ants. The expert said that we were wrong, and provided what is undoubtedly the correct explanation—one that doesn’t involve human manipulation. The answer, quoted with permission, is below the video.

The expert today is Dr. Daniel Kronauer, a professor who works on neurobiology and ant social behavior at The Rockefeller University. He’s also the author of the book on army ants, which came out just this month.  You can go to its Amazon page by clicking on the screenshot below. 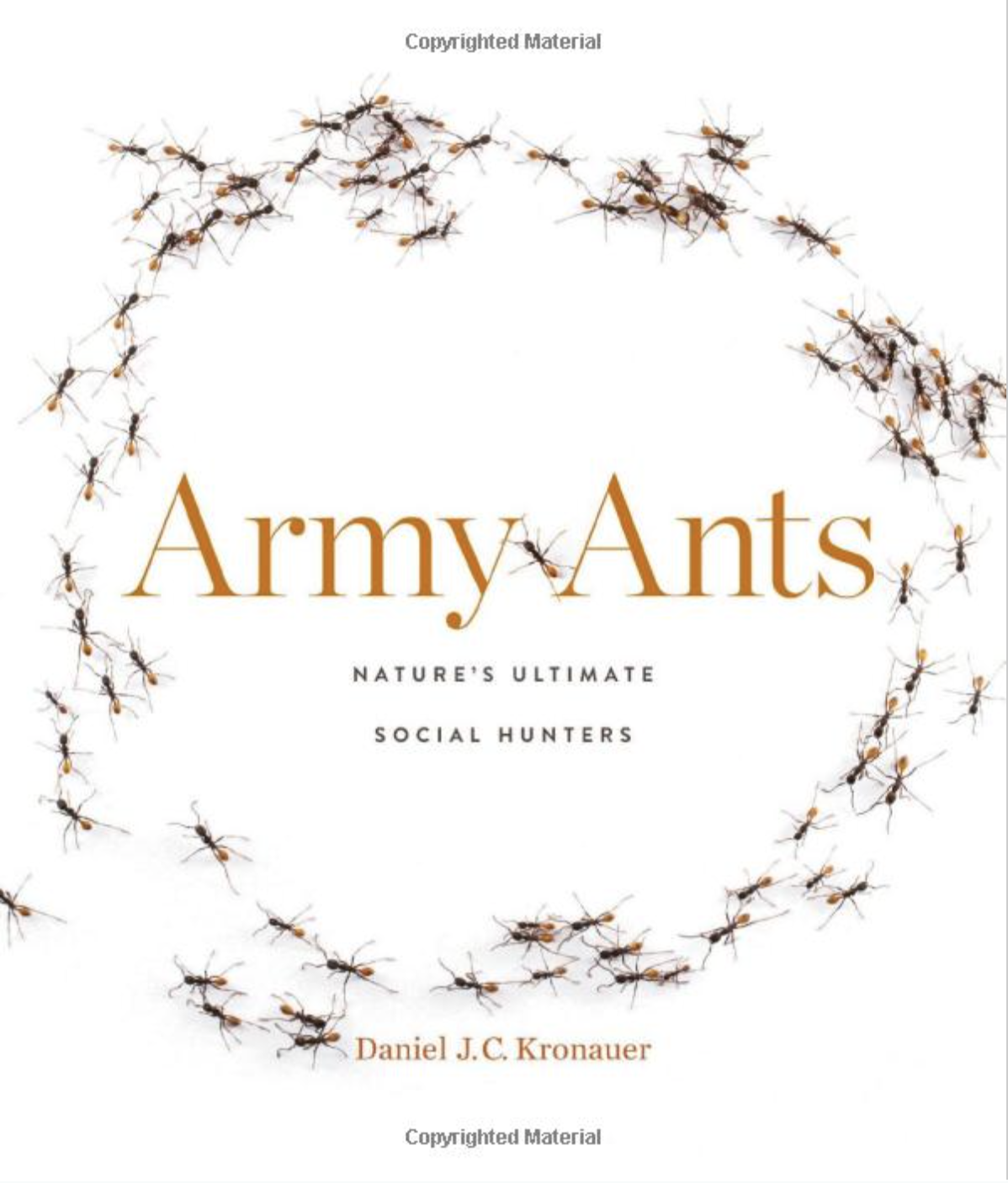 I’ll quote Daniel’s explanation, but first two of his corrections: 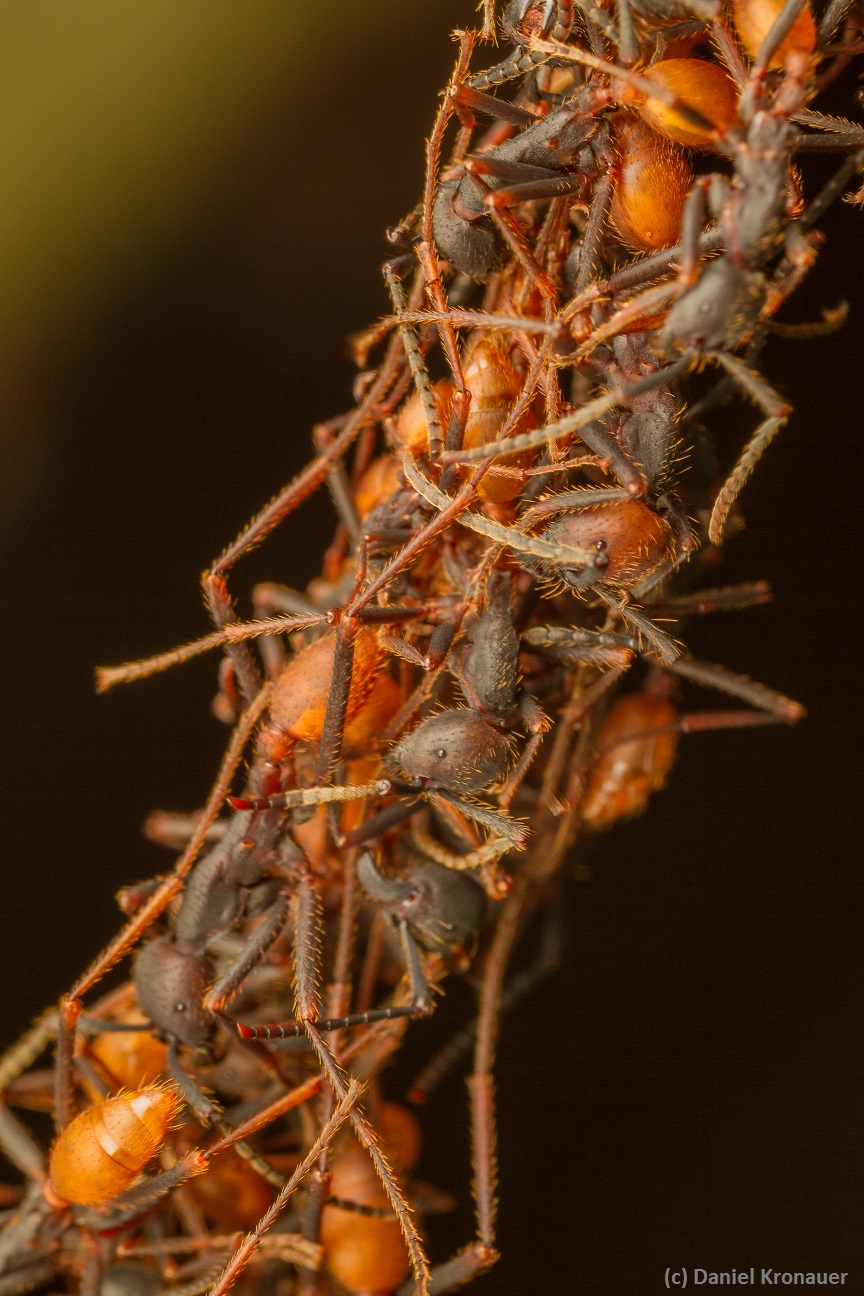 This video shows Eciton burchellii parvispinum, the dark “subspecies”, and was recorded on the Pacific side of Costa Rica. These kinds of ropes look cool, but, just like the army ant “death spirals”, I don’t think they’re adaptive. This is to say that they don’t make it easier for the ants to reach the wasp nest, and you never (as far as I know) see this in their natural habitat (where you don’t have smooth, horizontal surfaces like this).

But I’ve seen pictures of essentially the same phenomenon at other places, including, for example, on the bungalows at La Selva Biological Station in Costa Rica. What I believe happens is that the ants recruit strongly to a wasp nest, which are often located on these kinds of overhangs at manmade buildings. Under strong traffic over the smooth surface the ants start slipping and cling to each other, forming a small loop. Given the weight of this nascent loop, the sustained heavy traffic, and the slippery surface, the loop keeps extending, and ultimately you end up with a giant structure like this. Eventually this must either rupture or slowly recede as the traffic decreases.

After I got this, I emailed Daniel and asked him this: “What I don’t understand is how the loop starts in the first place so that it extends all the way from the edge to the nest and is affixed in two places.”

Daniel kindly responded with more detail and another photo:

As to your question: I think the loop can start pretty much anywhere on the flat horizontal surface. The way I imagine it is as follows: when army ants travel over slippery terrain, they form “flanges” out of their own bodies that facilitate traffic flow and prevent the walking ants from slipping. This scaffolding consists of ants that are connected to each other via little hooks on their feet (their tarsal claws). In the case of the video, I would imagine that the ants probably formed such a flange from the edge all the way to the wasp nest. Given how slippery the surface is, and that strong traffic like this must result in a lot of weight, the flange probably detached somewhere on the horizontal overhang. That gives you the initial loop, over which the traffic now flows. From there, it’s easy to imagine how the loop keeps extending: it constantly thins out and more ants attach, extending it downward. At the same time, the end points keep migrating as the flange detaches further from the horizontal surface, until they reach points where the ants can firmly attach (in this case the edge of the roof and the wasp nest).

I’ve never seen the ontogeny of such a structure, but at least in my mind this makes sense. Imagine you had a line of some stretchable material attached to your ceiling that is firmly attached only in the two corners. Now this line becomes detached somewhere, just for a few inches. Over time, the weight of this loop would stretch the material out, and its weight would pull off more and more of the line from the ceiling. The detachment points would then migrate until they reach the corners and the line is otherwise completely detached. I’m sure there’s a much better description of this in physical terms, but this is the best analogy I can come up with right now.

I’m attaching a photo of a natural Eciton burchellii flange. The ants are traveling over the intersection of the two branches, and have constructed flanges on both sides of the intersection. If you imagine that the flange on the lower side were much longer and the surface much smoother, you can easily see how it might become detached at some point. 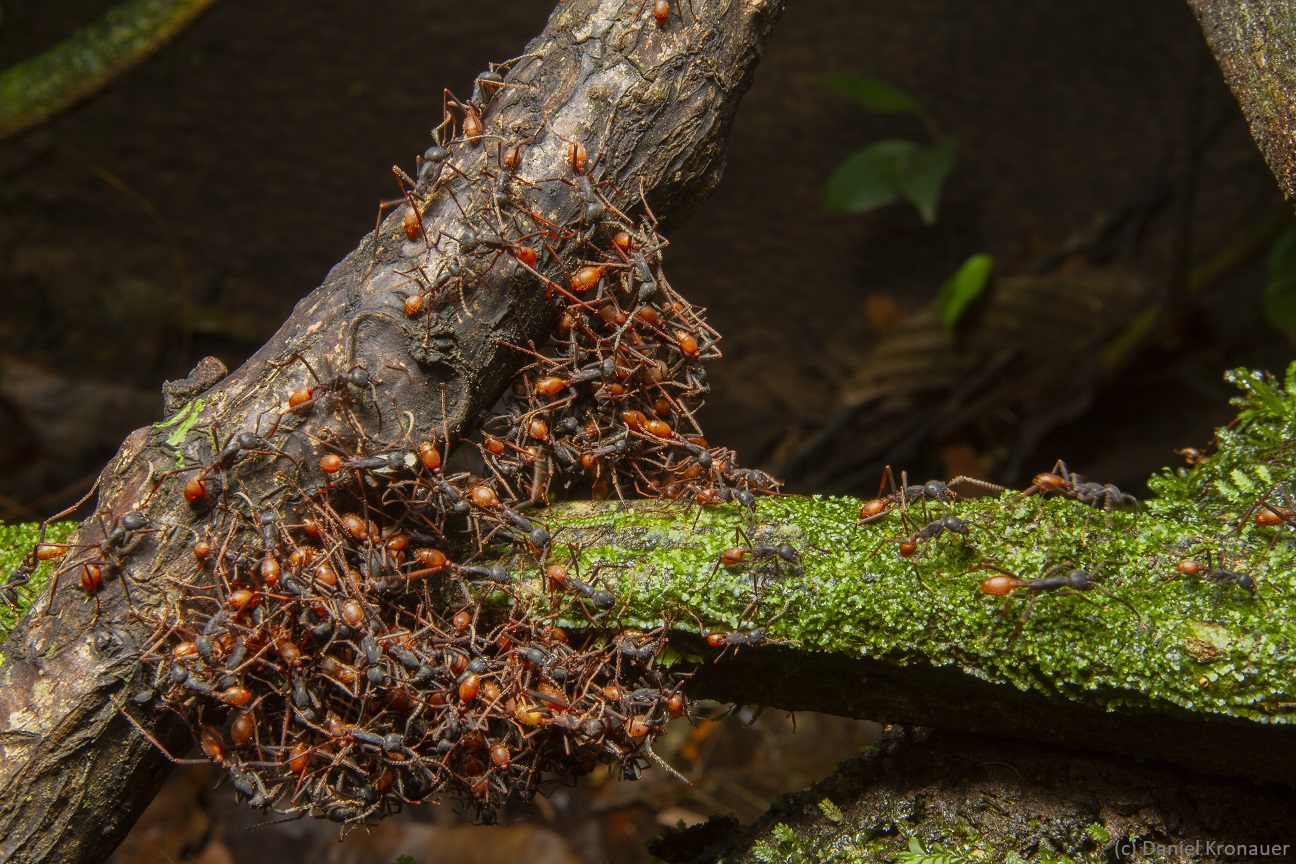 Thanks for Daniel and Phil for solving the puzzle.

21 thoughts on “An explanation for the “hanging ant bridge””